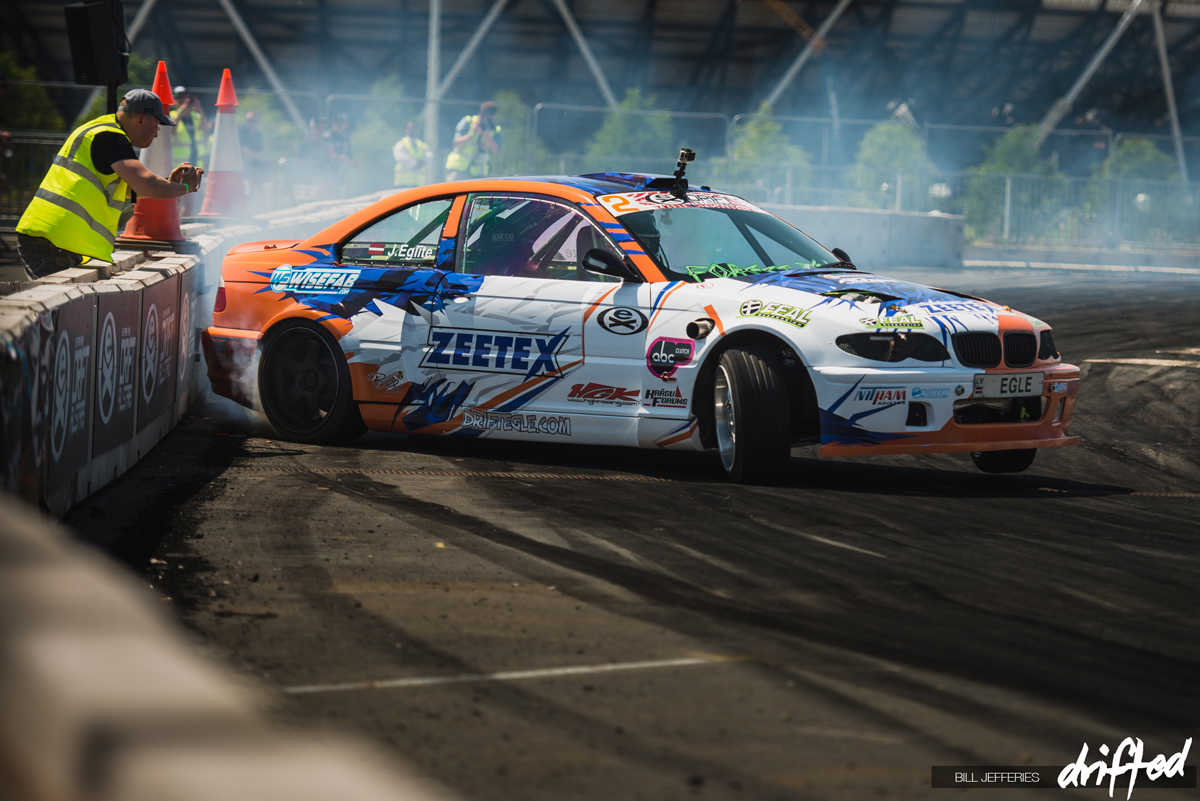 As part of our ongoing quest to absolutely smash 2015 out of the park we’re expanding the Drifted media team and adding some fresh blood. This year is shaping up to be huge for the site, so we’re equipping ourselves with the talent to do it justice! Honest moment coming up - the world of drift media is oversaturated at the best of times, so finding the right people who fit within the ethos of Drifted isn’t as easy as dipping your hand into a hat filled with names.

Not to do a disservice to the skill of motorsport photography, but with modern cameras as advanced as they are, getting a sharp picture of a car flying sideways with some attractive blur going on in the right areas is achievable for pretty much anyone who can hold a camera, dial in the right numbers and point the thing in the general direction of where the noise is coming from. There’s more to drifting than just cars going sideways; there’s raw passion, gritty emotion, blood, sweat, tears and incredible moments. Capturing these fleeting seconds takes more than just technical ability, it takes awareness, understanding and instinct.

The first member of our 2015 line-up is a chap that I’ve had the fortune to shoot alongside a few times in the past, and someone who’s work I’m sure you’re familiar with if you’ve ever perused Wangan Warriors (if you haven’t, you should!). Despite having only been invovled in drifting for a relatively short period of time, Bill Jefferies’ images always grab my eye when they pop up on social media and he has a style that fits in perfectly with Drifted’s aesthetic of letting high quality images tell the story. I’ve waffled on enough, so I’ll let Bill introduce himself…
Jordan Butters, Editor

Bill: It’s awesome to have been given the opportunity to write my first article for Drifted viewers! After being a long-time admirer myself, it came as a really nice surprise to be asked to join the team recently. 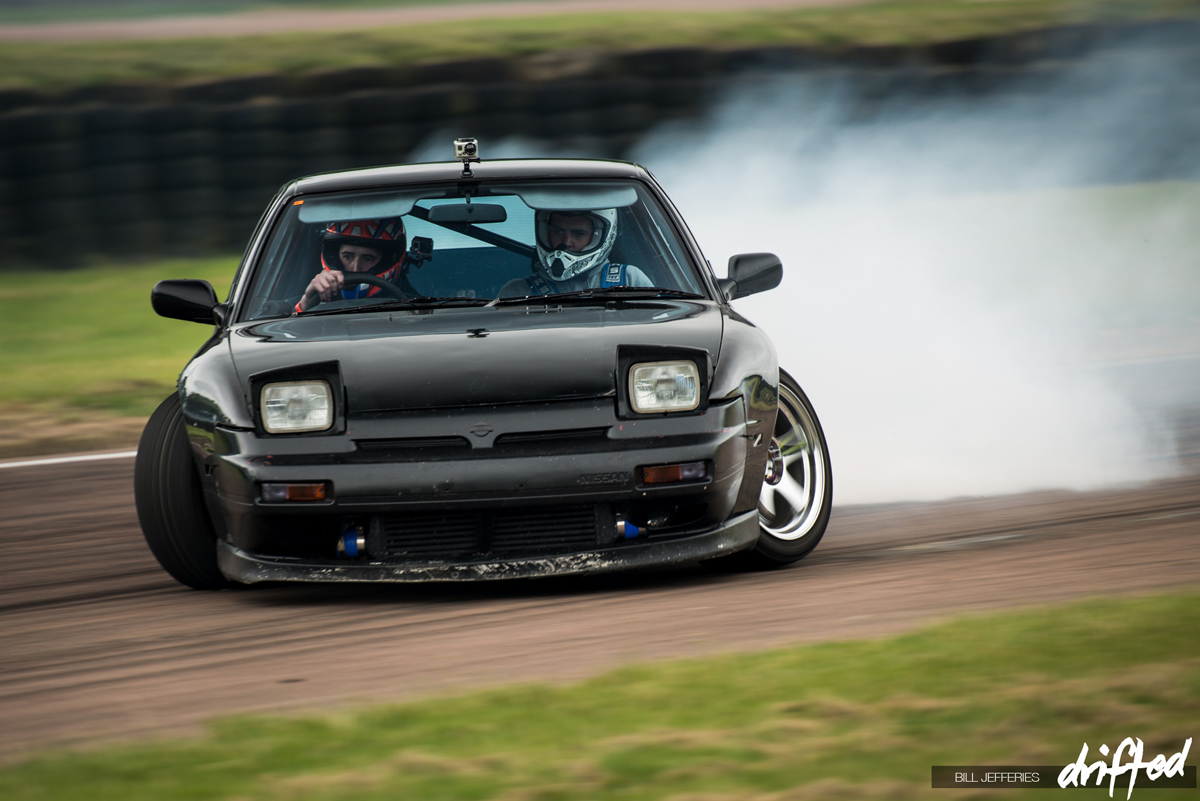 My first introduction to drifting was via file-sharing networks, downloading my latest fix on dial-up speeds and enjoying every second of all the awful quality videos from the motherland. My first real-life introduction to the UK scene was at Awesomefest 2011, those of you who attended will remember how much of an epic weekend it was! 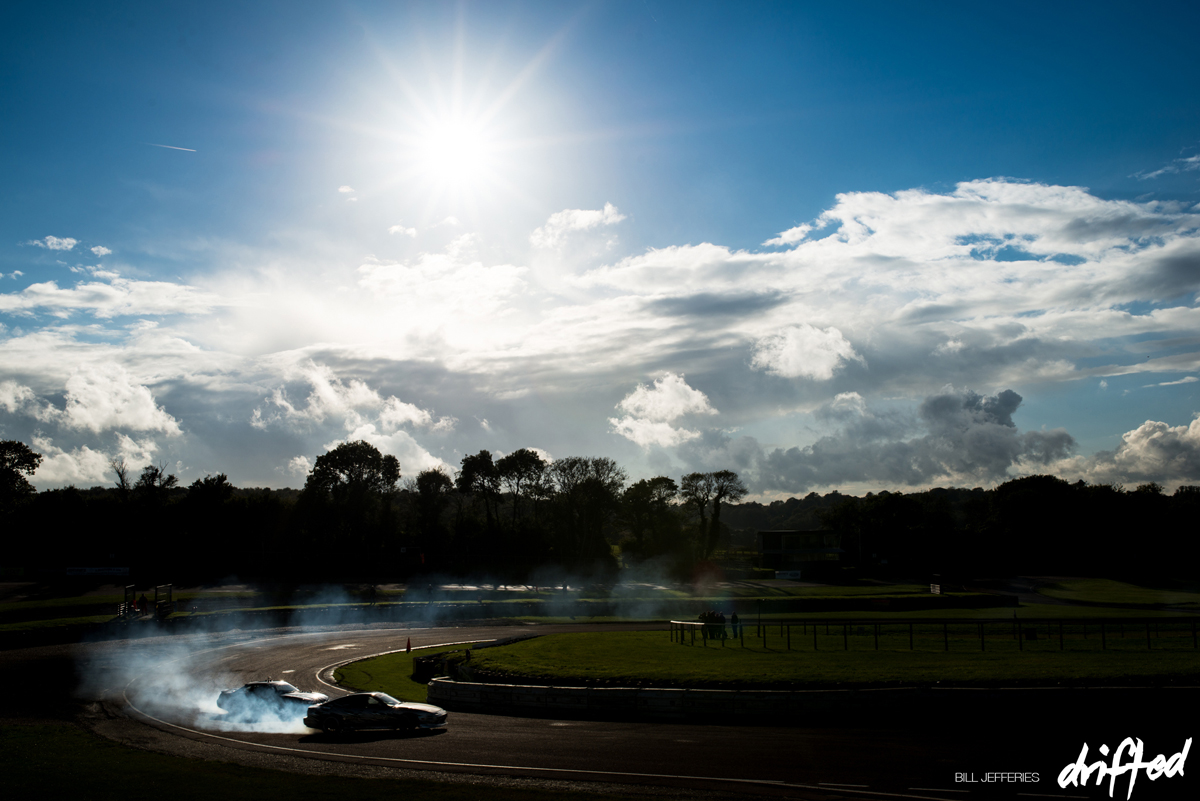 From then on I was hooked. I knew that eventually I wanted to be media side, getting shots of the crazy action that I was being spoiled with. It wasn’t until a while later that I actually bit the bullet and purchased a DSLR, from there on I haven’t been able to put the camera down! 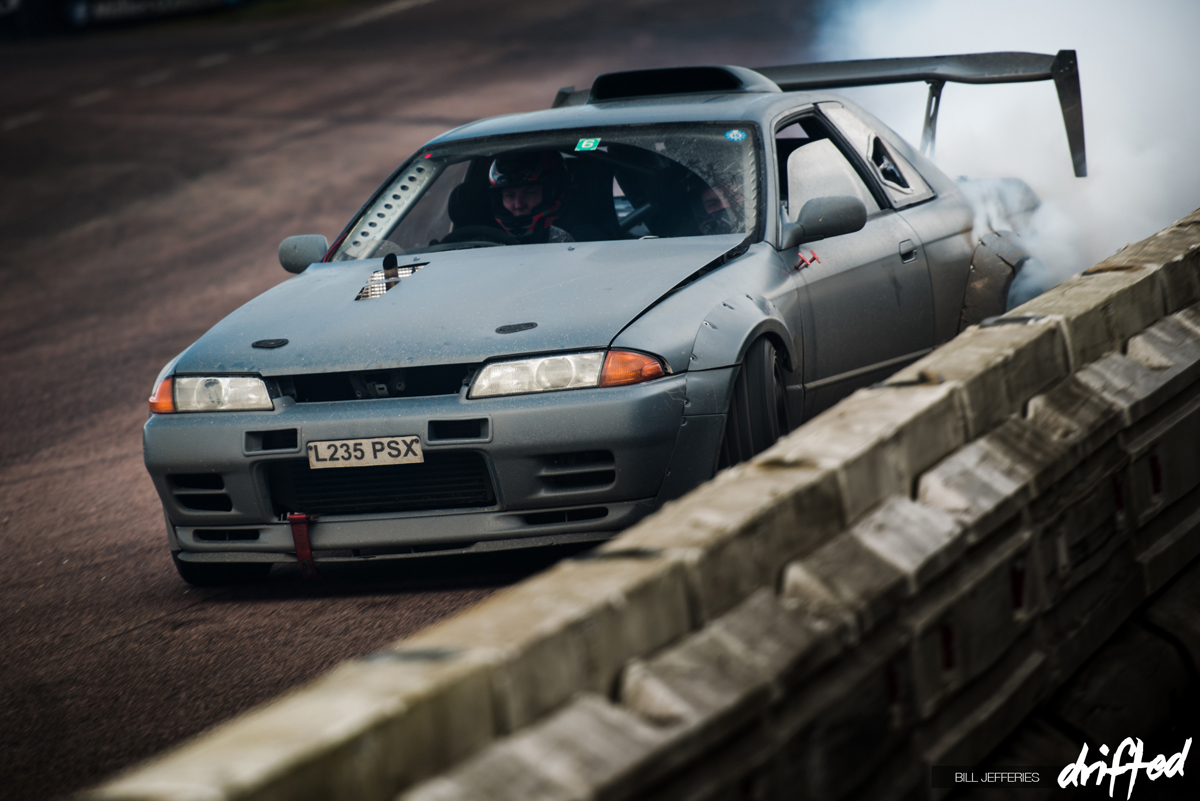 Most of you may have seen my work by now one way or another, but for those of you who haven’t I’ll introduce myself. I started up the Eyedea Media Facebook page nearly two years ago - it was an opportunity to share my work via social media and get my work seen by those who were interested. 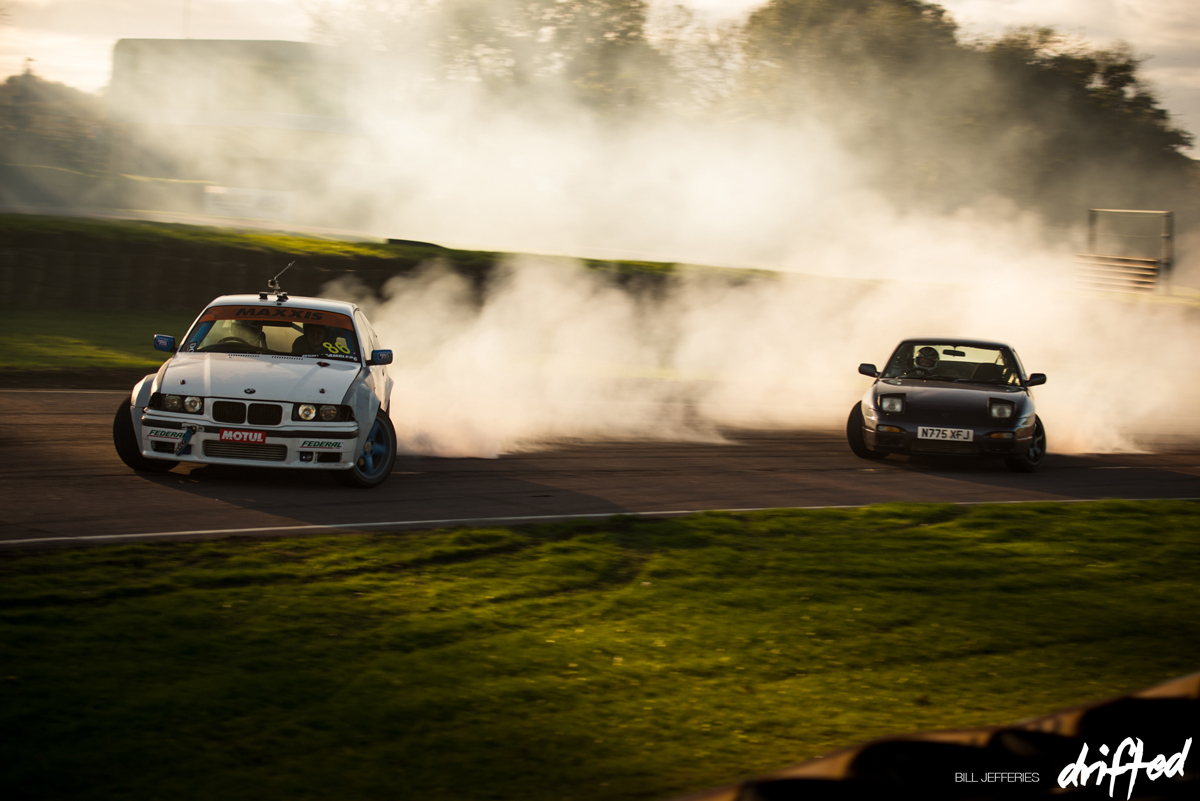 After a while of uploading shots from drift days and events that I was attending I caught the eye of the Wangan Warriors team and was offered a place shooting for them. With the huge amount of help from the team at WW, I realised there was so much more that I could show the viewers from each event that I was attending.

It’s so easy to attend an event and shoot as many sharp pans of cars driving insanely as you can throughout a weekend, it’s the simple way, and you’re guaranteed to get work that you’re (hopefully) happy with. 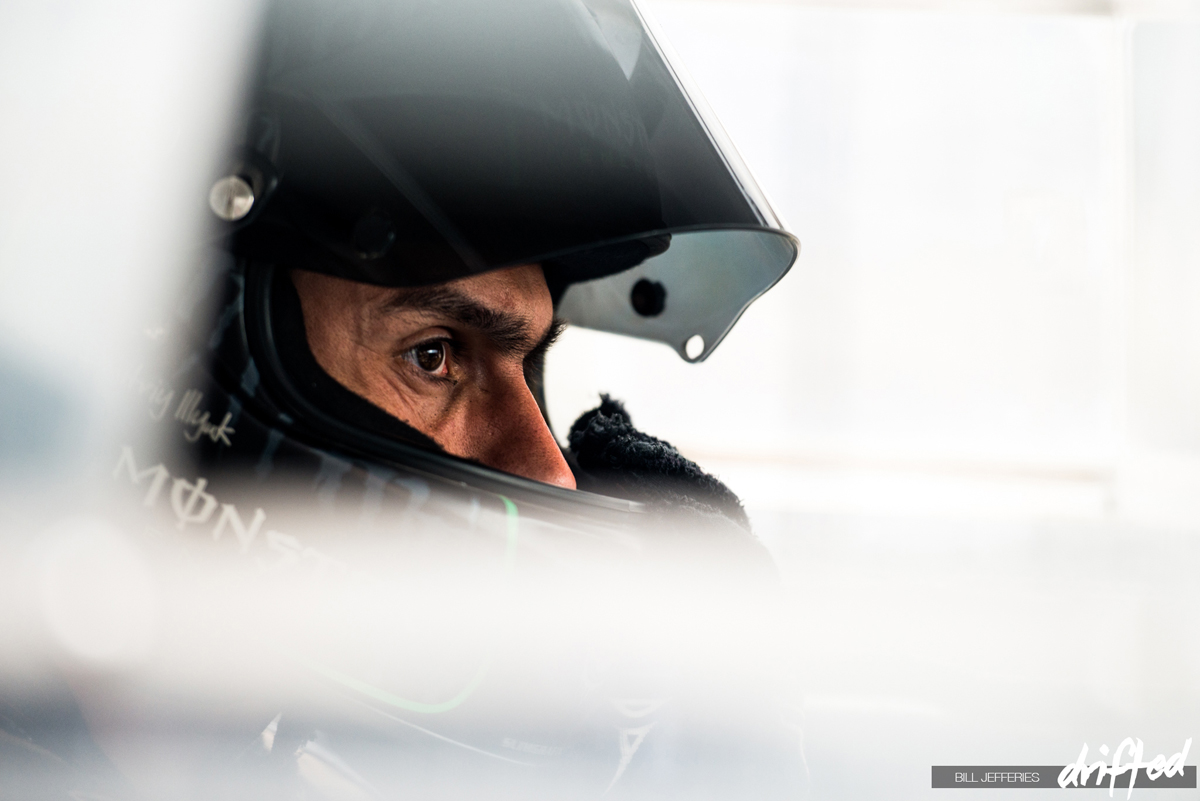 However, you soon realise that there’s so much more to really appreciate at an event than just shooting a car going fast. You start to get the real feel of the event. There’s passion, emotion, anxiety and so many small details that are easily overlooked when transfixed by smoke and noise. 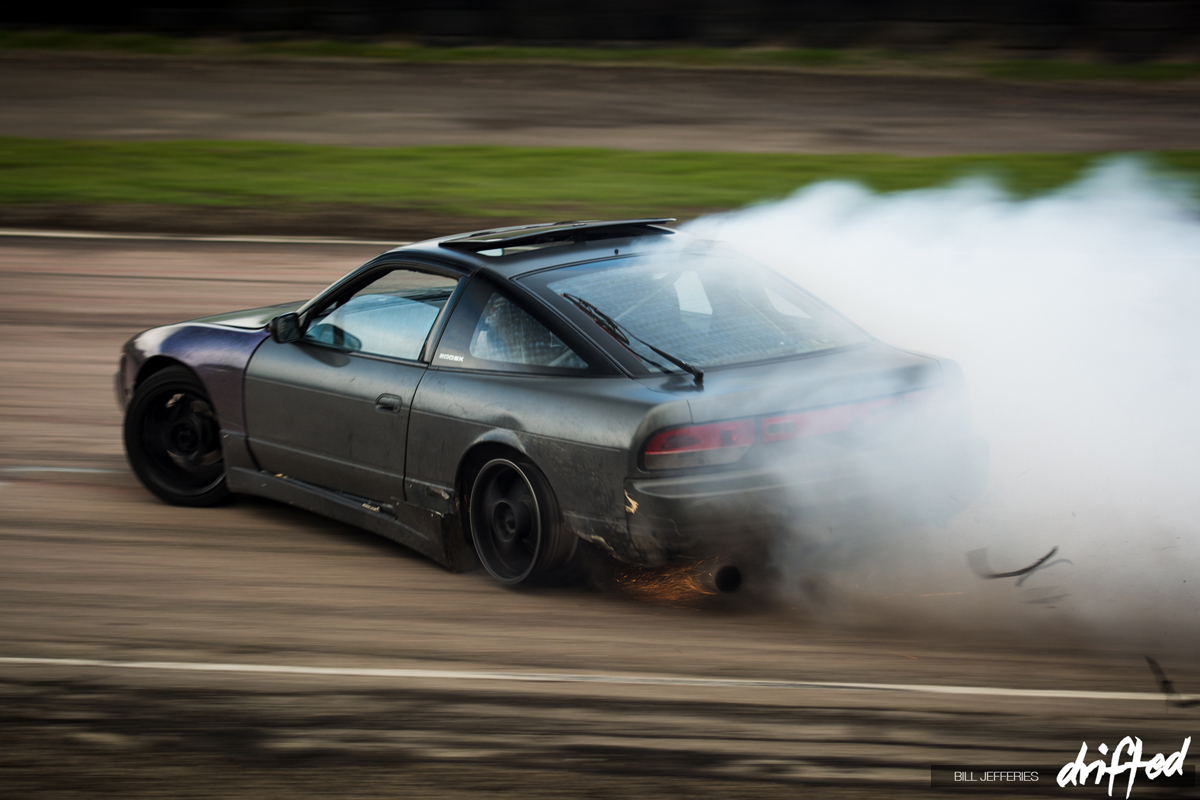 Once you’ve adapted to realising that you might not get 500+ shots of each event that you’re happy with, you’ll start to realise the true meaning of quality over quantity. You’ll be in Lightroom editing your photos with a big grin on your face and the rewarding feeling that you did something new rather than standing in the same spot the entire day! 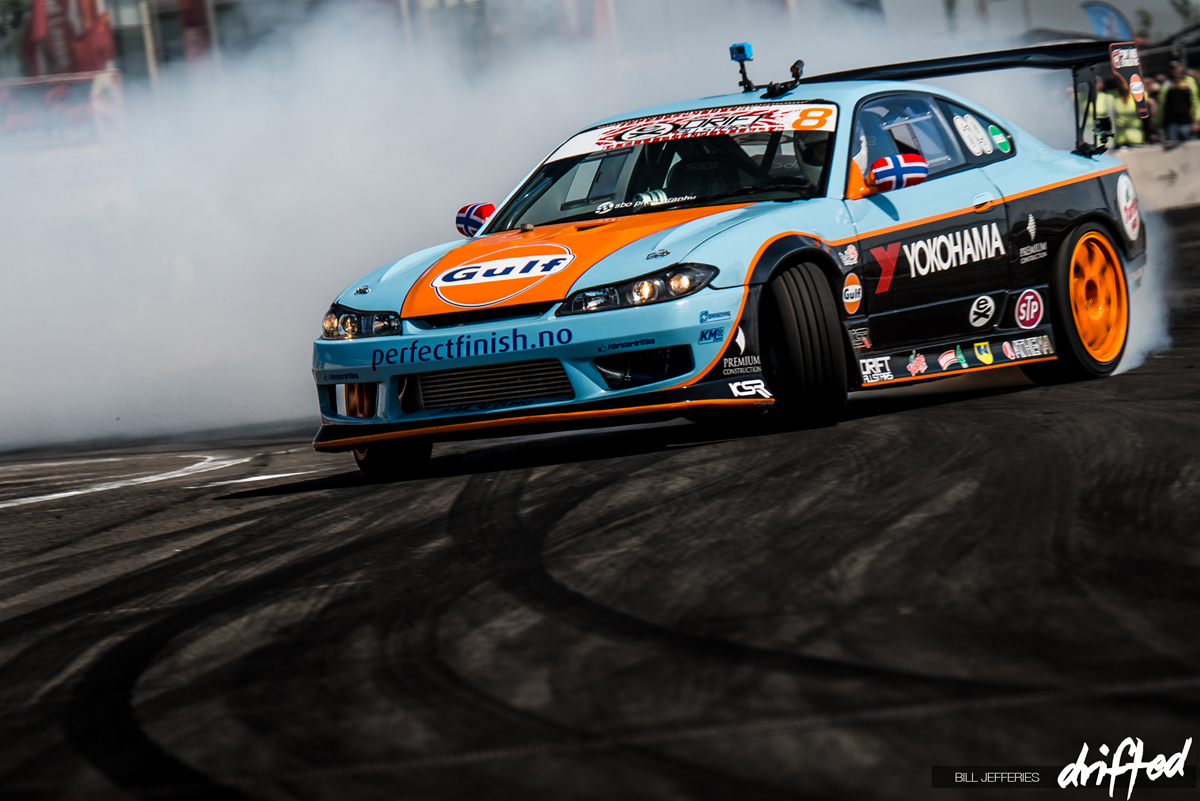 I always try to take this mentality with each new event I attend, trying to find that different angle and get myself to the place where no-one has yet ventured. In doing this, I’ve often ended up bumping into Drifted’s own Jordan Butters. It’s always hard to find an angle that he hasn’t already beaten you to! 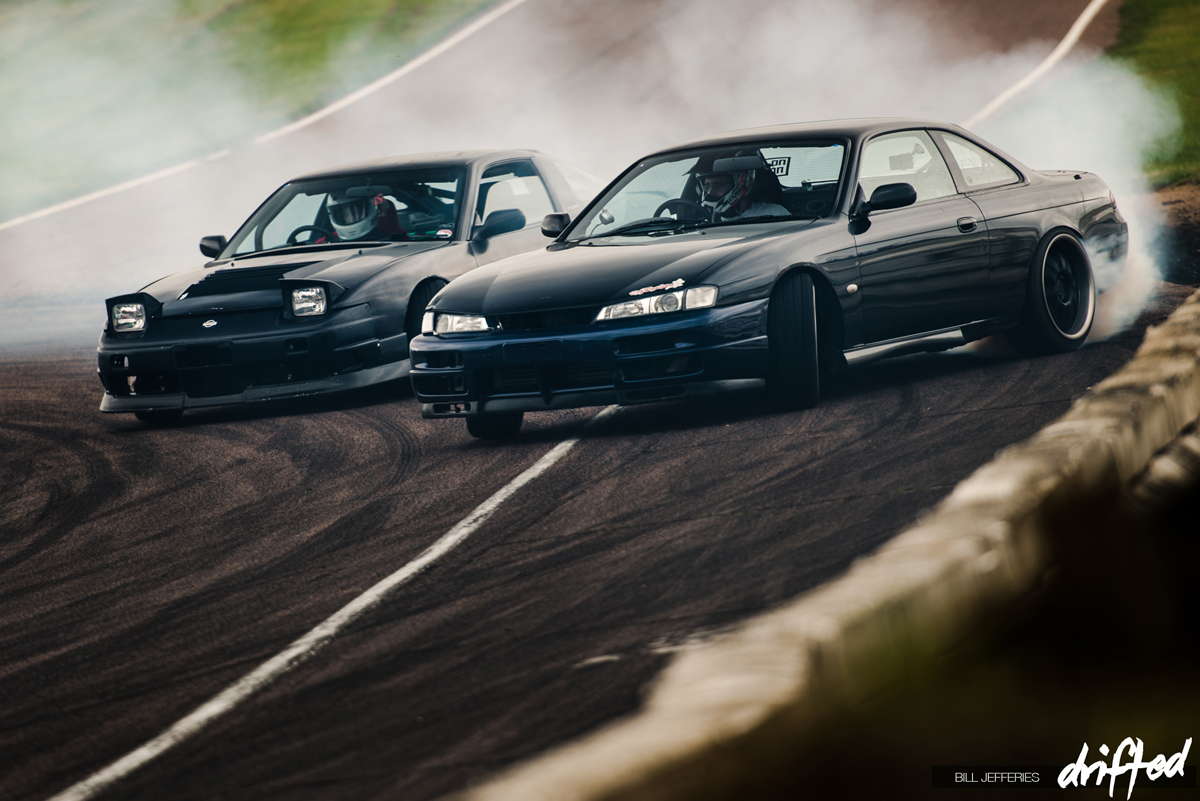 When I’m not busy absorbing myself in the action going on around me, it’s nice to have a laugh and a chat with likeminded people. I’ve always been an admirer of Jordan’s work, and I look forward to the increased opportunity to shoot alongside him in the near future. 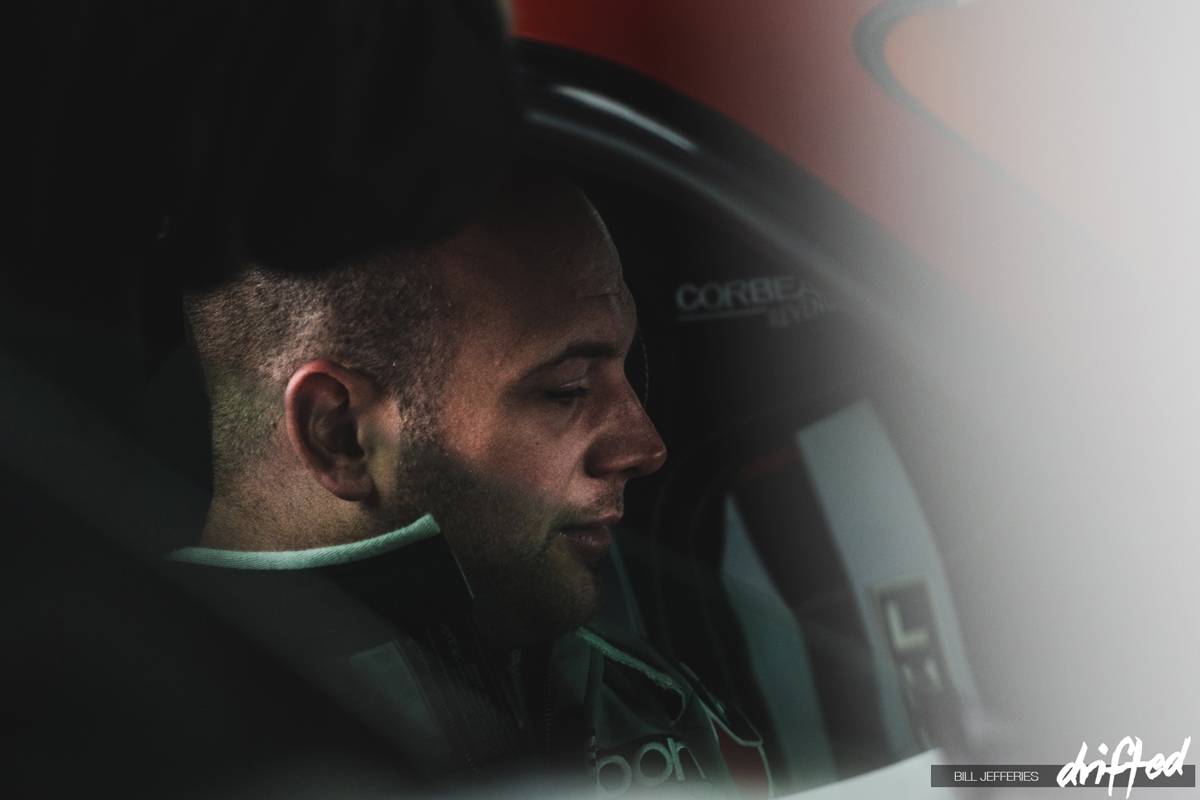 With just a month to go until the British Drift Championship season kicks off, it’s always exciting to see the new builds taking shape. With the series undergoing a redesign this year, I feel that it could be a shake-up which will see the series improve for the better. I look forward to attending the first round at Lydden Hill in April. 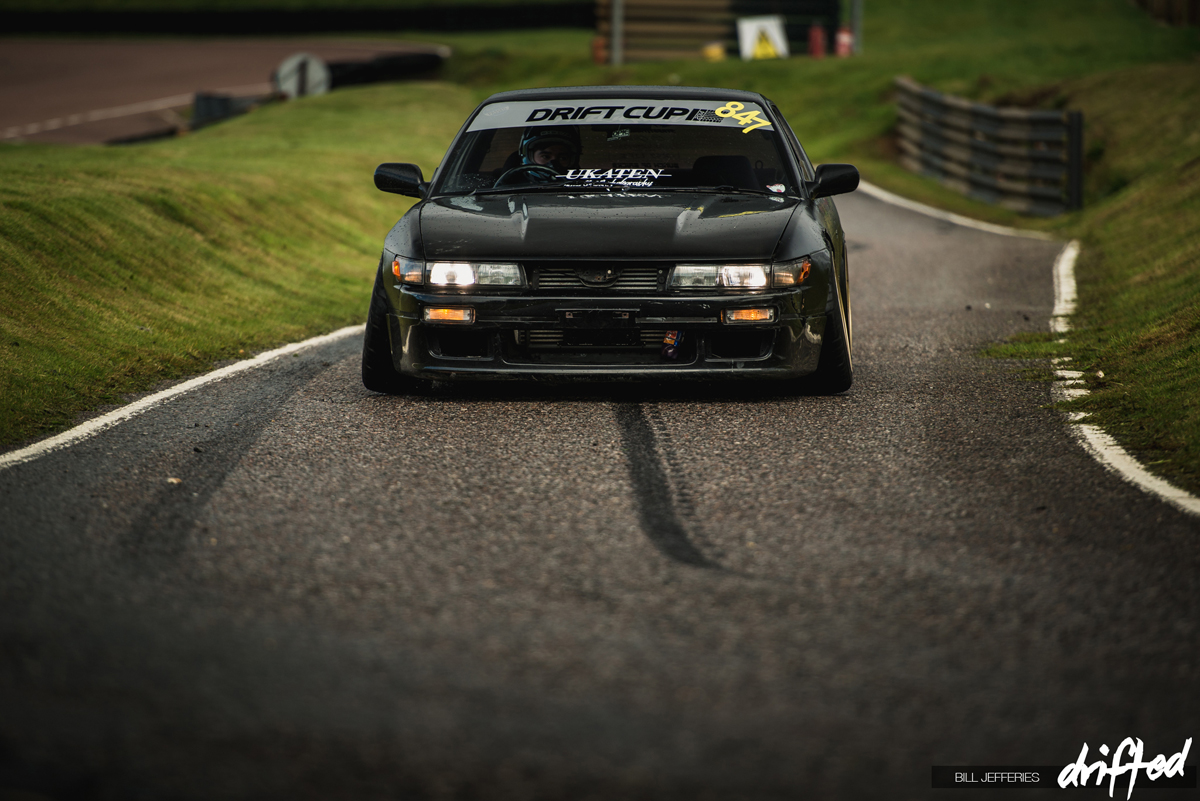 I also hope to attend as much of Driftcup as possible, last year was really interesting and it was great to see street cars get the opportunity to compete. Despite being a competitive event, people seemed to be having more fun than any other competition I’ve seen to date, I worry that the light-heartedness of it may disappear this year with the requirements for roll cages and the limits to driver entries. I hope to be proven wrong! 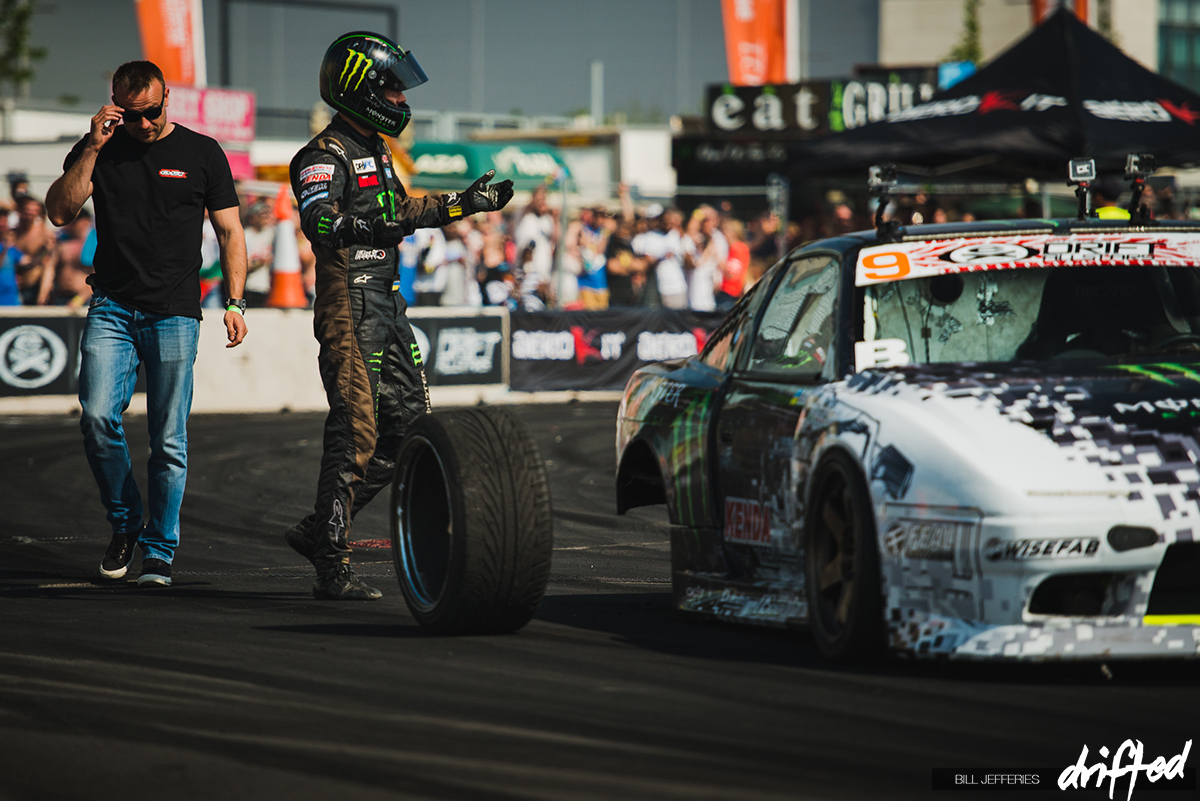 Drift Allstars in London was the craziest event I attended last year, despite being the most damage-inflicting track I’ve seen to date, it was fascinating watching the cars on a street track which pushed them to their limits in just about every way! This will be another event I really hope to shoot this year. 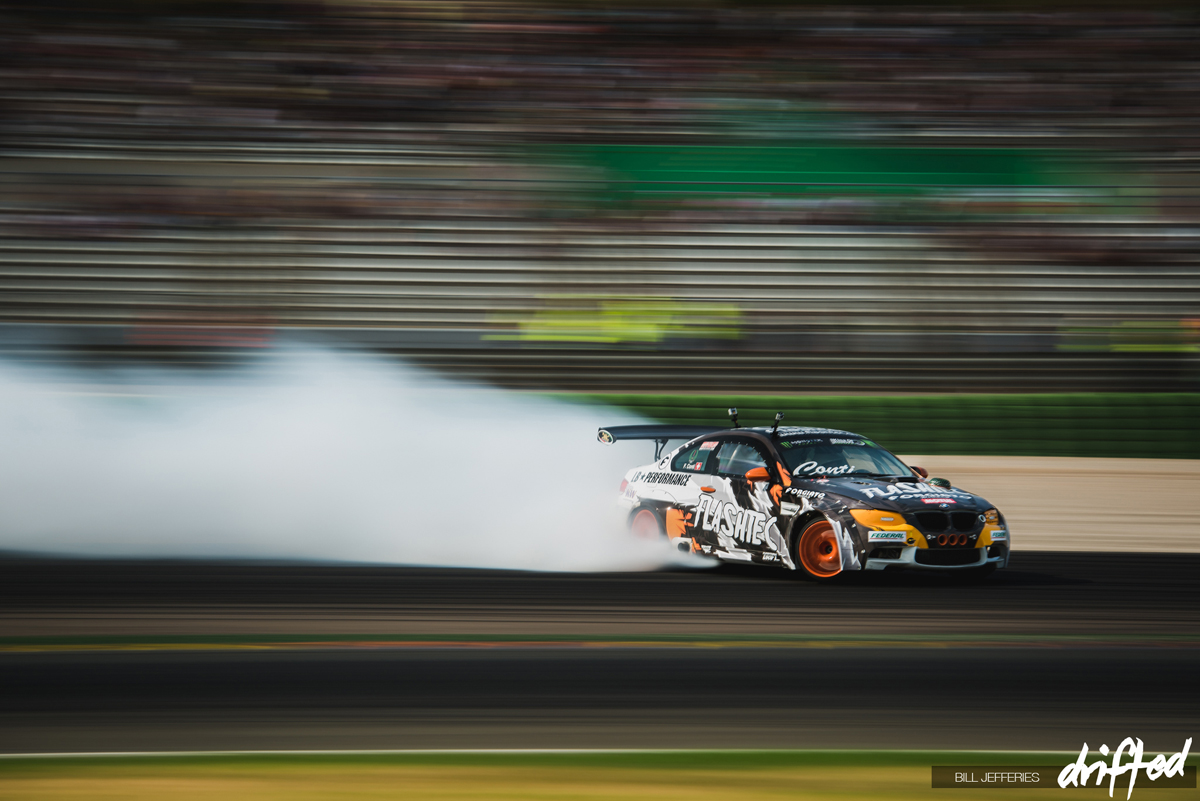 I also provided coverage for King of Europe in 2014. The series paid a visit to my local track at Lydden Hill, and being the first year there I could tell that KoE had far more to offer. As the season came to a close, I had a few spare days of holiday in my calendar. I had the tough choice of visiting rainy Wales for the end of the BDC, or sunny Valencia. Needless to say I didn’t take much convincing and before I knew it I was boarding a plane. 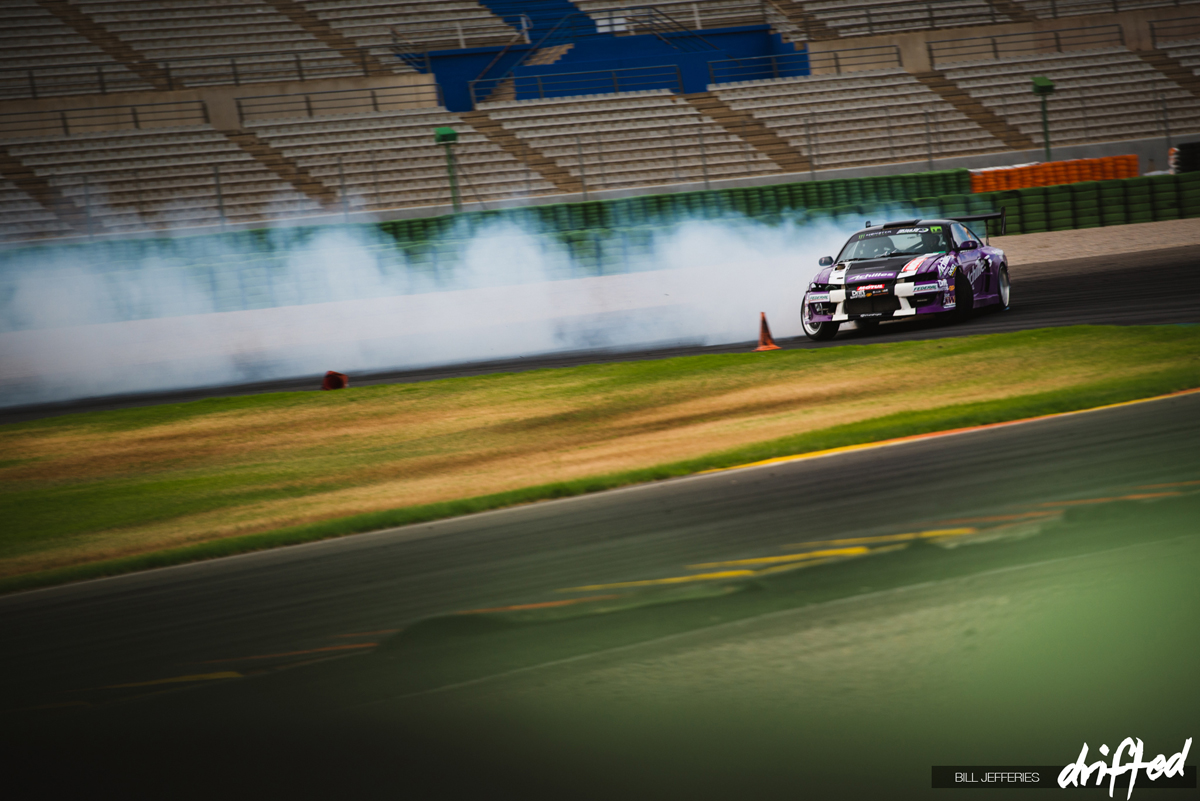 This would be my first time shooting drifting abroad, I absolutely loved every minute of it. There’s always something pleasing about being at a new location, with so much to discover and appreciate. When the place in question is a well-kept MotoGP circuit, it helps too! I look forward to getting the chance to get abroad much more this year.

The coming year will also see me get an opportunity to tick yet another item off my bucket list. Having booked my flight to Gatebil 2015 I am expecting that to be an extremely memorable weekend (or maybe not so memorable at times!). Either way, I can’t wait to get out there and experience the event I’ve heard people raving about for years. 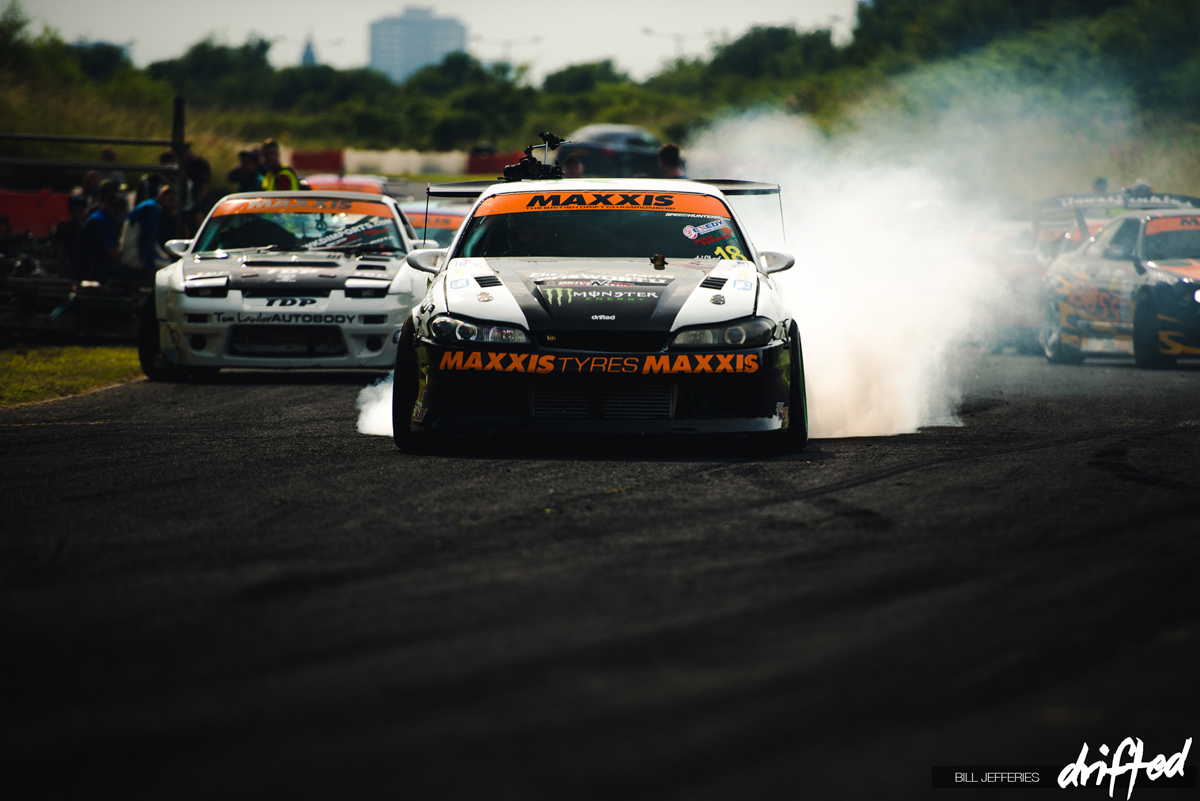 Needless to say, there’s certainly no shortage of excitement leading up to this season. I think it’s going to be an interesting year for drifting in general. BDC will be gaining a livestream for the first time, King of Europe will be extending to Asia and joining forces with some of the biggest drivers and names in drifting. I can’t wait to see where the year takes me, and I look forward to sharing my content with you all here on Drifted!