How to Maintain Deep Cycle Batteries

Deep cycle batteries may be able to deliver the same level of power until they’re almost depleted, but you shouldn’t let them get depleted. In fact, they shouldn’t be allowed to go below 20 percent charge.

Otherwise, the thicker lead plates in deep cycle lead acid batteries will generate excess heat from internal resistance when you try to recharge it. Ideally, it should be recharged when it hits a 50 percent charge.

Regular recharging of the batteries will also prevent stratification. That’s when the acid in the battery seeps to the bottom of the battery, limiting the activation of the plates the next time you recharge it.

The immediately solution is to stir the electrolyte mechanically. You can prevent stratification by letting the battery slowly diffuse power once in a while, too, before recharging it.

Tip 2: Store at Low Temperatures – But Not Too Low

Store the batteries at a lower temperature to extend battery life. This means storing them in a shady garage corner, not out in the sun. However, the batteries should not be allowed to literally freeze. This will destroy the battery. Don’t refrigerate deep cycle batteries, either.

Most manufacturers explicitly say not to do this, because the batteries need to be at room temperature to reach maximum voltage. 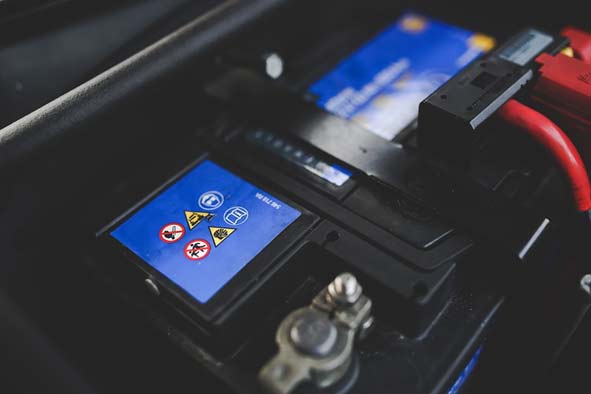 Tip 3: Be Aware of the Fire Hazards

Overcharging any battery can cause battery damage, leakage of electrolyte from an expanded case or an outright explosion. This can happen if the battery experiences a short circuit that creates a large current, too.

Note that deep cycle batteries can release a lot of hydrogen when overheated or over-charged. This creates even more flammable hydrogen gas than a conventional battery that’s overcharged. This is why you don’t want to have any sparks or anything flammable around a recharging battery.

This is even true of “maintenance-free” batteries, since a blocked valve or faster fume generation than the valve can handle will cause an explosion.

Inspect your batteries regularly. Add water and check electrolyte density in lead-acid deep cycle batteries. Check their condition and temperature, too. Do not try to charge the battery if the battery feels hot or the casing seems swollen.

And don’t make the mistake of assuming the safety measures in the battery charge controller will save you.

That’s why we recommend never letting it die in the first place. If you try to recharge it at that point, the expanding sulfate crystals will crack the battery plates.

However, we do sometimes end up letting a battery totally dissipate before we can recharge it. This is why you want to desulfate the battery if possible.

Some battery chargers have a battery de-sulfate mode. That mode will pump about 20 percent extra voltage through the battery to reverse the sulfate crystal formation for a limited period of time. This is long enough to restore the battery chemistry but not long enough to over-charge it and damage it.

You can also use a specialized battery desulfator. Just don’t do this to a battery that’s literally frozen, been discharged for a long time or is already over-heated.

This is a good reason to have a backup battery on the charger you could install instead in your boat, golf cart, RV or wheelchair. This is aside from periodically cleaning the terminal connections and cables.

Tip 7: Equalize It Once in a While

We’ve already mentioned how batteries should be fully charged and have that done regularly to keep the electrolyte in shape. You also need to do an equalization charge regularly, ideally every ninety days. An equalization charge is a low current charge applied after the batteries are fully charged. This will extend the charge time, but it will keep the cells balanced.

Fail to do this, and you could get instability in the cells where some perform worse than others. Eventually, that leads to battery failure.

Note that this advice is only true if you have flooded batteries. Don’t equalize lithium batteries.

Deep cycle batteries share a few maintenance tips with conventional batteries. However, there are other forms of maintenance you have to do to get the full power out of these batteries when you’re ready to go.