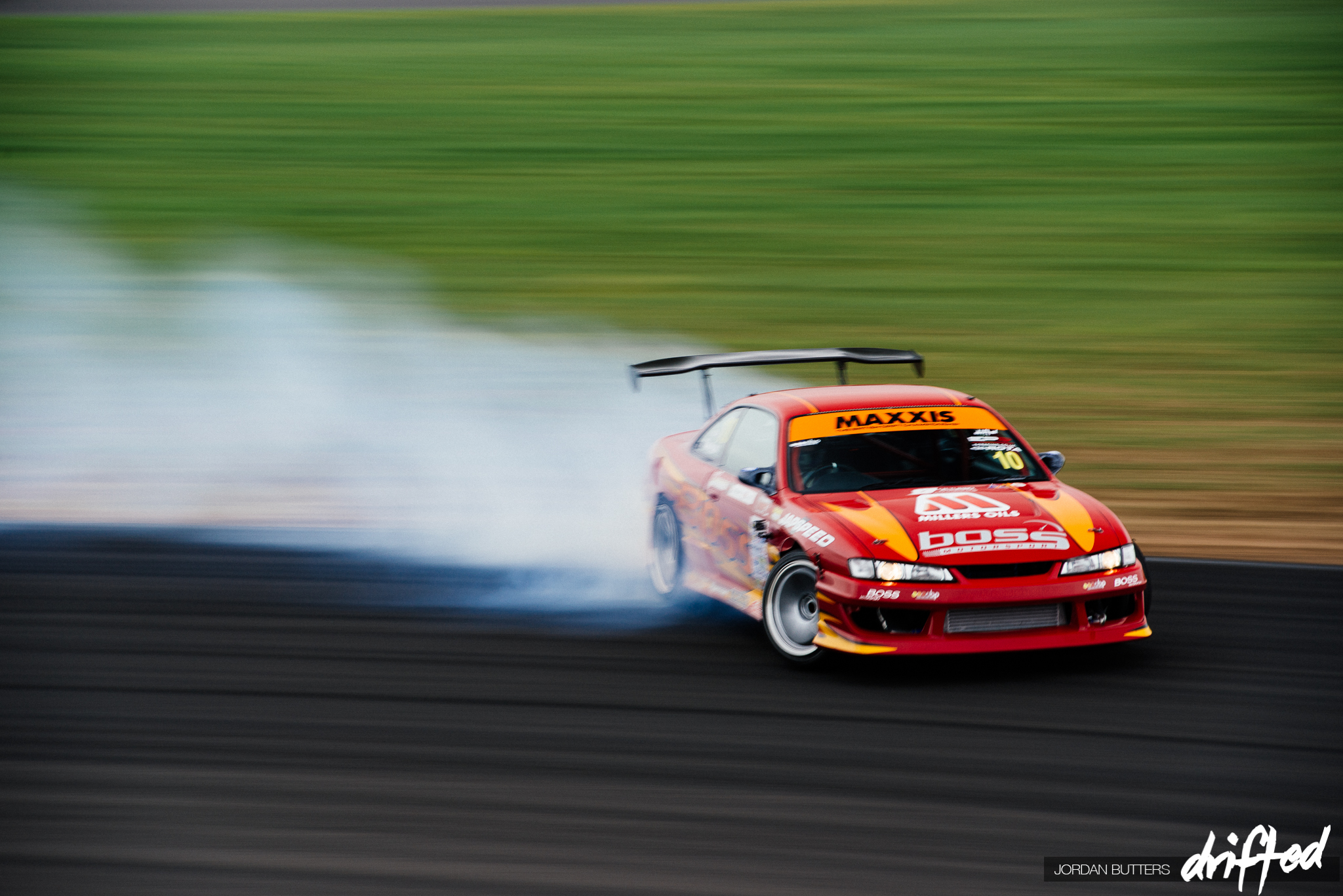 Ahead of this weekend’s annual Autosport International show in Birmingham, the folks over at the British Drift Championship have announced news of changes to their classification system for the upcoming season. Three classes become two as the Semi Pro class is done away with, knocking driver numbers down to around 100 (from 120). This can only been good news for fans and drivers!

Another notable change is the British Drift Championship logo, now absent from the Maxxis branding that has been present for the past few years. The new logo can be seen on the BDC Facebook page.

The full release from the BDC team can be read below, and we’ll bring you news of the upcoming 2015 schedule as soon as we have it. 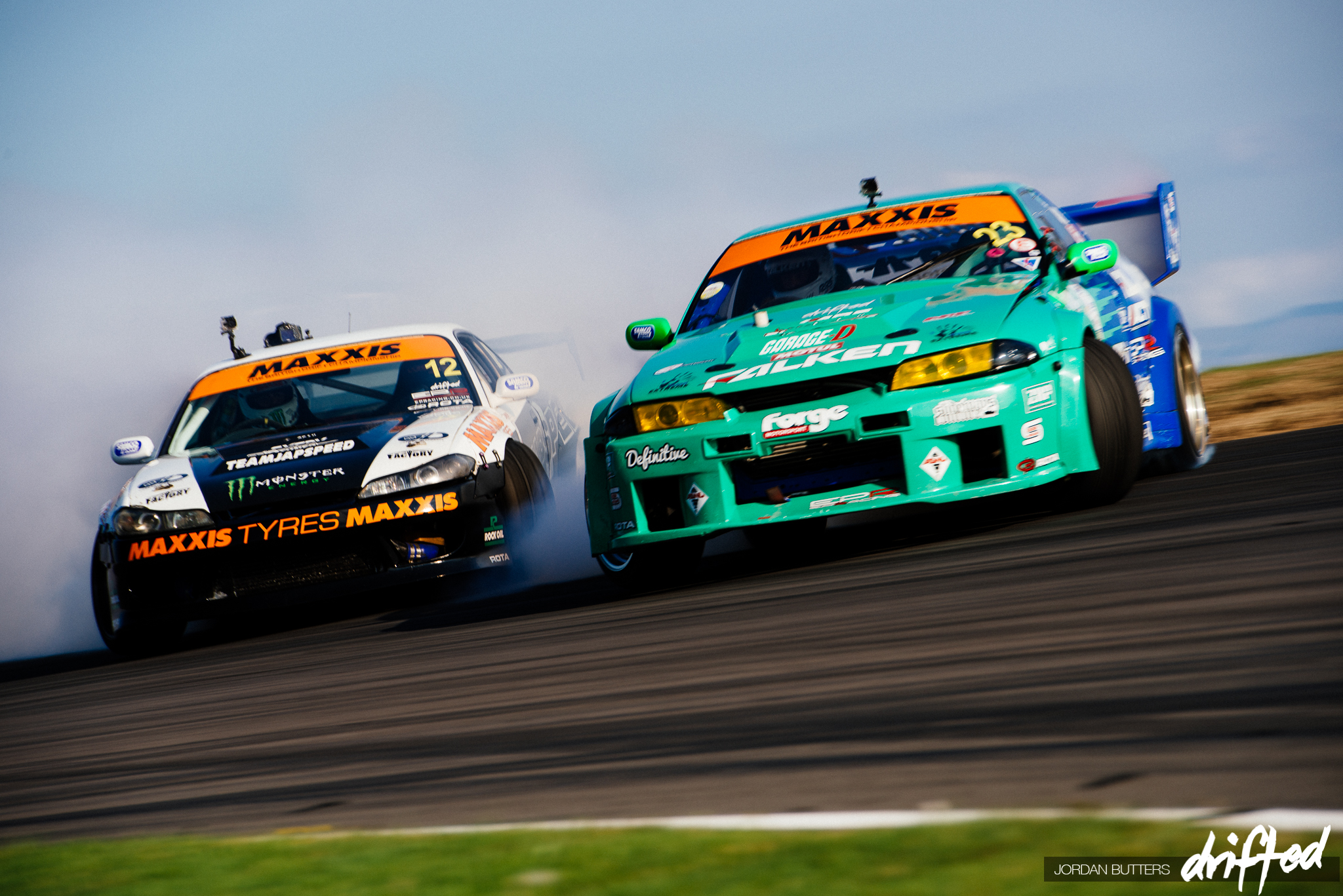 2014 has been the championship’s most successful year yet, with the six rounds having produced some of the most exciting drifting we’ve ever seen. We are excited to announce that in the name of progression, there will be a number of changes to the 2015 championship.

Classes
As many of you will know, BDC rounds are currently split into three classes: Semi Pro, Pro and Super Pro. While this class system has worked extremely well since its introduction, the high level of car preparation and driving standard improvements have caused the lines to become blurred between the three classes.
Seat time has also been another concern raised by many drivers. Trying to provide ample practice sessions for 120 drivers spread across three classes on one day is never going to be easy despite our best efforts.
For 2015, three classes will become two. The Super Pro class will be renamed Pro. This will see the current crop of Super Pro license holders joined by the top sixteen drivers from the 2014 Pro class.
Those finishing in seventeenth position or below in the Pro class in 2014 will be joined by the current crop of Semi Pro drivers in what will become known as the Pro Am class.
While the events will still be run across a weekend, Saturdays will now be devoted to the new Pro Am class. Saturday will also include a practice session for the Pro class while necessary off-track Pro Am business takes place (drivers briefings, etc.).  Sundays will see the Pro drivers.
By compressing the entry list into two classes we will be able to provide additional practice time for all drivers, along with Top 32 battles at all rounds (where possible). Practice will also be run in an open pit lane format, allowing drivers to get in as many laps as possible while still being able to return to the pits for fresh tyres or to make adjustments to vehicle set ups. To make things more interesting, the Top 4 finishers in each round of the Pro Am class will be granted the opportunity to compete in the following day’s Pro competition, giving that extra incentive for the Pro Am drivers. Should a Pro Am driver finish in the top 4 in the Pro class they will automatically gain promotion for the rest of the season.

If a Pro Am driver gains a podium finish in the final round the driver will gain promotion to the Pro class for the following season but retain their position in the current Pro Am standings for championship purposes.

Licensing
Driving standards have constantly been on the rise since the BDC’s early stages, with driver abilities, car setup and all round experience helping to improve the skills of those wishing to gain a license to compete. Over the years the BDC’s Licensing Days have seen some fantastic drivers secure a license and a subsequent passage into the championship. With the bar being raised at every single event it has become increasingly difficult to award licenses fairly to those who deserve them.
In addition, with both the Semi Pro and Pro classes being fully booked at every round of the 2014 season, it’s often impossible for new license holders to sign on and make their debut in the championship. As a result of this, we have now decided to suspend any further BDC Licensing Days.
Instead, drivers will be able to qualify for BDC entry through the Drift Cup series. Drift Cup was introduced in 2014 as a grassroots series, providing many drivers with their first taste of competitive drifting. The series has already seen some fantastic drivers rise to the fore having reveled in the competitive yet relaxed atmosphere and it is drivers like these that we want to see rise through the ranks to the BDC. Despite being made up of two classes in 2014, Drift Cup will contain only one class in 2015.

The Top 4 drivers in the Drift Cup series at the end of  2015 will see themselves awarded a BDC Pro Am license. In addition, the top 4 drivers at each individual Drift Cup round will be granted the opportunity to compete in the Pro Am class at the next BDC round (subject to their cars meeting BDC rules and regulations). If a Drift Cup driver finishes in the top four of the Pro Am class of the event he/she competes in, they will be granted a full BDC licence.

All of the above may seem like a drastic departure from the current tried and tested formula, but here at the BDC we are committed to ensuring that our events offer the best competition for drivers and progression of the sport. By bringing the aforementioned changes to the class structure and schedules into effect,  we are certain that 2015 will be the best season of the BDC to date.

Thanks for your continued support and we’ll see you trackside soon! The dates and venues for the 2015 British Drift Championship will be announced on Thursday 8th January.