Drifting has come a long way since it was first popularized in Japan in the 1970s and it has gone truly global, with North America, Europe, Asia and Oceania embracing the discipline.

Nowadays, the Middle East is no exception. A region that is synonymous with horse racing has also developed its own hugely popular drifting division, building on an increasingly expanding motorsport scene in general, with two Formula One races, its own Rally Championship, and numerous other racing classes prevalent throughout the Arab world.

Drifting’s rise in the region has been symbolized, at the elite-level at least, by the Red Bull Car Park Drift. This is a competition which started as a one-off event in a shopping center car park in Lebanon in 2008, but now features 13 regional qualifiers and a world final, spanning six months.

The winner of each regional qualifier – which covers most of the Middle East and North Africa – earns the status of King of the Drift. He would also take his place in the world finals, this year held in Istanbul, Turkey on September 1st. The fourth of these qualifiers - after events in Kuwait, Egypt and Oman - will take place on Friday in Dubai, UAE where thousands of spectators are set to turn out.

Penalties are then handed out if the driver hits any obstacles, spin their car, or drift the wrong way. If a driver accrues three penalties in one round, they are disqualified. 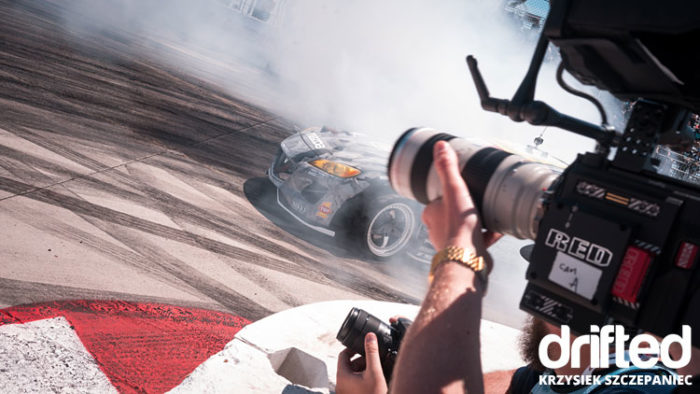 Meanwhile, the car park locations have allowed organizers to get creative. For instance, the upcoming event in Dubai is being hosted on a rooftop. The series has also given a platform for Middle Eastern drifters to showcase their talents and provide the region and its burgeoning drift scene a competitive platform.

Some of the drifters to have found success in the Red Bull Car Park Drift include Omani Haitham Al Hadidi who won the 2016 world finals at just 18-years-old – two months after passing his driving test! However, Al Hadidi is not competing in this year’s series, as he is studying abroad.

The series has also contributed to the achievements of regional drift and rally legend Abdo ‘Dado’ Feghali, who in 2013 broke the Guinness World Record for the longest drift in Abu Dhabi, registering a continuous drift of 11.18km (6.94 miles) around Yas Marina Circuit. While no longer competing, Feghali works as a technical adviser for the Red Bull Car Park Drift series.

After Friday’s qualifier in the UAE, the series will make its way to Lebanon and then Algeria next month, before moving on to Mauritius, Tunisia, and Morocco in June. Qualifiers then take place in Georgia and Turkey in July. The last two regional qualifiers are held in Jordan and Saudi Arabia before each King of the Drift descends on Istanbul.

The Red Bull Car Park Drift may be a slight departure from the norm, compared to other established drift championships around the world. However, it has done a superb job in promoting drift to a new part of the world and allow a region with a huge interest in motorsport to branch out into it, while providing a platform to the Middle East’s drift talent.

As the series continues to grow from strength-to-strength, expect drift to become an increasingly central part to the region’s motorsport scene and the Red Bull Car Park Drift to be at the forefront.