If you haven’t seen Part I and Part II yet, head over and catch up on them first. We were over at the world famous Nurburgring, AKA the ‘Green Hell’ in Germany for a series of demos and passenger runs at the Falken-sponsored 24hr race. A perk of being over for the event meant that we got to enjoy the spectacle that is the ‘N24’ from start to finish bar a few hours, as our demo’s fitted in nicely around it.

Falken were debuting their new Porsche 911 GT3 R at the event.

The car is a feat of engineering and is powered by a 4.0-liter six-cylinder, naturally-aspirated boxer engine that produces 480 horsepower at 7,250 rpm! I should think you’re wondering why no pictures of the full car here. As much as I like tight crops, this is the reason…….

….the grid was slightly busy to say the least! Pre-race the grid is opened up and the public can wander to their content get get close to the cars ad drivers. I really liked this personal touch and was surprised that such a large and prestigious event did this. And I’m sure the fans appreciated it! 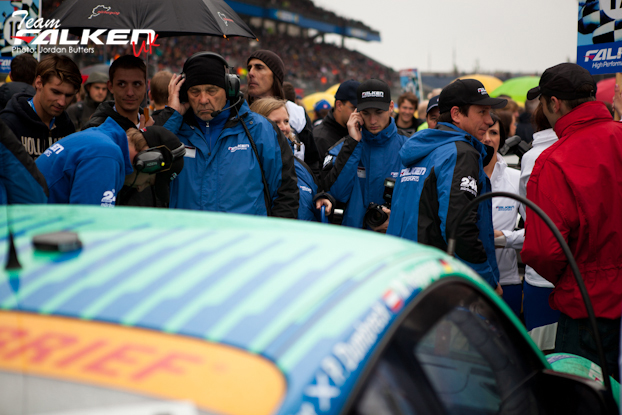 Despite the open grid nature there is still a hive of activity, lots of serious faces on people wearing Falken jackets, lots of phone calls and headset-chatter too! The track was damp but the skies showed signs of clearing so decisions were being made on which tyres to start on.

I noticed this map attached to the inside of the driver’s door. Its always good to know which way to go, especially on a circuit 25k long, at night. I guess sat-nav isn’t allowed?

Being a petrol-head through and through I found it fascinating to walk the pits and grid as the drivers and teams got ready for the race. Team Falken UK drivers Paul, Matt and Alan were right behind me right? Err……no. Whilst I got rained on they enjoyed the plush all inclusive VIP hospitality that Falken put on for guests in the Mercedes stand. Complete with view of Turn 1 and multiple screens showing the race from all angles. 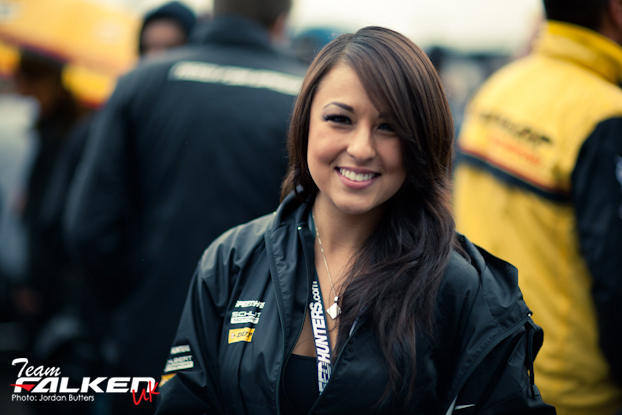 Down on the grid I spotted a few familiar faces, DJ Miki Taka from Speedhunters/Formula Drift fame was accompanying the Need For Speed Z4 along with Speedhunters’ chief Rod Chong. 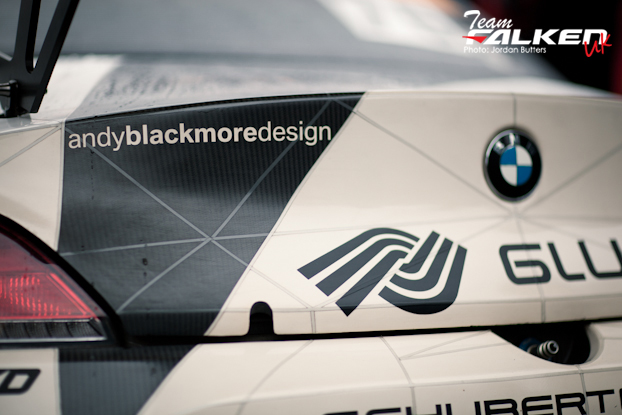 The Need For Speed Z4 was looking good on the grid. Sadly later on in the race it was involved in a fairly hefty collision, pretty much totaling the chassis.

Check out the footage above! 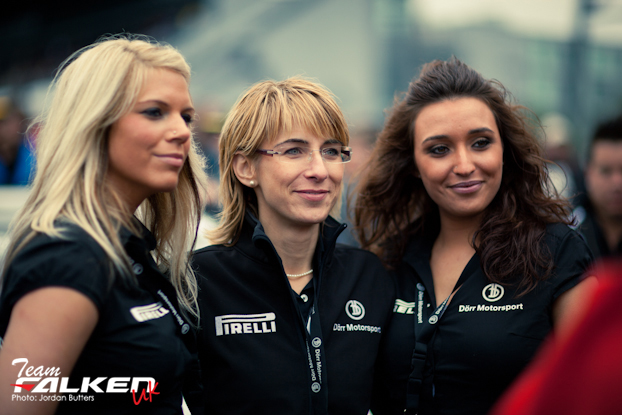 The promo girls from Dörr Motorsport put on a smile for the cameras.

Lina Van de Mars (centre) was at the N24 on behalf of Falken and is a big drift fan. She is a huge TV personality in Germany, a really cool person and joined us in hospitality over the weekend.

As the grid was cleared off of the public I used my Press pass to full advantage to get some shots in of the cars as they were ready to launch. 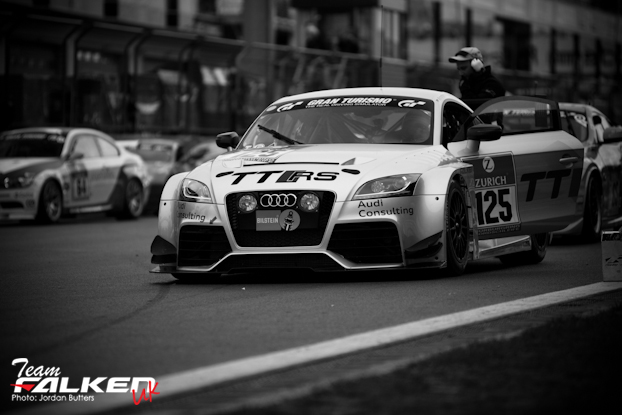 The buzz in the air is unreal and the anticipation on everyone’s faces in notable. This is the last time these cars, drivers and teams will rest for the next 24 hours. 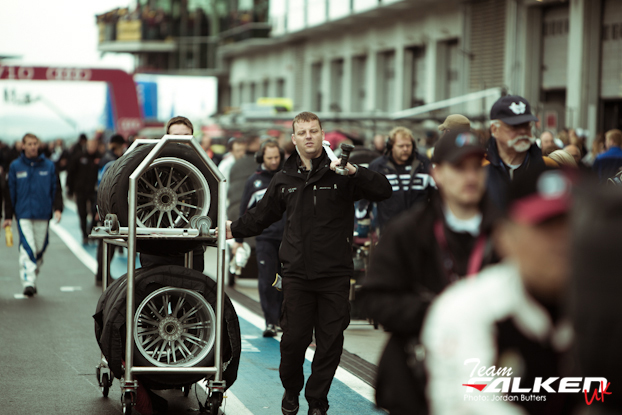 Suddenly the pit lane feels as busy as the grid was. Everyone floods back in ready for the rolling start. 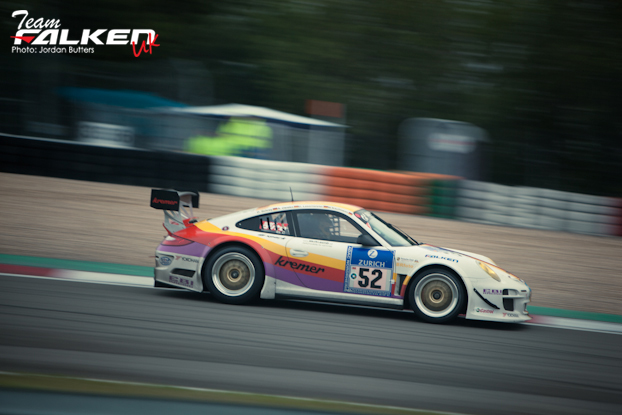 The sound of engines starts to resonate down the finish straight and we’re racing. The next N24 hours will be the most intense these drivers will experience all season. The Green Hell doesn’t take prisoners.

We head back to the drift paddock and grab some seat time as the passenger rides start.

The small area set out for the passenger rides were slow-speed but provided plenty of action for the crowd to see. 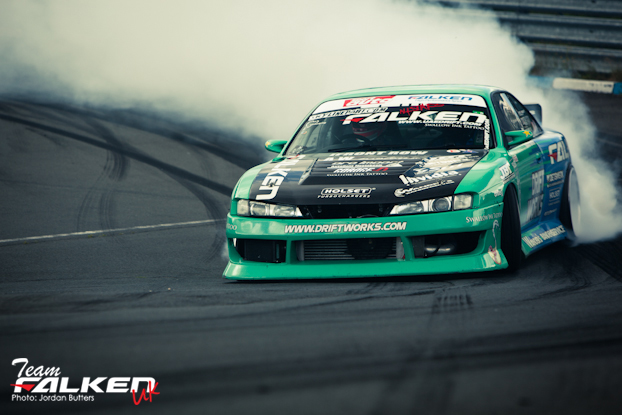 Lennard Wander smokes it up the rise before the track exit.

The Falken guests arrived by the bus-load. I don’t think some of them quite knew what to expect from their ride!

So we did our best to entertain them and give them an experience they wouldn’t forget! 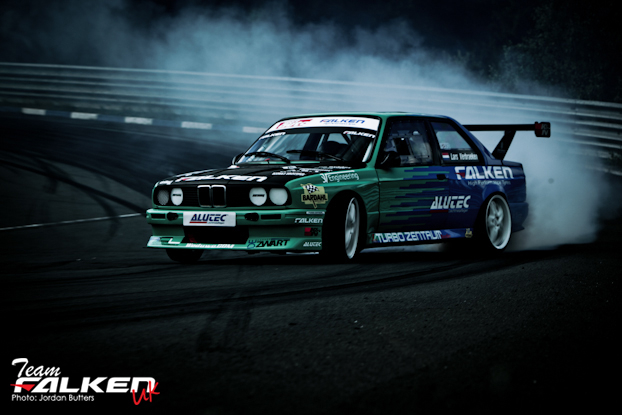 Big Remmo and Lars came out to play in the V8 and 1JZ E30s respectively. In the meanwhile, out on the Nordschleife….

……the Falken 911 GT3 R was lapping fast! Unfortunately it was hampered during the race by an engine failure and then a gearbox fault. Meaning two separate major pit-stops to replace engine and box. This left them in 176th position upon re-entering the race at 10pm on the Saturday night! 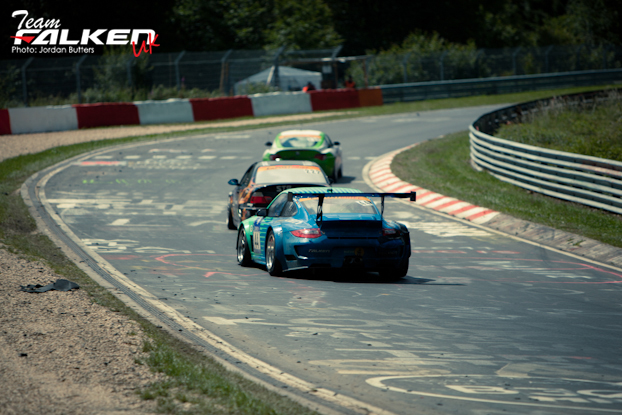 But after a stellar effort from drivers and team they climbed an incredible 128 places and finished in 48th position!

The night racing was amazing to watch. Something every automotive fan should experience. 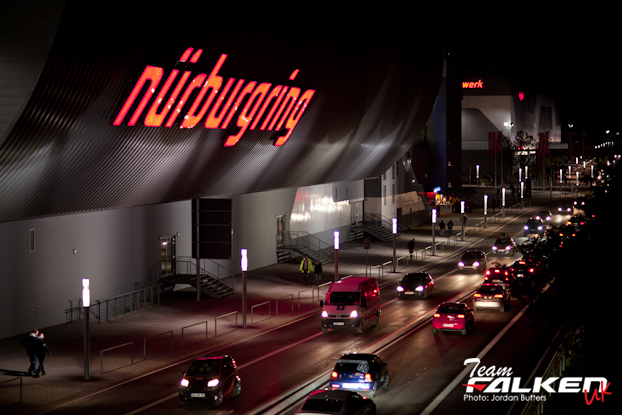 The ‘Ring is a hive of activity into the night, no-one seems to sleep!

The hardcore fans are pretty crazy! Yes that is a man launching fireworks from his mouth! 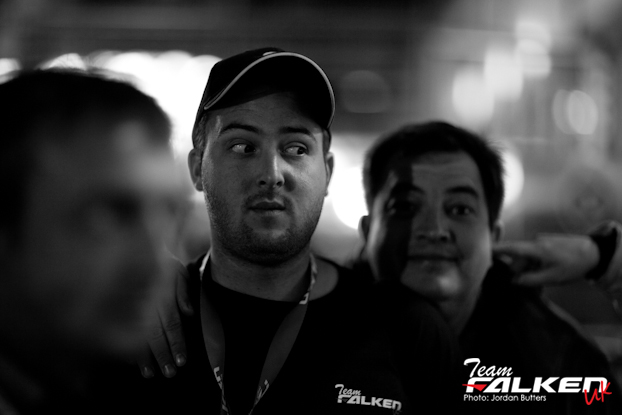 We were all just pretty awe-inspired left right and centre.

Whilst the team retired to hospitality (again) I hit the pits. I didn’t really know any familiar faces so just wandered about trying not to get run over. 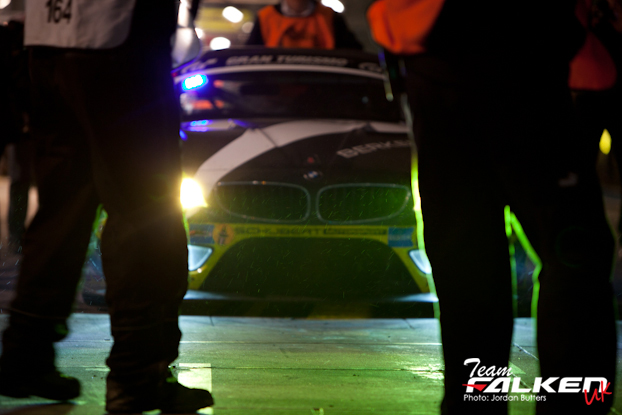 Which was harder than it sounded. The speed and ferocity at which the cars left the pits was pretty intense, in the way or not, they were leaving! 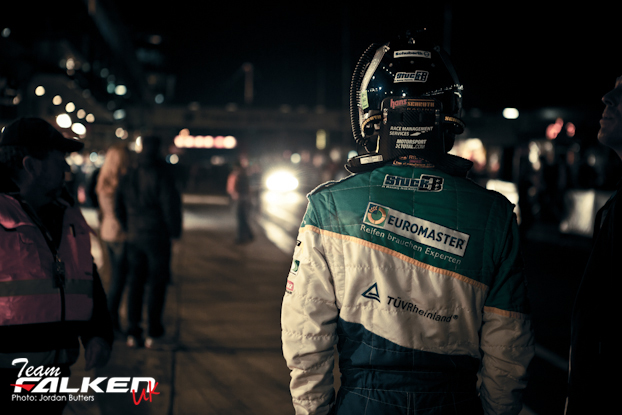 Driver changes were a bit more sedate, the new driver taking time to strap himself in and get ‘comfy’ whilst the crew change tyres, check levels and top-up and perform routine maintenance.

Everyone has their job, each is practiced and choreographed to intersect seamlessly.

When racing for a day and a night reliability is king. 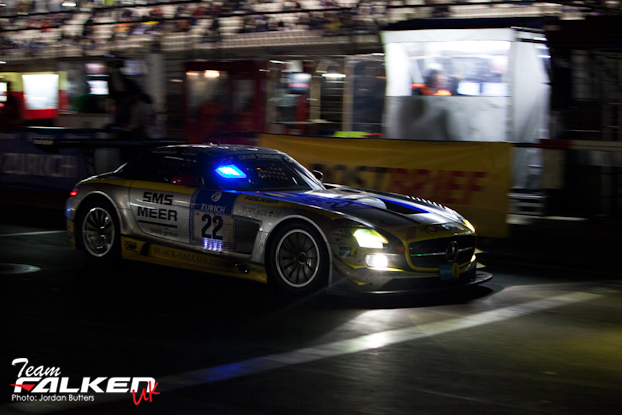 And is the difference between winning and losing. 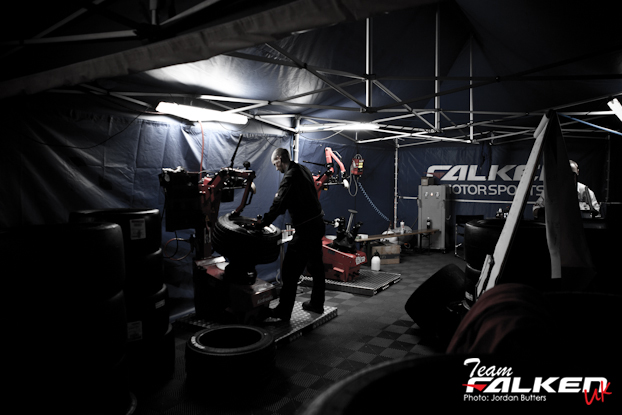 Teams are kept busy into the night. Every individual a vital cog in keeping the wheels turning.

Back in the hospitality the N24 party was in full flow!

Out on circuit the bright headlamps pierce the darkness. Above, a custom built Ferrari P4/5 Competizione is revealed by a chasing competitor. 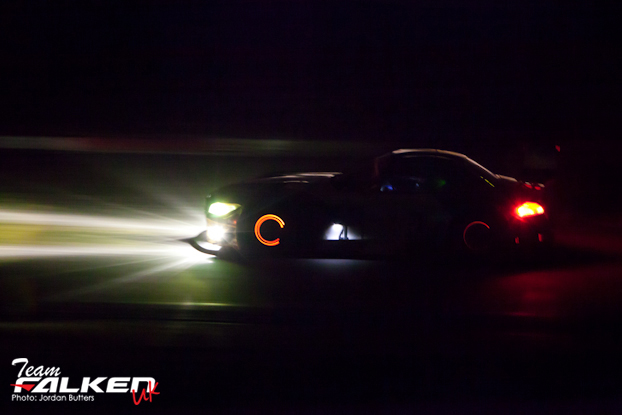 Your senses are heightened and energy is illustrated by illumination. 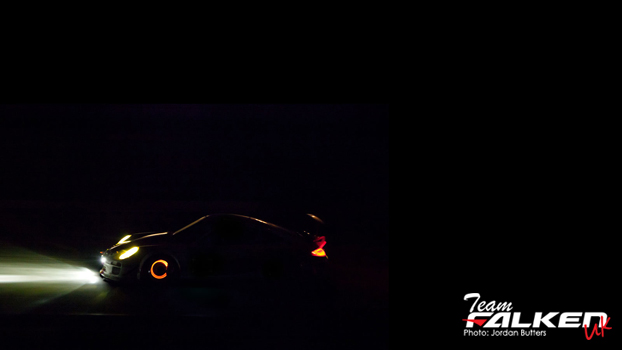 Brakes glow red hot, exhausts (and turbos on the 911) light up the track beneath. 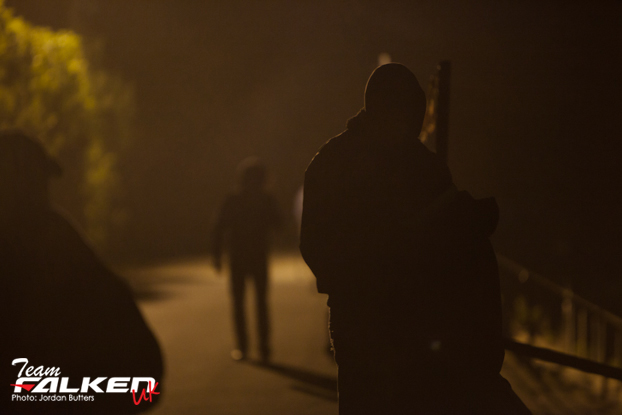 The ‘tribunes’ are a kinda spooky place to be at 4am. People litter them scattered about, some asleep, some awake. There’s something ‘Night of the Living Dead Race Fan’ to it.

At 5am we find a fire and settle in for a nightcap. It’s been a long day just being here, I can’t fathom what the drivers are experiencing right now.

We decide to try and get some sleep, just as the sky begins to light at sunrise. The N24 has us beat.