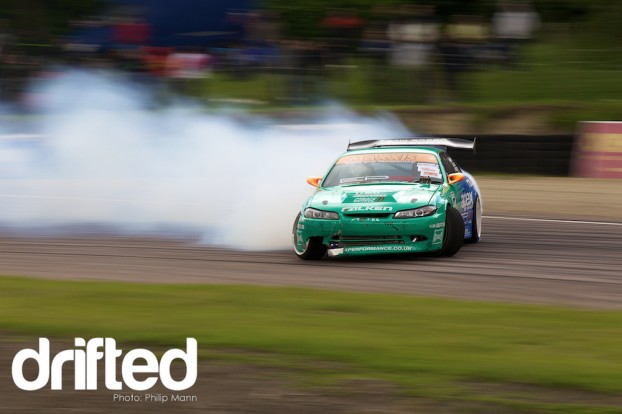 It was time for the pros to come out to fight it out for the win.

It would be an action packed afternoon that doesn’t go to plan for everybody. 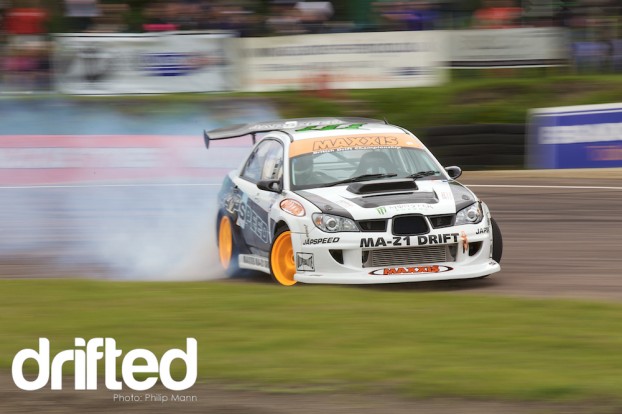 Baggsy would also have car troubles and would play no further part.

Just like earlier with the semi-pros, the rain makes an appearance again.

Vince Noott pulls off a good run as the track starts to get slippery again. He keeps his head and manages to qualify in 7th.

Julie Robinson has 2 trouble free runs to get her into 13th place. Ashley Stevens struggles with the changing track conditions. He pulls off a fantastic entry into the first corner but struggles with the rest of his run. But he manages to pull himself together to grab 12th place. 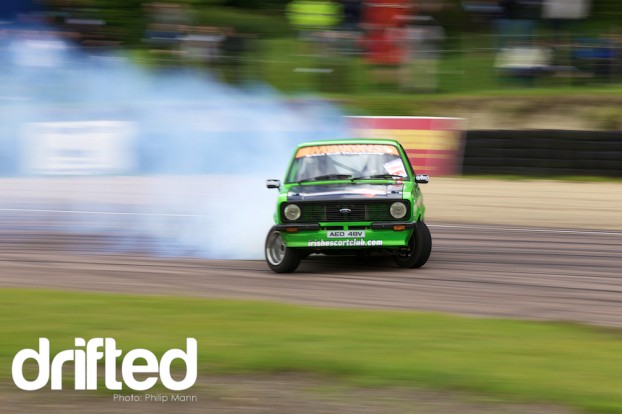 As per the morning sessions Declan Munnelly is still driving all out. He manages to get an 88 point score on his first run, then in his second run he manages to score a 91 point run. His initiations into the first corner were mad, he was shaking the car side to side then giving it a big flick into the first corner. Nobody would be able to better his runs, so this puts him in the top spot.

Another driver that was having bad luck in qualifying was Paul Cheshire. On his run up to the first corner something broke on his front suspension. From this moment onwards he was just a passenger in the car, the wet grass did not help the situation as he was unable to slow down before hitting the tyre wall.

Fortunately he was ok, but his some of the bodywork on the car is now looking rather secondhand.

Phil Morrison attempts a backwards entry on the first corner. He get amazing angle but a slipping clutch means he can’t quite hold it together. Sadly because of the issues with the car Phil fails to qualify.

Greg Gush in his bright yellow PS13 puts in some storming runs to get himself into third place.

The two team Teyaki boys both have problems in their runs, both failing to get into the top 16. Martin gets 20th and Lloyd gets 19th.

Mark Luney and Stiggy go out for a practice run. It does look good with the smallest car going out after the biggest and smokiest, it shows size doesn’t matter in this competition.

Both manage to qualify, Stiggy getting 9th and Luney getting 5th.

In the last group of 4 drivers there were two that I was surprised to see. Bonbon had managed to get his car fixed after the diff fire that he had in the morning. At first i thought my eyes were deceiving me, I spotted Shane’s car out on track again. But this time it was his Japspeed teammate Daniel Eyles behind the wheel.

Alan Green tries to go all out and pulls a backwards entry into the first corner, but he can’t hold his run together and spins on the second corner. 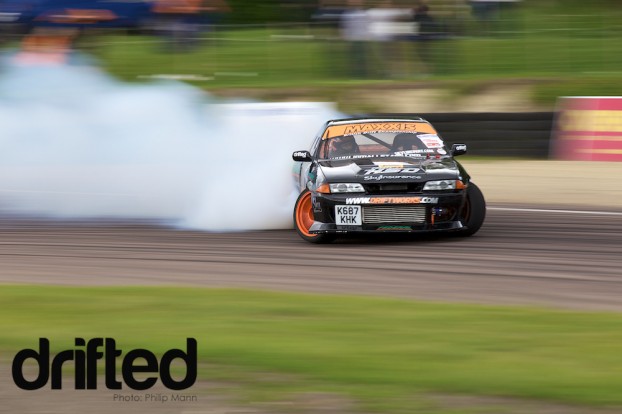 Both Bonbon and Daniel struggle in their runs. Daniel can’t get to grips with Shane’s V8 and misses out with 21st place. Bonbon has a better second run to land 10th place. 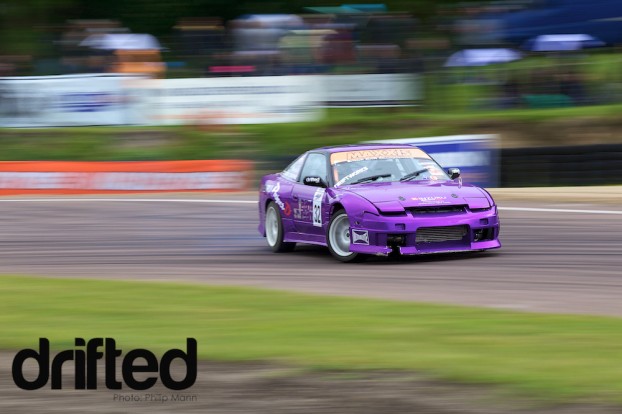 The rain returns and this time it’s time for the pros to start sliding off. Ashley goes off on the first corner in his battle with Mark, giving Mark an easy 10-0 advantage. Ashley has a better start to his second run, pulling a gap from Mark. Mark pushes hard but Ashley makes another mistake to give Mark a 6-4. 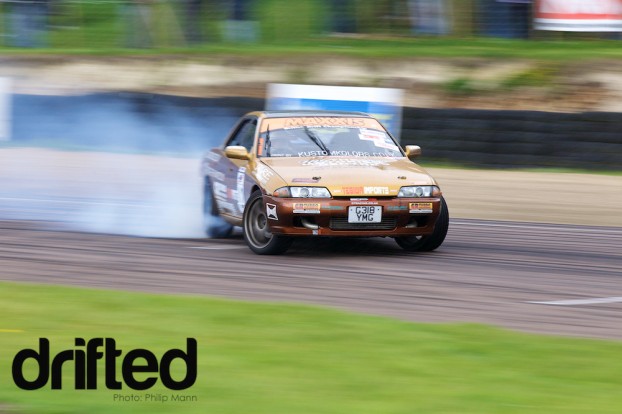 Next up is Julie Vs Paul. In the first run Julie gets a 10-0 because of Paul spinning at the first corner. In the second run Julie doesn’t do so well. She makes a few mistakes, allowing Paul to overtake. This gets scored 9-1 to Paul, but Julie just goes on to the top 8 with her first run advantage. 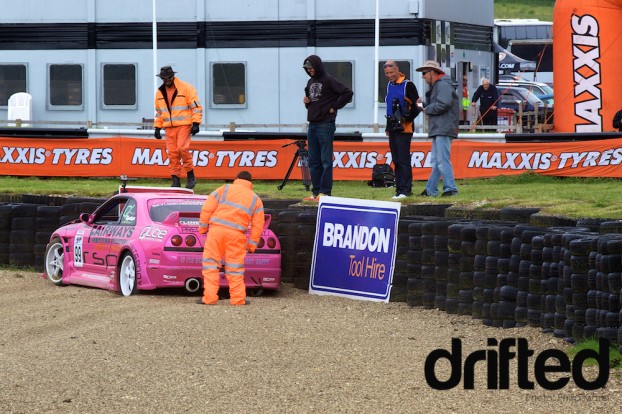 Simon and Danny go next. Simon sticks close to Danny and pulls a 6-4 advantage going into the next run. Simon manages to pull off a perfect parallel park in the gravel at the first corner. The car looks ok with just a bit of bodywork damage. Sweeps and Motty the commentators have a bit of a laugh as Simon waits to get towed out. Danny gets a free pass into the top 8.

Shane and Steve go out for their runs. Shane gets a slight 6-4 advantage in the first run, then both drivers are scored a 5 in the second run. Shane goes through on his first run advantage.

In the first run between Wayne and Greg, Wayne fails to drift part of the track, handing Greg a 7-3 advantage going into the second run. Both drivers have equally bad runs second time round and are both scored 5. Greg goes onto the top 8.

Stiggy and Vince go out for their first run. Both cars are looking good but Stiggy manages to pull a slight gap during the run and he wins it 6-4. In the second run Stiggy straightens and gives a 6-4 advantage to vince. They will have to run one more time. Stiggy has 2 bad runs, giving Vince a 7-3 in the first run and spinning in the second, putting Vince into the top 8.

The last of the top 16 battles is between 1st place qualifier Declan and Sid Crowfoot. Some clean runs from Declan see him getting a 6-4 advantage in both runs, putting him in the top 8.

The rain clears up as we go to the top 8 Battles.

In the first of the top 8 battles Julie is up against the might of Mark’s Supra. She pushes hard in the first run but clips the inside curb on the last corner and Mark takes a 7-3 lead going into the second run. Mark has another strong performance in the second run to get another 7-3. 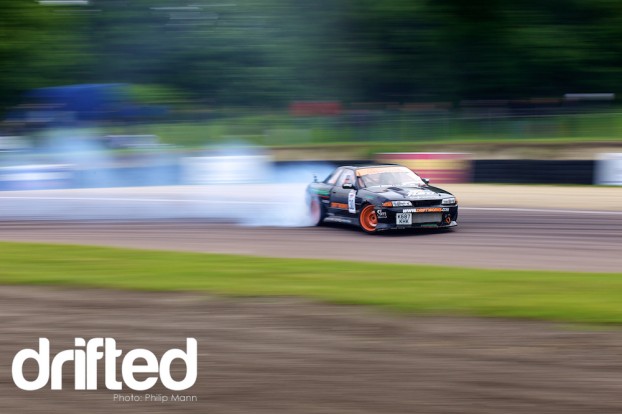 Bon bon has a good first run against Danny to get a 7-3 advantage. But Bon spins in the second run to put Danny into the semi finals.

In the battle between Shane and Greg both drivers are an even match for each-other. In the second run Shane has a slightly better run than Greg and goes onto the semi’s with a 6-4. 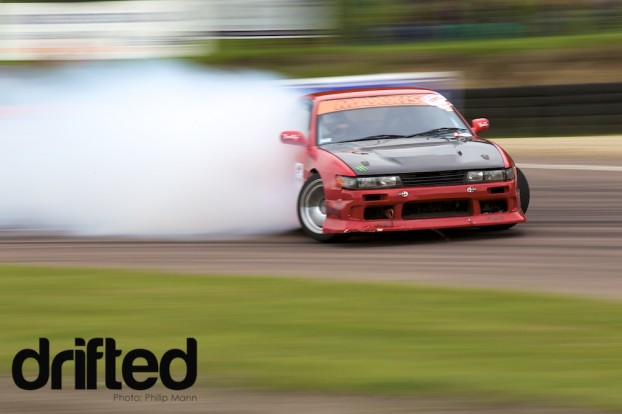 Mark Luney and Danny O’Brien are up first. The first run is close but Mark gets a 6-4 advantage going into the second run. Danny has a poor second run, missing a shift for the last corner, and hands Mark his place in the final with a 8-2 win. 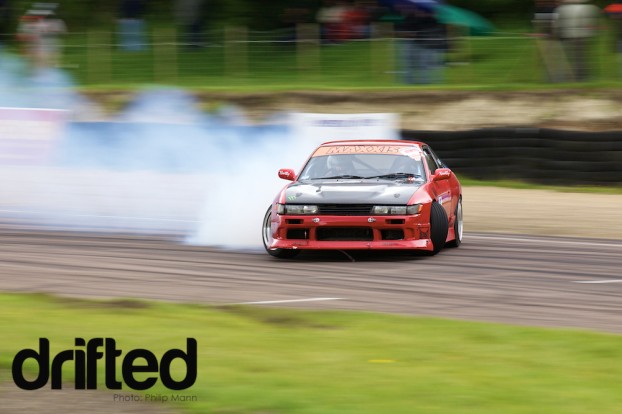 Danny Vs Vince for 3rd place. Danny leads on the first run, going well until the last corner. Danny misses his shift again for the last corner and doesn’t drift it. On the second run Danny makes a few more mistakes. Vince has a strong run and goes on to take 3rd place. 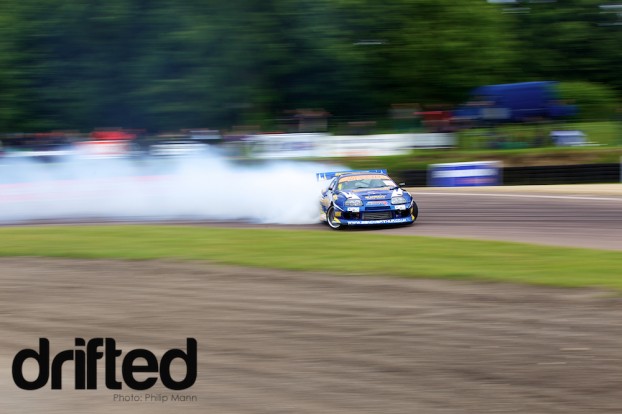 Going into the final both drivers take a nice easy practice run. Mark calls 5 minutes so he change his wheels for the final. But Mark discovers a problem. It’s a tense few minutes as people wait to see what the problem is. It turns out that he has sheered a bolt on his wheel spacer and would not be able to fix it with the time he has left.

Shane Goes out for a victory lap.

Not the way a Driver wants to take a win, but after a day of fantastic drifting, Shane Lynch of Team Japspeed takes the top spot on the podium. 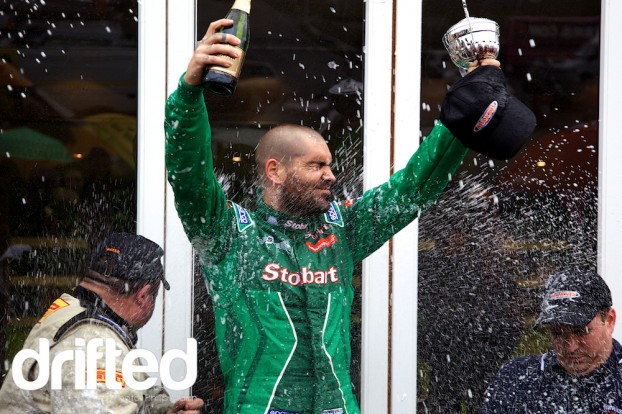 Well done done to all the drivers, and to those that have broken cars, i hope you can get them fixed for the next round at Donnington.

Thats it for my round 3 coverage, i hope you all enjoy. You can check me out on flickr – http://www.flickr.com/photos/philip_mann/, for more photos from the day.