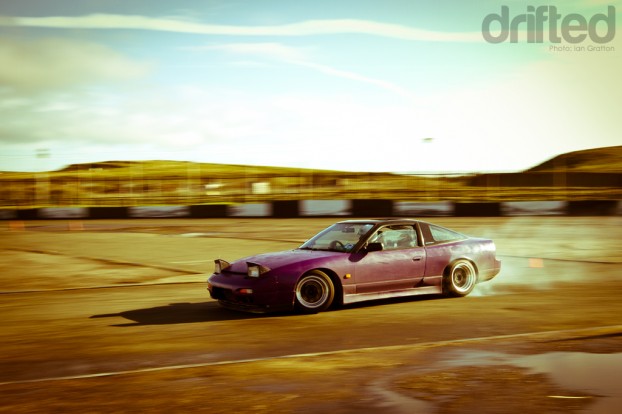 It was time for my monthly journey back over to Buxton Raceway for another Drift ONE £10 drift day and as the last one of the year it couldn’t be missed.  Quite literally a smashing time was had by all.  On my last visit to Buxton it rained…really really rained.  I was prepared for yet another freezing cold day subjecting my body to the harsh wind, cold and rain but this time I was wrapped in several layers of thermal clothing to give me a fighting chance (Not to mention an extremely stupid looking ‘Fargo’ hat).  Whilst cold, the skies were clear of cloud and showing no signs of rain it was still very windy – a far cry from the shorts and t-shirt weather of only 2 weeks earlier at the KD Drift Championship in Portugal.

The usual Buxton regulars were all in attendance along with several new faces which goes to show how popular the event has become throughout the year.  I headed over to the cafe to get myself a nice warming cup of tea in preparation for a few hours inside the ring of steel.  Its here I bumped into two more photographers Lee Broadley and Mark Philip White both also wrapped to the max.  A few of the drivers that make long journeys to Buxton had still opted to sleep at the track in tents last night – nuts!.  I dont think anyone could cope with Buxton if the cafe wasn’t there to provide hot food and drink through the day. 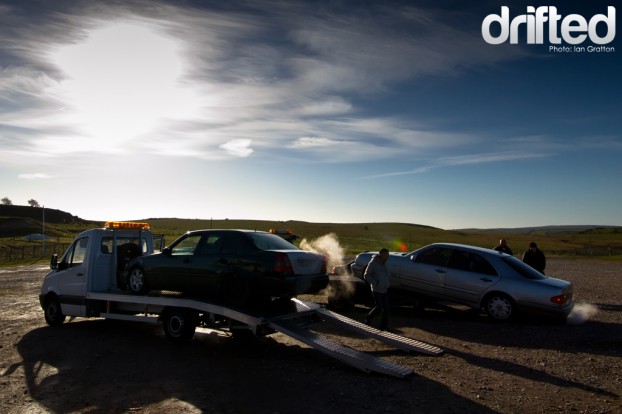 The green Mercedes C28 was back along with with another transporter carrying a rather potent sounding AMG S-class.  The green C28 looked in pretty good shape considering its sizeable rub against Buxton’s steel wall at the last event.  Having spoken with the owner it was obvious why – he runs a Mercedes breakers.  This will serve quite useful later on as you will see. 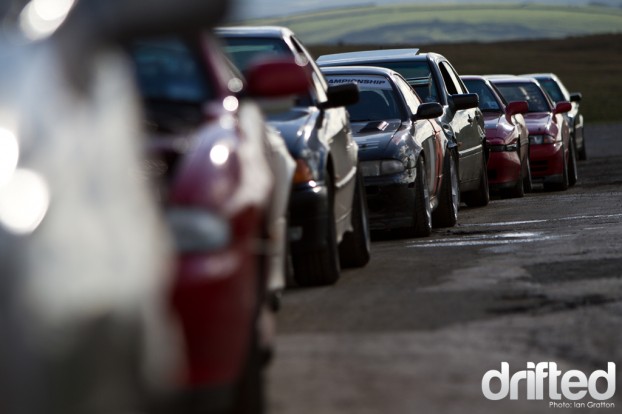 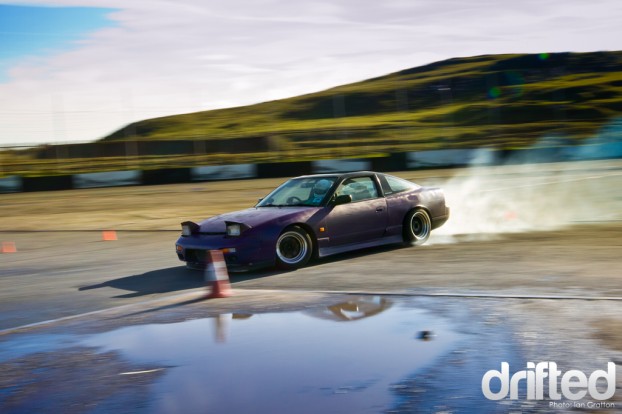 Ed Coley was back again in his low slung CA18 powered s13.  Being very consistent Ed allowed me to try out my newly acquired 10-20mm ultra wide angle lens.  I was stood in the puddle in the foreground of the photo to get this.  Ed looks a long way away but he’s really not – using this lens its important to keep looking away from the cameras view finder to check just how close you are and aren’t in danger of becoming a human clipping point. 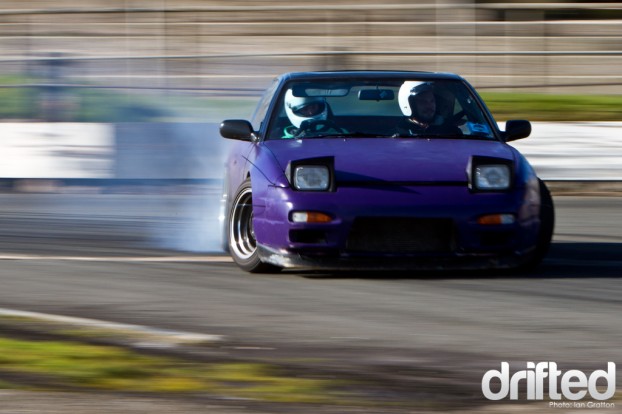 Ed kept up with the consistent driving throughout the day – always putting a smile on passengers faces. 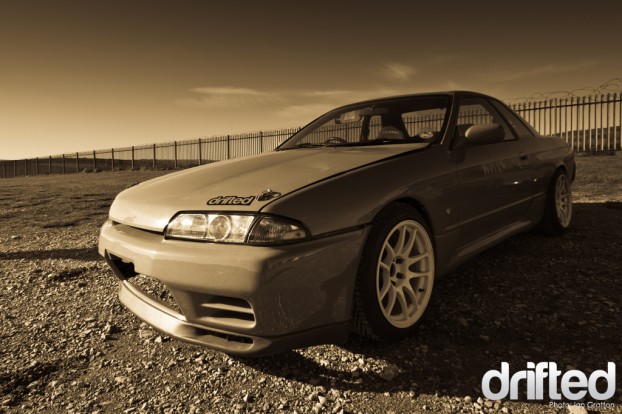 Adam Simmons Red R32 Skyline is now back onto its standard bumpers and skirts.  Flimsy posh aero explodes upon contact with the ring of steel and there are only so many times it can be ‘sensibly’ repaired.   This is the way R32 skylines look best.  All this car needs is a front mount intercooler to fill the void in the front bumper, GTR bonnet and front grill and a subtle little Nismo drag spoiler and its perfect. 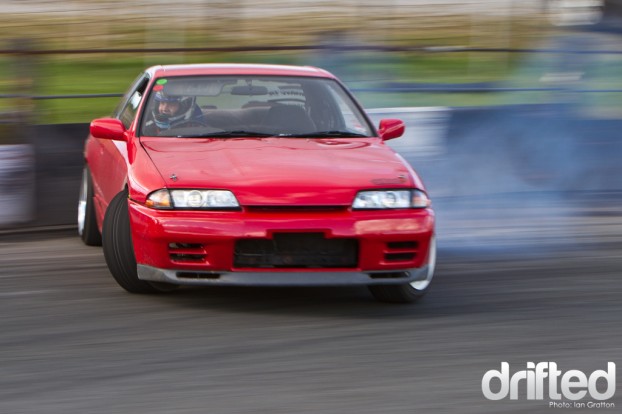 Adam certainly isn’t shy of the steel ring now as you can see. 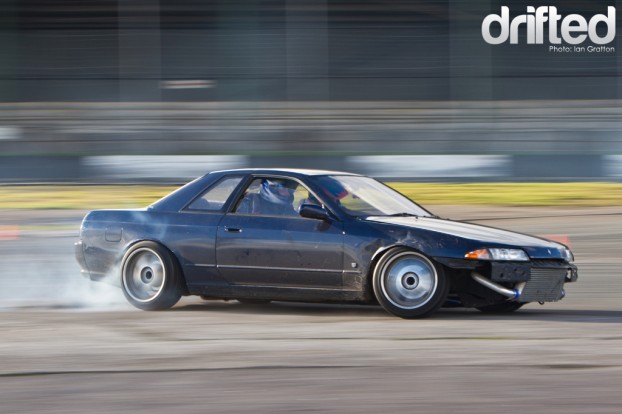 Buxton regular Ross Burgess was also back in yet another R32 Skyline – pushing harder and harder throughout the day. 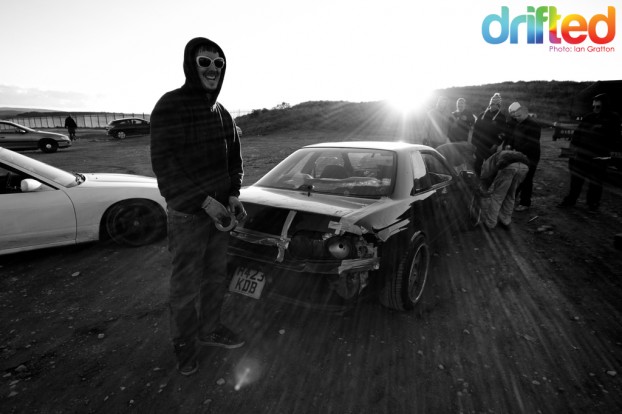 Unfortunately towards the end of the day Ross had a bit of a ding with the ring of steel.  Fortunately all surface-level scars so the car will be back to fight it out another day. 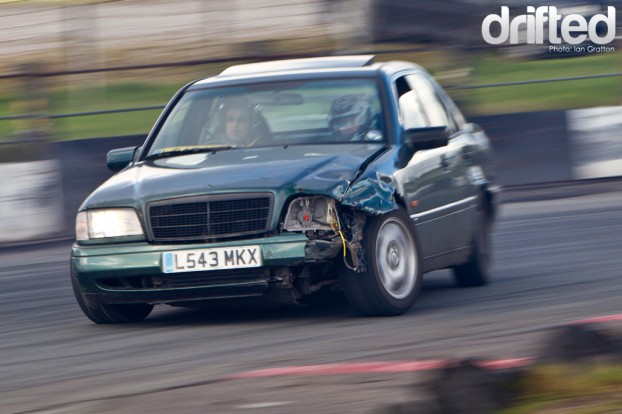 The C28 Merc was back in the wars again and took one for the team. 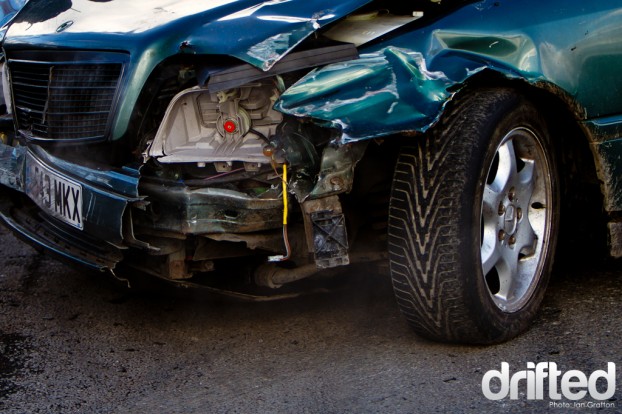 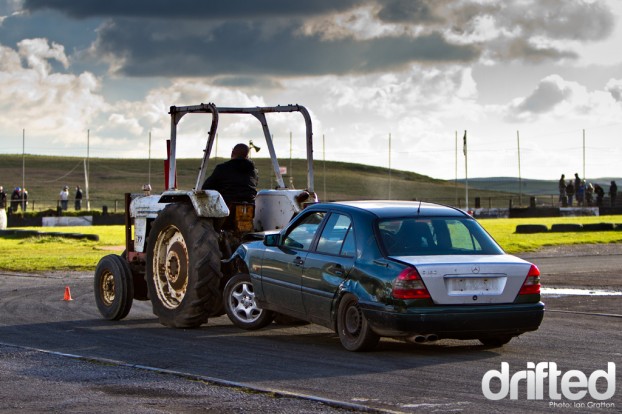 The poor Mercedes was unable to leave the ring of steel under its own steam. The advanced recovery vehicle was called into action. 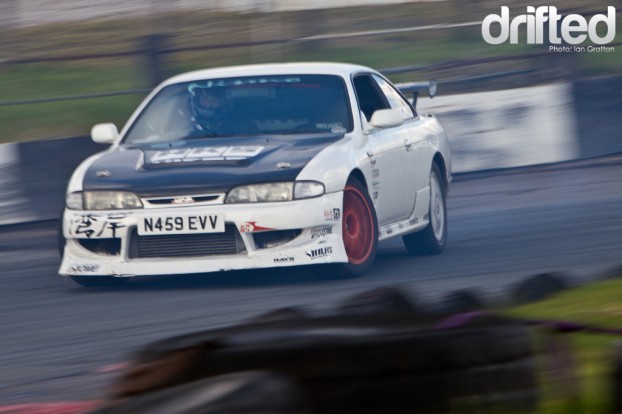 This newcomer was having a fun time at in this fairly potent sounding s14. 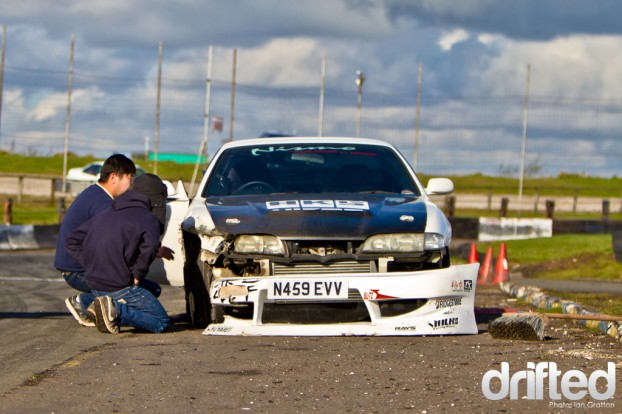 Unfortunately he became another victim of the day. Making quite a nasty mess of the steering rack,wing and lower arm.  Fortunately the chassis rails and suspension turret all look in the right place so it should be repairable.  Its never nice hearing that now familiar crunching sound at Buxton. 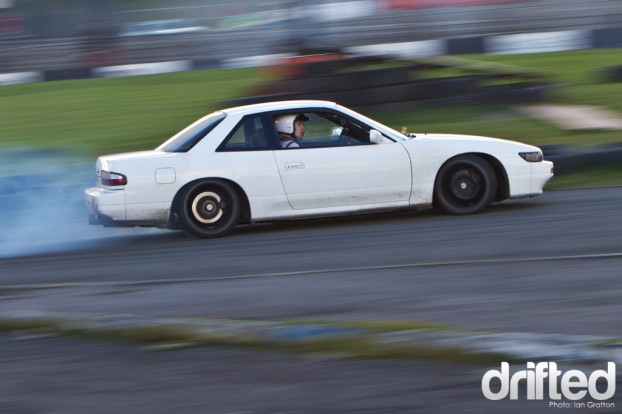 This white PS13 Silvia was in really really great condition and its owner was having some serious fun.  I’m pretty glad it didn’t come to any harm. 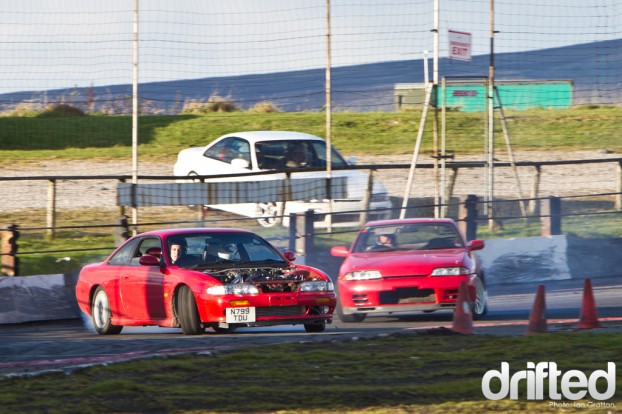 There was more multi-car mayhem.  Usually involving red Nissans, often 3 at a time. 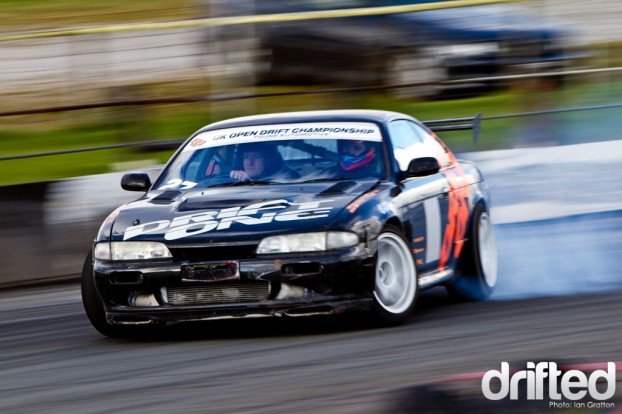 Towards the end of the afternoon I’d put the camera down and went off out for a quick ride in the Drift One taxi.  This is a really nicely set up car and soaks up the bumps of Buxton really well whilst having no body roll at all.  I really miss the driving side of drifting but this is as close as I get at the moment.

So that’s the last event of the year up at Buxton.  Its been another great year and I’m sure we’ll be back into the peaks again in spring 2011.