I’m sure I say it every year but, what an amazing year! Believe it or not we’re heading into our third year of Drifted here, an idea that was rather hastily conceived back in November 2009 to fill a void we saw in good quality, self generated drift coverage and content. The key phrases for us were, and still are, self-generated and quality. There are 1000s of other blogs out there that exist solely on the strength of trawling the internet and reposting the goods that they find. In our eyes thats just fine, and is an important part of the virality of the internet. But we had an itch to create content, to get out there to events, meet the drivers, meet the fans and to be a part of drifting directly. Our mission from there is simple – to bring you, our readers, as close a representation of what we felt and saw that day to you via the vessel of the internet.

As I looked back through my shots from this year I realised that I seemed to have developed a ‘style’ of shooting, somewhat subconsciously. When I say style I don’t mean a certain setting I use, position I choose on track or editing method or preset, I mean it in the sense of what I set out to capture at the start of every day. My aim contains three key elements, three things that sum up drifting to me if you will; excitement, atmosphere and emotion. To capture all three of these things you have to look past the cars, you need to try and capture the speed, the smells, the sounds and the tension, you need to capture the environment around you- the smoke, the light, the ambience, and, most importantly for me anyway, you need to capture the people – in the driving seat, in the stands and behind the scenes in the paddock.

My favourite shots of 2011 may not all contain drifting as you know it, but for me they sum up the feelings and emotions experienced this year in drifting.

The first event of 2011 was the British Drift Championship licensing event at Silverstone. There were a lot of people there not knowing what to expect. from the tension on the start line before a judged run.

To the elation of a successful navigation of the track. A drivers season either began or sadly finished at this event. 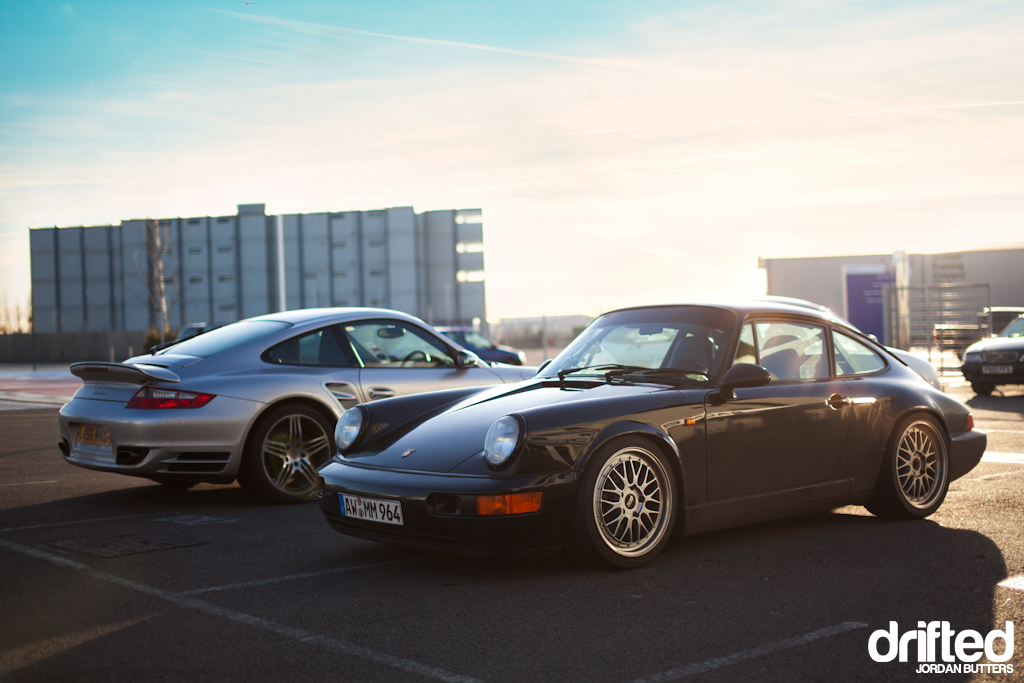 Alongside the licensing day the main track was being used for an open pit track day. And so my love affair with the 911 was sparked. Barely a day goes by where I don’t check the classifieds, waiting for the ‘right’ 964 to come along. 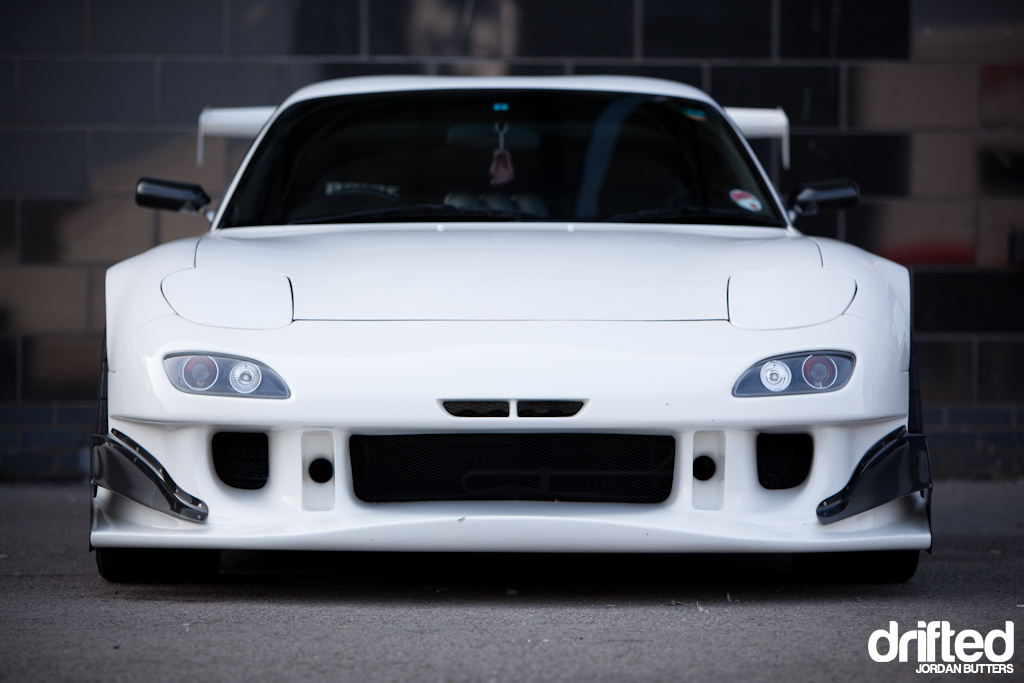 I spotted this clean FD3S at one of the Stanceworks UK meets at Milton Keynes. I’m determined to track it down for a full shoot at some point next year!

Before we knew it April was upon us and the successful licensees were up bright and early for Round 1 of the British Drift Championship. 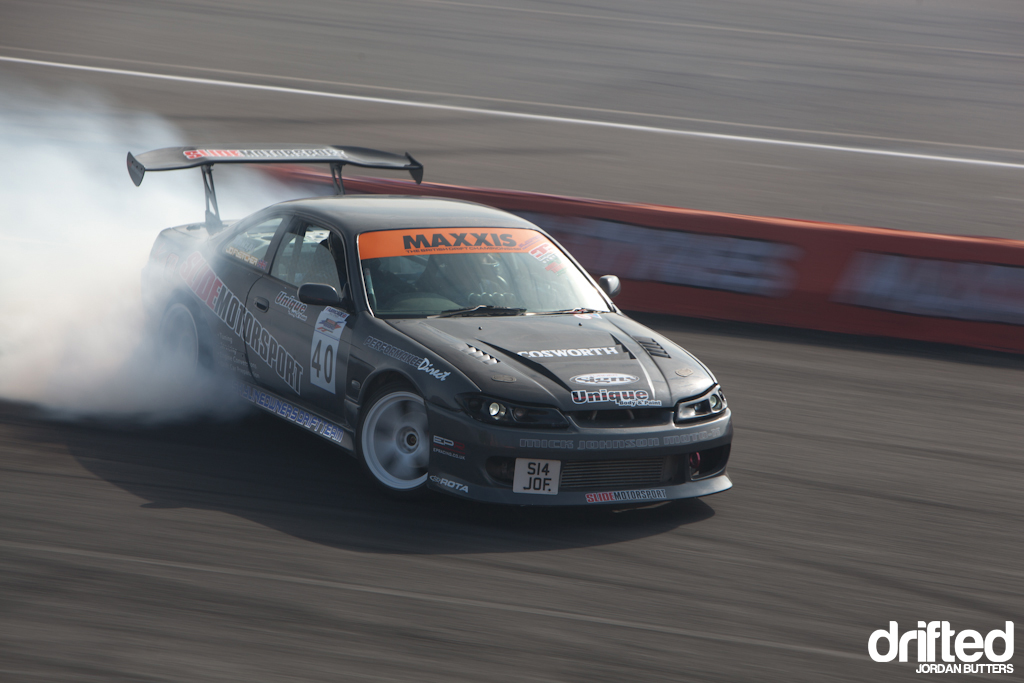 The first event of the year is not only a daunting one for drivers and teams, but also for photographers. The lull of winter leaving you pretty rusty and having to find your feet again quickly. I wasn’t having much luck shooting from ground level so a quick ascent to the top of the Maxxis truck yielded some nice shots against the dark asphalt backdrop. 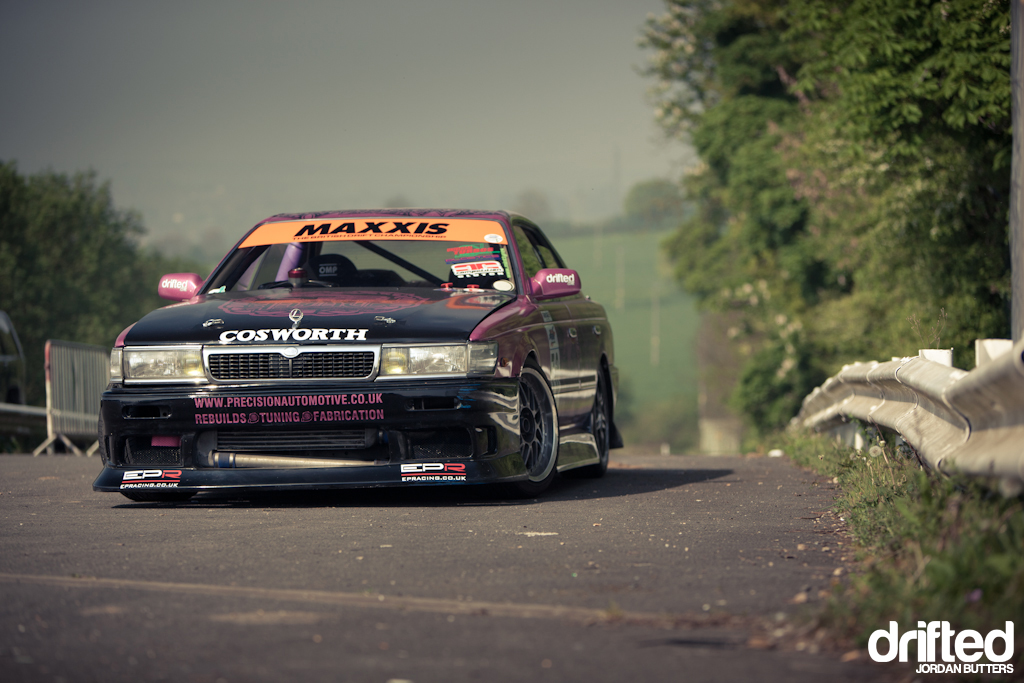 Like any drift fan I have a strange fondness for old Japanese cars. I very much doubt that Nissan, upon penning the final design of the large C33 Laurel saloon, anticipated that it would end up looking quite like this and being used in competitive motorsport in Europe! 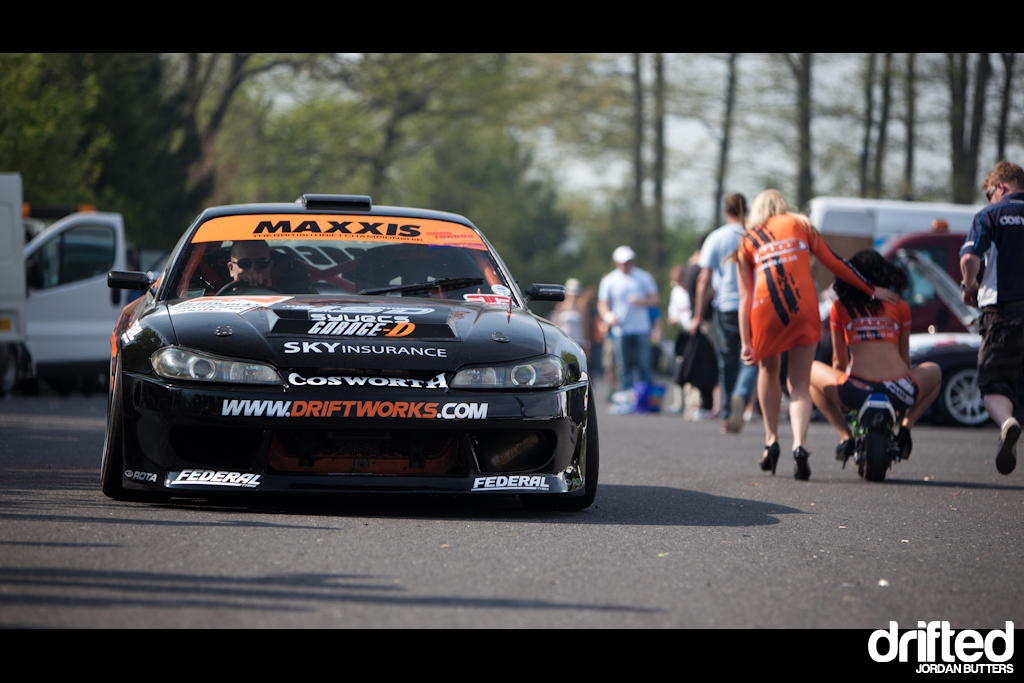 When I snapped this shot of the Driftworks 2JZ S15, rolling through the paddock at Donington Park, looking pretty mean, I didn’t even spot the Maxxis girls riding the mini-moto on the right. I’m glad I captured it though, it balances the aggression of the DWS15 in the shot nicely.

A blessing of having two or three photographers at each event is often that it gives everyone the chance to get away from the track and capture things often overlooked when constantly panning cars going past. 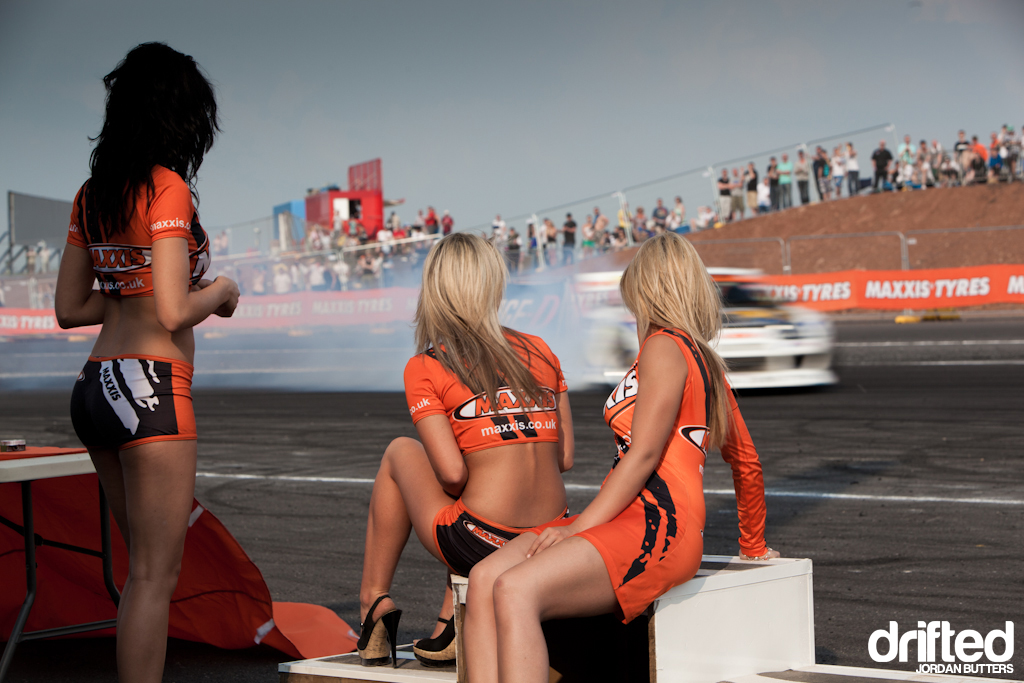 You can observe more when the pressure isn’t there to capture every battle.

Some shots work for the wrong reasons. I had set the shutter speed too slow to capture a sharp shot of Grant Laker and Dan Hall rounding the final bend during the Pro final at Donington, but a slightly blurry image is passable when you notice that the drivers are making eye contact mid-drift.

This year also marked the start of a working relationship with the guys at Falken Tyres Europe and Team Falken UK. This impromptu shoot overlooking the Derbyshire countryside was the first of many. Note for 2012 – must plan photoshoots better!

May came around and along with it the good weather and a warm Japfest at Castle Combe. This event was originally shot for Fatlace & Slammed Society but here’s a shot of an immaculate Z-car from the owner’s club.

The BDC returned to Norfolk Arena in May for round 2. Being my local venue I had the shortest journey of the season to attend but I was apprehensive to say the least. Norfolk was my achilles heel, the one venue that I despised shooting at. I had attended a practice day earlier in the year that none of the shots were released from, they were that bad, and they will remain confined to my hard drive for eternity. 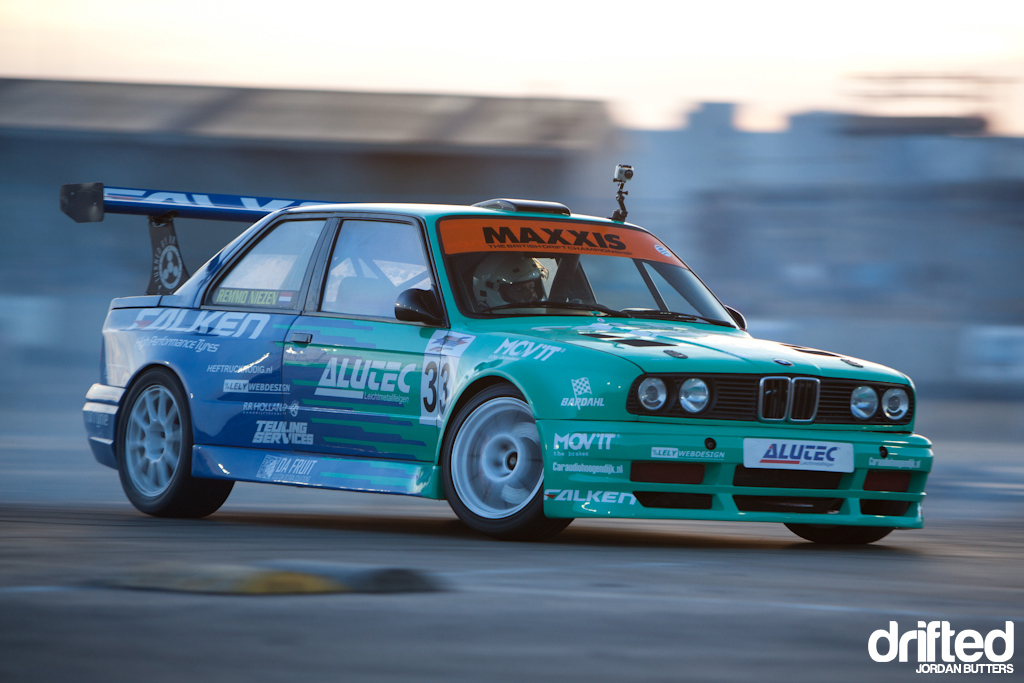 Thankfully the arena was blessed by some awesome light, and some awesome cars – Remmo and his Falken V8 E30 made the journey over from Holland to dominate the event.

The confines of the arena make it a pretty tightly packed affair, for drivers battling it out and for photographers battling for the shots. Panning without getting smears of high-vis vests across the bottom of the shot was getting pretty tricky so I turned the other way and shot head-on into the sun. 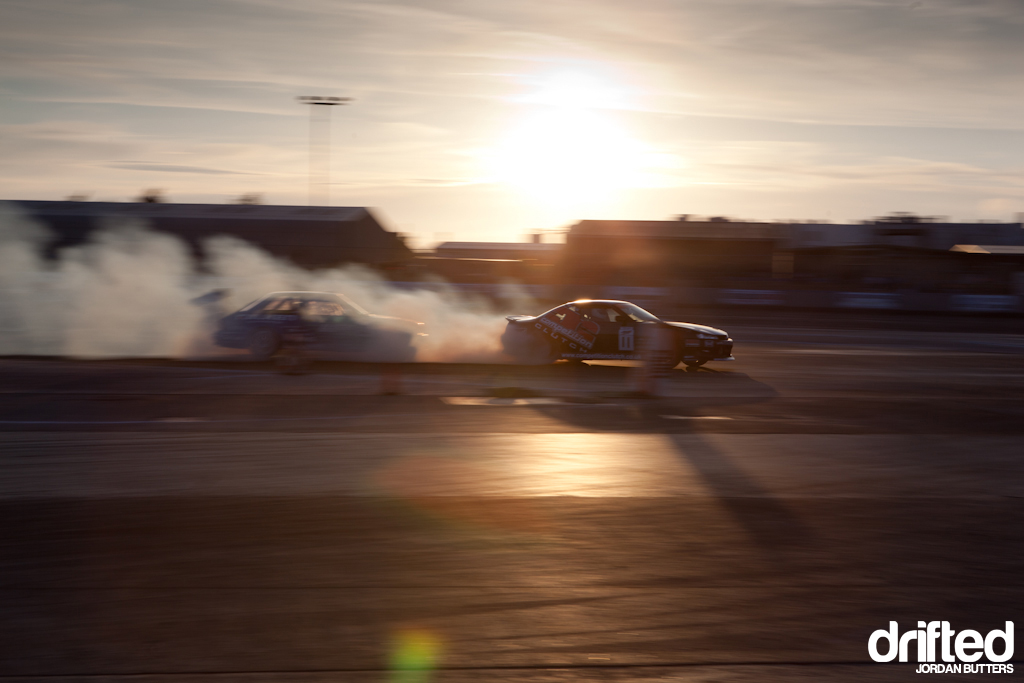 With the sun back-lighting the smoke Norfolk Arena was treated to a moment of almost Californian lighting. I said almost.

Even at this early stage in the championship tensions were mounting. Above, Team Japspeed’s Stephen Biagioni almost cant bear to watch as he acts as spotter for friend Mark Lappage’s runs. 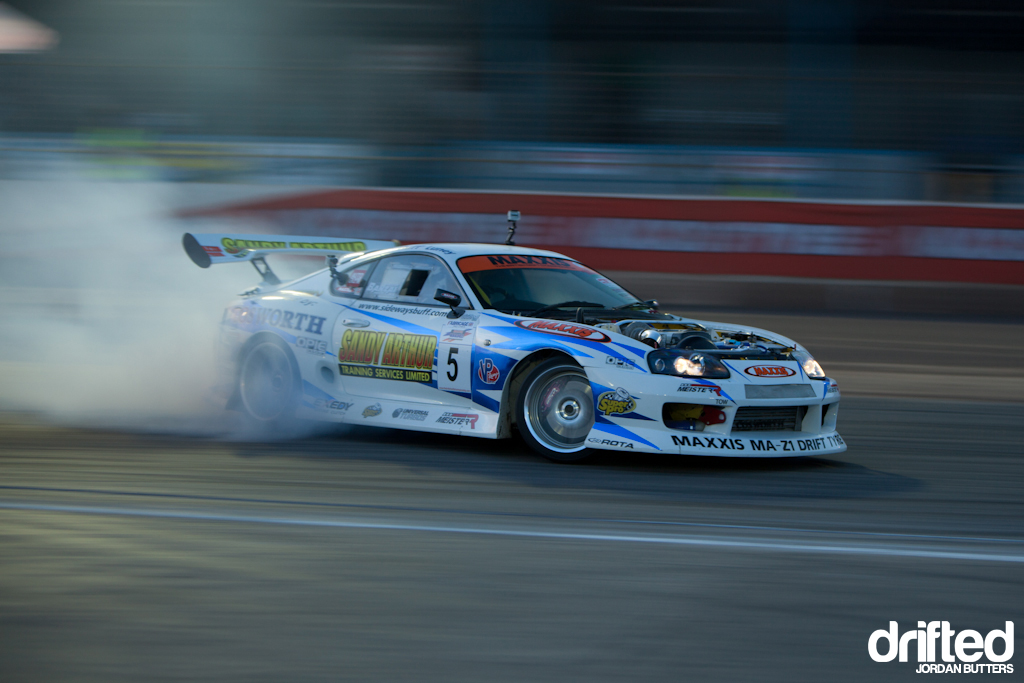 Norfolk Arena also presented an interesting challenge in the form of our first night evening of the season. The arena is however floodlit which creates some really cool effects. The Cosworth SATS Supra above is piloted by Mark Luney and still remains one of the most photogenic cars in UK drifting.

With the end of June came an event I’d been looking forward to for a long time, the N24 race in Germany and my maiden journey to the epic Nurburgring. 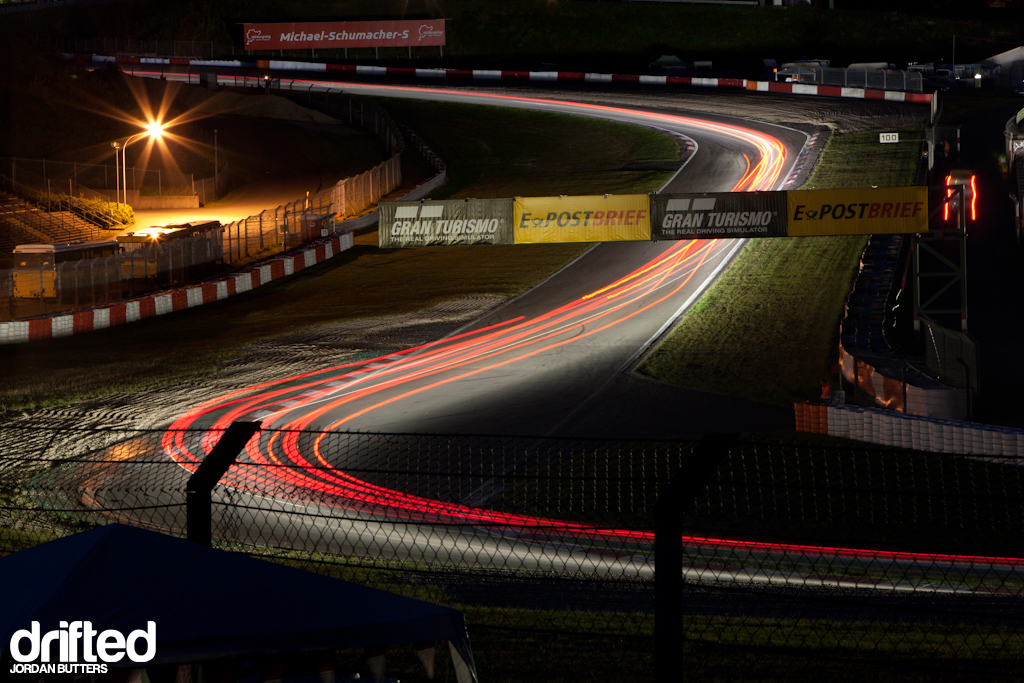 The ‘Ring is a place like no other, I’d go as far as to describe it as an automotive Mecca for any petrol head. Somewhere you have to visit just once, but will end up visiting far more than just once.

The event was sponsored by Falken so I made the journey over with the Team Falken drift team for a weekend of demos, night racing, bratwurst and Jaegermeister. 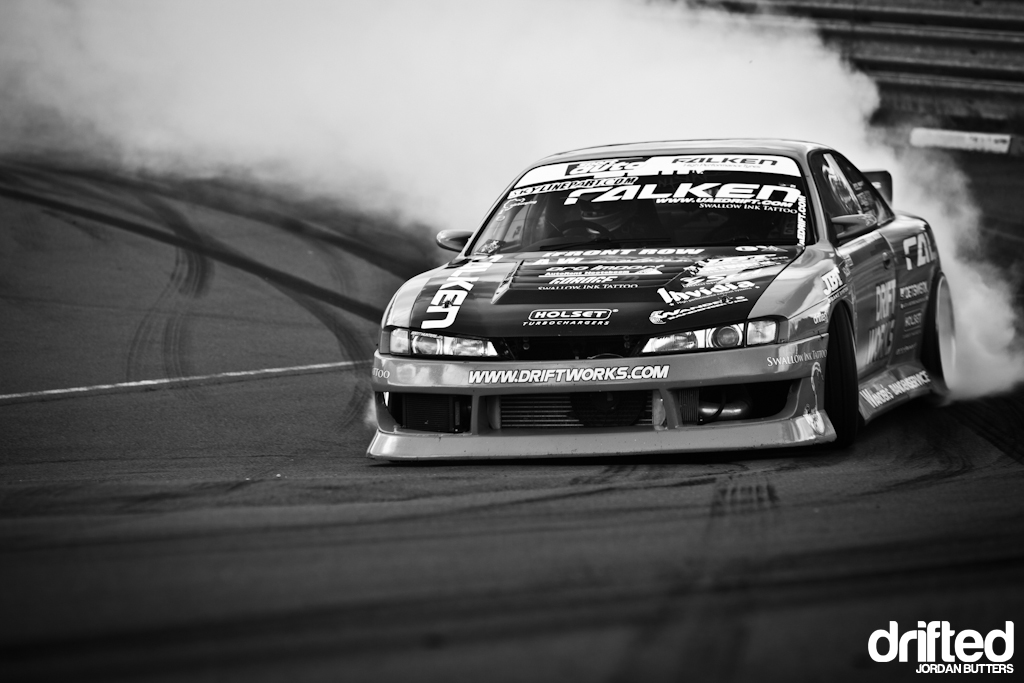 The drift demos went down amazingly well in front of the largest crowd I have ever seen at a demo.

And the drivers were swamped by fans afterwards. It was chaotic but amazing to see drifting getting such a great reaction from hardcore race fans.

One of the highlights of the event for me was getting behind the scenes at an event of this magnitude. 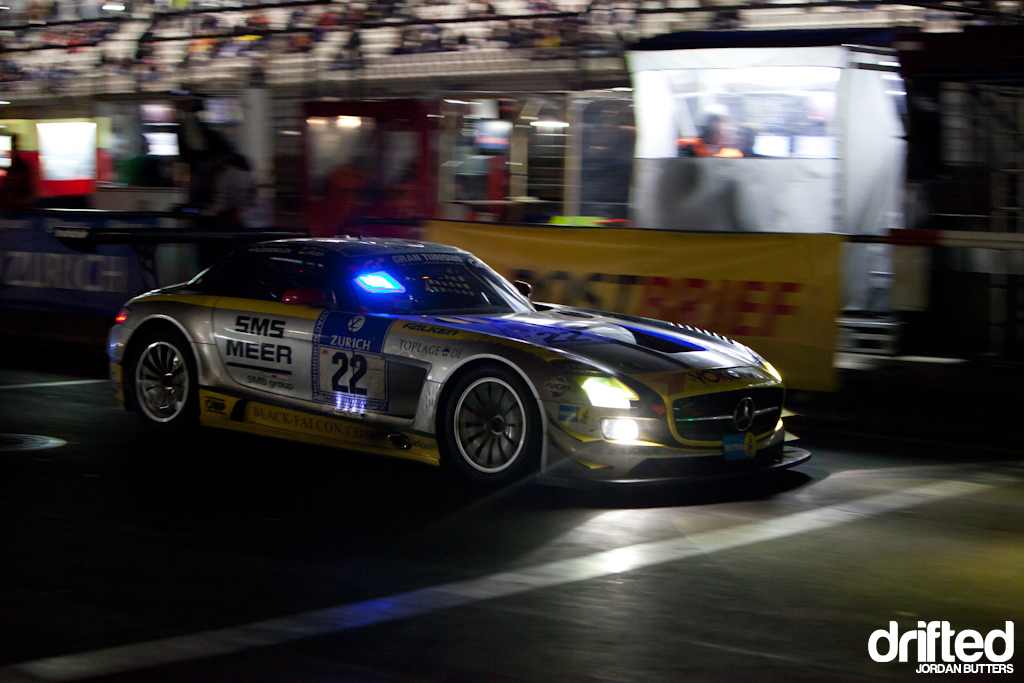 Sadly I didn’t manage to get my application through in time for full trackside accreditation so I focused my efforts of capturing the insanity of the pit lane throughout the night. 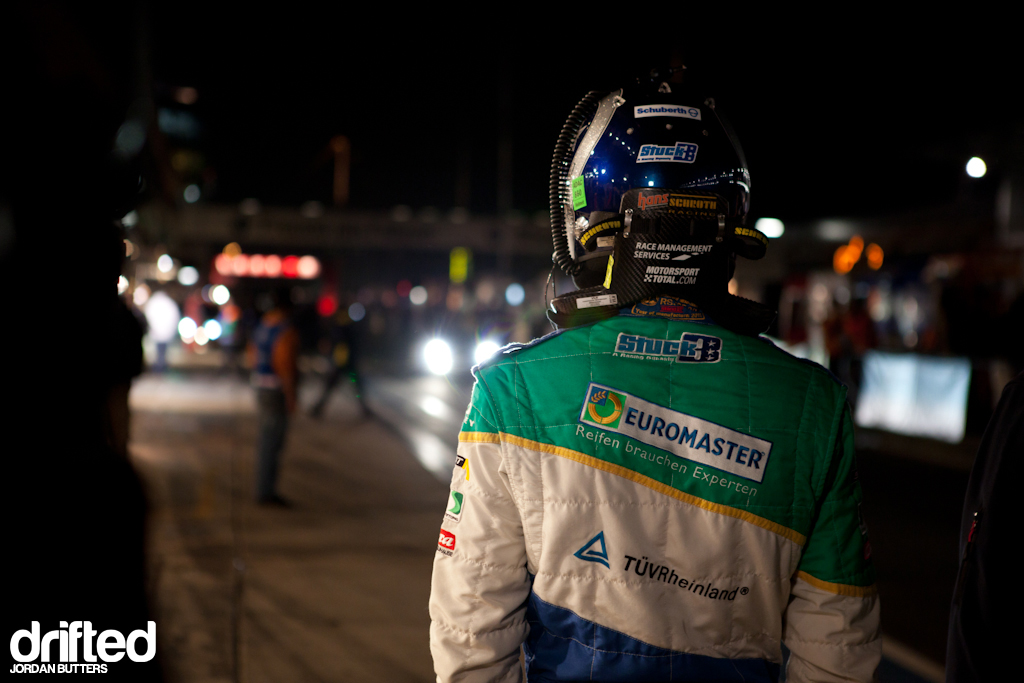 The concept of time runs away from you at the N24, no-one sleeps and nothing stops. Everything works towards the race countdown. It is a full on attack on your senses.

I can’t wait to get back one day, hopefully armed with a trackside pass and a nice 300mm f/2.8 lens to do things justice!

Just a week later and back in the UK I made the journey north to one of the birthplaces of UK drifting – Teesside Autodrome. 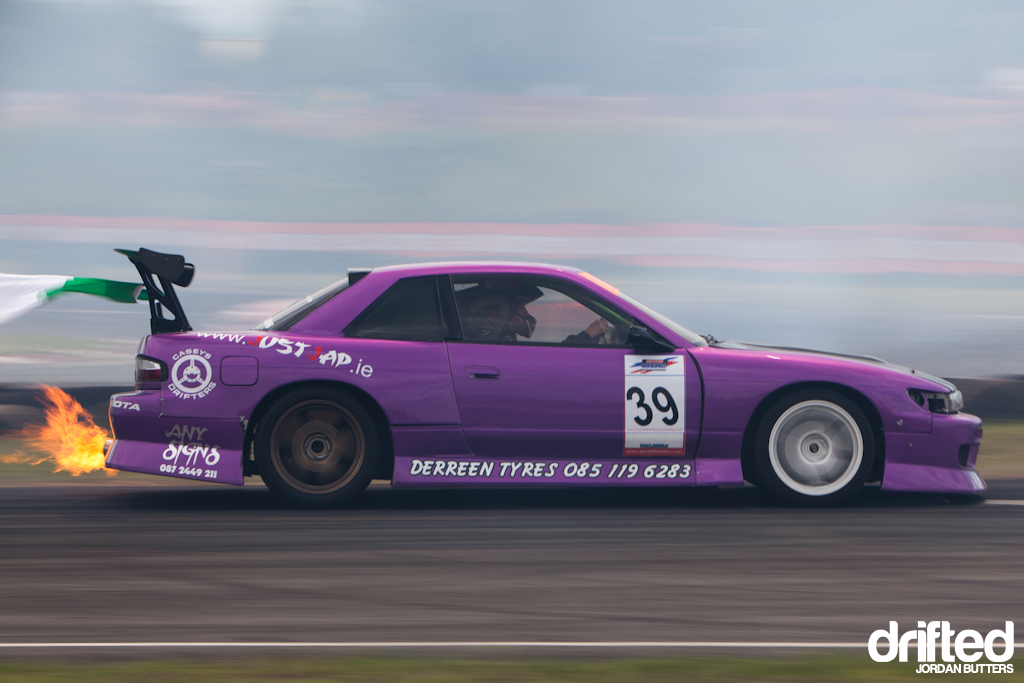 Teesside was the first circuit that I competed at back in 2008 (when I had a go at drifting competitively!). It really is an amazing track, popular with drivers because of it’s combination of fast initiations, long sweeping corners and tight, technical infield.

Unlike the last time I was at Teesside, which still holds the record as the wettest drift event ever (I hear Speedhunters’ Ross Ianson is still drying out), the weather blessed us this year round with glorious sunshine all weekend. 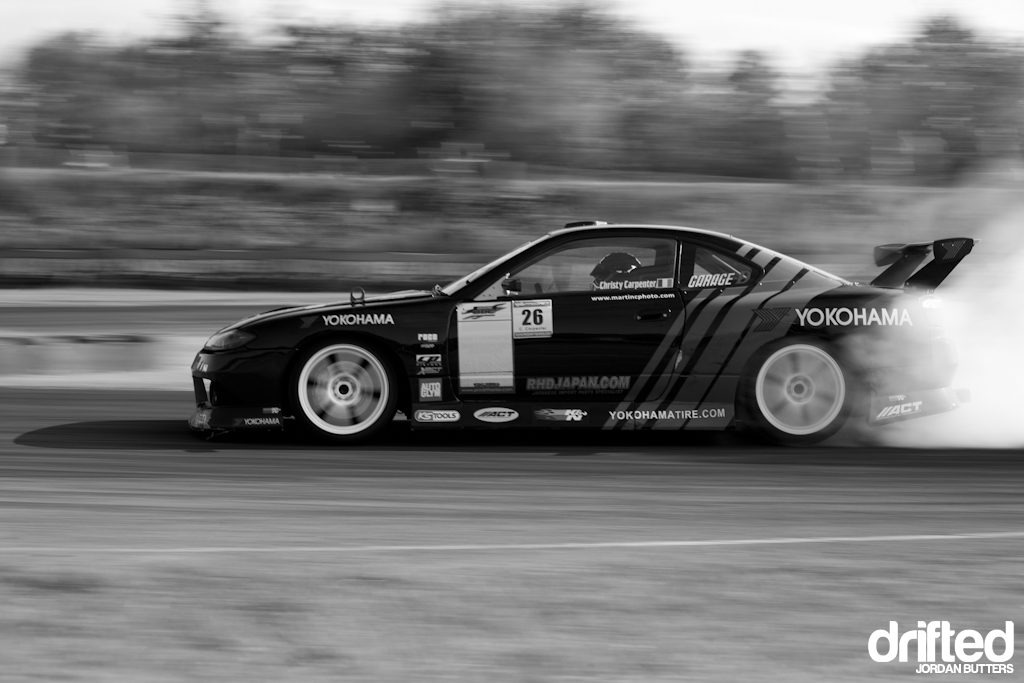 Several Irish Prodrift competitors made the journey to Teesside. This was the first time I’d seen Christy Carpenter’s 1JZ BN Sports S15 in it’s new Yokohama livery. With Christy’s aggressive driving style sending bumpers flying and the 1JZ motor spitting huge flames out of the exhaust it was pretty difficult to point my lens elsewhere!

A problem some others weren’t having. We all love time-lapse clouds though right?! 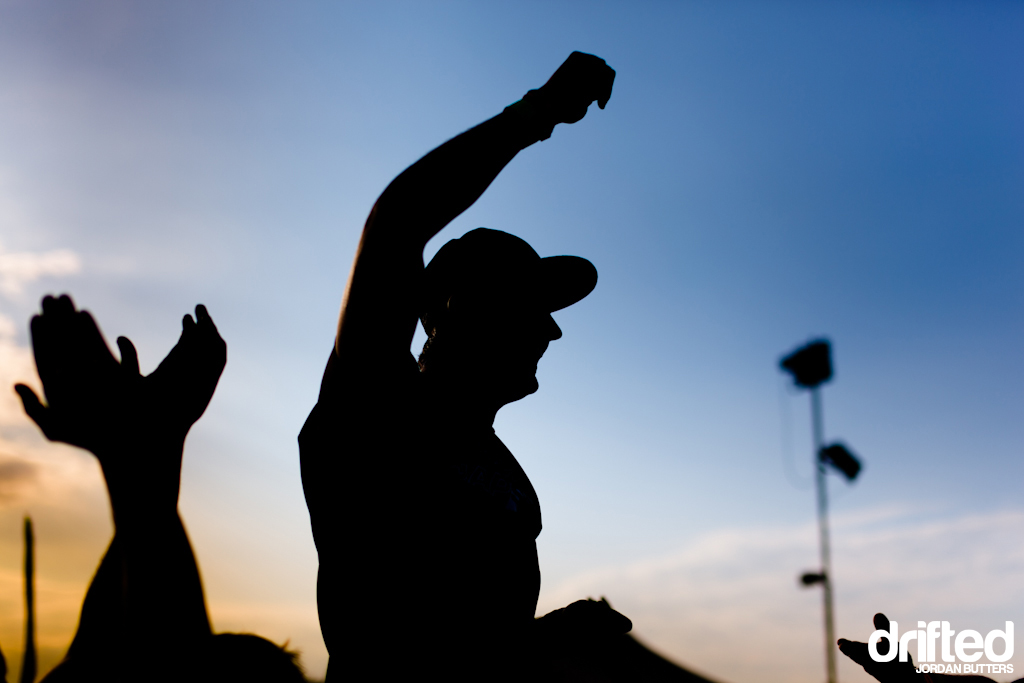 With things heating up at in the title race at this point each and every point claimed is vital. Teesside was probably my favourite round of the BDC in 2011. There was a good vibe in the air and everyone felt on the same wavelength.

The end of July brought with it the UK’s take on Rudskogen’s Gatebil crossed with Ebisu’s Drift Matsuri – the inaugural drift nirvana that was Driftworks Awesomefest at Mallory Park, Leicestershire.

Awesomefest had something for everyone, show cars, drifting, music, food, even MotoX, BMX and skate parks. 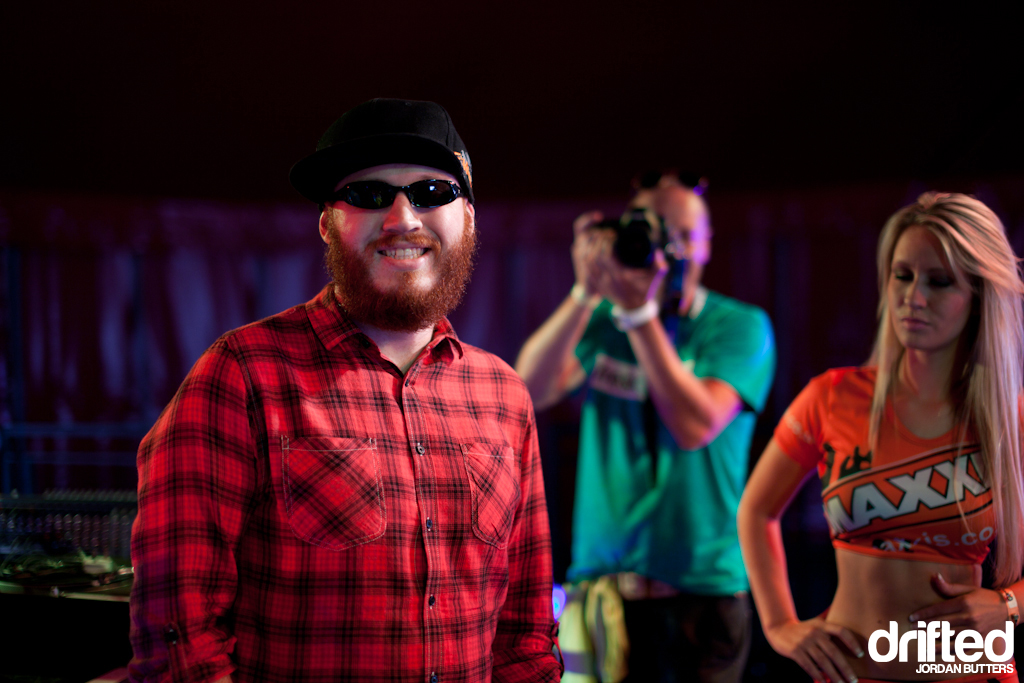 There was even the first annual Awesomefest beard contest, above Bon Bon from the internet models his efforts. 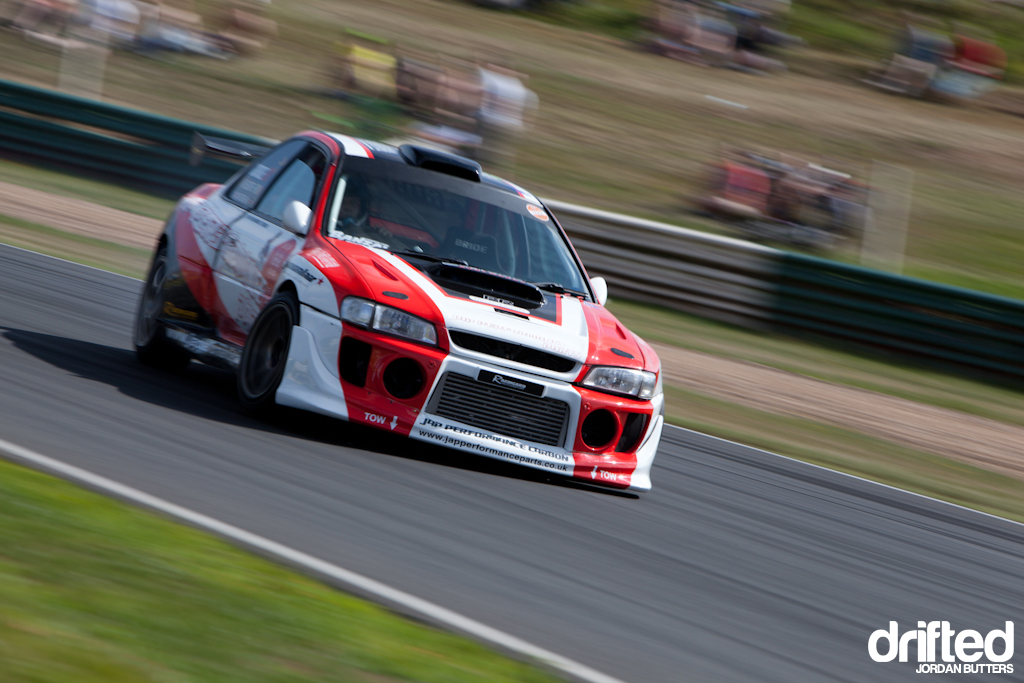 For us media types Awesomefest was, well, awesome. Drifted Crew Ian Gratton, Stephen Brooks, Phil Mann, Daniel Hovdahl and myself were in attendance. Not because we needed that many of us covering the event but because it offered us the chance for a social get together without the pressure of a competition event. Obviously many photos were taken.

But much dicking about was done also.

The D-Mac x Need For Speed x Speedhunters RE86 was making it’s UK debut, and despite some steering rack issues, looked and sounded amazing on track.

With Awesomefest being such a chilled event it was easy to become nonchalant about the quality of cars just sitting around the paddock. Silvia verts are super-rare in the UK, Mitch from Driftgarage.co.uk‘s example looking great in the late afternoon sun. 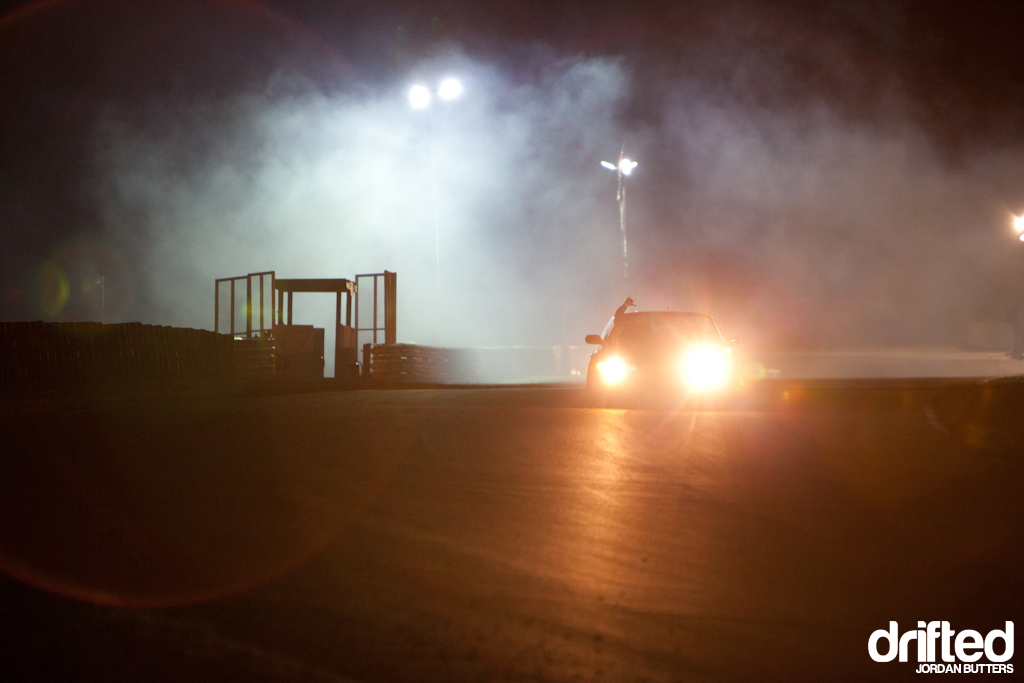 Night drifting is an amazing visual feast; the smoke, fire and noise combining to paint an apocalyptic-esque picture. The London Riots ain’t got nothing on Awesomefest!

Sadly Awesomefest won’t be returning to Mallory in 2012, but the hunt is on to find a new venue, so fingers crossed we’ll be there again next year.

We’re half way through the year and half-way through my favourite shots and moments. In Part II we look at the arrival of Formula Drift stars at Silverstone, drifting a street course in the heart of London, the finale of the BDC season at the Nissan manufacturing plant and the incredible Lousada invitational in Portugal. Coming soon!