With the Semi and Pro classes decided it was time for the Super Pro drivers to take to the track at Teesside Autodrome, Middlesbrough.

Spirits were high, the sun was uncharacteristically shining and warm and the Japspeed Subaru Impreza was back out on track doing its thing again, warm fuzzy feelings were a-plenty. 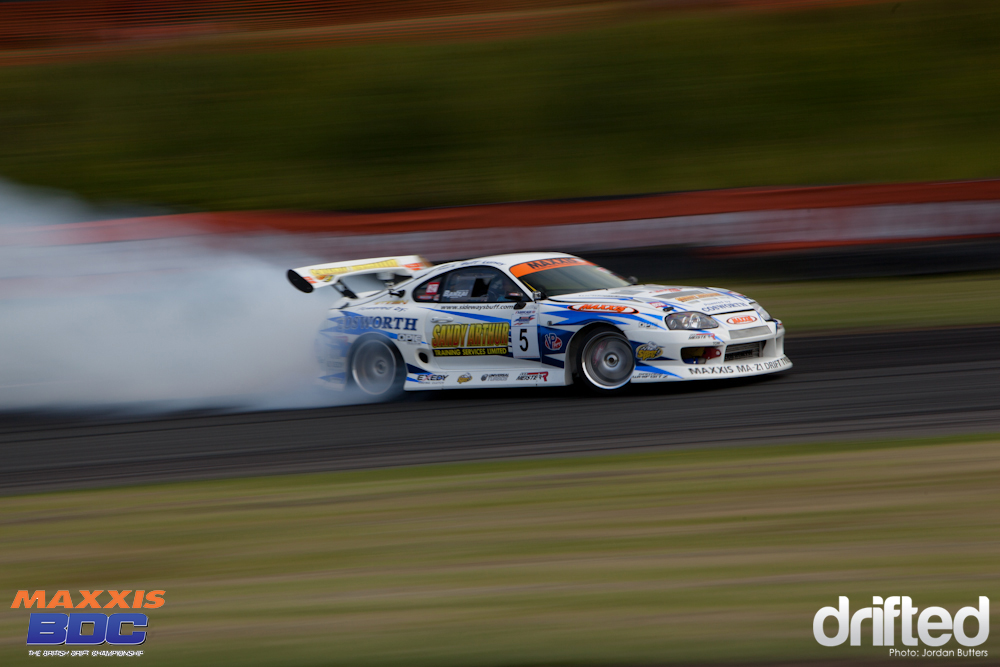 Things were tight at the top of the table heading towards the season half-way point, with SATS Cosworth driver Mark Luney leading the table by just 5 points over Team Falken’s Matt Carter.

Saturday’s qualifying saw some fresh faces at the top of the Top 16 going into Sunday’s battles. 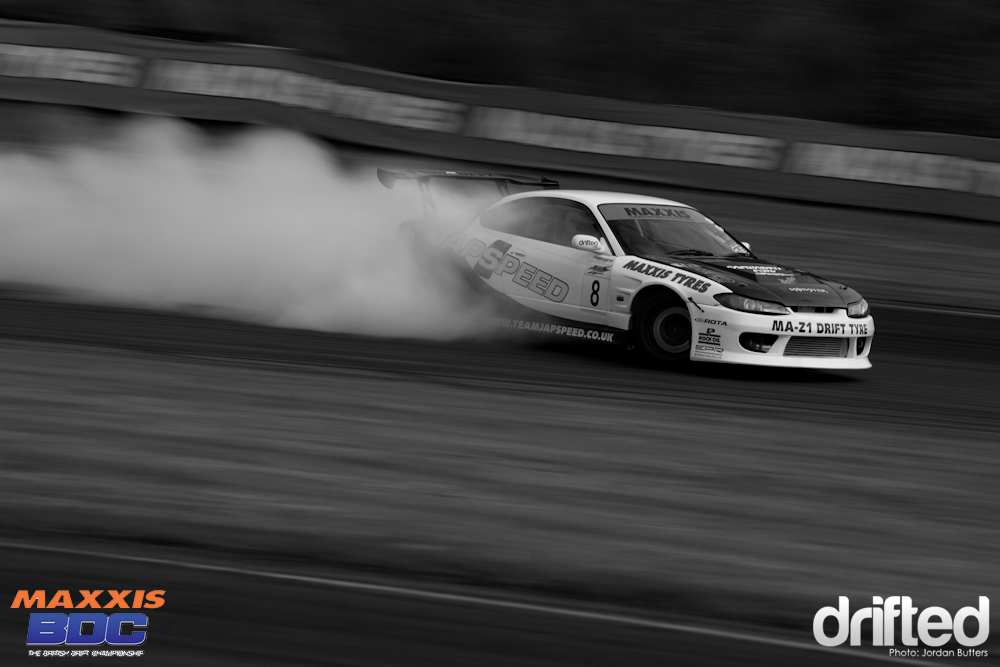 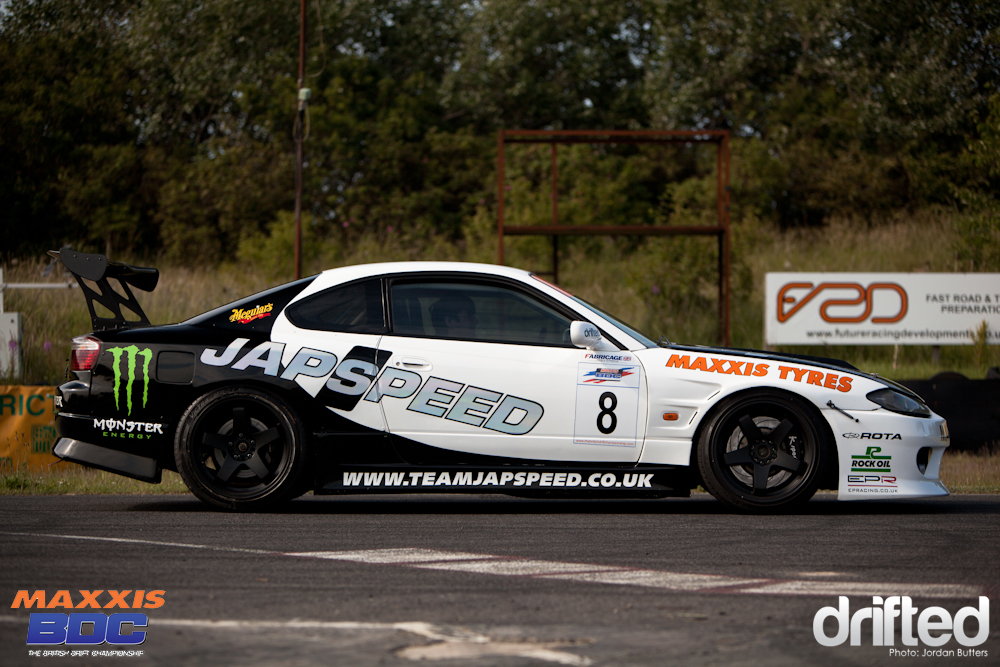 After frying an ECU during practice a hunt of the north-east’s finest scrap yards saw a replacement ECU in place with minutes to spare before qualifying, leaving Paul with no practice before going into his judges runs. Securing top spot was no mean feat! 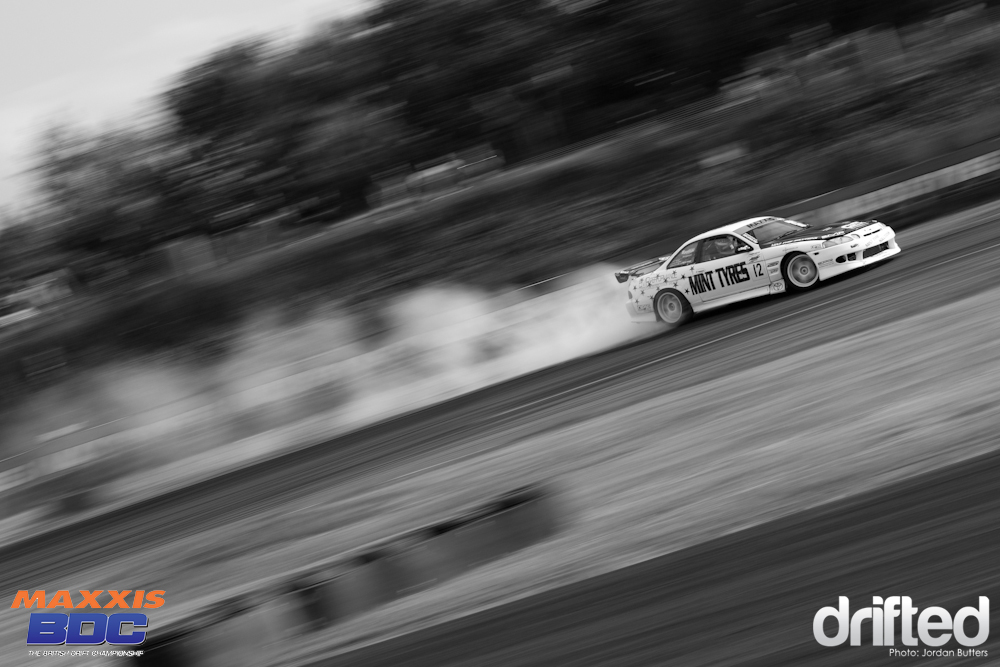 A familiar face in the Super Pro class this season has been Wayne Keeber in the Mint Tyres Soarer. Stepping up to the mark saw Wayne nail his runs with plenty of smoke billowing from the rear wheels, giving him the P2 spot.

Steve Moore‘s immaculately turned out Kouki S14 could be found at P3, Steve’s consistent driving saw him follow the exact same lines run after run in practice. I’m not sure Steve has driven Teesside before, but if not it didn’t show!

The rather unusual machine that is Barry McCann’s Chaser JZX81 certainly can’t be missed on track, this thing sounds angry! Barry drove the technical circuit well and secured the final qualifying spot in P16. 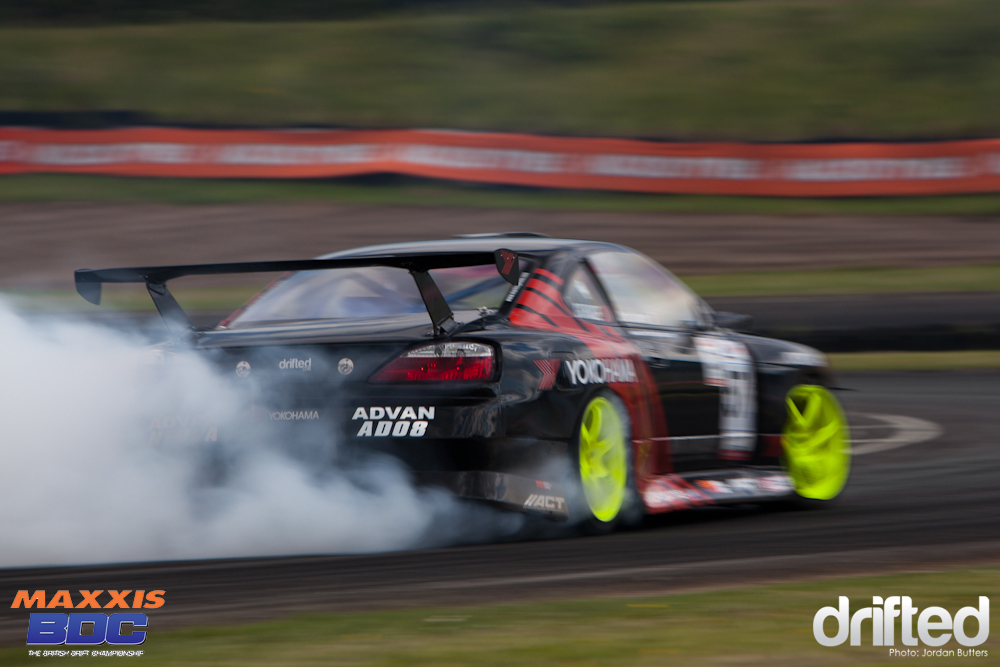 Christy Carpenter‘s super aggressive driving style was apparent throughout morning practice in the Yokohama/RHD Japan S15. There was barely a run where Christy didn’t knock a bumper or side-skirt flying, or wasn’t trading paint whilst practicing twinning.

Qualifying saw Christy take 7th place, putting him up against Scotland’s David Waterworth in the first of the Top 16 battles. 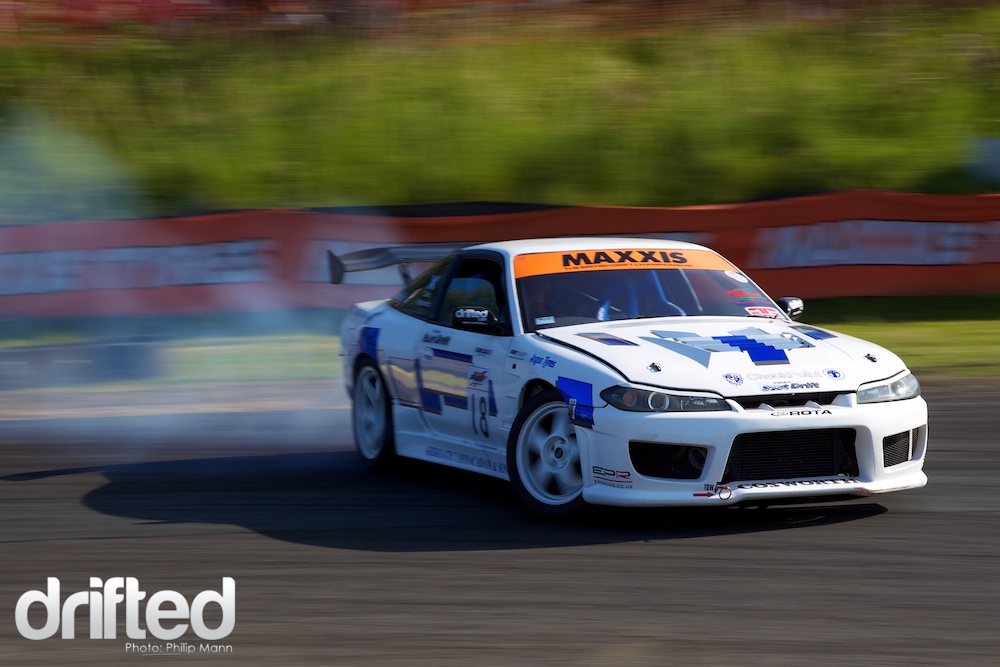 David was absolutely on it all day meaning this would be an early exit for one of the strong contenders at this round at least! 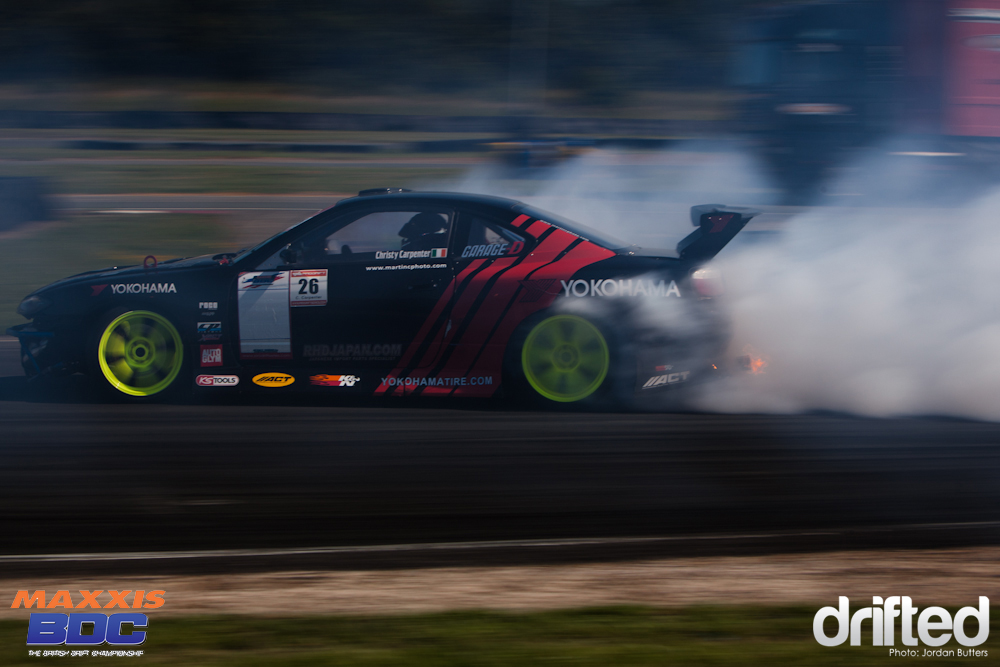 As they paired off it was Waterworth who provided the upset, sending Christy packing. My money was on Christy and the Yokohama S15 before the event so be sure not to take betting advice from me!

….’The Behemoth‘ that is the SATS Cosworth Supra of Mark Luney, who after car troubles qualified in an uncharacteristic 9th place.

After a close first battle the clouds of smoke coming out from Perry’s custom rear fenders completely concealed the final turn as Mark took chase, the Supra washed out wide and clouted the tyre wall on the exit of the track, handing Perry the progression into the Top 8 and the SATS team a trip to the body shop. 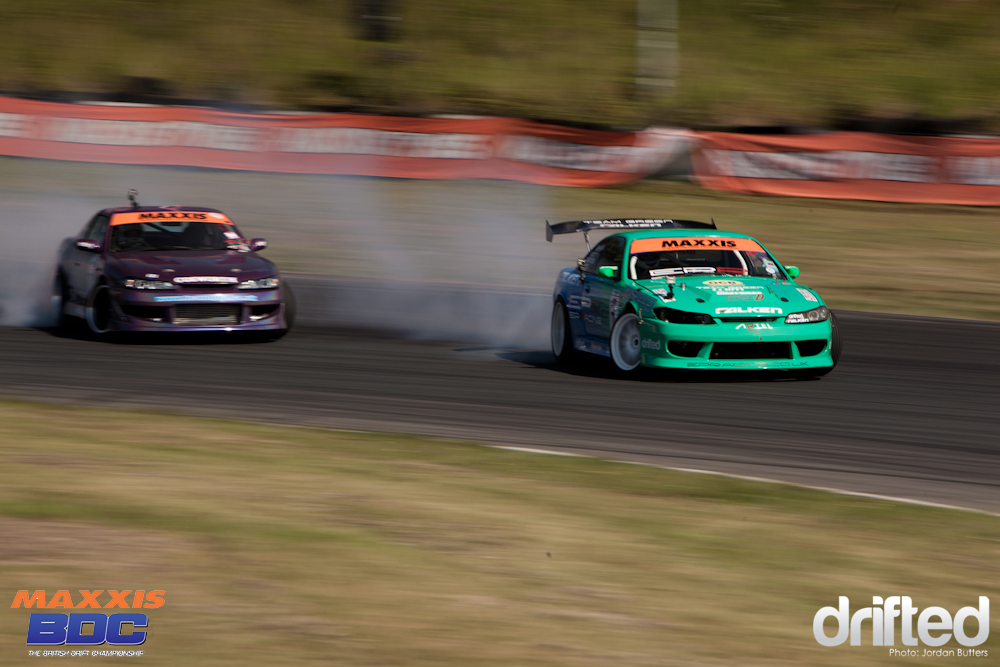 Team Falken’s Matt Carter qualified in 5th spot and faced Grant Laker in the Purple S13.5. The first two battles were too close to call, both drivers giving as good as they got.

After a nail biting OMT Carter progressed through, taking him into the Top 8 and progressing him past Luney in the season’s point standings. 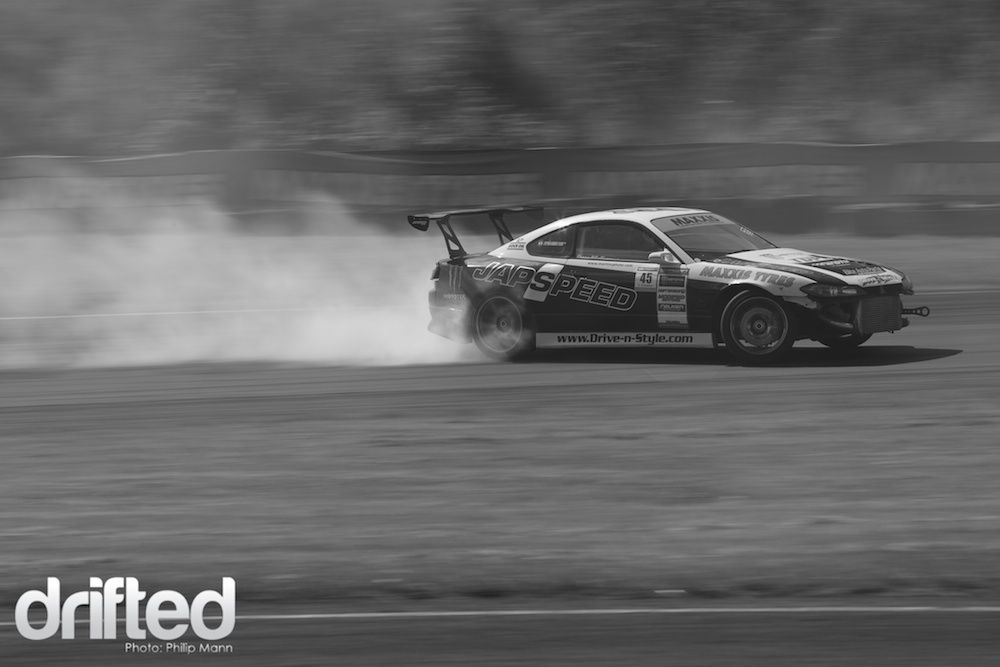 Another Prodrift driver making the journey over from Ireland was Team Japspeed’s Shane O’Sullivan.

After qualifying in P4 Shane was faced against crowd favourite Keith Hammond in the Skyline Owner’s R33 Skyline. Mistakes from Keith saw Shane into the Top 8 against Matt Carter.

Another Shane and another Japspeed S15, Shane Lynch and Ashley Stevens went head to head.

Ashley’s purple 1JZ S13 looks to be behaving itself at long last on the track. 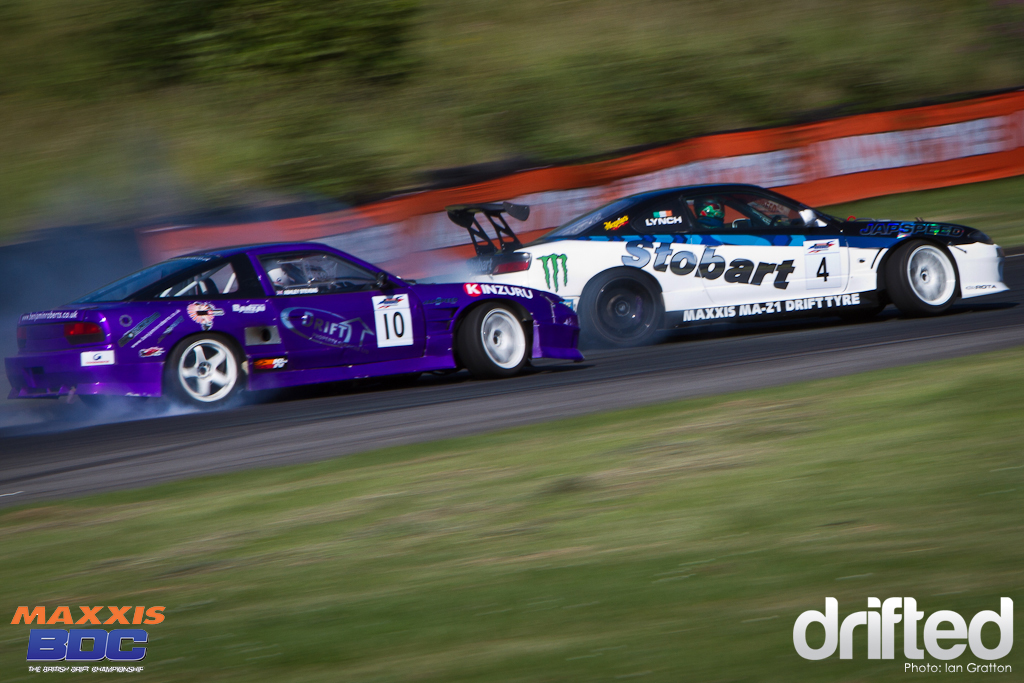 But he couldn’t do enough to match the mighty ground-rumbling twin-turbo V8 of the Japspeed machine.

Lynch heads into the Top 8 and meets younger driver Steve Moore. Steve and Julie Robinson tussled in the Top 16, going OMT, but Steve taking the win after a spin from Julie….

He then went and puts enough gap between him and Shane to seal his place in the Final 4. The high-revving SR20 in the S14 a world apart from the low-rumble and grunt of the V8 S15 and seeming to suit the technical track at Teesside better. 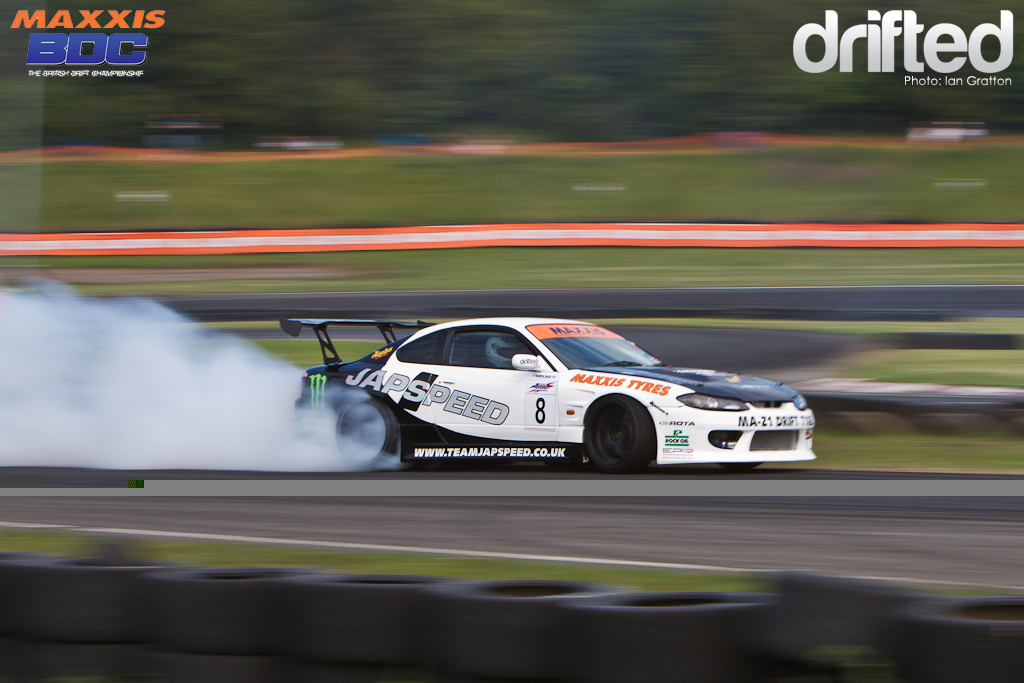 Top qualifier Paul Smith found himself in the Top 8 against Simon Perry and the shock pink Skyline. 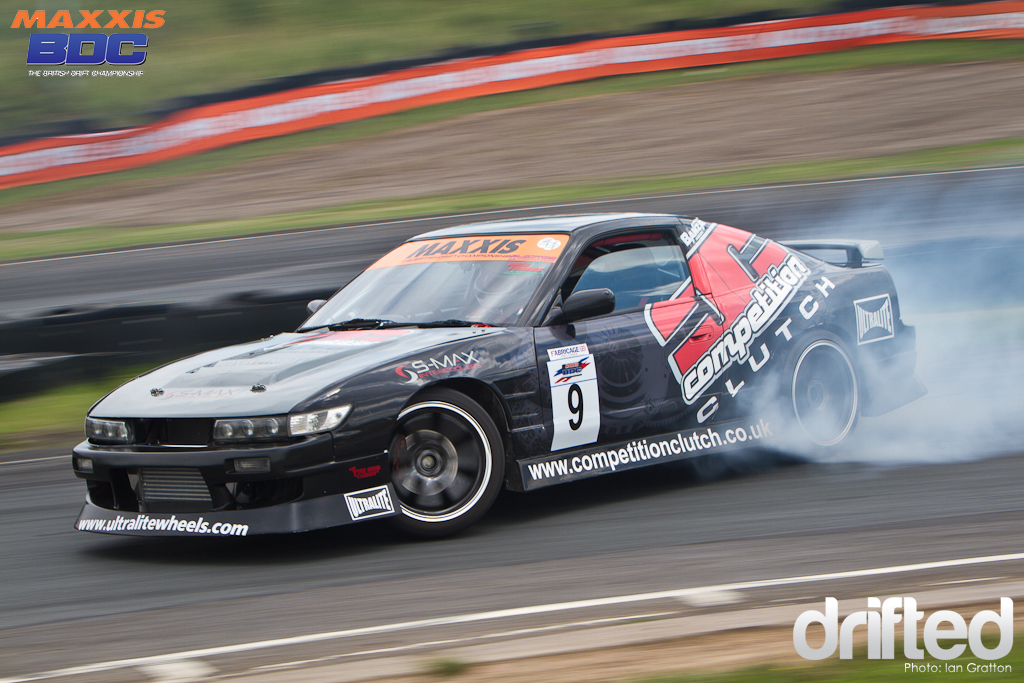 Paul had moved past Gav Cummings, above, who despite not qualifying was promoted into the Top 16 after Barry McCann’s Chaser developed terminal problems following qualifying. 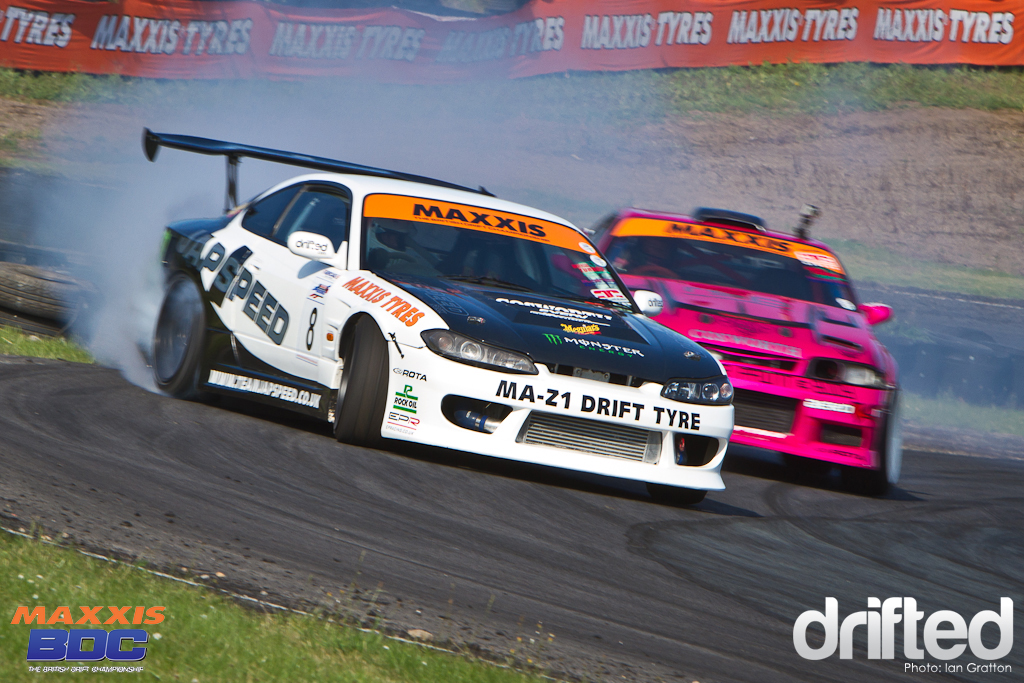 Perry’s Skyline developed problems however and despite doing his best to drive through them he could not match the speed and spectacle of Paul’s runs, thick pillows of Maxxis MA-Z1 smoke heading into the northern sky.

Wayne Keeber and David Waterworth were up next. Soarer vs S13.5. Wayne’s driving is always super consistent and a place in the Final 4 is almost always certain.

Except for on this occasion, Waterworth peddling the S13.5 away from Wayne’s Soarer and booking his place in the Final 4. 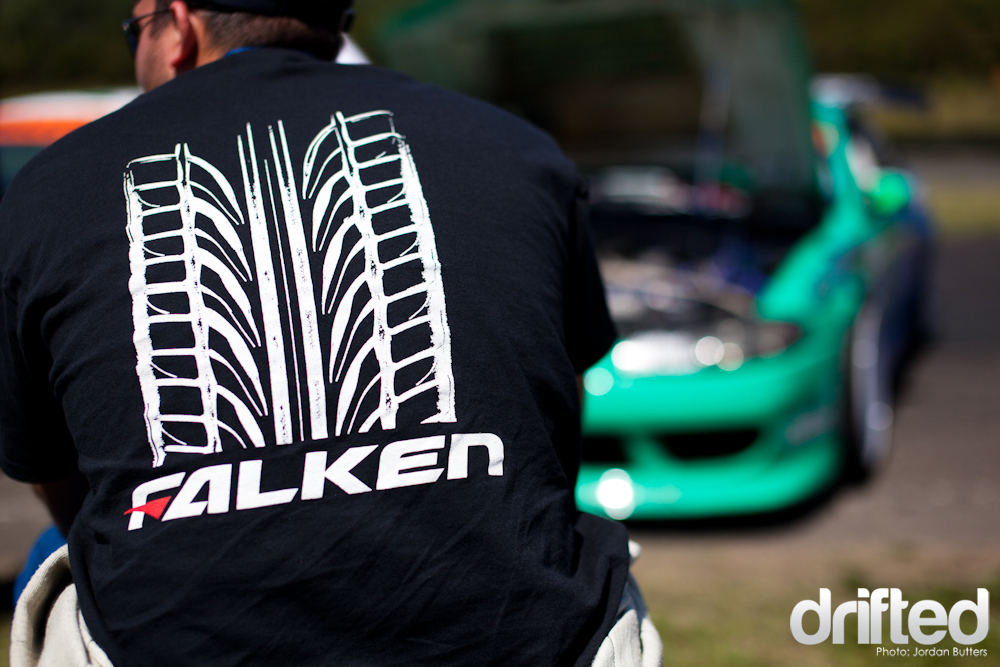 It was Japspeed vs Falken next. Some friendly banter between the two teams over their Facebook pages keeps the competitive edge alive whenever the two teams meet.

Close battles saw Shane’s S15 collide with the back of the Falken S14.5 on the first sweeper, exploding chunks of multi-coloured fibreglass onto the outside of the turn, check out the video here. 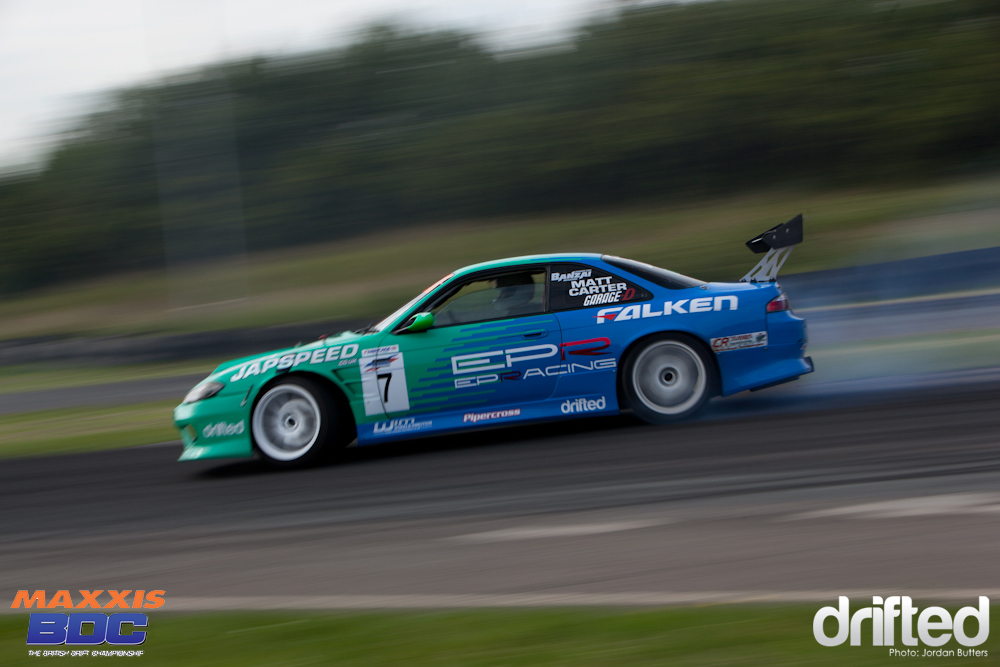 After Matt’s mid-corner protest (see the video above), he wound his window back up and took the win in the run, placing him in the Final 4 against David Waterworth.

Matt was driving on form and having stood on the second level of the podium at every round so far this season had his eye on the top spot. He booked his place in the Final after beating Waterworth.

Steve Moore took on top qualifier Paul Smith in the Japspeed 1JZ S15 in the other Semi-Final, placing his S14’s passenger door right next to Paul’s driver door around the long first sweeper and taking the victory.

After a fierce 3rd-place battle Paul Smith occupied the bottom step of the podium, securing 3rd.

Into the final and with both drivers chasing their first 2011 victory we were in for some close drifting. Moore Vs Carter.

After two runs the judges could not separate them, both cars driving equally well and putting pressure on the other driver to make a mistake. Into One More Time…. 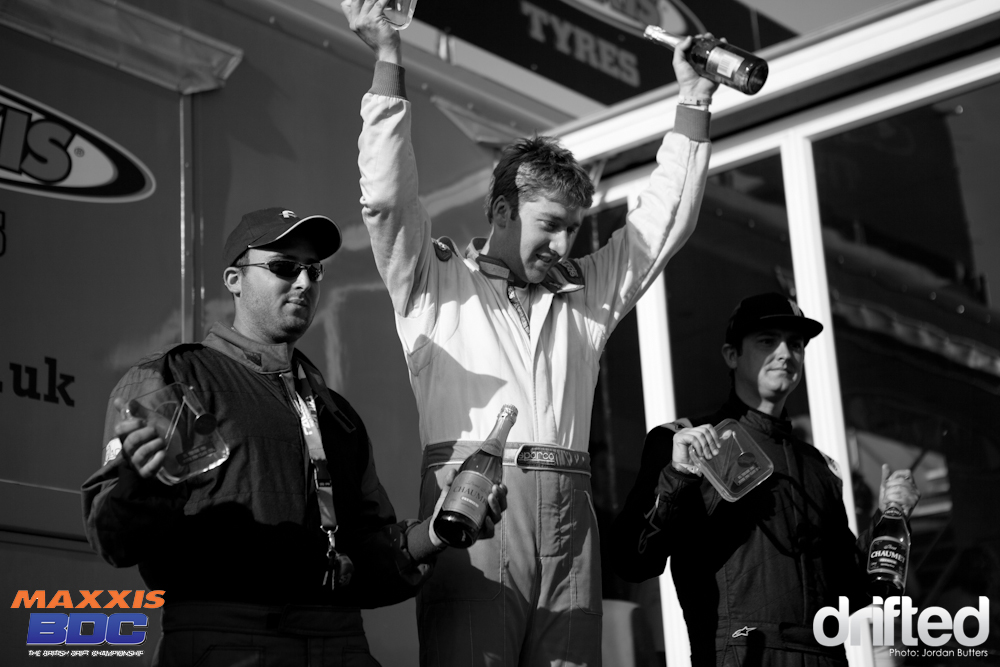 Teesside Autodrome is one of the UK’s favourite drifting tracks, and after a long hiatus the British Drift Championship’s return to the circuit showcased how the level of driving has progressed in the three years since we were last here. And how the weather has improved (some of my clothes may still be damp after the ‘great rain of 2008’ at Teesside, where I was a driver rather than a photographer!).

Going into Round 4 the top of the Super Pro table is still anyone’s for the taking:

Round 5 of the 2011 Maxxis British Drift Championship sees a return to Knockhill Circuit, Scotland on August 20th & 21st!