We head out to Portugal for 2 days (and 1 night) of European Drifting.  Find out what happened (quite a lot) after the jump….

On Friday the 8th of October we set off on a mammoth journey to cover what was set to be quite an event.  Meeting up with Mark Buckle (aka Sweeps – British Drift Championship Organiser) and wife Sarah,  Darren Matthews (British Drift Championship track coordinator) and Jord (of Drifted and BDC Resident  Judge) at Stansted airport we jumped on a Ryanair coach with wings for the 2 hour hop over to Porto in northern Portugal.

On arrival at the airport we quickly locate a gaggle of Irish drivers and their pit crews trying to figure out the next part of their journey from the airport to Lousada, a small town that forms part of the Porto district.  We had traveled from a surprisingly warm and dry UK to a very wet and gloomy Portugal.  After a short while we were ushered into mini vans and our drive to the circuit was underway.  It was now the early hours of Saturday morning and with everything pitch black very difficult to get an idea as to where we were going but 40 minutes later we left the Portuguese motorways and pulled into the sleeping town of Lousada.   The track is located in the southern end of the town itself – that’s right – its ‘in’ the town and not in the middle of nowhere like so many motor sport venue’s seem to be.  The Portuguese truly love their motor sport.

Our first port of call was the pits which was located on the opposite side of the road to the track.  Many of the drivers had not see their cars since they were loaded up onto 3 transporters that had made the journey from mainland UK, Ireland and France earlier in the week.  A couple of the cars had actually managed to get a broken windscreens from a very rough ferry journey across the Bay of Biscay but fortunately damage was minimal due to the fact the transporters had been strapped down – many other passengers on the ferry had been told their cars were written off as the rough seas had tossed their cars around in the boat like toys!  A large Irish contingent were already present in Lousada and they were already in high spirits and ready for an awesome weekend of drifting and partying.  Even at this time of night the pits was a hive of activity with various Portuguese, French and Spanish drivers working away on their cars in preparation for the next two days of competition.  At this point we were loaded back onto the minibus and taken to a small restaurant for a bite to eat and to meet up with the Team Japspeed folks. An hour or so past and hunger pangs gone we would emerge and head back to the hotel to catch some much needed shut-eye in preparation for tomorrow…….or today being as it was now nearly 2am.

Before I knew it 7:45am rolled around and we were getting ready to get back to the track. We were greeted by blue skies but a track that was still soaked from almost a week’s constant rain.  Priorities first we fueled up with various ham and cheese-based breakfast offerings in the nice little cafe near to the circuit.  Lousada isn’t a tourist hot spot so very few people speak fluent English which made the job of trying to get coffee with milk quite tricky.  Our first attempt leading to us being served tiny little cups of Portuguese Espresso rocket fuel which soon woke us up.  I managed to get one of the Portuguese organisers to write down ‘Large Coffee with Milk‘ on a piece of paper which proved to be an invaluable tool for the rest of the weekend.

Second port of call was the pits to catch up with the teams and drivers prior to starting the briefings and car scrutineering.  It was pretty obvious that the Irish WKD Imports team were feeling a little worse for wear.  The shopping trolley full of empty Super Bock beer bottles told me everything I needed to know. 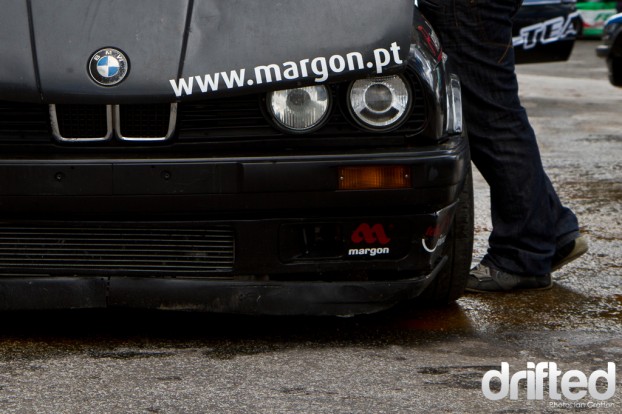 Seeing the pits in daylight for the first time really drove home the sheer scale of the event.  With 48 registered drivers for the Spanish vs. Portuguese competition on the Saturday and the main KD Euro Drift event on the Sunday there was some serious machinery on display.

There was the usual array of Nissan S and R bodied cars along with a serious number of BMWs ranging from E30 coupes with M power S54 engines, V8-powered E30 coupes, E36 coupes, compacts and 4 doors with turbos, an 600bhp E46 M3 fitted with a centrifugal supercharger and a fully race prepped E39 M5.

Team Japspeed’s Danny Eyles (absent from the pits during this photo as he was receiving an Oxygen booster in the local hospital!) and Steve “Baggsy” Biagioni’s cars were ready for action. Baggsy usually pilots the Team Japspeed Subaru, however it is currently undergoing some big changed for 2011 so the team’s ‘spare’ car was present, an SR20 powered S14 Silvia. 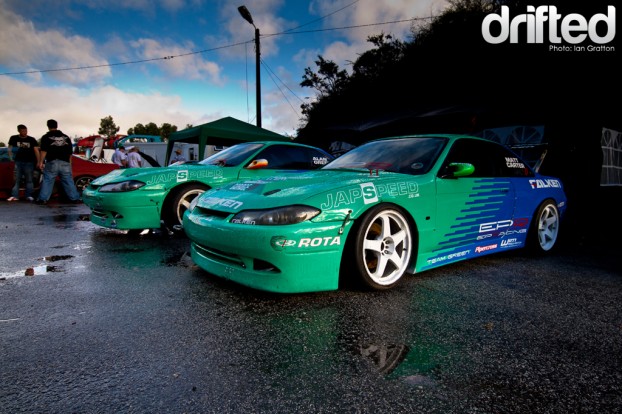 Despite the broken windscreen all was calm in the Team Green/Team Falken tyre camp.  Matt Carter is no stranger to Lousada having taken the win in last years competition.  Could he do the same again this year? Only time would tell.

It was also really nice to see that a few AE86’s were on the list of cars as they are somewhat absent from the UK competition scene these days as the rest of the field has become addicted to huge amounts of power to get the job done.  You won’t find a 4AGE under the bonnets of these cars though – the orange car above is powered by a very distinctive sounding Audisport 10v 5 cylinder turbo normally found in Audi Group-B car (if you are too young to remember the hard charging Audis listen here), the other powered by a 7M-GTE normally found in a Mk3 Toyota Supra.

Down towards one end of the pits you can’t help but notice the KD Racing/Dark Dog racing tent and race transporter.  The KD Race team were going to be running their BMW E36 Coupe in the weekends competitions but they also had something a bit special parked up.  This is an ex-Team Orange GC8 Impreza that I believe was driven by Naoto Suenaga on D1GP – just stunning.  Shame the car would not be used in competition this weekend.

After some time Sweeps, Jord, Darren Matthews, and the French judge Fabrice Best managed to gather the drivers in one place for the briefing.  With no common language everything that was said in English had to be translated into Portuguese, French and Spanish. 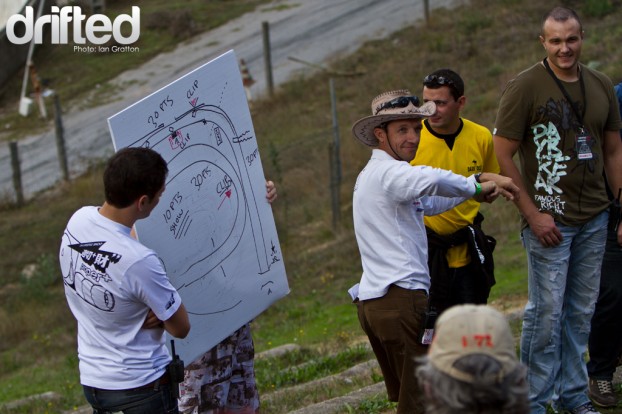 Sweeps managed to avoid translation of ‘rear clipping point’ by gyrating his butt – judging by the laughter that followed I think the non-English speaking competitors (or ‘Pilots’ as they are referred to in Portugal) got the idea.  The judges also expressed their desire to see drivers drifting in close proximity to each other during practice as this is something that was lacking during practice at last years event.

Fueled on strong coffee and Dark Dog energy drink Darren Matthews was rigged into the radio system so he could communicate with marshals and judges around the circuit from his often lonely position at the start line.  The briefing was over and everyone assumed their positions out on the track and we were off.  Lets take a look at the course. 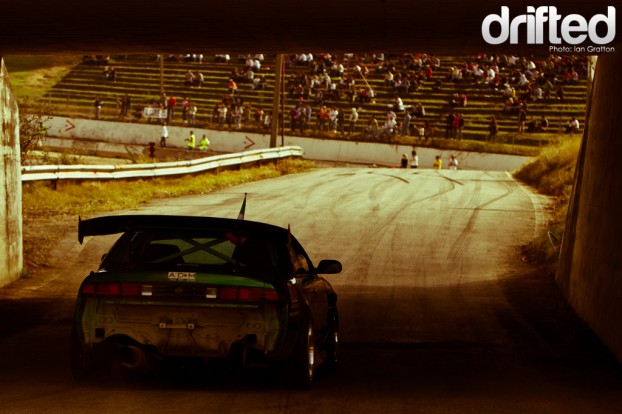 Danni Murphy sets out from under the bridge towards a slight hump on the crest sending the car light before the drop into the first long left hand corner. 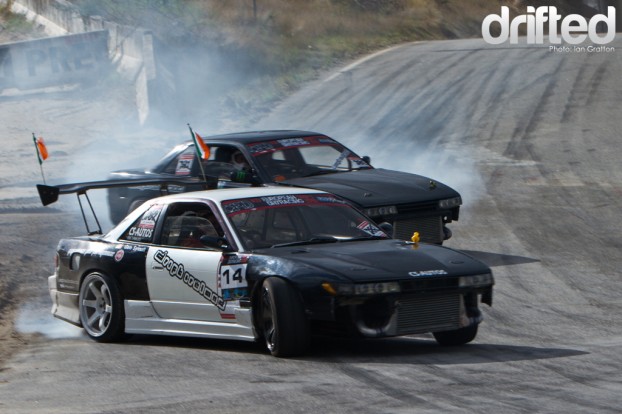 As practice progressed and people found their feet many drivers were initiating just over the crest.  Brothers Ciaran and Mark Synnott were showing long and early entries right from the off hugging the outside of the circuit.

Through the left-hander at speed and straight out to the first rear clipping point on the outside edge of the armco-lined straight.  Hugo Fernandes and his JZZ30 Soarer made a pretty good job of making sure he hit this clip every run he made through the course, fully testing his Run The Wall decals!

A quick flick back for a left-rear clip as shown by the WKD Imports S15 fronted S13 and Frederico Ferreira in this truly awesome carbon clad BMW M5.

Followed by another flick back over to the right of the circuit for the entry into the hairpin demonstrated by Ashley Stevens.

Round the hairpin being careful not to drop too far into the dirt.  Mark Synnott shows just how deep the dirt is if you take a wide line.

France’s Benjamin Boffard shows us a nice manji down the short narrow straight to pick up some speed into the final right hander. This narrow section of the course would prove to be crucial for the judging of the event. Separating the drivers who could make it in one move from those who had to transition a few times before the next corner.

Piling on yet more speed as the last right handler straightens out and the judged part of the circuit ends.  The red oxide R33 Skyline of Christian Lewis was putting on a good show all weekend.  Its only the 3rd time he had drifted.

And thats the course.  Drivers then follow some of the twisty sections over and under bridges in the back part of the track before rejoining the queue and awaiting Darren Matthews’ multi-lingual hand signals to start again.

The practice session was pretty immense.  All drivers had taken on board the judges desire to see cars in much closer proximity and it wasn’t uncommon to see trains of 4, 5 and 6 cars attacking the course.

With free practice for the evenings event complete we get a short breather to take on some food and drink.  A Corolla owner myself and being very passionate about AE86s I was eager to try and find out a little more information about Isac Pedroso’s Green 7M-GTE powered AE86.  At this point I realised there would be a fairly significant language barrier that would stop me in my tracks.  Never the less Isac lead me into their pit tent and proceeded to offer me beer and BBQ’d Chorizo for which I was very thankful having not eaten for almost 10 hours.  Jord, Sweeps and wife Sarah had already made themselves at home inside the tent.  Throughout the entire weekend our Portuguese hosts had made us feel so incredibly welcome.

Stay tuned for Part Two of our trip – Night Drifting and the Portugal Vs Spain Grudge Match!