The Team Japspeed 1JZ-powered Impreza is likely very fresh in your minds for all the wrong reasons at the moment.  The car was stolen from a show at Santa Pod on Saturday the 11th of June.  Fortunately the car was recovered on Monday 13th of June partly down to the truly collaborative effort from fellow championship drivers, fans, car enthusiast forums, Facebook, Twitter and the combined efforts of two county police forces – not to mention a slot on the national evening news on the BBC.

The car currently looks a bit sad for itself after the criminals that took the car made an attempt to ‘tone down’ the looks of the car and make it look a bit more inconspicuous – what where they thinking? –  removing some stickers and the rear wing hardly stop it from being a fire spitting 500+bhp race car without any number plates being used in plain sight on public roads.  Imagine for yourselves where these people would fit on the evolutionary scale when monkey changed to man. 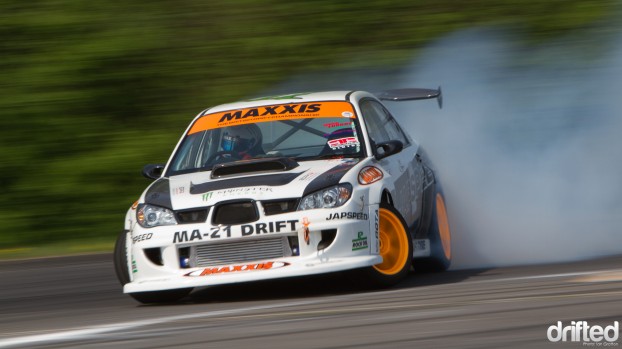 We are obviously over the moon that the car has been recovered and to show our love we decided we’d give you guys a nice wallpaper of the car being put through its paces by Team Japspeed’s Baggsy at round 1 of the British Drift Championship at Donington Park earlier this year.  The car will hopefully be ready to take part in Round 3 of the British Drift Championship at Teesside Autodrome July 2nd/3rd so please come along and show your support!

When you click one of the links below the image will open in your browser in a new window/tab.  Right-click on the image and save to your computer.