Waking up on Sunday morning at 7:00am to the sound of my alarm clock definitely didn’t put me in the mood to get up, but then I remembered that soon I would get to smell burning rubber. That would put a smile on my face.

At around 8:00am we all pulled up to a place in Atlanta to burn some tires. Right out of the box these guys start putting on a show for me. They definitely don’t take to much time to start getting sideways.

Nicholas Hart aka FriskyWalrus (don’t ask) got some good angles after everyone else had their turn. Nicholas has had his 1993 240SX hatch for about 8 months now and has been drifting since day one. This guy is doing it with the bare minimum, with upgrades like a 3 inch cat back exhaust, Skunk 2 Springs and some cheap tires. This kid will have fun no matter who is around.

Now, I don’t even know what to say about this guy. He is a character truly on his own level, and he knows how to have fun no matter where he goes. His name is Bryce Harris and he’s from the South Atlanta area as well. He will get out and roast a set of tires quicker than anyone I know, the picture above was from his first run! Unfortunately his day ended soon with a cracked radiator.

Bryce has been drifting his 1991 240sx SE coupe for about a year now. The car has aKA24DE, K&N Cold air intake, Buddy Club spec 2 exhaust and Megan full track coil overs. He plans for more upgrades in the near future, and also to get to some events in the area. I asked Bryce why he does this and he explained:

“I don’t drift to impress, I do it for fun. It’s something I enjoy. Some people like to grow plants. Others make stuff out of wood. I prefer to slide across the asphalt, making the apex feel as if a 2700lb car is about to leave its 19 year old parts as ruins on it. Reaching the innermost part of the apex where less then a foot could print that next receipt of a repair bill. Experiencing the split second of silence that overcomes me as I pull out and away from the turn… I still question why I drive my car like a suicidal mad man, but to me its just… well, love.” 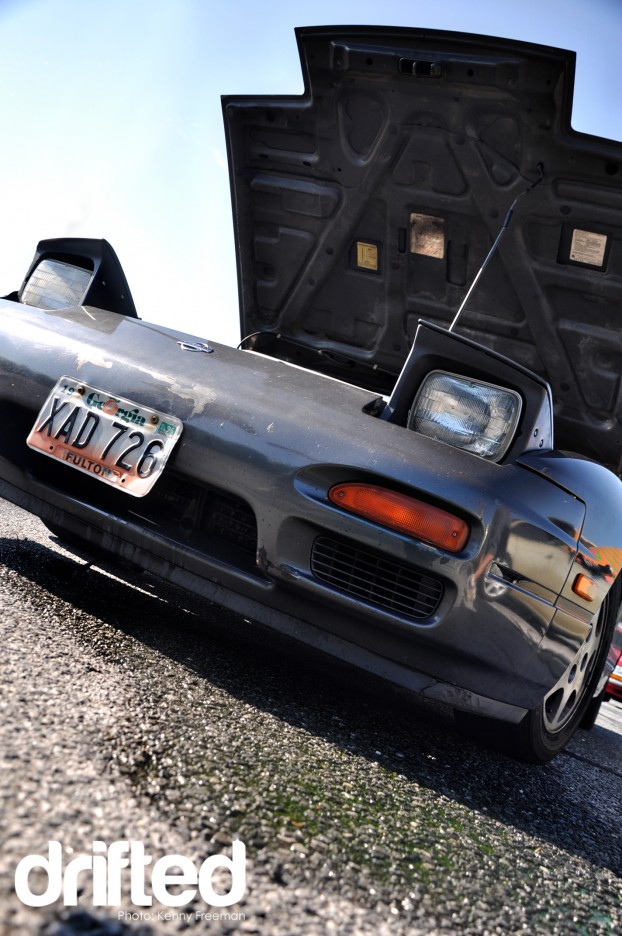 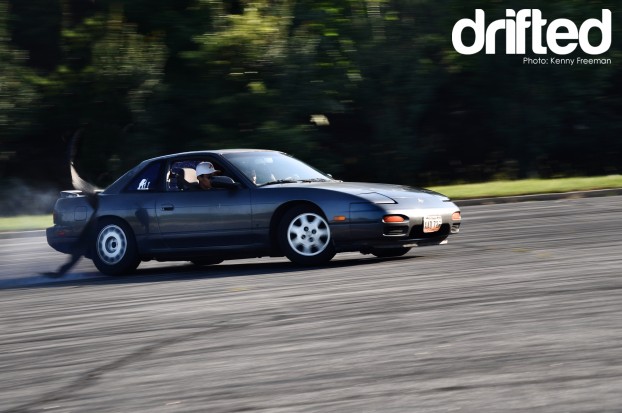 Too bad I didnt get any good enough shots of him sliding. Maybe next time Bryce! 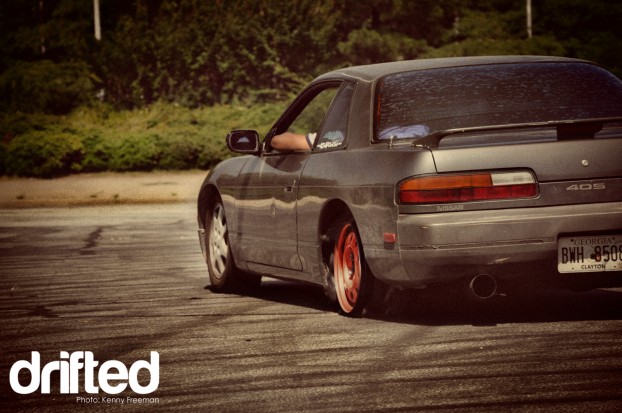 I must add, this was this guys first time drifting. His name is Michael Lindsey, although some call him Dr. Westies. He is driving a 2006 Pontiac GTO 6.0L with SLP Exhaust and Volant cold air intake. He’s only had this thing for a week!!! 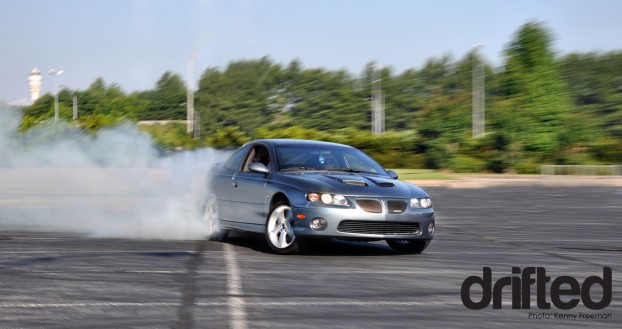 We couldn’t keep this guy from the asphalt, he loved it. With Bryce in the passenger seat directing and guiding his every move, Mike put on a nice couple passes.

Lastly we have Juan Colmenero, or as we all know him by, “J”.  His modded 1995 240SX (s14)  has some nice goodies under the hood. J is one of the drivers that doesn’t care for looks (well, until a sponsor comes along). He puts most of his time and effort into his motor and chassis. With guys from 240Atlanta.com hassling him about the looks of his car, J just keeps on doing what he loves to do. The smoke, close calls, and pure feeling are the reasons J keeps coming out.

He bought his 240 about 2 years ago, but didn’t start drifting right away. He said no to “all that drifting crap”, and stuck with what he loved, drag racing. Running a 12.3 time in the quarter with a terrible 60 ft time, J decided about 6 months after he bought the car to start drifting. He’s been hooked ever since. Since then, J said that he’s drifted solidly every Sunday. Goes to show that hard work pays off. 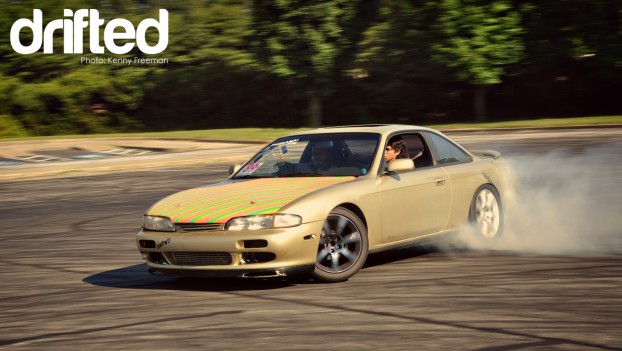 J’s day ended quickly, unfortunately blowing his turbo. J hopes to have his car ready for the next South East Drift practice run in July, with a new upgraded turbo. Until then, he will be tuning and testing. Good luck J. 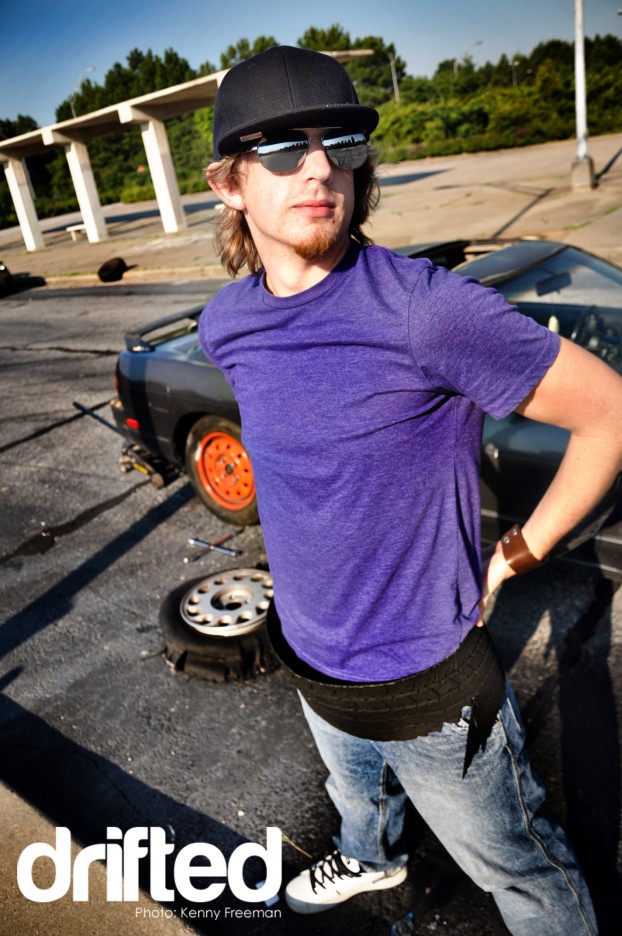