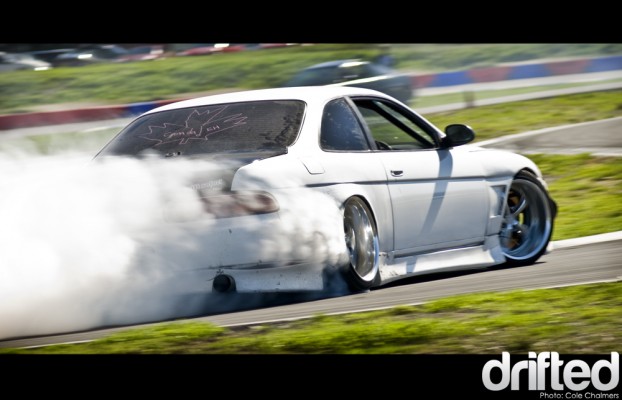 Cole – I awoke early Saturday morning to bright sunlight glaring in my eyes, a far cry from the previous day’s chilly weather and overcast sky. Still groggy after a late night getting rowdy with the drifters camping at Pacific Grand Prix Motorsports Park, I decided I wanted to get a little more sleep in the front seat of my car. With the sun getting higher, the car got warmer.

My bigfoot costume  (don’t ask) was getting uncomfortable, so I ditched it and dropped the windows a bit and got comfortable again. Only to be disturbed by the revving of go-kart engines and, soon after, the roar of high powered race cars ripping up the track over the bank. PGP was open for business, which meant it was time to get up and catch up on the action! 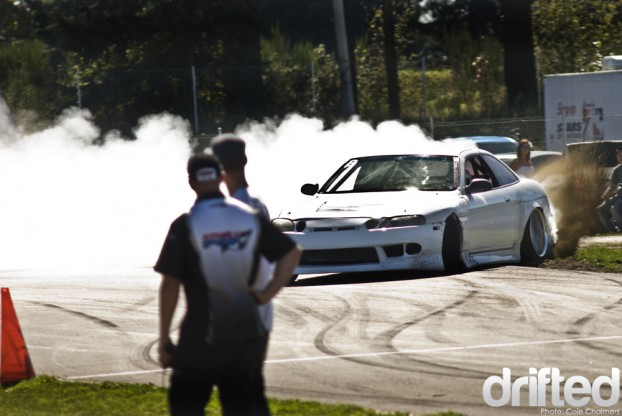 After grabbing some food and a short visit to the road racing track with the Serial Nine crew, I pulled out my camera to give it a quick once over as I faintly remembered dropping it the night before. It all looked good, but the battery was very low from leaving it on all night.

I asked one of the track workers if I could plug in my charger somewhere and he was quick to help me find a socket. On that note, I have to give HUGE props to the crew at Pacific Grand Prix. Everyone there has been nothing but friendly and helpful to me and they accommodate the drivers, media, and spectators to the fullest degree. They work hard to keep their facility world class and I fully appreciate their dedication to their track. 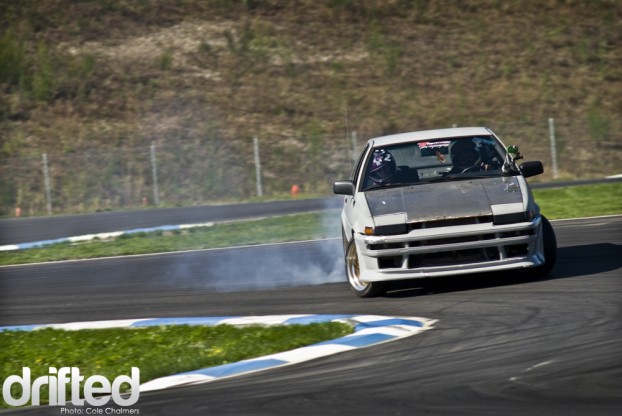 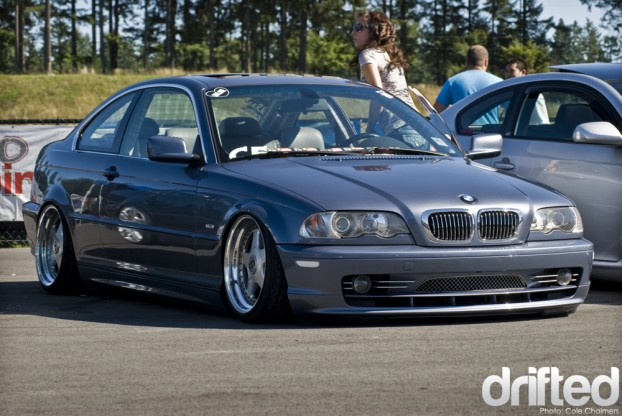 On top of the drifting going on, spectators were also treated to a steady flow of beats curtosy of a live DJ and a car show with some fully sick rides. One of my favourites was Paul Bruney’s BMW. So simple,  fresh and so clean! One car that caught me off guard was Austin Johnson’s Mazda 626, when I first walked by I thought it was an s14…until I saw 4 doors and had to do a double-take. It’s not the first car you would think of to run some tight fitment, in fact its probably one of the last, but Austin pulled it off and I fully approve! 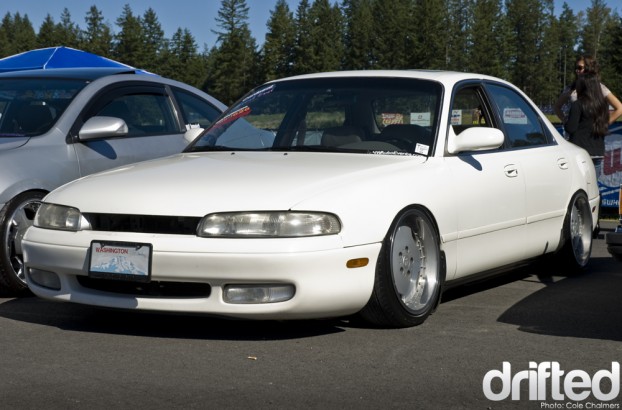 There were a lot of cars on track that could have very easily joined the show, as well. Steve Thompson’s Toyota Soarer (Opening Pic) has some fitment that folks should take note on, and Rocky Chavana and Nate Kandoll’s 240s were both so clean you could eat off them! 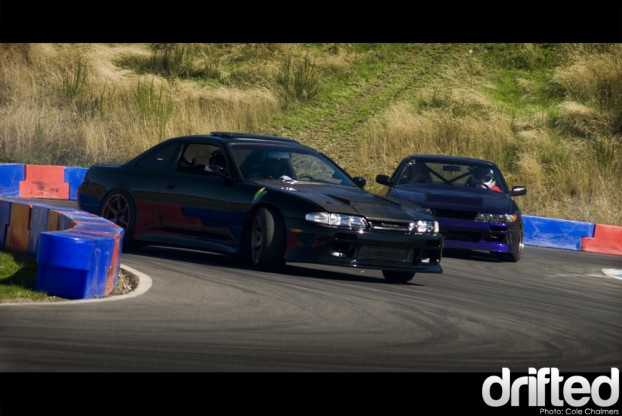 The late night, coupled with a hot day definitely hit a few of us. I caught Chris Scremin taking a nap in Gerard de Peralta’s X8 Cressida, good thing the SerialNine Crew likes to run full interior! I also spotted MotorMavens’ Justin Shreeve trying to find some shade under his fellow contributer Yoshi Shindo. That’s what friends are for, am I right?

David – By the end of the day at this track, I was beat. the shear lack of sleep and the heat had finally caught up and I spent the last half of the event off the track chasing shade. Aside from all that PGP is one of the more fun tracks to shoot at, where media is allowed access pretty much anywhere. 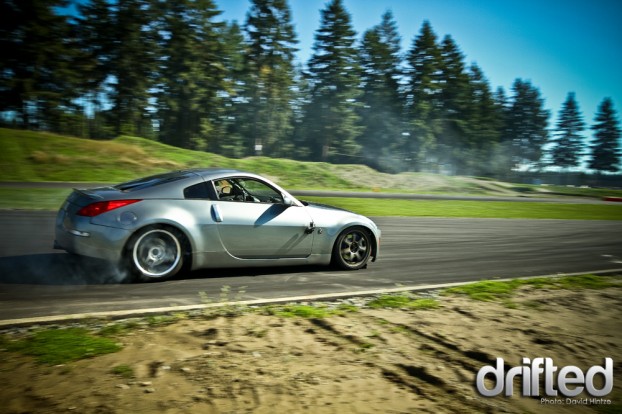 No barriers here, just plastic bumpers and grass. but with this track being a lot more technical than most, slower speeds are a must. Plenty of time to hear and see stray cars, like say, a silver 350Z that looks way far away due to your wide angle lens at 10mm and closeness to the track seemly far away. I think  my kneecaps were saved by my memory card filling up and me looking up to grab a new card. Oh look, a car coming at me, better scoot back quuuuiiiick! Here’s some of the best shots I took from the endless track of turns. 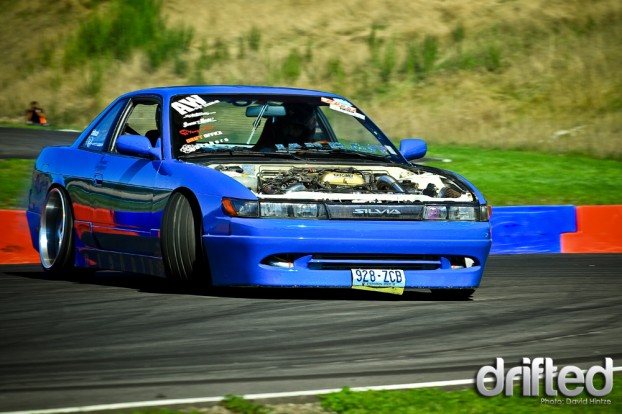 Extra airflow is always a good thing, as the heat was intense on the day. 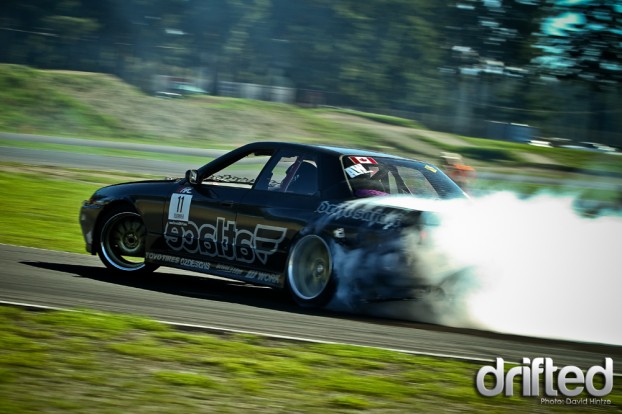 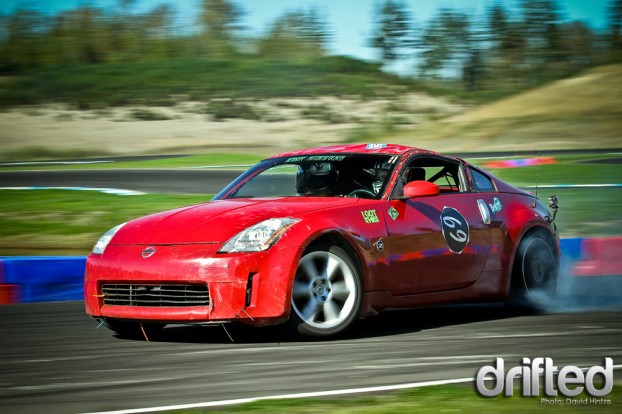 The beast that wont die, the other more rugged 350Z we see on the track. You may remember from an earlier event this year this red 350Z was placed on it’s roof. It was rolled back over, beat back out a bit and continues to be used hard. 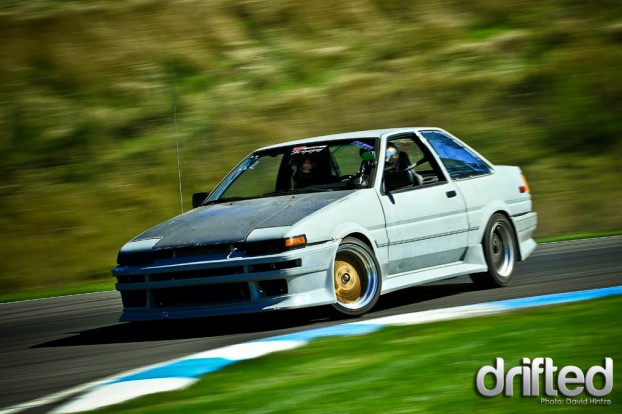 Its good to see the old favourite, the AE86 Corolla still being used in drifting.  Abiva’s coupe looks like it was used as it was meant to be. 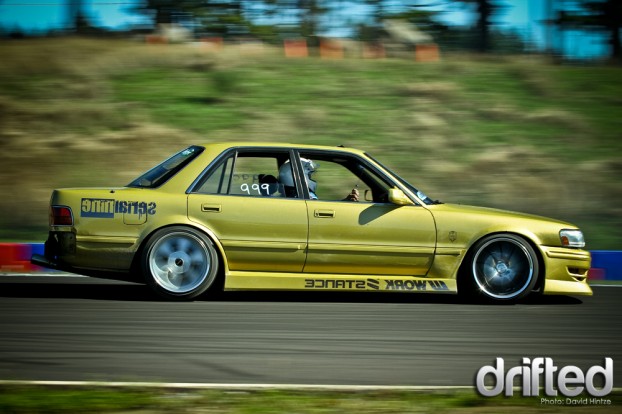 That wraps up the Bigfoot Bash 2010, a beast of an event for all involved. I look forward to visiting Pacific Grand Prix Motorsports Park again in the near future.

PS! To peep Cole’s photos from day one visit his Flickr! and check out David’s photos of the event on his website.