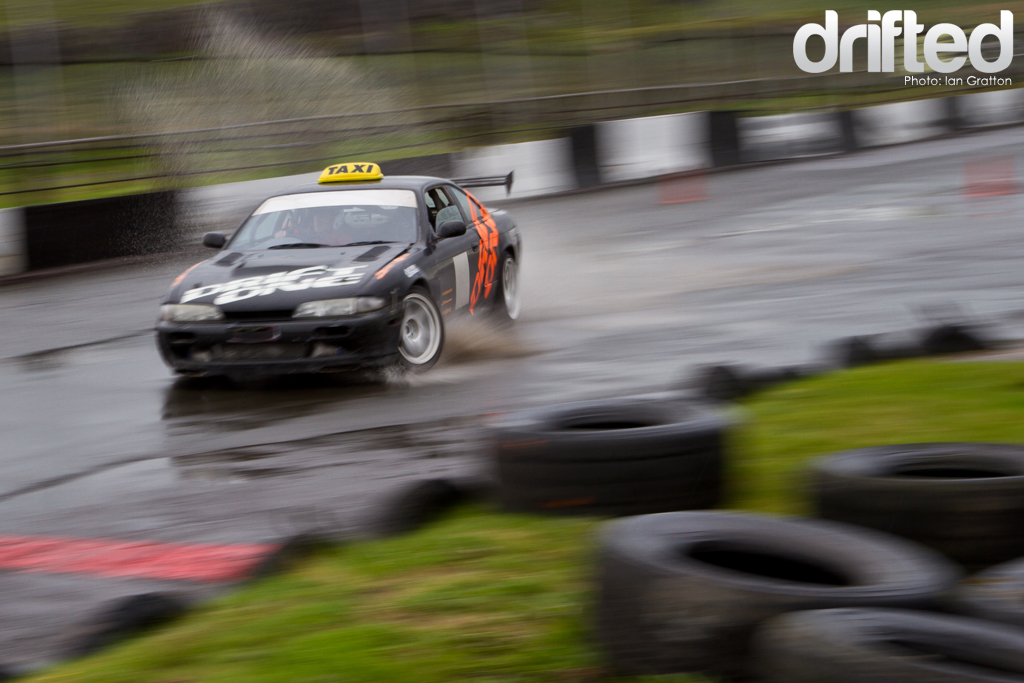 As the summer draws to a close in the UK we head back into the Derbyshire Peaks for the Penultimate Drift ONE event at Buxton Raceway in 2010.

With the UK summer at an end the climate becomes unpredictable and the likelihood of bright sunny skies is over.  Sunday morning in Derby was a pleasant start but as soon as me and the big easy M3 got into the peaks the drizzle and fog started.  Once at at the raceway the rain came.  I always talk about how miserable the weather is but we never generally experience prolonged constant rain like we did on Sunday.  As you can imagine from a photographers point of view it’s not going to be pleasant and I was certain of a good soaking.

Again – lots more cars and activity in the pits shows that the Drift ONE days up at Buxton are starting to get a good regular following.  This is both great news for the venue itself and more so for the drivers as they have a steady stream of events to attend costing them only £10.  It really is a no brainer considering lots of track days at real circuits are generally about £200 a time and you would never be able to drift without getting black flagged and sent home.  With Drivers like Mike ‘Never-Lift’ Gaynor on hand for tuition and advise its a perfect package to get your started out in the sport.

With only marshals and another photographer for company (Mark White – trying out his newly purchased Canon 70-200L f4 lens) I threw on my drifted.com high vis and headed into the middle of the arena and waited for the action to start.  Starting at the far side of the track I could clearly see lots of standing water.  The surface at Buxton is aviation spec tarmac and is extremely grippy but once covered in water it quickly turns into an ice rink.  Watching the drivers adjust to the new grip levels was interesting and really slowed people down in the corners as you can imagine. 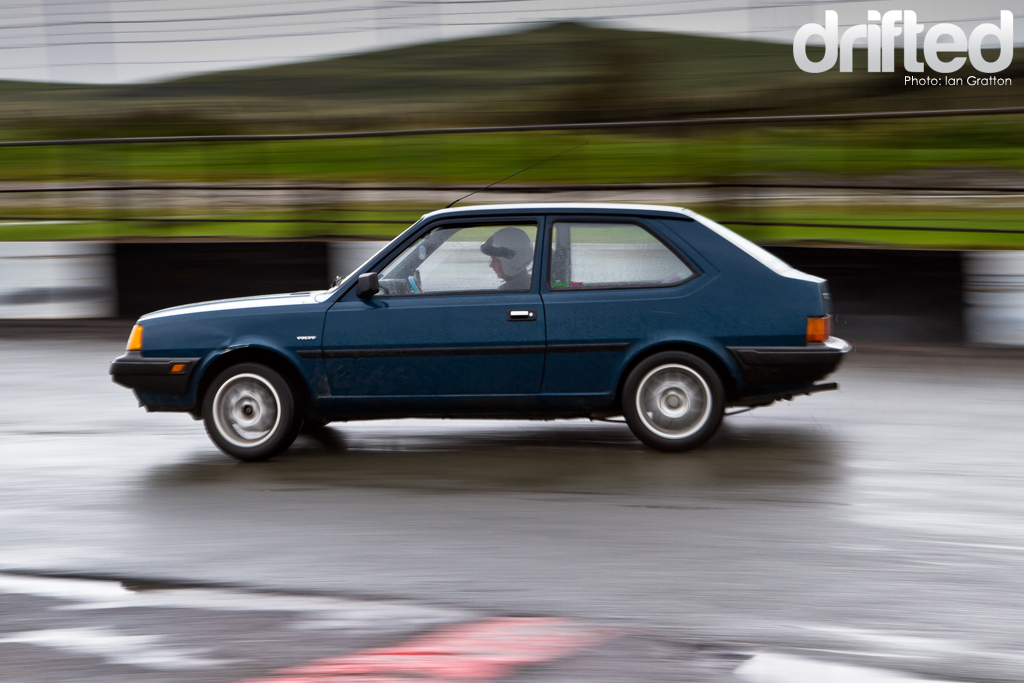 The driver of this standard Volvo 340L (likely to have a standard 1.4 or 1.7L engine under the bonnet) was probably quite glad of the rain due to the real lack of power.  Even maximum commitment and speed in a car such as this in the dry often leads to the car bogging down and not having enough grunt to pull through the corner.  This chap had no such problems today and the wheels kept on spinning – even leading to some slow, wet manji moves down the straights! 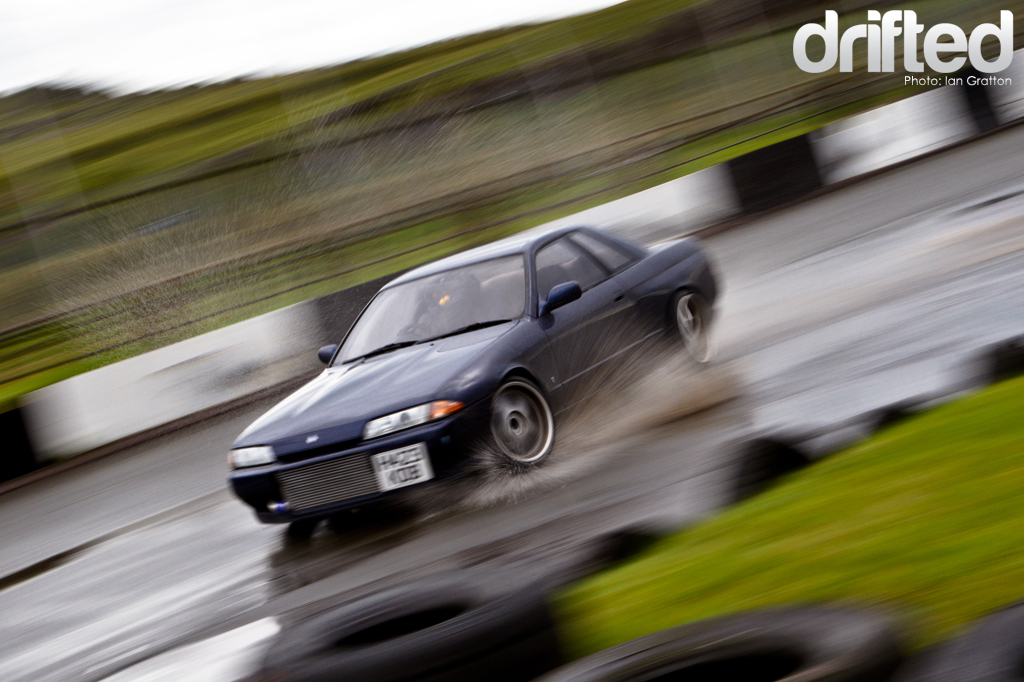 This Blue R32 Skyline belonging to Ross (cindral on Driftworks) was on its second visit to Buxton.  Since its last visit the car has had a few subtle modifications including a more useful front-mounted intercooler to aid with charge temps.  Ross is making some great progress and his driving is coming on a treat. 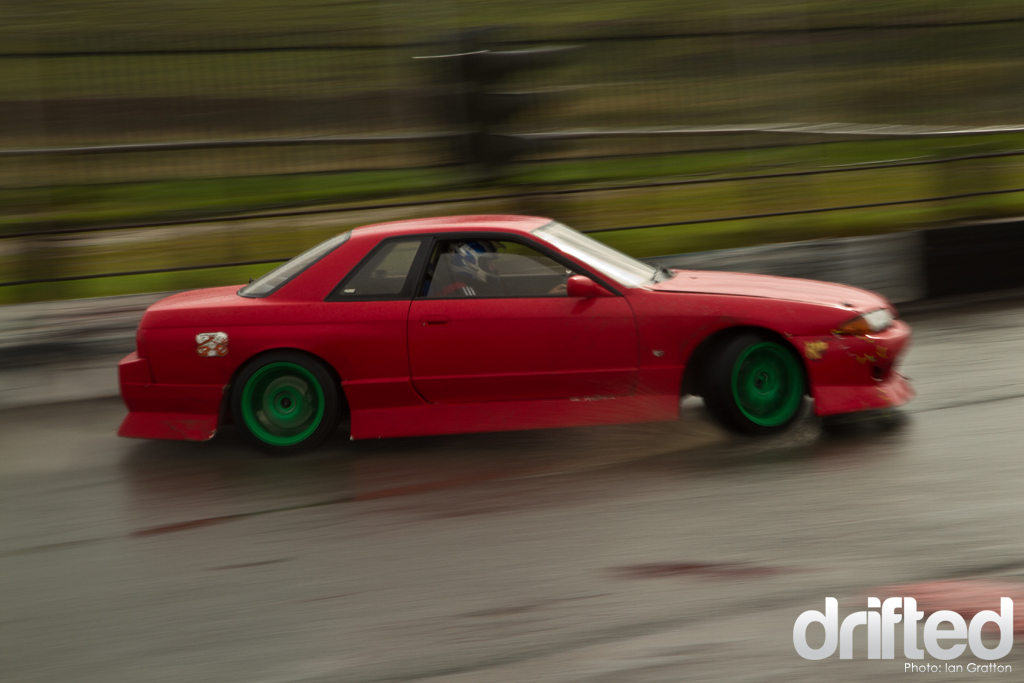 Adam S is another return visitor to Buxton in his red R32 Skyline.  The aero on this car gets a little bit more battered each time I see it and is now held together with a substantial number of zip ties.  Towards the end of the day the front and rear of the car were very naked from more aero smashery and a lucky tap on the wall.  I think Adam has decided to go back to using standard skyline bumpers as they are somewhat more resilient. 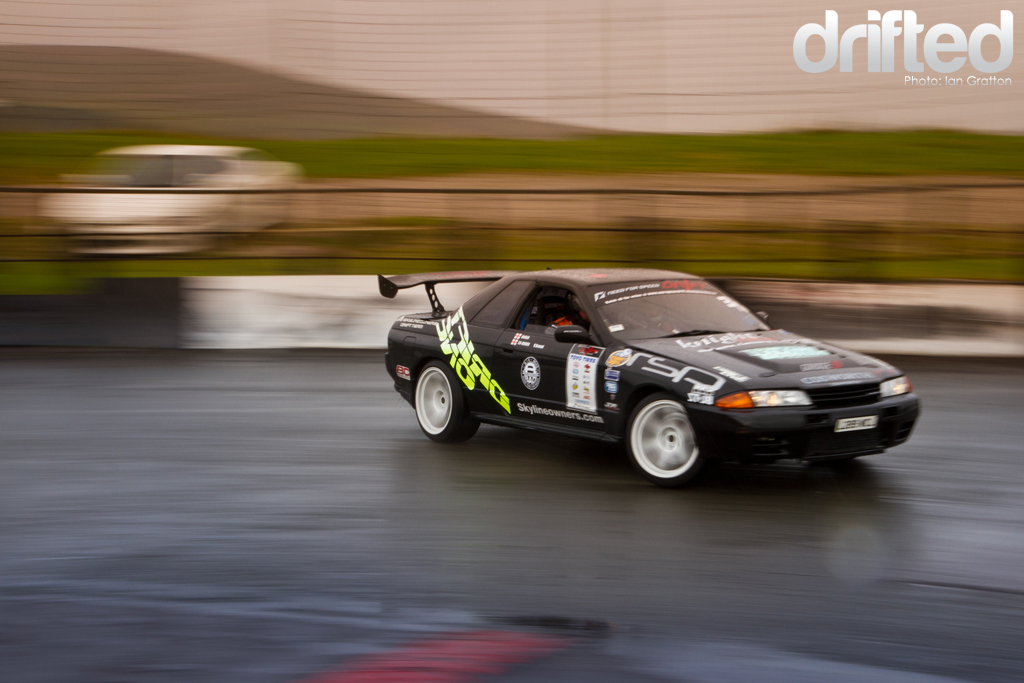 Karl Farrar, usually present in either a Nissan C33 Laurel or Toyota Cresta, was this time shaking down his newly purchased ex-Drift ONE R32 Skyline GT-R in preparation for the BDC Event up at Knockhill on Saturday the 25th.  I have a real soft spot for R32’s having owned one myself (I’d have another) and the wider, lighter, still RB26-powered rwd converted car seems to be the perfect package.  The days dampness and rain put an end to the large smoke trails that Karl usually leaves round Buxton but the car seemed to be going well so best of luck for Knockhill. 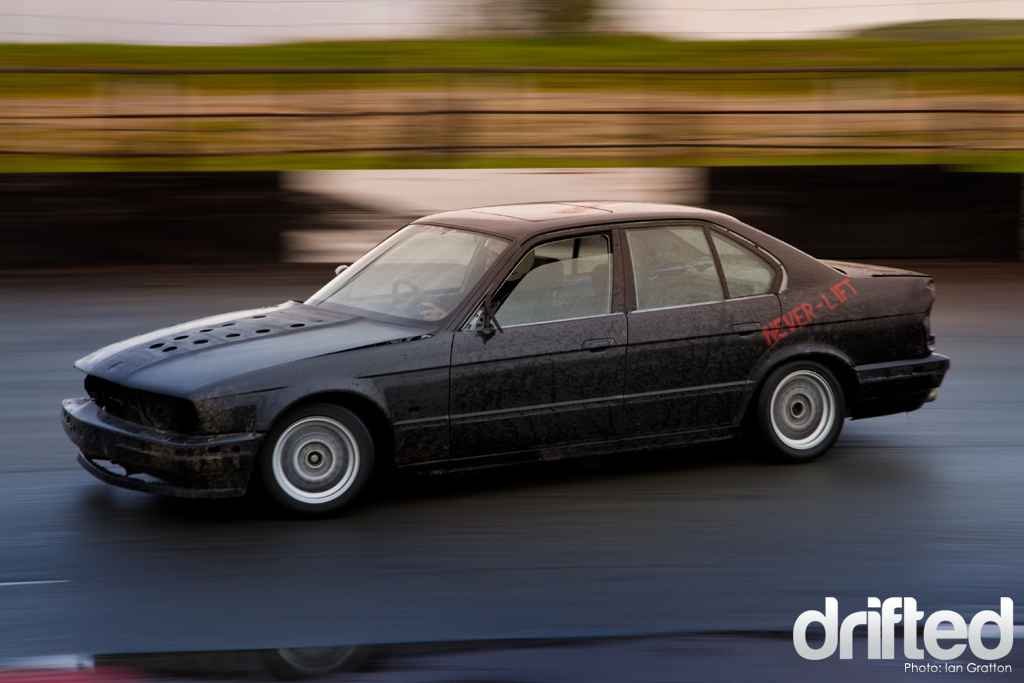 There was the usual array of BMW’s in attendance including this lightless evil looking E34 5-series sporting a few scars and a never-lift stencil on the rear quarter. 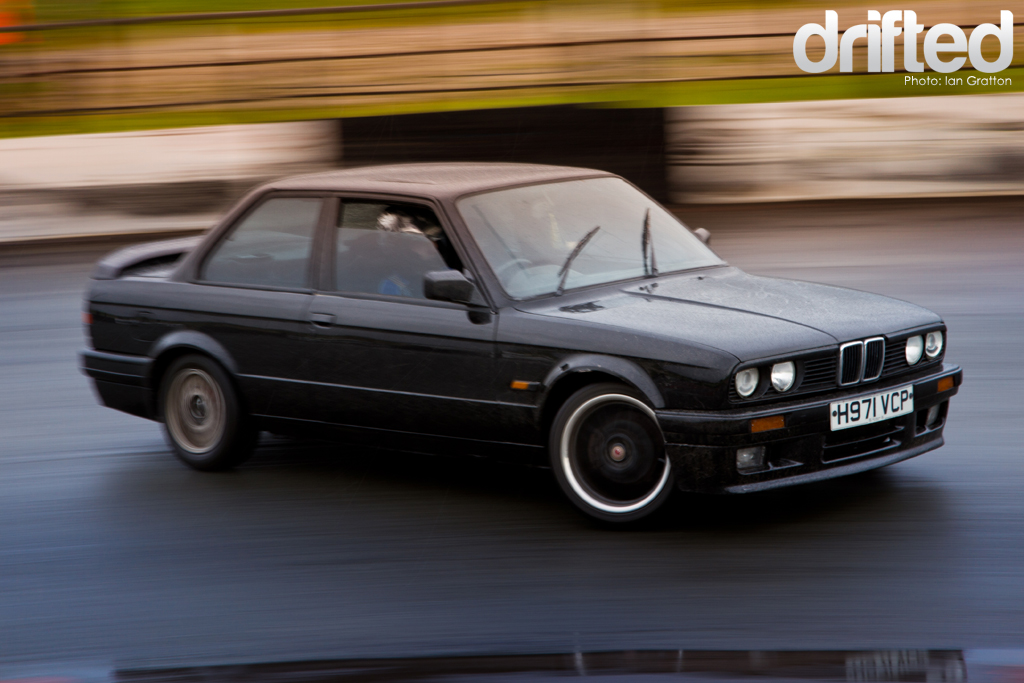 This tidy looking e30 coupe was running with an open diff – the rain was making things a little easier but I’m sure the diff will have been welded up on its next visit to the ring of steel. 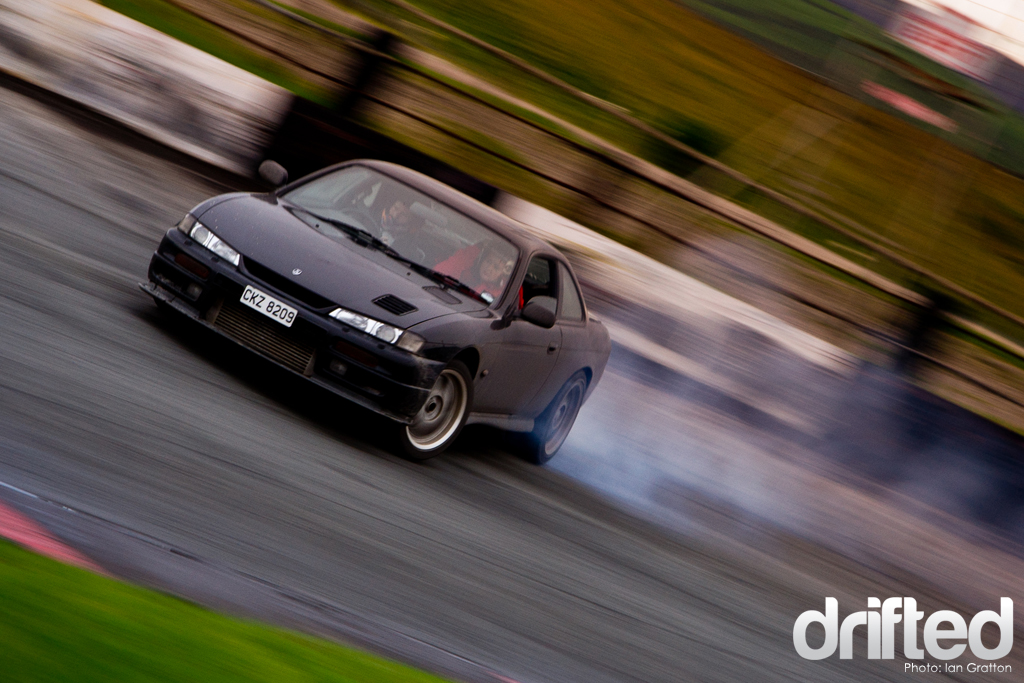 After lunch the track started to dry out a little which allowed the drivers to get up a bit more speed and start to make some smoke.  The usual afternoon fun competition took place and this time the John and Terry took the win giving them a place in the OCD event which will take place at Mallory park later this month.  Another black s14a was also in attendance for the first time today.  Cowpat Matt known for his low power MX-5 skills has made a swap over to Nissan powers.  Matt was getting on well with the car but it was suffering from a boost leak somewhere.  This is typical of the standard wing-mounted intercoolers on s14 model cars and this will be addressed with a better front mount as soon as the pipework becomes available. 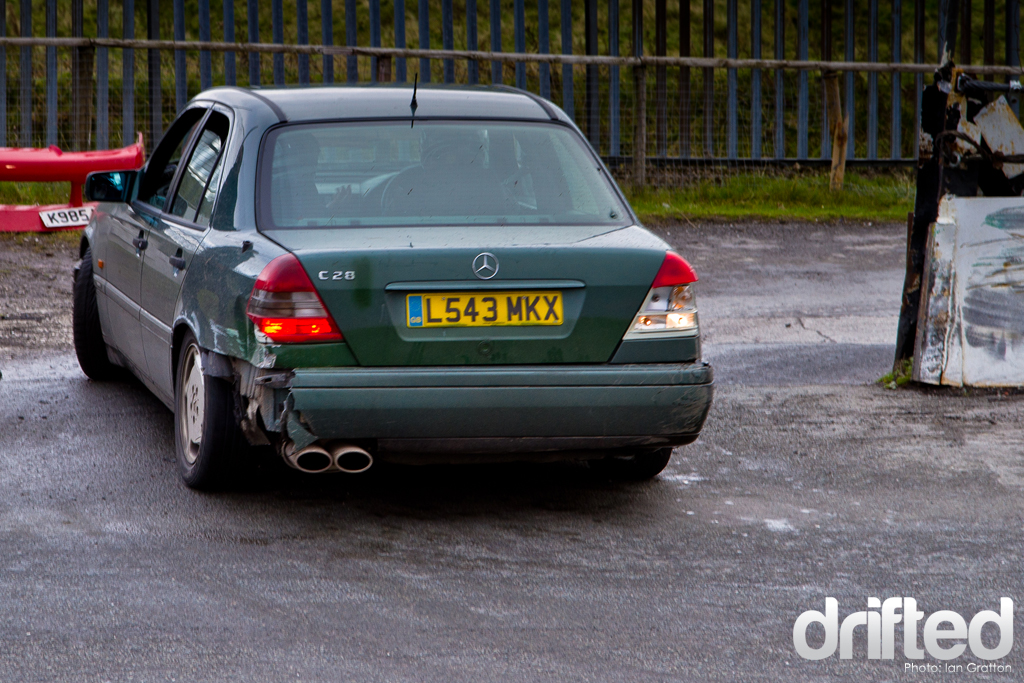 As the afternoon progressed drivers were going at it hard and a few mishaps occurred.  This tough old Merc C28 had a pretty good clatter along the wall.  All things considered there wasn’t as much damage as the noise the impact made would have you think.  Just goes to show how tough these German cars really are. 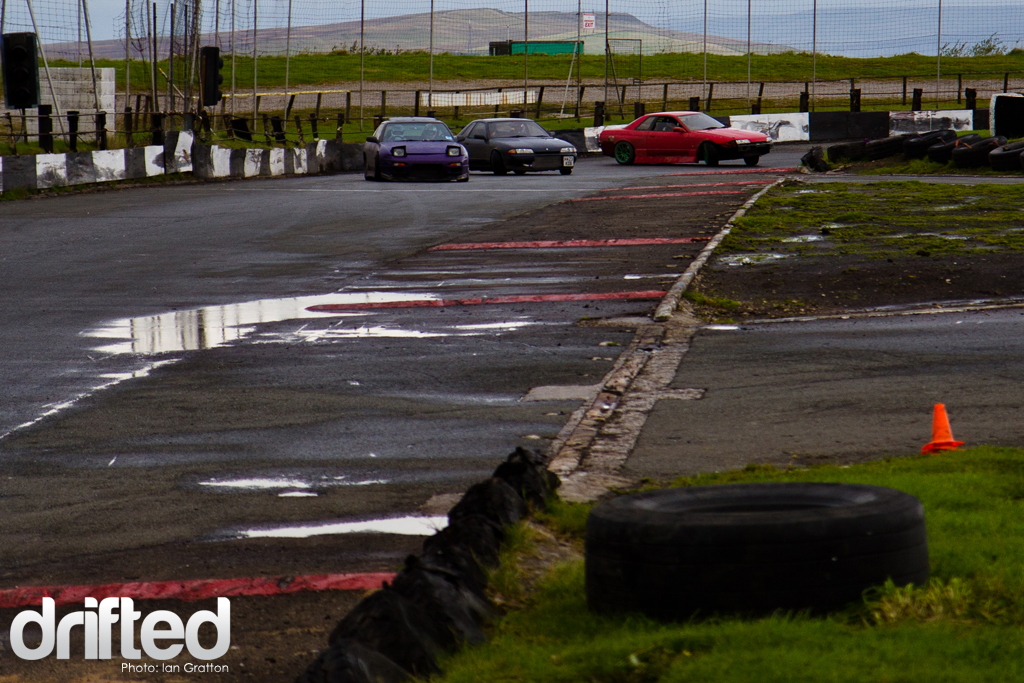 As the light faded and the day drew to a close something happened at Buxton which I’ve never witnessed before.  Six of the drivers decided they all wanted to go out together for some runs.  Seeing six cars going at it was a real treat – whilst more like two groups of 3 rather than a 6 it’s something I hope happens again next time.

By this point I was pretty cold after the soaking we’d got in the morning and I was certainly ready for a comfy journey home in the M3 along some of the great roads in the Derbyshire Peaks.  The drivers packed and loaded up their cars and we said goodbye to Buxton for another month.  We’ll be back along to the Raceway on the 24th of October for the last event of the year. Thanks again to Drift ONE’s John and Terry and Buxton Raceway for putting on another great day. 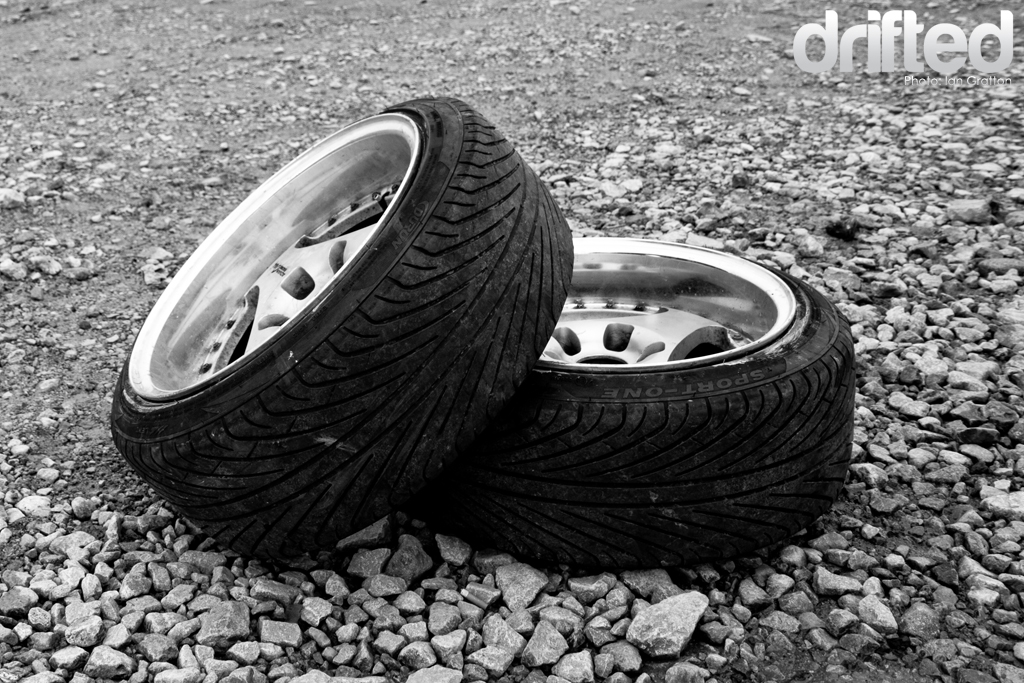 For the first time this year Drift ONE will also be offering prize money in the competition part of the day.  So get yourself along and if you drive well enough to win the competition you could come away with £200 in your pocket.  There is a big covered grandstand at the arena which would be nice to see packed out with spectators – why not come and view some grass roots motor sport!  Maybe we’ll see you there?

Check this flickr photoset for more pictures from the day soon.