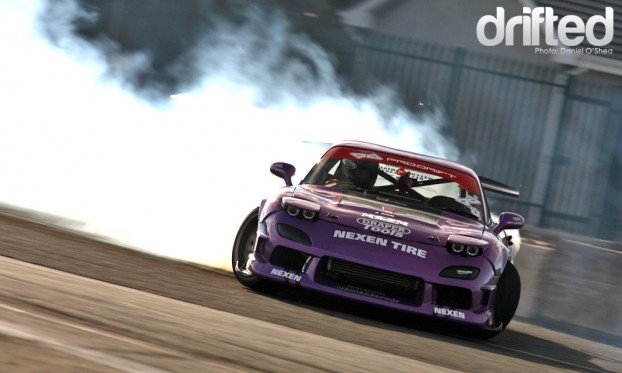 Sunday saw the final round of the 2010 Prodrift Championship take place for the Pro seeded class at Fermoy. This was also the venue for the season opener back in April. To give a view of the track we go on board with James Deane, the winner of the Opening round.

The venue is actually a Cattle Mart, but a few weekends a year it plays host to motorsport events and car shows. And for Prodrift fans provides an action packed track for the drivers to show off their skills. 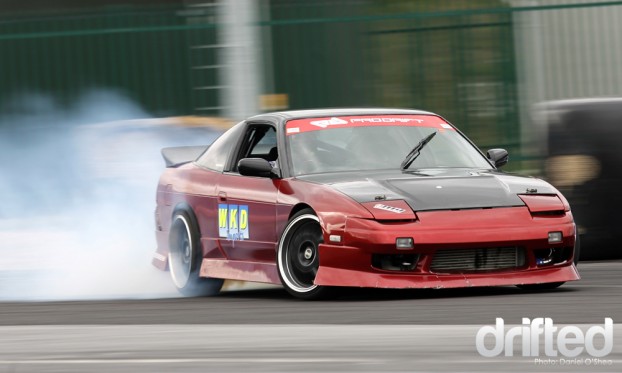 The days action begin with Top 16 qualifying, Dan Moorhead in his wine 180SX took first place in qualifying after an amazing run, Dan ran the wall at every chance, and even returned to the pit with the back bumper loose from rubbing the wall. Qualifying also brought some disappointment for Mike Deane, last year’s Champion. Mike qualified for the Top 16 battles in his first run, but on his second run, the turbo blow and ended his chances of making the Top 3 in this year’s championship. 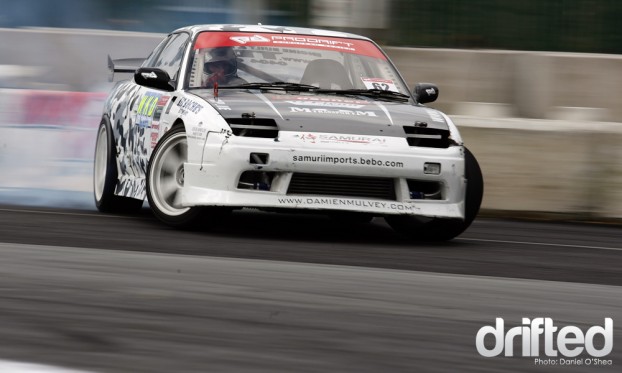 After qualifying, Superlap took place. This is a single run of the course for the 16 drivers that have qualified for the twin battles. The run is judged and better performance equals championship points and also determines the order of the top 16 battles. This lap allows drivers to push for the perfect lap without the fear of not qualifying. Damien Mulvey in his onevia took the superlap win and also a instant pass to the top 8, as Mike Deane had retired. 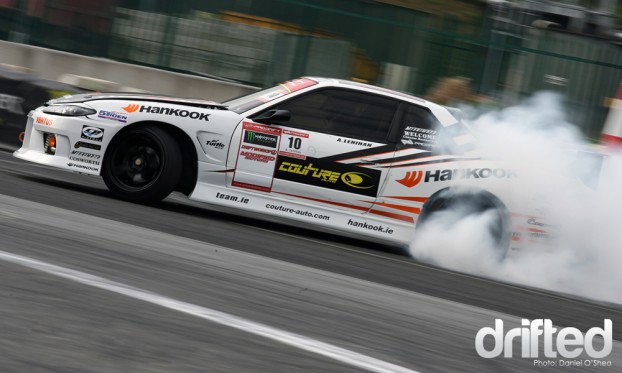 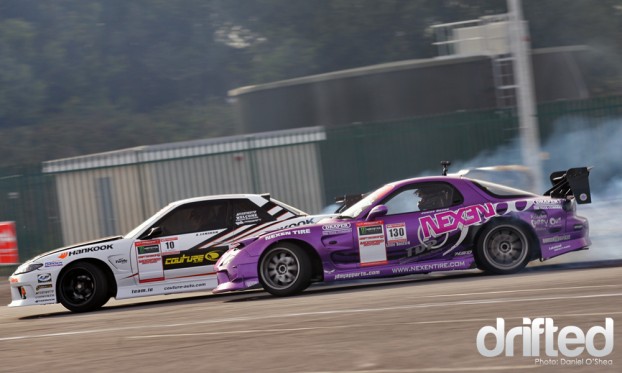 Hankook Driver Alan Lenihan faced Nexen’s James Deane in the Top 16. Alan however could not match the aggressive driving style of James who progressed to the Great 8.

After finished 2nd in the Final round of the Pro unseeded championship the day before, Paul McCarthy and his opponent in the Top 16 Brendan Stone had both climbed the ranks from unseeded pro to take there place in the Pro seeded Top 16. A spin from Paul gives the battle to Brendan.

Another top 4 finisher from Saturday Larry Love in his S14A was paired against Chris Brady in his RB25 powered S14. Two aggressive drivers, two action packed runs, but only one winner, and that was Chris Brady.

Christy in the 1JZ S15 was against number 1 qualifier Dan Moorhead. Christy aggressive driving style plus the large power of the car allowed him to close in on Dan and power his way into the Great 8. 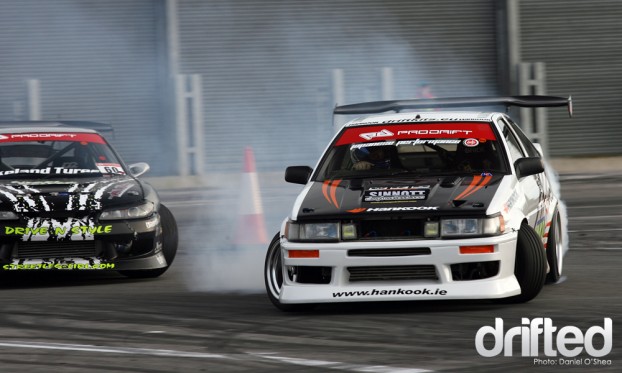 Alan Sinnott in the Hankook SR20 Powered AE86 and Nigel colfer in his 1JZ 180SX rounded off the top 16. Despite a great performance by Alan, Nigel moved on to the top 8, to meet Christy Carpenter. Christy battling style become more aggressive and inching closer and closer to the leading Nigel, gave him the advantage and his place in the semi final.

Next up was Brendan stone and Damien Mulvey. A large straighten by Mulvey on the first run, gave Brendan the advantage going into the second run. There was little Mulvey could do to win the battle, but from the moment they left the line, Mulvey followed Brendan’s every moved, and overtook exiting the first sweeping bend. However the judges gave advantage overall to Brendan and in his first round of the year had made it to both the Unseeded and seeded Pro semi finals. 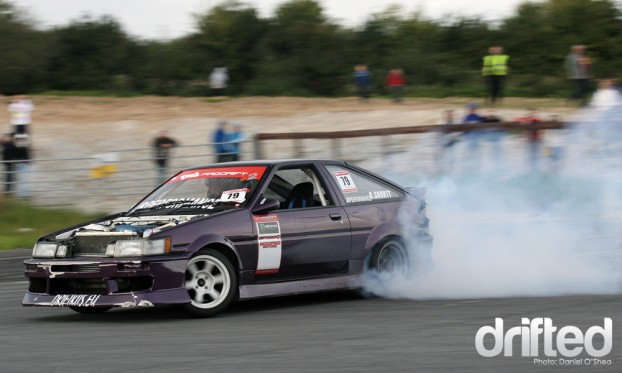 Also making it through to semi finals were James Deane after his battle with Shane O’Sullvian and also Damien Shortt who was against Chris Brady in the great 8.

The first Semi Final was an all Nexen Battle between James Deane and Christy Carpenter. Christy following on from his earlier battle applied push when following James, but James when following mirrored Christy exactly in what was the best battle of the day. There was nothing separating the Drivers, and the Judges and the crowd wanted to see them “one more time!”. In the rerun, Christy as he did all day started to edge closer and closer to the leading car, but got a little too close and hit the back of James’ car and as a result hand the place in the final to James. In the second semi final, Damien Shortt progressed after a tire came off a wheel on Brendan Stones car during a run, giving Damien the advantage.

In the third and fourth battle, as can be seen from the photo above, Christy dominated the battle and took third place. 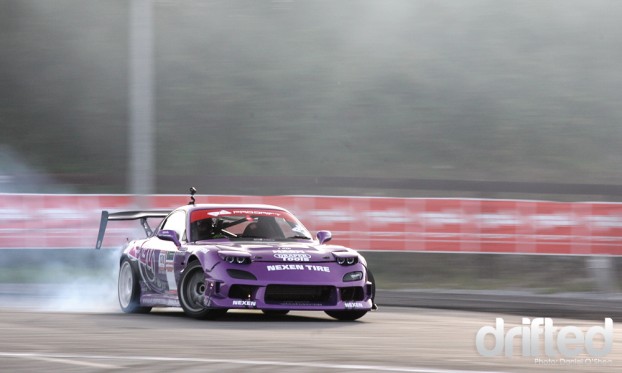 In the final, James who has many many times being in a Prodrift final was against Damien Shortt who for the fist time had make it through the Pro top 16 to the final. After a close battle, the win was given to James Deane, who along with the final round win had also taken the Championship win for the second time.