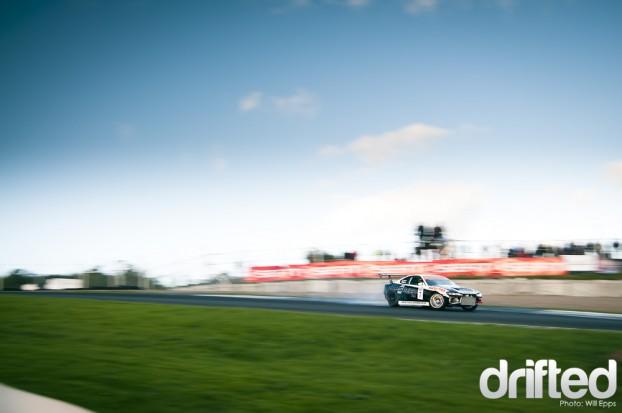 Last weekend was the final of the British Drift Championship up at Knockhill in Scotland. I’ve been so lucky this season, not one single event I attended had been spoiled by poor weather!

There was a good turn out with a nice wide variety of cars, not just the usual rows of Nissan/Toyota! 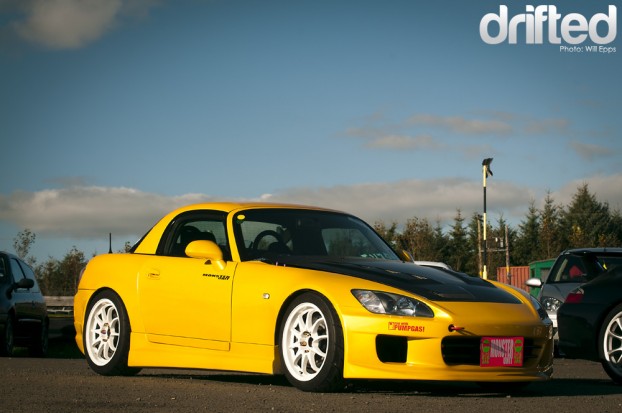 This Honda S2000 was a personal highlight, out with a few other chums from Monster Unit. I never used to be a fan of the S2000 but this one was nice and clean, maybe a few less stickers though… I don’t like stickers… 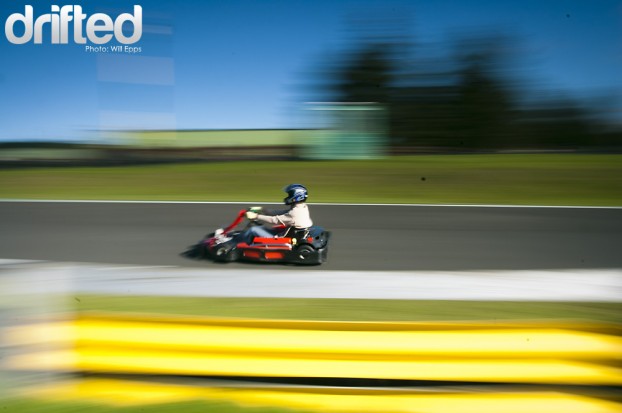 Knockhill has a mini track for some Go Kart action, many a person were attempting a skid or two round the corners! 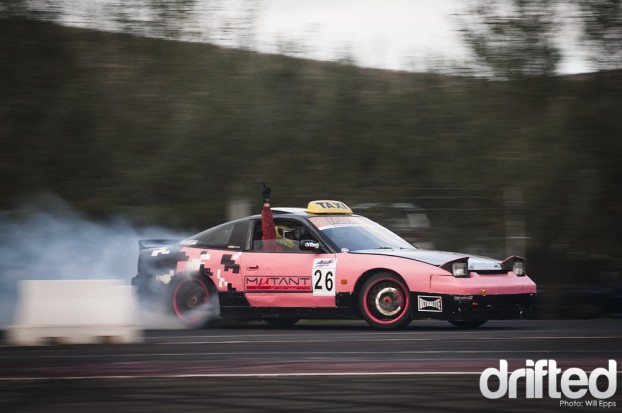 The semi-pro’s qualified on the tarmac behind the drivers briefing room, Saturday was a great day with a great feel for the progression as the drivers start to know the course and feel a little safer entering the corners at bigger angles and higher speeds. Taxi rides were held on the Sunday around the same course, with long queues of people jumping in the cars, being taken for a few laps then jumping out either green, white, or screaming “That was quality!” 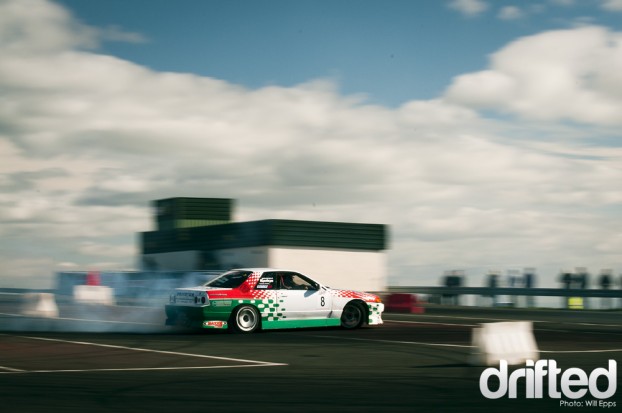 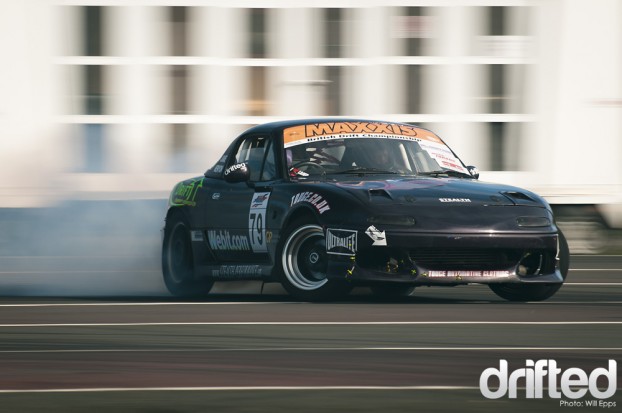 Jamie Kenyon was working his magic all day and managed to qualify in a well deserved 1st position. The first thing I noticed about this MX was the “wrong” noise it was making. On further inspection it turns out there’s 300bhp worth of SR20DET motor crammed into the bay, brilliant motor! 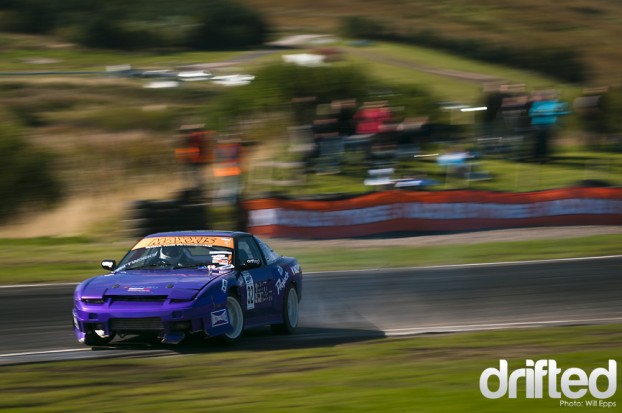 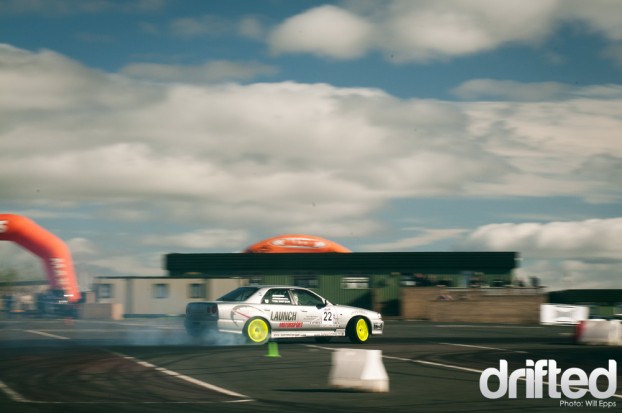 Tom Simpson was on form all weekend, his Launch Motorsport Skyline sounds like pure evil! 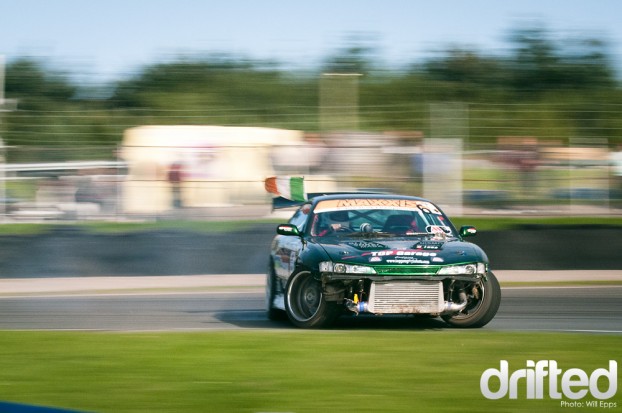 Danni Murphy on the lock stops on the way into Duffus corner, the entry is around 100mph, completely blind, and over crest. A recipe for disaster in some ways but drivers managed to get plenty of nice clean runs after a few practices, but not always. 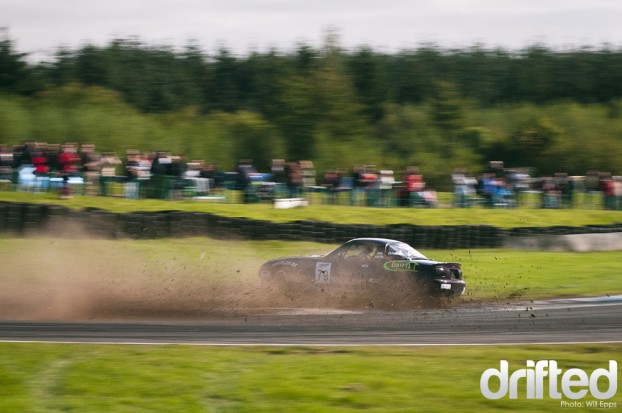 Quite a lot of people ended up in the grass or sand traps, much to the entertainment of the crowd, but not to the delight of the pit crews and drivers. I thought Jamie was rolling when he came off sideways at nearly 100mph, I didn’t catch the shot sadly but Ross Ianson of Speedhunters did however manage to snatch it. You’re a lucky boy Jamie!

The Semi-Pro point scorers from Round 5 were as follows –

On to the Pro Class…. 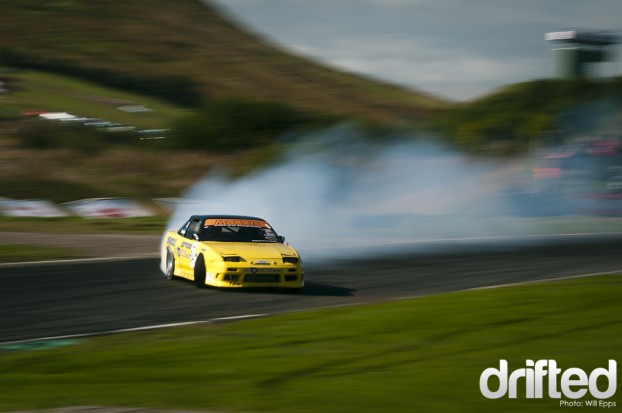 Greg Gush storming along the straight section between turns two and three, this is one of my favourite cars from the entire paddock, I just love Onevias. 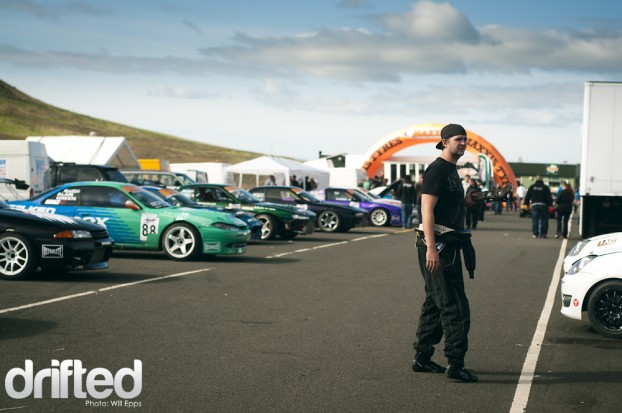 Ant “Google” Cahill was running round the pits looking for various parts which got snapped after an all or nothing entry, which kind of went wrong and took out all his kerb side suspension arms and wheels. Finding parts was proving tricky though as most other S-body competitors in the BDC are running the later S14a shape. The wider track and different geometry means the parts aren’t interchangeable, but after a frantic 5 minutes he managed to stumble upon what he was after. 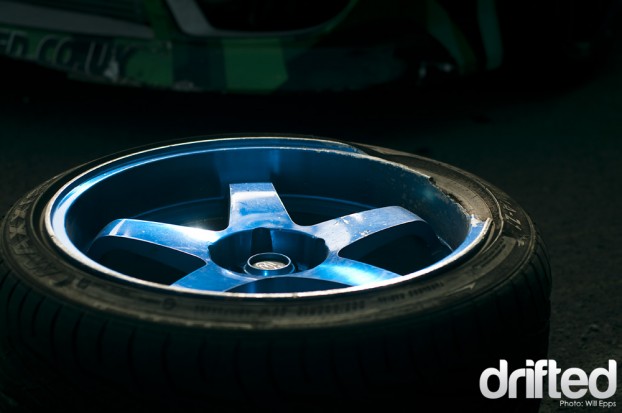 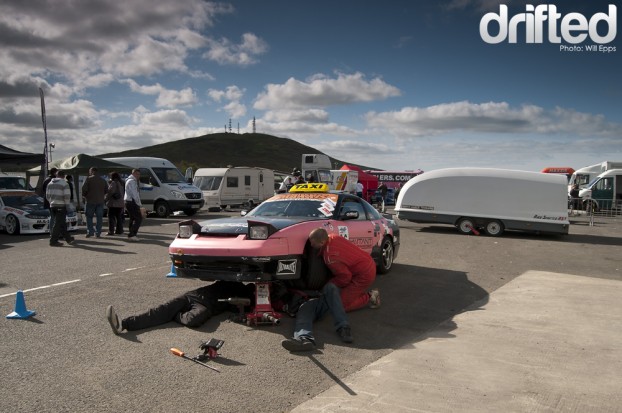 His team stole them from “Smiley” Brad at Mµtant Engineering, impressive how quickly these guys work on there cars. Within a matter of minutes Brad’s car was up in the air, parts were off and fitted to Ant’s car all in the time it took 3 other drivers to qualify, impressive stuff. Ant went out for his runs and came back into the pits, parts were removed once again and Brads was back doing his passenger rides in no time much to the delight of the girls wanting a go in “the pink car!” 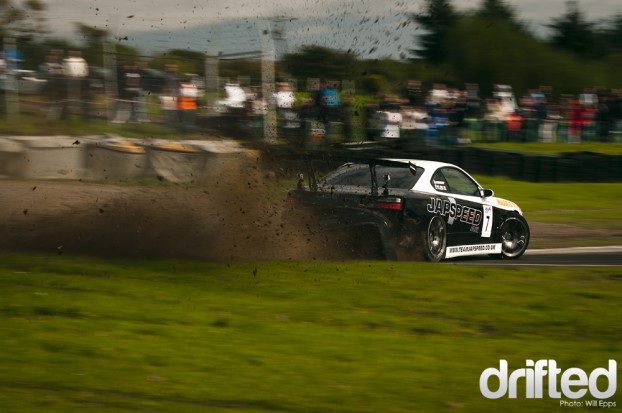 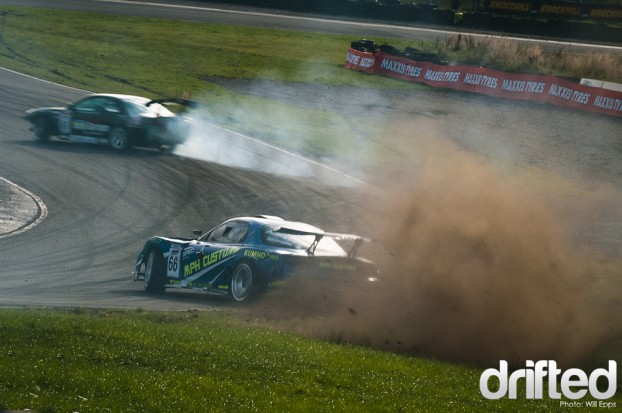 Most drivers had the odd scuffle with the dirt at some point of the day, and each time someone had a brief encounter with the rough stuff zip tied bumpers liked to go for a wander…

Leaving body kits here there and everywhere! The above shot is one runs worth of damage! 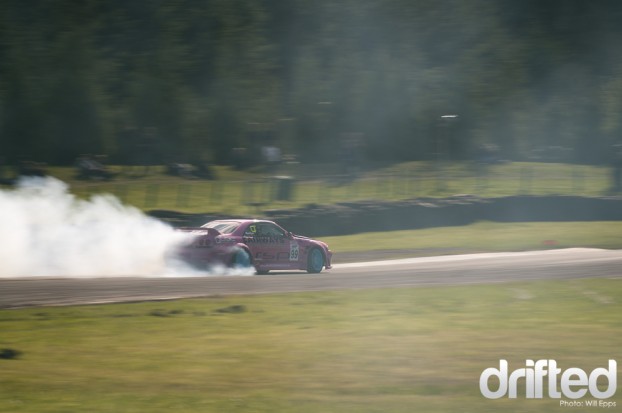 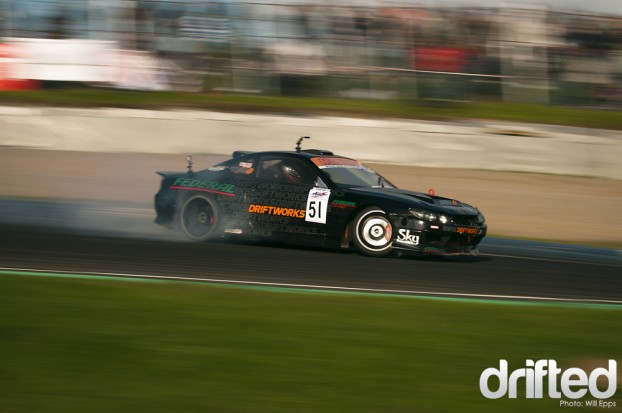 Phil Morrison was close on Perry’s tail with a 94 in qualifying, as the championship stood so close even the extra point or two from qualifying could make all the difference! 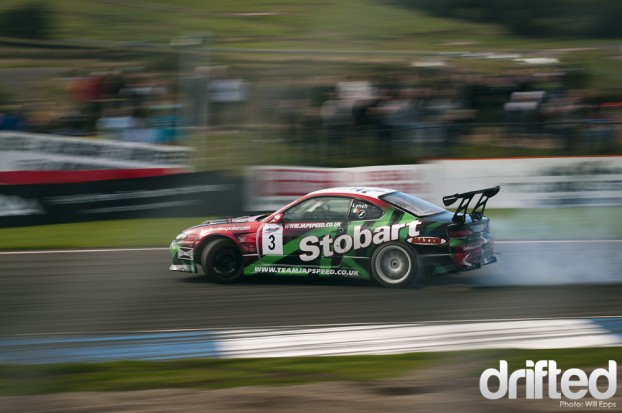 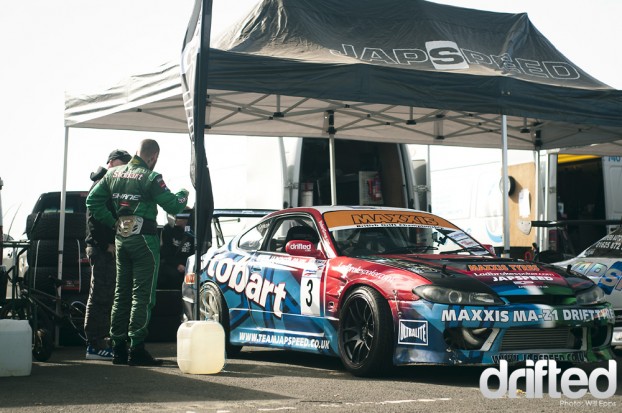 Shane Lynch of Team Japspeed/Stobart was there with his twin turbo v8 powered Silvia, he was being filmed by ITV film crew all day for a new documentary with plenty of drift footage in let’s hope! He was driving flawlessly all day, I doubted Shane’s driving at first in all honesty. I thought he’d be the pop-star that brings in the sponsors, but he was one of the best drivers I’d seen all weekend, I didn’t see him make a single mistake, and as far as I recall he may have been one of the only people to have a clean sheet throughout the day? 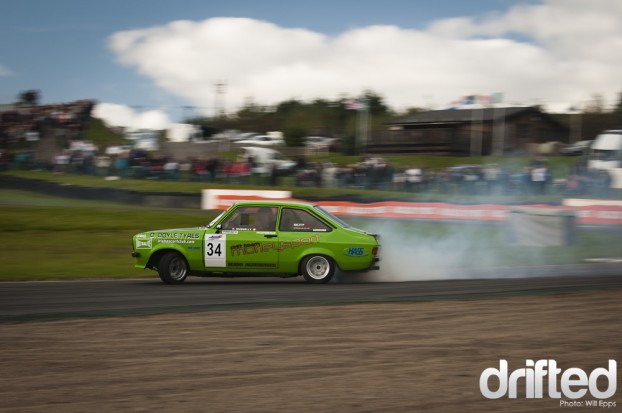 Declan Munnelly was using a different technique to most into the third corner, where most drivers would use a hand full of wand to slow the pace, Declan gave it some “manfoot” coming out of turn two then used his extra momentum to take him to the corner speed scrubbing, completely off the power and handbrake! It was a brilliant technique and I don’t think many noticed, this deserves credit! 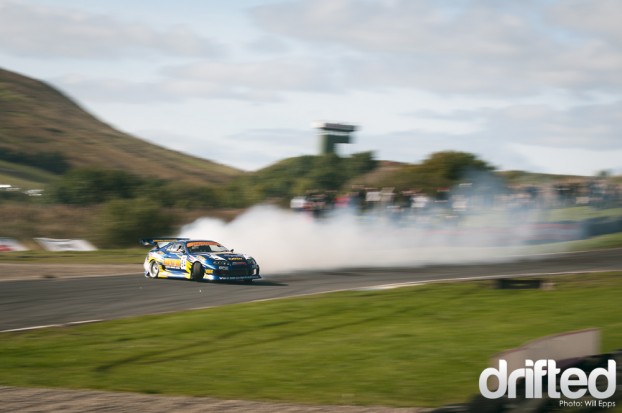 Luney had some technical problems after qualifying 5th he managed to blow the oil pump and in turn put a hole the size of a fist in his sump, it was a real shame as he only took a hand full of runs, the second of which resulting in the above photo. A quick learner mixed with raw driving talent! 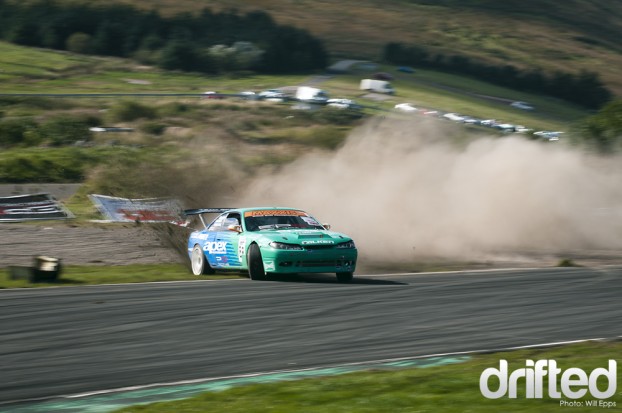 There wasn’t much left of the bumper in the body kit graveyard once Team Green’s Matt Carter had a swipe at it! 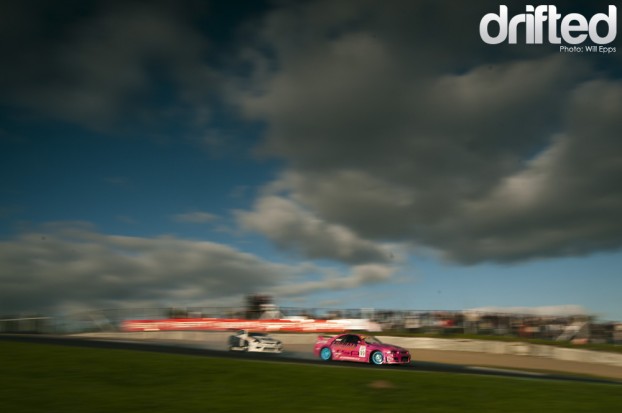 Which he won, placing Perry 3rd on the podium! 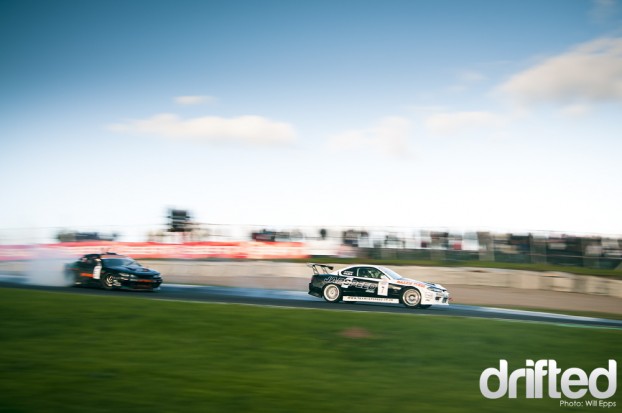 Danny Eyles and Phil Morrison battled it out for the first and second places on the podium. But not only that as Phil had the entire series on his shoulders, in order to win the championship he had to beat Danny, watching Danny go all out whilst Phil needed the points was great to watch! 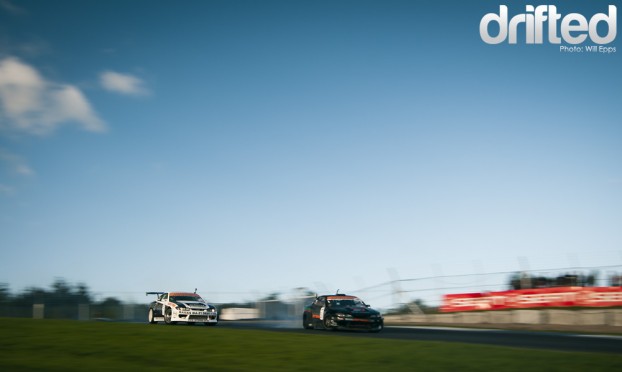 But after a few extra decision aiding runs the winner of the Knockhill round of the British Drift Championship was crowned, Danny was going all out into the last corner, slightly overshot and landed in the gravel, giving Phil a 10-0 win at round 5! 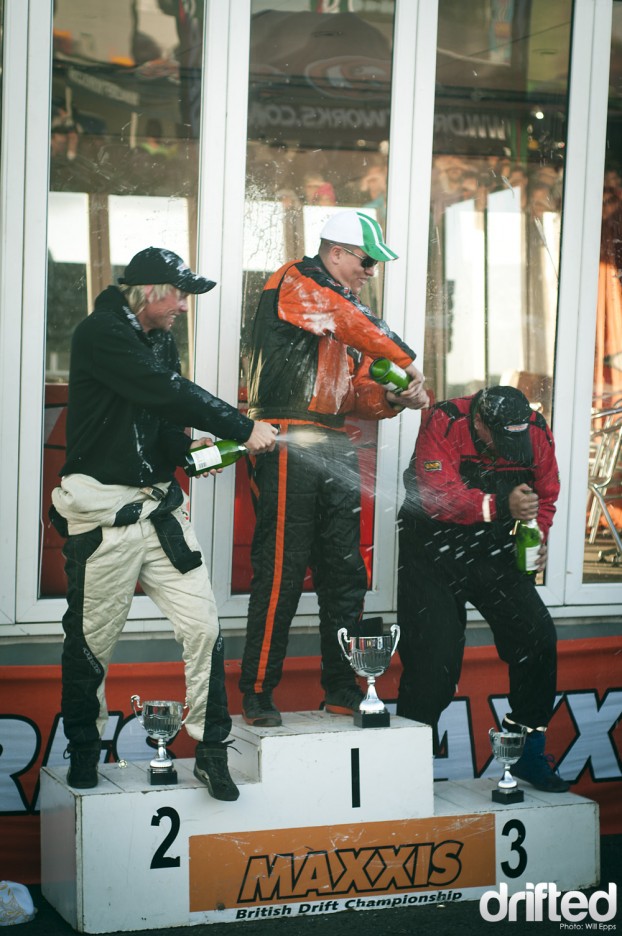 After a tense and exciting final round the British Drift Championship 2010 comes to a conclusion. The final season standings are as follows –

Congratulations to Phil Morrison for taking the Pro Class and Ian Phillips the Semi Pro Class! Next season seems a long way off but Drifted will be following the BDC in the off-season bringing you news of the cars being built and the faces and names to look out for in 2011.