The final drift event of the season at Evergreen Speedway was held a couple of weeks ago, marking the end of another great season. We have seen many local drivers turn pro and go on to compete in the big leagues, names such as Walker Wilkerson will be talked about a lot next year and this track has become proving grounds for many a drift star of the future. 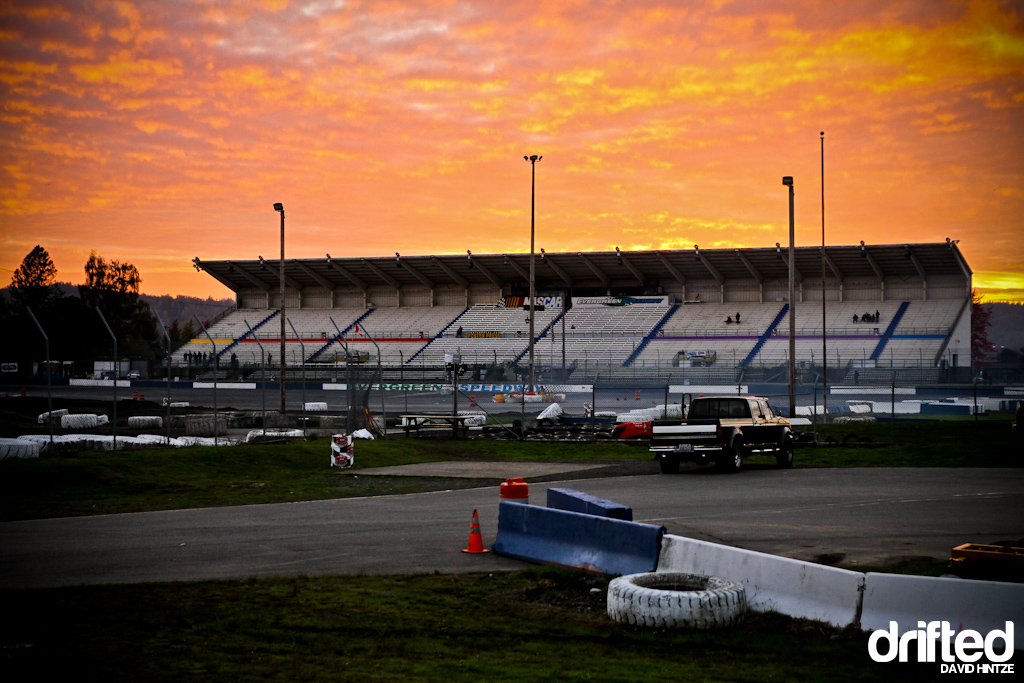 I had not yet made plans to attend this event as it was an open lapping day,  but I was soon convince otherwise when big names such as Walker Wilkerson, Roland Gallagher, Kory Keezer, Rob Primo, and others were added to the list of people attending. The amount of other cars that came was pretty impressive, more people rolled in and out throughout the day and there were plenty of new and familiar faces in the pit area. 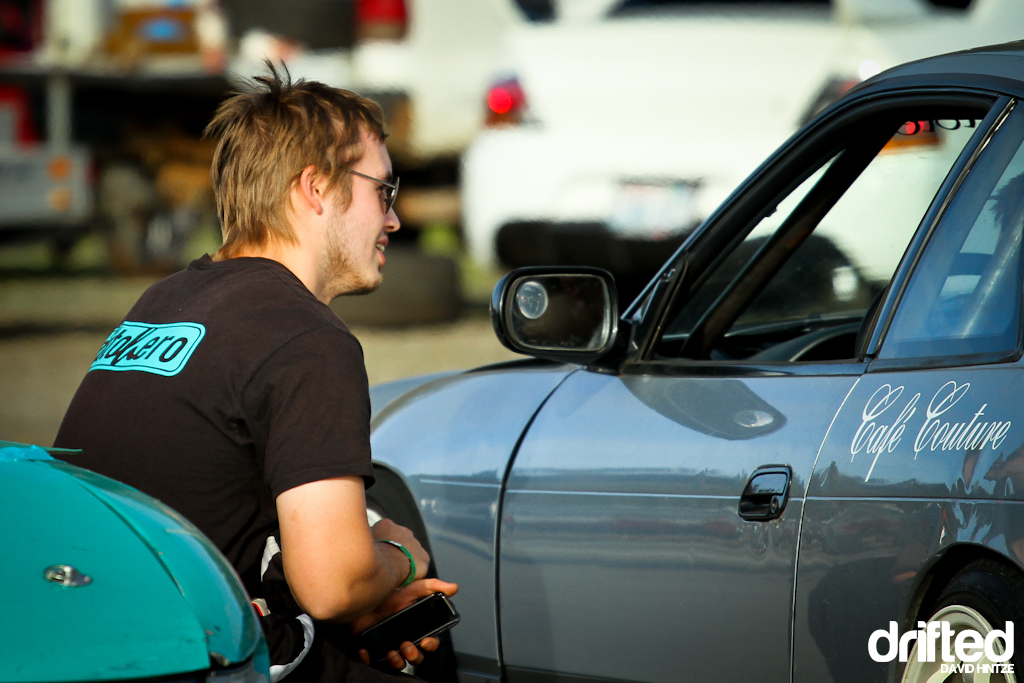 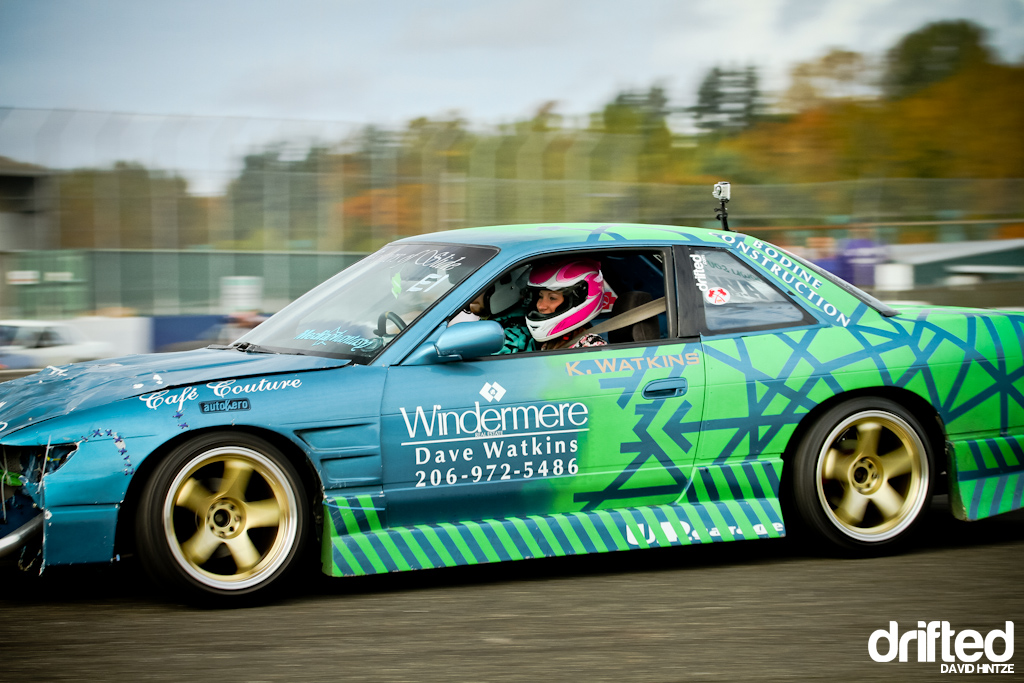 The order of the day was fun. The only rule, drive with a smile. 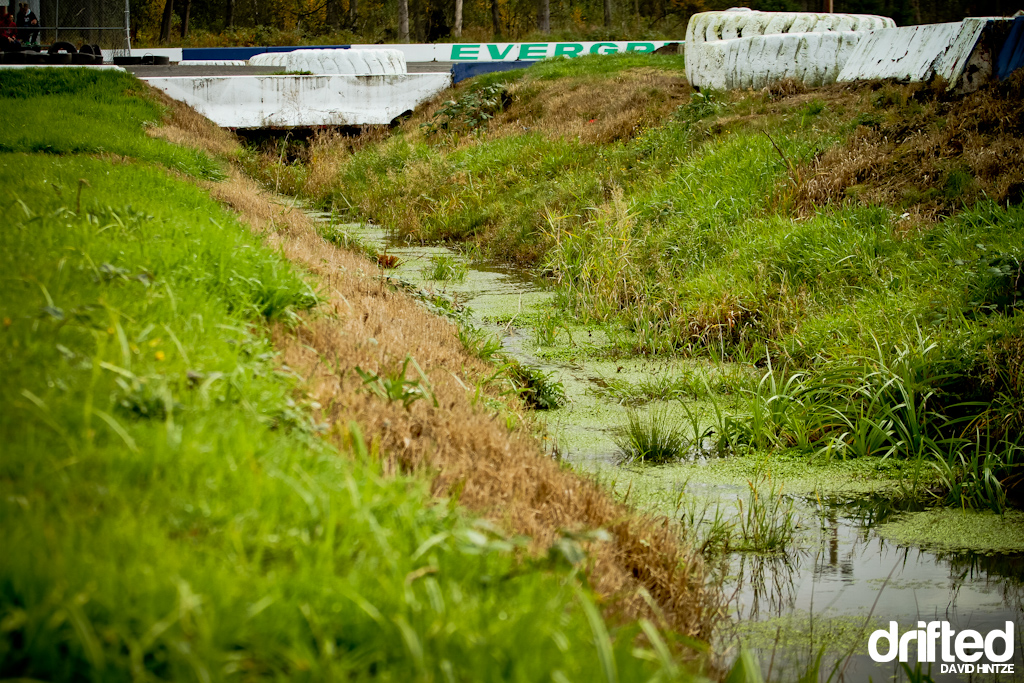 I caught a cold midway through the event, that sucked, I blame whatever organisms are growing in the drainsystem the track utilizes, I have no doubt this murky liquid mess will dissolve flesh like the endsceen to Raiders of the Lost Ark. 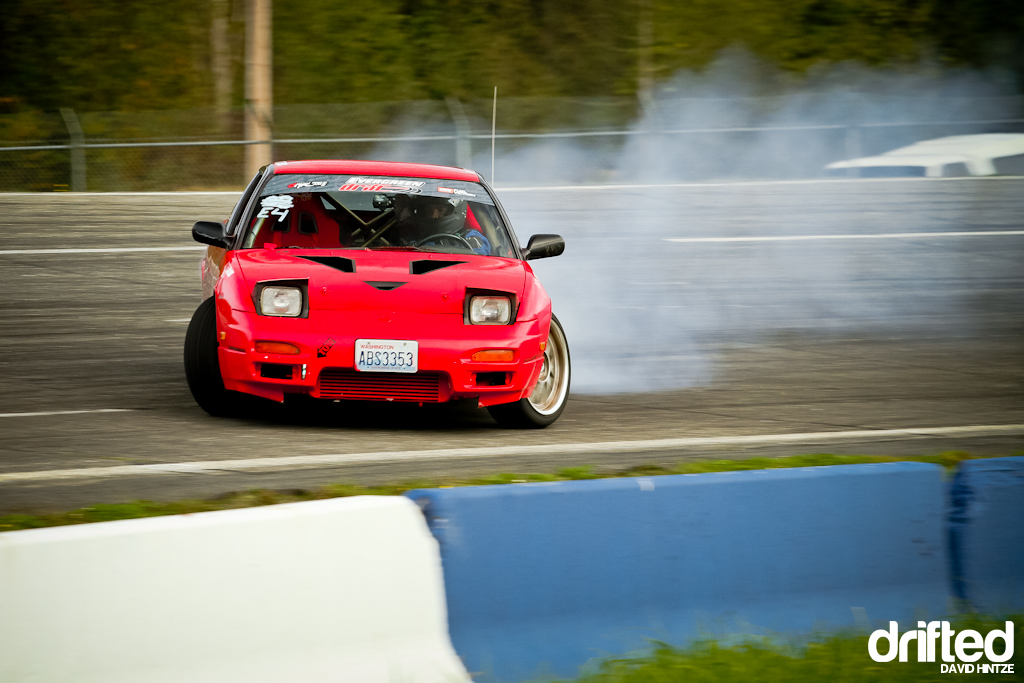 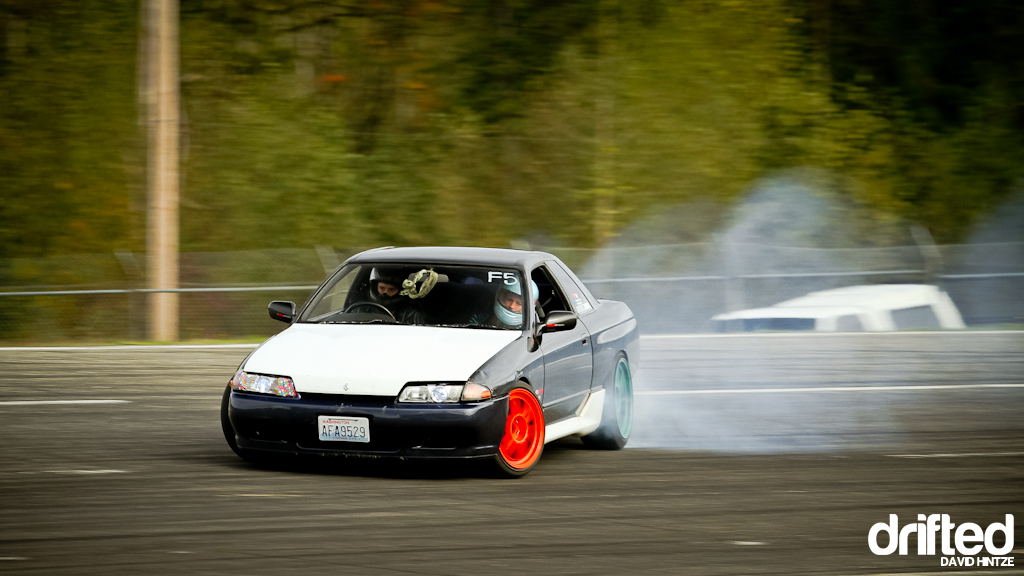 This proved for some camera angles that I had never had the opportunity to shoot at evergreen and I was pleased with the results. 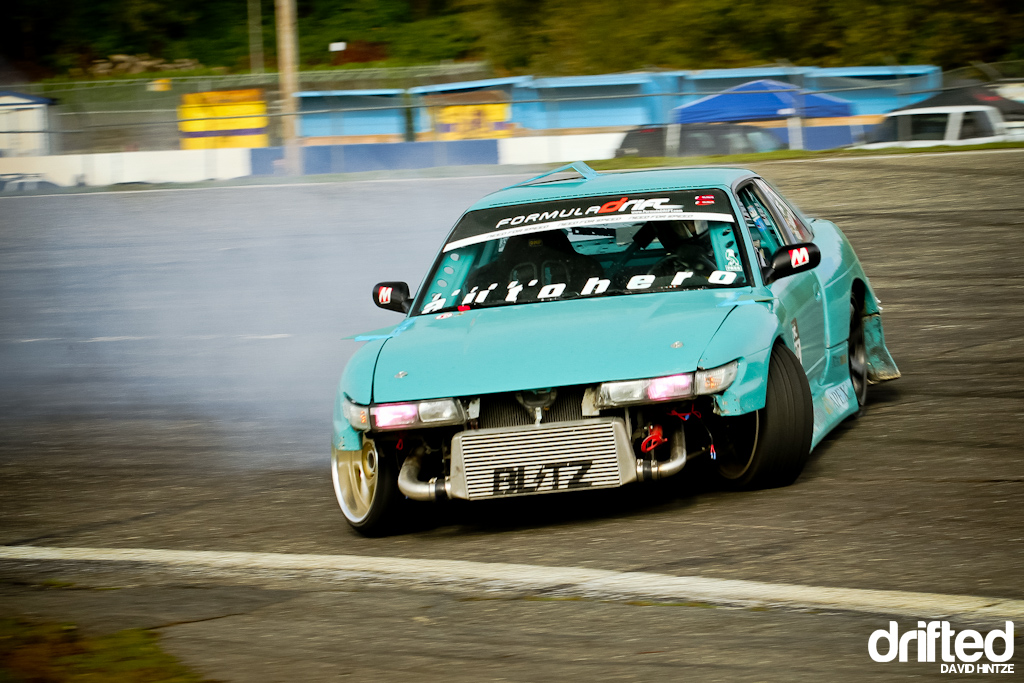 Roland Gallagher coming in hot from a 5/8ths run down the 3/8th bank heading back to start. 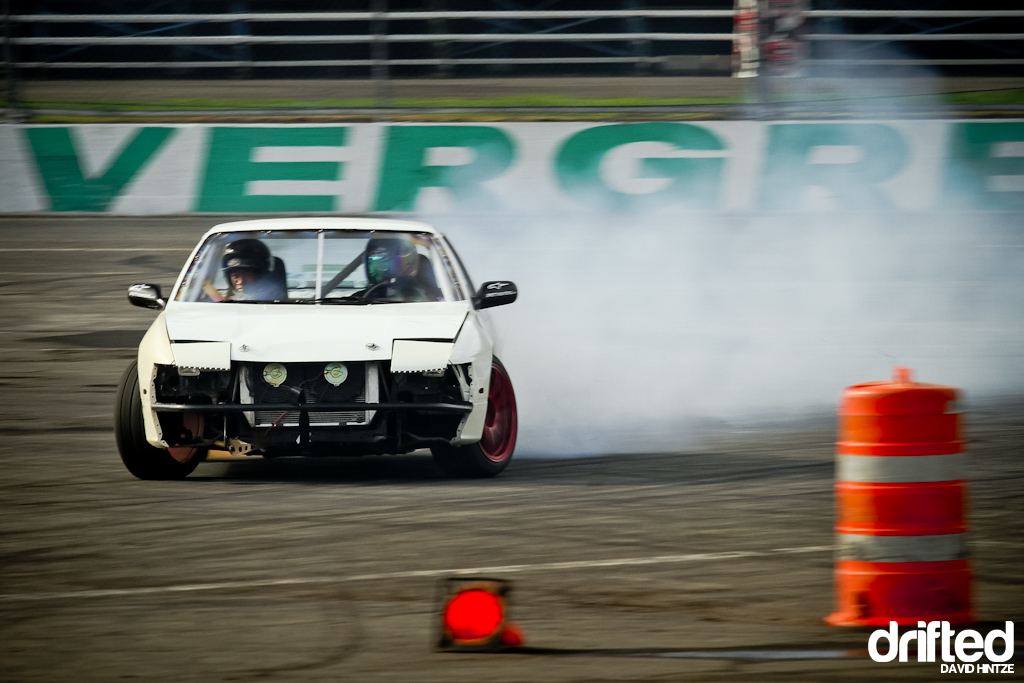 Andre is one of the newer drivers to tackle the 5/8ths massive bank on the track. 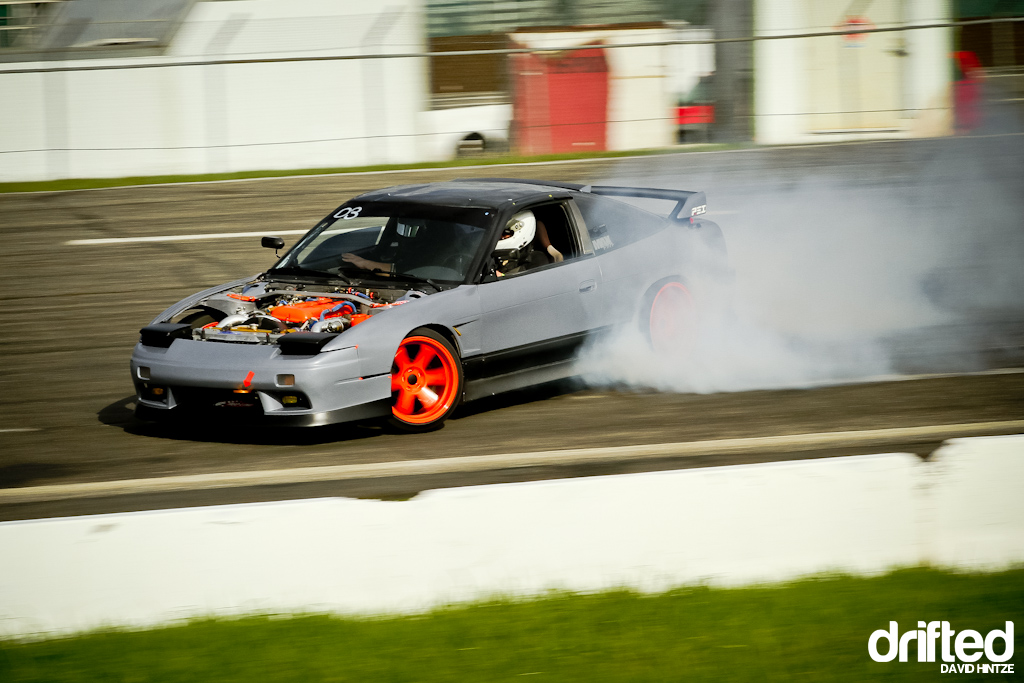 There was a pretty cool selection of cars present on the day. Nissans aplenty as ever but the variety within that selection good! 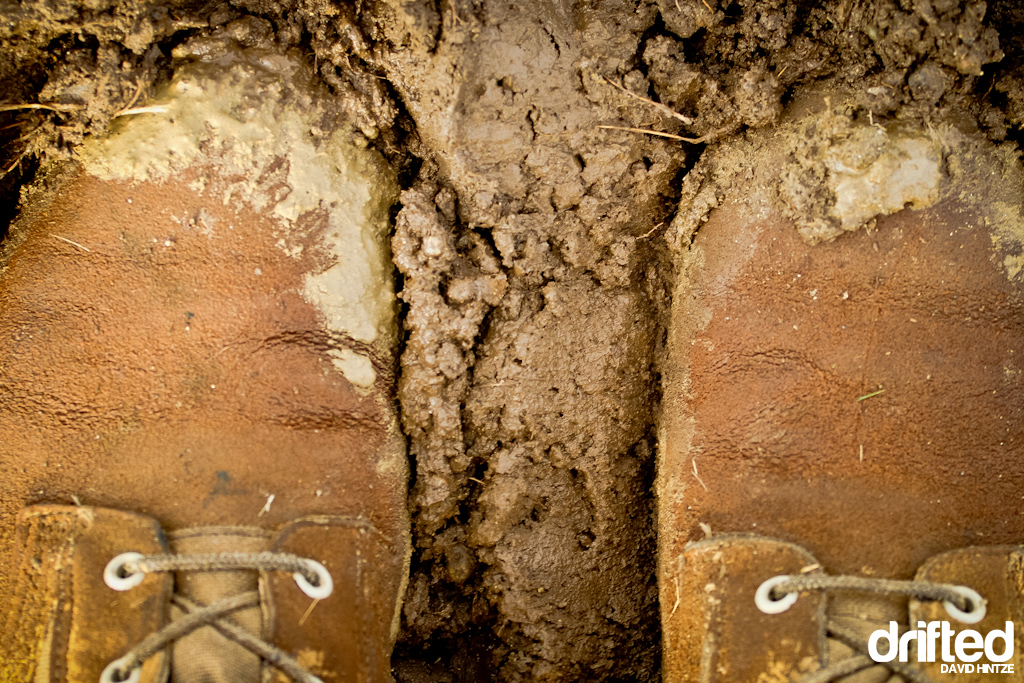 The constant rain from earlier in the week left the inner parts of the track very muddy. The recently added motorcross track between the 5/8th and 3/8th stretch provided some high dirt jumps to stand on, but the long trudge through the mud left anyone without boots not feeling up to it. About 3 of us media walked over, and even though my boots lacked any traction whatsoever, mud stuck to them like magnets. 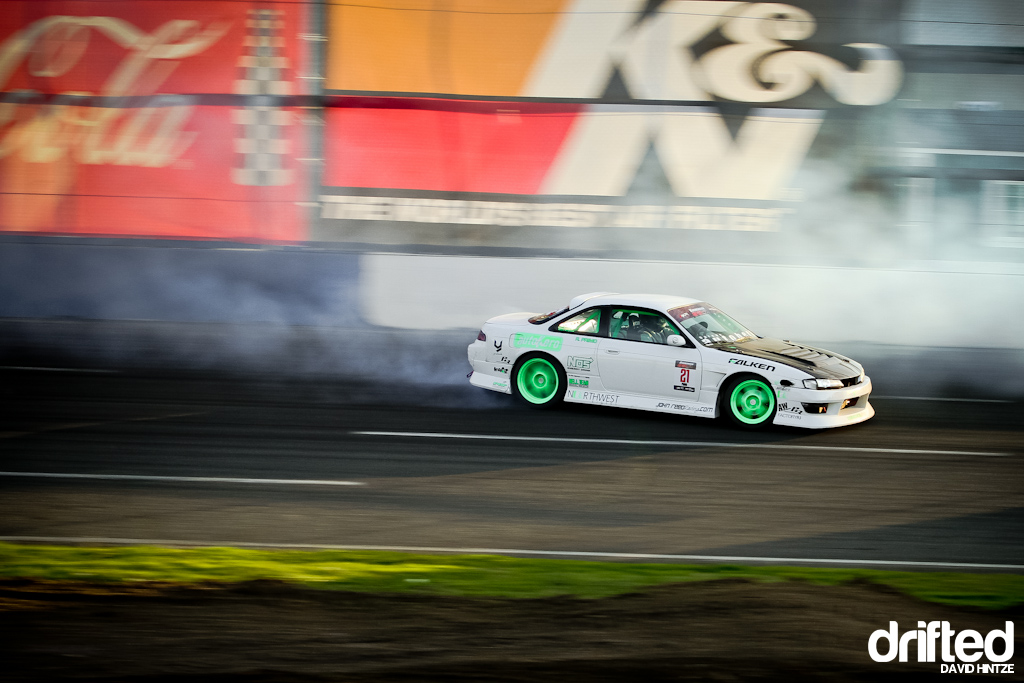 The jumps provided a decent enough view of the 5/8th bank where the pro drivers and willing caged cars were doing practice runs.. This is Rob Primo on the bank. 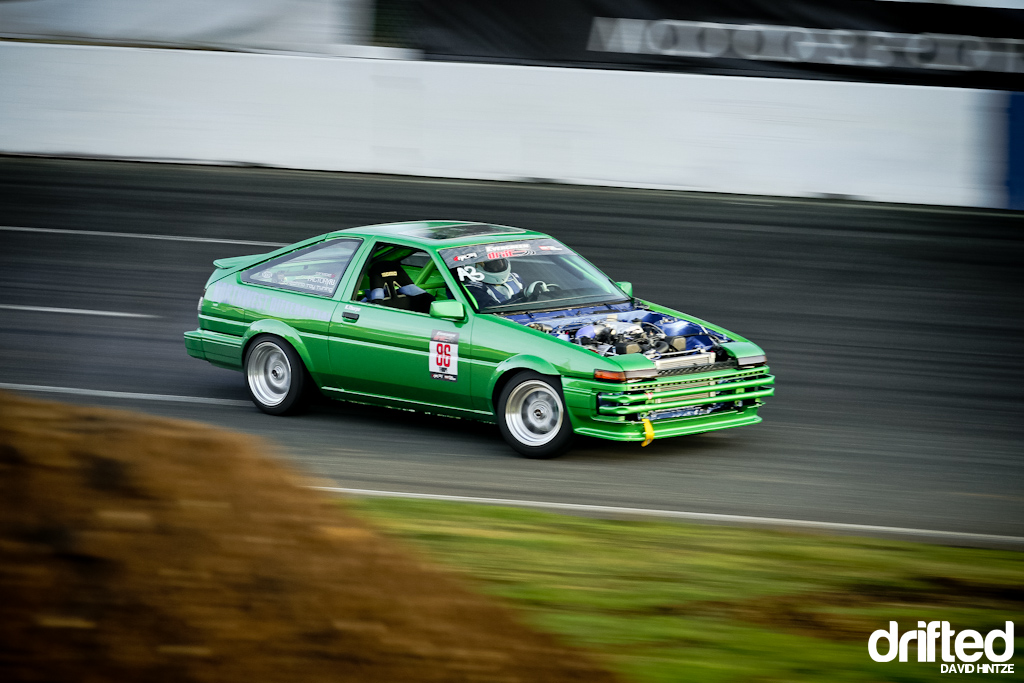 Kelly Thorpe had his time on the 5/8th, something he just recently started trying after finishing up the build on his car, and Andre was doing the 5/8th for his first time, and seemed to be getting the hang of it very quickly, some work on his line and angle, and he will be a fierce competitor in this upcoming pro am season. 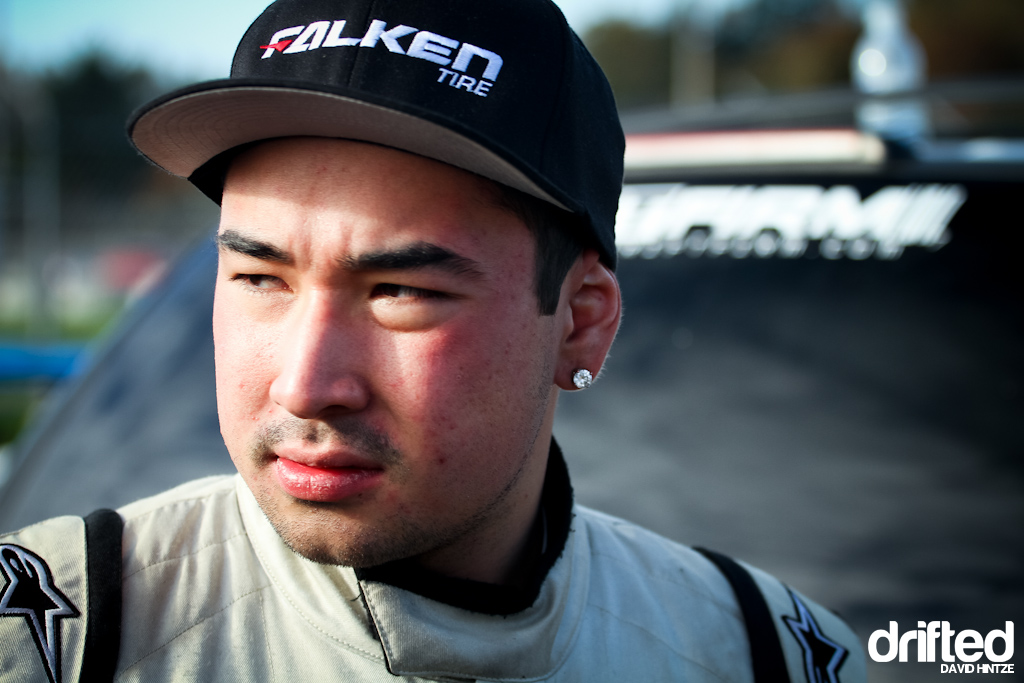 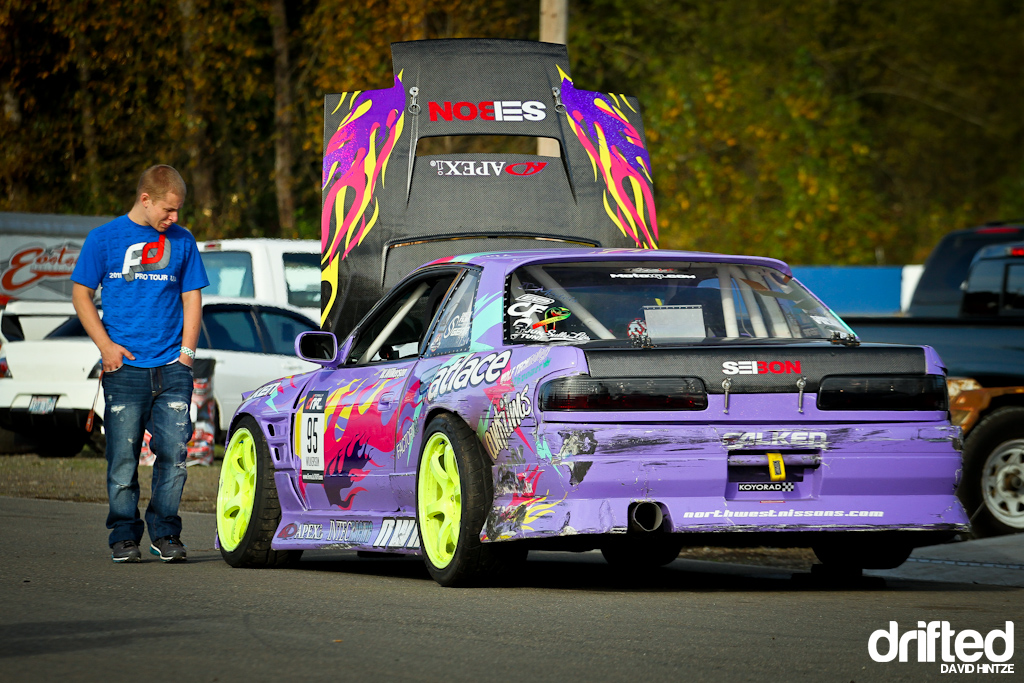 Walker pits up for a tire change and quick fix while pit walkers freeze and take a look at this beauty of a car. I can’t wait to see it in FD again next year. 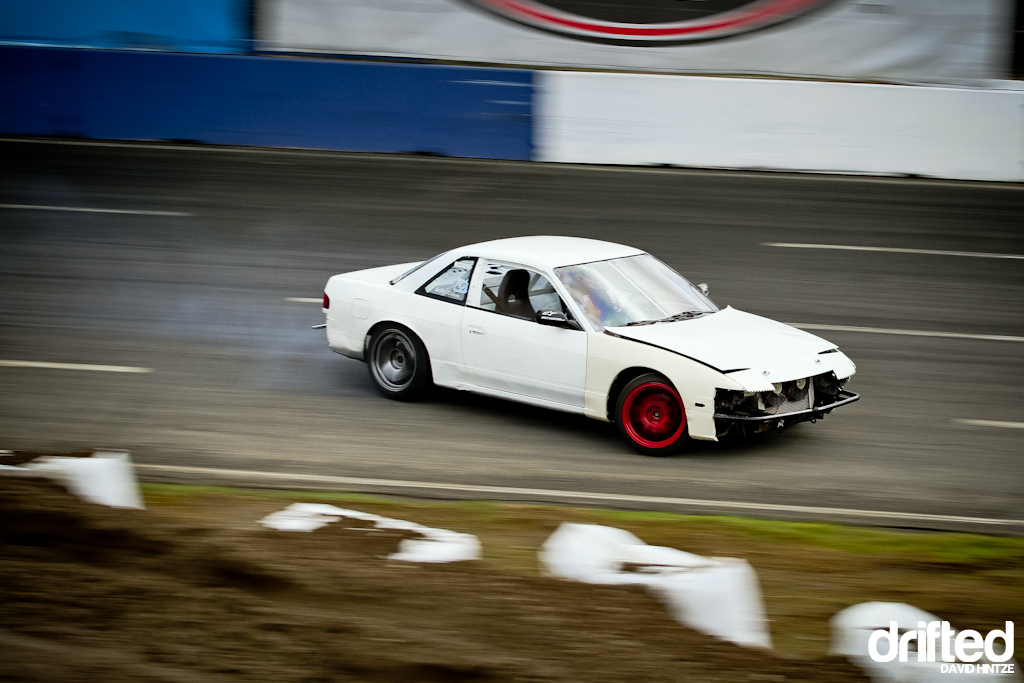 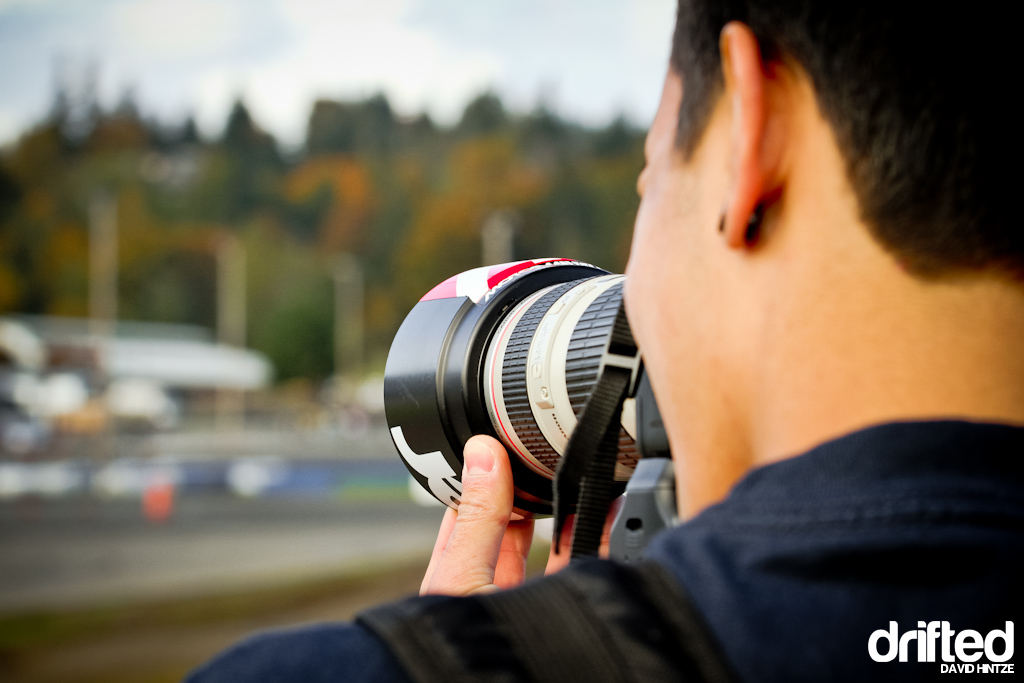 There was quite a good turnout of media at this last event, all in support of their drivers and watching some of the best have one last go on the track before the season end. 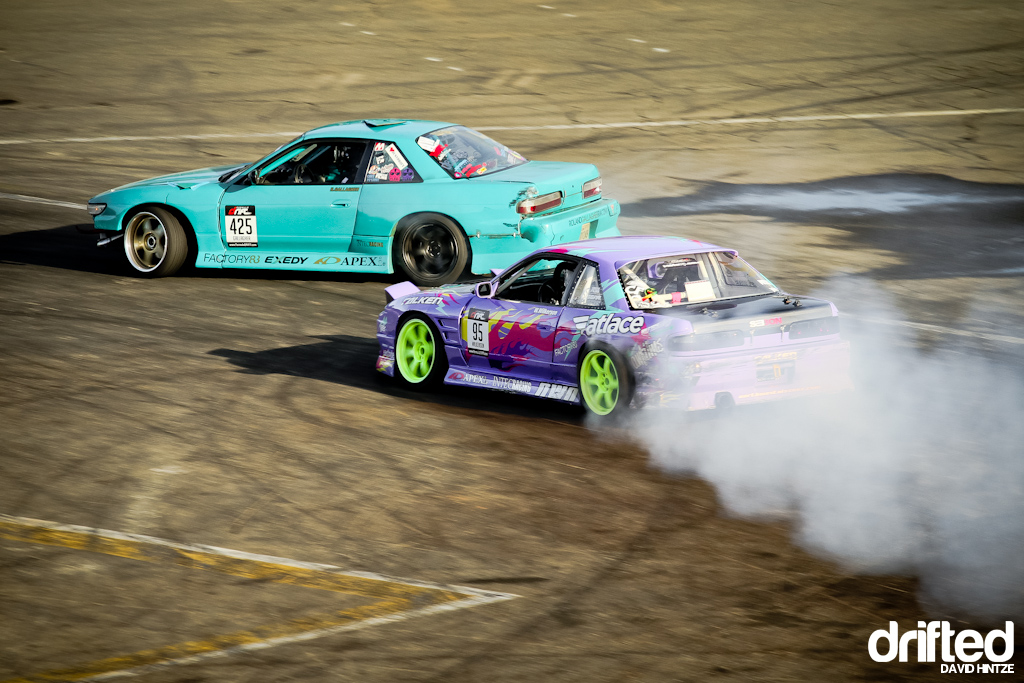 Roland Gallagher and Walker Wilkerson coming off the 5/8th bank and getting as close as possible. Some great runs by these two throughout the day. 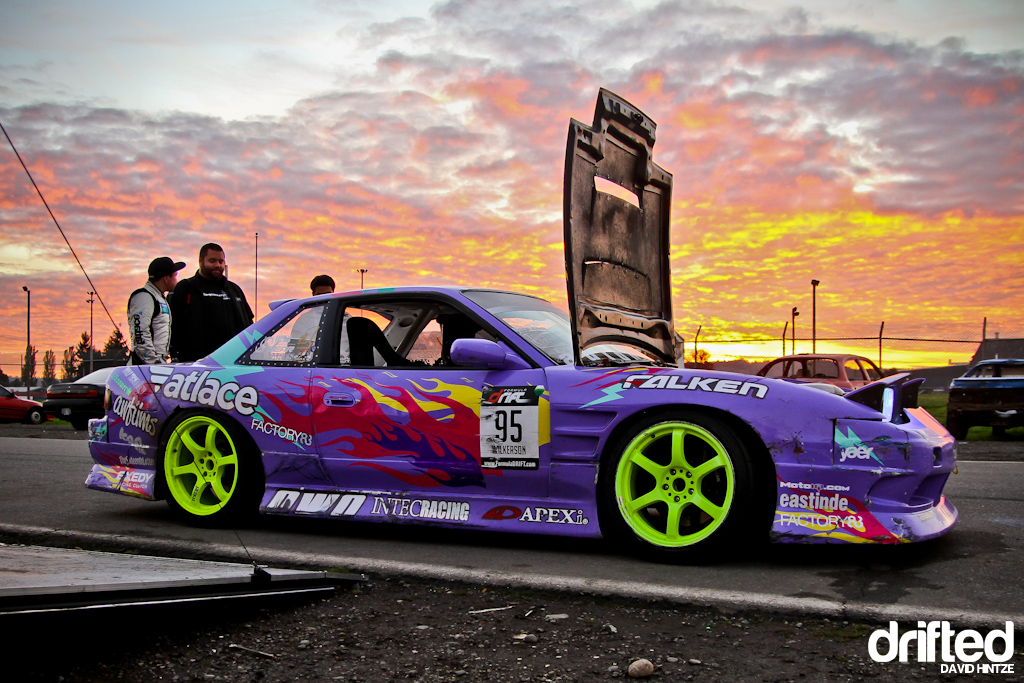 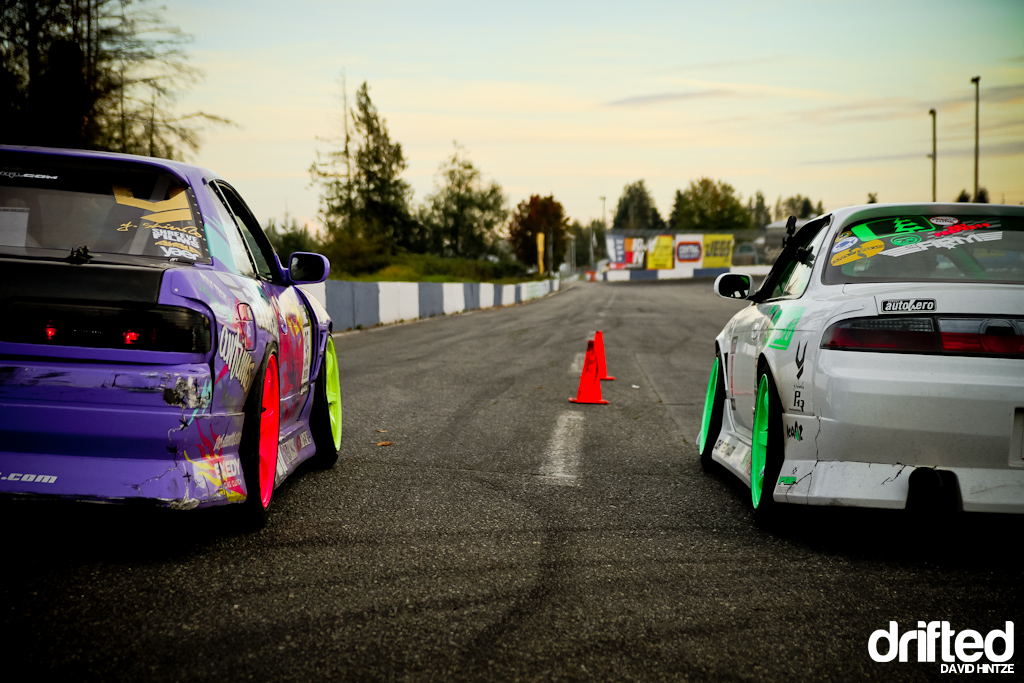 « EVENT: AE86 Festival and Skyline Owners Battle
BEHIND THE SCENES: D1NZ Round 2, Pukekohe »