BEHIND THE SCENES: Drifting the Gauntlet with Gardella Racing

Of all the drift series in the world there is one I’ve always wanted to shoot. Widely regarded as the pinnacle of the sport Formula D just looks special. So when the Gardella Racing team asked me if I’d like to shoot a round with them I didn’t need to be asked twice, this was Formula D! After lots of conversations with Gary Gardella, Eric O’Sullivan and his brother Karl we sorted out the details and I booked my flights.

What kind of kit do you pack for a shoot like this ? Well I took the decision early on with this film that I wanted a personal feel, I wanted to be able to get in amongst the team and show what its like to be at an event like Formula D. So with that in mind I decided to shoot everything handheld .. No tripods/tracks/rigs at all, just a viewfinder, Follow Focus, 2 bodies and 6 lenses. I did end up taking a Glidecam, but given I hate it (read : can’t use it), it stayed safely packed away save for one shot.

I arrived in Newark on Wednesday, Karl picked me up and we headed into Brooklyn to hang out for the afternoon. I’ve never been there before, such a cool feel about the place! We stopped by this little diner for some Buffalo wings, we asked for medium strength sauce …. 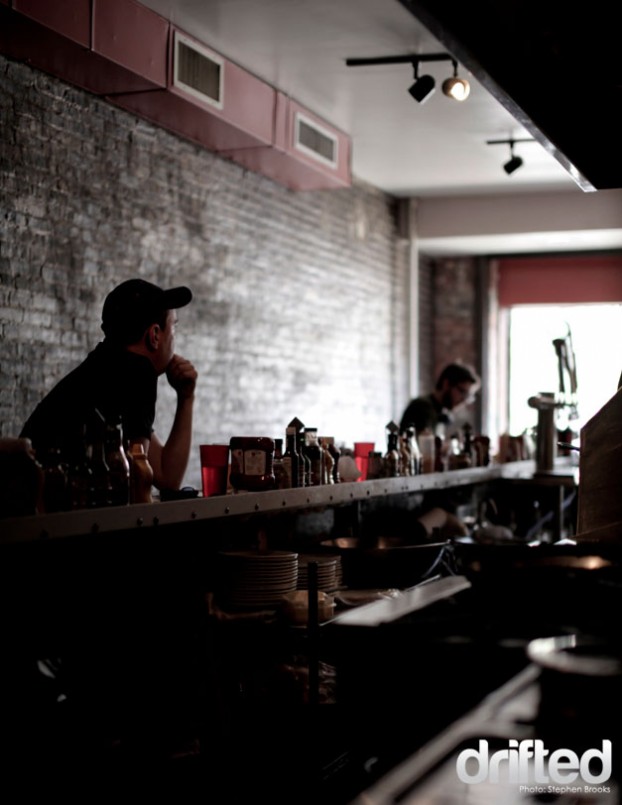 After drinking about 23 gallons of water to extinguish the burning hell that was ‘medium strength sauce’ we drove out to Jackson to meet up with Eric and some of the Gardella family. 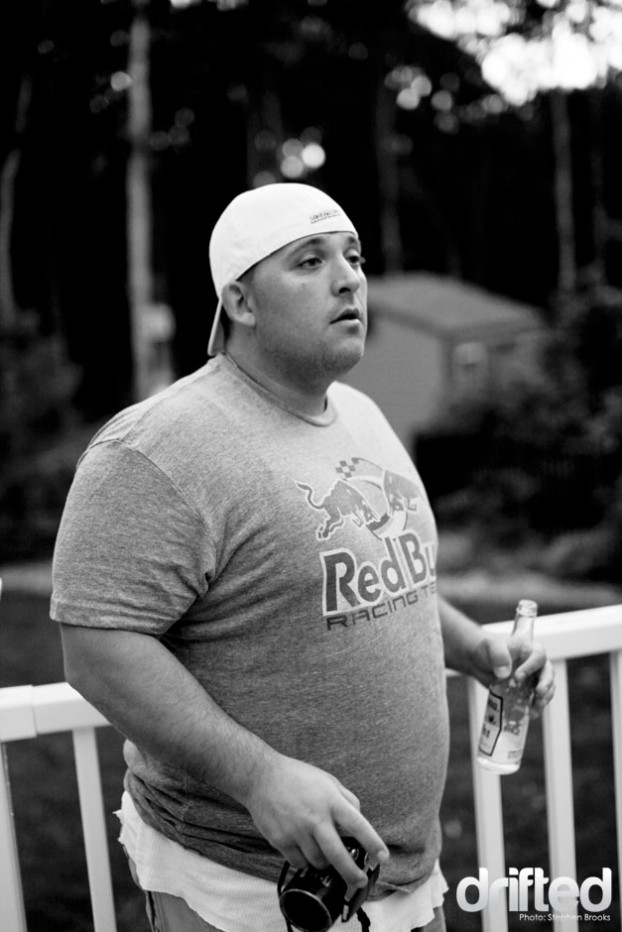 Hanging out with Richie Gardella for the evening was fantastic, we managed to get Eric’s interview done too and by around 11pm I was starting to fall asleep. Early start the next day so I headed to bed.

Thursday was practice day, I took the opportunity to film as much as I could of the Gardella cars getting to grips with things. With practice not starting till late in the day the sun was low in the sky and the light was incredible. Friday was again practice and qualifying.

An interesting point is barely anyone on the grid runs door glass, given what I do this is fantastic, it means I can shoot the drivers faces right up until they leave the start line. It’s a real bug bear for me in the BDC that drivers are made to run with windows up meaning I can’t shoot them. Obviously safety is paramount so I was keen to see how Formula D allows drivers to run without glass at all. Simple…. the drivers have to wear arm restraints. I hope the BDC follows suit or at least offers the drivers the option. 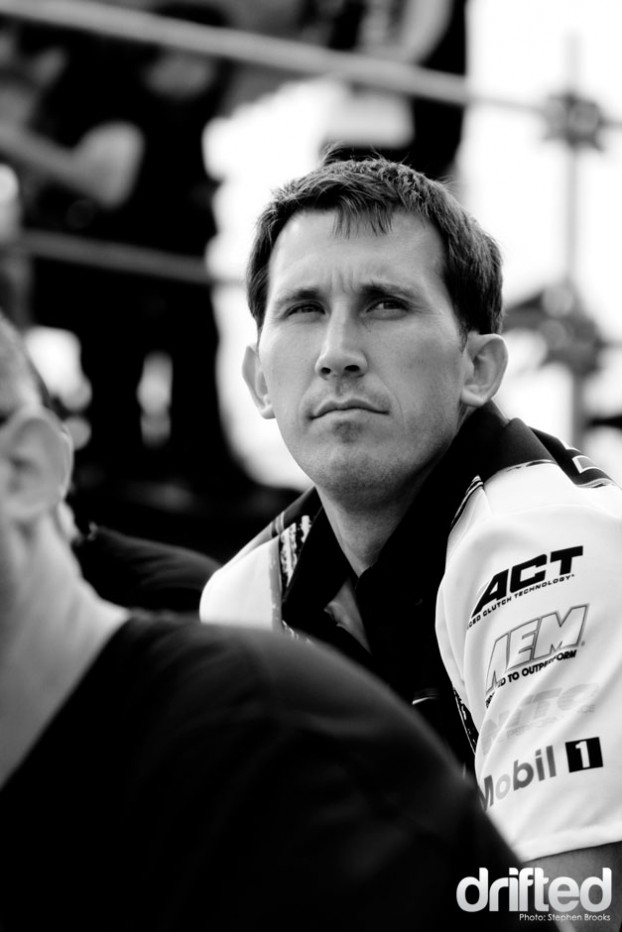 Gary acts as their spotter and keeps the guys informed of how their doing constantly, giving feedback and pointers where possible. 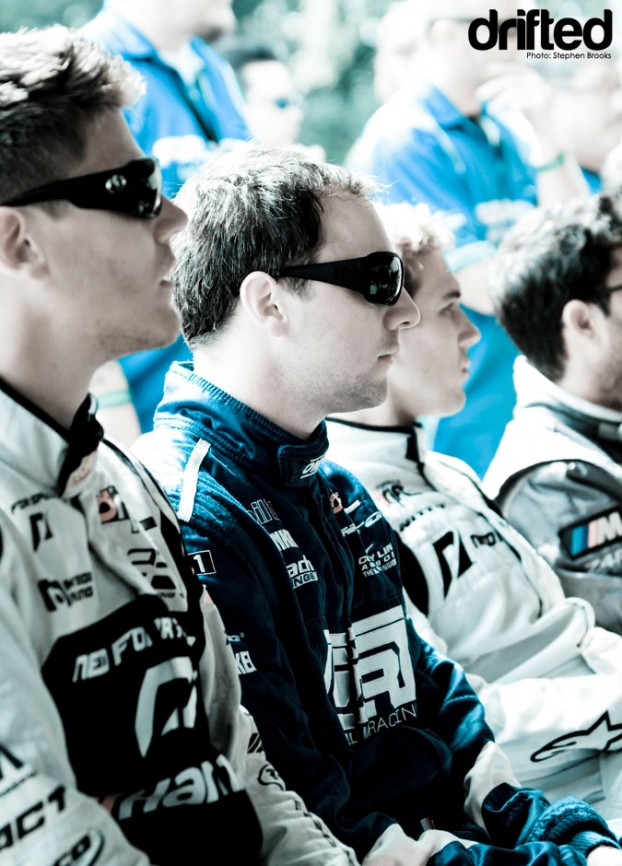 Something I noted was that due to the amount of media present at the drivers briefings its mandatory for drivers to wear their race suits .. not something we do over here.  I personally think it looks fantastic.

After qualifying was finished it rained. In a sort of Mother of all Storms type way. It was chaos…. marquees, tents, kit and everything was being tossed around the paddock area. I can honestly say I’ve never seen it rain like that ever in my life! What I found more alarming was that the Speedhunters guys were running around in it taking photo’s in it! I would have joined them only I was one of about 20 people trying to stop the Gardella Solstice from literally being blown away.  After it had calmed down I ventured outside.… 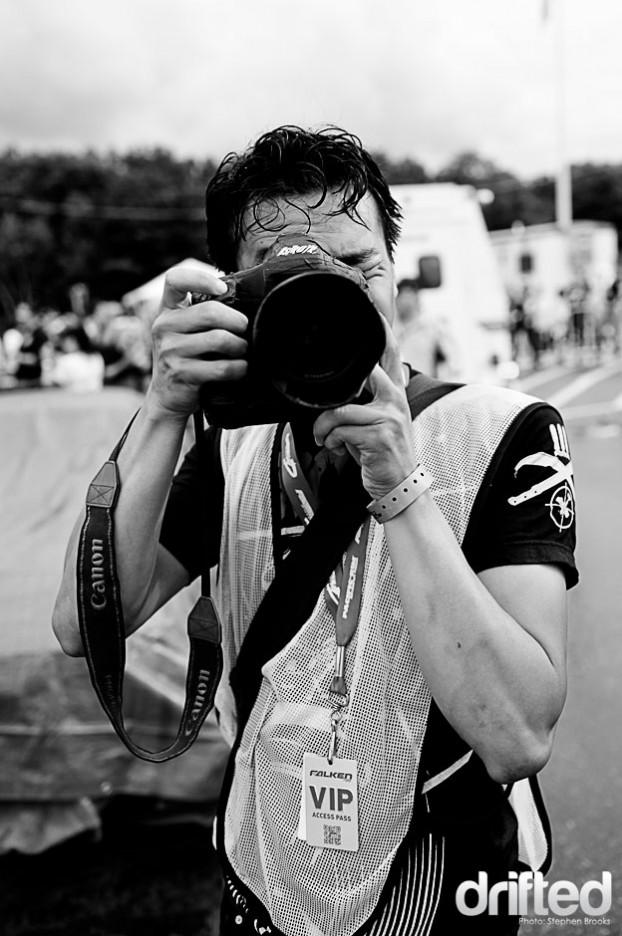 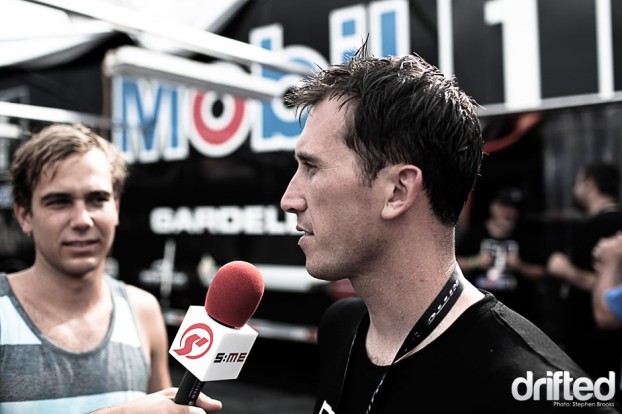 Here Matt Powers from Team Need For Speed interviews Gary Gardella about the fact the Need For Speed Marquee ended up on the roof of the Gardella Racing truck! Honestly, I kid you not. 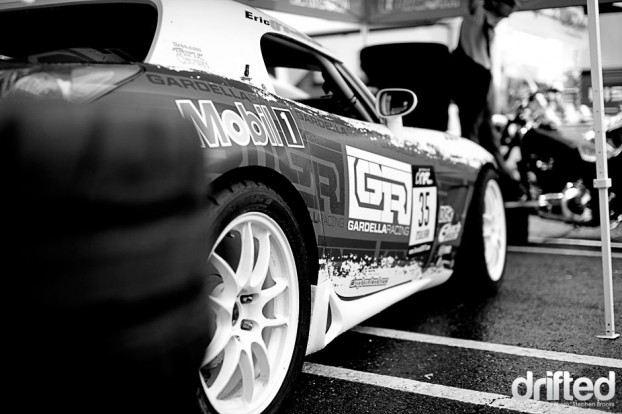 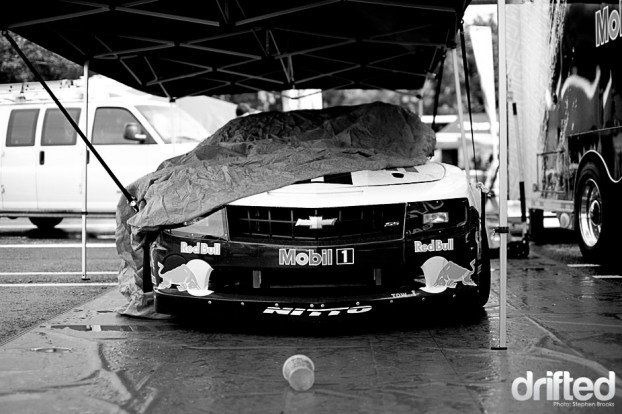 Both the Gardella cars escaped the chaos unharmed thankfully.

So Saturday was race day, but you’re gonna have to wait for the film for that one, didn’t really take any stills I’m afraid. Sunday we woke up late, headed over to Eric’s house, ate some breakfast and then headed out to Gardella Racing to drop off some kit ..

Eric’s transport whilst out in the US is this Ford F350 Dually. The stock engine has a stock turbo the size of a house. Everything in America is enormous! 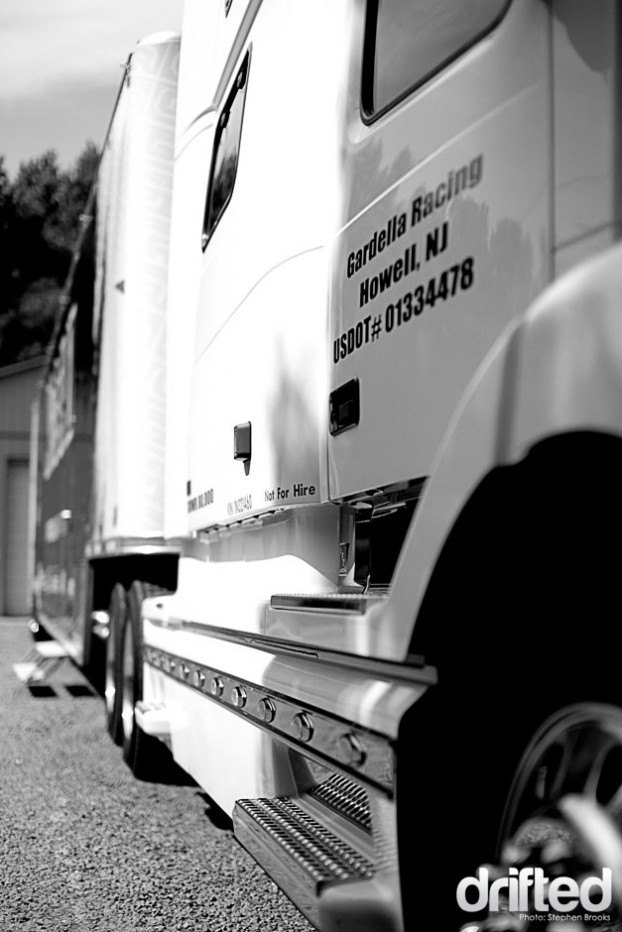 Parked outside the Race shop was the Gardella truck. It’s difficult to appreciate just how big this thing is, take a look at the doors just under the ‘1’ of the Mobil1 logo, should hopefully give you some sort of scale!

I was heading back to the UK later that day so we dropped by Gary’s on the way back to the Hotel to say our goodbyes, he suggested running by his parents house before I left as there was a couple of cars he thought I might like to see . This was probably a slight understatement.

I was taken down to Gary Seniors garage, in fact garage isn’t the correct word, it’s more like a mini race shop as you’ll see. Senior took off the covers to reveal a 1949 Cadillac Couple on air ride!  Next to it was a 1937 Ford Slantback which is undergoing restoration. Rather than me post comments I just think it’s best if I let the pictures do the talking. 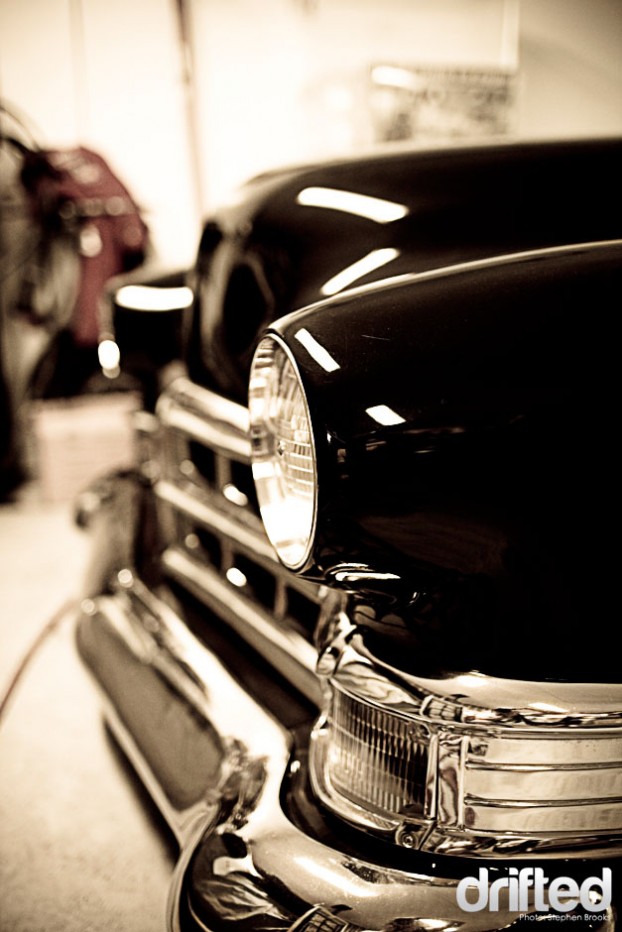 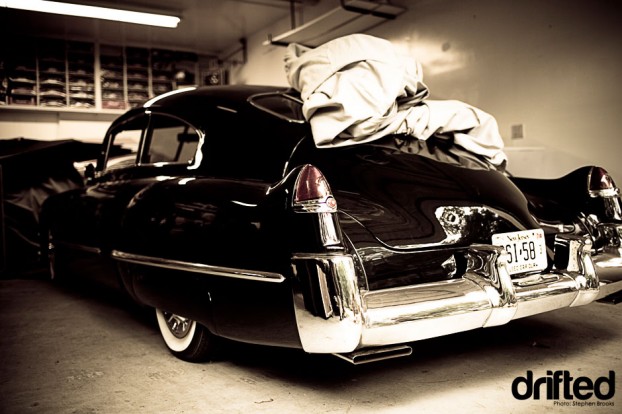 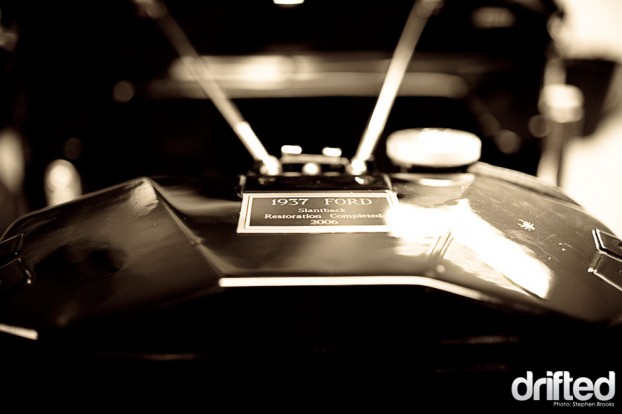 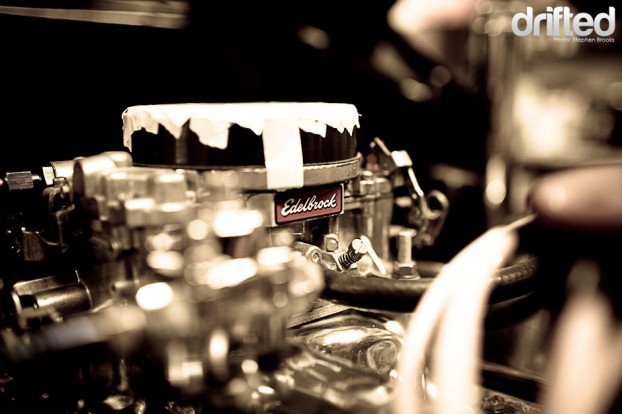 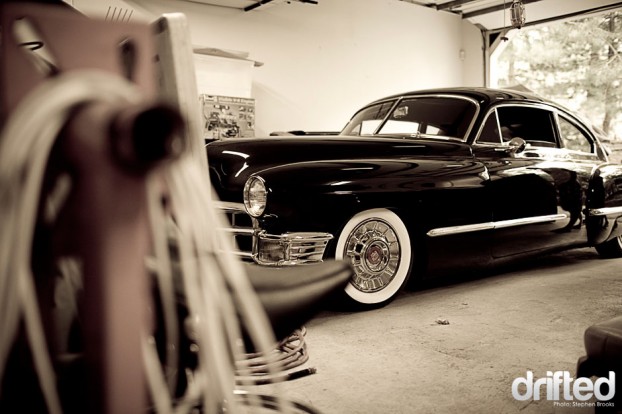 And then they showed me this …

In the corner just under some sheets was the Gardella Racing record holding Honda Civic, 8 Second car at 176 mph …. just there, under some sheets in Seniors garage. As you do! After that I headed off to the airport back home.

So what did I make of Formula D? It’s a complete aural and visual assault on your senses, everything is super professional, the crowds are huge and it’s a true professional motorsport. Their organization is outstanding, it ran like clockwork and you really felt the sense of it being a show.

The whole trip was amazing and I cannot wait to get back out there for some more projects. I’ll be working more with the Gardella guys over the next few months so watch out for more posts .. in the meantime ‘Drifting the Gauntlet’ will be released tomorrow Tuesday 28th June.