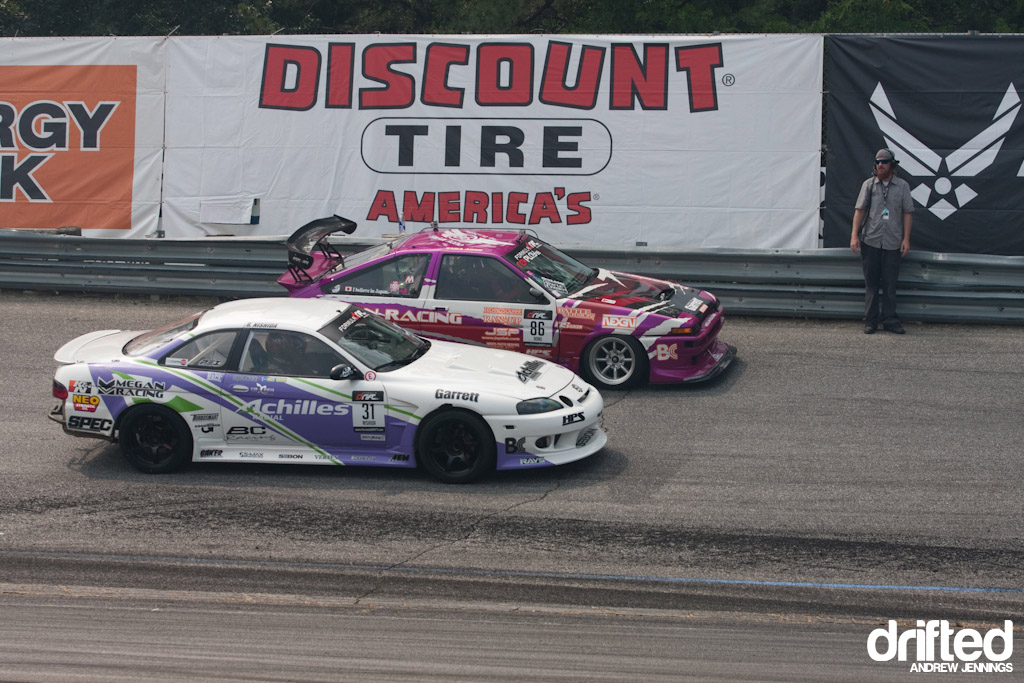 Round 4 of the 2012 Formula Drift Pro Championship finishes out the East coast run with a stop to Wall Speedway in New Jersey. Those who may be unfamiliar with this track can check out my intro to the circuit from last year, or even my welcome post from 2010. I’ve been coming to this event since 2007, and it never fails to present some seriously close drifting action and car-mangling wrecks up against the sloped banking of the oval.

The track itself is pretty small, and always has a laid back atmosphere without all the hiking to get between the paddock and the course. Even the track officials had a little fun by giving a shout out on the main sign board that runs along the start straight. 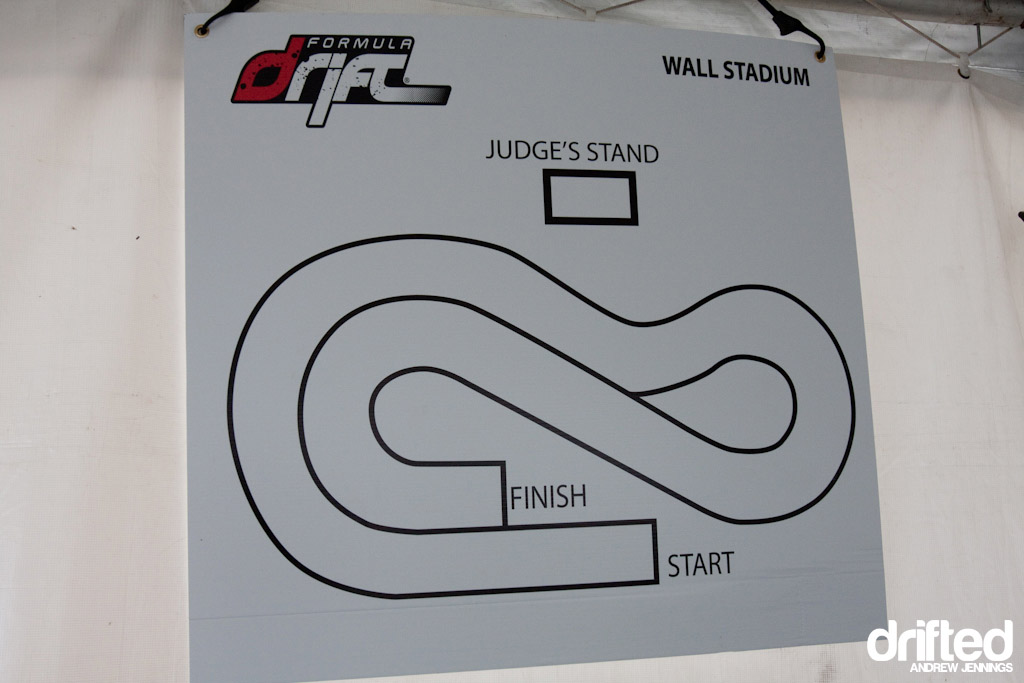 Unlike Atlanta and Palm Beach, the course’s layout is completely unchanged vs. last year. That meant the veteran drivers had a slight leg up over the young talent who may be seeing the oval for the first time. We’ll find out later on if it paid off for the front runners in the championship. Read on to find out how qualifying went to set the grid for Saturday’s race. (Note from lead image at the top of the post: Robbie Nishida at foreground qualified 15th, while Taka Aono in the background qualified 29th) 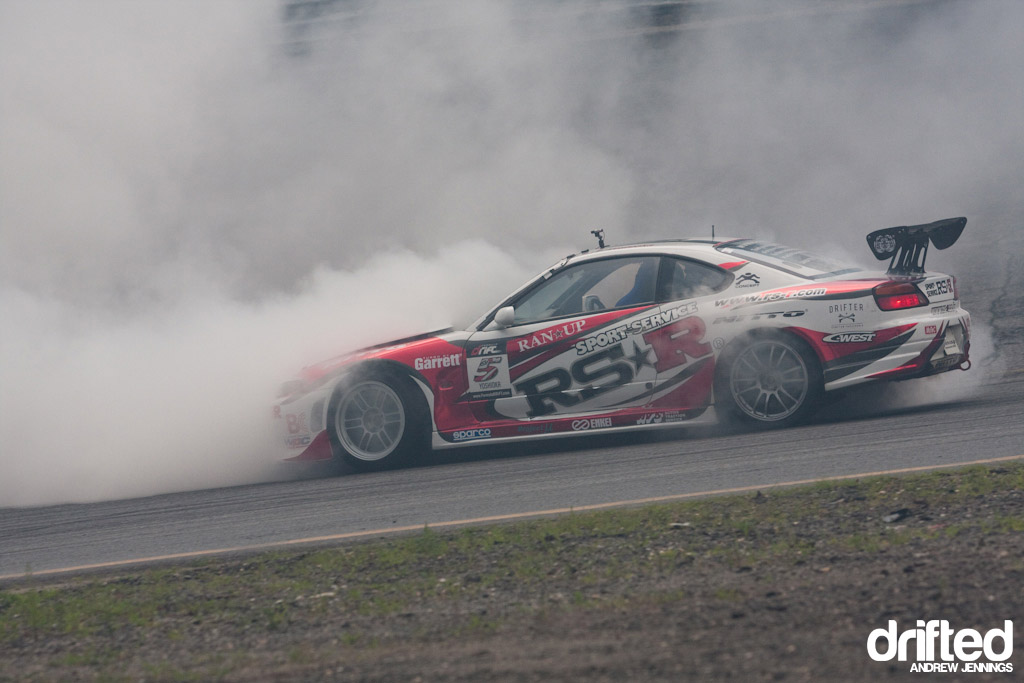 Toshiki Yoshioka in the RS*R Nissan S15 had a rough weekend at Wall. Despite good showings in the first three events of the season, early mechanical issues on Friday prevented him from qualifying for the main event. I have no doubt that the team will have the car sorted out for the next round at Evergreen Speedway, so look for him to bounce back strong there. 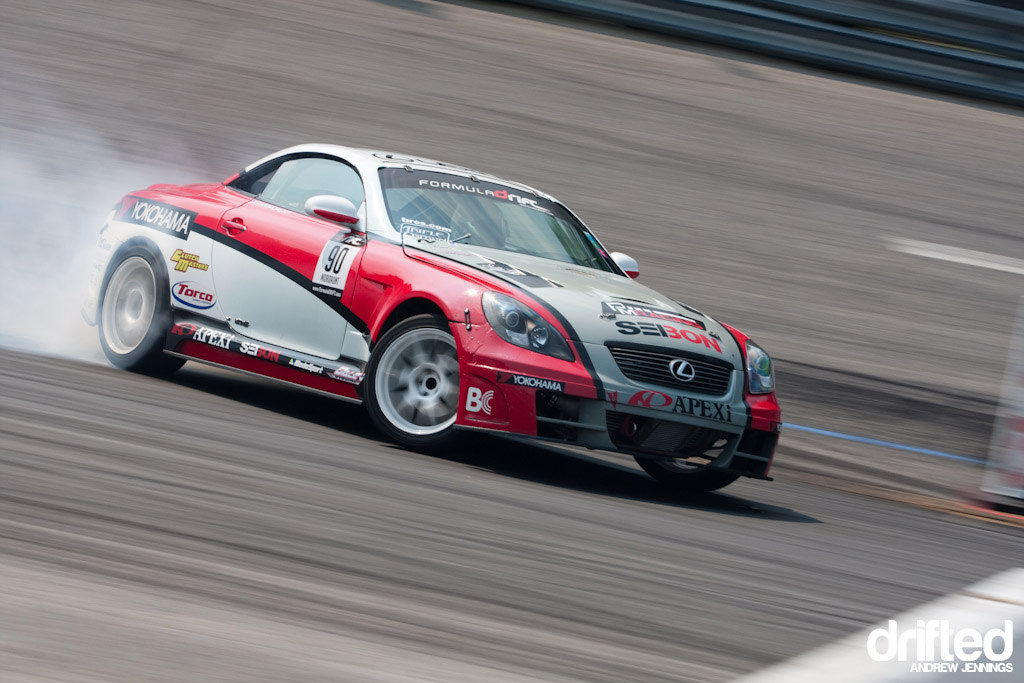 Pat Mordaunt seemed to have gotten his Lexus SC dialed in for the short track. He powered through the course to qualify 24th overall. 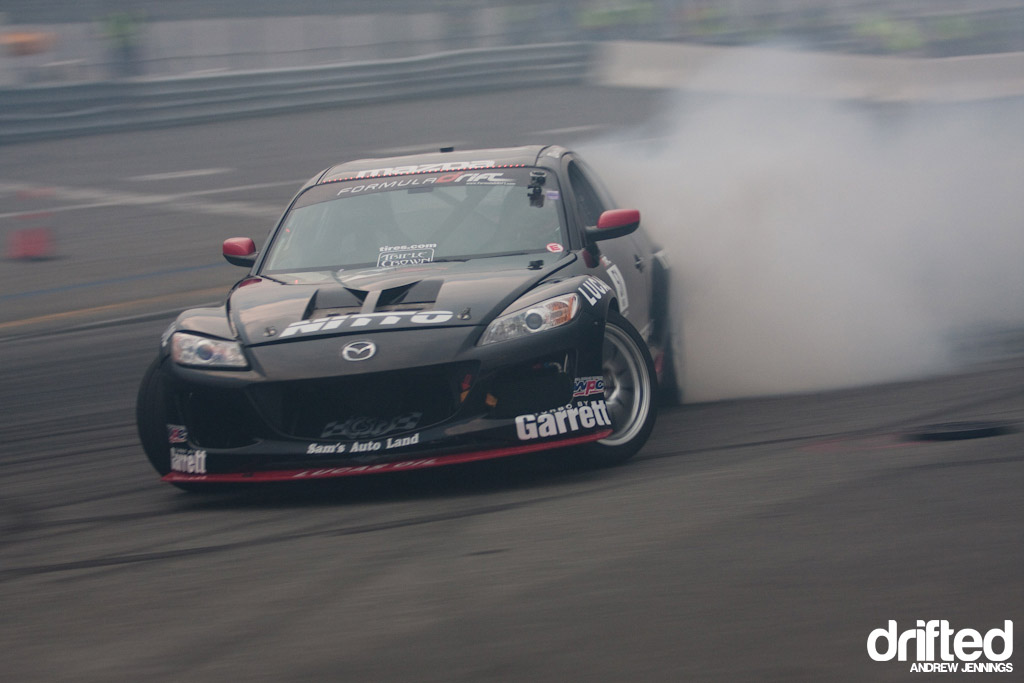 Likewise Joon Maeng has traditionally enjoyed the quick transitions in New Jersey. He didn’t suffer from any mechanical issues throughout the event, but his team did experiment a little bit with the downforce setup on the car. In qualifying he ran the high wing, and it proved to be just the recipe for success, allowing him to qualify a solid 18th.

Clouds had been rolling in towards the venue all day on Friday, and about halfway through the first laps of the qualifying session saw the dark sky open up for a light shower. The rain wasn’t heavy enough to stop the event, so the organizers proceeded as planned, allowing the cars to continue their qualifying runs but lowering the minimum speed required to get points. 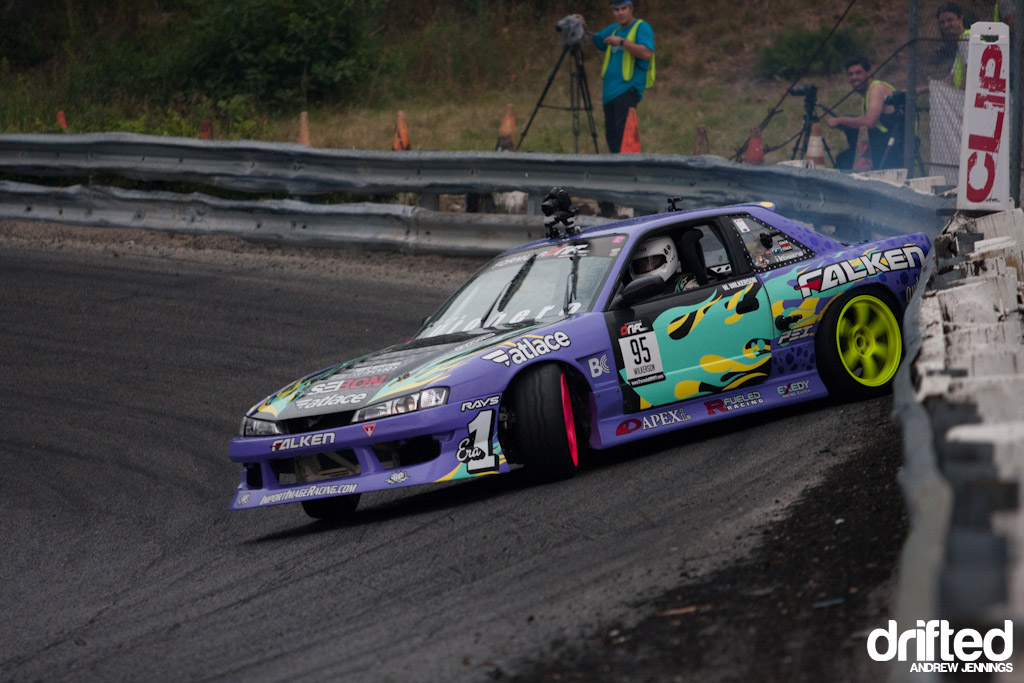 Above you can see Walker Wilkerson’s windshield wipers in action as he tried desperately to find some grip on the course to maintain the racing line. Unfortunately he was one of the first to go out once the rain was steadily coming down and nailed the wall on his first run, eventually putting him into a spin for a score of zero.

Fast forward to Wilkerson’s second qualifying run, and disaster stroke again. As he set off from the line to put in a lap his hood flew up into the windshield causing him to stop on the main straight. Because he had left the starting line it was judged to be an official lap, and he was not allowed another shot to qualify, meaning he did not achieve a scored run from which to make it into the top 32.

As the rain halted and the track began to dry out, second place points holder Daigo Saito in the Achilles Tires/Bridges Racing Lexus SC had no trouble making short work of a set of tires. This was his first time coming to Wall Speedway, and while he showed good speed through both the key entry and exit points, he failed to maintain consistent angle throughout his qualifying runs. He came away in 17th place for the main event, not a good spot to pick up necessary points for the overall championship. 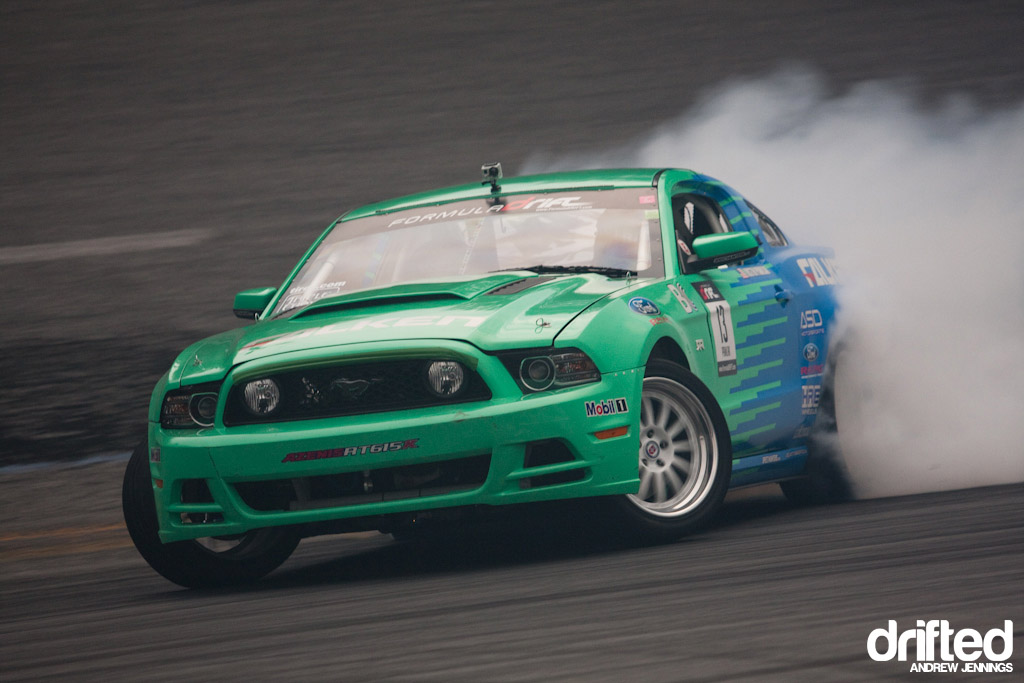 Current leader (who recently became a father!) Justin Pawlak in the Falken Tires Ford Mustang could not manage much better than Saito in qualifying, scoring only high enough for 14th place. 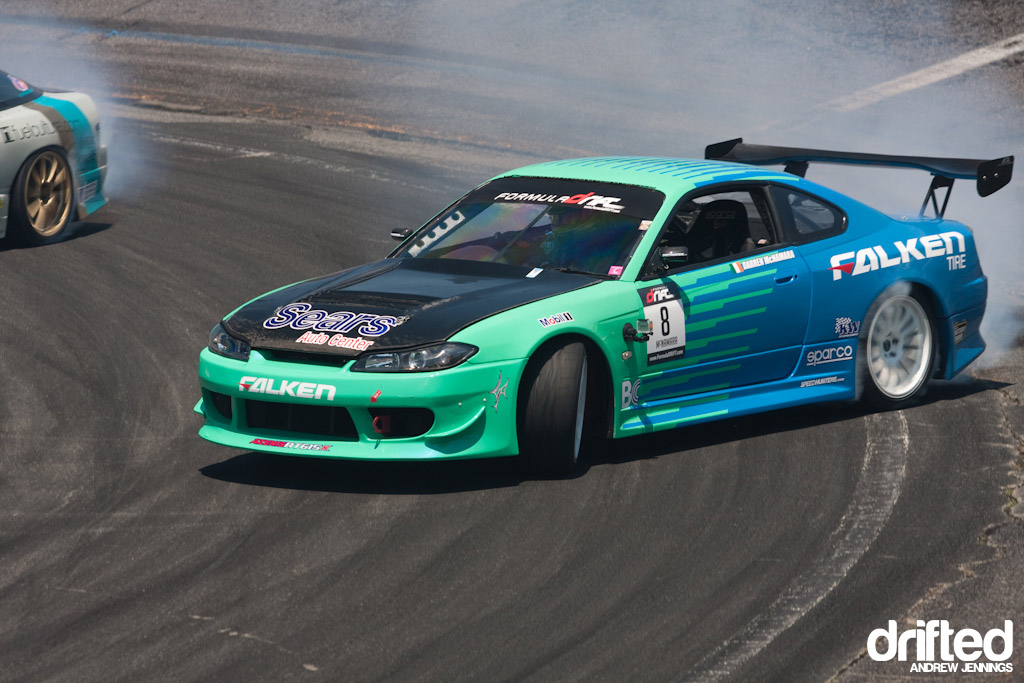 Pawlak’s teammate Darren McNamara was in his third and final ride for the season. He has now switched over to the Falken Tires Nissan S15 that happens to be right hand drive, DMac’s preferred setup. The Nissan chassis was nimble enough for him to qualify in 10th, which normally would be a good thing. In this case, it meant he would face the no. 23 qualifier Matt Powers in the Team Need for Speed/Nitto Tire Nissan S14, a very tough competitor indeed. This just goes to prove what Ryan Kado said to me before the top 32 battles, that there is no longer a safe place to qualify in this series and feel confident of moving on to the next round. All of the drivers have gotten much better to the point where there is no such thing as a ‘good’ side of the bracket. 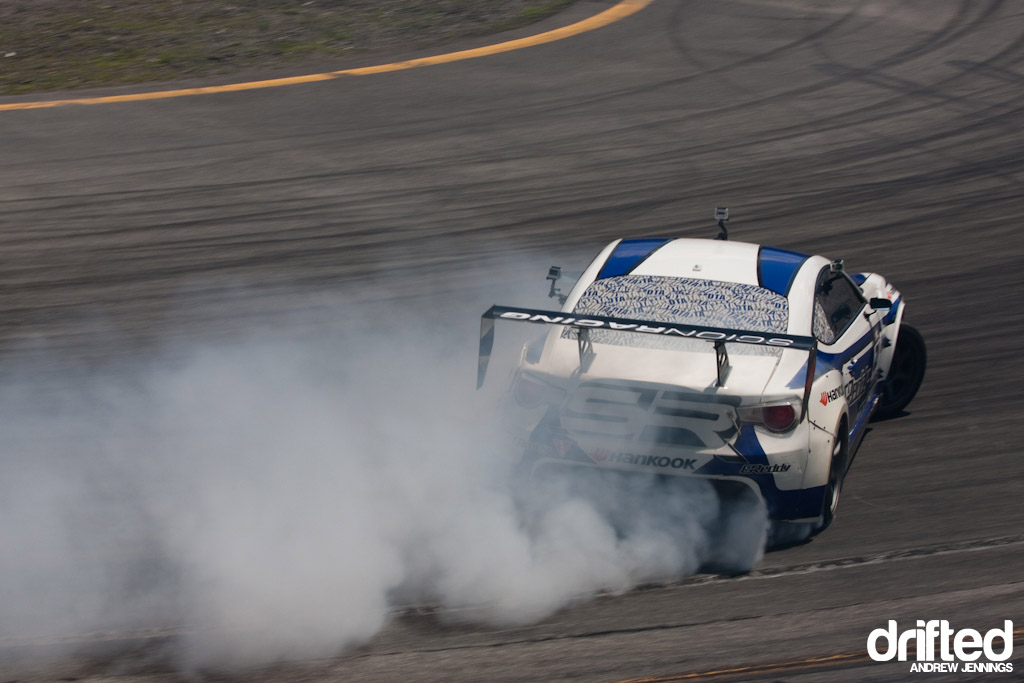 Ken Gushi was in command during the qualifying runs, never setting a tire wrong anywhere on the course in his Greddy/Scion FR-S. His speeds were not the highest however, holding back his score just a little bit to put him in 9th place for the bracket.

Last year’s winner Conrad Grunewald was showing the aggressive nature of his big Hankook Tires Camaro, getting intense angle through each section of the figure eight. With the hammer down he was able to qualify in 8th place. 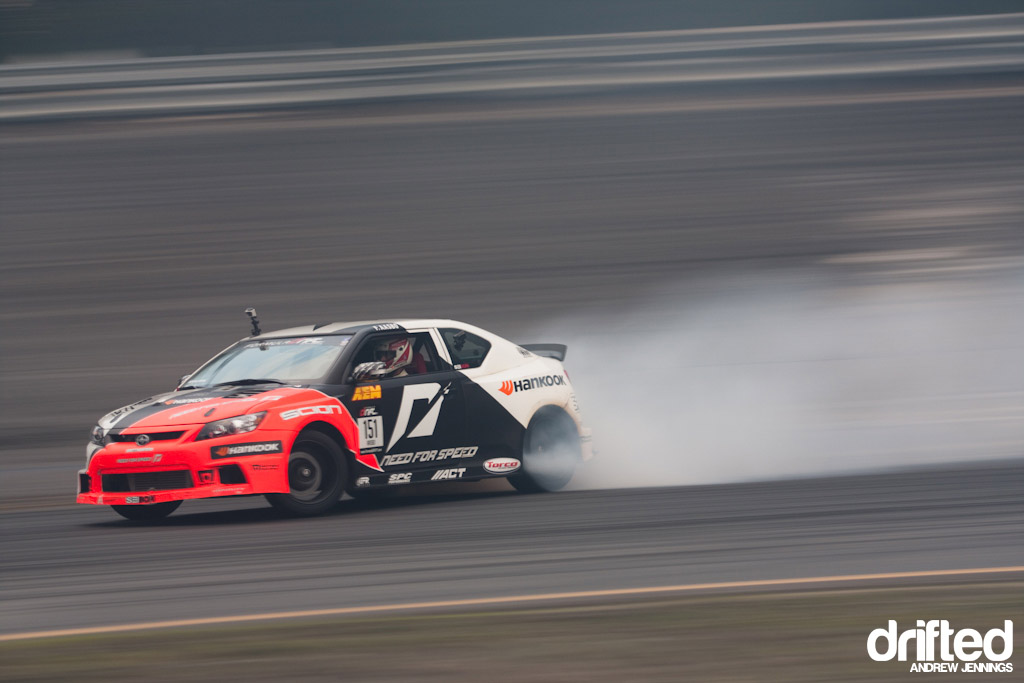 Fredric Aasbo in the Team Need for Speed Scion tC had some of the fastest speeds during qualifying, a fact that was not lost on the judges who awarded him 3rd place with a final score of 93.5.

For a time it was uncertain if anyone was going to break into 90s. The wet track had hampered most of the first runs, so as the second runs began there was a sense of drama in the air about who would find the dry line to lay down a real lap to remember. 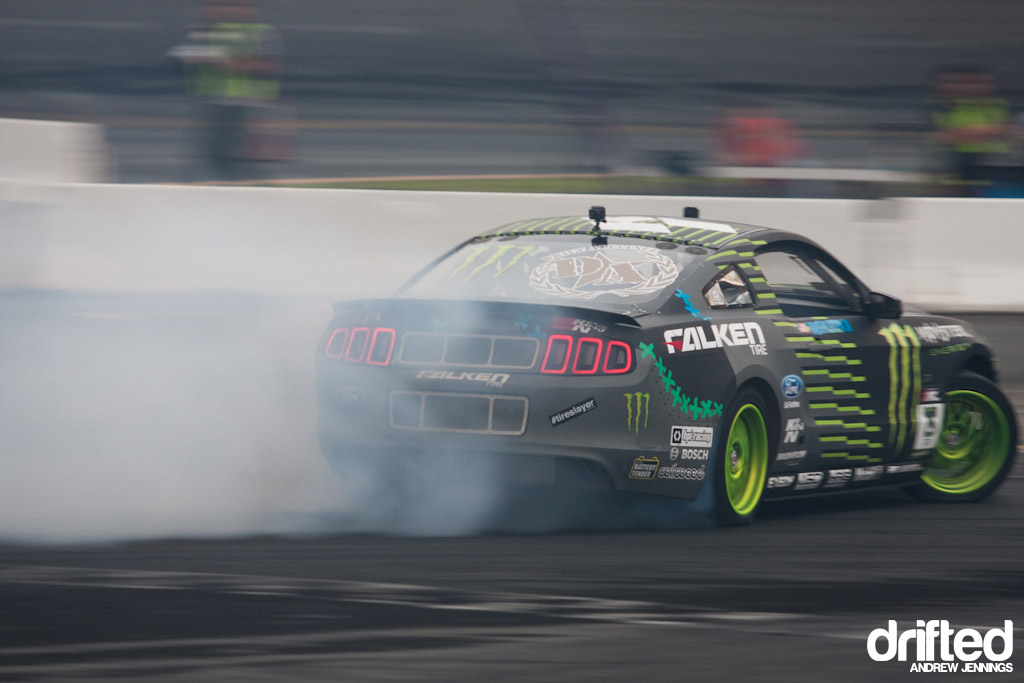 2010 Champion Vaughn Gittin Jr. was just the man to make that happen as the roar of his big V8-powered Monster Energy/Falken Ford Mustang surged through the banking and smoked around the flat sweepers. He had reason to celebrate afterwards as the judges gave him a score of 96, at the time putting him into first place in the qualifying session. Would it be enough with a handful of drivers left to run?

Underdog Aurimas “Odi” Bakchis was up to the challenge, and no one in the stadium could believe the amount of smoke that his Team M7 Japan/Nexen Tire Nissan S14 put out across the whole circuit. Even though his speeds where just a hair slower than Gittin’s, Bakchis was able to hit the line perfectly. His score of 97 would not be topped, and he qualified first for the main event, bumping Gittin down to 2nd place overall for Round 4’s bracket. 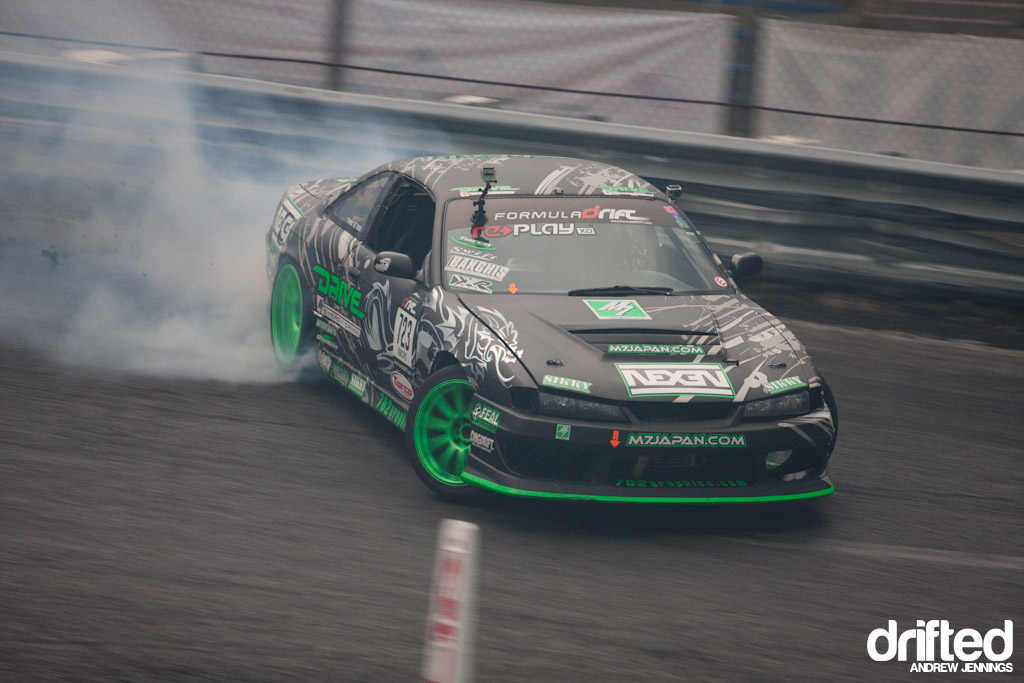 Congrats to Bakchis for taking the no. 1 spot in qualifying and earning another 12 points towards the championship fight. The 2011 Formula Drift Rookie of the Year showed that he steadily improving, and has his sights set on a podium finish.

Below are the top qualifiers from this year’s event. You can view the full top 32 qualifying results on Formula D’s blog here. Check back soon for part 2 where we’ll break down the main event and take you all the way to the final tandem battles. The season is halfway over, and you believe what happened in Jersey!

Top 10 Qualifiers for Round 4 of the 2012 Formula Drift Pro Championship from Wall, NJ: