EVENT: 2014 Nürburgring Drift Cup Round One

For the second weekend in a row I found myself traveling back to one of my favourite places in the world – the Nürburging. The Nordschleife is a track that in my opinion everyone should visit at least once, as it’s truly an amazing experience. With its sheer length and elevation changes it’s pretty much one huge rollercoaster, one that at any moment can bite absolutely anyone in the behind, even the most experienced drivers. 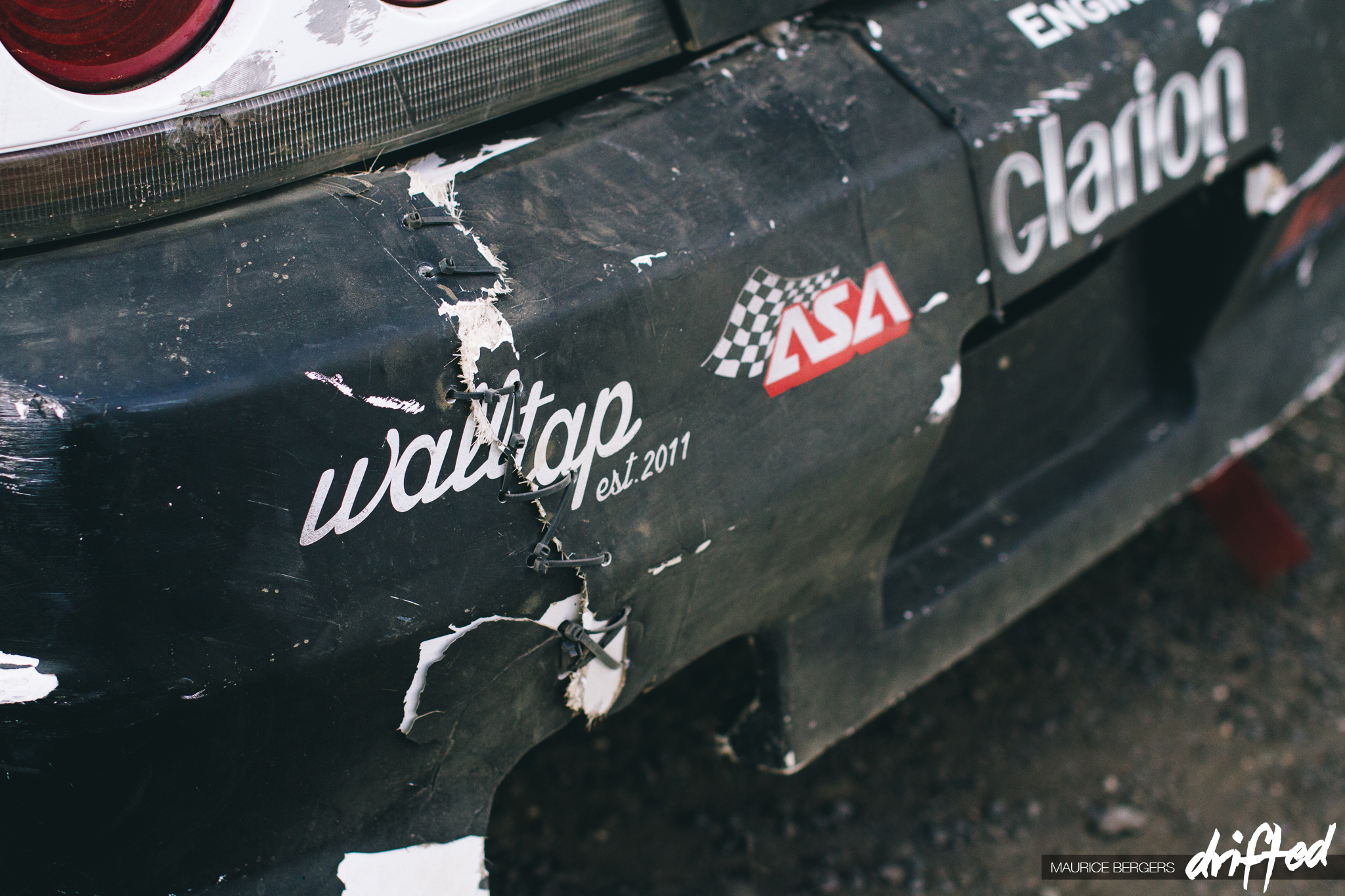 This weekend was not about the Nordschleife though, but a particular part of the GP-Strecke (the grand prix circuit of the Nürburgring) called the Mullenbachschleife. Last year I experienced my first big drift event here and, when I heard that Skylimit Events would host not one but a multiple of rounds at the Mullenbachschleife, I knew I just had to return to spend another three-day weekend photographing cars going sideways. 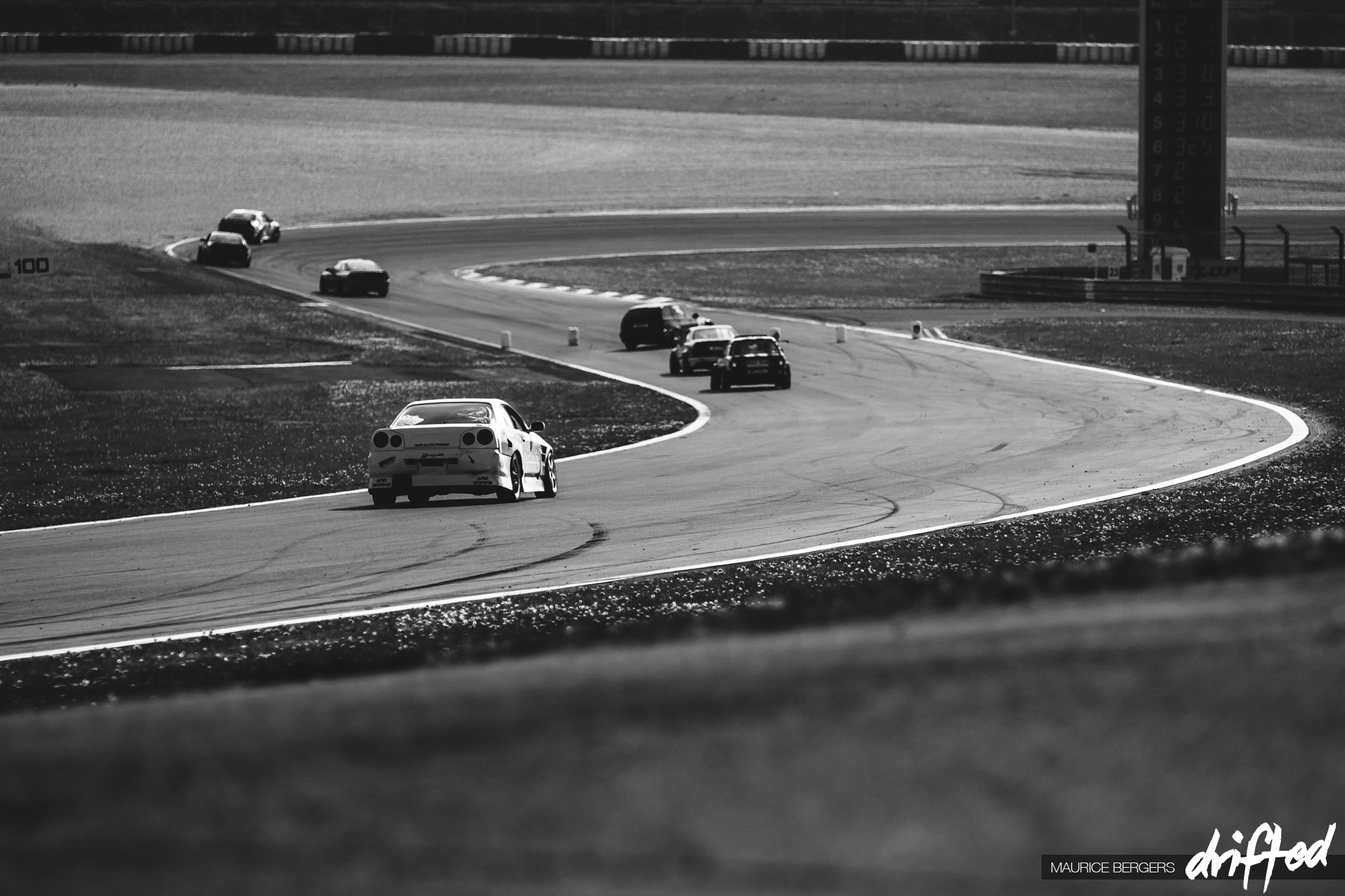 One of the big fortes of the NDC is, in my opinion, the amount of seat time all of the drivers get. Aside from the main competition there are plenty of hours of free practice planned so everyone gets to go out and have a good time.

Sure, some might lack the power to go full lock through the Schumacher S, but that didn’t stop them from trying. From professionals to amateurs, everyone went at it with full force! To me the NDC feels like a combination of a higher level drift competition and a grass roots event rolled into one. 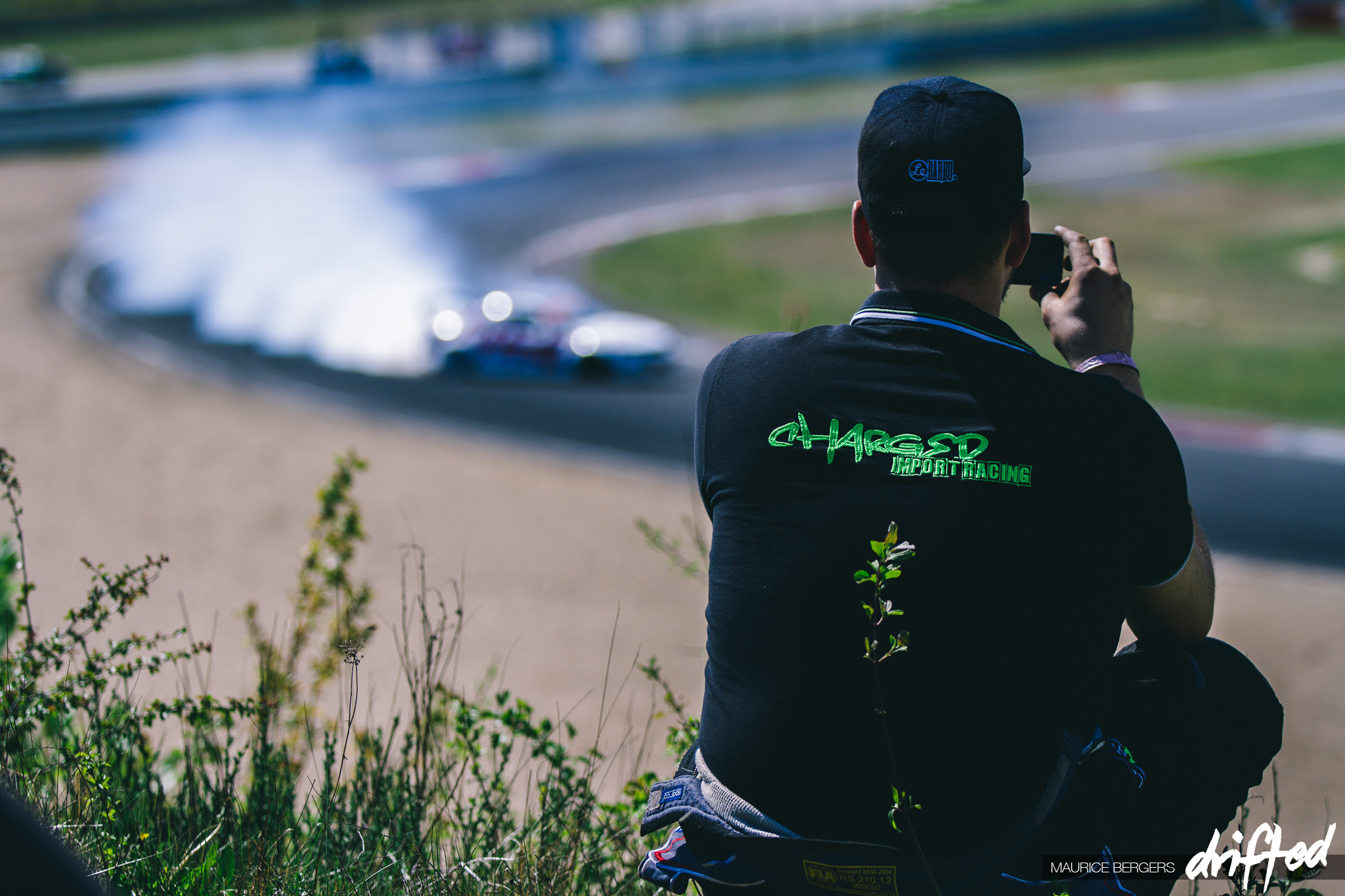 It’s all just one big happy family and it’s something I noticed last year as well. It also gives the newcomers a chance to get some feedback from the more experienced drivers or just watch and learn what lines they are taking through the corners. 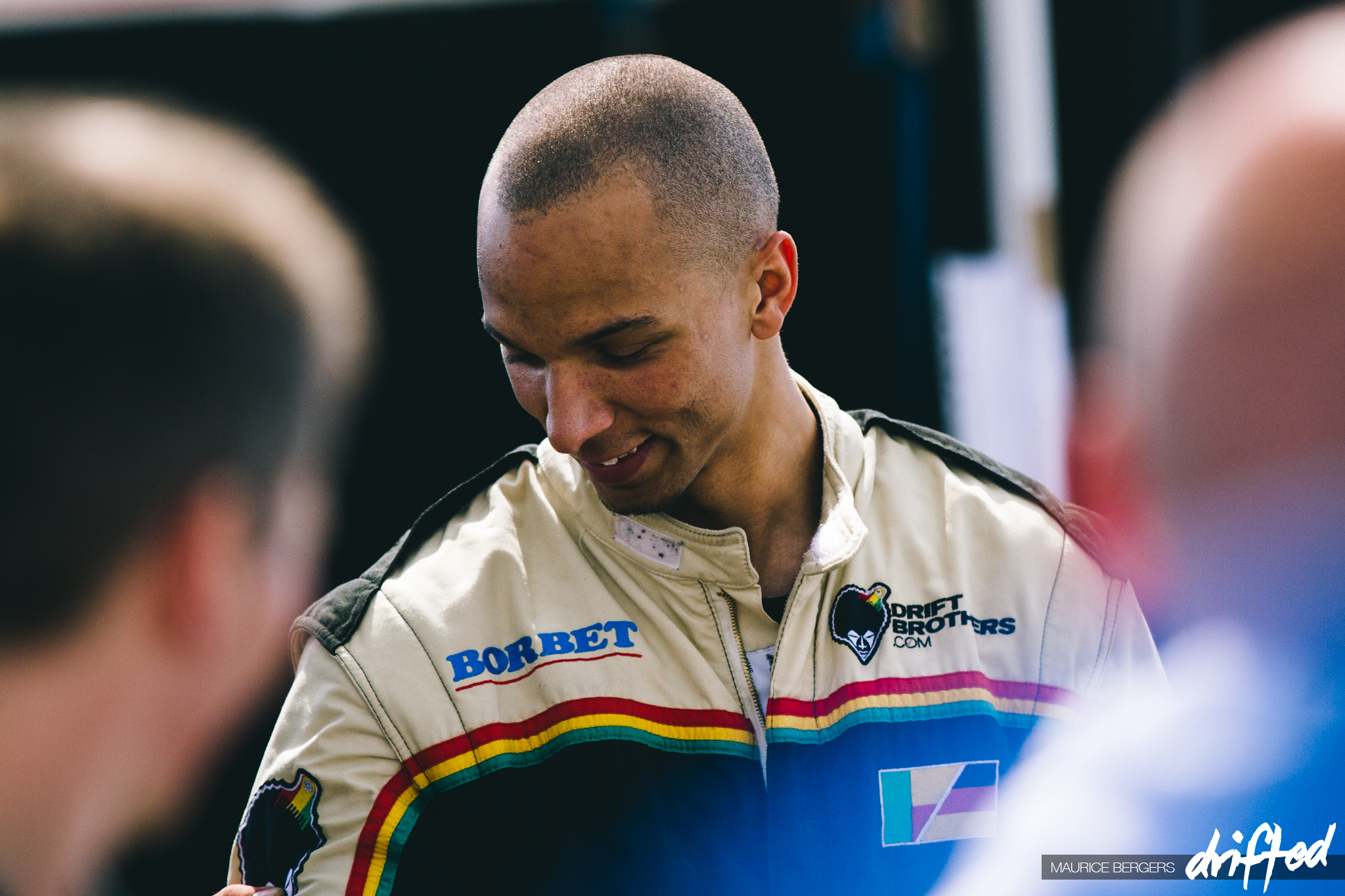 I also got to see the Driftbrothers again. It was a shame that Joe’s S13 had some engine troubles and wasn’t able to run. Eli seemed happy though, perhaps it was because he had a new toy to play with. Still a BMW E30, but this time it packed a lot more grunt than last year.

For this first round, a lot of the top drivers from last year’s edition returned to once again battle it out. Unfortunately the top two from last year, James Deane and Bartosz Stolarski, were absent. In their place we saw the return of the two Falken BMW’s, piloted by Remmo Niezen and Lars Verbraeken.

They weren’t the only team that had returned to once again try and conquer this challenging course. Take team Charged Imports for example – a full three car team ready to fight for the top honours.

If I were to name one big improvement over last year’s NDC, it has to be the weather. During the finals of last year the rain was pouring down. This year though the sun was out pretty much the whole event, which went down perfectly for the drivers, photographers, and spectators! 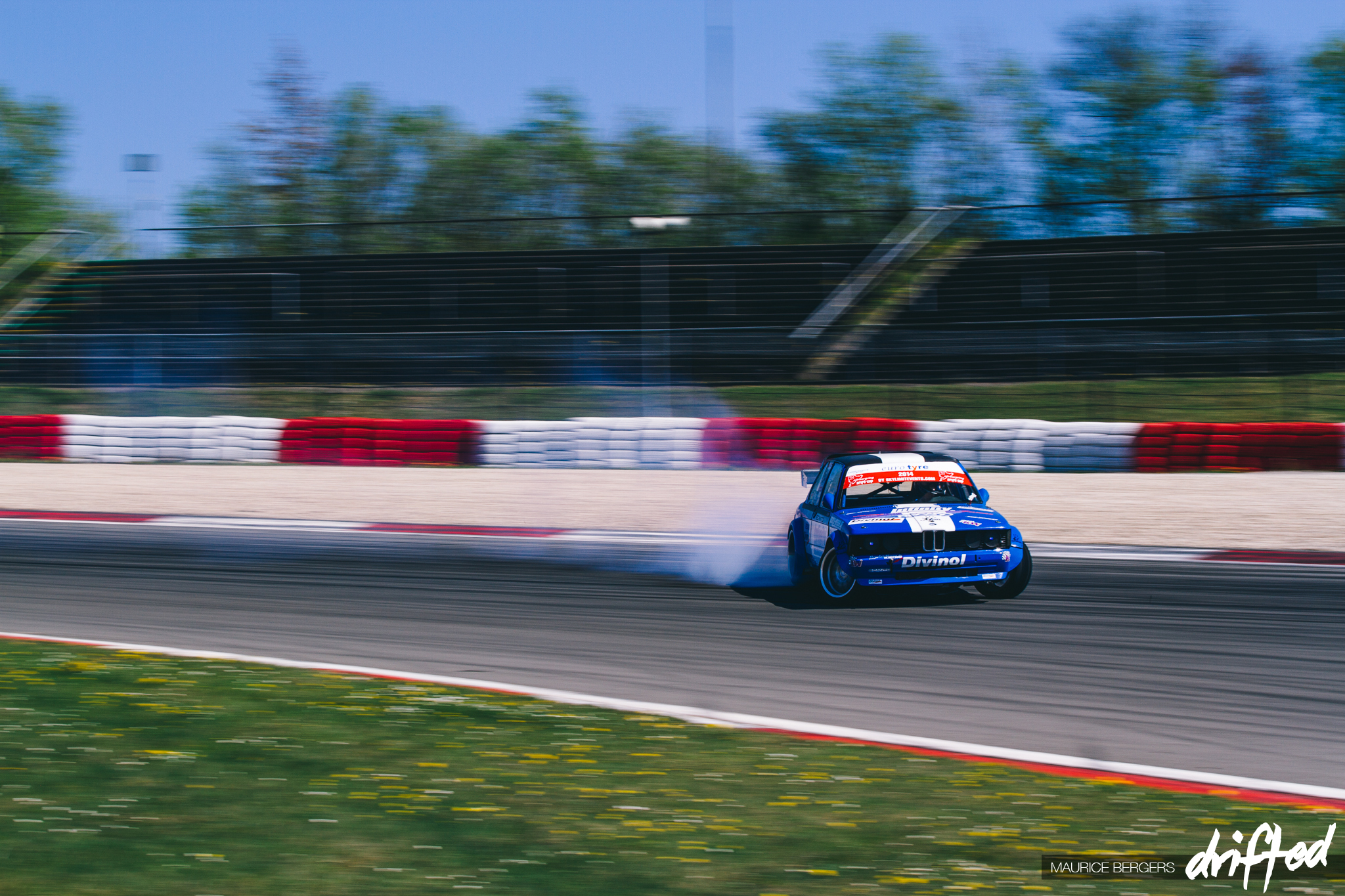 Time to get on with the competition part of this weekend. Qualifying was to take place on day two, as the first day would be used just for practice. As a photographer, this is an opportunity to scope out some of the drivers that could potentially win the event. 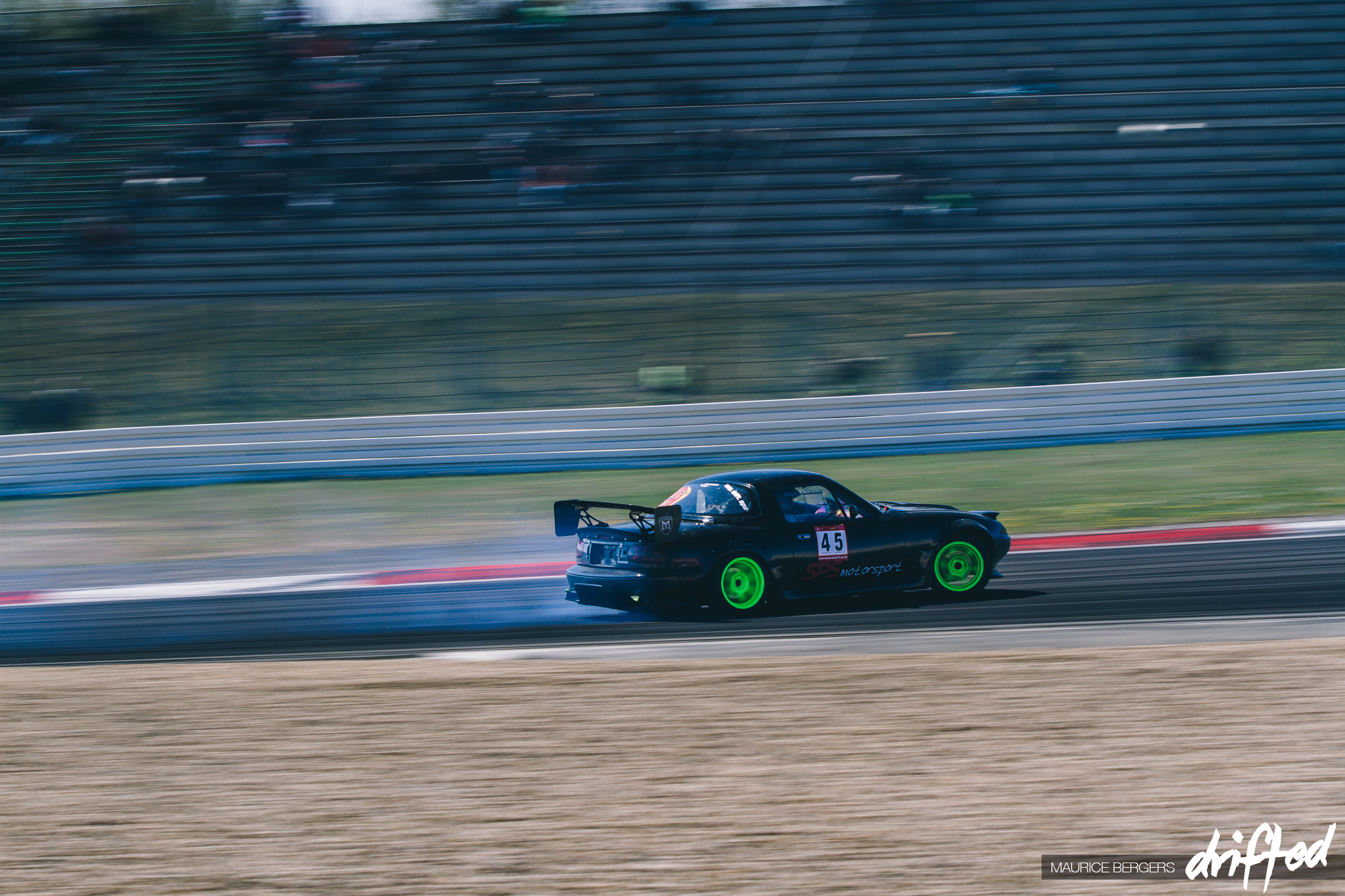 With plenty of good drivers in the competition, this wasn’t proving to be an easy decision. One person who really stood out was Dennis Köhler in his Miata. OK, so he might not be Danny George, but man could this kid drift his little Mazda!

Speaking of Danny George not being there…  someone else was present that weekend who you might know from Formula Drift. Even though he isn’t one of the drivers, Bil Baldwin has become pretty famous. Probably the most famous marshall in the world? A very kindhearted man, and it was an honour to meet him.

Back to the action. On day three it would be time for what is considered the most exciting thing in drifting: the tandem battles. Seeing one car go sideways and producing a load of smoke is impressive, but seeing two in close proximity always adds a load of excitement.

The finals were divided into three groups, based on their qualifying score. This system seems to work well, mainly because this way you start out battling people that had a similar score. At the same time it still allows the top drivers to fight their way back to the top spots, even if they had a less than optimal run during qualifying.

Moving closer to the finals it was clear that there were a few clear favourites who could probably take the win. One of those drivers was Markus Müller in his, dare I say, sexy JZ-powered E46. I spoke to Markus after the event, and he was kind enough to provide me with a short write-up of how he spent his weekend at the NDC. What follows now is his story of the final day:

“Easter-Monday, battle time. In the morning again were training seasons for the single groups. As I miscalculated a bit with the tyres I wasn’t able to do much training on that day. So I only went out for two or three laps to get used to the tires and a final check of the car. Everything was fine so I spent the rest of the morning on the grandstand studying my possible opponents as they were practicing.

At 2:45pm the battles started. As I qualified 4th, I was in the A finals which meant I already made it to the Top 16. The first battle was against Gerrit-Jan Toonen in an Opel Manta with a BMW M3 engine. We both made some mistakes in our first battle. I was a bit annoyed with myself because I knew the reason for the mistakes were the lack of seat time on that day. Luckily the two laps were enough for me to get fully comfortable with track and the car again. So I won the one-more-time.

Top 8 was against Kevin Corsius in his mighty yellow E36 M3. I knew Kevin was good so I was prepared for a tough battle. And again we needed a one-more-time. I completely underestimated how fast his M3 was. In our OMT Kevin went off track so I got the win.

My top 4 battle was against Benoit Magoules. I never before drove against him so I just went flat out in my lead run. The run was pretty solid. Benoit used a shallower line in the entry of ‘klein Monaco’ so the judges saw an advantage for me. In the chase run I copied his line perfectly and kept very close proximity on him and I managed to win again. I couldn’t believe it I was in the final!

Final against Rene ‘The Shredder’ Portz. As I was the higher qualifier I lead first. I know Rene is very experienced driver so I knew I had to give all. I did and drove a good lead run. Rene however made a big mistake behind me going off track. Now I knew if I don´t make any big mistakes in my chase I would win this. I tried not to think about it as I chased. He pulled a bit of a gap to me through the ‘Schumacher-S’ but into the ‘klein-Monaco’ I was back on him and kept that proximity. We drove back to the start line and we both literally knew the result. But at that point the judges hadn’t yet revealed the result. They wanted to wait until the trophy ceremony. I was so extremely happy about this totally unexpected outcome that I nearly couldn’t hold back until they officially announced the result.

The icing on the cake for me was to get trophy presented by the bearded man of drifting Bil Baldwin, who came all the way from the US and was invited by Andy Jaenen, the man who organised this great event. All in all it was a perfect event with the perfect end for me.” 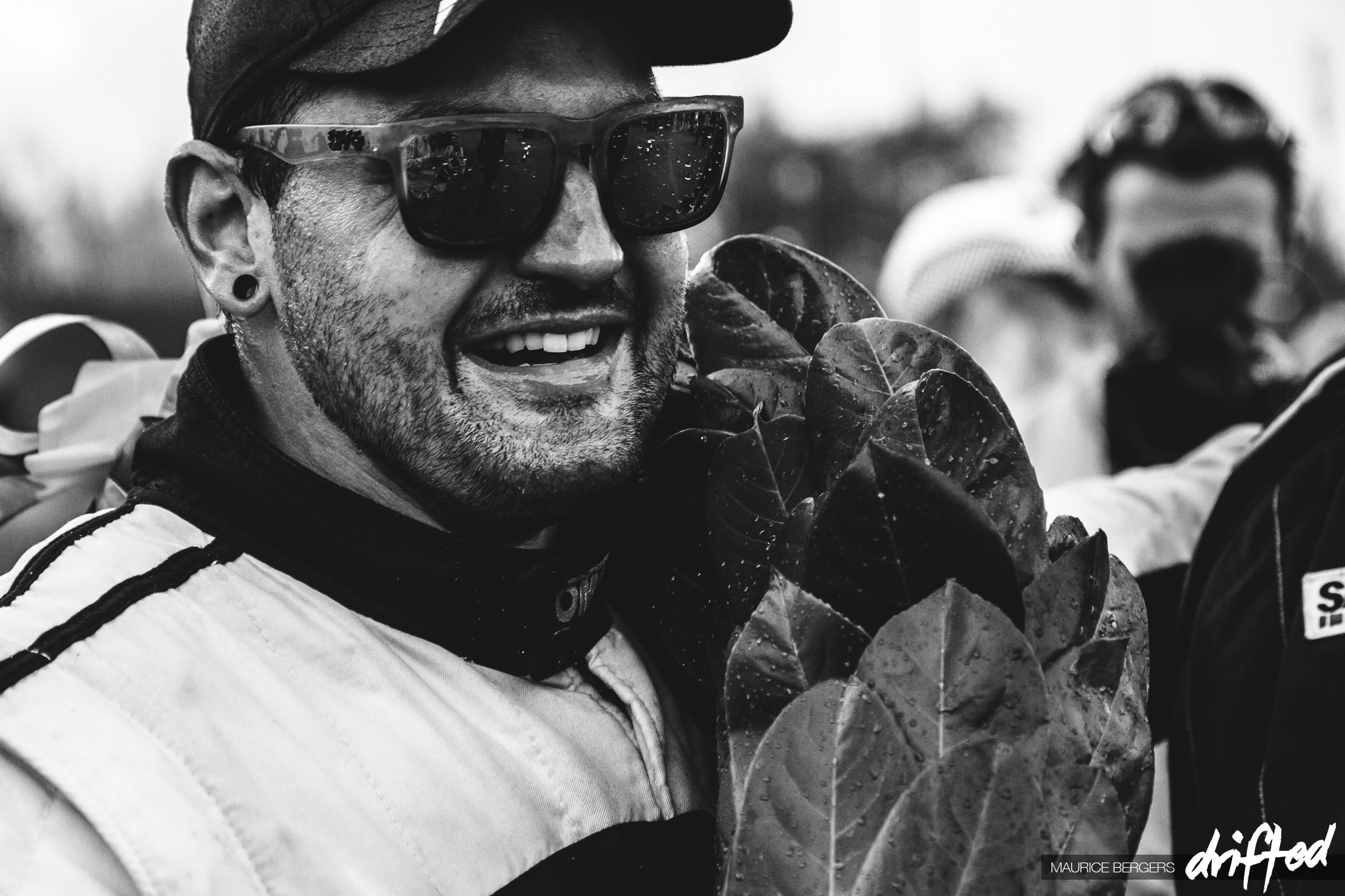 The next round of the NDC is the 22nd-24th of August, but with a different track layout. Will Markus be able to defend his lead position in the Cup, or will one of the other drivers be able to score enough points to take the top spot? I for one can’t wait to find out!