First off I would like to point out that if you did not attend the event in person you missed out on some of the best drifting ever in the UK. The BDC staff had arranged a nice laid back event, laid out a course that the drivers loved, and in return the drivers put on an epic show.

Saturday started off with Team Launch getting their S13 up and running again after needing a new head gasket. Overnight parts from Swindon, a few hours hard work and they were ready to go out and decimate all.

I had to have a go at doing some in-car shots. They came out well, but I came out feeling a little sick.

It was a long day for all involved, it was meant to finish at 9pm, but we ran over a little, the drifting eventually finishing at just before 11pm. It looked awesome under the floodlights. It would be great if we could have more events under the lights, Formula D style, but noise restrictions and track curfews put a stop to this.

There were a lot of close intense battles. The cars had been out to practice on Friday, so they had all had a bit of practice twinning and triple drifting. 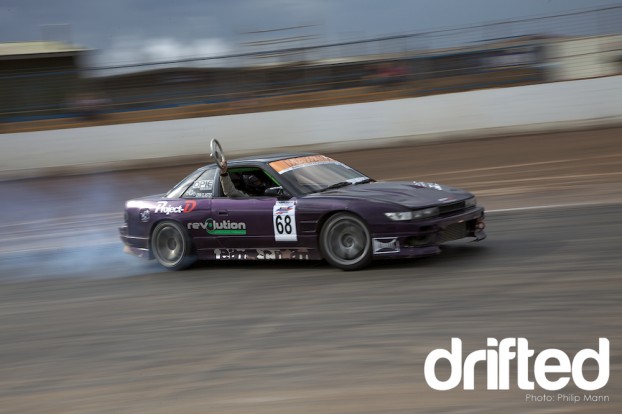 The drivers had been told in the drivers briefing to make sure that they put on a good show for the crowd. Some went further than others. A few drivers held flags out of their windows, but Steve Whitbread of Team Mint waved a bra out of his window. Ashley Stevens and John Glaister of Team Scream also put on a good show, Ashley holding out a false leg and John holding out a steering wheel. 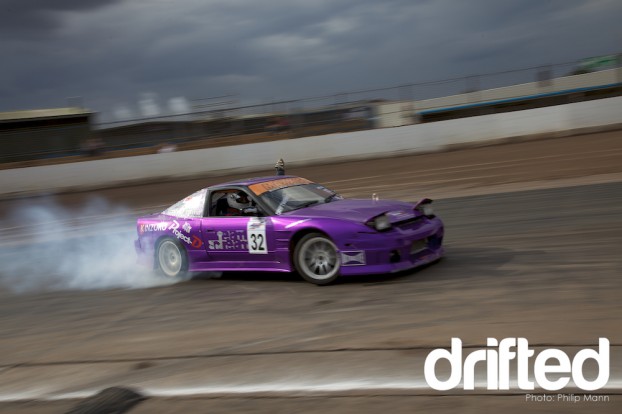 Carrying on from his good form at Donny, Paul Smith had been putting in some fantastic runs. Good enough in fact to be the top qualifier. 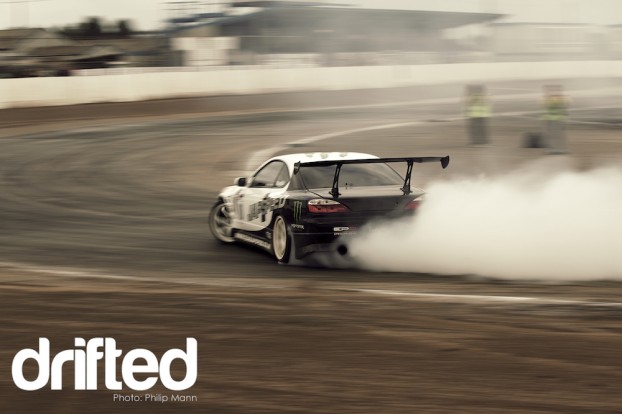 As it was an open competition there was no classes, every man (and woman) for themselves. The results sheet was quite good to look at, with quite a few semi-pros out qualifying the pros. Semi-Pro points leader Ian Phillips qualified alongside Pro drivers Julie Robinson and Wayne Keeber all managing to get into the top 10. 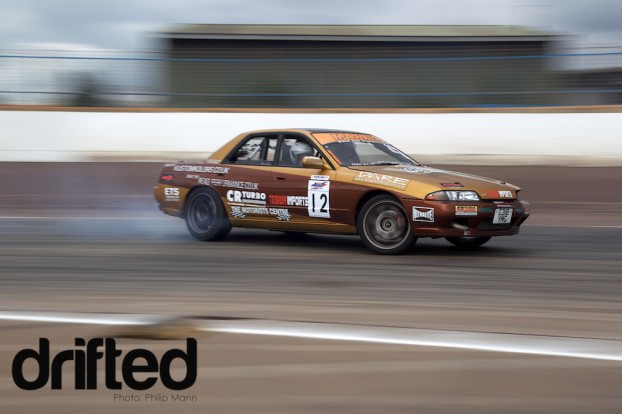 Simon Perry had managed to get his car fixed after Friday’s Skyline Owners sandwich. He managed to put down a 84pt run to put him in second.

It had been dry all day but being British summer time it did not stay like that. Practice and qualifying had been dry, but the heavens opened for a few minutes after qualifying had finished. This meant that the drivers who were out first for the twin battles had to drift on a super slick track. I know the drivers liked Norfolk because of the tight technical track, meaning an underpowered car could still play with the powerful boys. But the rain meant that the drivers had to drift the track at about a 10th of the speed they had been doing an hour before due to the rainwater sitting on a day-and-a-half’s laid rubber.

As we started the Top 32 the track was like a skating rink because of the rain. The first few battles were difficult for the drivers, and looked very slow from the outside. 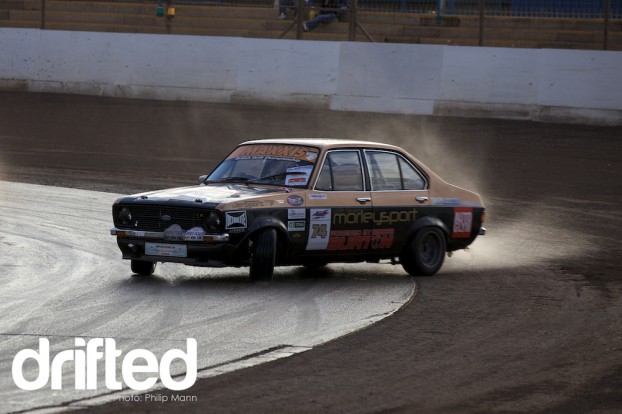 Ben Morley who had spent most of the day smoking the whole track was still getting good angle in his battle against Damo Barret, but looked like he was at a walking pace compared to his morning runs. 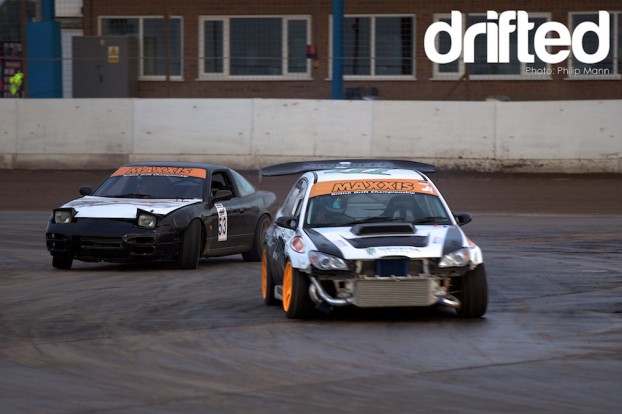 And there were one or two upsets in the Top 32. Stuart Hansford who was not driving in this years BDC had his first battle against Baggsy. Stuart got a 7-3 advantage in the first run, but a spin from Baggsy in the second meant Stuart was into the top 16.

In an all Semi-Pro battle, John Glaister went on to knock Mark Lappage out with a couple of close runs.

Wayne Keeber also had some close runs with Ashley Stevens. 5-5 in the first, but Wayne just lost out with a 6-4 to Ashley in the second. Darren the start-line marshal told us that he could hear Ashley’s mum screaming in support over the sound of the cars. I’m sure the only thing louder than her was the air horns.

We also had a Team Japspeed pairing in the top 32 of Anthony “Google me” Cahill and Nathan Chivers. A spin from Ant in the first run gave Nathan a 10-0 advantage into the second run. Ant drove well in the second run, but his 6-4 was not enough to go through.

After getting knocked out of the running Anthony decided to have a go at commentating, Japanese style. You will have to make sure that you make it to a future BDC round and see if we can get a repeat performance out of this man, one of the funniest things i have ever had the pleasure of witnessing. 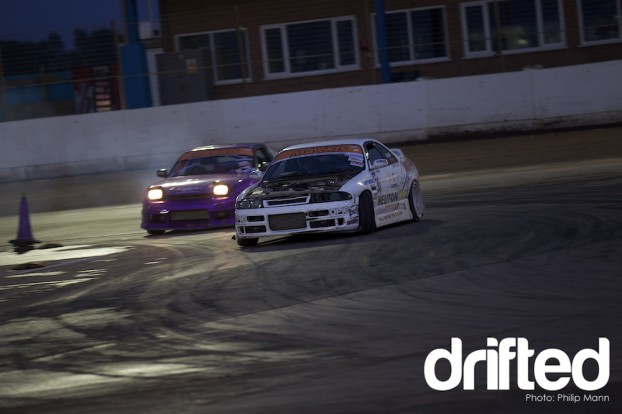 The track had dried up a bit buy the time we got to the Top 16. And out of the 8 battles we would see, 3 of them would have to run One More Time (OMT).

Before going out for the Top 16 Ashley was saying that he wanted to get so close to Ian he would leave tire marks down the side of his car. He never did get that close, but the 1st 2 runs were scored 5-5. It was looking like they were going to be close as they went OMT, but a spin from Ian in the first run gave Ashley an advantage that was too big to overcome in the second run.

The two remaining Japspeed drivers would both have OMT runs in the Top 16.

Nathan had to go up against Team Falken/Green’s Polo ( Paul Cheshire). In the first two runs both drivers had a spin each. But when they run OMT Polo put in two good clean runs, 8-2 in the first and 6-4 in the second.

The Battle between Stuart Hansford and Paul Smith started the same as Nathan and Polo’s battle, both drivers having a spin each. The first OMT run went 6-4 to Stuart. Paul had a much stronger run in the second to get a 7-3 win and move onto the Quarter finals.

As we move into the Quarter finals the competition started getting getting hot and looking great under Norfolk Arena’s floodlights. 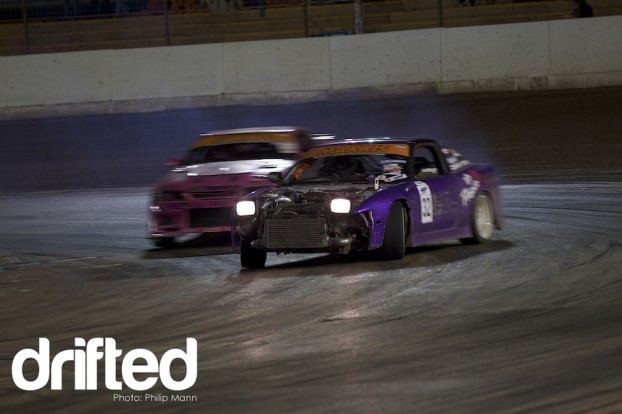 Ashley Stevens was up against Simon Perry’s big pink R33 Skyline. Simon had a good first run, but Ashley was slightly better and went into the second run with a 6-4. But he pushed too hard in the second run and spun. Simon moved onto the Semi Finals.

I would say the next battle had some of the best drifting i have ever seen. It was between teammates Paul Cheshire and Matt Carter from Team Falken/Green. When was the last time you saw a driver get so close he could almost touch the wing mirror of the other car? 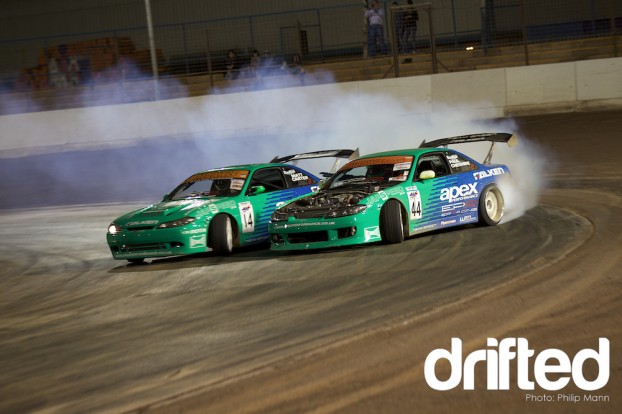 Ben Morley was up against Team Mint Tires Steve Whitbread. After a spin from each driver it went OMT, and it was the mighty Escort that went onto the Semi Finals. 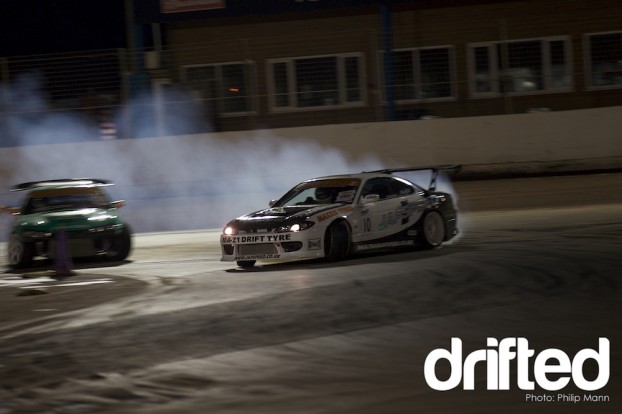 Paul Smith of Team Japspeed was up against the other Team Falken/Green driver, Alan Green. Paul put on a couple of cracking runs,filling the arena with smoke. his 10-0 and 4-6 against Alan put him through to the semi finals.

The mighty Escort was facing off against the big pink skyline. The first 2 runs between the pair were scored 5-5, so they had to run OMT. Simon’s car looked fantastic with huge flames coming out the exhaust. But it was Ben that would be going onto the final with a 7-3 in the first run and a 4-6 in the second. 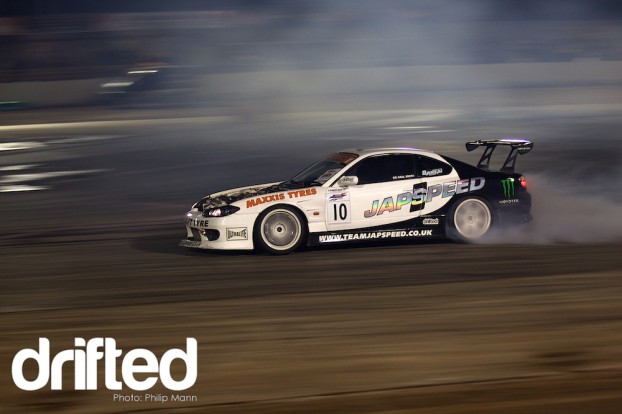 Paul was up next against Matt. It was Matt who got the slight advantage in the first run with a 6-4. The second run looked close, both drivers putting on good clean runs, and the equal score of 5-5 reflected this.

It was Matt going on to face Ben in the final, and Paul facing Simon in the 3rd place battle.

It was 2 very smoky Nissans that would be battling for 3rd place. In the first run Paul “Smokey” Smith took the advantage, then in the second run the advantage swung the other way. It was just after 10.30pm and we would have to see these two run OMT. The OMT was close, but Perry got a 6-4 advantage in the first run, and Paul could not make it swing back the other way in the second run.

It was getting really late now after a mammoth Top 32, but we still had the final to run.

It was Ben Morley up against Matt Carter. Both drivers were giving it everything. But Matt’s driving whether leading or following was just slightly better than Ben’s. 2 Runs of 6-4 to Matt gave him the win.

A big thank you has to go out the the BDC and Norfolk Arena staff for putting on such a good show, and all the drivers for the best drifting I have ever seen.

Keep checking back for my report from the Sunday’s Team Drift event.