EVENT: Diemax Drift Challenge Round One – Where To Start? 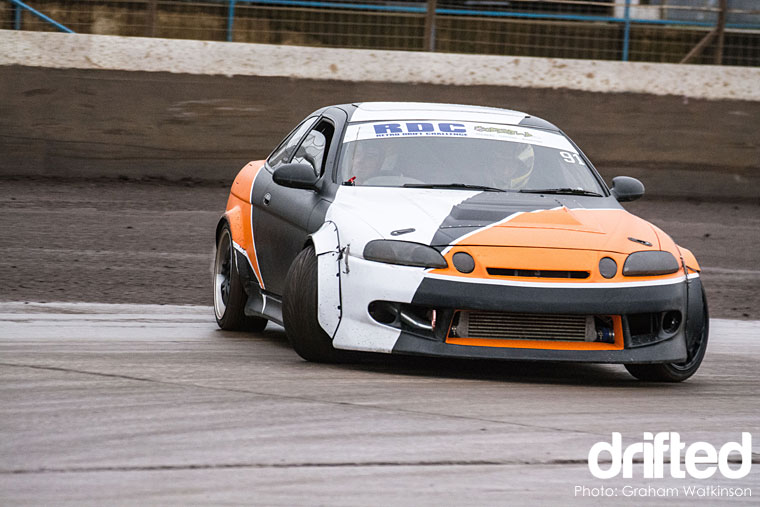 Hiding away amongst the flatlands of East Anglia lies the Adrian Flux Arena, a stalwart of motorsport for well over sixty years.

Bringing the world of oval racing to the masses on a regular basis. It is the home to popular formulas as Brisca, Ministocks, saloons and all varieties of banger racing. Not only a homebase to the four wheeled but an institution to the two wheeled too. It always seemed a natural progression that drifting took its place here alongside the current guests.

For the past twelve years, on a regular basis, drifters take to the concrete infill to hone their skills and face their fears, and with the evolution of the sport gathering speed it was only a matter of time that a challenge series came to Norfolk. Let us not forget where the organisers have set their targets on supporting the novice drifter. It was always directed at the grass root driver, a careful secure and well managed track aimed solely at the part time driver who’s ride was built on a budget but never cutting corners, no pun intended.

The management has told me it was always the aim to bring grass root drifting to the track and to coach and teach the drivers in a safe environment. So far for the last twelve years they have done indeed that. So much so that over the years three professional championships have used the facilities. 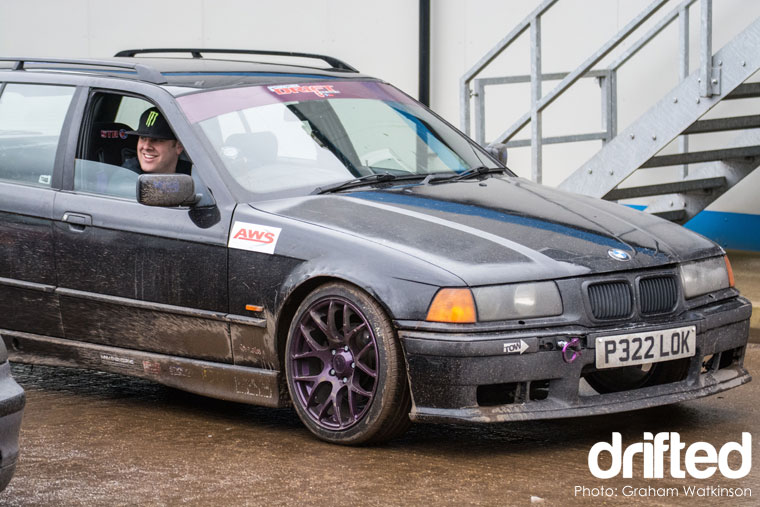 A testament to the vision and knowledge they have brought to the sport here in the east. With that being said, a close business relationship with an engineering company who over the years have supported their own race team, decided to forge a plan to bring a challenge series to the arena and so the Diemax Drift Challenge was born. Open to the grass root drifters it was aimed to provide not only a competitive day but also pave the way to all wanting to step up to the more professional drift series. 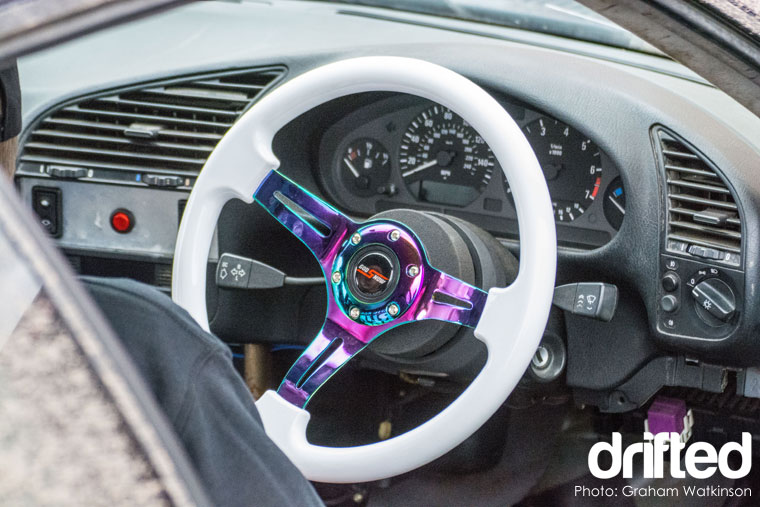 It was directed at all who are not currently competing in the major series around the UK. The day saw over fifty drivers from around the region compete for trophies and prize money donated by local sponsors and to gather points for the title of Diemax champion later in the year. The challenge consists of three rounds each of which will have a separate winner but also lead to points. 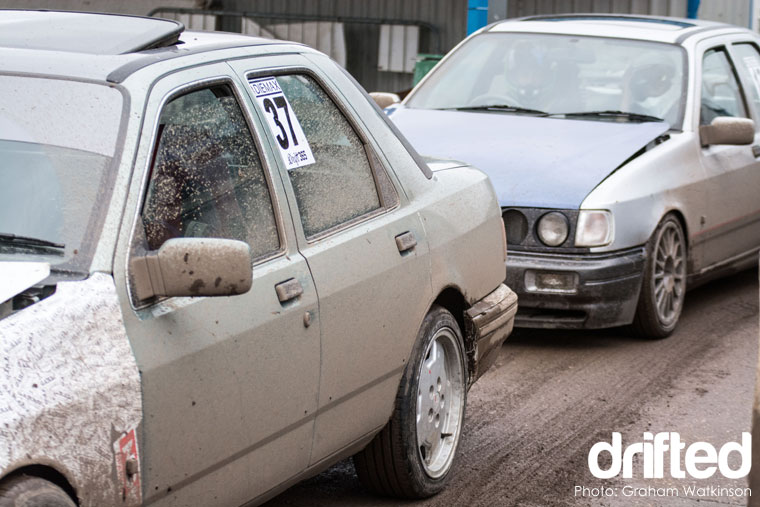 So, round one. A cold and wet day in February set the scene for the day of competitive drifting. The day was roughly set out like most competitive drift days, practice, qualification and then the battles. First the day started out with the briefing this brings the requirements of the competition to the drivers, track layout, clipping points, scoring system and most importantly the health and safety aspects of the stadium. It always seemed a dull point to prove but we all know that motorsport is dangerous, unpredictable and downright full-on edge of the seat type stuff. 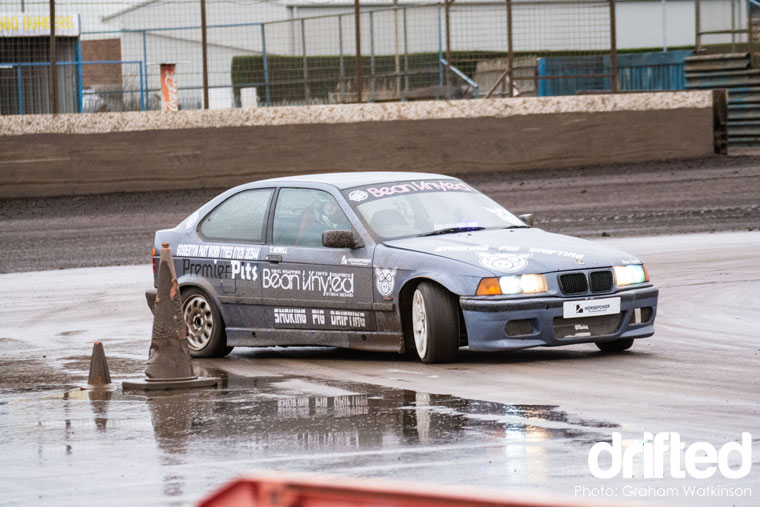 So, let’s set the scene, a concrete infill to a shale track, oval in shape and vast. This pretty much set the layout of the track, a simple one and half lap crossover circuit including five clipping points and the “bonus ball”. The track was designed to be simple yet challenging, drive-able yet testing.

A series of clips both front and rear in order for the driver to push his/her limits and to get out of their comfort zone. Practice makes perfect and it’s quite simple here. Two cars two runs a lead and a chase for both the drivers. The very simple start, drift, finish, repeat.

As the morning progressed the conditions start to change, wet becomes dry, silence becomes loud and uncertainty becomes confidence. We all look at the professional drifters of the UK but the world and we understand they must have started somewhere. Some of these drivers did actually that. I have to admit the layout is not the wide-open corners of some of the competitive tracks, this is a tight compact circuit that can catch out even the most serious of drifters. 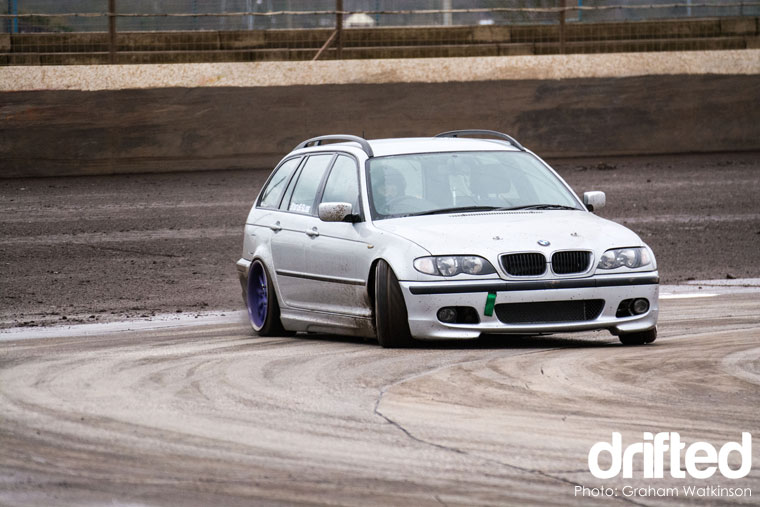 Practice continues with certain drivers adapting well to the patchy track conditions but all were pushing themselves. Qualification time comes around after a small break, allowing the track and clipping points to be redressed, but the weather fights back with what ended to be a shower that pretty much lasted the day. The decision to delay the start of qualification so an even playing field is for everyone.

The actual qualification follows a different path for this series. A tried, tested and perfected marking system based in experience but suited to the grass root drifter. The accent on pushing the drivers limits but rewarding them for trying, a spin doesn’t equal a zero for the run just that part of the course and the clip point it relates to. If it’s a half-hearted spin then not only do they not gain points for the clip you receive a deduction in style points. 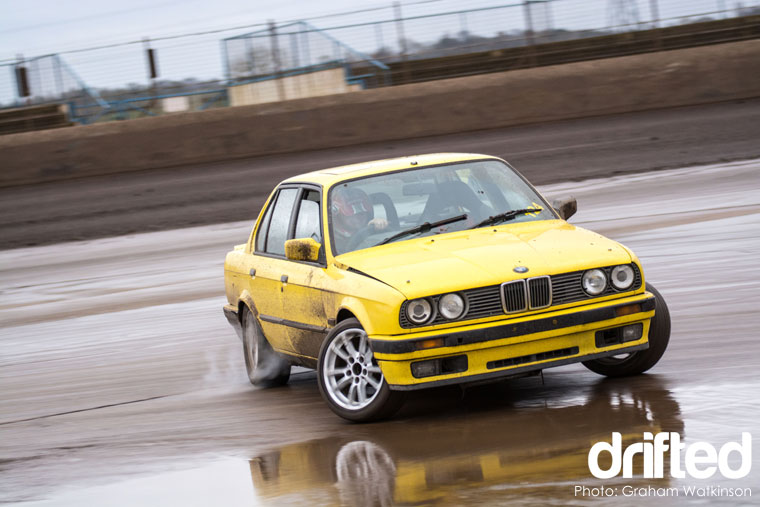 If however we can see and hear that the driver is on full attack then some style points are awarded, so in the event of a points tie for the top thirty two, style points are the decider drivers also twin qualify with the lead in control of the track, chase at least three car lengths behind. 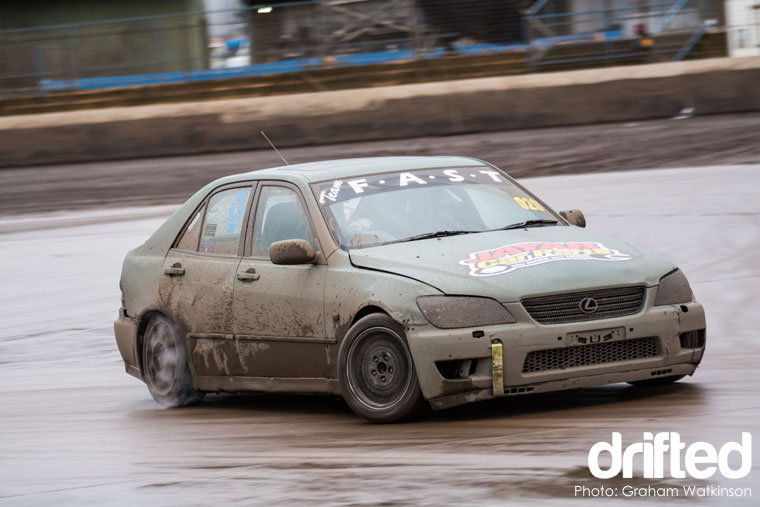 Higher percentage points are scored on the lead run then totally unlike the professional series if the lead driver spins the chase car stops and when they are both ready they continue the lap, hence the practice session is advised to twin with a friend or equal. The major difference is that once qualifying is over the cars outside the top thirty two have a further allotted time to practice. These unique rulings and scoring system were designed so the individual could get maximum seat time whether or not they qualify giving the sense of value for money. 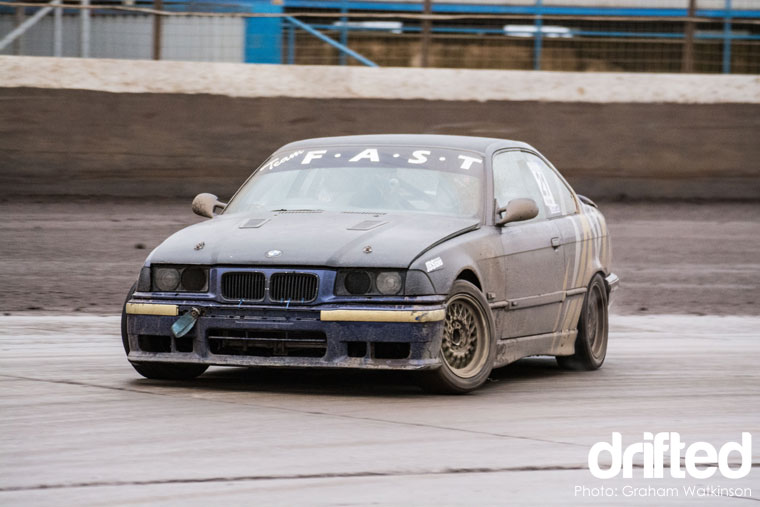 As the day progresses the tried and tested format of eliminations continues amidst the rain soaked track. This mixed with the Norfolk spirit pushes the drivers on and we get down to our last four. The final battles like all competitions set the order for the winners and runners up, first and second, third and fourth. 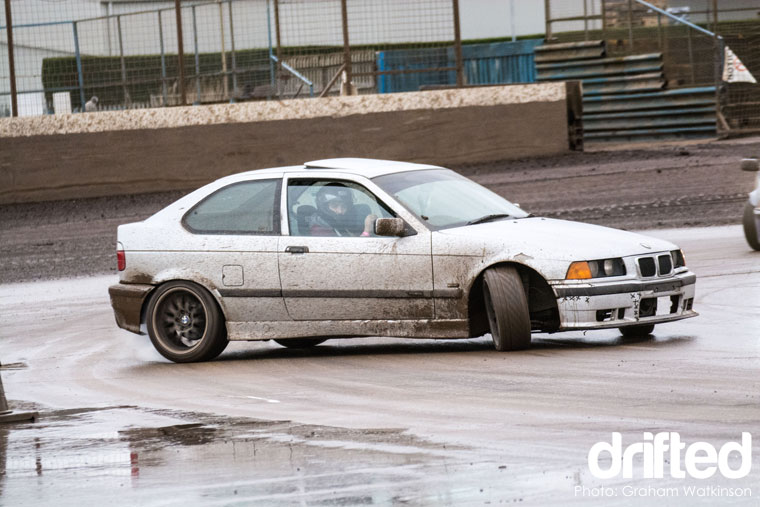 The top four were made up of two Norfolk regulars and two newcomers. As the light fades the brilliance of the halogen spots illuminate the circuit. Runs are made, lead and chase and decisions are made. That fateful “the judges have a decision” announcement comes over the loudspeakers. So, after a day of rain, sun, dry and wet we get to see our final four at the podium. 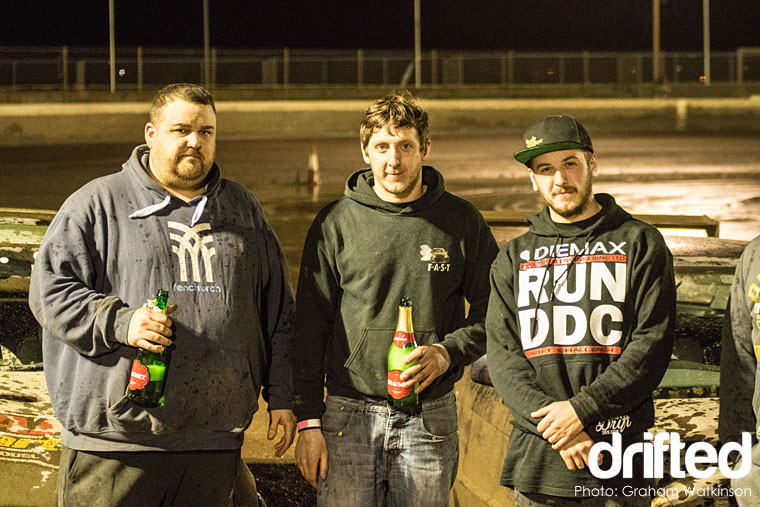 As the champagne spray settles we recognise the hard work and determination of the drivers and staff. It may be corny but all are winners here, if anything positive is taken from this day it’s the sport itself, for without the try-ers and do-ers of the grass root scene where would the professional circuit be. For without those battle-hardened warriors of the track what does drifting hold for the future?

Where to start, how about right here: https://drift365blog.com/