In Part I we took a closer look on the Street Class results and the racetrack, for Part II my focus will be on the Pro Class results.

Even the streets around the Nürburgring are like heaven, especially in the morning, when no one is around

Loud and fast: Although some technical problems, the Chaser was performing good at the fast track. 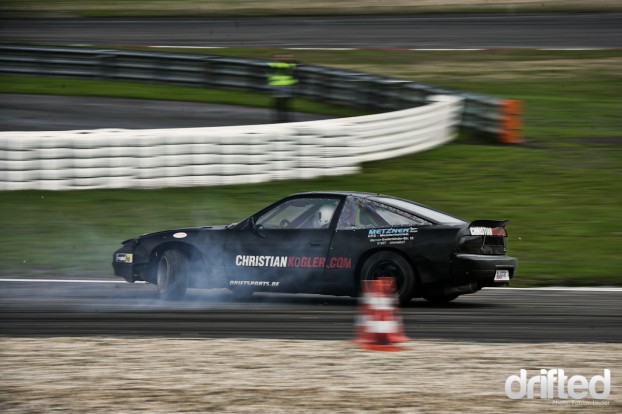 Christian Kögler, one of the favorites, was trying hard to do a backward entry, during the many attempts he killed his gearbox sadly.

So he took the gearbox out and tried to fix it, due to rain they had to move inside the toilet block!

After five hours the ’79  four speed  BMW gearbox had one gear less (3rd) and by saturday his car was runing again.

After the “professional” repair, the BMW hearted S13 was rocking on the track, even without the third gear. 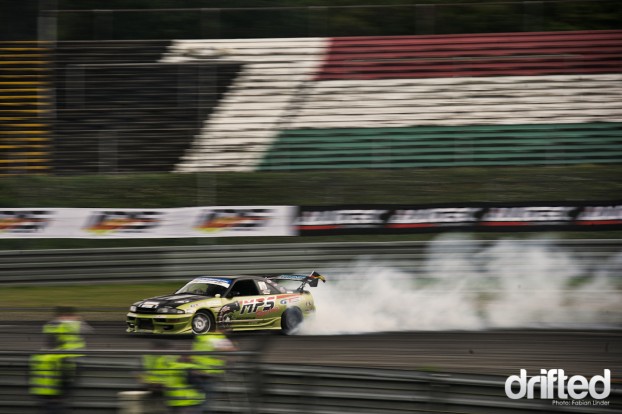 Team MPS Engineering driver Rene Portz showed what his R33 is capable of.

During Round 5 Rene got his new nickname: “The Shredder” – no driver wrecks as many bodykits as him. 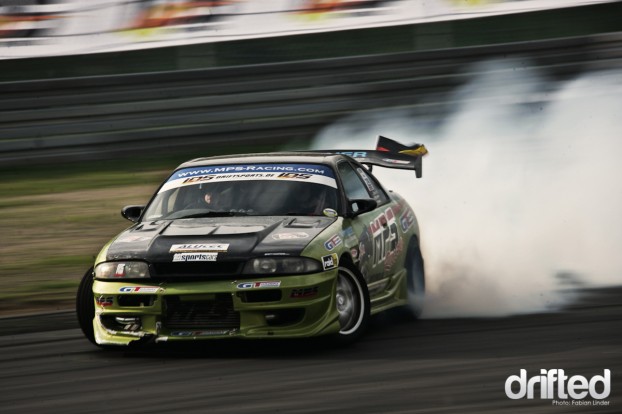 Team MPS Engineering are the spare part supplier for all of the Nissan drivers in the IDS. When the mechanics arrived on Saturday they brought a complete bus full of spare parts for the broken Nissans.

Philipp Stegemann – co-founder of MPS engineering, is temporarily working on the rebuild of his RB26 S13, which will debut during the European Championship back at the ‘Ring in September.

Andrew Hirschy, driver at Speed Industries, was deeply impressed by the size of the Nürburgring, it´s buildings and the rollercoaster.

Andrew’s S14 performed well, but he thinks about getting a new project, his S14 is very abused by the many twin battles.

Another suisse, another S14A: After his third place at JDM Allstars in France, “Dirtdrop Phil” wanted to gain some more points in the IDS 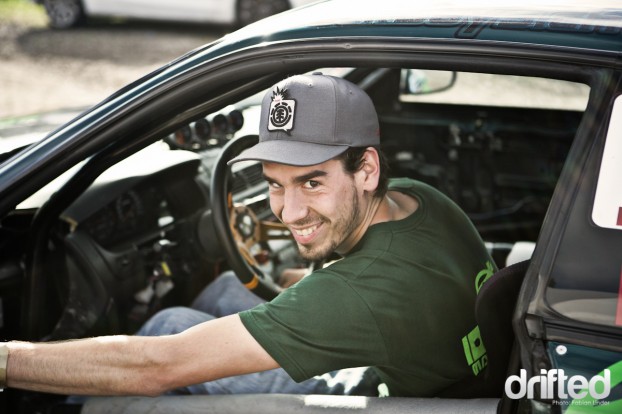 Philippe Guillod drifts for fun, not for points or prizes. When his  “one-eyed bandit” (not a euphemism)  is running, no one can stop him from having fun. 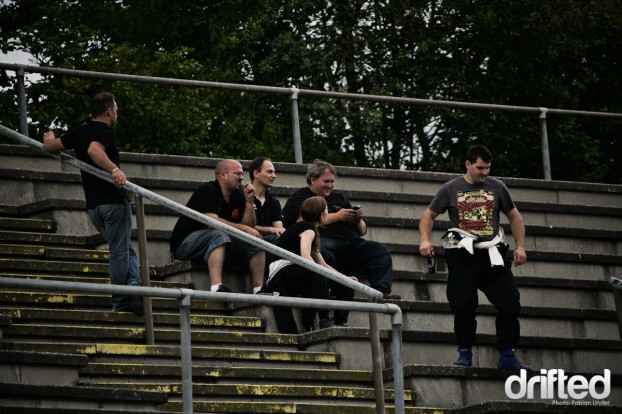 The other judge, Faruk Kugay had much fun in his V-Dub. He had to smash his window on friday morning, in order to come to the IDS because he left the keys inside the car, which locked automatically. Good work Faruk.

Team Live-Strip driver Alexander Gräff first had his troubles with the track, but after some rounds, he and his E92 M3 felt comfortable with the track.

The great thing about the Nürburgring is, that there is everywhere enough space around the track, so you can´t crash into the walls. 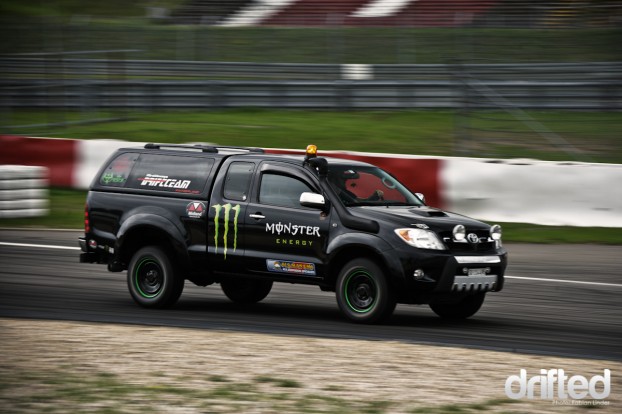 The inofficial tow truck, driven by Roy, was quite busy the weekend.

The R32 by the Tomason drift team also ended up at the hook of the Toyota.

Martin “Pyramiden” Phuramidi did a great show with his RB20 powered R32, but sadly he  killed his engine on Friday.

Even with a broken engine Martin seemed to have fun at the ring. He will return for the European Championship, then with another new RB engine.

A Danish tradition: Carrying bondaged woman on the roof of the car 😉

Back to live: “The Driftbrothers”  (Joe and Eli Hountondji) had a massive crash with their “Dark-White” in Hockenheim, the whole drifting community helped them to get the toy back on the road. Now they are looking for sponsors to improve their BMW-S13-Mitsubishi-Pickup. 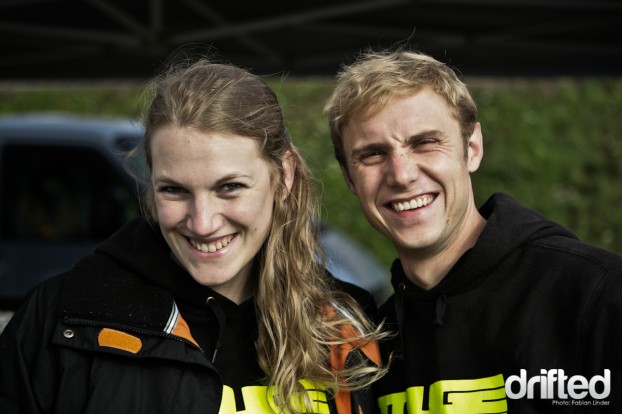 Alain Thomet, best ranked driver of the Speed Industries Team had major problems with steering and engine, so he had enough time for his girlfriend Aline.

The guys from Speed Industries rocked the driver presentation. 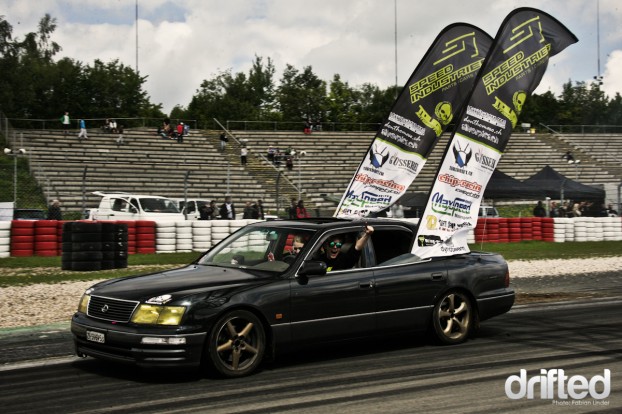 Team boss Tobias Welti was searching for the perfect line, he found her on sunday. 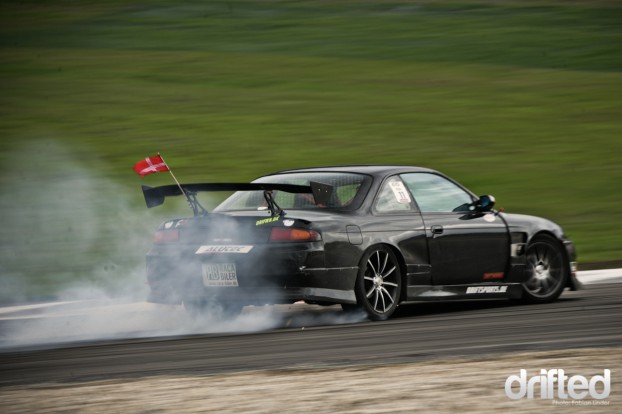 This sweet S14A belonged to Jacob Hagemann, husband of “Supra Sara”, he sold it to his  friend Gregers Pedersen.

From the beginning to the finish line, the 1JZ S14A went sideways, good performance!

… and through the “Dunlop” turn, the car was always followed by a big white cloud.

Sunday morning: The drivers warming up for the battles in one big drifttrain

Last instructions before the battles started. 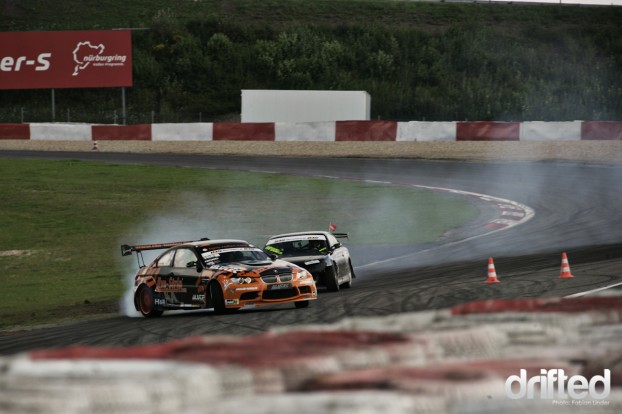 Alexander Gräff in his E92 M3 won against Gregers Pedersen, because Pedersen straighed a bit to much.

Although some dirt droppin´, Joe Hountondji kicked out Phil Guillod in the great-eight battle.

Michael Scherr (Z32) won against Markus Militzer in the great-eight.

Michael Scherr is still not completly lucky with the setup but he’s on the best way to a reliable top-five car.

“The Monster” showed it´s striking power delivered by the V8 under the bonnet. Alex had a spin in great-eight, so Tobias Welti ascended.

Niels and Joe fighted hard for the entry to the final. Niels had a close win and was in the Final.

Joe was very happy to get the fourth place with a car which build up isn´t completely finished. 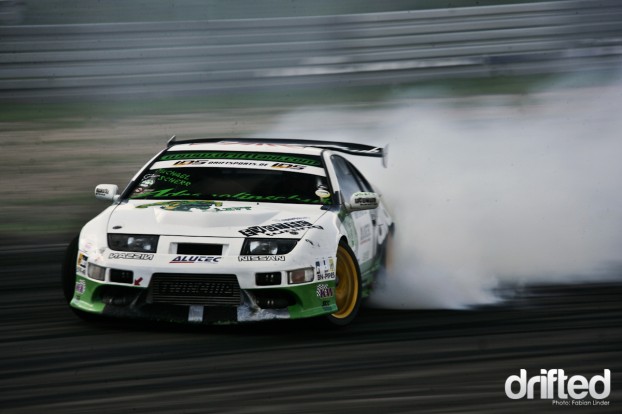 Michael Scherr from the Nissan Driftteam fighted hard for the third place, he really deserved it. 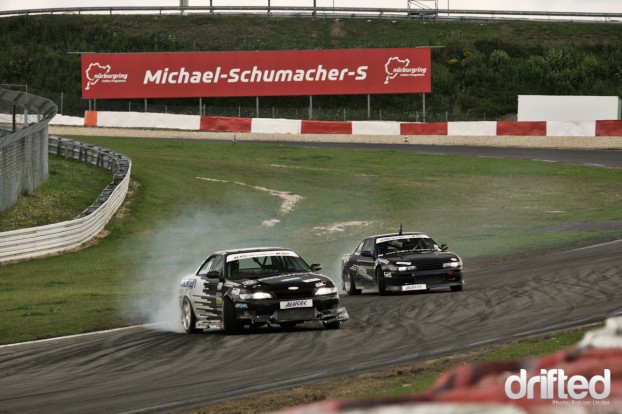 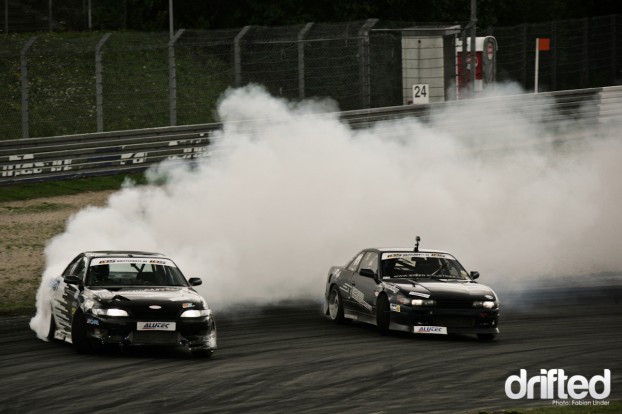 After two breath taking re-runs Tobias Welti won against Niels Becker, who had to resign due to engine problems.

The danish guys celebrated their second place with the misuse of a fire extinguisher – Keep drifting fun! 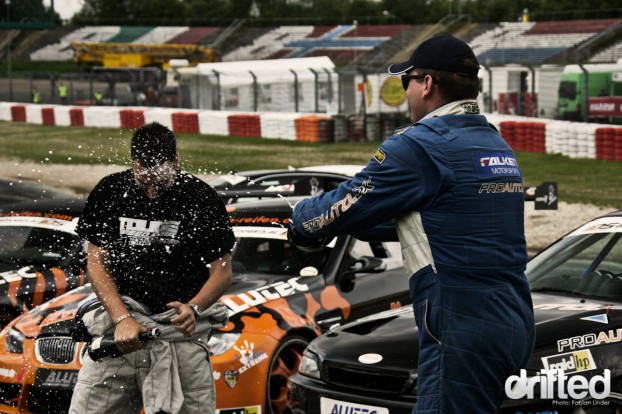 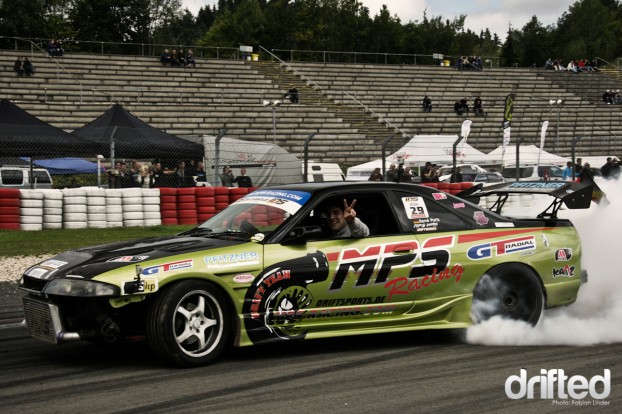 After the ceremony, there was one last thing to do: Burning the last set of tires before watching the DTM race.

The DTM guys had several television choppers around.

Bruno Spengler won the DTM race at the Nürburgring, seven Mercedes on the first ten places. 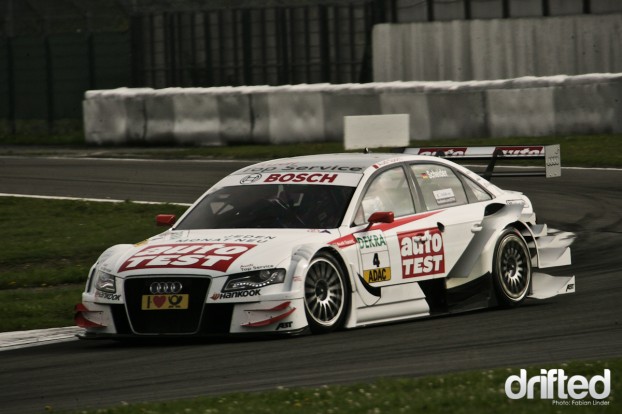 The standings after five of seven races:

Written by Fabian Linder Born in Germany, living in Germany... addicted to drifting, photography and art...