The Tuning World Bodensee is Germany’s biggest tuning convention, and for most of the car owners one of the most important season opening dates. For nine years its been held at the new convention center in Friedrichshafen, a small town on the lake constance. Propably due to it´s situation right on the Swiss border, and not far from France and Austria, it´s highly frequented. The past years there were over 80,000 visitors. For five years, Falken is responsible for the drifting area outside the halls; this year they brought the whole team to the lake constance.

Early in the morning the playground was prepared, meanwhile the first fans gathered at the fence. Every show was very crowded, so it was hard to get a place in the first rows. 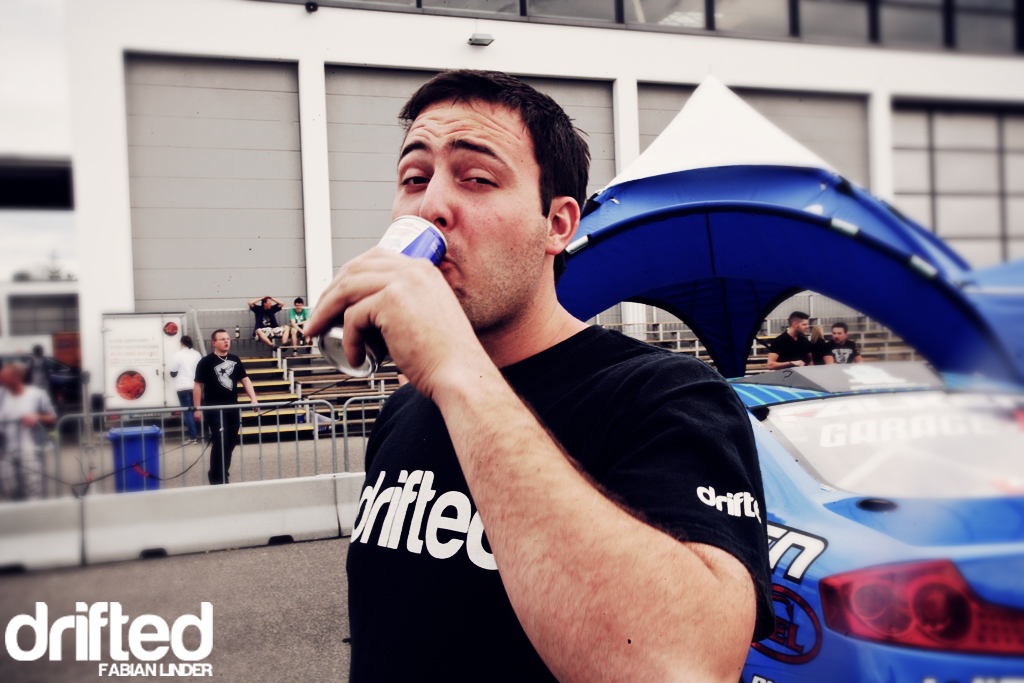 No driftshow without a proper breakfast, at this point we´d like to have your attention on this beautiful shirt you can grab at our shop. 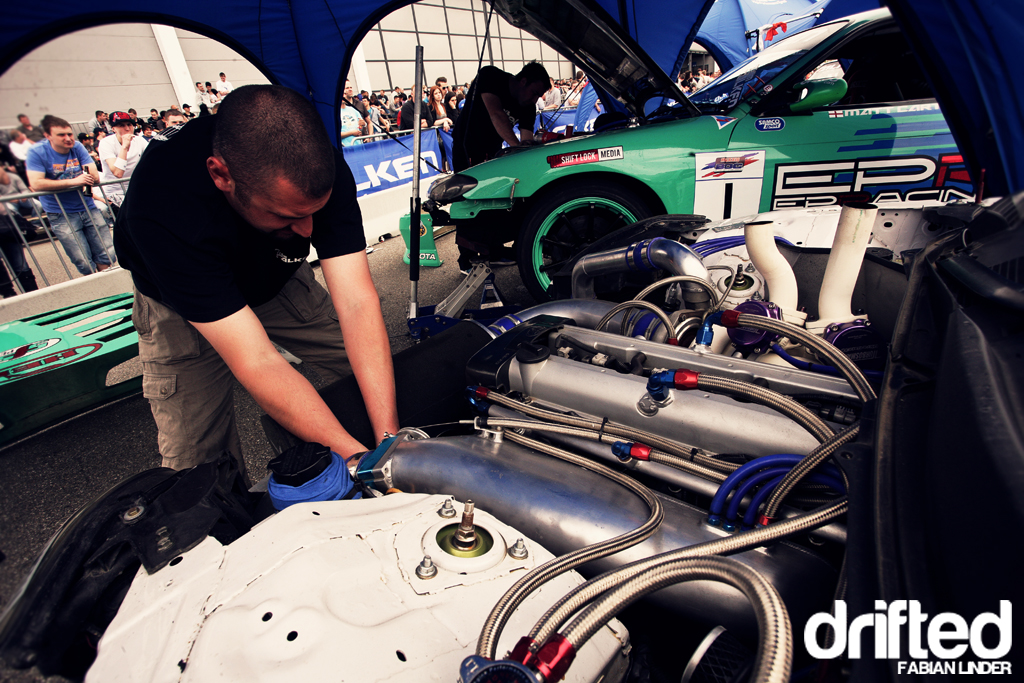 After the breakfast, Paul and Matt checked their cars for the first of three shows per day.

Lars Verbraeken brought his new R33 drift car, which he build for the countless drift shows he does, his new competition driftcar for the next years will be a E21! Sadly his R33 wasn´t mapped, so he remained in the pit. 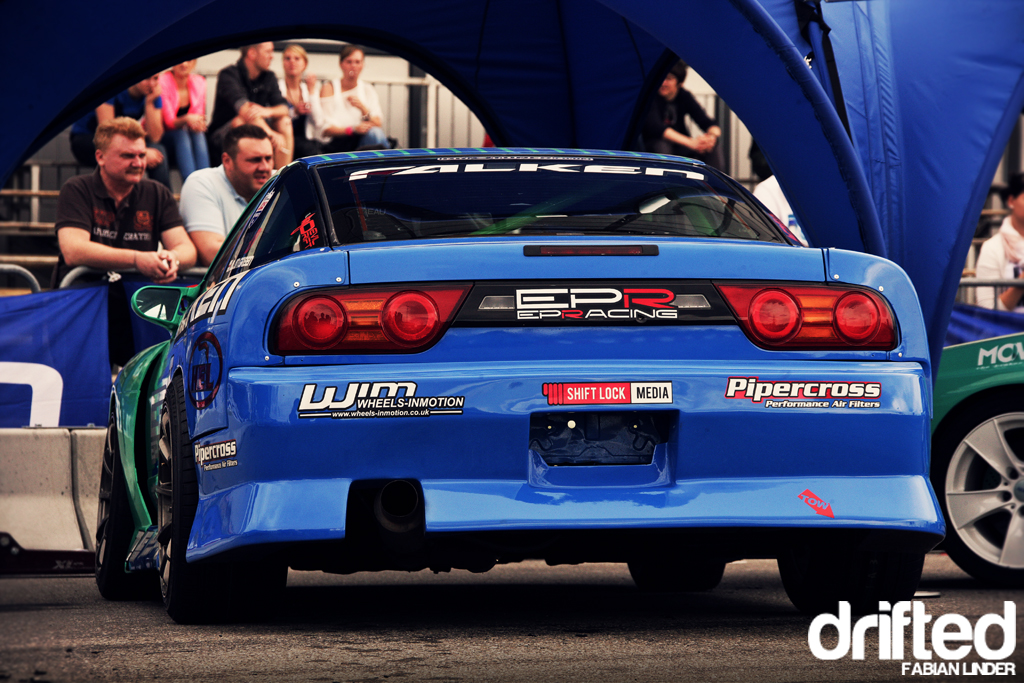 Another new car: Alans 180SX really bewitched me with his rad sound and the clean look – his SR20 powered S13 is revin up to 9ooo rpm.

Before the Falken drift show started, “Robeat” a german beatboxer performed and warmed up the crowd. He got nation wide recognition while participating in “germany got talend” 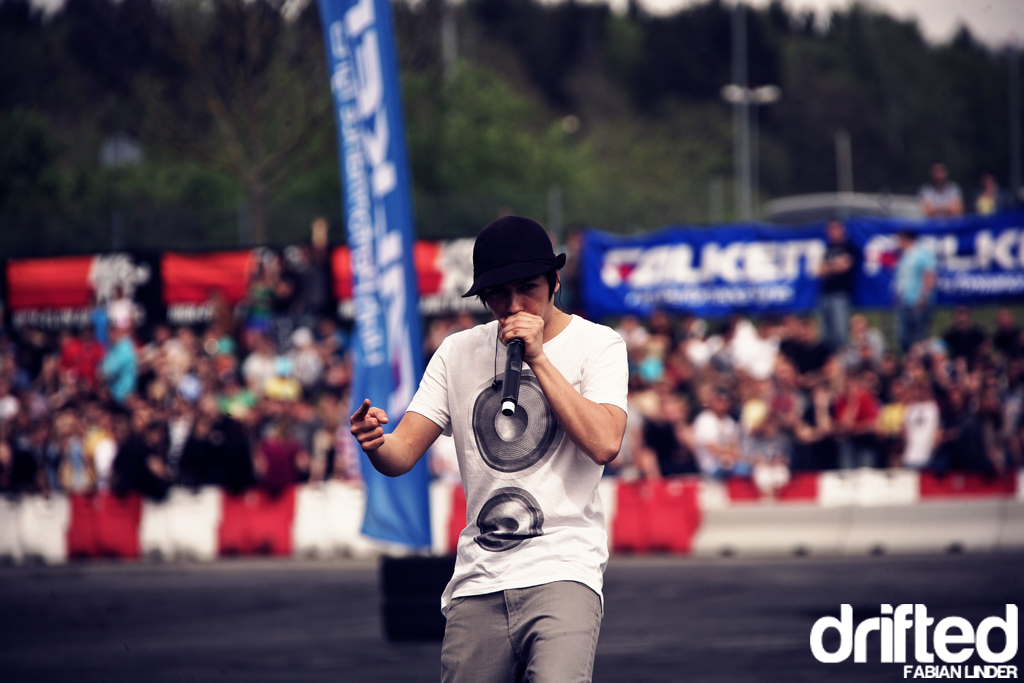 While the breaks we had some nice talks to Mr. “Robeat”, a really down-to-earth person which always thinks about improving his and our show.

The Falken girls tried to work, but always some gentle english driver interrupted them 😉 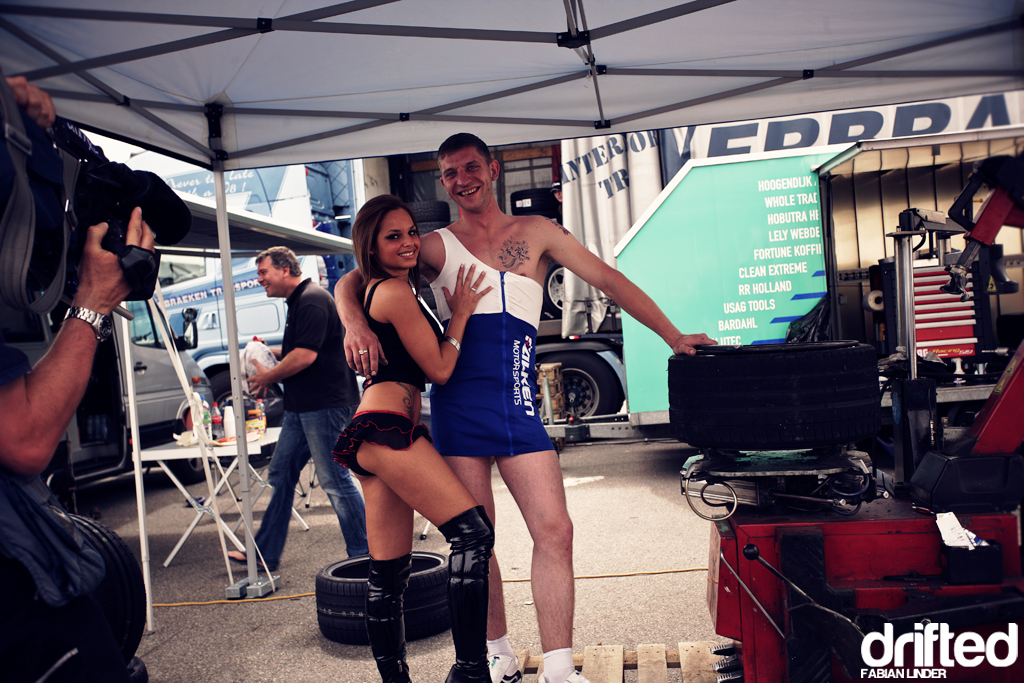 The Falken girls have several skills, some even manage to swap tires. 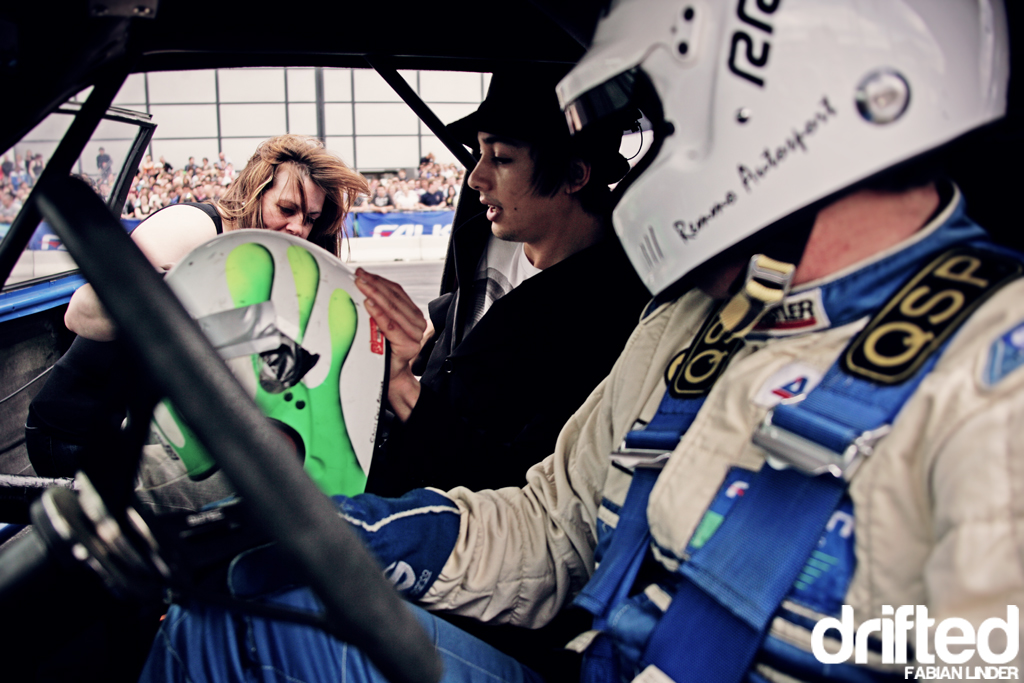 After his show, Robeat was picked up by Remmo Niezen to do a little spin in his E30. Robeat told us he never felt that much adrenaline in his blood. 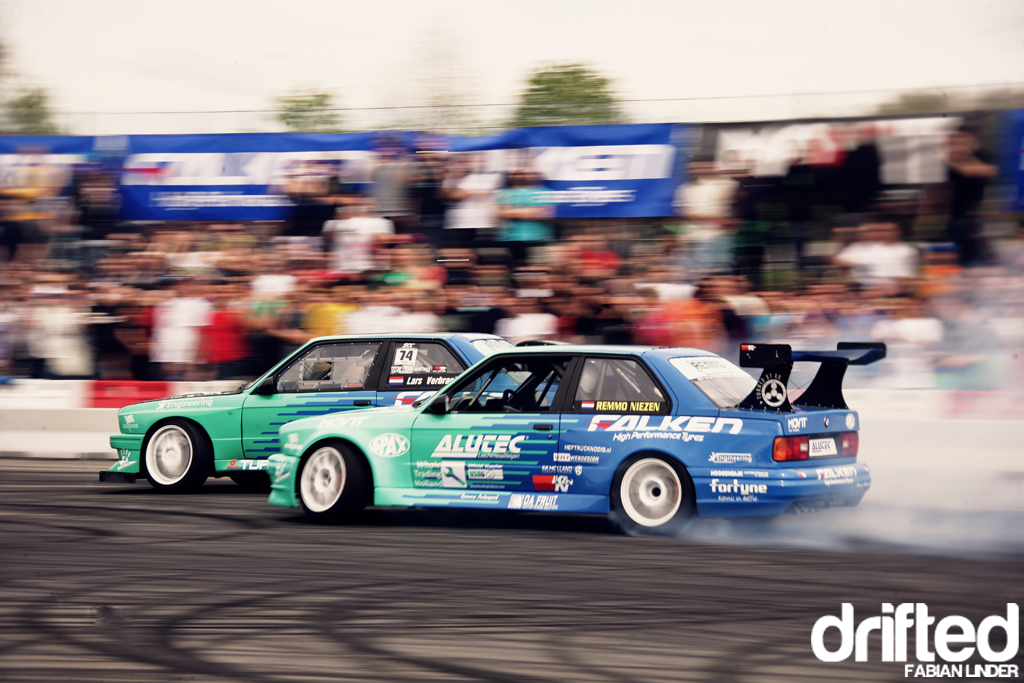 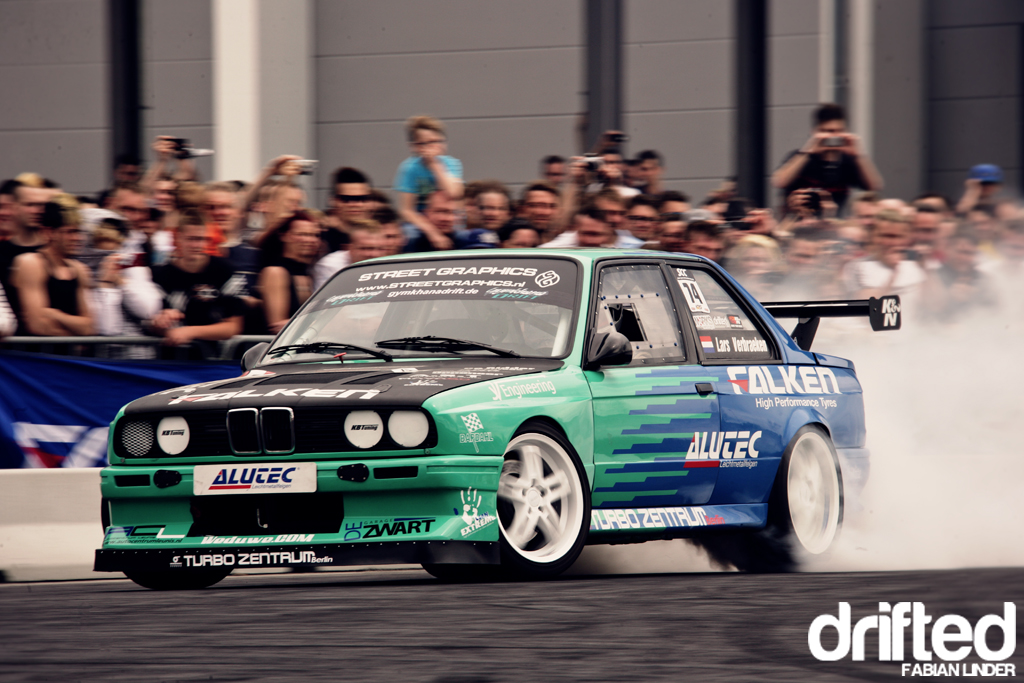 By the end of this year Lars wants to sell his smoker E30 1JZ, in order to work on his E21

Michel Ditmarsch showed up some Gymkhana elements in his E30, with Remmo and Lars cars used as obstacles. With the compact and flexible E30 are perfect for doing stuff like this. 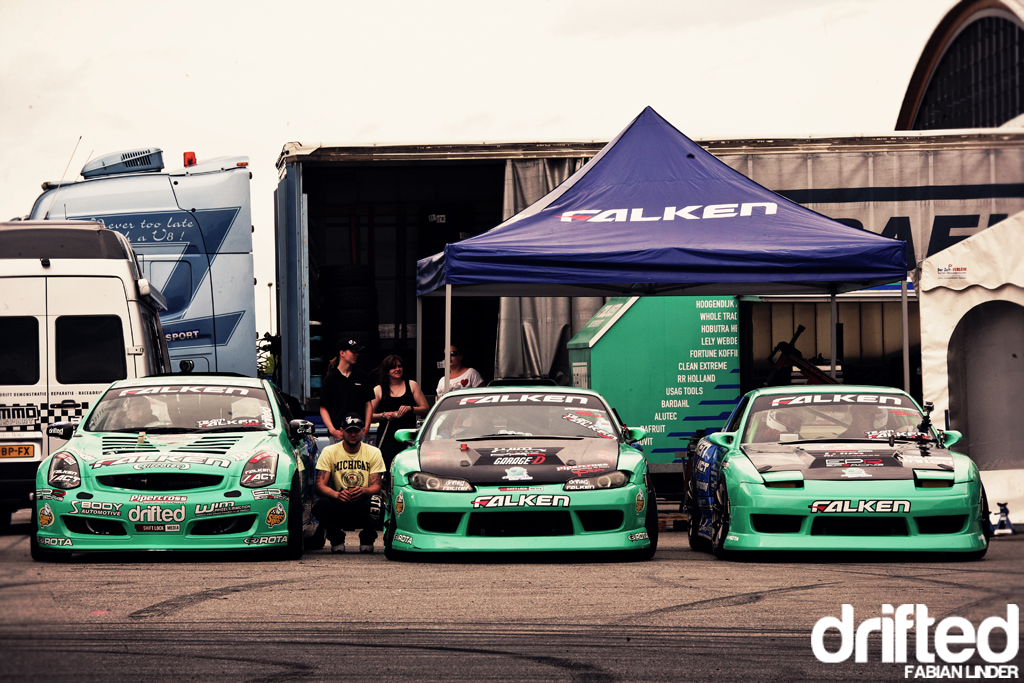 While the dutch drivers where playing, Team Falken UK was waiting in the pit 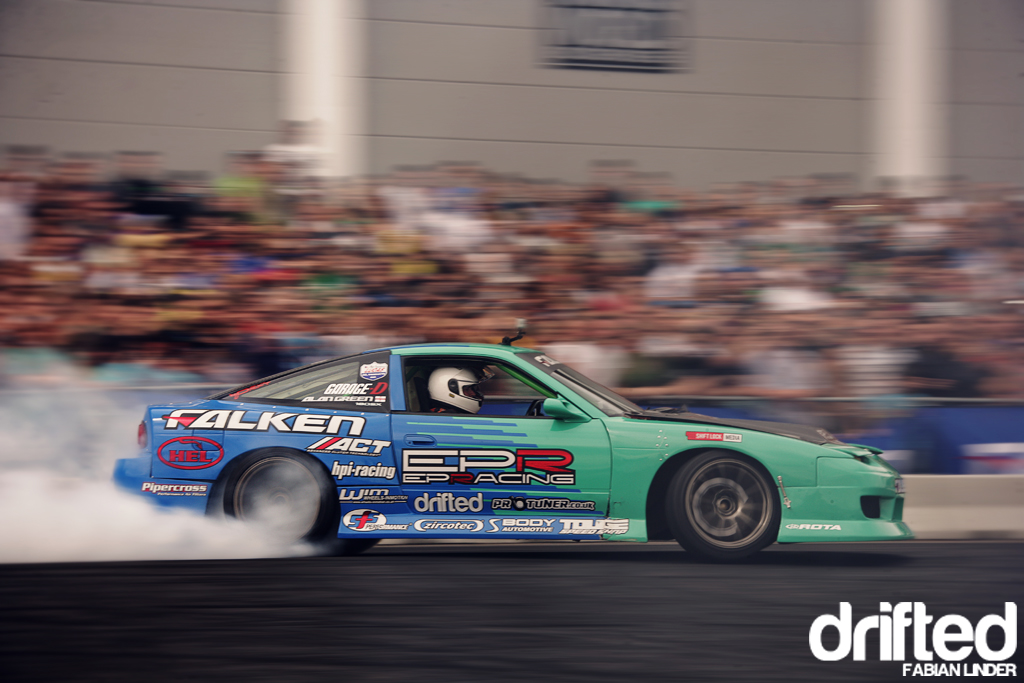 When Team Falken UK was unleashed, the tires were without any chance 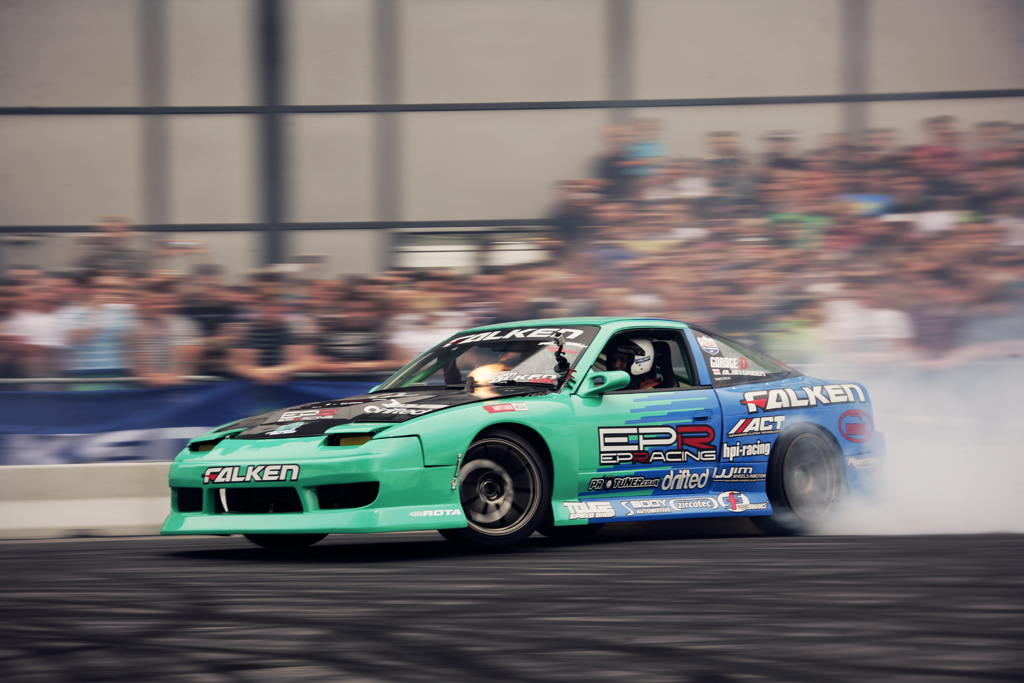 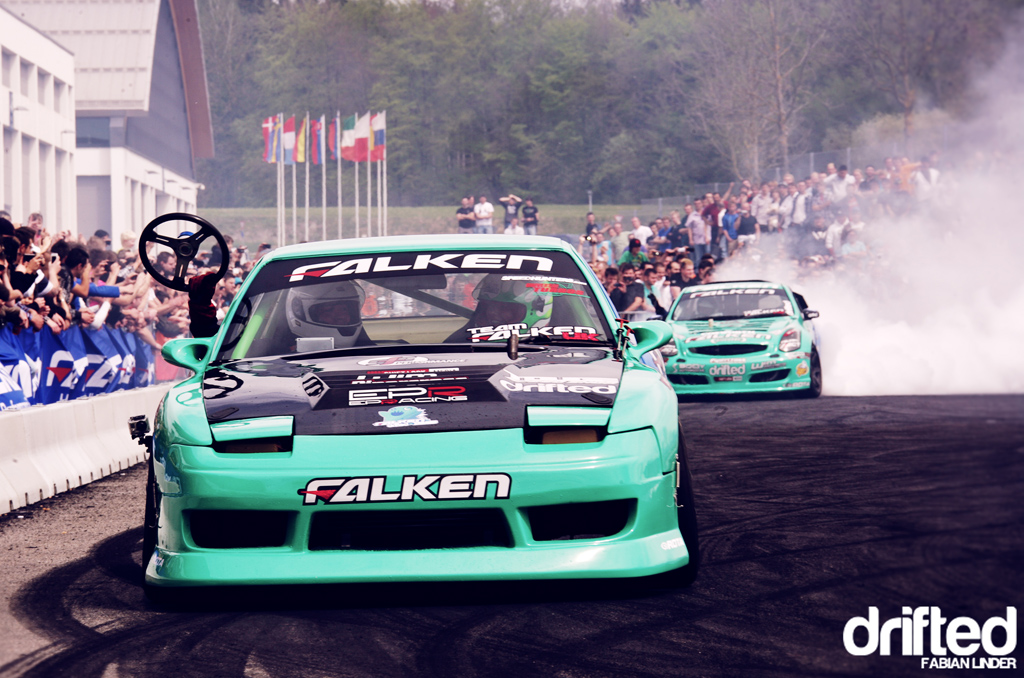 While Matt runs without hood, Alan tried without streering wheel 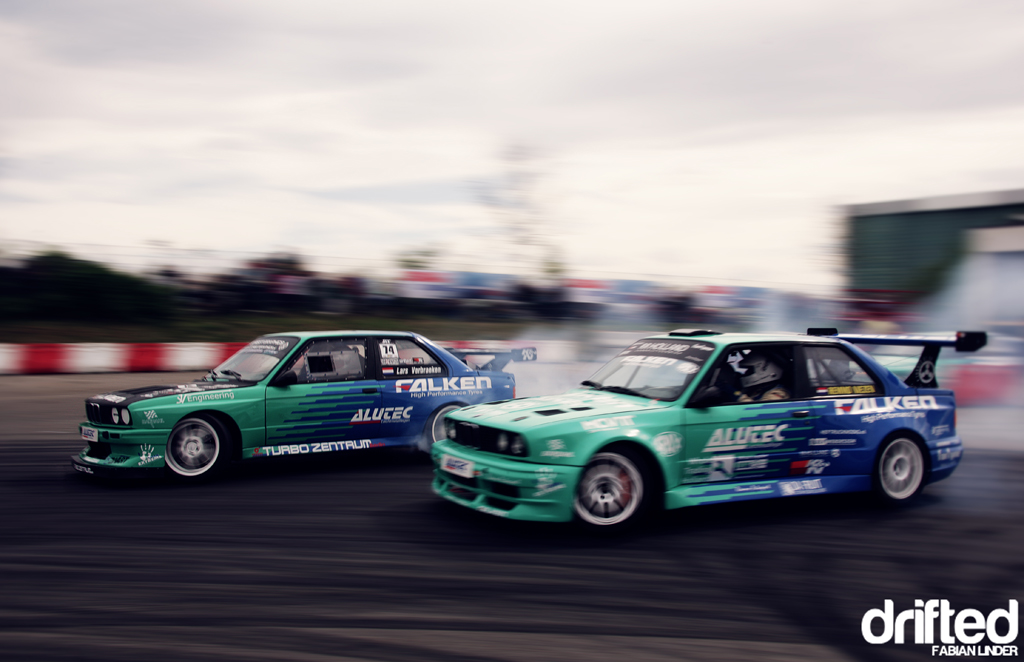 Little break for the Falken UK guys, the dutch showed the crowd some impressive twin battles

Remmo always finds some space to drift through 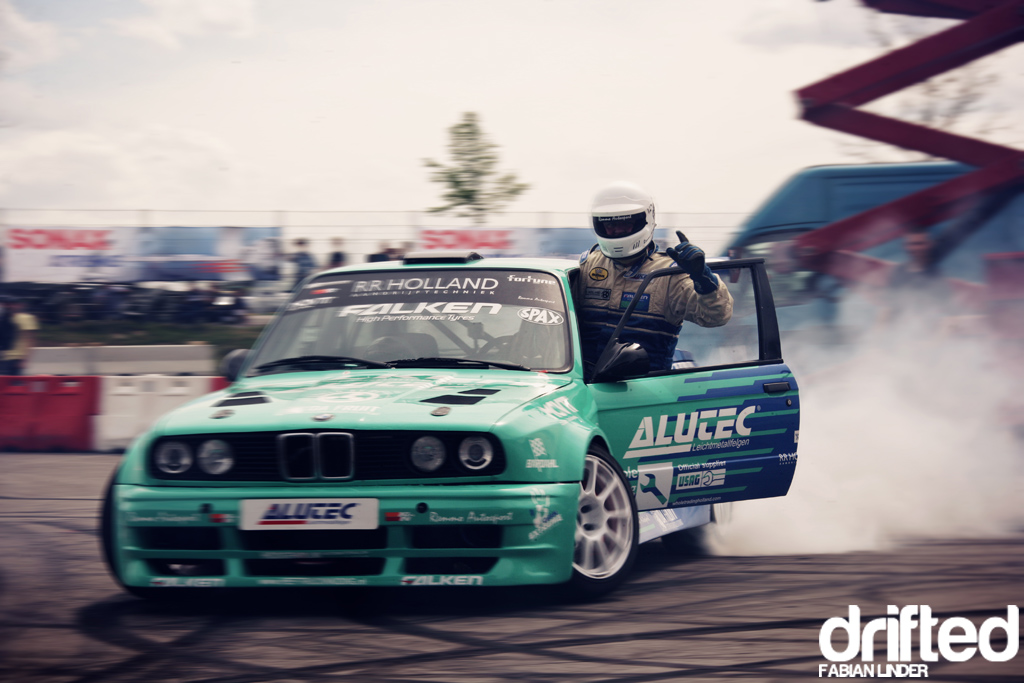 The main part of the Remmo Niezen show: One handed donuts infront of the audience 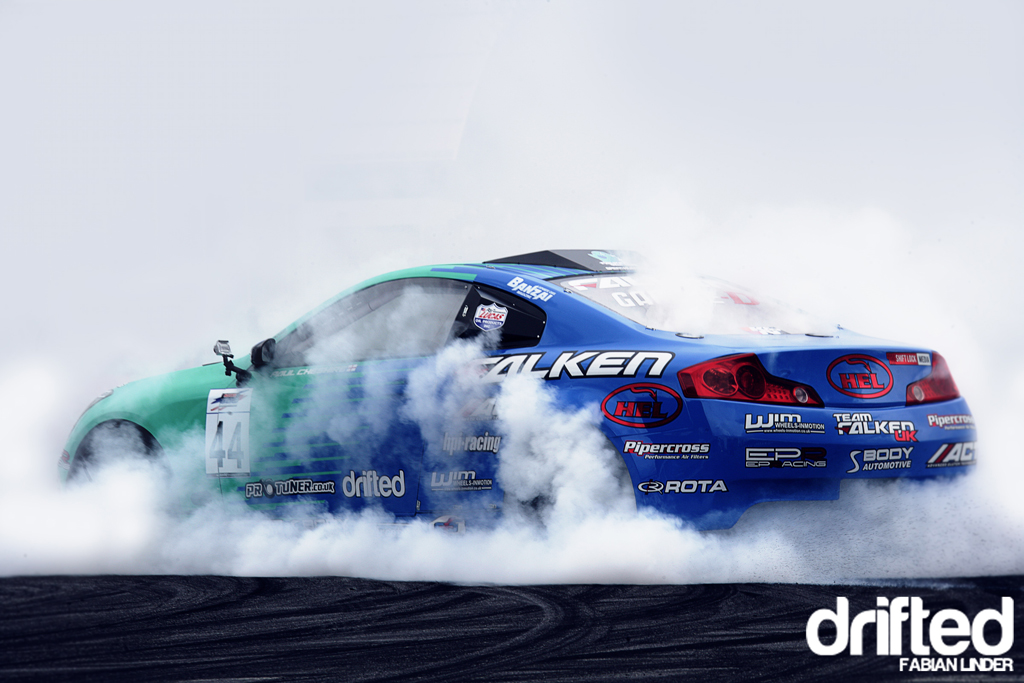 ” the mother of all burnouts ”

I can´t find a subline for this picture 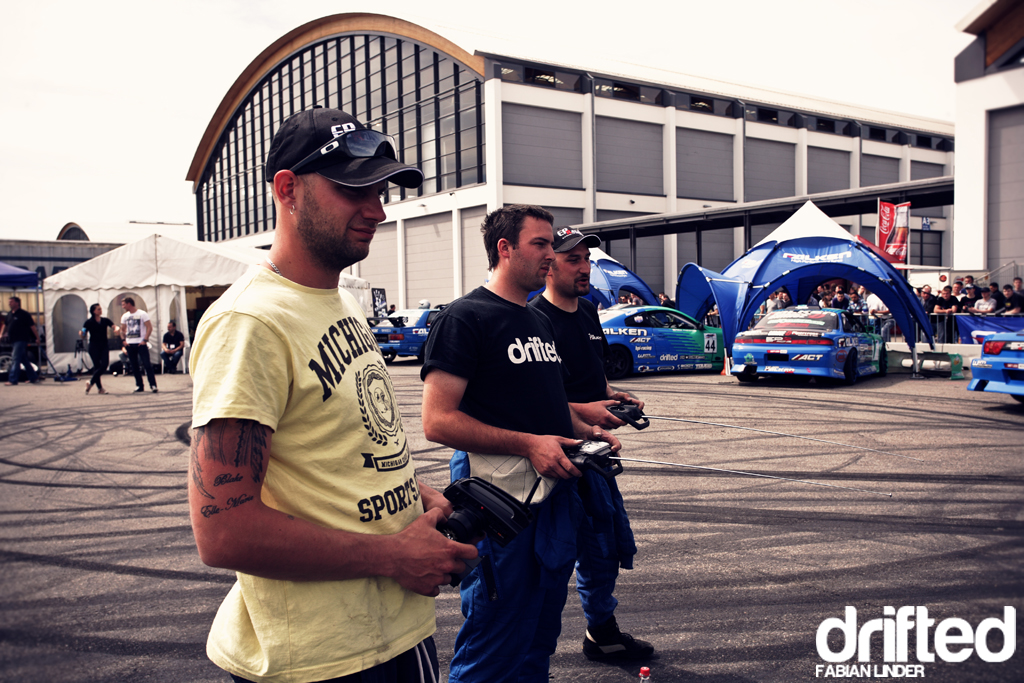 During the break, the boys were playing with their hpi RC Drifters 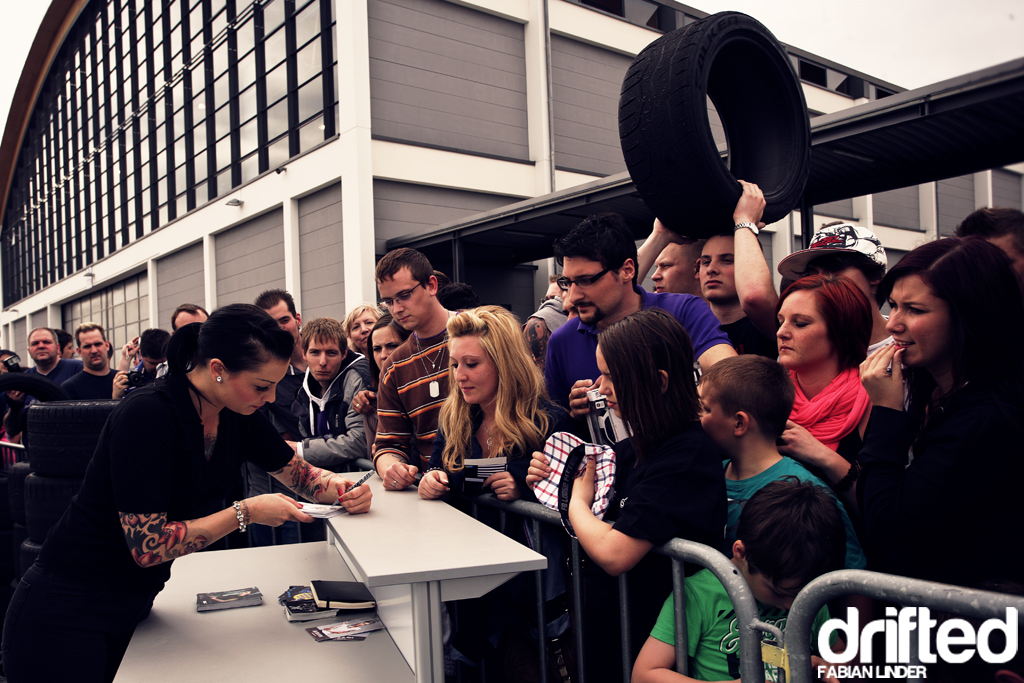 The signing session with Lina was crowded 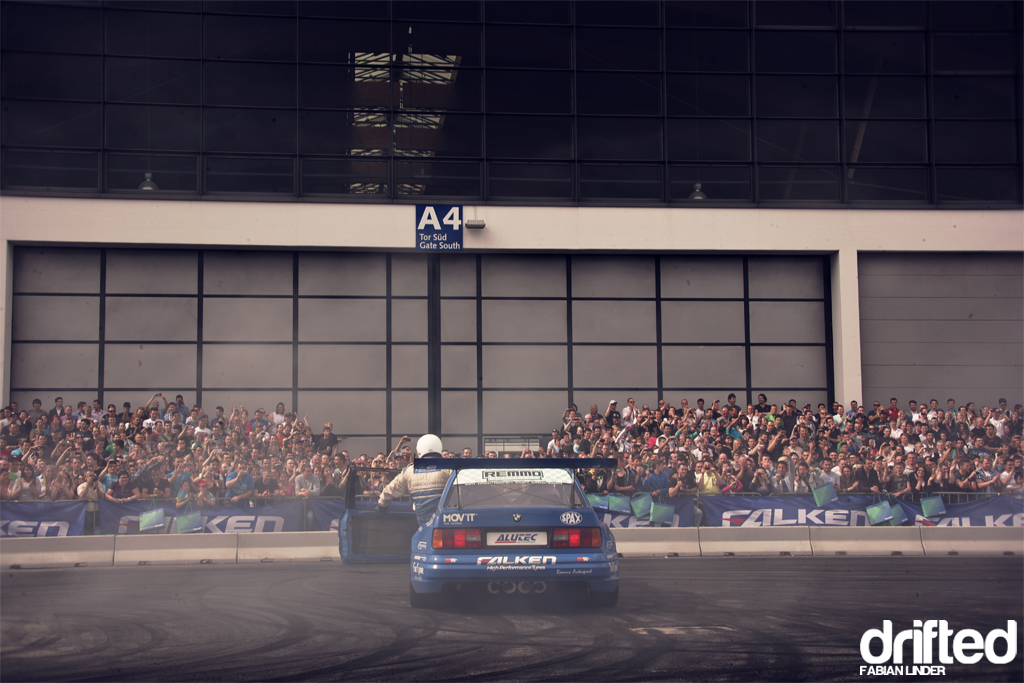