My friend Markus Bruhn invited me to come to Dresden former east Germany, where he and the “Clutch killers” team were invited to do a drift demo at one of the biggest tuning meetings in Germany. Since I hate it to drive alone long distances, I asked “Clutch killers” driver Pierre Tucholka to pick me up with his VW T4 and his beautiful R33 Skyline. 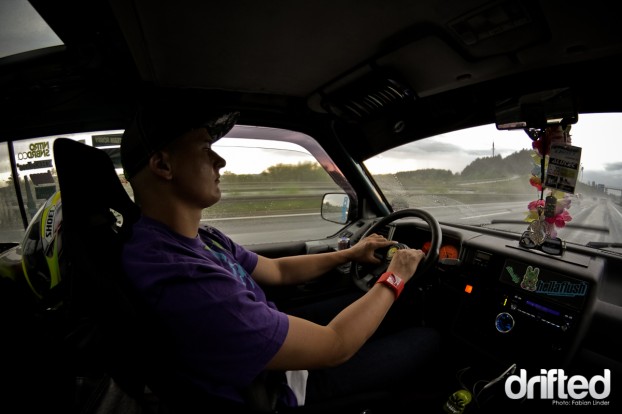 So I started of with my mate Pierre and his Bangbus to Halle, where the crews homebase is. He hast tricked out his bus with japanese bucket seats, a TV, a nice sound system, OEM scirocco rims and a gas mask (?!?!). 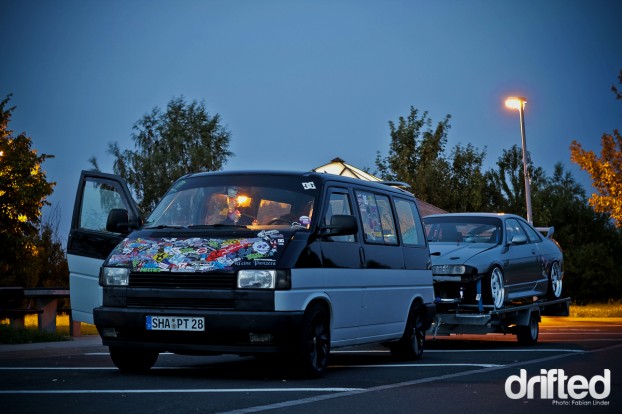 On the autobahn everyone who passed by was watching at us, I don’t know why… stickerbombing and skylines are not very common, I suppose.

We arrived late at the evening at another friend, Jens, hes living in Halle and has the coolest car around, a Mercedes 500E from 1993, black with 20 inch RH rims and a custom build exhaust system which makes the V8 Benz roar like a touring car. After a ride and a quick photo shoot with the Benz, we fell immediately asleep.

The next morning we prepared everything for the drift show, loaded the cars, picked up some merchandise to sale at the event and started the 150km trip from Halle to Dresden. 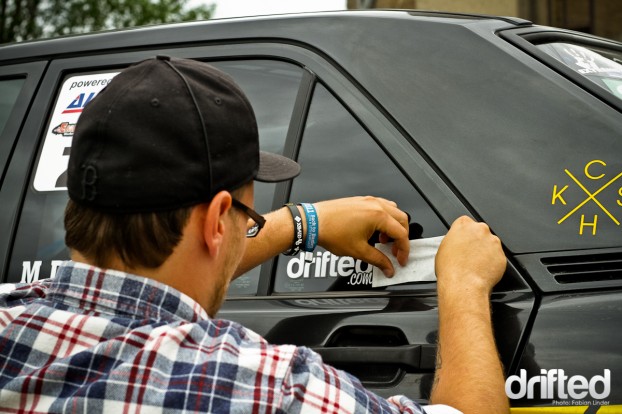 Markus, the organiser of the “CHKS” show tagged the car with stickers of his favorite blog

Mark our second drifter arrived with his freshly restored W123 on chrome rims. 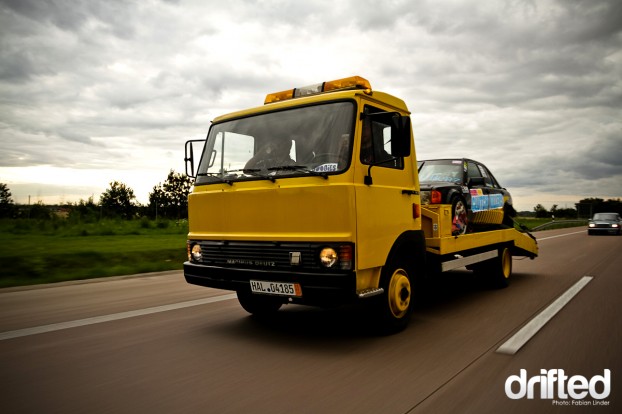 The yellow truck was borrowed by a car dealer, it a top speed of 80km/h, inside the cockpit it was sticky and hot but our truck driver Jens normally drives tanks through Afghanistan, so he was getting along with the situation. 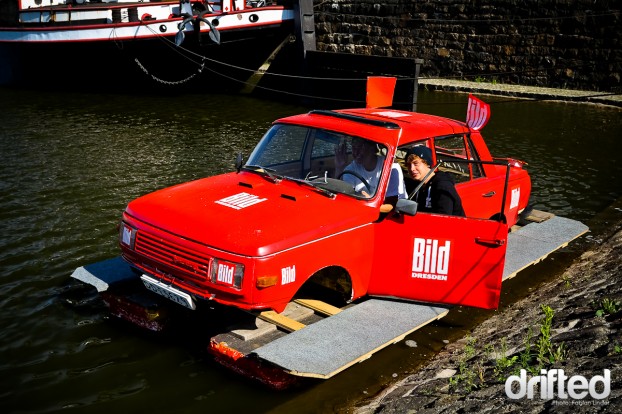 After we set up the track and unloaded the cars, we slept in a hotel nearby the expo, at the harbour of Dresden. The next morning, the boys discovered this strange thing in the port, they immediately climbed on it, just to notice that its not drift-able. 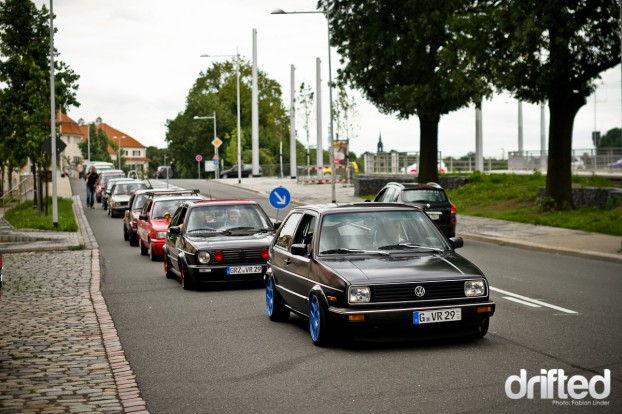 The “XS Carnight” normally is set in a parking lot, but since the authorities of Dresden and the police banned the parking meeting, they decided to host it at the expo of Dresden. By midday, the VIP cars arrived, 1500 cars which where selected by the organisation, they get did get the good places inside the expo. 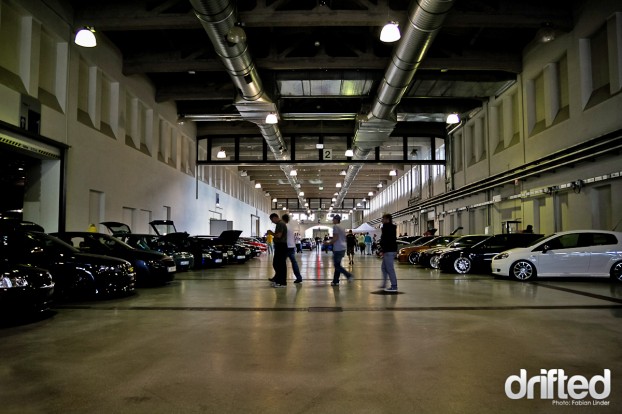 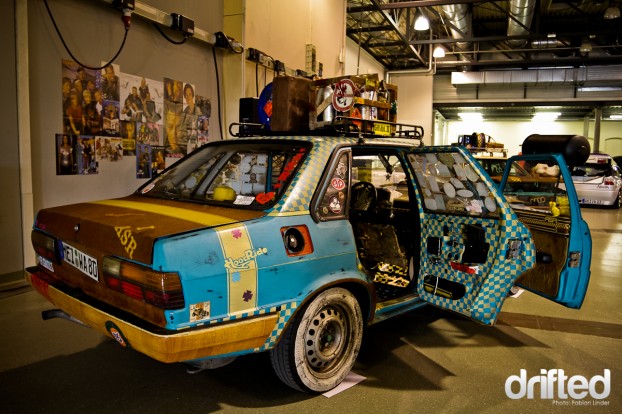 At the moment there are two big trends in Germany, “hoodrides”… 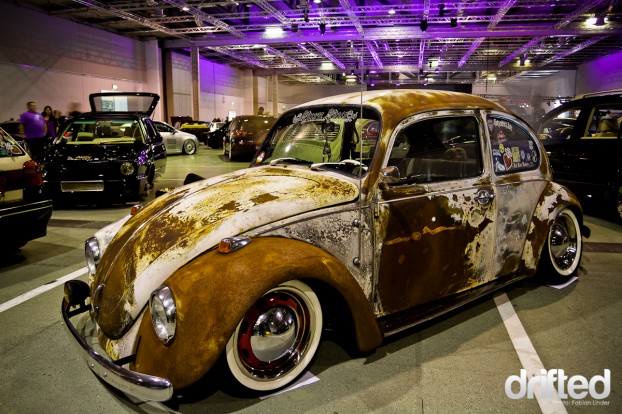 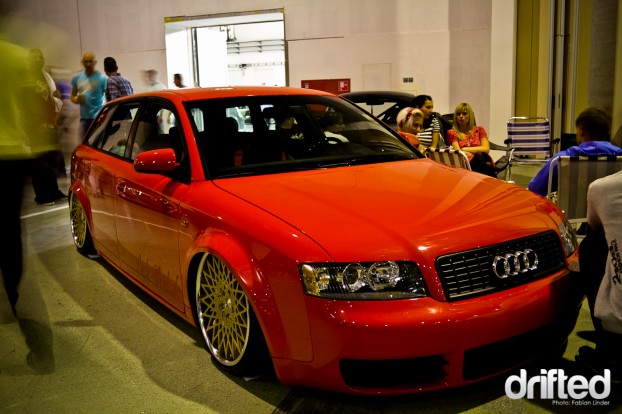 … a clean “Eurostyle” with big rims.

The masses already gathered at the fence, waiting for our show

Mark Dittmar did the start in his Mercedes 190E, the crowd was already at party mode.

After Mark hyped the crowd, Pierre Tucholka set them on fire with his R33, they were really blasted away by the sound and the power of his Skyline 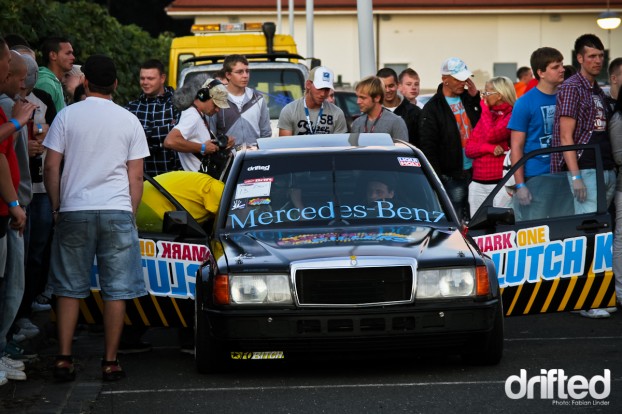 Dozens of people bought a ride in the drifttaxi, there were even two TV crews around 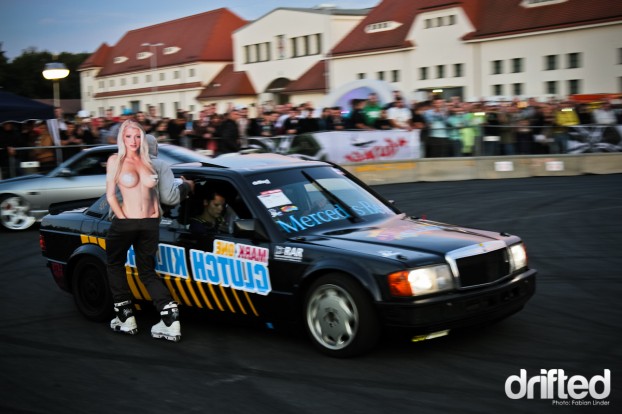 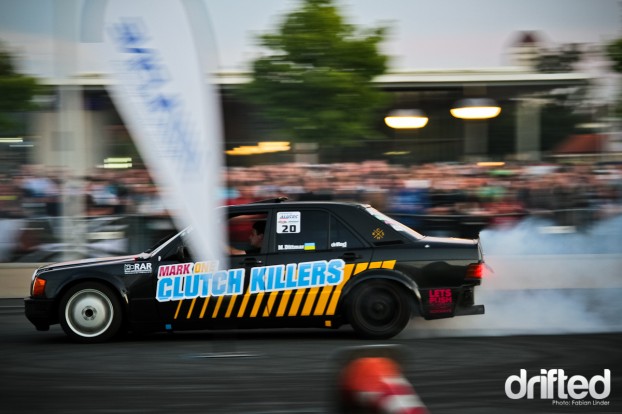 Another highlight was a watermelon on a rope, which Mark smashed with the side of his Mercedes 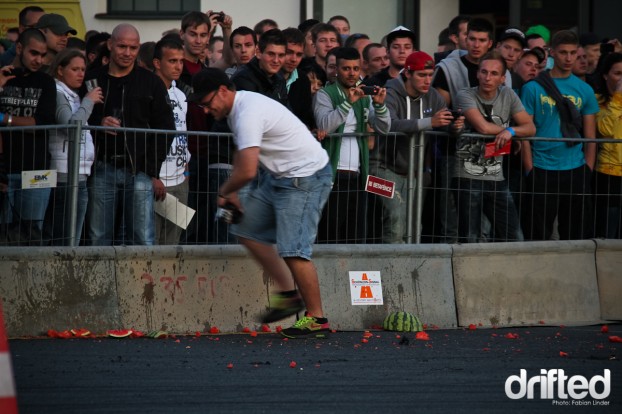 On the first attempt, Mark hit the melon with the GoPro on his rear, Markus secured the GoPro from the track.
The GoPro still smells like a  watermelon. 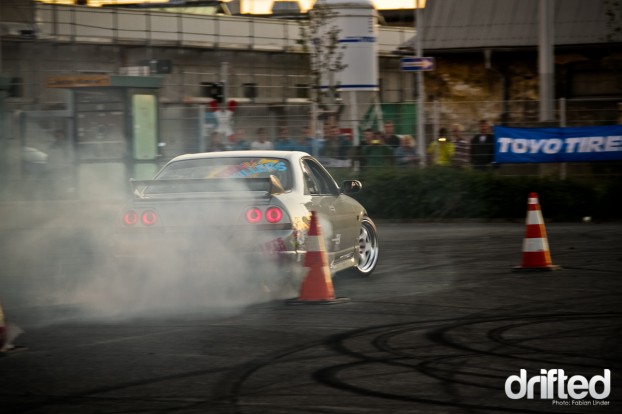 Pierre tried to make the small track as fast as possible, so he can use the 400hp of his RB25DET

The crowd loved the Skyline for his immense flames. Every time the car when full throttle was released, the exhaust spitted flames

In our second show, we drifted around a volunteer in his Civic

Pierre had big fun, the crowd was screaming, he felt like a rockstar

We drifted till midnight, luckily I had my 50mm f1.4 lens with me

The longer Pierre was driving, the bigger the fireballs were

For the final Mark (left) wrecked another Melon with his W201. Late at night we got into the expo and slept on the floor of a conference room. 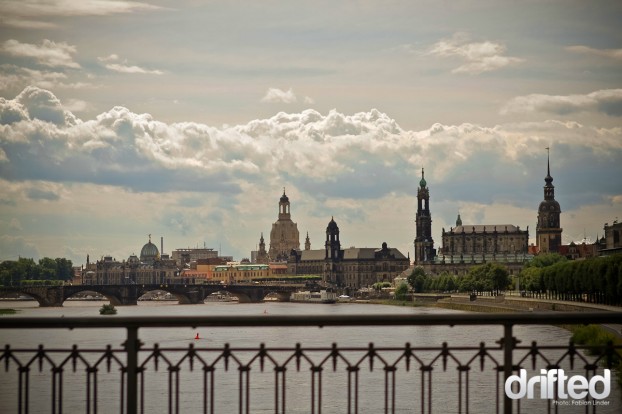 After our breakfast at a  fast food restaurant with a “M” on the sign, we left beautiful Dresden and traveled home to the black forest.

During the next weeks I will also edit a short video of our show and the road-trip, but first I will be at the Eurospeedway for the IDS Round 4, this weekend.