In the number of years that I’ve been following the Maxxis Tyres British Drift Championship I’ve seen the series go from strength to strength – in organisation, in presence, in professionalism and in excitement. 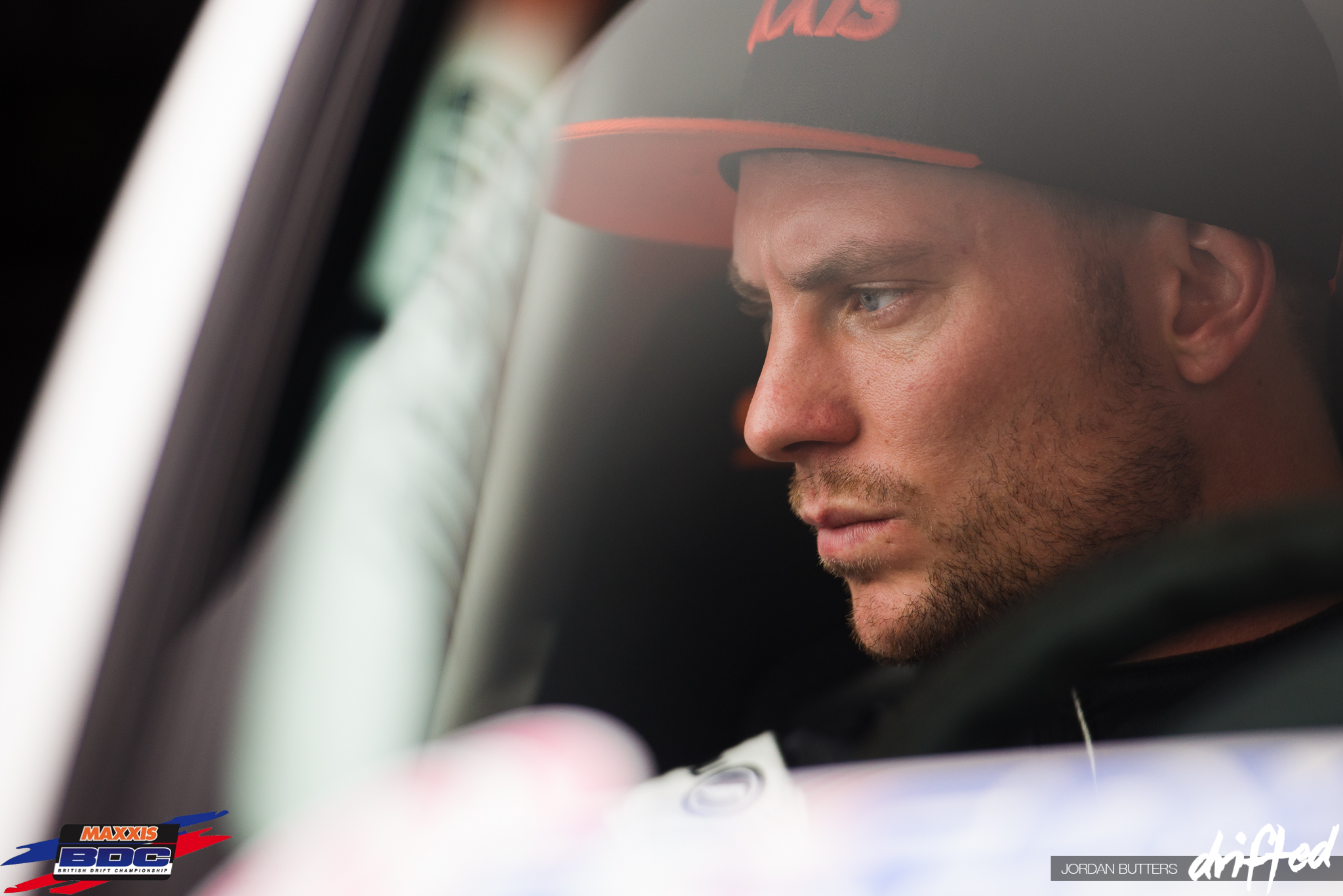 I’ve also witnessed the drivers and their machines follow a similar transition. 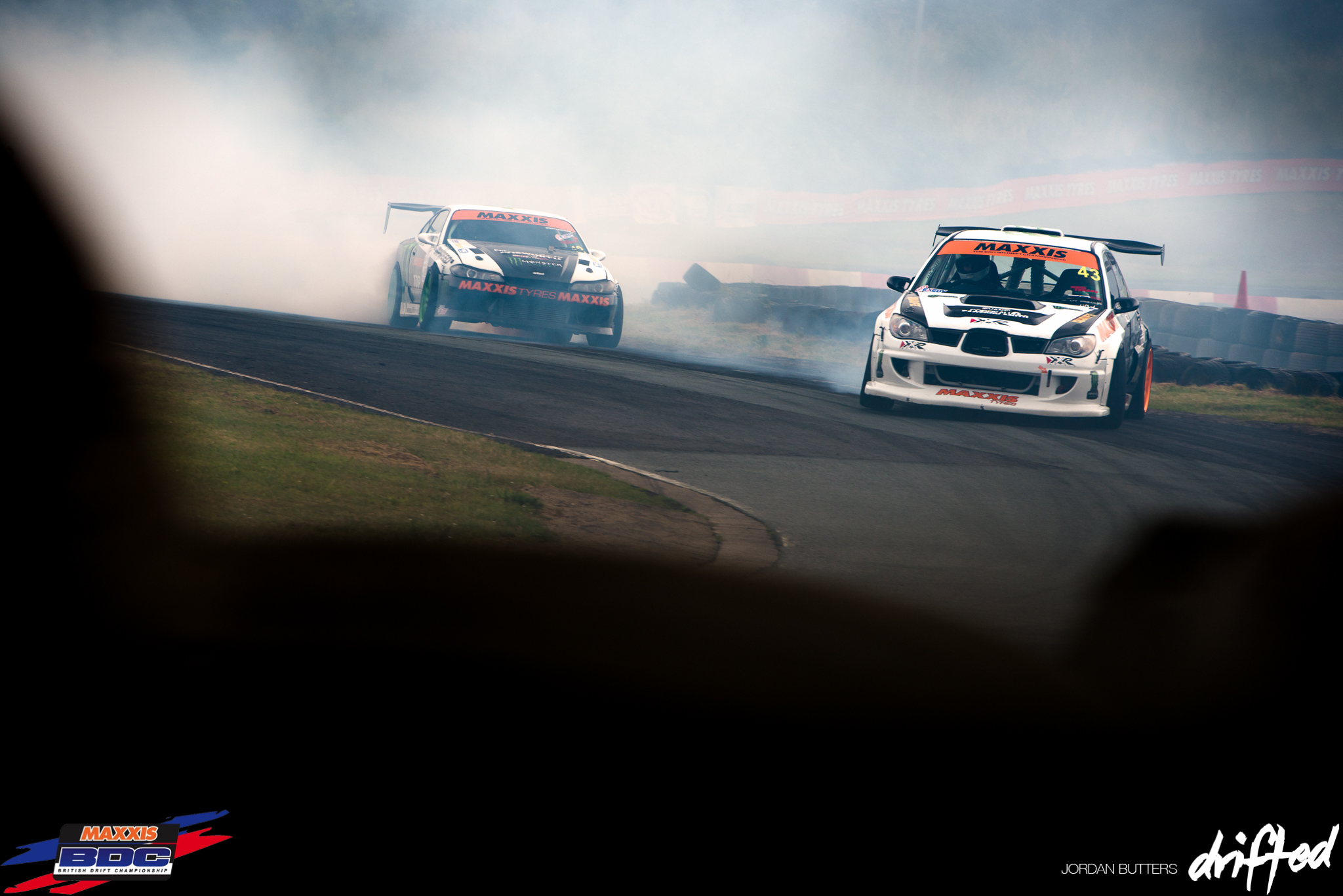 Where five years ago you had a field full of cheap S-chassis Nissans at which little apparent attention had been paid to engineering, quality of workmanship and aesthetics, now you have a rich field of variety.

Drivers stopped making road cars suitable for drifting, they started building cars from the ground up. 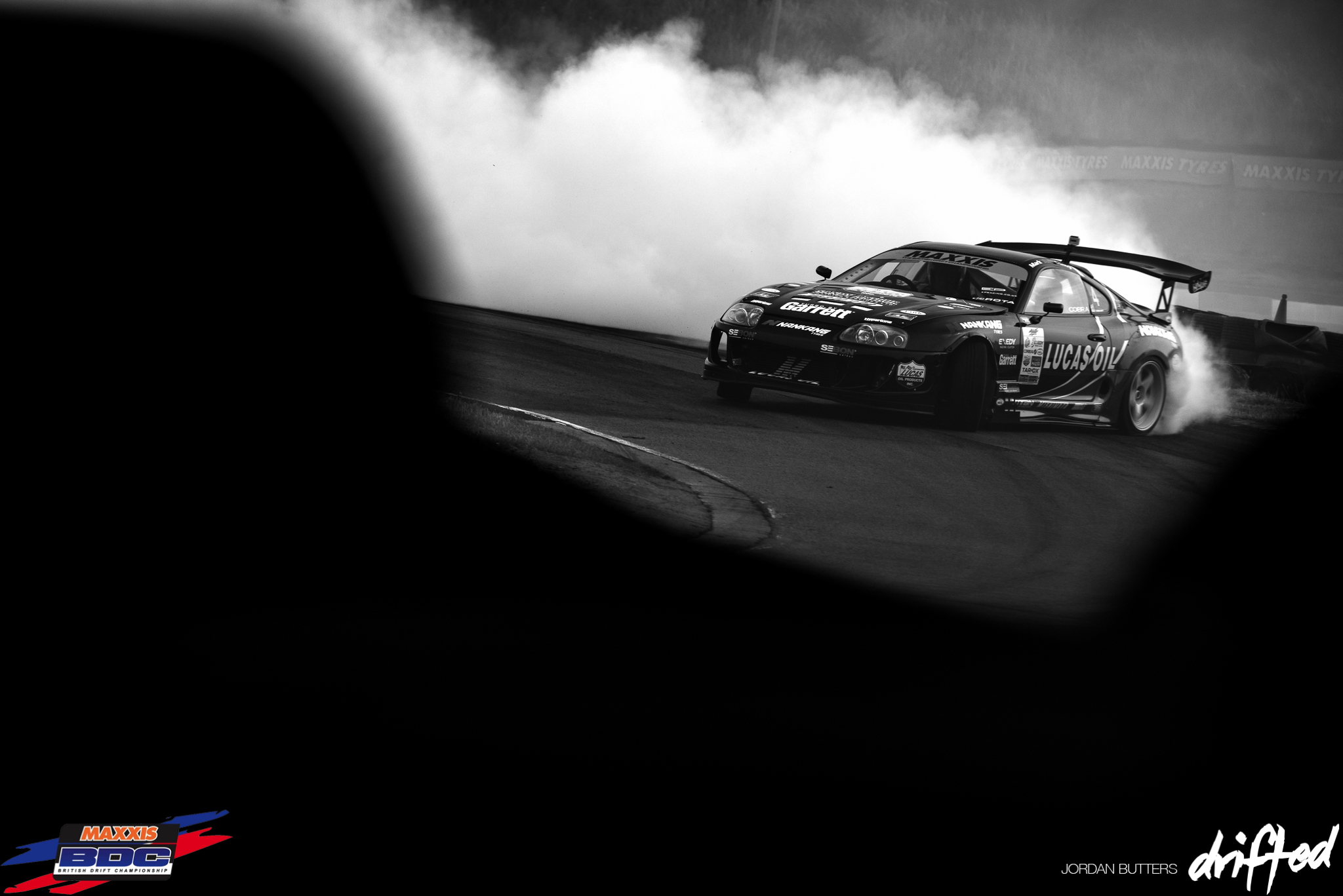 These are cars designed with one purpose in mind – complete decimation of rubber.

Last weekend’s BDC event at Teesside Autodrome marked the mid-way point in the 2014 season, and much of the excitement leading up to the event was concentrated on this one car.

Seeing this car on the start line prompted me to take a look at the style element of the sport that we love, and why it plays such a big part in drifting.

As a judged sport there has to be criteria that the judges work to.

Exactly how the judges work and the factor that they take into account vary slightly from circuit to circuit, series to series and from one continent to another, but the underlying theme throughout is the same.

The four cornerstones of drifting are – speed, line, angle and style.

Aggression comes under the heading of style for the purpose of my point, but we’ll come back to that. 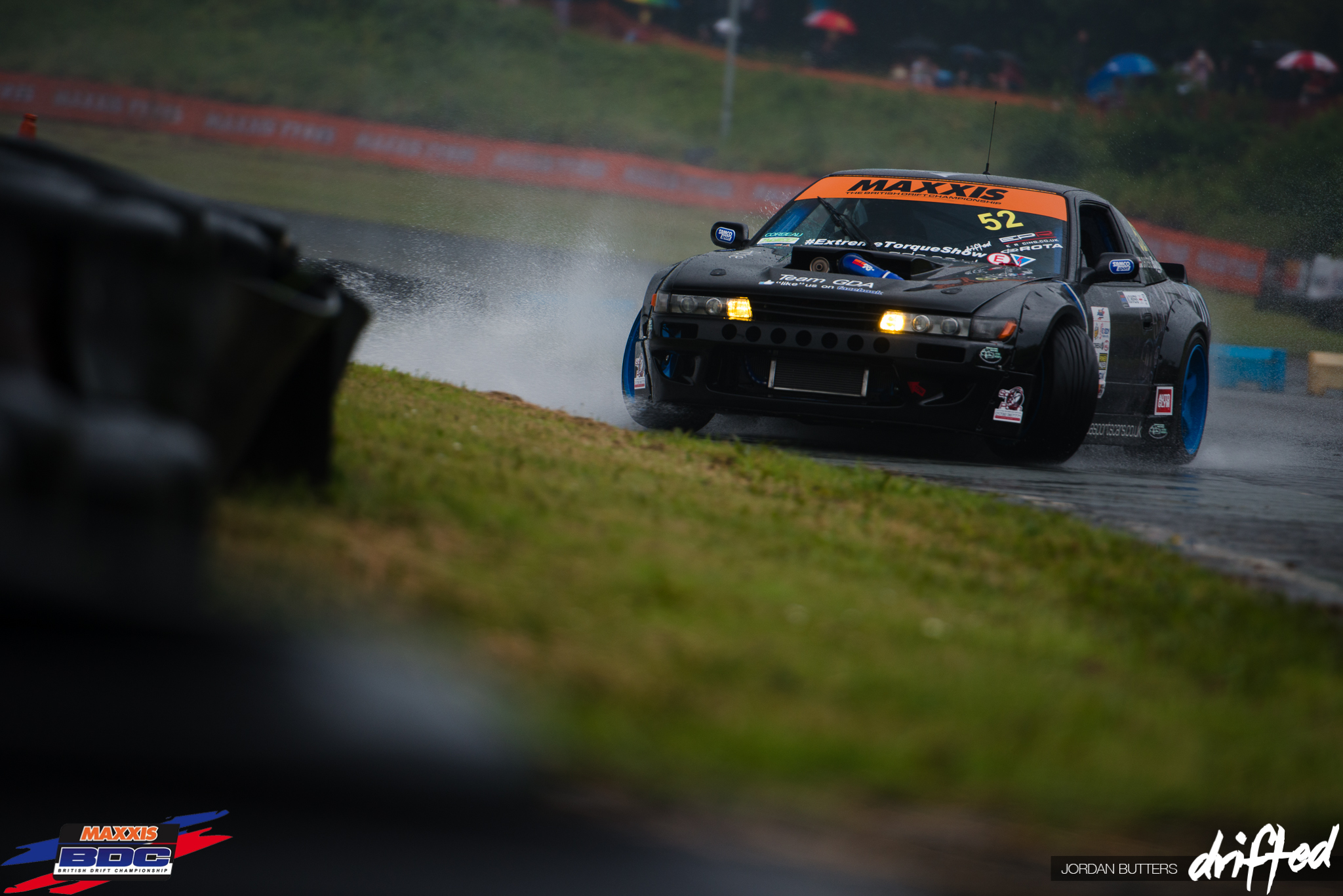 I shouldn’t have to point this out, but style is the odd one out here.

Speed is a number. The higher the better.

Angle is also a number. Once again, the higher the better, as long as it doesn’t compromise speed too much.

Line is tangible. You’re either on it, or off it.

Style, however is open to interpretation. Your’s, the driver’s, the judges’ and the audience’s.

Style is what makes drifting different to every other sport on four wheels.

It’s a damn stylish sport too, the thrills, the spills…

…the passion, the drive…

…the comradery, the heat of the battle, I could go on.

It’s a pretty broad term too. It covers everything from how a driver drives…

…their initiations, their transitions, how aggressive they are on the track. 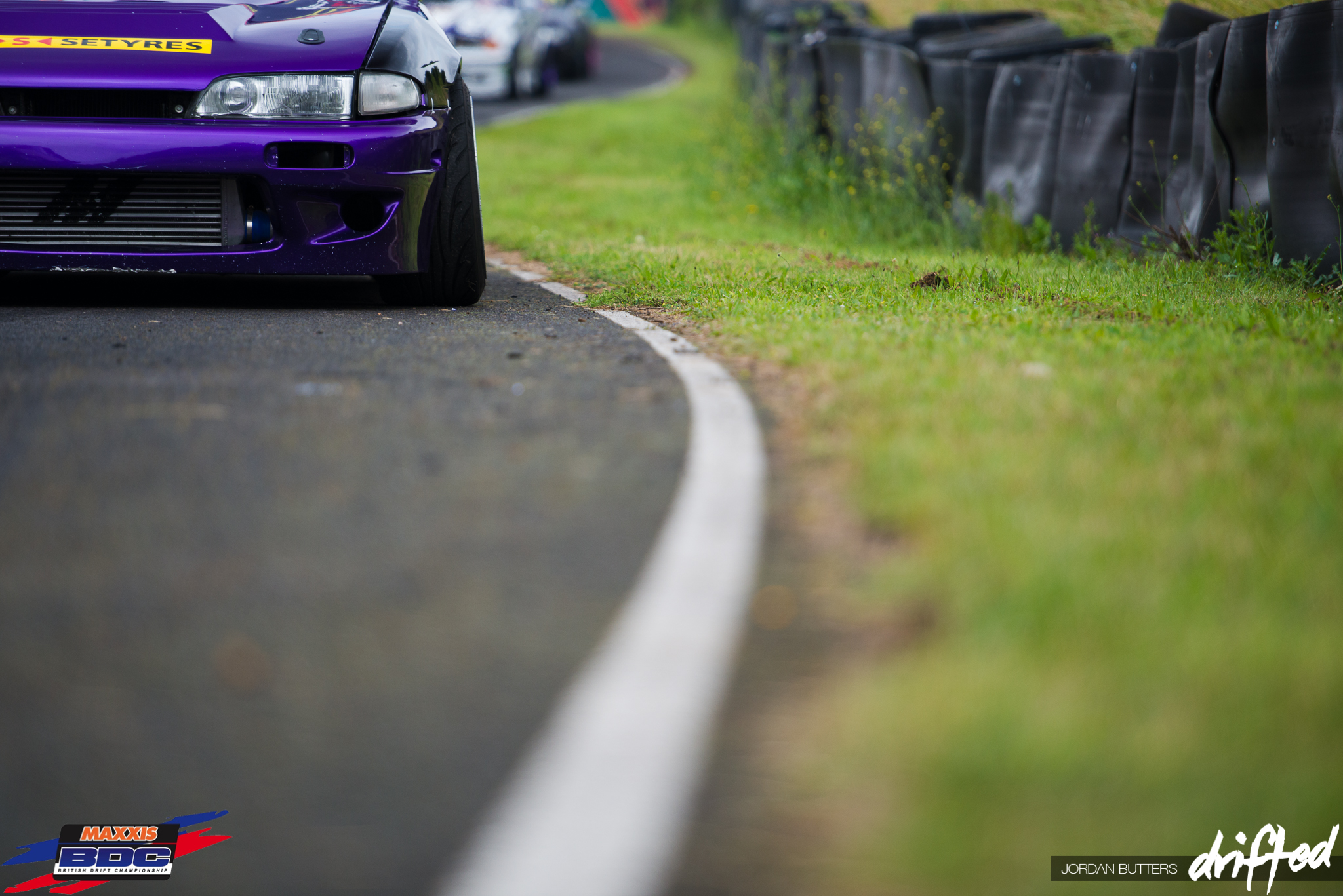 It covers the choice of car, and how the driver chooses to present it… 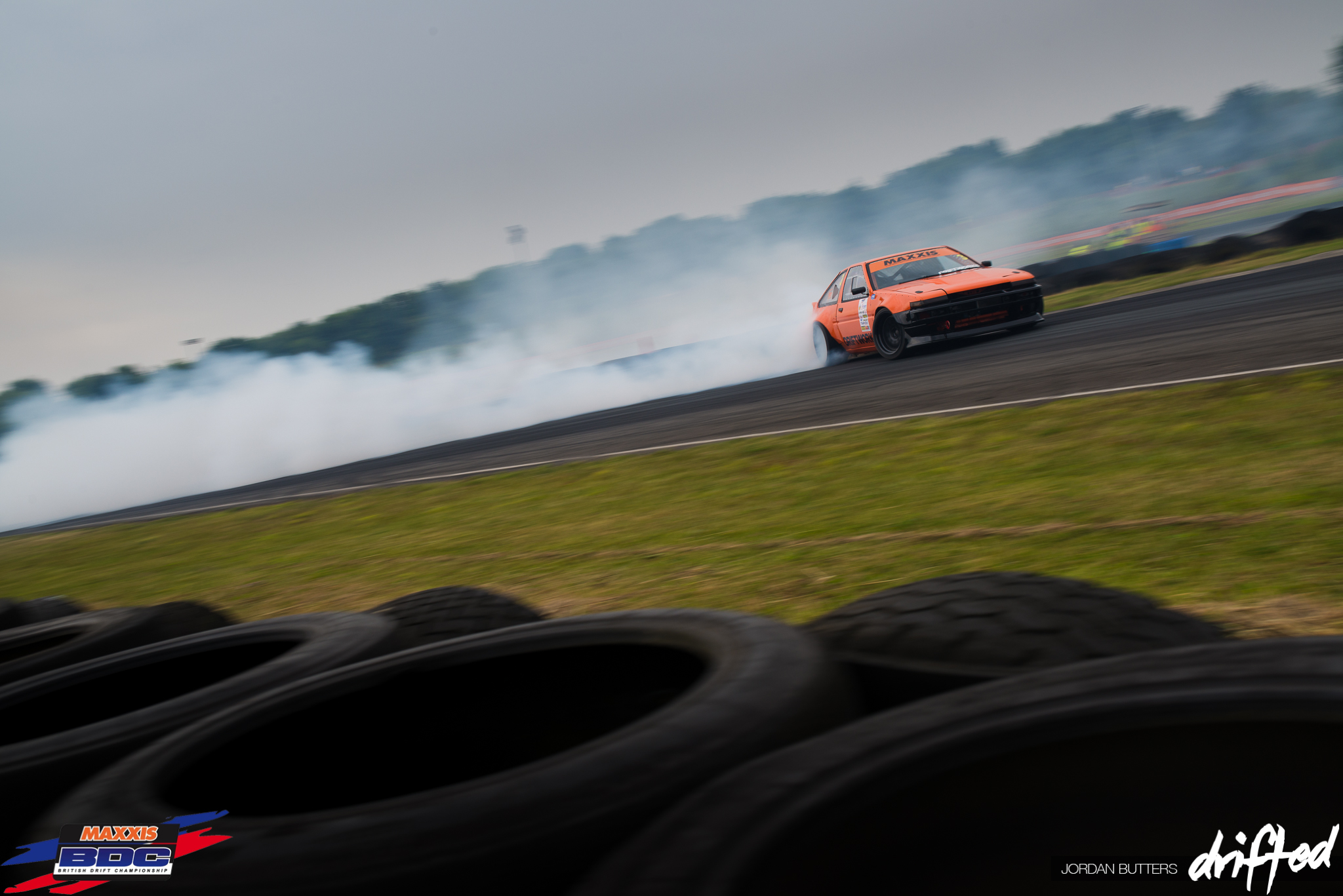 …everything from ride height, to wheel fitment, graphics and aesthetics.

It covers the drivers themselves too, of course…

…how they present themselves in front of media and fans alike.

After being involved in the sport for a number of years I find it interesting to observe how drivers interact with the outside world, and how that has changed drastically in recent times.

There’s no right or wrong way to present yourself of course, different approaches suit different drivers.

For example, Monster Energy athlete Stephen ‘Baggsy’ Biagioni knows exactly how to act in front of the camera and fans in order to remain ‘on brand’.

Pick any Monster driver from around the world and their signature style just ‘fits’ with the brand.

There are obviously huge differences in style when it comes to the cars of the BDC, too. In fact, more so than in any other form of motor sport, drifters have the opportunity to show case their personality through their choice of weapon.

From what type of car they choose… 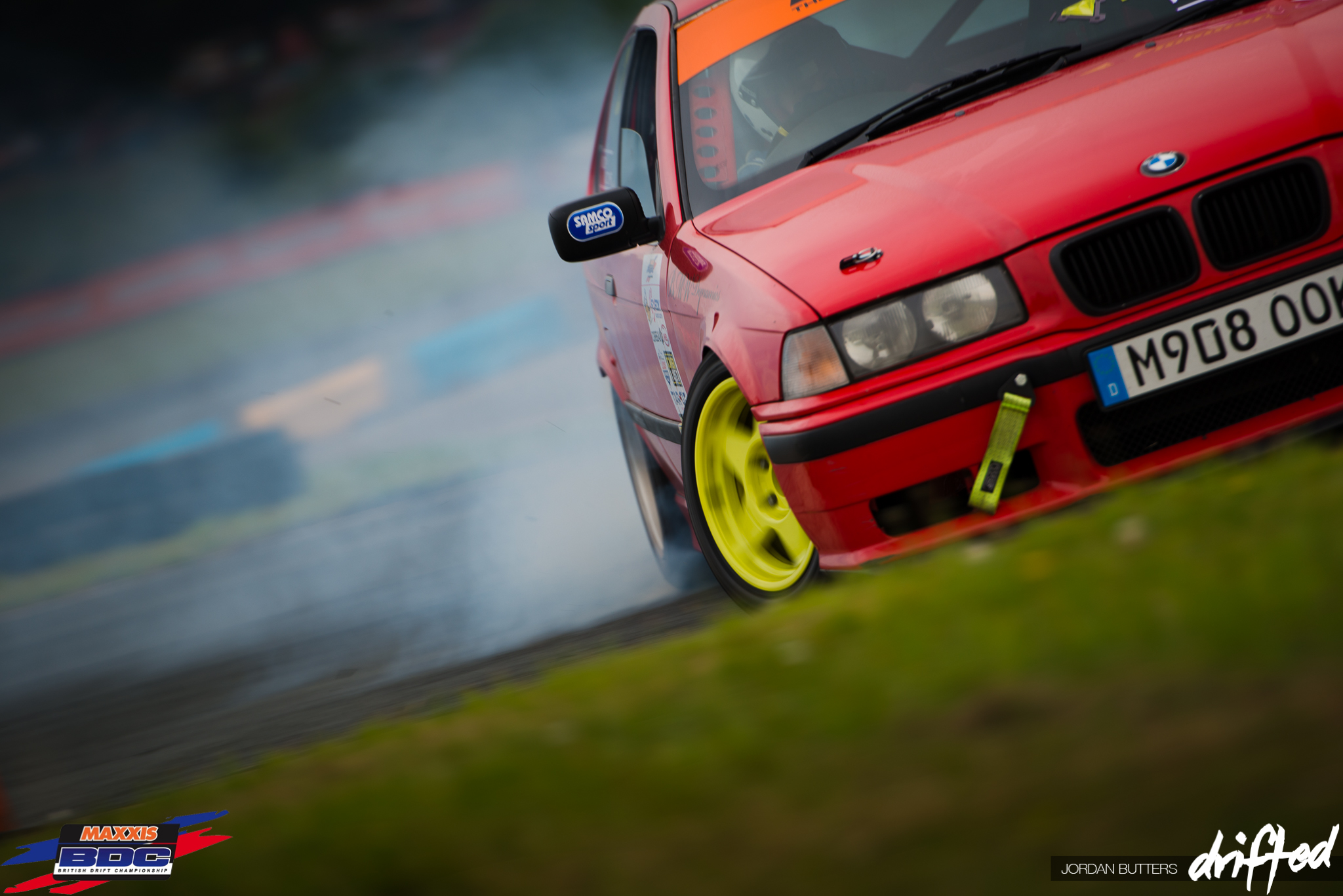 …to their ride height…

…and choice of livery or design.

There’s not many other series in which a 1976 RA28 Celica can go toe to toe with a 1000bhp Toyota Supra, stick it in the door and push it to one more time.

I was standing alongside Marc Huxley in the holding box after his and Mark Luney’s first two runs – one of Huxley’s first ever battles in this car (he only finished it the night before!) and Hux was literally shaking with adrenaline, rocking back and forth and screaming for the decision to hurry up.

This is drifting. It gets you pumped.

Sadly Hux didn’t win the One More Time, but he sent a message to the rest of the BDC field – this old car works, and I’m not afraid to use it. 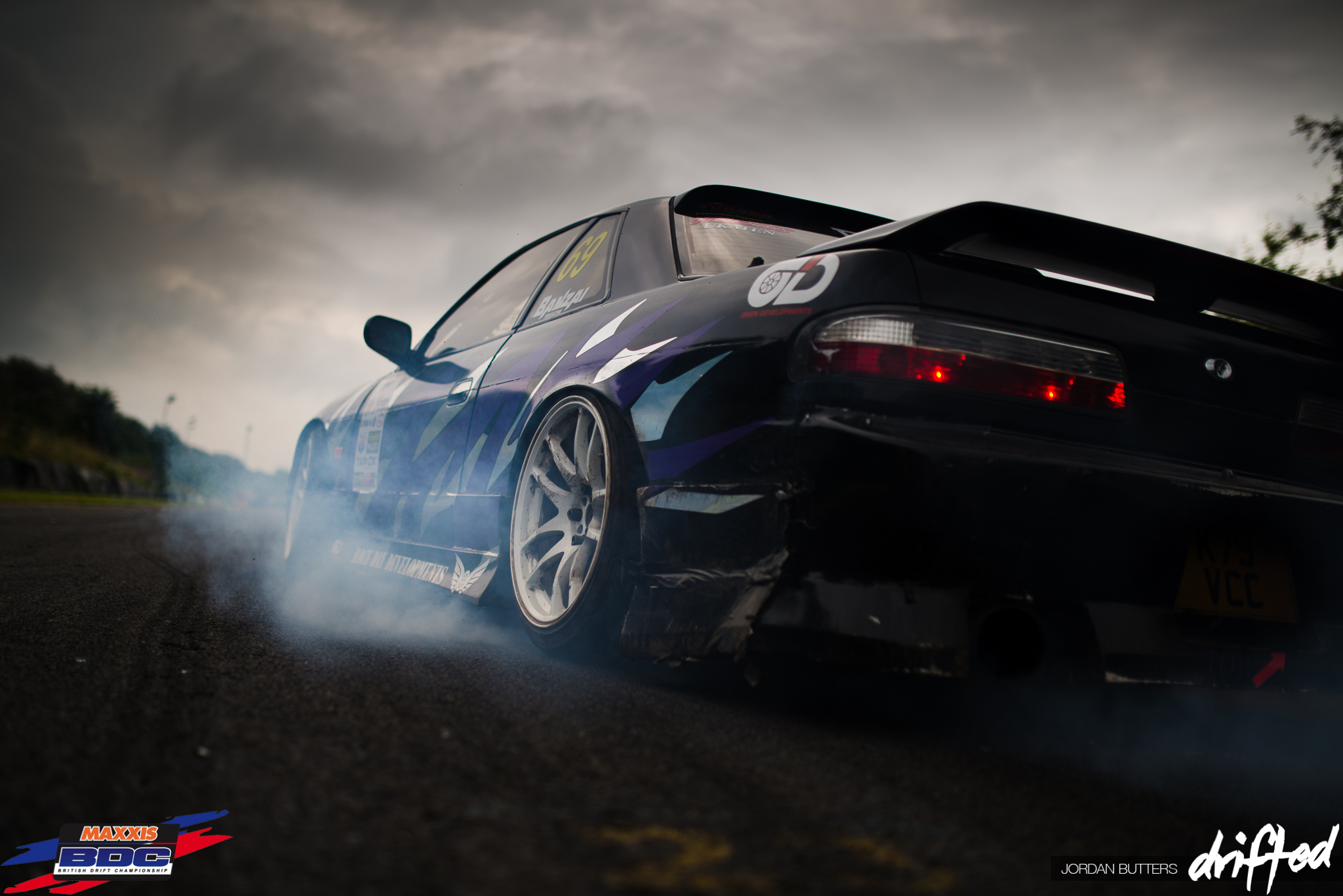 Jo didn’t have the best time at Teesside. A culmination of unforeseen mishaps before the event left him in the wrong frame of mind on the start line. 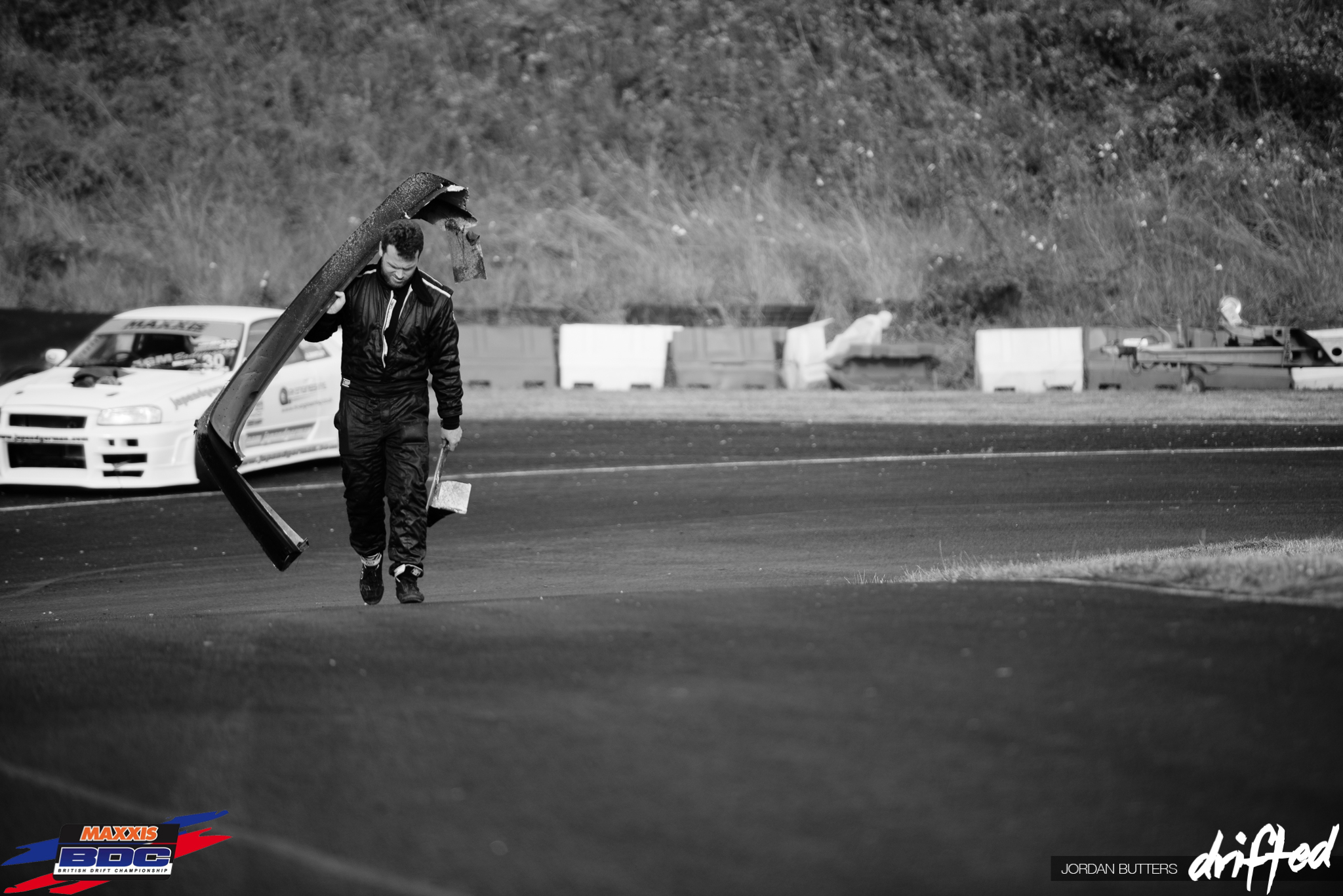 Sadly it showed, as he removed his Onevia from the crash barrier on the final turn.

Still, damage was superficial and he went on to give us one of the best battles of the weekend against William Rose in his bright red BMW compact. 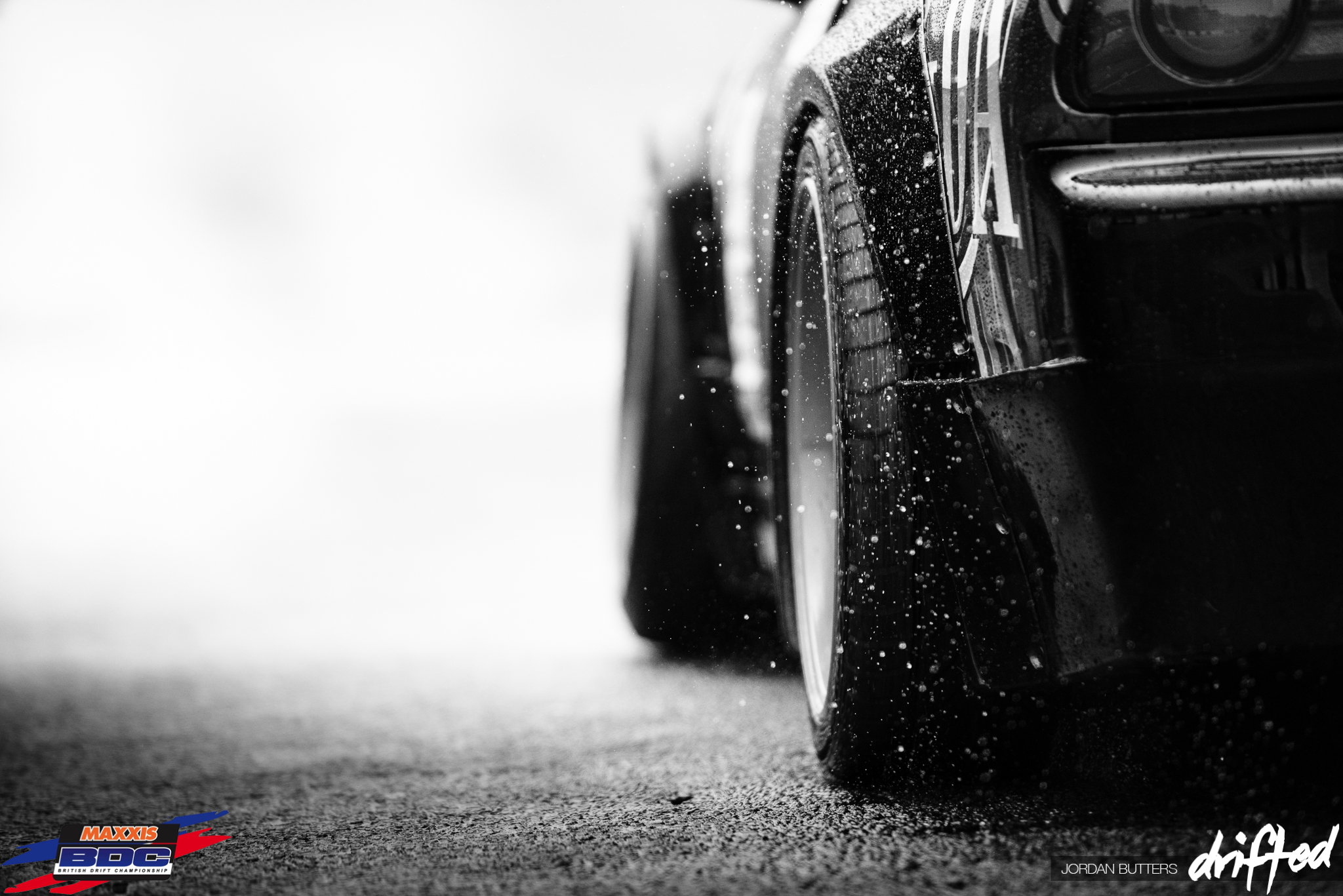 Despite the increasing move towards the competitive element in drifting, I’m glad that maintaining a sense of style is still prevalent within the sport.

Variety is the spice of life, so as long as the drivers keep on injecting plenty of personality into their builds, driving and demeanour, I’ll be happy to keep pointing my lens that way.

Stay tuned for our full low-down of the events that unfolded at BDC round three in a few day’s time.