My journey through the British Drift Championship – All over bar the shouting..

As we bring the BDC curtain down for the 2017 season what can we take from the revolution?

Earlier this year I outlined the radical changes of the series and how I thought it would play out. I described the hopes and dreams of David Egan.

His vision for all the drivers, the tracks and the series as a whole, but what conclusions am I to take from these? I suppose I should weigh up the pros and cons of the series without being too involved with the vision, but that wouldn’t be me.

From the start it all seemed an impossible task, to take a championship and completely redesigned it. To look at the scene as a whole and ask what is it? Where has it been? Where is it going?

I suppose we all have ideas that answered those three questions probably in great depth funnily enough, I didn’t. It would have been presumptuous of me to say I saw where it was going but I still don’t see the end goal just yet.

True it moved on a great deal, the format was still the same but it’s script was radically altered. Please don’t get me wrong I have loved every second of my role and for that I will always be thankful, even to this site for without their trust and foresight I wouldn’t have this voice.

Really, I should start at the beginning. I have written about grassroots and the progression of the individual, hell I have even been on a journey of self-discovery corny as it is, but I can personally say that the changes to the UK drift competition scene have radically altered.

I have to be real and measure this season against others and honestly, they are different, for the better to me, time will only tell but to most its certainly heading in the right direction, but has it reached it final destination, for me not quite.

I think David Egan honestly wants to deliver a package to all and that means true television coverage but to get that he would need 100% control of cars, timings and the track but at this moment there are too many variables.

Reliability was the key to this year but there were inevitable car failures which realistically you could say robbed the public of great battles unfortunately no one could predict or control. The way the drivers pushed this past season was always going to be a big ask.

It needed the drivers to be totally on board and that might be possibility with a new breed of drivers, new recruits so to speak but hard with the existing stalwarts of the BDC.

Let’s not get bogged down by negatives, let’s celebrate the positives too, loudly. The spectacle of the series brought a new interest to the crowds and I am sure a new level of competitor. 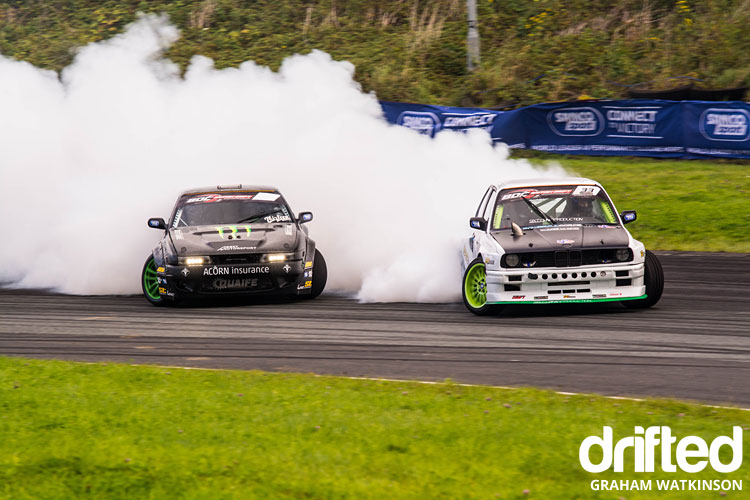 It was a testament to the drivers that so many progressed to the pro class when they only just made the leap from the feeder series. Rounds one through five certainly kept the interest and the expectation of all concerned and I am sure it has shown a whole new way of seeing the sport.

I certainly see it has proved an eventful first revised series for the promotion to work from and I am sure it was always designed to be that, a great first step to bigger and better things.

As I precluded earlier is it a definitive version, not for me I am afraid far from it. Like other motorsports for the fanbase it has to prove its worth both on and off the tracks. To set up a package of drivers and schedule so that all can associate with them.

It would hard to say to everyone who were the drivers? Where were they from? What do they drive and how powerful are they? These questions are the ones that would at least get a toehold on the ladder to mainstream coverage.

Everyone could say they know Formula One drivers, that’s a certainly different stage, the money the power and the coverage are well structured and that’s the way they work for them. David Egan has to ask himself the question what he ultimately wants the BDC to be.

Round five was my first personal view of bringing the fans down to the track and getting the drivers to bond with the crowd. A great sight to see, I applaud every driver for being open and upfront and just being approachable.

Fans in cars, photos and autographs bring them back to a level that this sport certainly needs to grow its fanbase.

For me it’s a very difficult picture to fully see. I can appreciate every minute detail that has gone into its delivery.

The genuine blood sweat and tears but not only the staff but their families and friends. Time sacrificed from the personal lives to follow a dream of one man. It’s a big ask but I see they are all as committed to the cause as is David.

If he can paint every driver now with that very paintbrush and they continue to maintain and exceed those very limits the light at the end of the tunnel would seem a hell of a lot closer.

Don’t get me wrong he has truly set out to take the series in a whole new direction and that he has and in a positive way. Like every new venture the path has to be visualised and now it’s time to deliver and hopefully bring others along for the ride.

Although this was my third season it was always going to be an interesting ride from start to finish, and one like a great friend I would welcome back with open arms.

From the words of an independent onlooker I sign out a happier and contented person. Thank for the ride, I was unsure it was a journey I wanted to take but now there is no place I would rather be.

Read more about the British Drift Championship at their website.