Finally, the new season of the Lateral Drift Championship has started. For the Philippines’ premier drift championship, the competition gets more intense as it follows a new format similar to the top racing series in the world: SATURDAY qualifying, then SUNDAY for the actual race of the qualifiers. Also, there are now two divisions for the championship, the Amateur Division and the Pro Division.

The 1st round of the 2010 Lateral Drift Pro-Am Championship kicked off on March 20, 2010. It is very notable too that one of drifted’s contributors, Struan Wallace, is a participant in the amateur division!

Saturday Qualifying was intense, as the pressure for the drivers to qualify for Sunday surmounts.

One of the nice looking cars in the competition is this S15 of RJ Obriedo (Pro division). 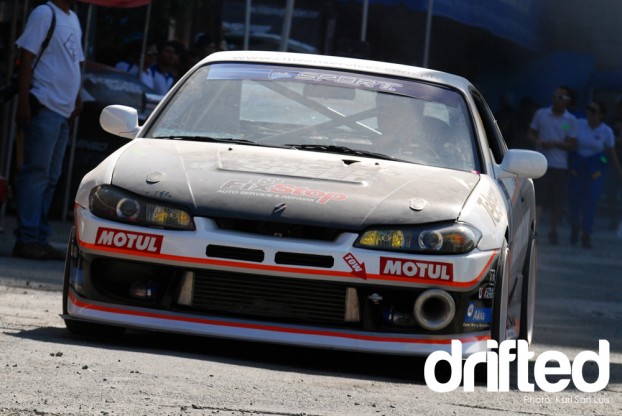 After Saturday’s qualifying, the 16 qualifiers for each of the two divisions are as follows:

As we can see, our very own Struan Wallace has qualified for Sunday, with a ranking of 11th among the qualifiers!

With the following matchups in place, the amateur division got started first. Unfortunate for Struan Wallace though, he got eliminated for the top 8 by Jayson Lao. Eventually, the final four for the amateur division with their respective qualifying rankings were: Mark Rosca (5), Ryan Agoncillo (3), Norman Agojo (9) and Pia Boren (2). Rosca would defeat Boren, while Agoncillo dispatched Agojo to advance to the finals. Agoncillo’s S13 though, was defeated by Rosca’s Nissan Cefiro A31 (Team Forced Speed - Teleserv – Kumho Tires). Norman Agojo of Team Goodyear came home in the podium with 3rd while Pia Boren finished with a very respectable 4th.

Here’s Pacho Blanco during the qualifying runs on Saturday.

Unfortunately for Brian Revilla, he would not be able to advance in the final four with his maroon S15.

Rodriguez advanced to the finals by defeating Blanco’s mighty 400 plus horsepower S13. Awaiting Rodriguez is Agregado, which has eliminated Perez for the victory.

Rodriguez would take the win from Agregado, while the last spot of the podium went to Alex Perez. Blanco went home with a final four finish on hand, after finishing Round 1.

The race though, was not without controversies. Gio Rodriguez was given a reduction in points as only advancing to the final four because of his violation of the spare car rule. Similarly, Choachuy and Agregado did not earn championship points and instead was handed out his points for being a qualifier in the top 6. The latter had an overtaking maneuver with Atoy Llave was unsafe driving practice which violated the rules for overtaking.

One of the stories of the Round 1 were the cars. Atoy Llave, the owner of the very famous A-toy Bodykits, had one of the unique cars in the competition, a German one: Mercedes-Benz 190E.

The following round is on April 17/18, so please support Struan Wallace of drifted! Stay tuned!