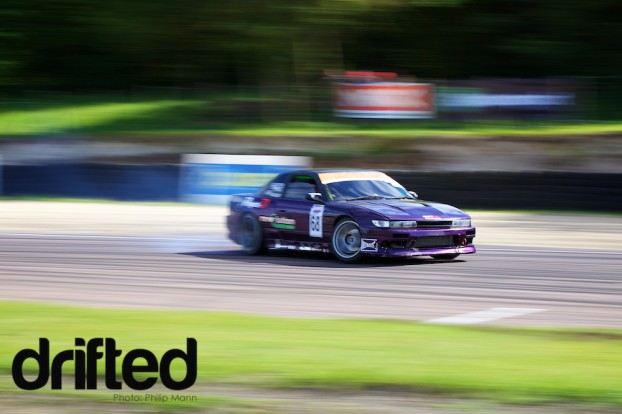 The weather men had predicted it, people had been talking about it and you could see it in the sky.

The clouds rolled in, the rain fell and it make a tricky track even more difficult. 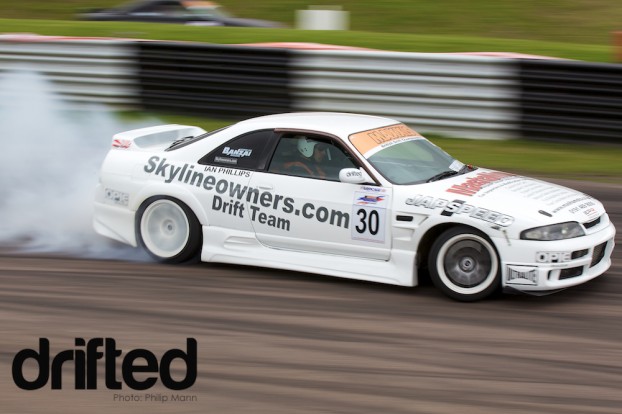 The semi pro’s came out for their qualification runs after the lunch break. The session started out dry with the drivers picking up where they left off. Ian phillips in his R33 was leaving smoke trails that would put some of the pro class drivers to shame.

But the dry conditions were short lived, Noel Phipps who had been the first to meet the gravel in the morning was the first to slide off when the rain came. As the rain fell the drivers entries into the first corner became slower as they refrained from copying Noel. 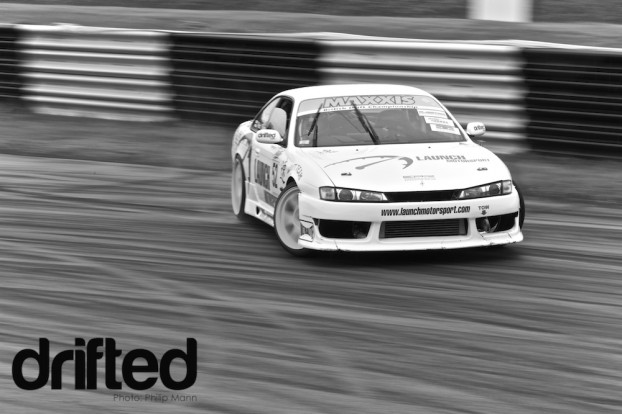 Rich Tovey was pulling some good angles out of the first corner and out of the hairpin, missing the clipping points, but looking like he was in a video slow-mo. It made me happy as i stood in the rain.

The rain started to clear and the track started to dry out again. Hats off to John Glaster who started to dirt drop on the entry to the first corner, after the rain it would of been so easy to get that move wrong. John pulled some good runs to qualify in 4th place.

Round 2 winner from Llandow Ian Phillips showed that he was not put off by the changing conditions by qualifying in 1st place.

Round 1 winner Jordan Patton had some good runs to put himself in 6th. 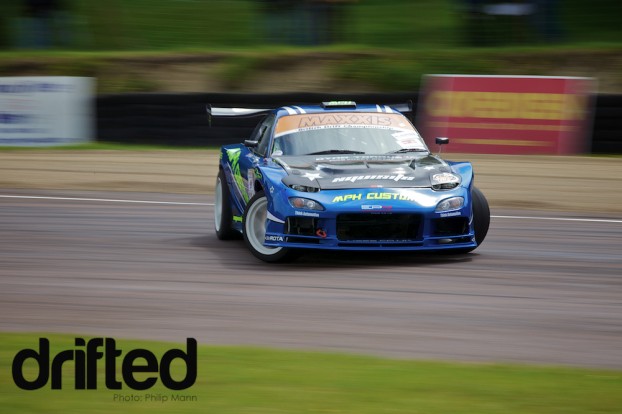 Matt house’s V8 powered RX7 was looking and sounding mean, but unfortunately missing out on a place in the top 8 by qualifying in 10th.

The Drivers going through to the top 8

John and Mark were first out of the gate. John pulls a 7-3 advantage in the first run. Mark comes back stronger in the second run to take it 6-4, but John goes through. 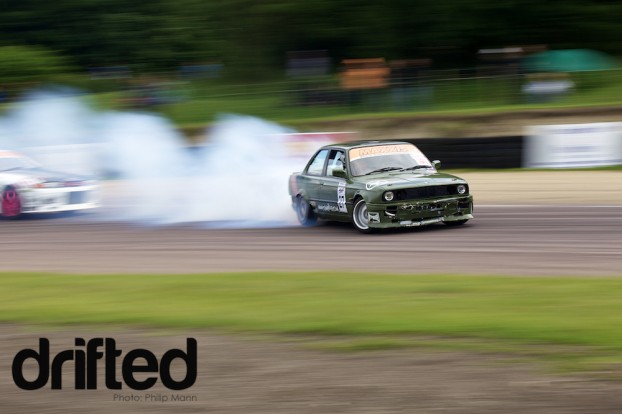 Sam and Martin are out next. Sam takes the first run with a 7-3, but Martin comes right back at him to take a 7-3 in the second run. One more time is called as Martin uses the 5 minute rule to go and repair a puncture. 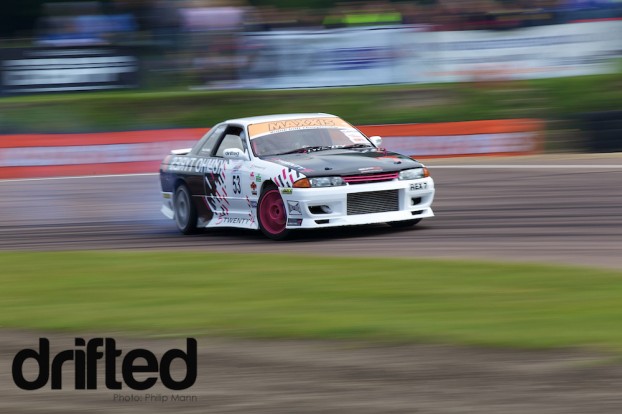 When they come back Sam takes a 7-3 advantage in the first run, but a poor first corner on the second run gives Martin a 8-2 advantage and he goes through to the top 4. More bad luck for Martin, his car loses one of the rear arches and shreds his tyre. He calls 5 minutes to go and repair it. 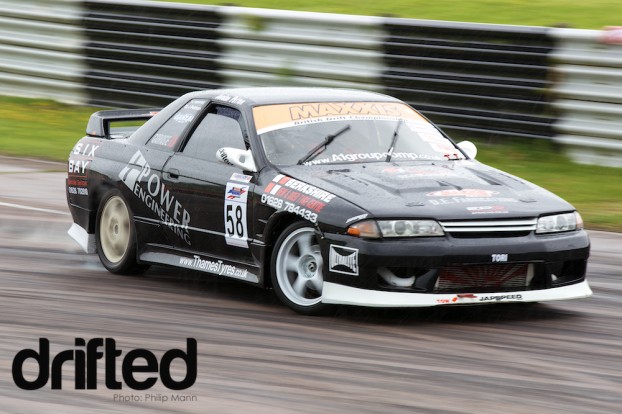 Phil had to compete against round 1 winner Jordan in his run. Jordan having a good first run, taking a 6-4 advantage over Phil. But on the second run Jordan straightens a few times, Phil takes the advantage 7-3 to go through to the top 4.

Last up is Ian Vs Andy. It had to happen at some point, Andy takes a little trip into the gravel at the 3rd corner, luckily managing to drive out, but giving a 10-0 lead to Ian. Andy’s second run was unfortunately not much better. Straightening several times means that Ian gets an 8-2 advantage and goes onto the top 4. 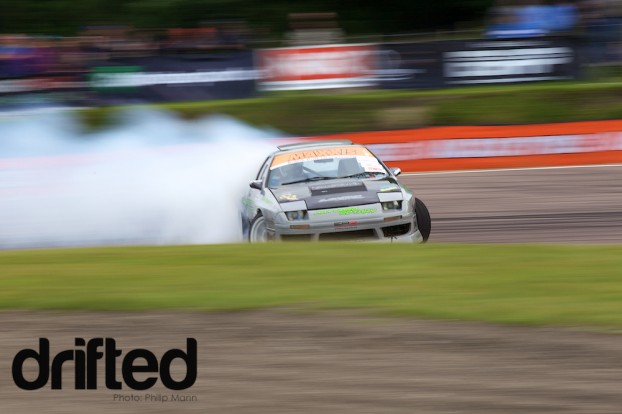 The first run between Ian and Phil was a difficult one for the judges to call. Both drivers starting out well but then making mistakes in their runs. Phil got the 6-4 advantage on the first run as Ian straightened for the final corner after getting the wrong line out of the hairpin. But Ian manages to pull it together for the second run. A strong run with loads of smoke gives Ian a 7-3 and puts him into the final. 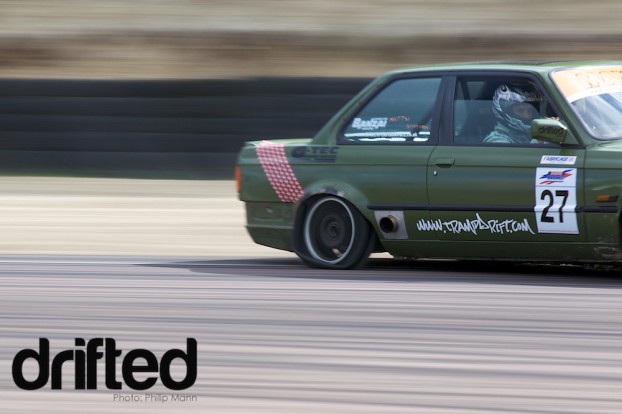 The 3rd place battle was a hard fought affair for Martin. A rear puncture means he cant get the lines correct for the corner. But hats off to Martin who still held an impressive drift out of the final corner. Phil has a trouble free run to take 3rd place. 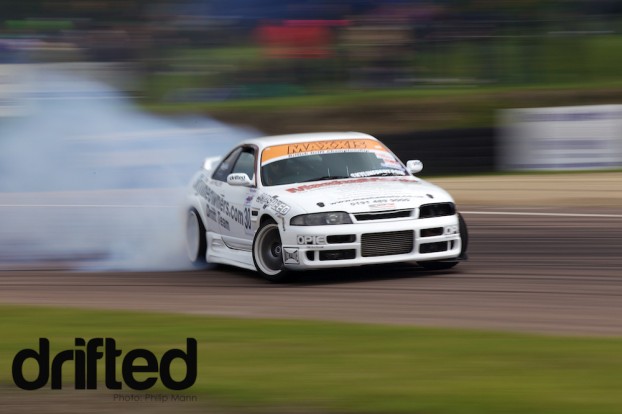 The final would be a highly contested affair between Ian Phillips in the Team Skyline Owners R33 and John Glaster in the Team Scream PS13. Ian was looking for his second win of the season, with John Trying to claim his first. John initiates into the first corner with another small dirt drop and runs his inside wheel along the curb at the first corner. Ian has a good run but straightens a few times.

Both drivers have good second runs, but it is John that claims his first win of the season. 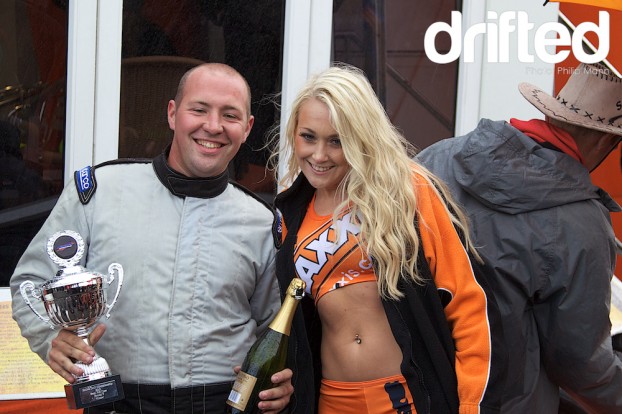 Well done to all the semi-pro drivers who put on a fantastic show for the crowd, and the people from the FIA who were also watching.