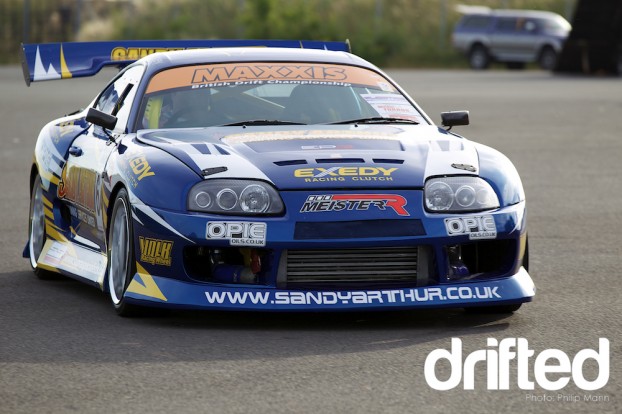 After the fantastic drifting from the semi-pro’s it was time to move onto the pro’s. Would they be able to put on as good a show as the semi-pro’s?, how would team Driftworks perform after last weeks damage?, and who would stand aloft the top step of the podium? 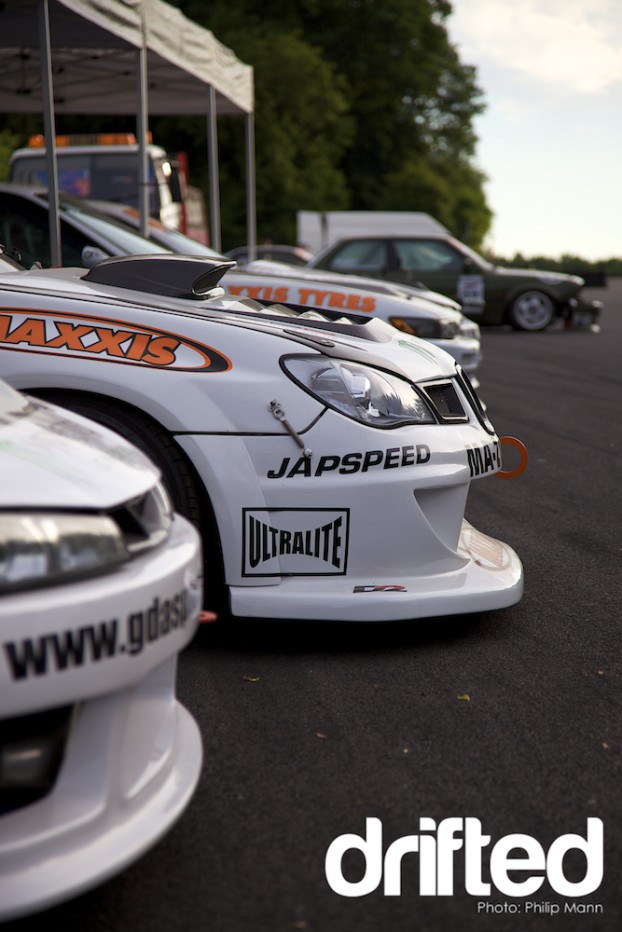 The day started early for the driver’s, but it was going to be a long day as the event was not scheduled to finish until 8pm. The pit lane was a hive of activity, trailers being offloaded, cars being checked over and drivers getting themselves ready for the day ahead. 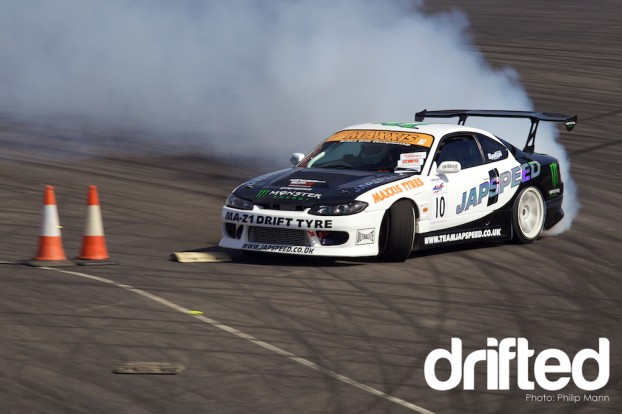 10am came round and it was time for the pros to go out for the first time. Paul Smith on his first practice hit the first clipping point perfectly with loads of smoke and great angle. The fist corner was perfect for leaving huge walls of smoke, Greg gush, Simon perry and Mark Luney were all leaving huge trails of freshly killed rubber behind them.

After becoming last years BDC champion Stephen Biagioni has not been having a good 2010 season. After having numerous car problems so far this year he had little seat time in the Team Japspeed Subaru. They managed to get the car up and running so that Baggsy could get some qualifying runs in. He drove well but just missed out on getting into the top 16, getting 17th. 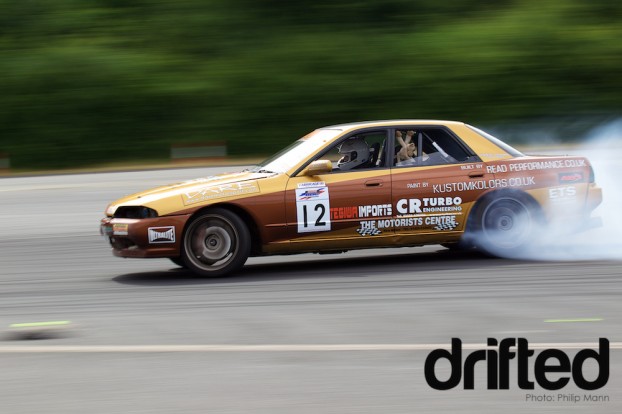 Julie Robinson was looking good again, but she qualified in the worst position. She qualified in 16th, meaning she would have to go up against the first place driver.

And for the second round in-a-row it would be the MK2 Escort of Declan Munnelly, proving that you don’t need turbo’ed Nissan power to get sideways. 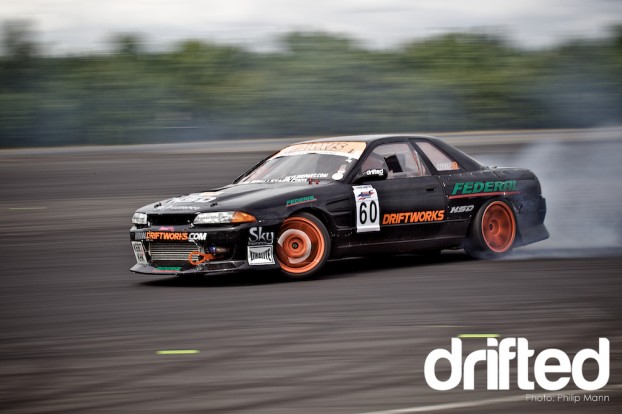 After last week crash at JDM Sunderland it was good to see both of the Driftworks cars fixed. Bon Bon managed to put his 1JZ R32 into second, and Phil Morrison grabbed 9th. 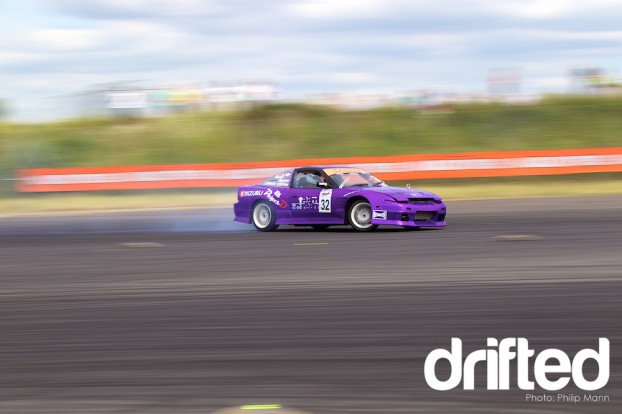 Ashley Stevens had a tough day in the heat. In practice he broke his gear box, it was not looking good for him until Danielle Murphy came to his rescue with a spare gearbox. He managed to get it fitted in the heat, but only to qualify 8th and having to go up against Phil Morrison in the battles.

The top 16 was a hard fought and exciting affair,  twice the judges called “one more time”, and even a further OMT after they still couldn’t decide. 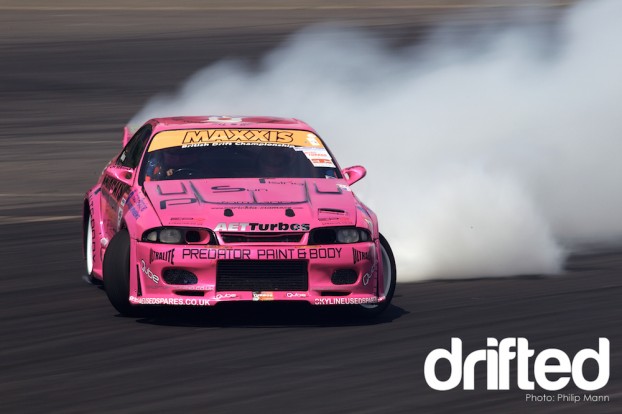 The first pair out were Martin Richards and Simon Perry. Perry got a slight 6-4 advantage after the first run. Sadly Martin had some technical issues with the car and the 5 minute rules expired on the second run, Simon moved onto the top 8. 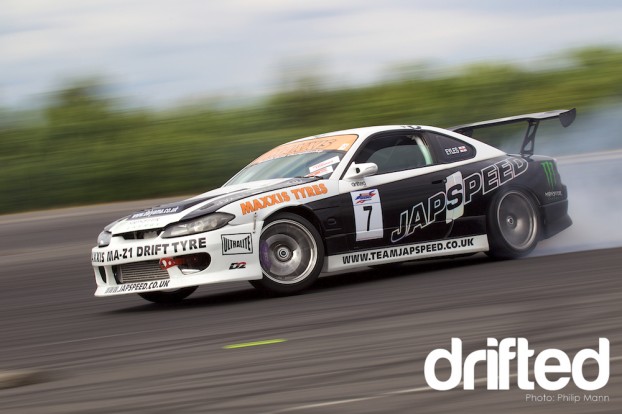 It was an all Team Japspeed battle next. Danny Eyles was up against Shane Lynch. If it was judged on sound then Shane would win no problem. The teammates drove well, but Shane went through with a 6-4 and 7-3. 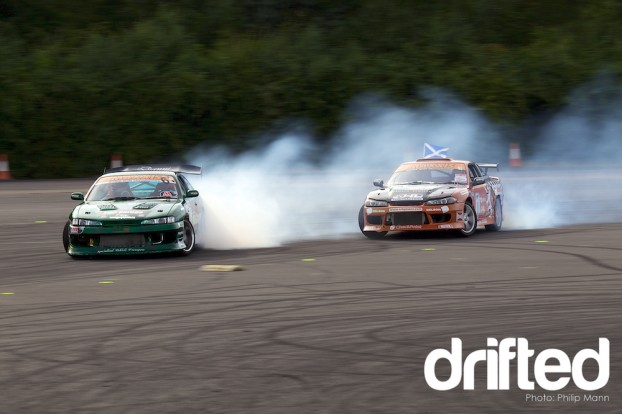 There was more car swapping going on in the Team Falken camp, Matt Carter was borrowing Danielle Murphy’s S14a for his battle against David Waterworth. David drove well in the first run to get a slight 6-4 advantage over Matt. He then spun in the second run and Carter moved on.

Bon Bon went onto the top 8 after his runs against Vince Noott. a 6-4 in the first run and a 7-3 in the second.

It was very close between Mark Luney and Gav Cummings. Luney got a slight 6-4 advantage from the first run, but it was enough to go through after the 5-5 in the second run.

And onto the most exciting drifting of the day, Paul Smith Vs Grant Laker. The pair had been looking good all day, Paul had had the track nailed from his very first run. On the first run Paul got the advantage with a 6-4. On the second run the 6-4 went to Grant, they would go OMT. Then the exact same thing happened again with the same scores. 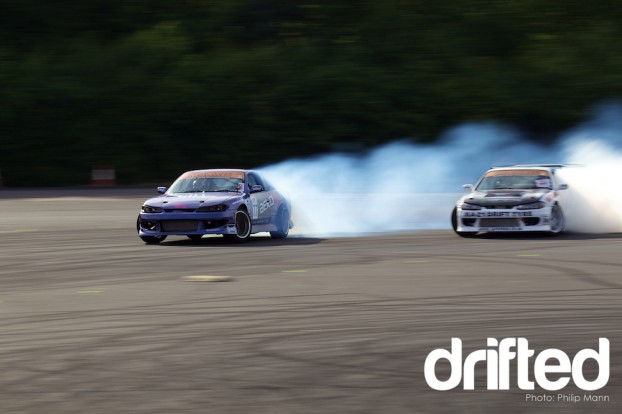 They would go for a second “One more time”. This time it went in Paul’s favor, a 6-4 advantage in the first was then followed by a 5-5 in the second run. Well done to both drivers. 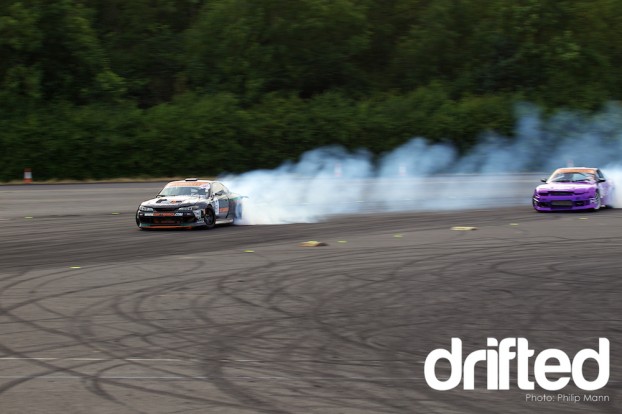 The next battle would also be hard fought. Ashley Stevens and Phil Morrison would draw in their first 2 runs. When they went OMT Phil would emerge victorious, a 7-3 in the first run and a spin from Ashley in the second would see him move onto the top 8.

Last up would be Declan and Julie. The Escort would get a 7-3 advantage in the first run. Julie would have a better second run, but the 5-5 wasn’t enough for her and Declan went onto the top 8.

Shane would meet up with Simon in the first battle. Simon got a 7-3 lead in the first run, but in the second run there was very nearly a crash. Shane Straightened badly on the first corner, almost going into the back of Simon’s car.

Matt Carter was up next against Bon Bon. The first run went 7-3 to Bon, Matt had a poor angle round the first corner. Bon called 5 minutes but unfortunately had to retire. Matt would meet Simon in the semi finals.

Paul Smith would continue his fantastic driving in his battles against Mark Luney. It went 6-4 to Luney in the first run, but then Paul pulled it back in the second, it would go OMT. Paul couldn’t quite match Mark’s speed, line and angles and 2 6-4’s would see Luney into the semi’s. 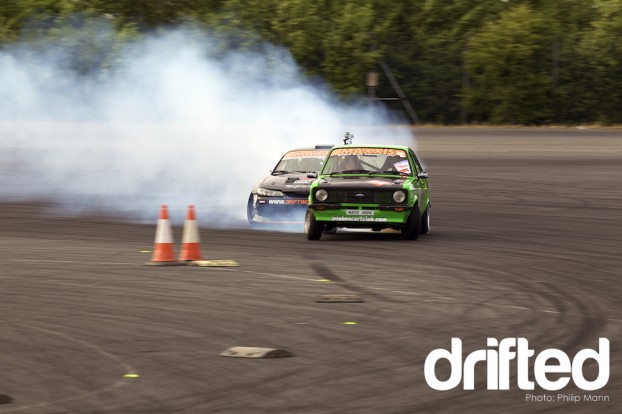 Phil Morrison drove superbly in his runs against Declan. Phil was right on Declan’s bumper when following and took a 7-3 into the second run. The difference in power was obvious in the second run, coming out of the third corner Phil put his foot down and opened up a lead, it would go 6-4 to Phil.

Simon Perry would be up against Matt Carter in the first of the semi finals. Simon would gain a 6-4 advantage for the first run. On the second run Matt spun and simon was onto the final. 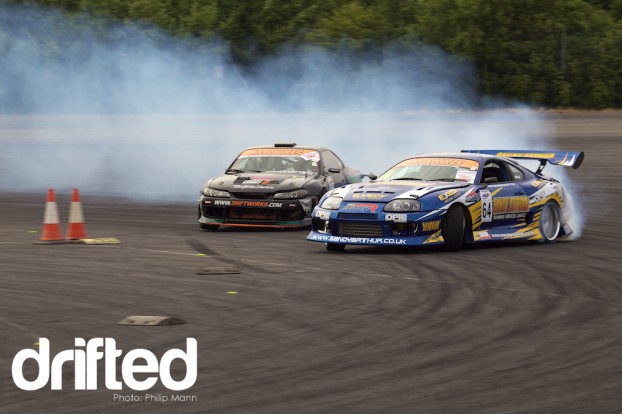 Next up was Mark Vs Phil. It was very close between these two. 2 runs of 5-5 would see them running again. We then had another run that was scored 5-5. On the next run Phil would leave the track slightly and straighten on transition, giving Mark the 6-4 he need to progress onto the final. 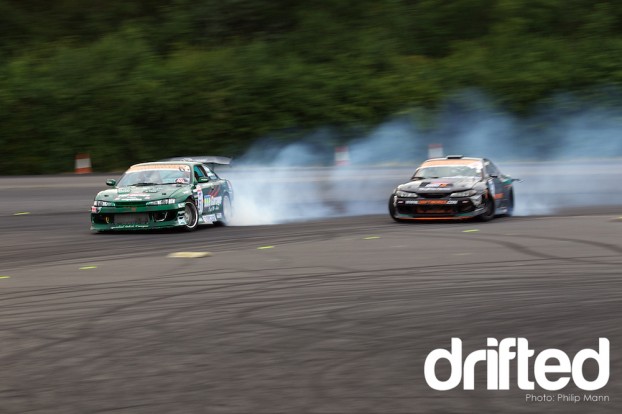 Matt had done well to get this far in a borrowed car. He drove brilliantly in his first run against Phil and got a 7-3. Phil then called 5 minutes and left the track. He returned with only milliseconds to spare. Phil drove well trying to pull back his disadvantage from the first run. But it was not to be, only getting a 6-4. Matt gets third. 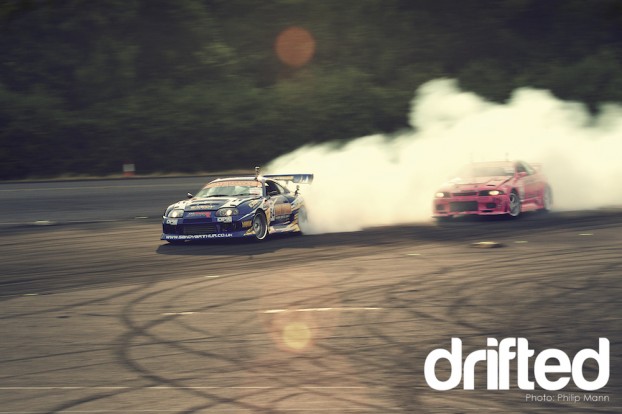 The last runs of the day would see Mark against Simon. The pair were inseparable in the first to runs, the only way the judges could score was 2 5-5’s. We would get to see our final OMT of the day. Mark would be scored 6-4 in both of the runs and claim the top step of the podium.

Well done to all the BDC team and drivers for putting on another awesome event. I can’t wait to come back to the launch pad next year.

A few of the photographers at these events try to take pictures with very blurred backgrounds, we don’t always get it right, but when we do it looks like this.