Saturday morning at 6.30am i’m at the launch pad at Donington ready for round 4 of the British Drift Championship. At this silly early time it is already 18℃, it’s going to be a very long and hot day. 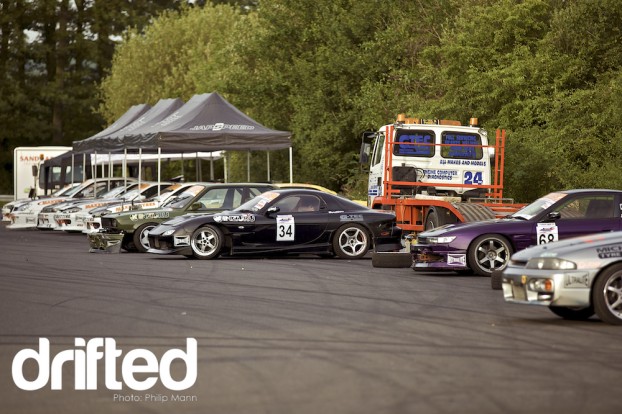 A quick walk around show that a few people slept in their cars at the circuit, sleeping in an RX7 is something that i hope i never have to do. But the team skyline owners have a set-up to be envied, a big pink bus with everything you could need to get ready for a days drifting. 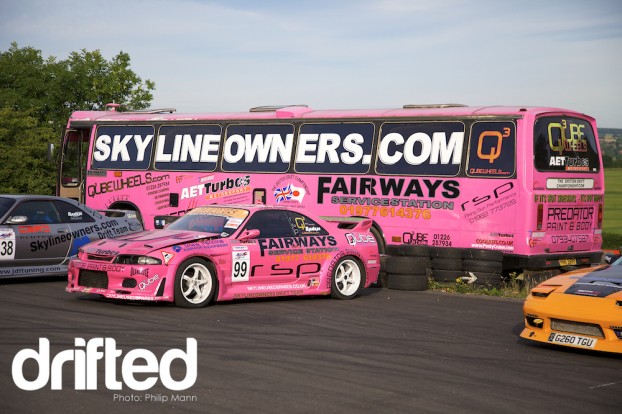 Roll onto 7am and the drivers start coming in thick and fast. Everyone was smiling but looking tired.

Their were a few of drivers that i didn’t think would be at the event after the crash’s that have plagued the last month in the drift word. The Driftworks team had managed to get both of their cars repaired after the smash at JDM Sunderland, and Mike Cooper was given the keys to Alan Green’s Team Falken S14.5 after not quite getting his reshell ready in time. 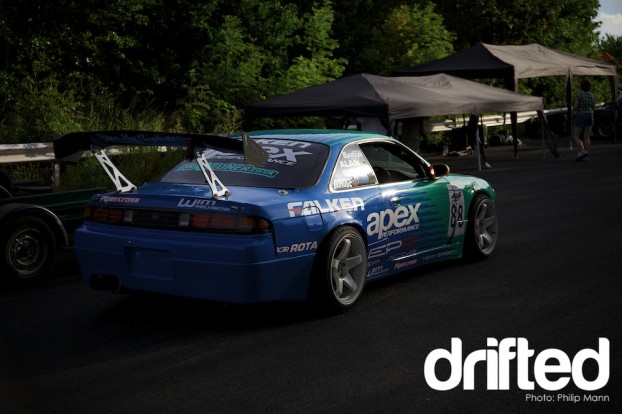 The track layout and the restricted media access to the infield would provide a challenge for the photographers.

The practice for the semi pros kicked off at 9am. A few of the drivers struggled with the track layout at first, but it didn’t take long before some of the drivers were leaving big smokey trails round the launch pad.

Martin Griffiths in his E30 was looking very good, making a wall of smoke around the first corner.

Team scream’s Andy Redmond and John Glaister were both thinking positive, being the first pair to go out twinning, good practice if either driver would go into the top 8 shootout. The runs looked good from my vantage point on top of the Maxxis truck, with the pair keeping close to each other as they tried to hit the clipping points.

The qualifying was exciting to watch, a few of the drivers have had bad luck recently, a few drivers have even dropped out now, but the ones that remain but be fighting hard to get into the top 8.

After having his car written off at the last round, Mike was showing the others how it was done. He borrowed Alan Green’s S14.5 and put a couple of blinding runs in to grab the top qualifying spot. 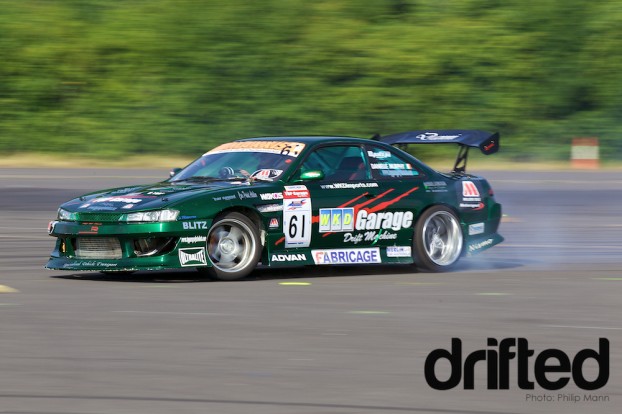 Danielle Murphy was having good luck as well, putting her S14a in third. 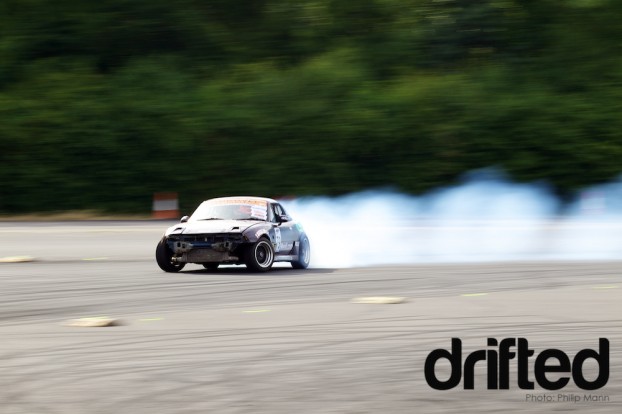 Jamie Kenyon in his SR powered MX-5, missed Lydden hill because of problems with the car, he came back and had strong runs all day and got himself into the top 8.

Ian Phillips was putting on a good show for his new sponsors, putting his new Neuton tires to good use to grab second. 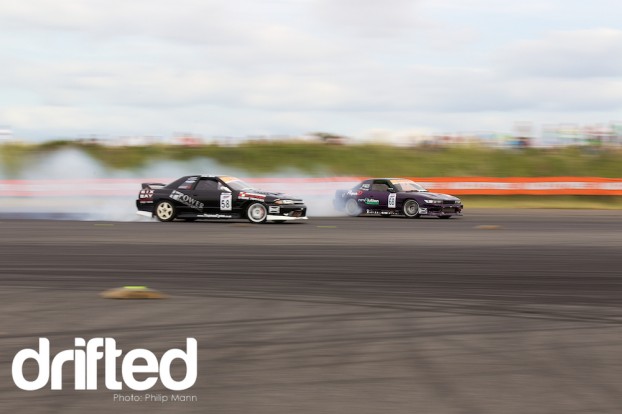 First up was the battle between John Glaister and Jordan Patton. Both drivers have wins under their belts now this year and would push each other during their runs. They both had a good run and a bad run, but Johns slight advantage from the first run meant he was through to the semi finals.

It was an all irish affair for the third battle. Even though Dani was looking strong all day, she spun in the first run and got a “Big fat zero”. She had a good run second time round but the 7-3 win was not enough and Finn was through. 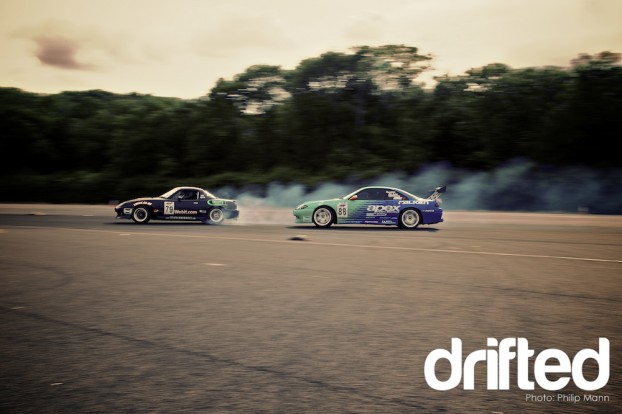 The hardest fought battle was between Mike Cooper and Jamie Kenyon. Two equal runs from the drivers meant that the judges had to get them to run “One more time”. It was still close in the first run, going 6-4 to Jamie, but mike pushed too hard in the second run, spinning and putting Jamie through to the Semi final.

Up until this point John Glaister had been drifting really well, but he spun on his first run against Ian. Ian would then pull a 7-3 advantage in the second run and go onto the final.

The semi final between Finn and Kenyon was and easy one for Finn. Jamie span on both of his runs. Finn was through to the final against Ian, and Jamie would battle John for third.

It was battle of the purple cars for third place. Unfortunately for Jamie, he spun in the first run and handed John a 10-0 lead going into the second run. Jamie matched John in the second run, but John kept it together and bagged himself third position.

And onto the final.

It was a daunting challenge for Robert Finn going up against one of the smokiest cars in the Semi-pro class. Finn drove hard in the first run, but Ian runs was slightly better and took a 7-3 advantage into the second run. Ian followed Robert for the second run. Robert unfortunately spun at the hairpins, Ian powered out of the final corner, arm in the air after claiming his second win of the year.

The hard charger award for the semi pros went to Jamie Kenyon, i was glad to see the MX5 back in action.

Well done to John Glaister for getting his second podium in 2 rounds was a fantastic result for himself and Team scream.

Robert Finn didn’t get the win like the big sticker on his rear wing said, but he did well on his return, getting a second place after missing two rounds.

Taking the top step was Rd2 winner Ian phillips. He put his Neuton tires to good use during the day, giving them massive amounts of abuse and smoking the whole track out.

The drivers have just one more round in which to battle it out, where will you favorite driver finish at the end of the 2010 season. Make sure you don’t miss the Team event which is being held on the 6th-8th August at Norfolk drift arena.

I would like to say a thank you to Andy Redmond for giving me a lift to the event, Thanks dude.