Continuing coverage from this year’s D1GP Kickoff from Tokyo Auto Salon, here’s a look at the tsuiso (tandem pair) battles from Saturday’s event. 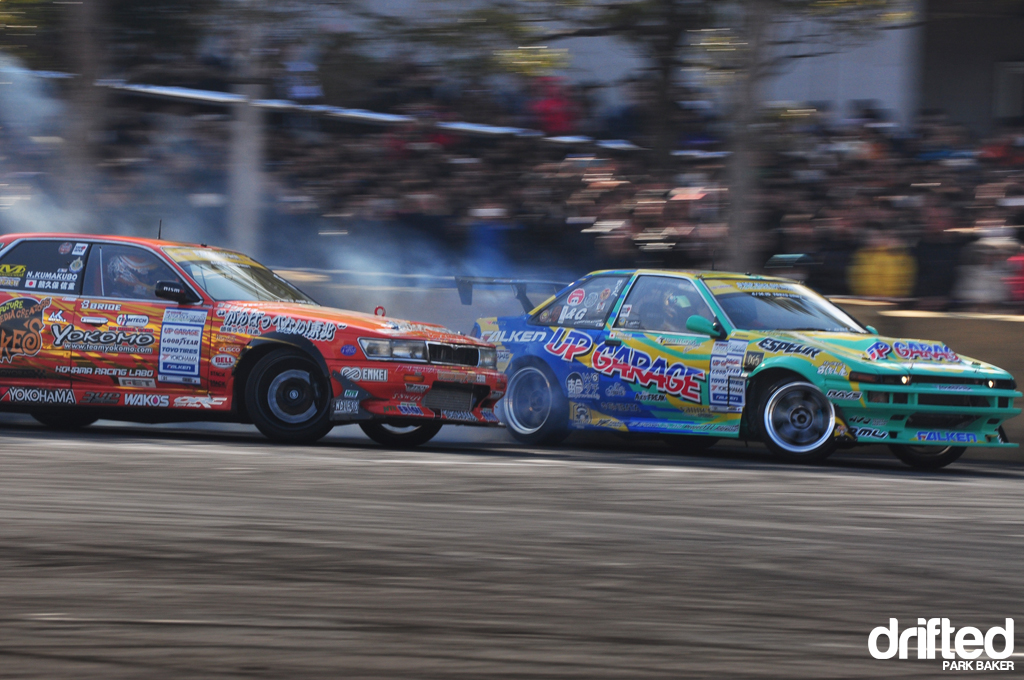 Kawabata (RPS13) gets in a quick lap before taking on Suenaga in his FD3S RX-7.

Suenaga prepares for his first-round run.

As per the usual method, the drivers had two runs in each round, one leading and one chasing. 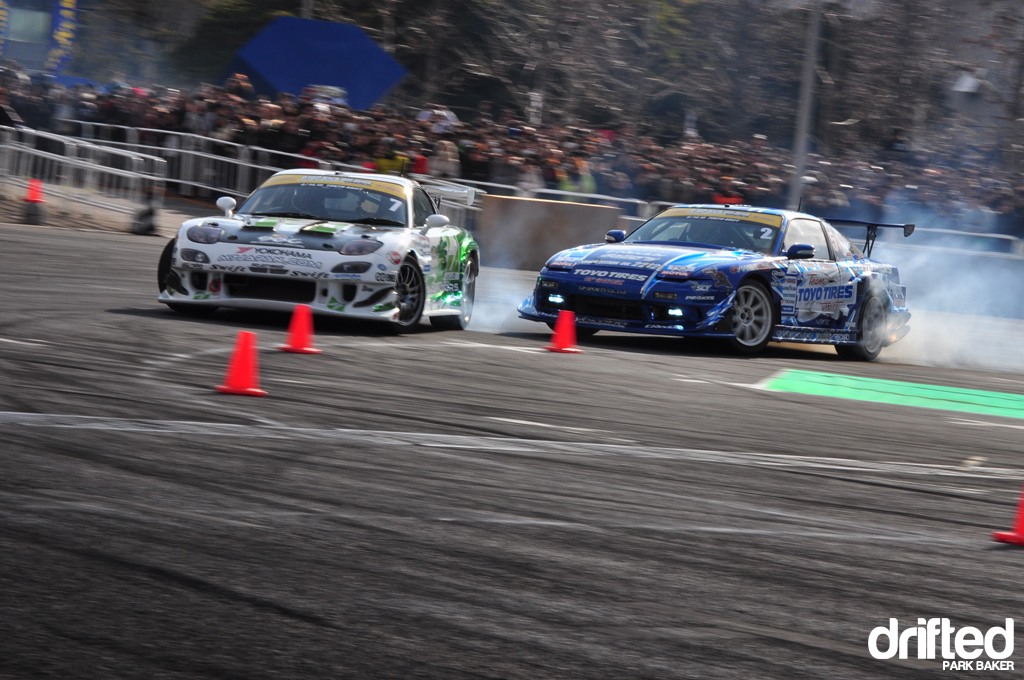 Kawabata (RPS13) took this round and advances.

The fact that it was only an exhibition didn’t mean anything to the drivers, who were pushing it just as hard as any normal event. Here, Kawabata takes a celebratory run as he moves on up the bracket. 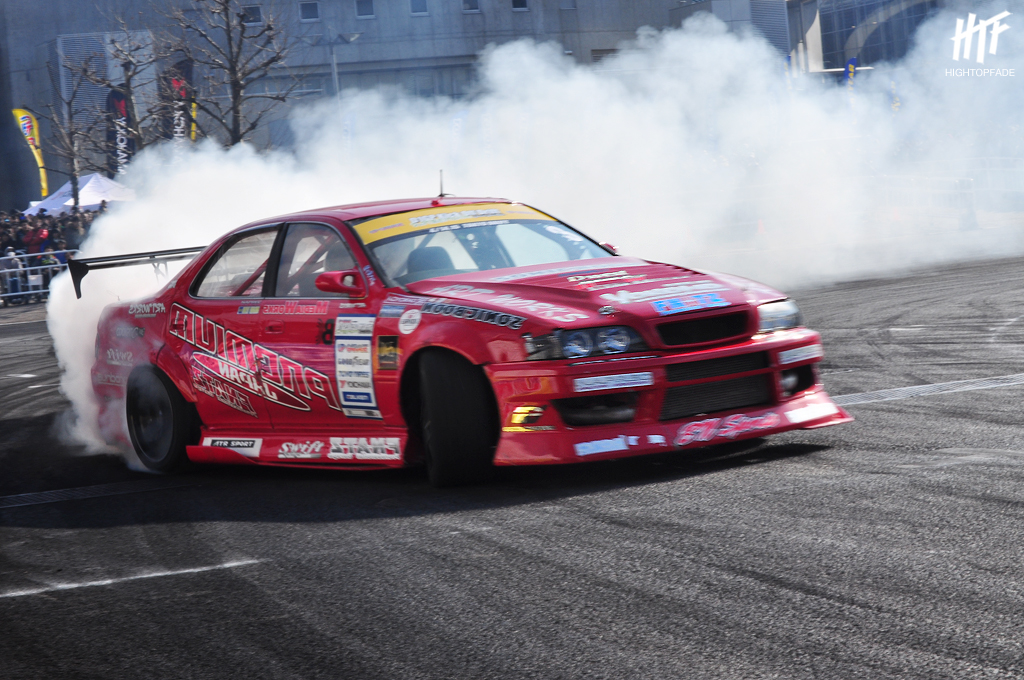 Next up was Daigo Saito in his JZX90 Cresta… 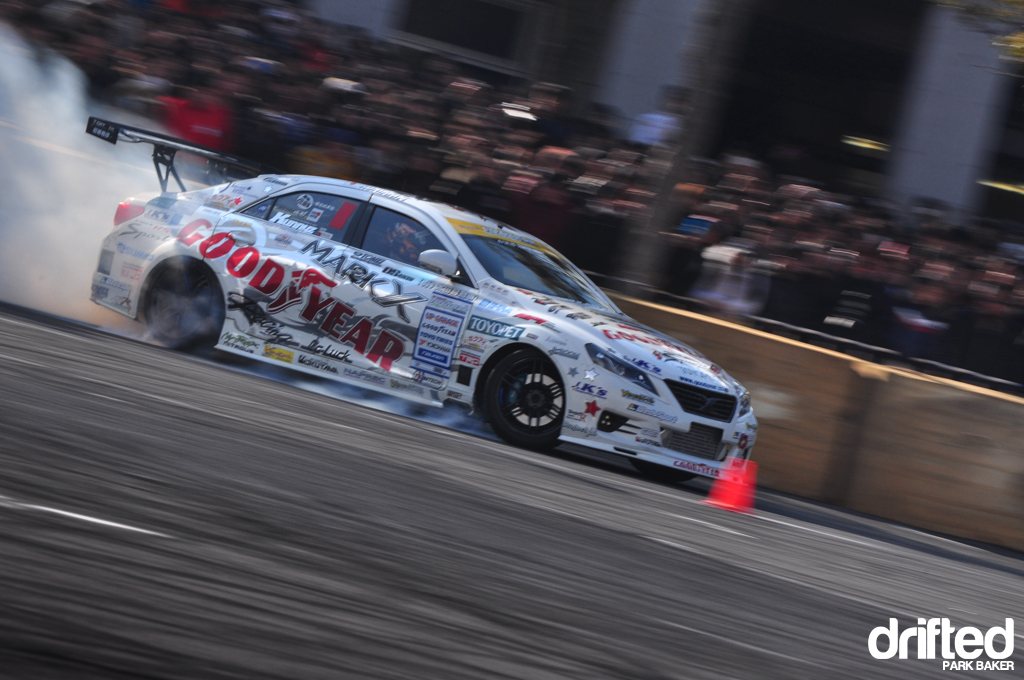 …going up against Takahashi in his big Mark X.

Watching two big sedans battle it out was perhaps the most exciting of the first round runs. 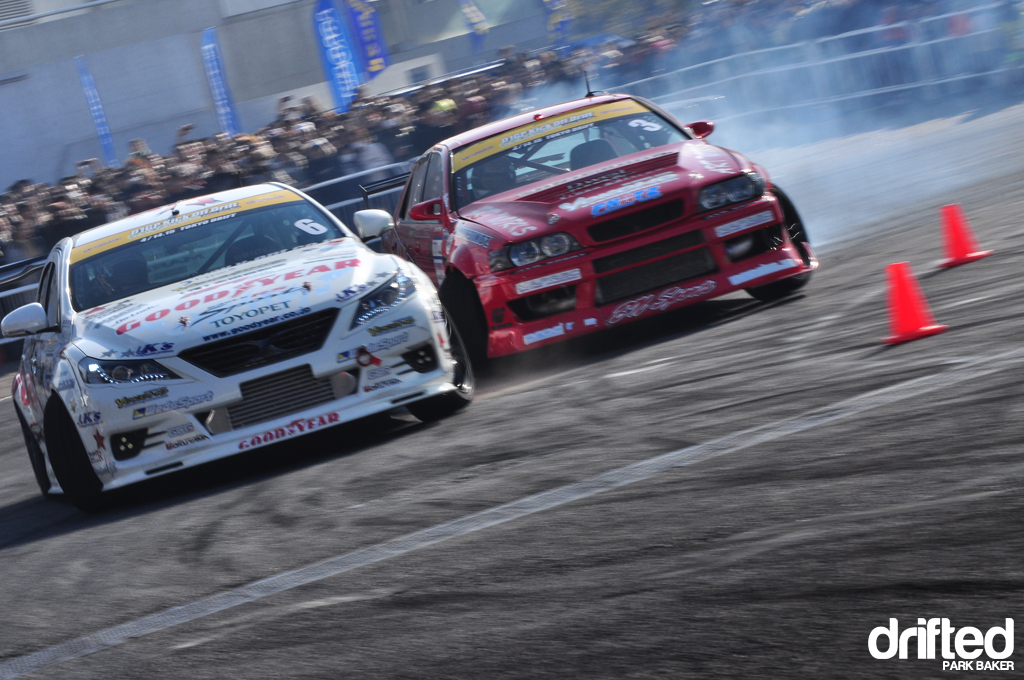 After sticking closely to Takahashi, it was Saito that moved on to the next round. 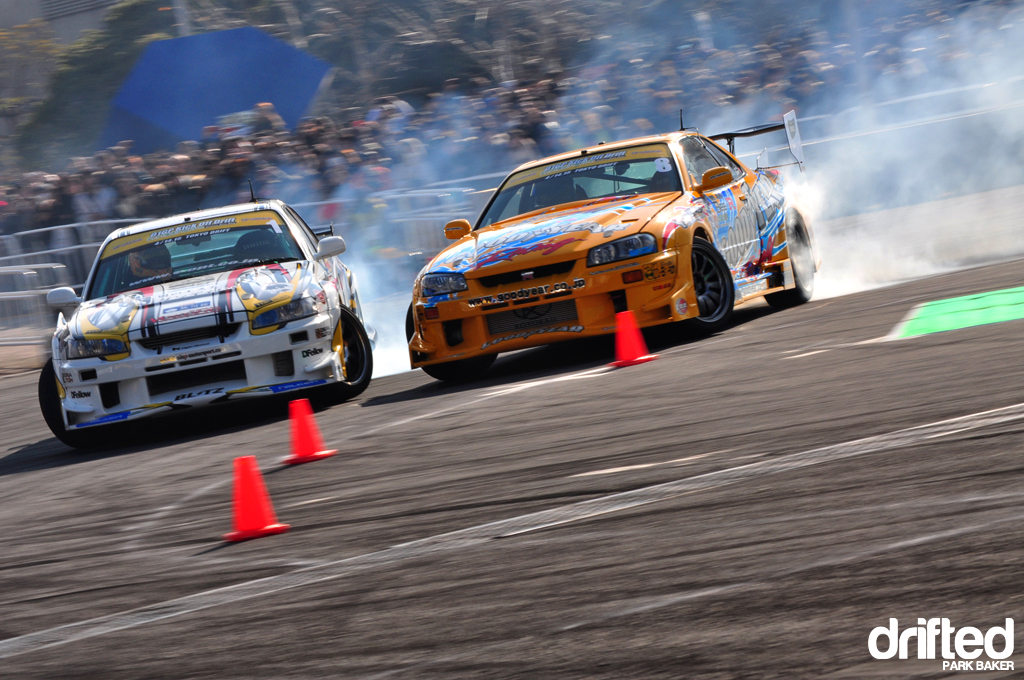 In a head-to-head Skyline match, Nomuken and Tezuka had a well fought battle. R34 vs. ER34! 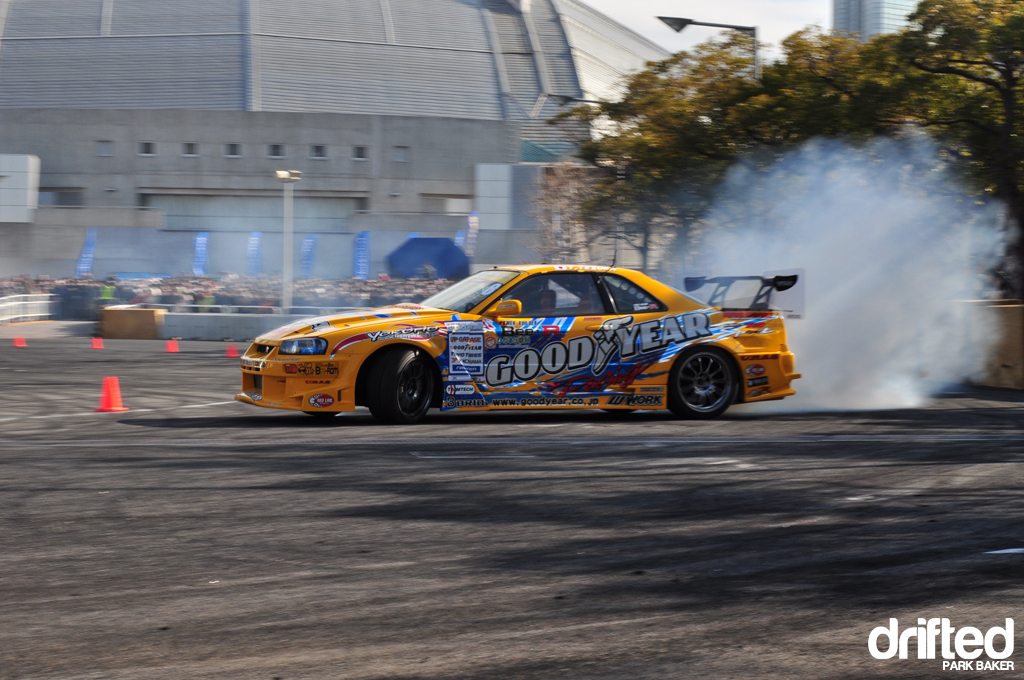 Next up was Hibino taking on Kumakubo in the Laurel (as seen in the first shot of this post). The AE86 was used for this exhibition, but as many know, he’ll be moving on to a new weapon this season. 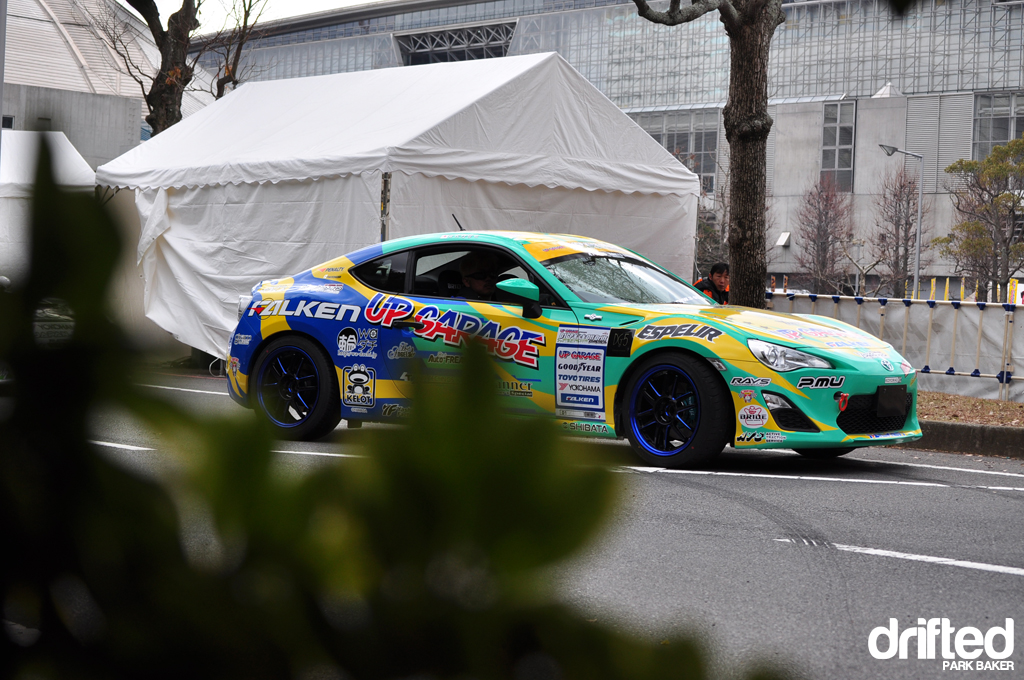 Hibino’s new 86 made its public debut at this event. 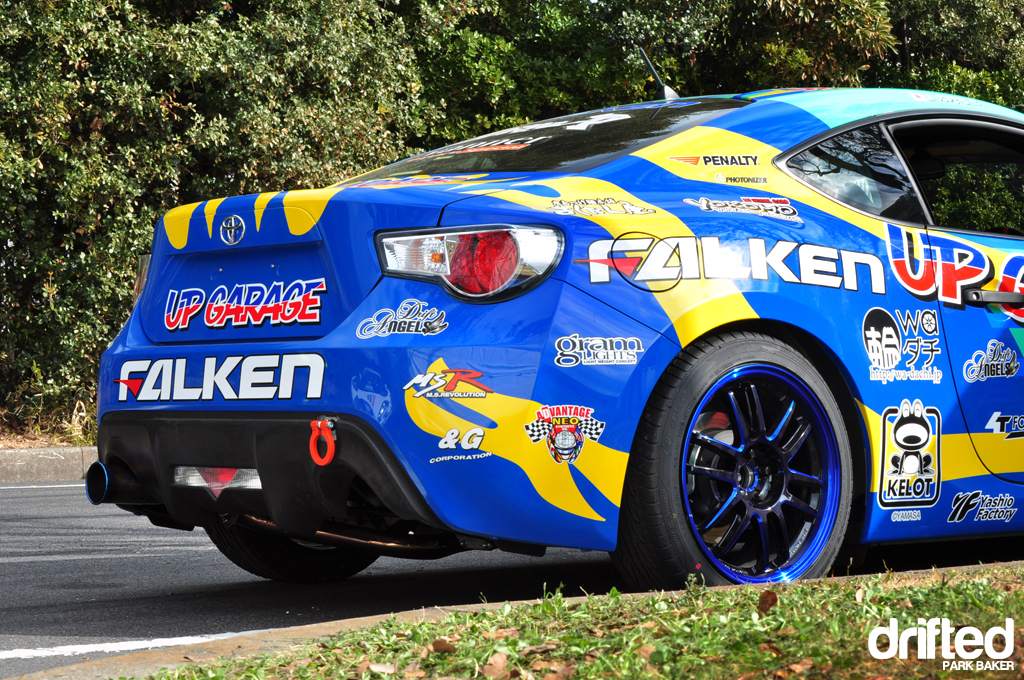 While it seems to be getting mixed reviews across the board as a D1GP performer, it looks to be up to the job.

It even got a short battle in with its older brother. Sibling rivalry? Okay, lame joke. Moving on…

After Kumakubo’s Laurel made some contact with Hibino’s AE86, Hibino won. In the second round, Saito took on Kawabata. 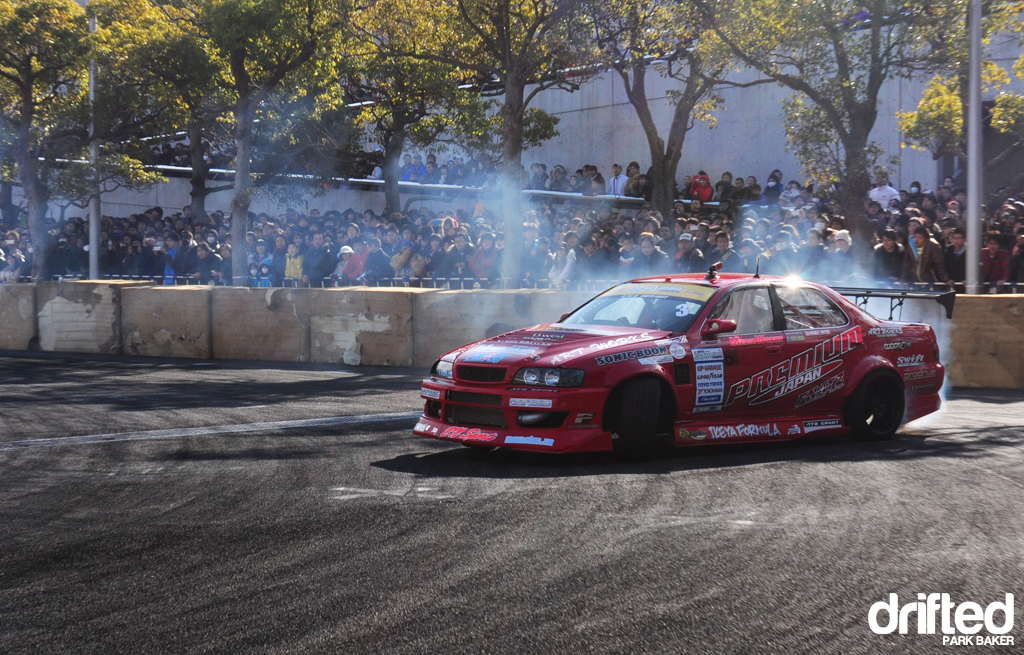 After another close battle, Saito was the one to move up the bracket.

Here’s Hibino gearing up for his second-round run against Tezuka. 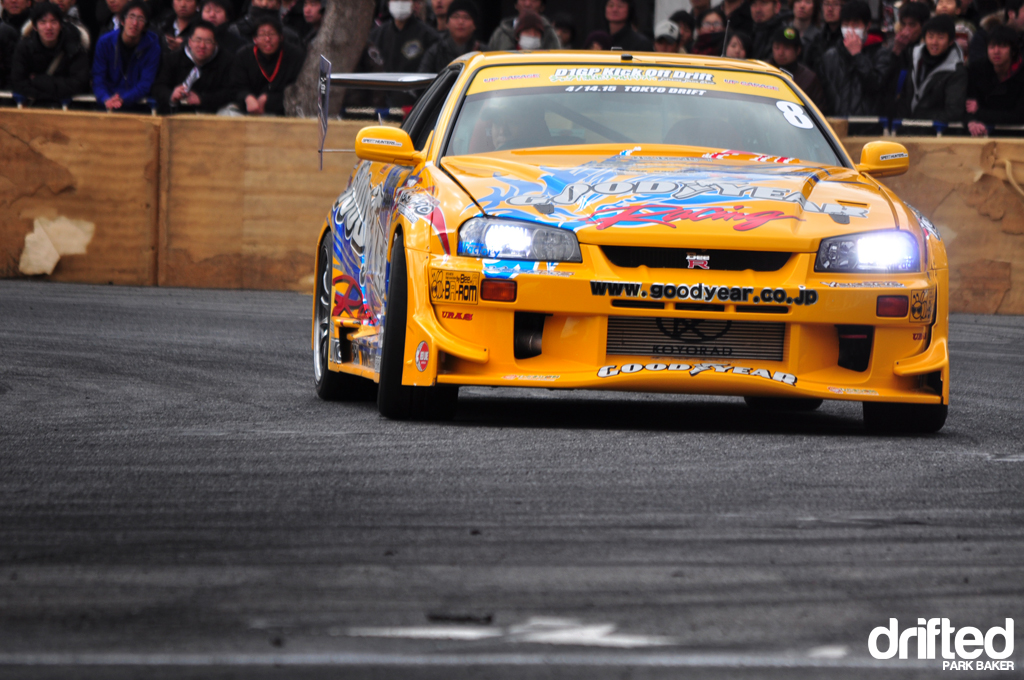 After last season’s R34-nosed R32 Skyline for Tezuka, this time its all-34. 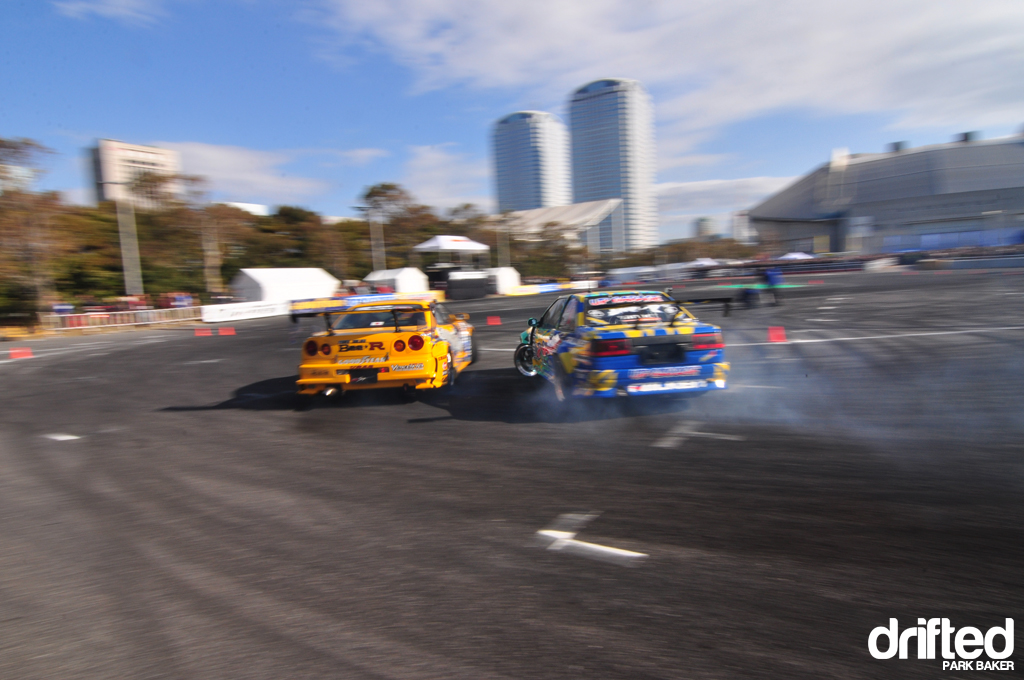 After the two runs, Hibino came out on top and advanced to the final round.

A few more pair tandems among the runners up…

…and Saito was crowned the winner of Saturday’s exhibition round over Hibino.

Before the event wrapped up, all the drivers took a final lap to draw some fanfare from the crowd for the upcoming season. 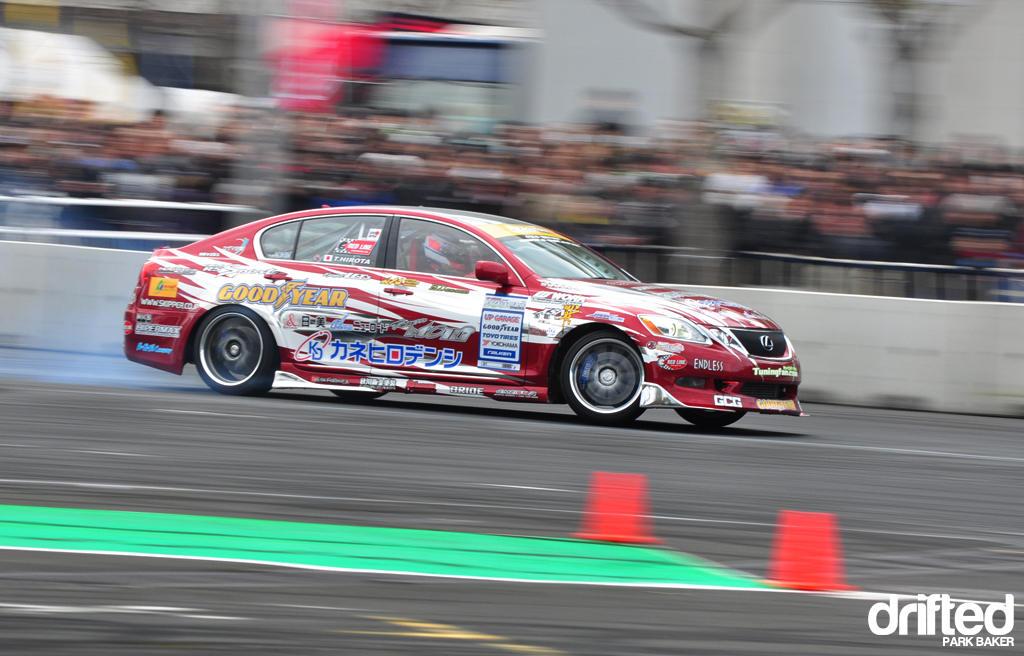 Hirota, who didn’t take part in Saturday’s battle, also made a quick appearance.

That Bee-R looking so clean! 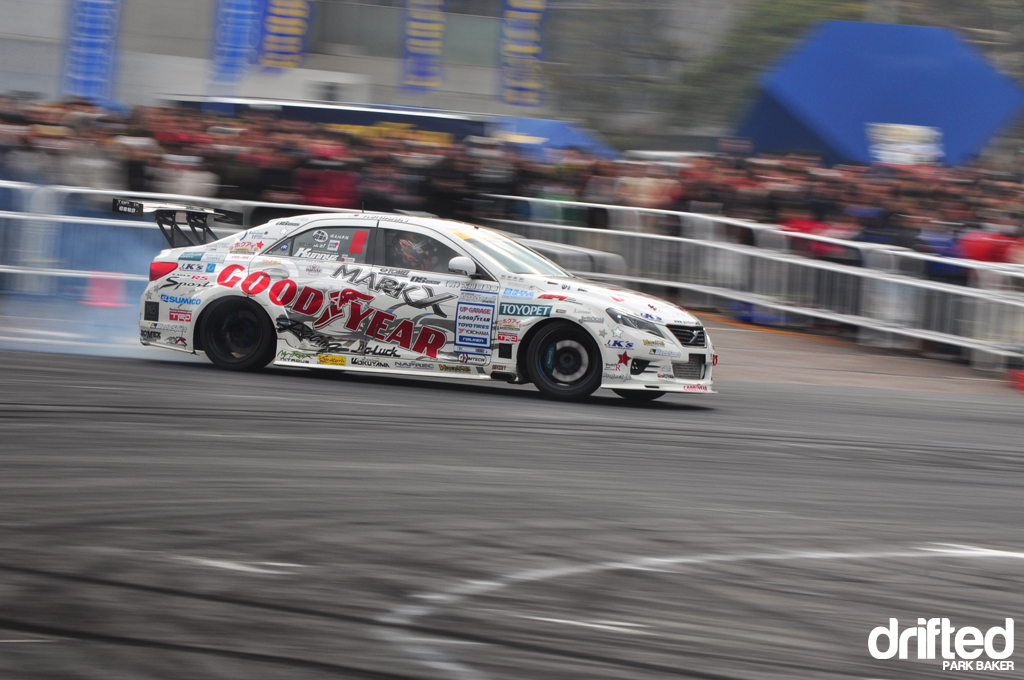 Takahashi throws the big Mark-X around one last time for the crowd.

There seem to be lots of fans of this big sedan, and its easy to see why. Great looking car with lots of power. 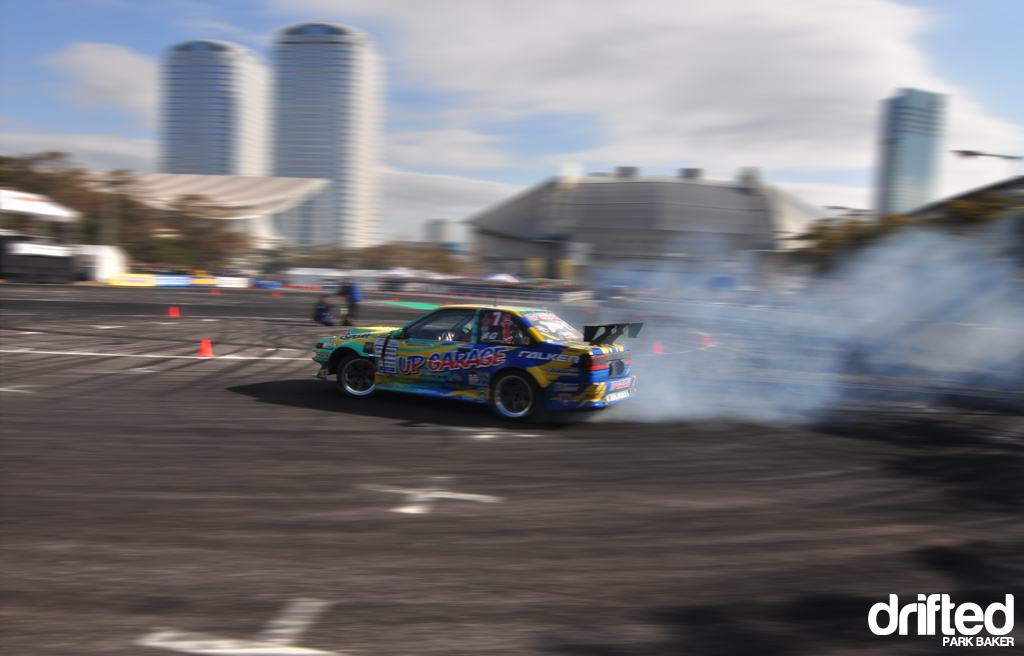 Hibino gives it one last go around as well. 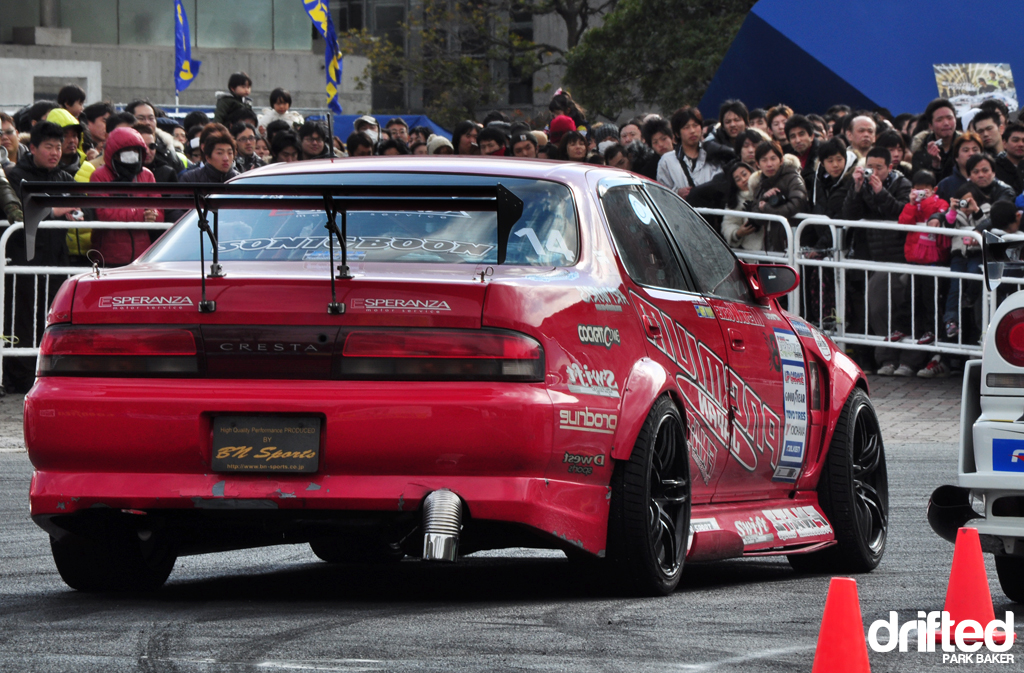 Saito posts up in the center for his win… 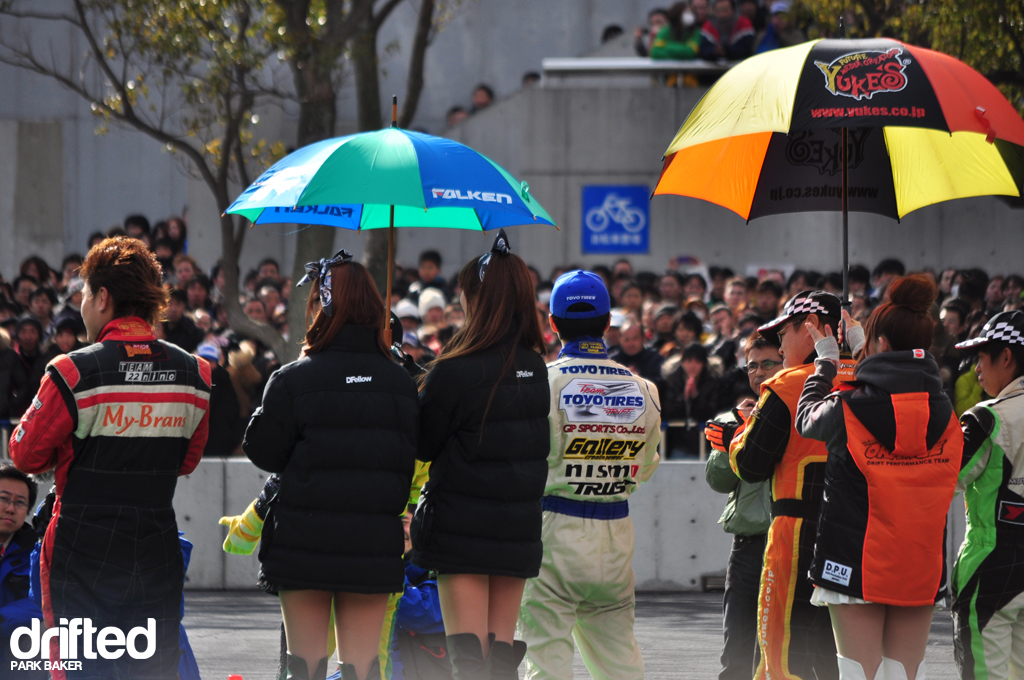 …and a wrap up by the organizers was in order, with some words about the 2012 season. 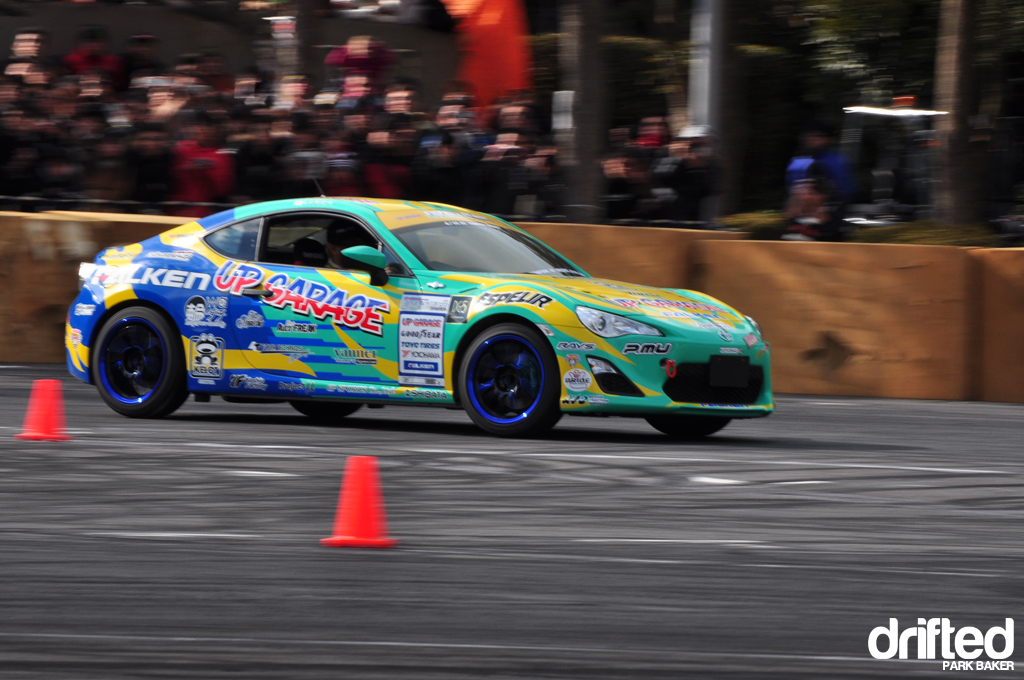 I’ll leave you with a couple more shots of the car many fans came to see. 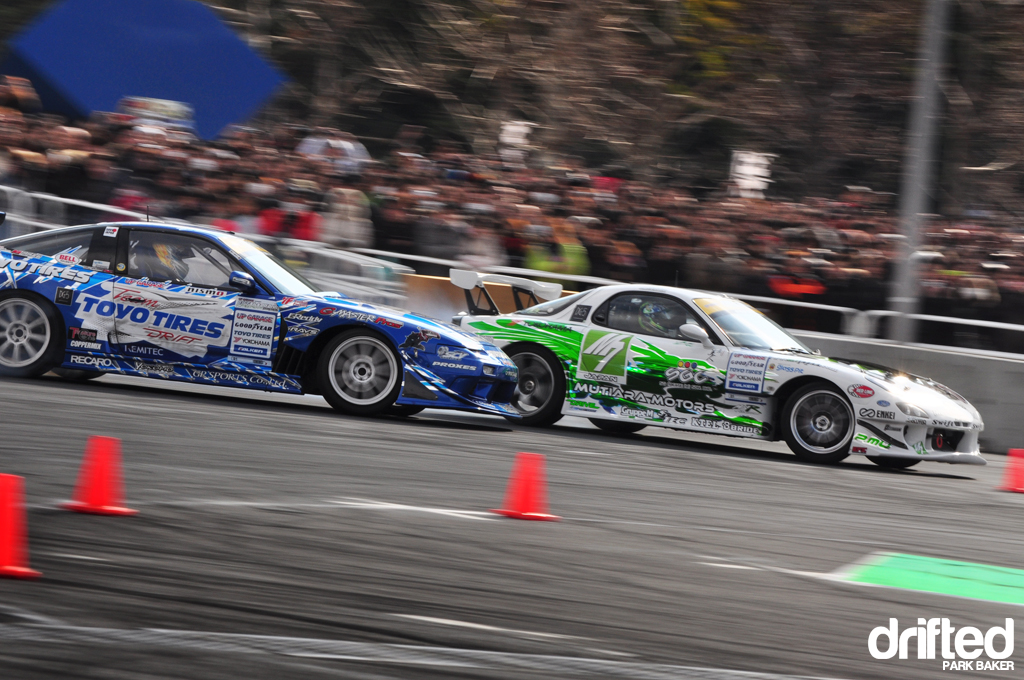 That’s it for the D1GP Kickoff from Tokyo Auto Salon. Keep in mind that this was strictly a demonstration/exhibition, so the results won’t affect this seasons standings. The 2012 season gets into gear in mid-April at D1GP Tokyo Drift Odaiba. More drift coverage coming your way from Japan this season, including the Drift Muscle, MSC Challenge, Grassroots events, Ebisu Drift Matsuri, and more D1GP. Looking forward to it!