Drifting In South Africa With SupaDrift!

Carnival City Casino plays host to the final round of the National Drift series hosted in Johannesburg, South Africa.

Drifted’s latest team member – Shawn Van Zyl shot, edited and published this fantastic video of round six of the South African SupaDrift finals. Drifting is really up and coming in South Africa, want to see how it looks? Hit play and enjoy.

You can read the full breakdown of the event below.

Southern Africa’s top Drifter athletes descended on Carnival City, Boksburg for a high horse power, tire smoking weekend like now other! Yes - the final round of SupaDrift (MSA’s National Drift Series) was one for the books!

Over 2000 petrol heads were treated to 2 days of world class competitive drifting as 25 professional drivers completed for the top spot and the championship title.

Drivers coming from as far as Cape Town and Mozambique fired up their fully customized, high powered drift machines on Friday morning for official practice.

Drivers had till Saturday morning to perfect the SD 06 track before having to put down qualification runs in front of the judges to make it to the top 16 and final tandem eliminations.

The lunchtime break saw something a little different with the addition of the Drum Dash!

The lunchtime break saw something a little different with the addition of the Drum Dash! A time trial autocross race around a custom course took place whereas local drivers had the opportunity to qualify for the illustrious Gymkhana GRiD event, happening in November 18th-19th. 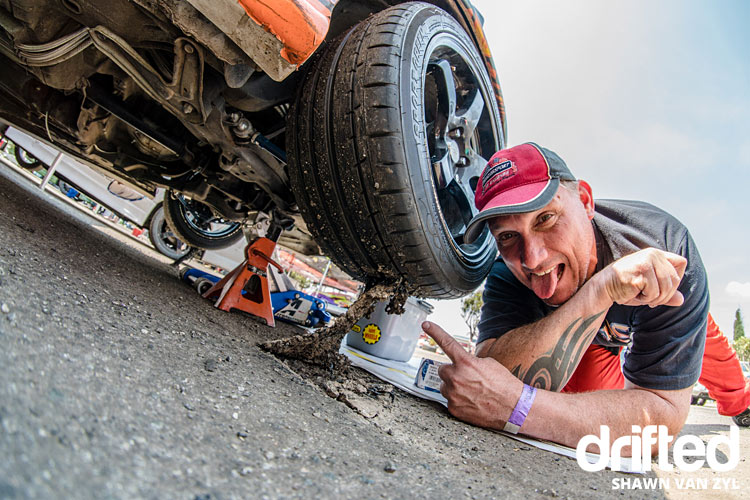 Gymkhana GRiD is a Ken Block spectacular event, hosted at Carnival City; twenty-two international drivers will take on the local contingent to see who rules the GRiD. SupaDrift competitors JP van der Spuy and Riaan Stokes, driving for Dragon Energy, each qualified with Golden Tickets; as well as Mathys Naude, and Stuart Gregory.

Clare Vale, the only woman competitor, happened to pick up a wildcard place in her campaign to topple the boys.

The weekend’s racing continued after lunch, where drivers went into qualifying rounds to see who would be the best and be top of the ladder going into tandem battles. 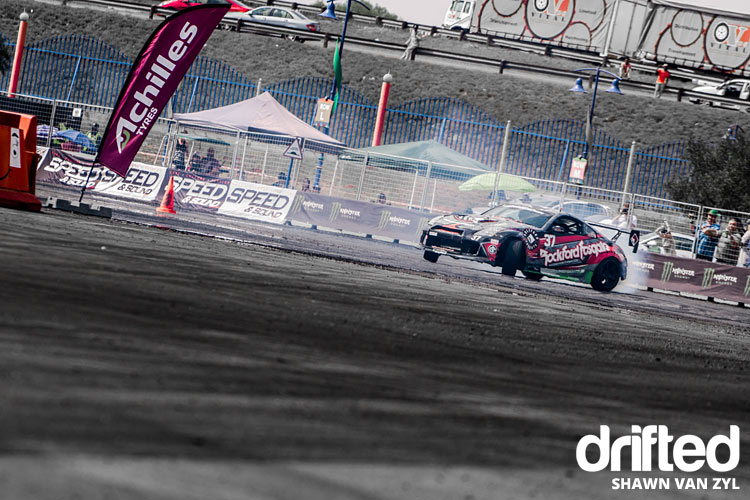 Jim McFarlane, a local driver, in his Achilles Tyres 350Z Nissan pulled out the stops to become the top contender for the day followed closely by Eric ‘the Viking’ van Eyssen.

Drivers who impressed with new found skill and an unrelenting pushy driving style like DeWit Oosthuizen, a young gun hailing from Pretoria, made a name for himself and certainly brought his full blown talent to the table, however losing narrowly to Morne Venter in the Top 16.

Mikey Skelton driving his 350Z Rockford Fosgate machine beat Jason Webb, who was struggling in his ‘Monstang’ which seemed to bear some gremlins and subsequent clutch problems. Eric van Eyssen taking charge against a fired up Stuart Gregory who forced the OMT (One More Time) and whose efforts have been earmarked as a up and comer for the 2018 season, and similarly Riaan Stokes driving for Dragon Energy S13 Nissan beating Carl Werner from the Western Cape.

Gavin Puren took on Armand Bronkhorst and even under the brave attempt of Bronkhorst, Puren came out tops. Gouveia fought hard against Vic Pardal, who seemingly drifted wide in the battle on the last corner and who was passed by Gouveia; taking the judges to the replay, and eventually affording the Natalian the win. Mathys Naude back in drift action eliminating Joey Govender, up from KZN.

Top 8’s flew by and all drivers seemed to impress. One knew as a spectator that the semi finals and finals were going to be a close contested event. Jim McFarlane was definitely on top of his game and handed his second round opponent, Venter a clean sweep.

Gouveia - not so easy had to go OMT against Skelton but came out tops and moved into the semi finals, as did Puren, and van Eyssen finding some great form in the latter part of the day.

A semi final run between Gouveia and McFarlane to decide the Championship saw a contentious protest come from Gouveia but after significant reviews of the battle, judges deemed McFarlane the winner, who also at that stage walked away with the Championship.
Puren and van Eyssen rivaled and competed hard in the battle against one another in the Top 4’s; which could have gone either way; van Eyssen eventually eliminated by Puren and setting up the Finals and 3rd/4th run off.

Van Eyssen and Gouveia’s 3rd/4th was tight but saw the on form Gouveia walk onto the podium in 3rd place.
The final battle between Puren and McFarlane went off ablaze but Puren left a gap on the chase, which saw McFarlane take a clean sweep for the days racing..

McFarlane stated “A big thank you to my sponsors especially Achilles Tyres and all the other drivers - I had to throw down some rubber and work for it.

The level of driving this weekend was up a notch again and makes the win feel that extra bit special. I enjoyed each and every tandem and the guys that pushed me to drive as hard as I could”

Driver of the Day - Stuart Gregory