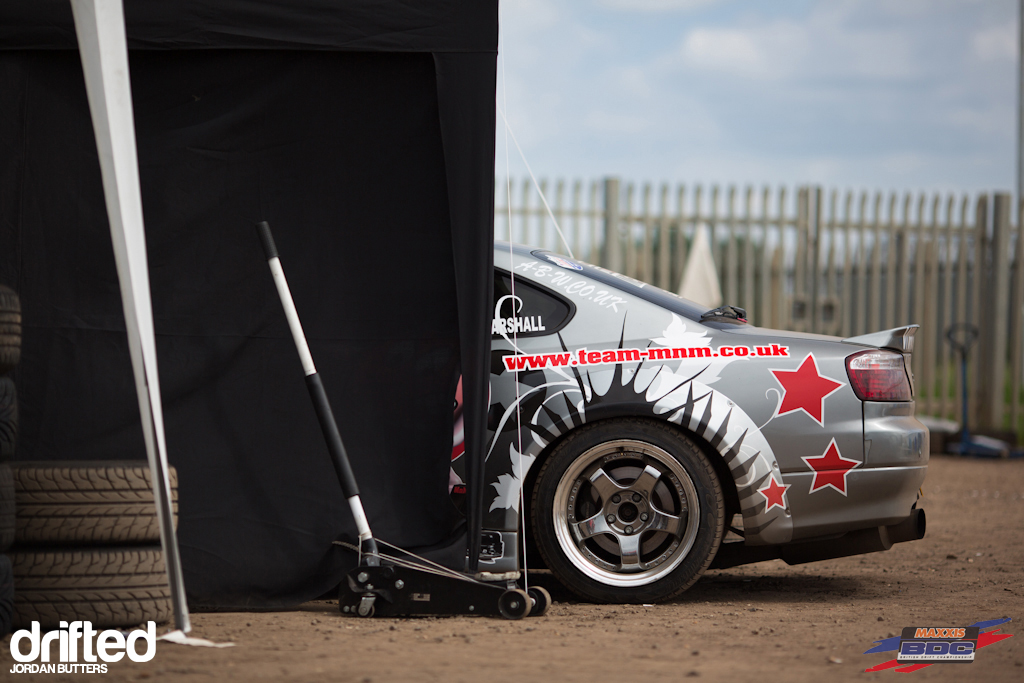 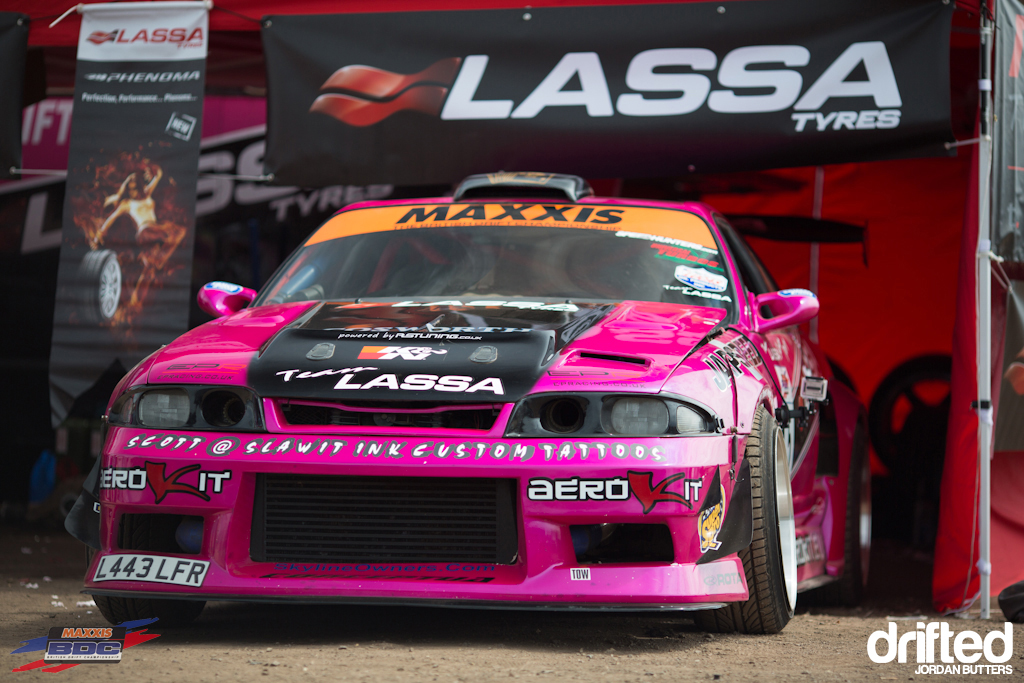 In the four years that I’ve been involved with the BDC, as either a driver, judge or photographer, I’ve witnessed the championship grow at a huge rate. The combination of a great organisational team behind the series, an eclectic mix of drivers and support crew and some of the best, and highest-tuned drift machines in Europe is one that doesn’t fail.

A key part of a successful BDC event is the accessibility of the drivers and cars to the fans. Open pit lanes are commonplace, meet and greet sessions before the main event take place wherever possible. How many other kinds of motorsport allow you to stand on the track, speak to the drivers and sit in their cars before a competition event, all on a standard entry ticket?

BDC commentators Anthony Cahill and Paul Mott take the opportunity during the meet and greet to speak with the drivers themselves, over the PA system, to truly immerse the crowd in the experience. Above, Hugo Fernandes of Team Redmist tells the story of how he’d managed to blow up and repair his diff again for the second round in a row, before spilling all of the PAS fluid from his Soarer onto the track before the end of morning practice. 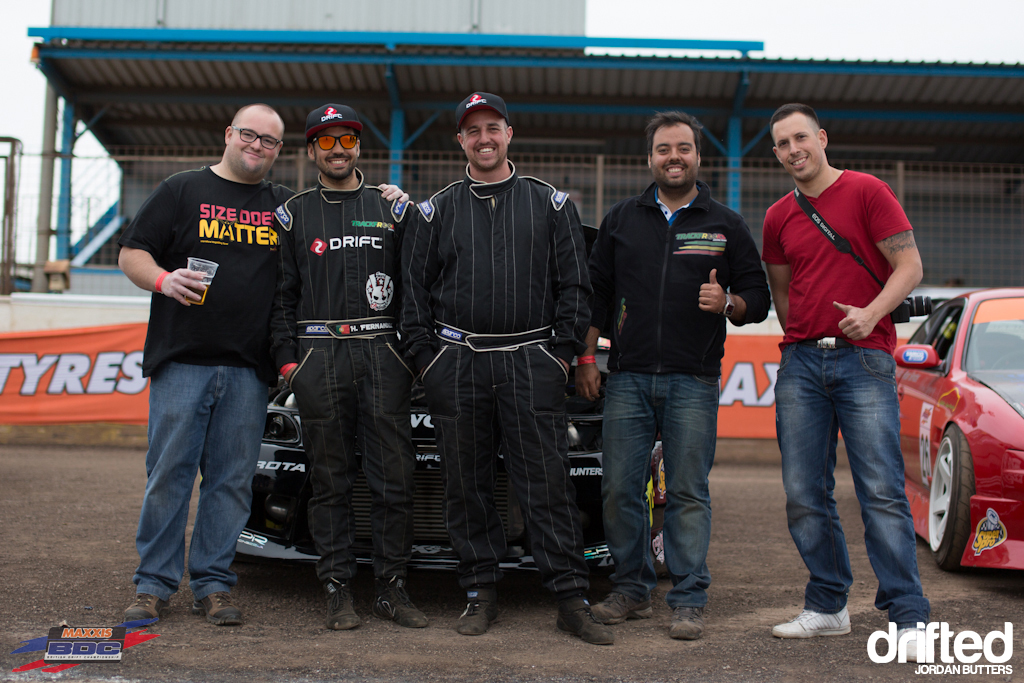 Luckily with a support team in tow repairs are swiftly dealt with, allowing Hugo to relax to a certain degree before the main event. 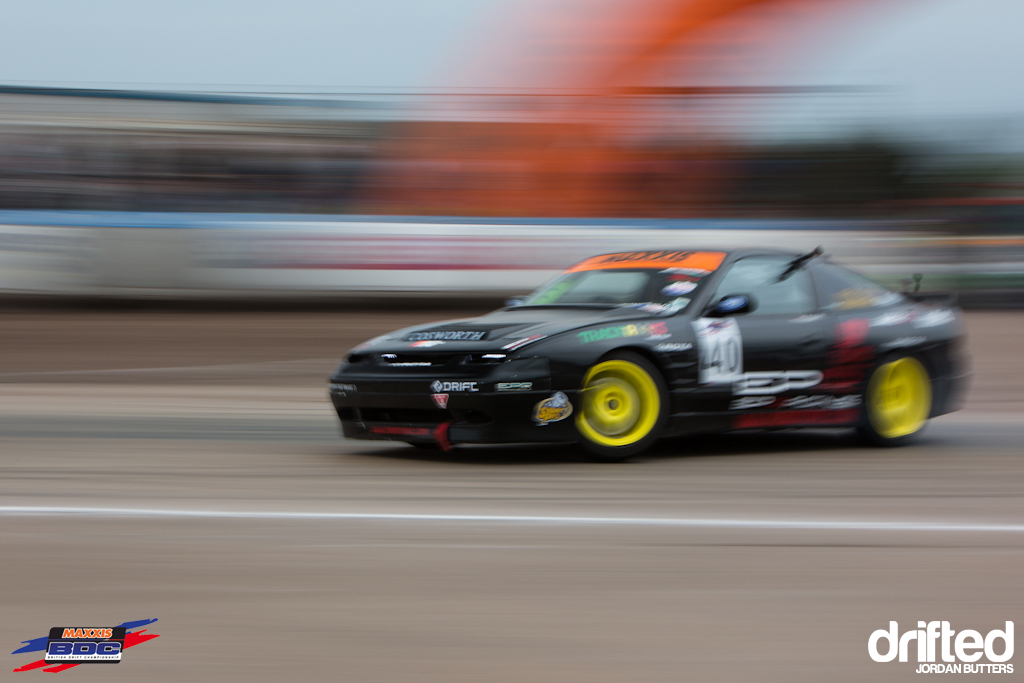 As the track clears and the crowd take their seats the Top 16 proceedings are underway.

As the numbers in the Semi-Pro class are whittled down two drivers stand out from the rest. Firstly, Brian Egan in the Dealt Width F20C AE86 is absolutely screaming around the small oval track at full throttle, full commitment. The second place qualifier was on top form. 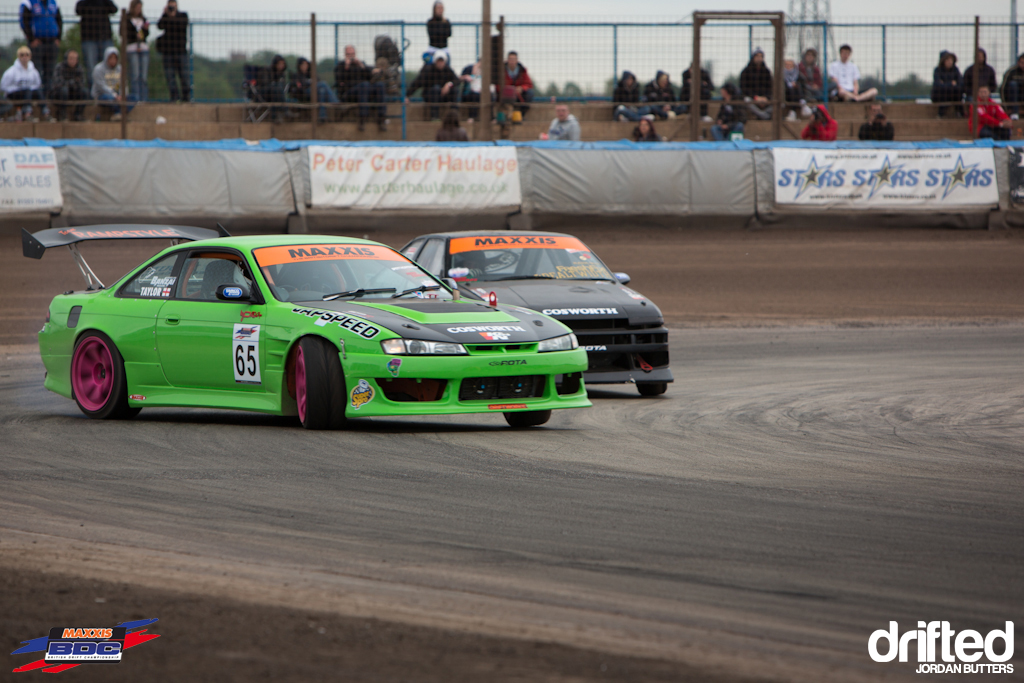 He would meet first place qualifier Gareth Taylor in the green S14a in the Semi-Pro final. After two battles a winner couldn’t be called, leaving it to OMT to settle the fight. Egan in the Corolla had just edged out Taylor and was awarded the Semi-Pro class win.

The Pro class kicked off with a repeat of a battle from round one in Teesside. Hugo Fernandes in the Redmist Soarer against Christian Lewis in the Dorihero R33.

Hugo driving well but out-driven by Christian and forced to straighten during a OMT, handing Christian the win. 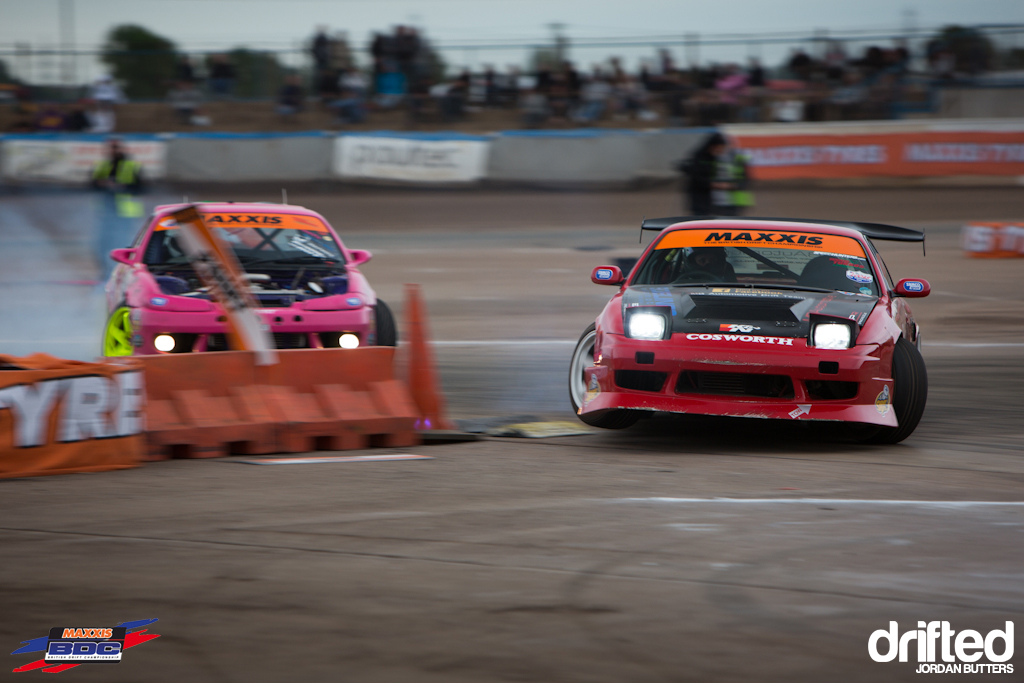 It was a battle of the front-end conversions next, both cars S14-chassis, the pink S15-fronted S14 of Paul Murphy chasing down and despatching with the S13-fronted S14 of Ross Gregory. 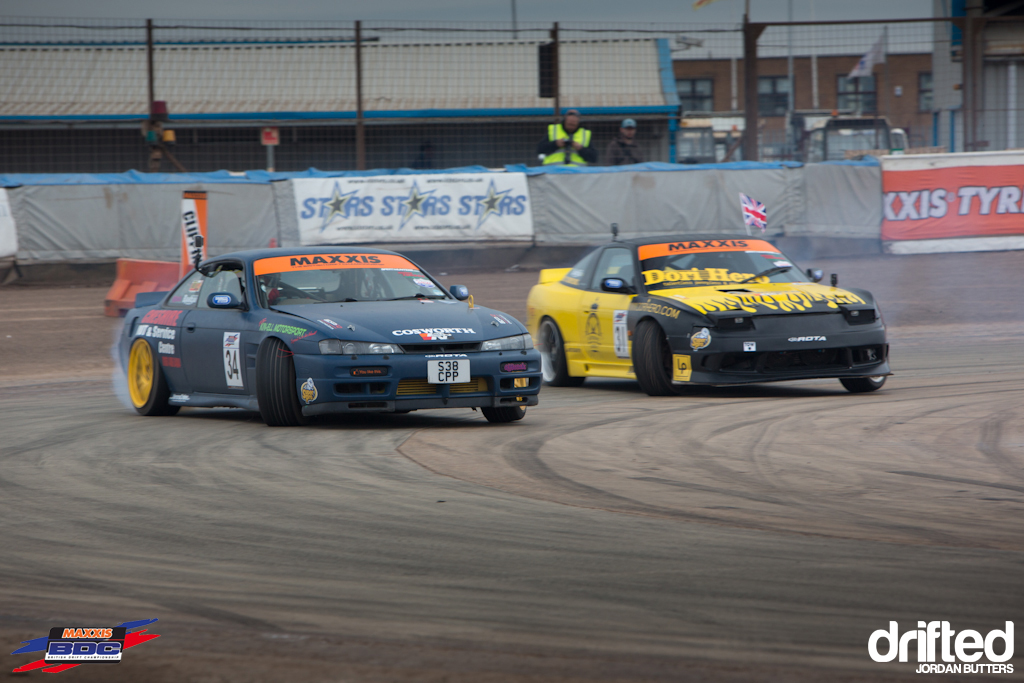 Another Dorihero driver and local competitor, Matt Campling, went against the road-going S14a of Alex Law, in his first ever tandem battle. Home advantage and experience played it’s part and Campling moved on. 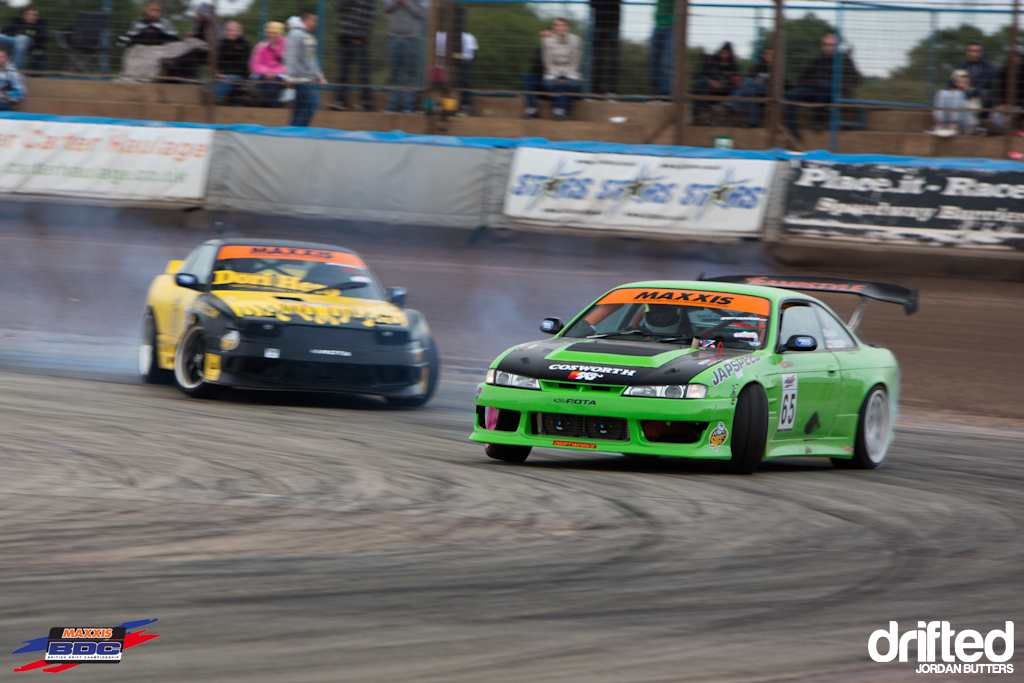 Gareth Taylor made the most of the BDC’s promotion rule and qualified in both the Pro class as well as the Semi-Pro. He met with Matt Campling in the Great 8 but could not shake the yellow and black S13 on its home-turf, despite a good effort.

Jamie Kenyon and Paul Fuller went head to head and took it to OMT. Kenyon chasing well and closing down the gap, securing his place in the Semi Finals.

In the first semi Paul Murphy and Christian Lewis pair off. Murphy pulls a substantial gap and is awarded a place in the finals as a result. 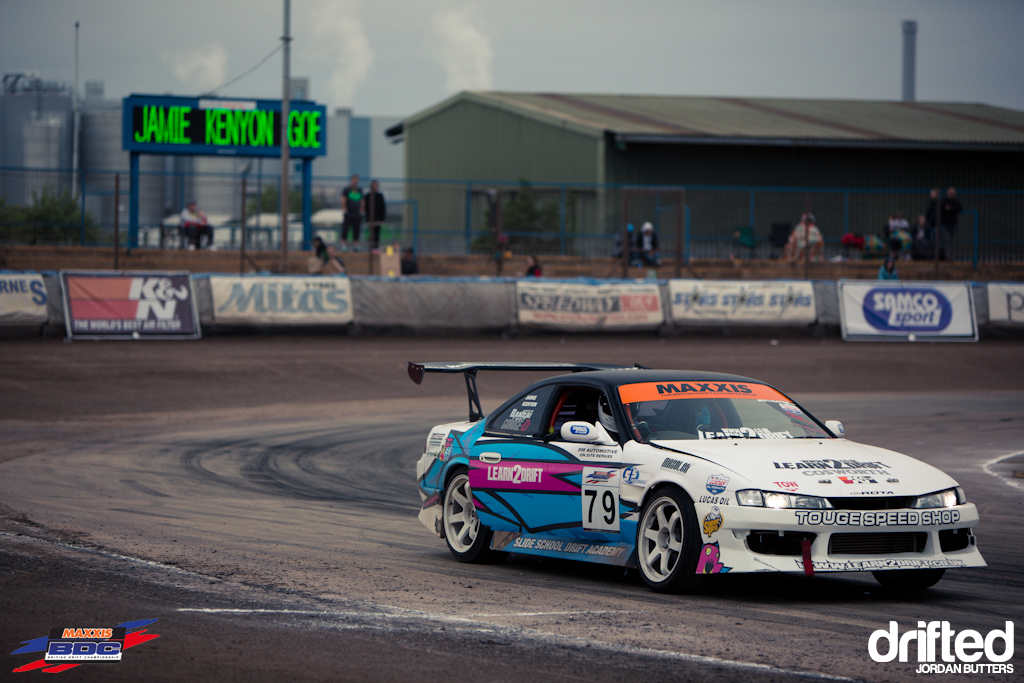 Kenyon and Campling were to fight it out for the last remaining spot in the Final. 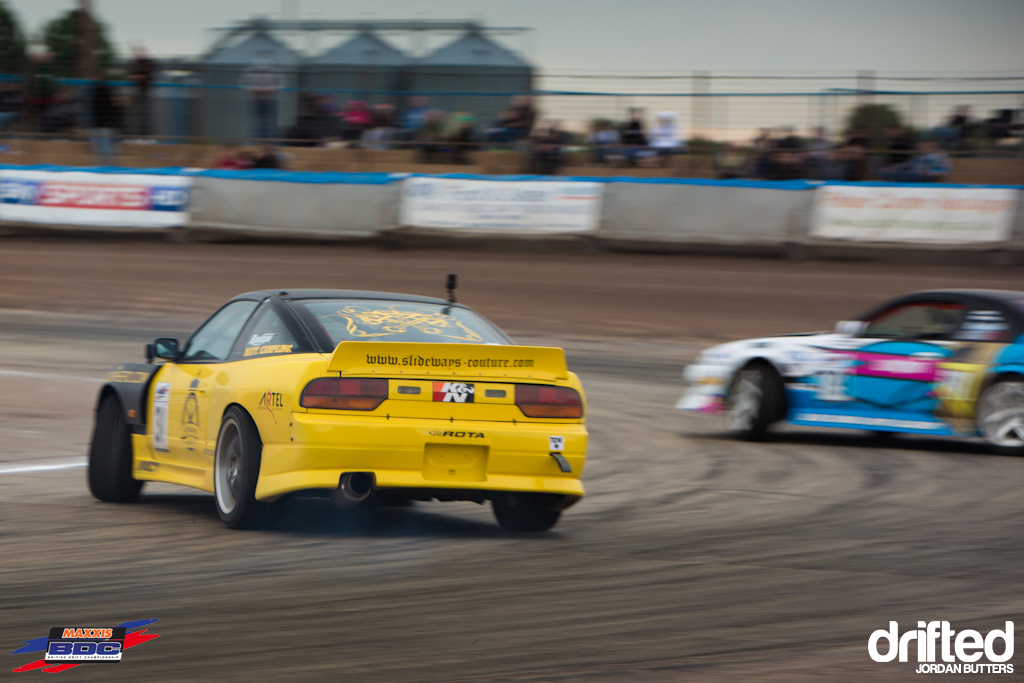 After two close battles and a OMT Campling’s better line around the arena carries him through to meet Murphy in the finals. 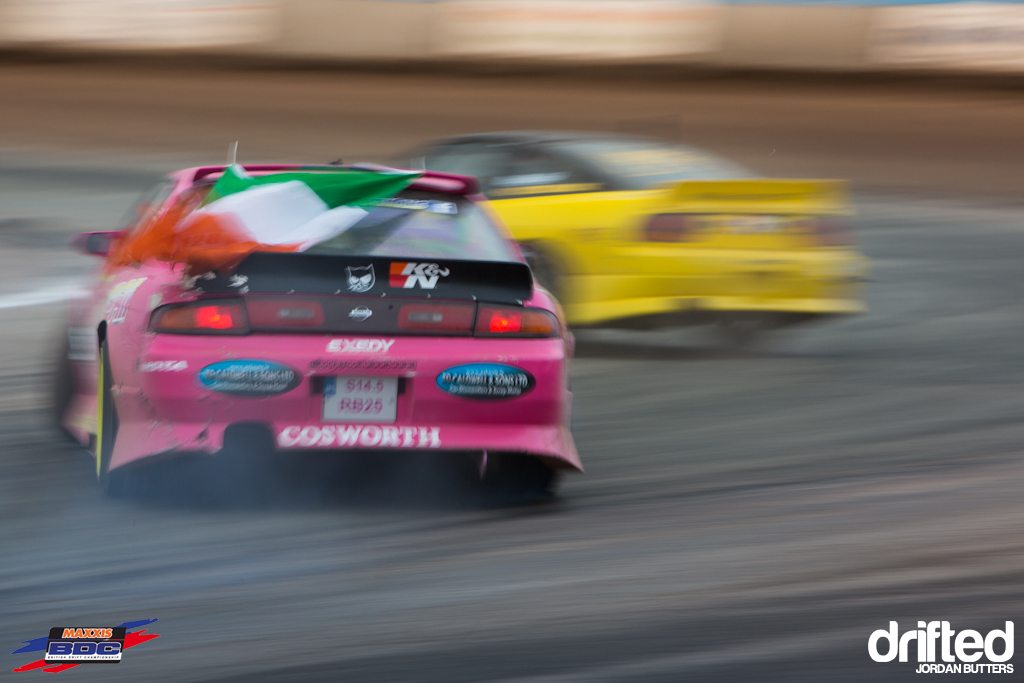 With the Final underway and the green, white and orange Irish flag waving proudly in the wind Murphy chases down Campling’s yellow S13 with plenty of confidence. 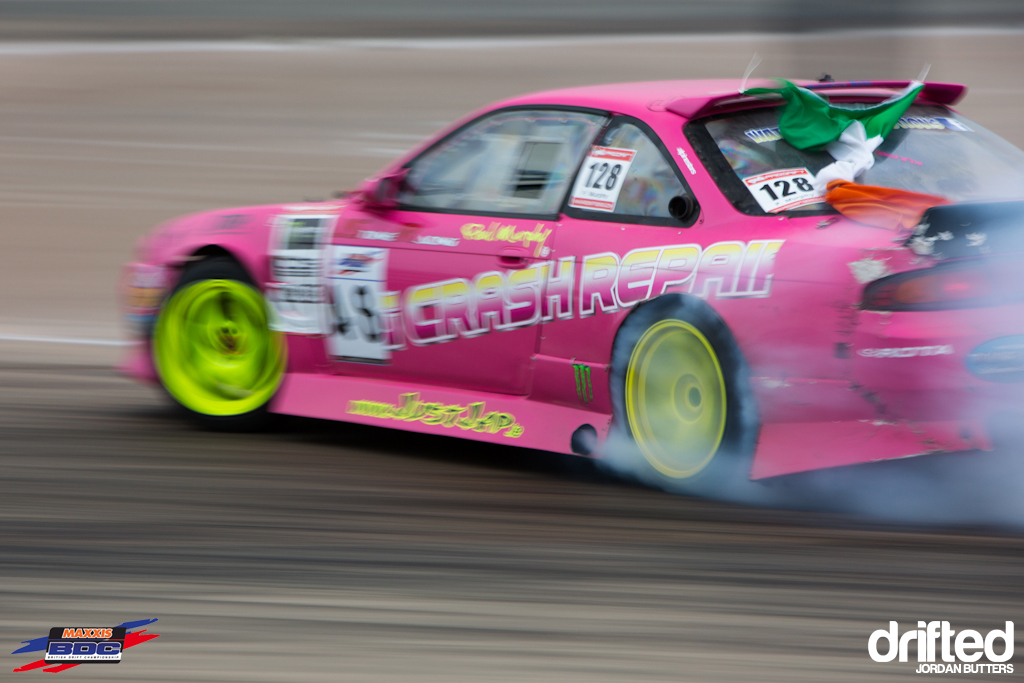 Forcing a mistake by Campling, which hands Murphy in the pink S14.5 the win on a plate.

As the what little sun we had disappears below the horizon the Super-Pro class are called into the arena to play. Time for the main event. 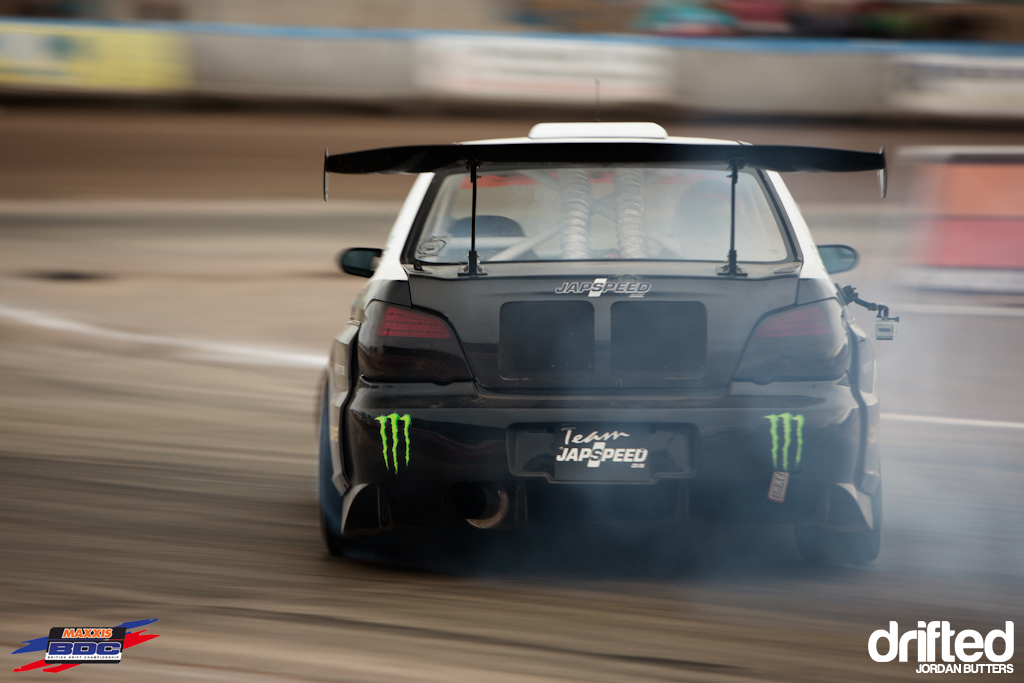 Team Japspeed’s Shane Lynch had taken to the wheel of the Japspeed Subaru, usually piloted by Steve Biagioni, following mechanical issues with his own twin-turbo V8 S15. His opponent in the Top 16 should have been MIchael Marshall in the MnM S15, however further mechanical issues prevented Marshall from competing, granting Lynch a bye into the Great 8. 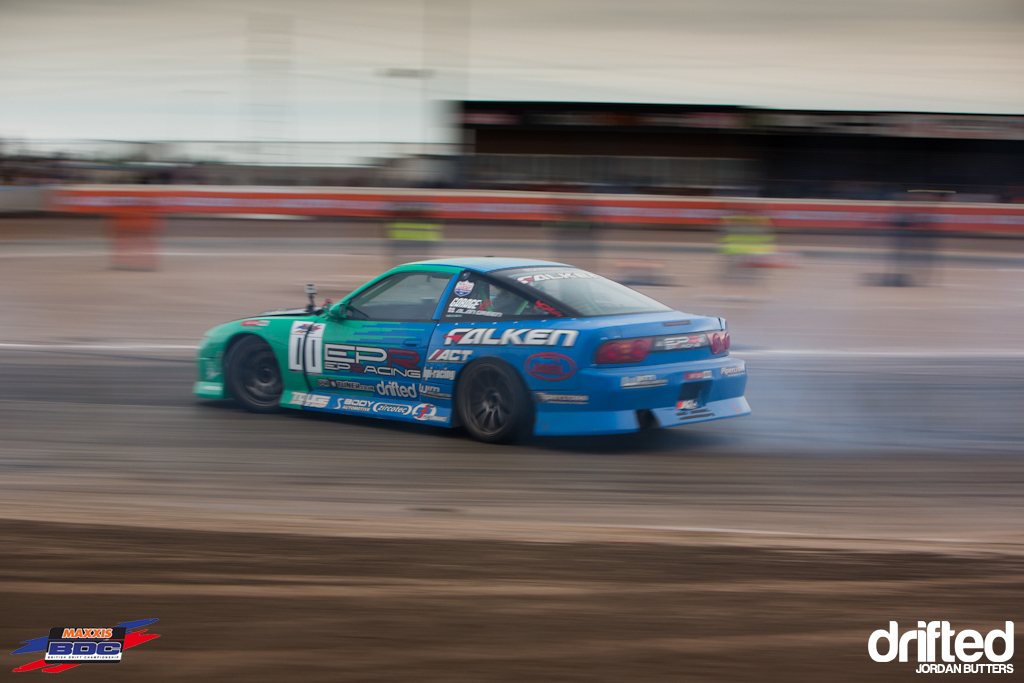 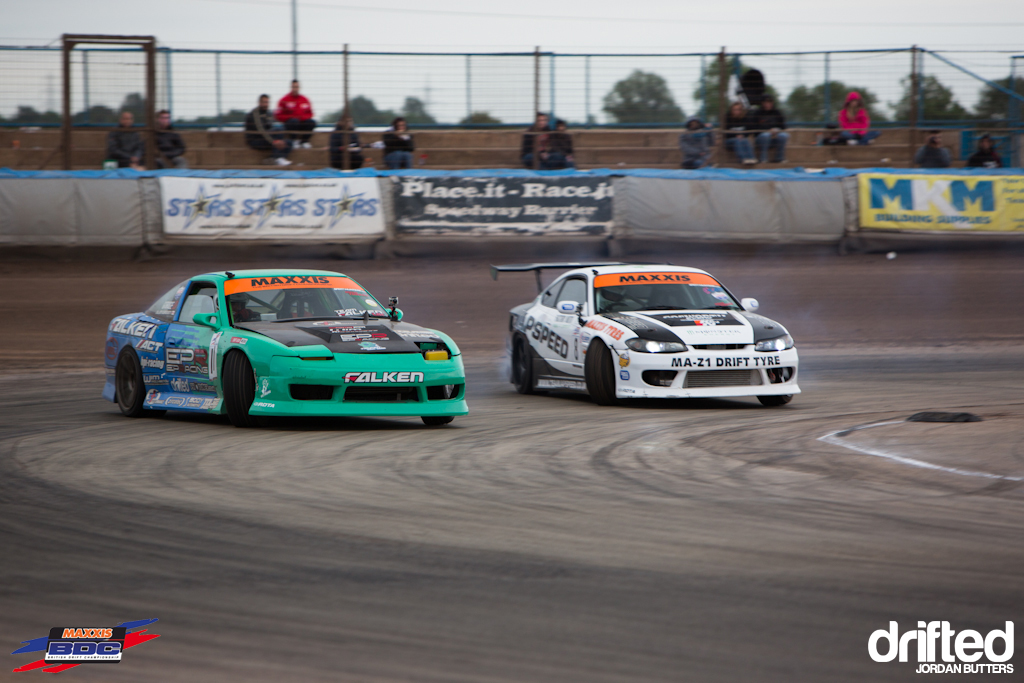 He was paired up against another Japspeed driver, Paul Smith. What’s more, Norfolk Arena is Smith’s stomping ground, putting Green’s skills to the test. 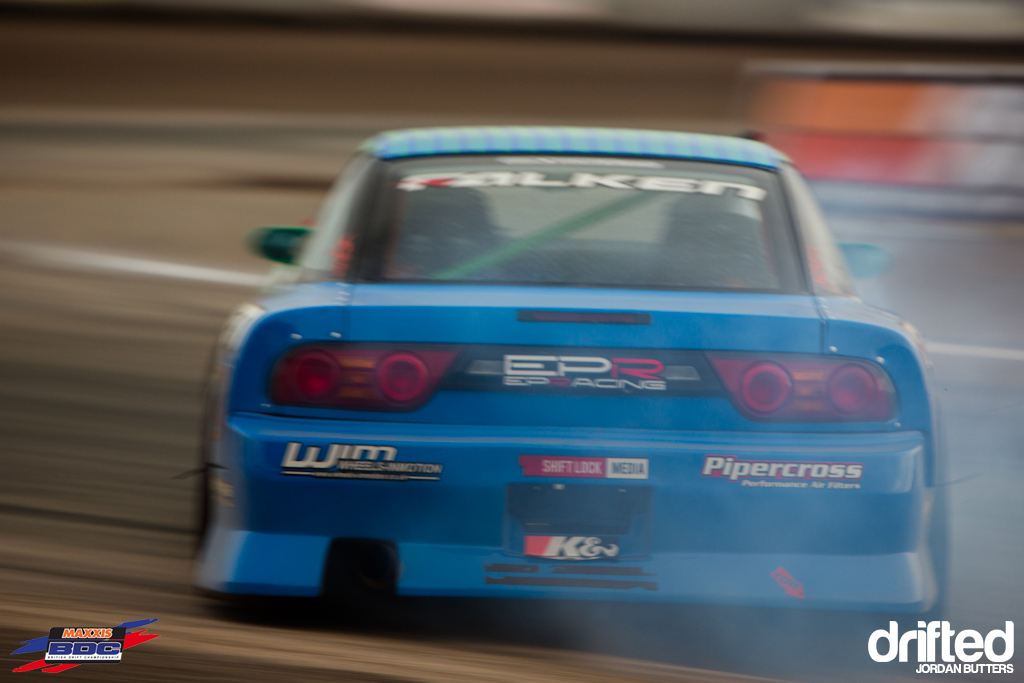 Green pulls a gap on Smith when leading but Smith’s line is judged to be better, putting Green out of the competition.

In a battle of the behemoths the 1000bhp SATS Supra piloted by Mark Luney is paired agains the 500bhp bright pink Lassa Tyres Skyline of Simon Perry. This isn’t the first time these two have met, although the confrontation usually occurs nearer the finals! Luney manages to tame the beast and progresses into the Great 8. 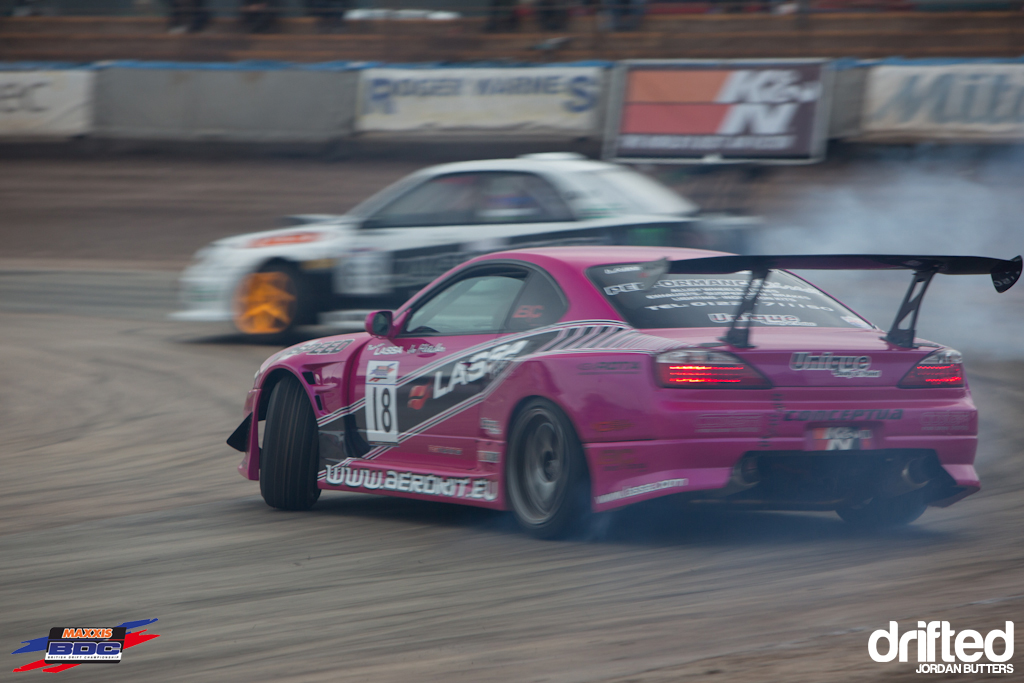 Fellow Lassa Tyres driver Jo Fletcher steps up the mark to take on Baggsy in the Japspeed Subaru.

Baggsy looking at home in the fire-spitting 1JZ-powered Scooby takes the win. 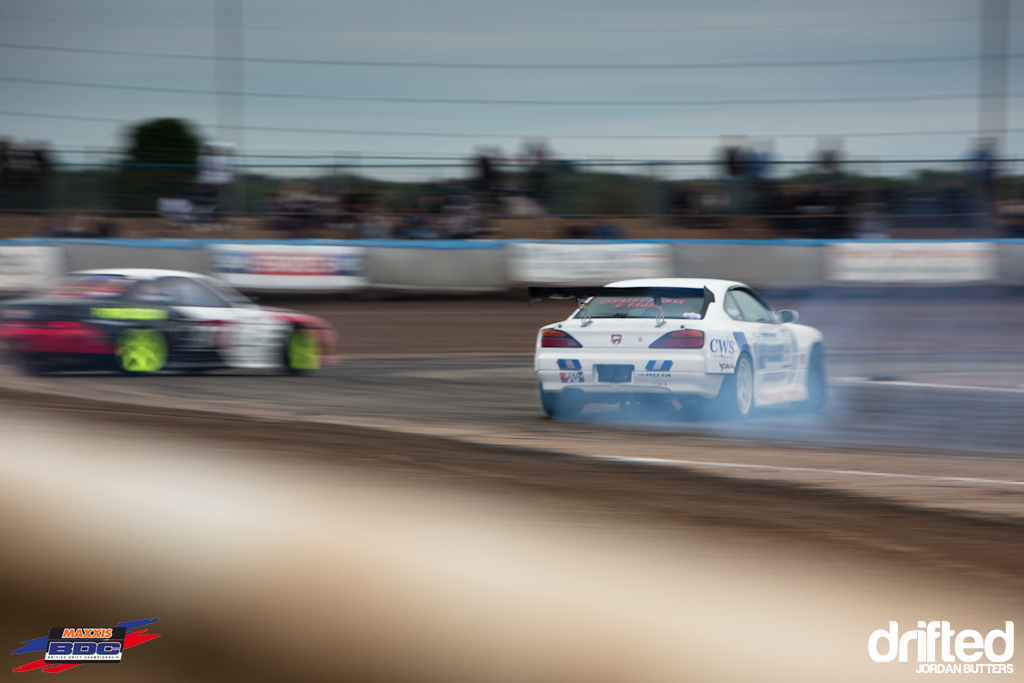 You may remember the Viper-engined S15 of David Waterworth from Part I of our coverage. David faced off with the fantastic-looking Soarer of Wayne Keeber. 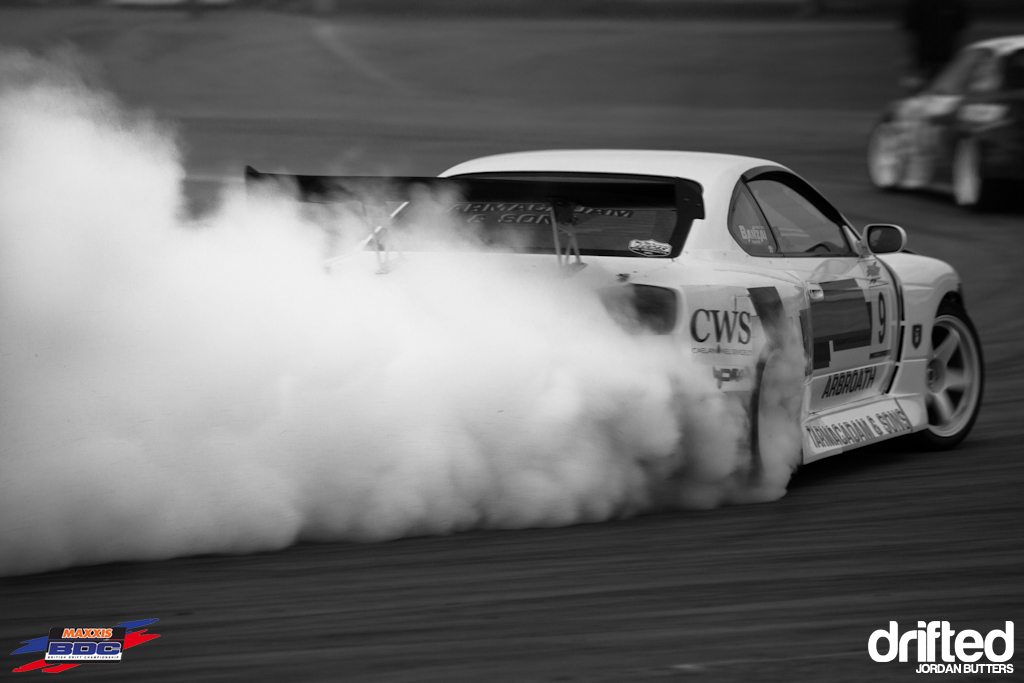 The rumble of the V10 followed by plumes of thick white smoke, unfortunately not enough to keep up with the pace of Keeber’s Soarer, ending Waterworth’s weekend early.

Consistency is a big part of drifting and consistent is the first word that springs to mind when you think of Steve Moore in the red SATS Motorsport S14a. This trait pays off as Steve sends Wes Keating of Team WKD packing back to Ireland in the white S13.5.

Another Irishman, Shane O’Sullivan in the Monster S15 looked set to make light work of Danny O’Brian in the multi-coloured luminous S14a following O’Sullivan’s win at round one and a rather one-sided practice run here at Norfolk. However the BDC is full of surprises and the Monster S15 was soon spinning out on control in the Norfolk shale, handing O’Brian the final spot in the Great 8. 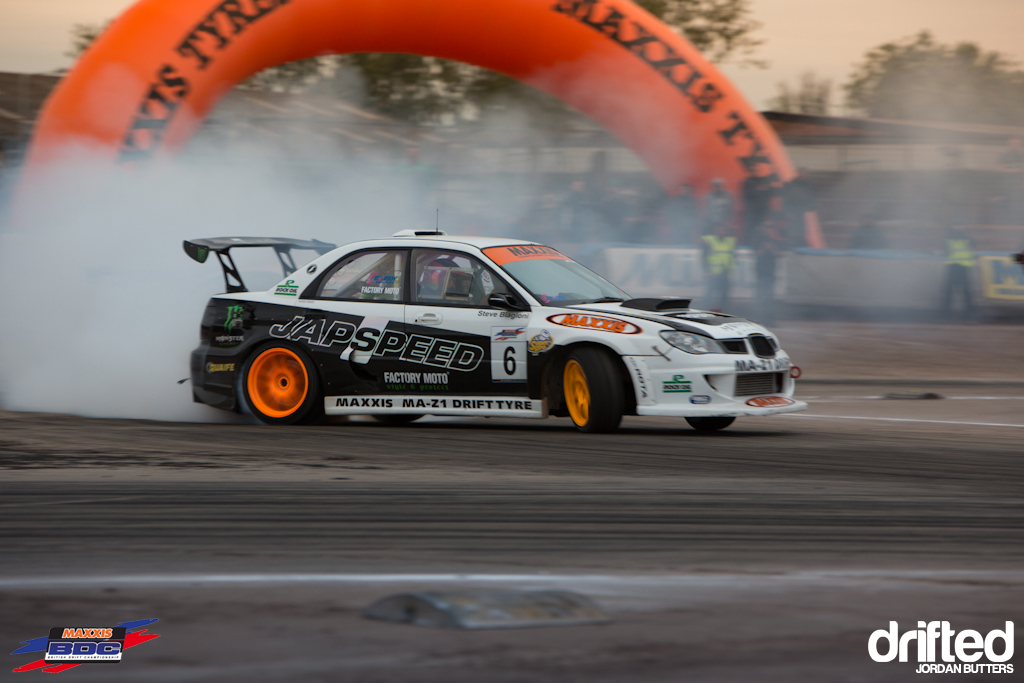 Into the Great 8 and Shane Lynch looked perfectly at home in the Japspeed Subaru. 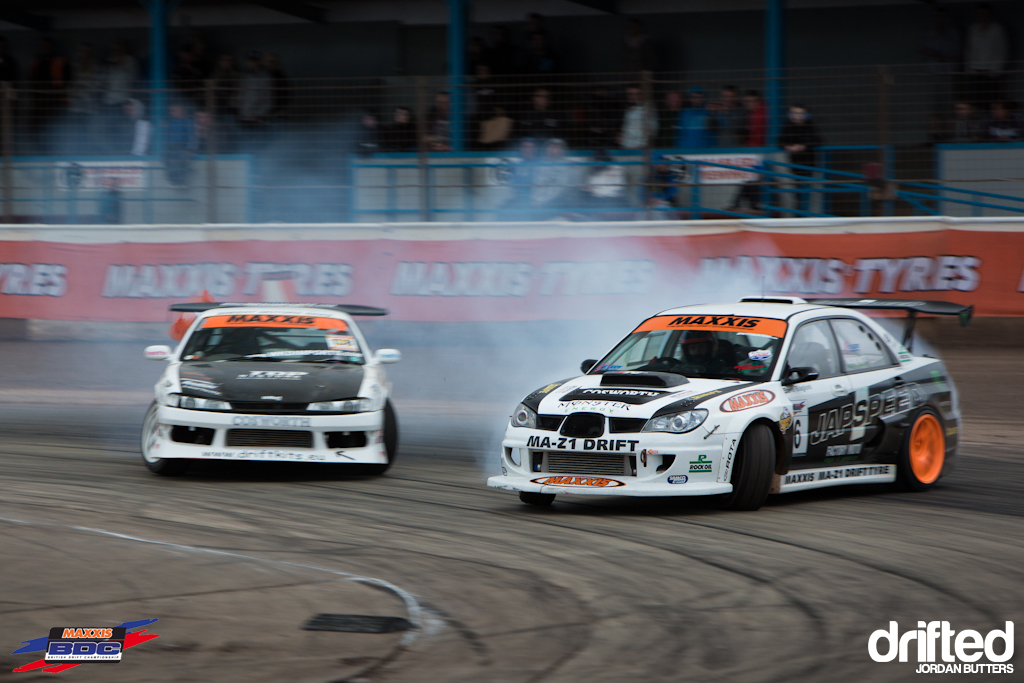 However fellow Irishman Barry Leonard in the WKD S14a wasn’t about to give up without a fight and chased down Lynch with fantastic accuracy. The judges rule in Leonard’s favour and he moves on to the Semi Finals.

A smoke-screen was due to descend on the arena at any minute, Paul Smith and Mark Luney rolling into place at the start line.

Wayne Keeber’s Soarer is possibly the most photogenic car of the season so far. Some cars just seem to gel with cameras and you can’t help but take a nice photo of them. 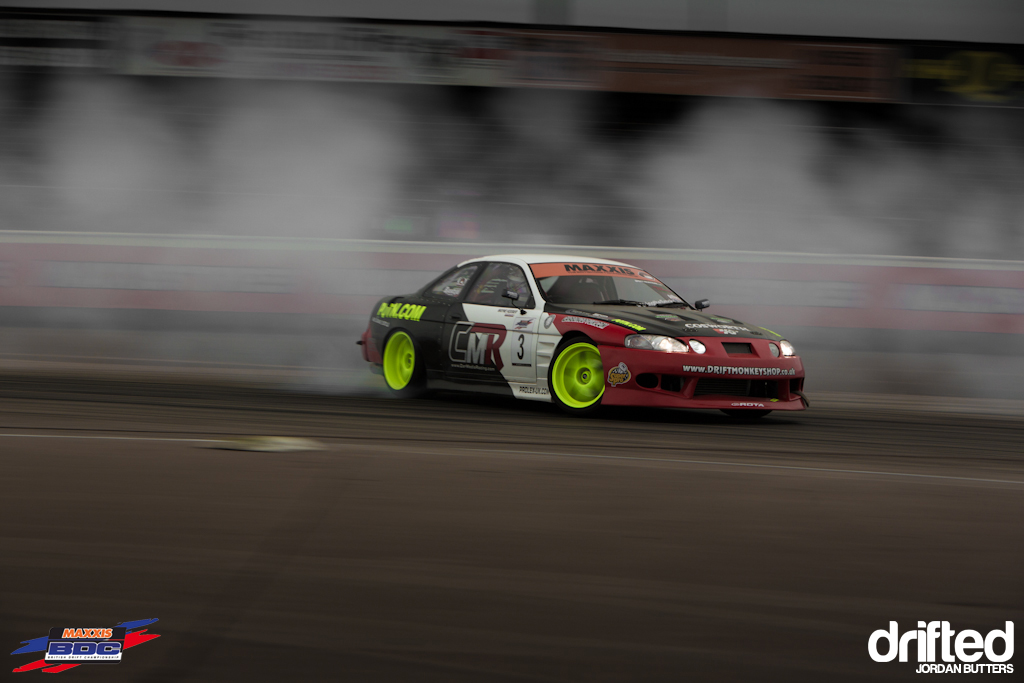 See what I mean? Wayne has also picked up our good friends over at Driftmonkey Clothing as a sponsor for this season. 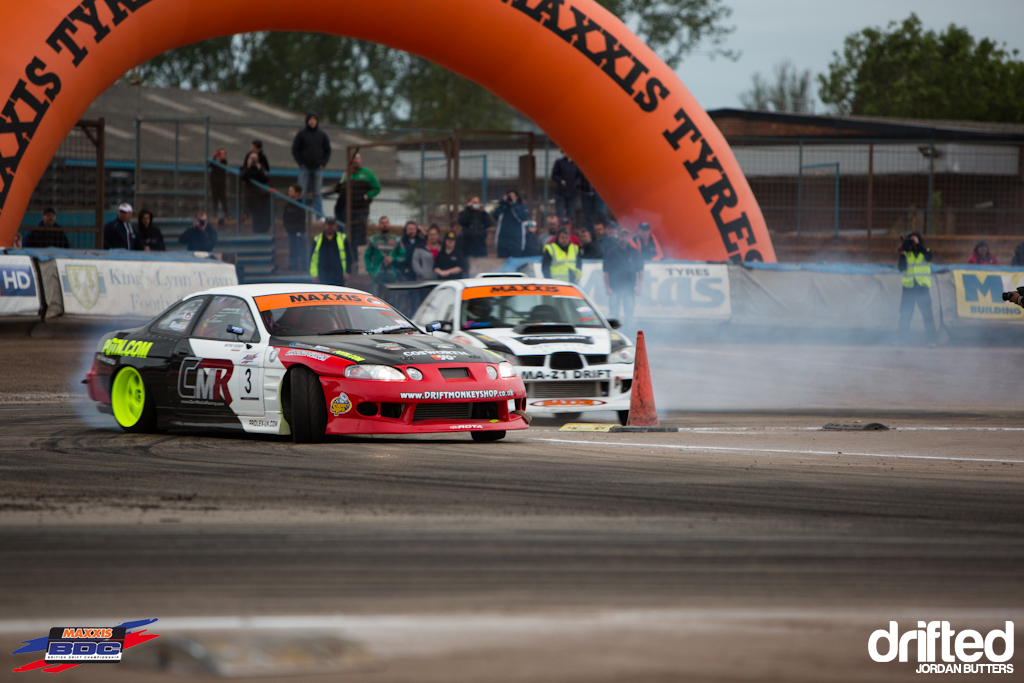 Unfortunately for Keeber the judge’s eyes are more tuned into to speed, angle and line rather than aesthetics and his opponent Baggsy was judged to have the upper hand, moving the Japspeed Subaru into the Semi Finals. 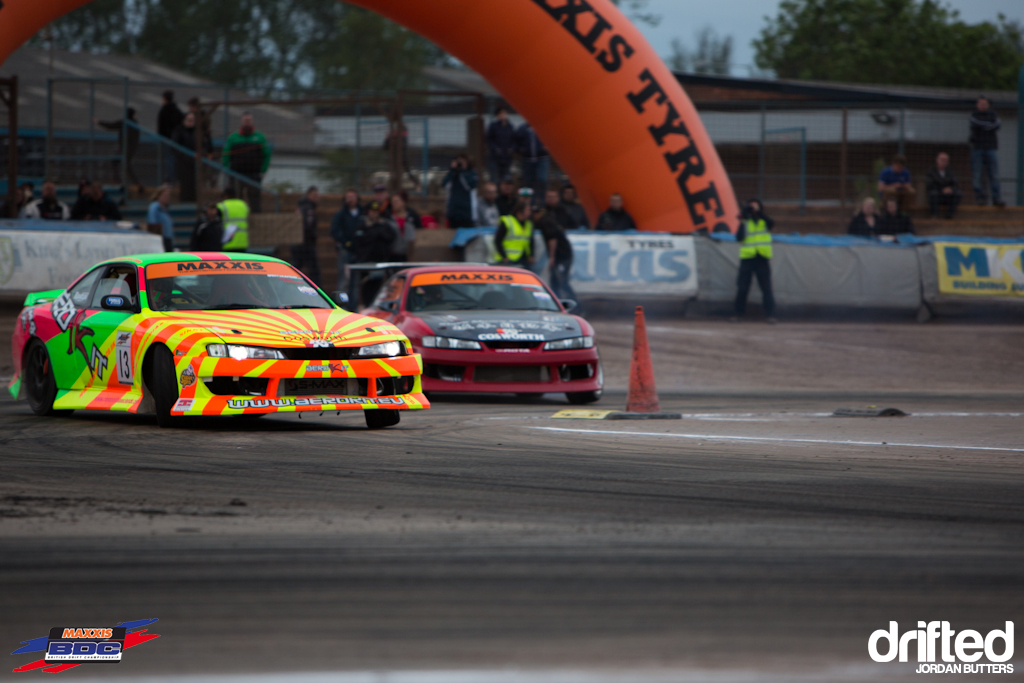 The final place in the Semis would be taken by Steve Moore in the red S14a after chasing down Danny O’Brian in the luminous S14a. Danny’s latest livery certainly grabs the eye, although it did play havoc with my camera’s metering system!

As an on-form Paul Smith waits on the start line, Barry Leonard’s S14a rolls into view ready for battle. 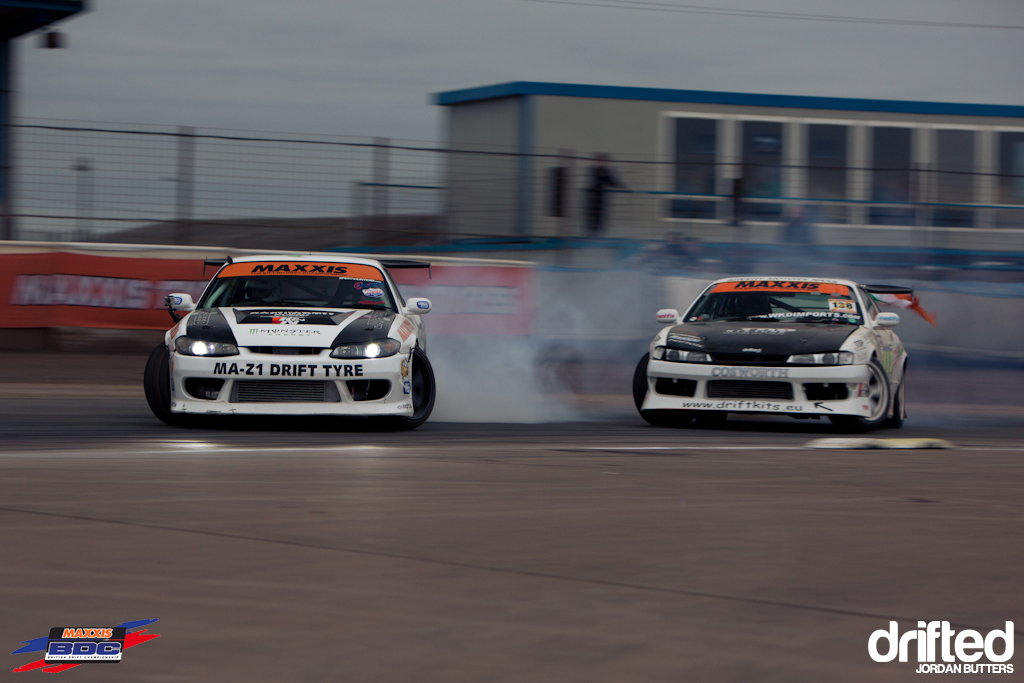 Leonard chases well as always but Smith doesn’t put a foot wrong yet again, making light work of the Irishman. Smith heads into the Finals.

Steve Moore and Baggsy go head to head, with neither driver giving the other any space. Moore annihilating one of the clipping cones yet keeping his foot in, he closed in on the Subaru through the final bend and went on to join Smith in the Finals. Having been ousted by one Japspeed driver Barry Leonard wasn’t about to let it happen again. 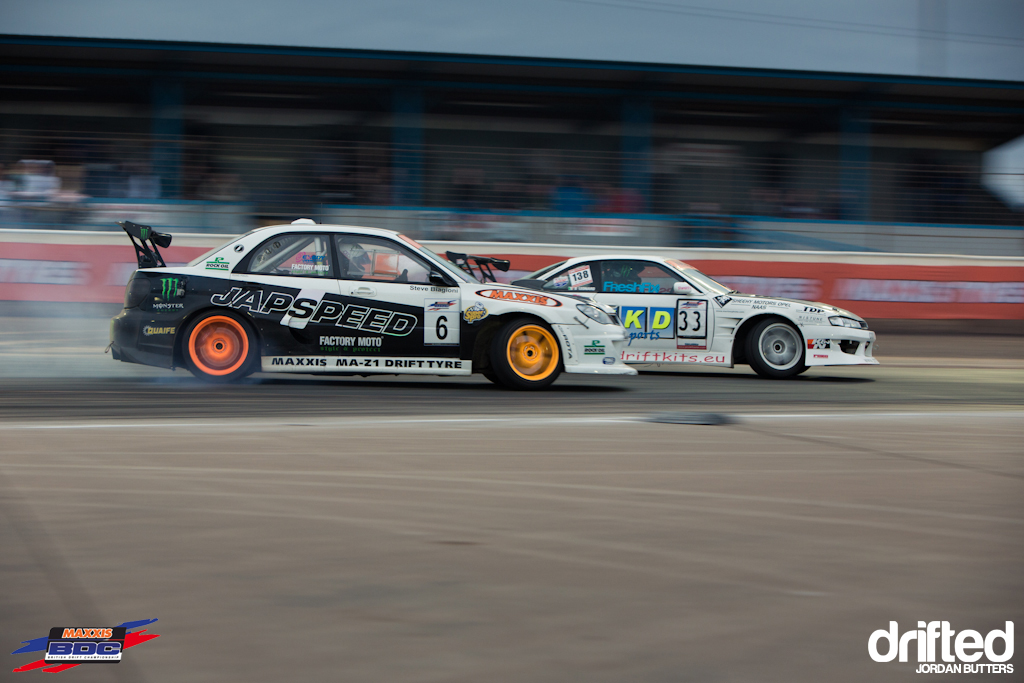 Despite a close chase run from Baggsy, the judges ruled Leonard with the better angle and awarded him the 3rd spot on the podium. 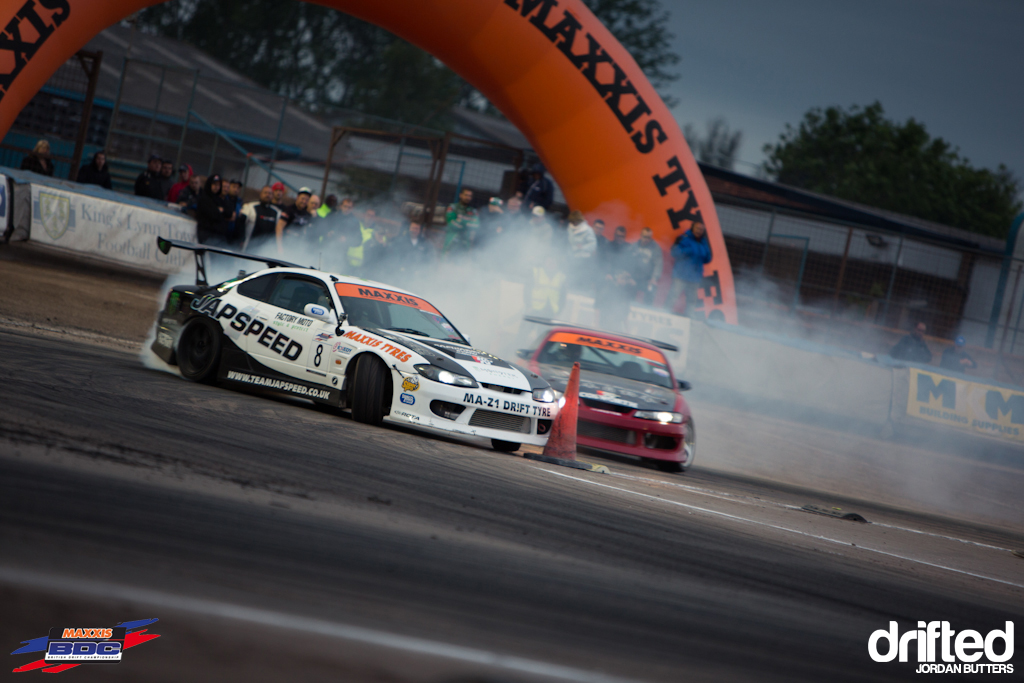 Onto the Finals and straight out of the blocks both drivers are on point. Check out the bumper to clipping cone distance in the shot above – I can assure you that cone did not move!

Moore chased well, matching Smith line for line, angle for angle. One OMT was followed by another….and into Sudden Death. 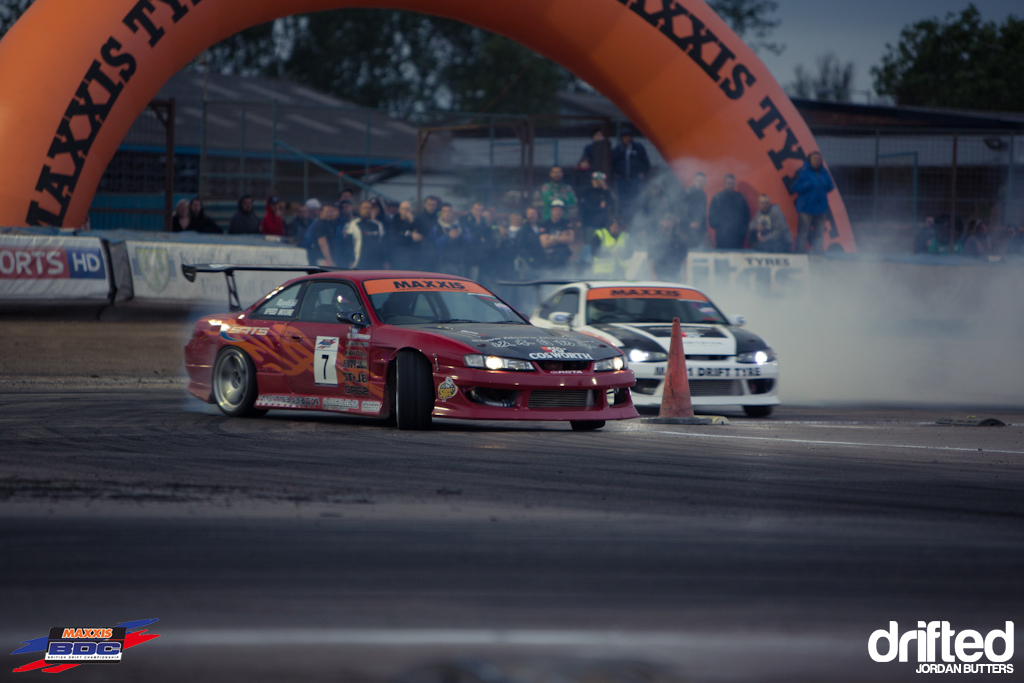 In the Sudden Death runs the most minute of details are scrutinised. Moore puts a gap between the back of his S14a and the front of Smith’s 1JZ S15. 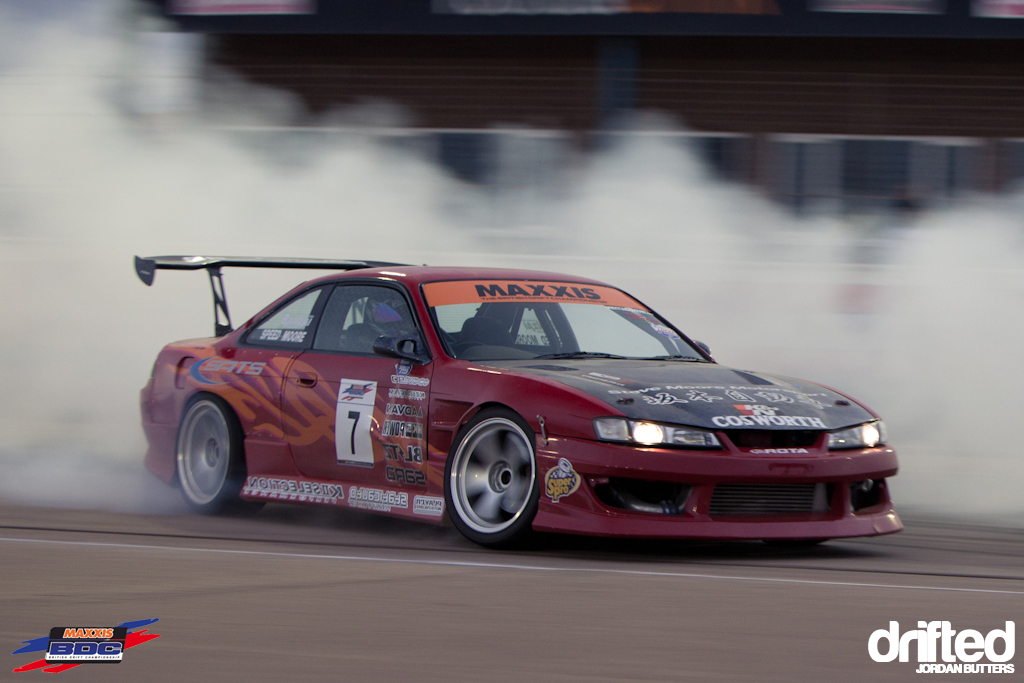 The judges make the call and Moore is awarded the win!

The British Drift Championship continues at round three at Teesside Autodrome, Middlesborough on 29 -31 June.