With qualifying in the bag and the running order for the day confirmed, Sunday morning rolled around and it was game day at Lydden Hill in Kent. A benefit of being up and about before the crowd arrive (and many of the drivers and pit crews wake up!) is that you can make the most of the peace and quiet and scope out the pits and track ready for later on. 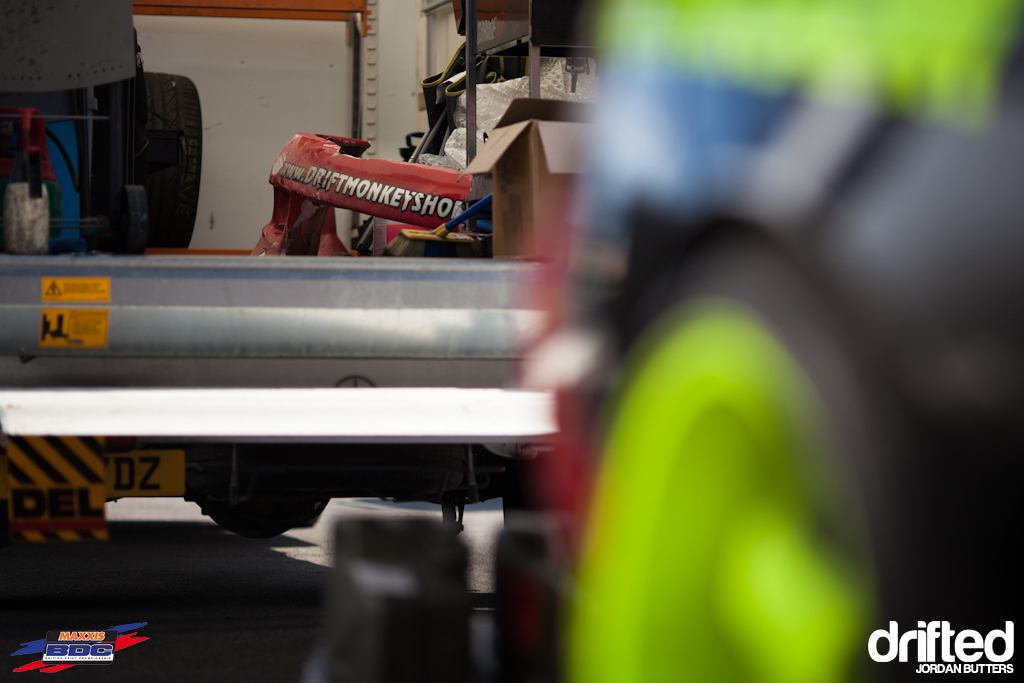 Signs of the previous day’s trials were abundant. Fragments of bumpers, scraps of fibreglass and a scattering of gravel around the place all hints as to who was ensnared by the clutches of the gravel traps.

I wasn’t alone, the tyre guys had decided to make an early start and get ahead of things before the main event started. Off with the old and one with the new, or in some cases, the not-quite-so-old.

Some people didn’t enjoy quite the peaceful night’s sleep they’d hoped for. Tom Bilverstone of Team Dorihero probably wished he’d stayed at home. After blowing a head gasket in practice and replacing it before qualifying on the Saturday, he discovered that oil starvation had seized the cams into the block. Despite a 2am finish and an early start the next day he couldn’t get it fixed in time and had to bow out of Sunday’s festivities. Still, if you’re going to perform major engine surgery at an event, where better to do it than at a circuit with a two-post lift? 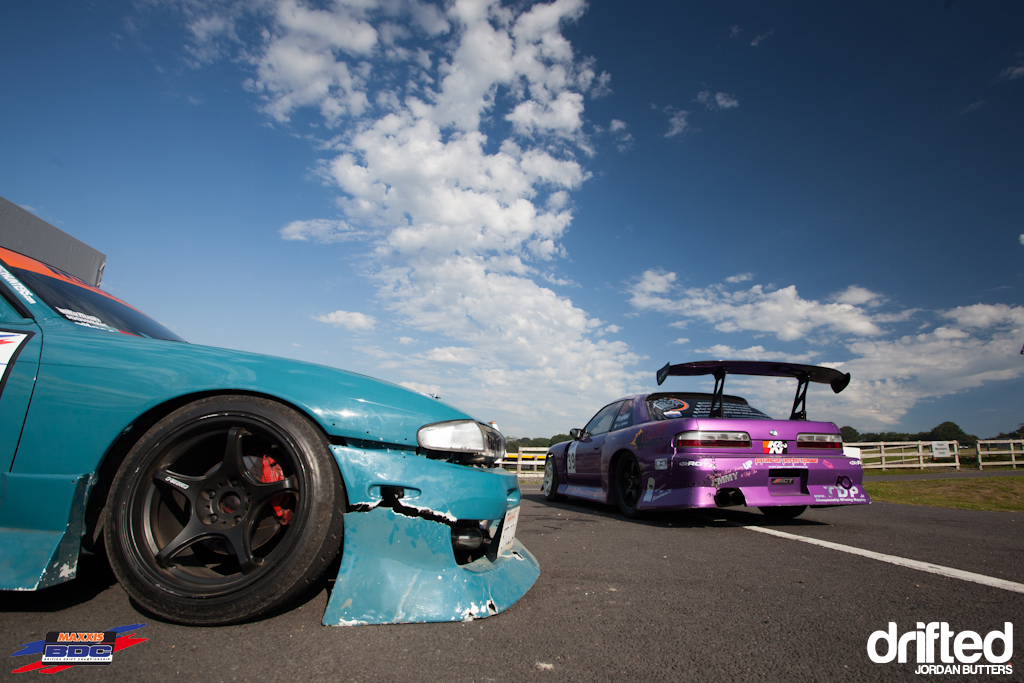 As I walked past the Irish contingent’s pit area there wasn’t a person in sight. They probably had a nice quiet early night and went out early for a brisk stroll in the Kent countryside right?

The usually bustling Team Japspeed camp was empty too. All four Japspeed drivers had qualified for the main event, although due to mechanical problems witht he Subaru, two of them would be sharing the RB25 Monster Energy S15. 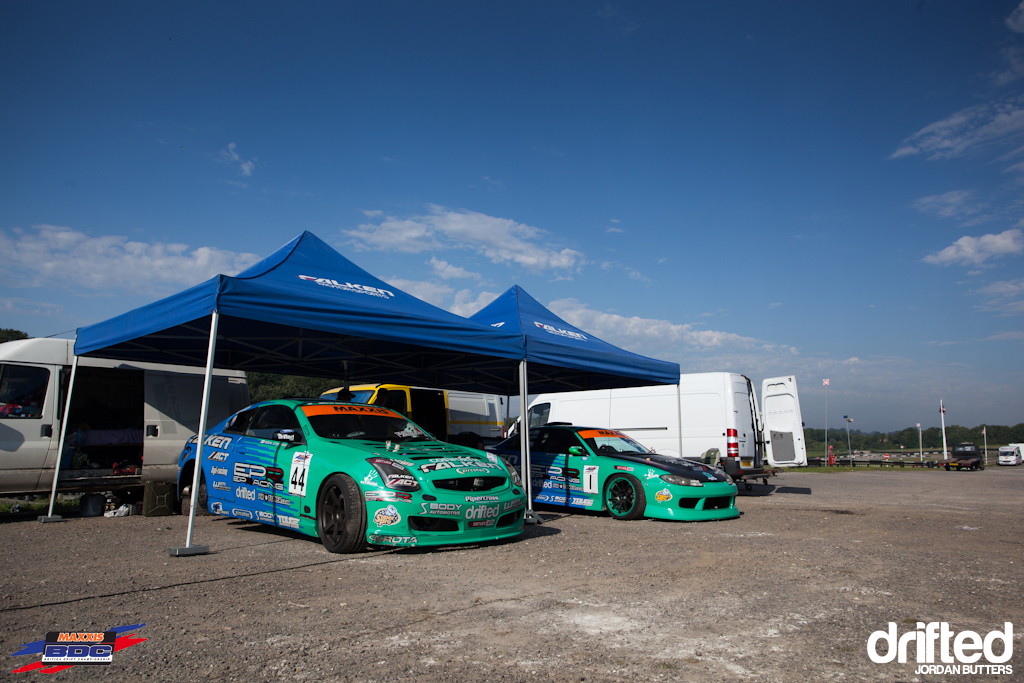 Team Falken UK’s pit area was a car lighter than usual. Alan Green’s SR20 180SX is awaiting a new fully built and forged SR20 engine courtesy of new sponsors Mazworx. Word has it that the new motor will run reliably to 10,000rpm! 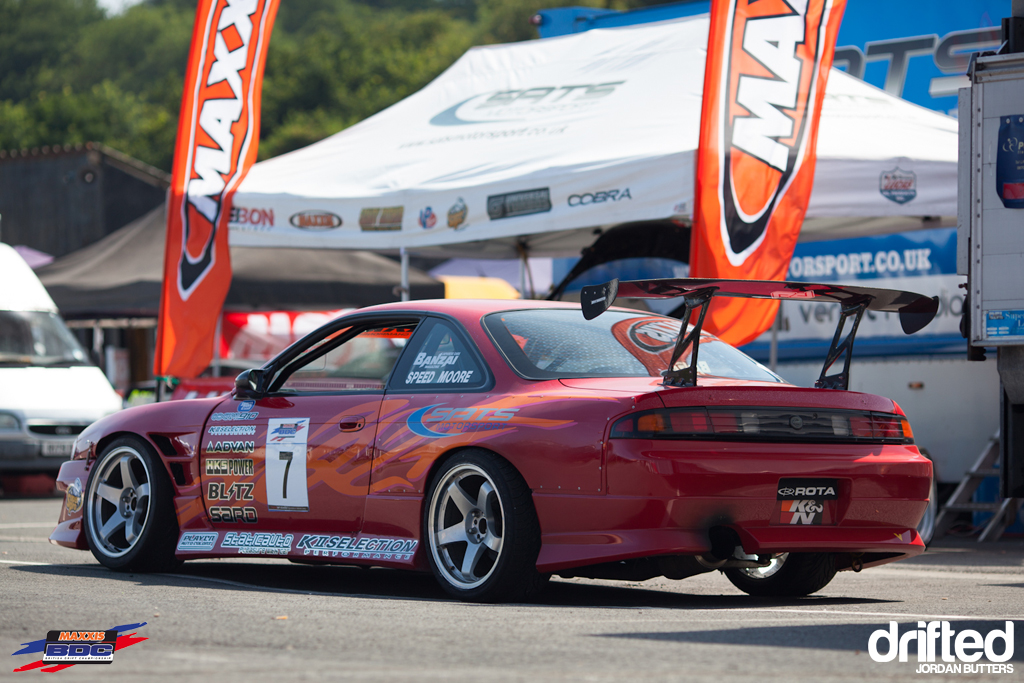 Steve Moore’s SATS Motorsport S14a has remained pretty much unchanged cosmetically since he purchased the car. I remember bumping into  a 16 or 17 year old Steve at Chepstow the day he picked the car up on his way home with it on the trailer. Who knew that a few years later he’d be contesting for the BDC Super Pro title?

Stable-mate in the SATS Motorsport paddock, their world-famous Supra sat glimmering in the morning sun. With 1000bhp on tap the Maxxis MA-Z1 Drift tyres didn’t hold much hope in surviving the day.

Before long keen spectators started to arrive. This clean USDM-style Zenki was spotted in the pits sporting a Drifted sticker. 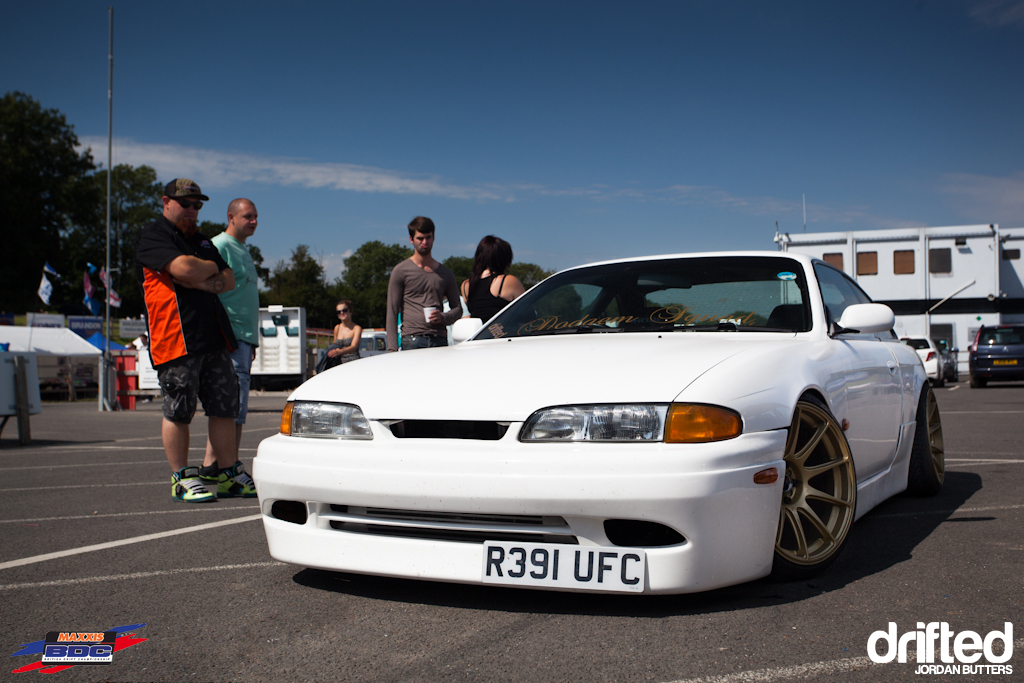 And some perfectly fitted XXR wheels. 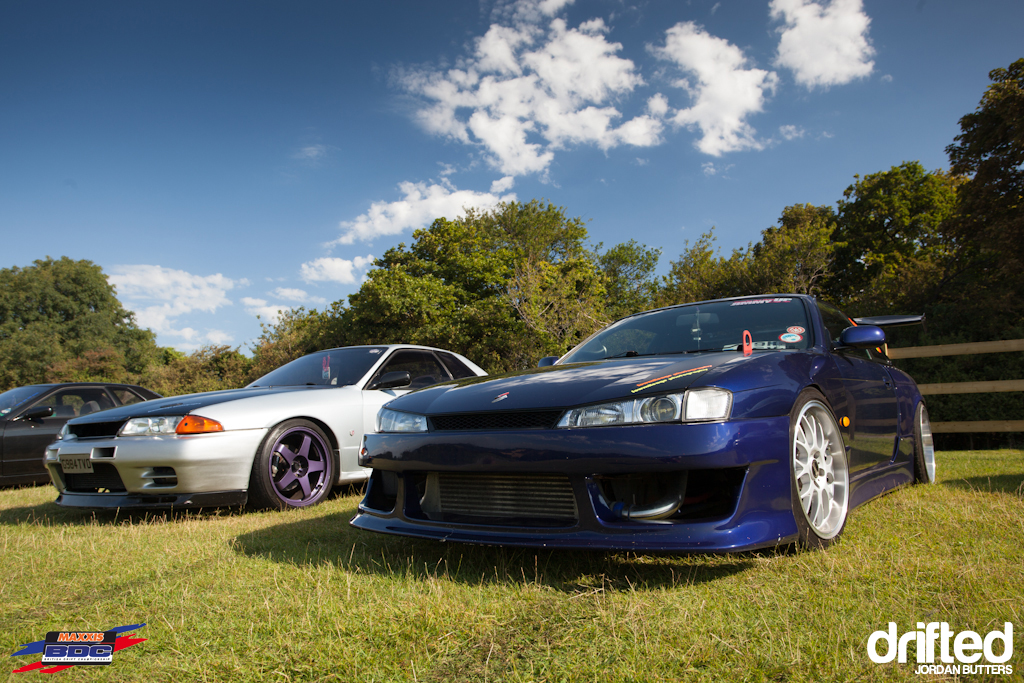 This track-inspired Kouki and R32 combo also looked great rolling in together.

Before long the pits was a hive of activity as drivers and crews prepared for the day ahead.

Last minute preparations and checks are made.

The circuit is swept of debris from the day before, but the previous day’s carnage still leaves its mark.

On the tarmac and on the temporary barriers put down to discourage too much dirt-dropping.

Final checks are made, the crowd rolls in and the battles are underway. 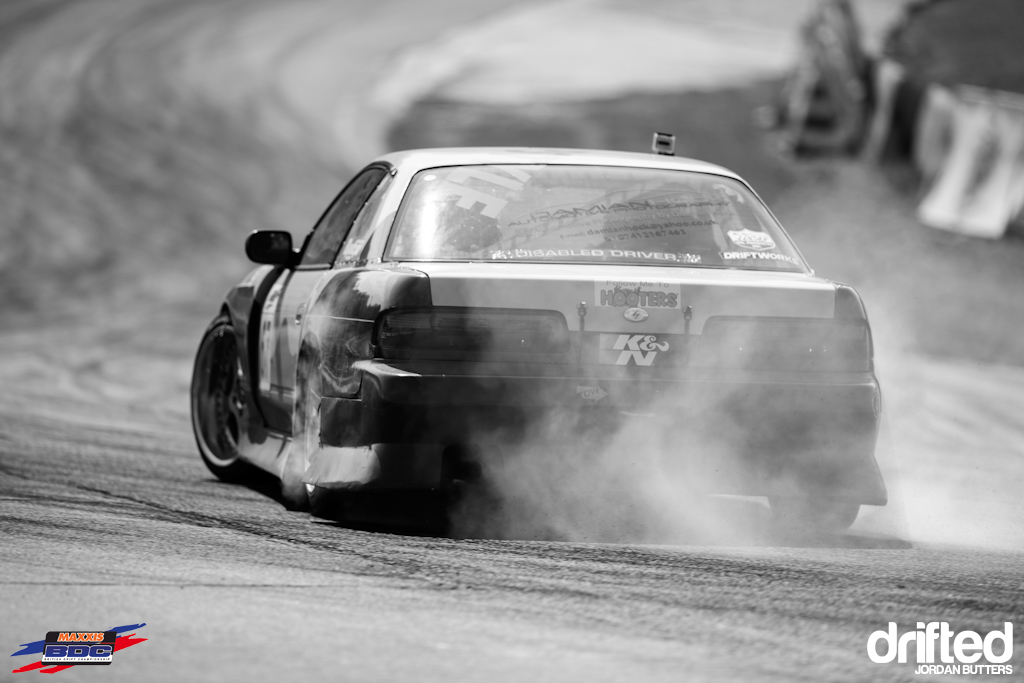 With three classes and 16 drivers in each class it’s easy to dismiss the lower ranks in favour of the ‘main event’; the Super Pro Class, but the Semi-Pro and Pro drivers equally deserve a slice of the pie. 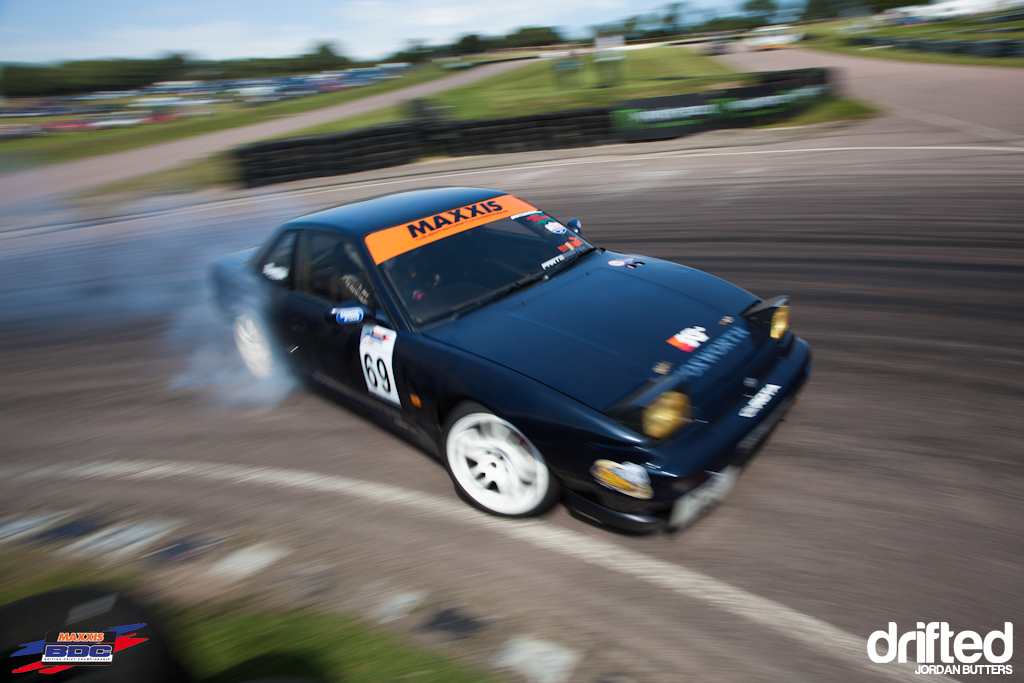 Sure, their car’s might resemble street cars more than competition cars (quite often this is the truth!)

But often it’s the guys in the lower classes who’s journey tells the most interesting story.

The driving sometimes lacks the experience and finess of the top tiers. Accidents happen.

But some would say that the drive, determination and passion burns stronger here than at the top level.

Even at the Semi-Pro level, these guys (and girls) charge hard!

In the Semi Pro Final Jay White of Team MnM and Lewis Cracknell put on a great show for the fans, driving with every inch the aggression of those in the classes above. It would be Jay White who would stand on the top step of the podium, with Bradley Wallbank completing the trio.

It used to be the case that the machinery you’d see in the Pro class was of a significantly lower standard than that of the Super Pro class. Not so any more.

Despite many driver’s budgets and support being much less, at this level most people are realising the importance of appearance.

After all, they want their brand to be associated with a positive image. Half-painted old Nissan’s held together by hopes and dreams (and zip-ties!) isn’t really going to cut it.

The driving standard in the Pro class has stepped up a notch this year too, truly living up to it’s name.

Even when they don’t succeed, drivers now understand the importance of putting on a show for the crowd and cameras. Brian Egan wins the award for the most stylish exit of a circuit in 2012.

Belgian driver Kevin Corsius managed to qualify first at this, his first ever BDC event, his big-flick entries made him a tricky contender to chase into the first corner.

Despite multiple trips into the kitty litter during practice on Saturday, Sam Holt was finally respecting the boundaries of the tarmac in the Voltz Energy S14.

Eventually losing out to James Fuller in a similar styled Rocketbunny S14 in the 3rd-place playoff.

Team Falken UK’s Paul Cheshire found a return to form that had been alluding him since Portugal last year.

His 600bhp 2JZ G35 well suited to the smokey uphill climbs of the course.

Drifted photographer Phil Mann was on hand as support-crew. Although his choice of support vehicle is questionable, practicality-wise. How many 305-width 19″ Falken Azenis FK453 can you fit in an MX5? (The answer is two, just two).

He would meet Kevin Corsius in the final, but the G35 proving not quite nimble enough to react to the Belgian’s unique lines and quick transitions.

Before we knew it it was time for the Super Pro’s to do battle.

The season has been fiercely contested by the top drivers and no-one as yet had taken a clear lead in the championship.

Matt managed as far as the Top 8 before losing out to Mike Marshall in the Team MnM S15.

Another visitor to these shores, Patrick Ritzmann was throwing huge angle and creating ‘hellasmoke’ in his Uniroyal 2JZ E46. 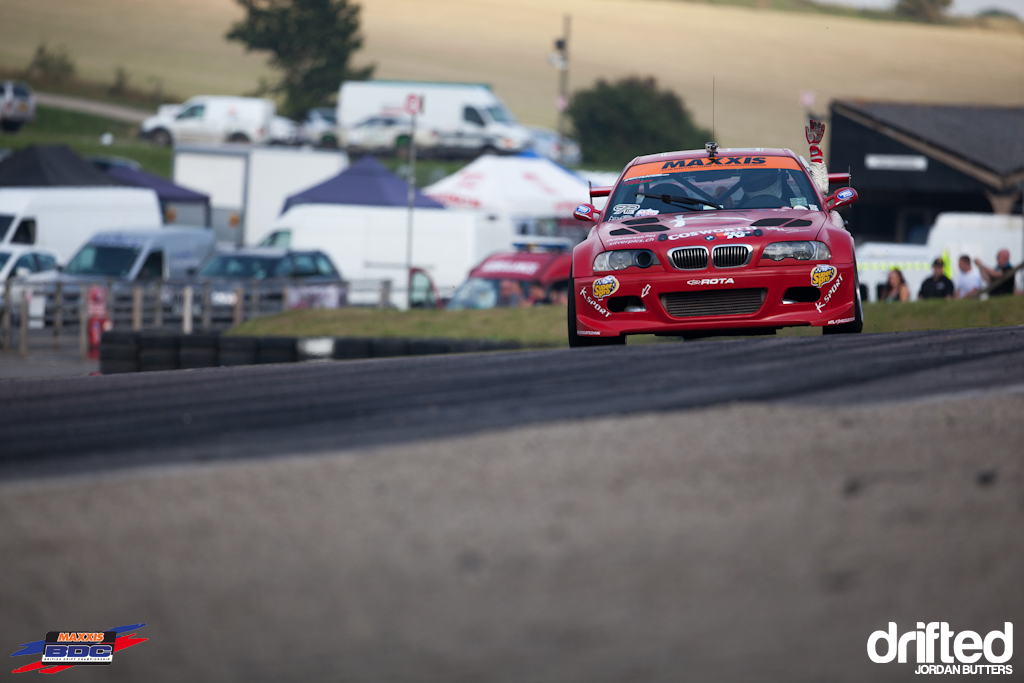 This thing is insane and a testament to Patrick and his team’s engineering skills.

Ashley Stevens of Slide School Drift Academy would meet an on-form Shane Lynch from Japspeed in the Top 16. 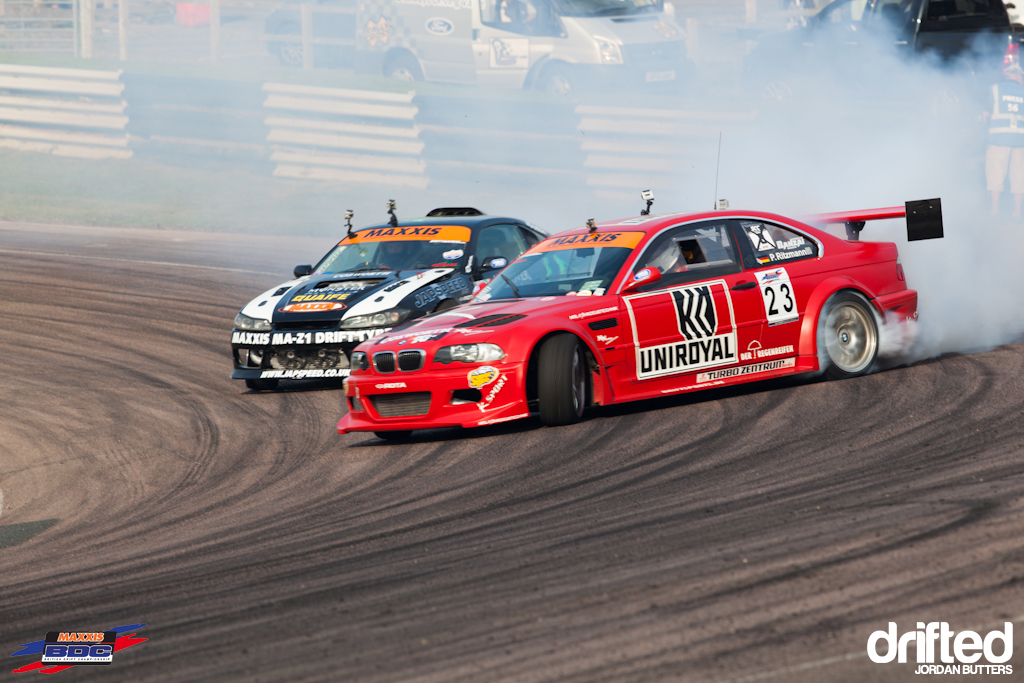 Lynch would then go on to dispatch Ritzmann in the Top 8. 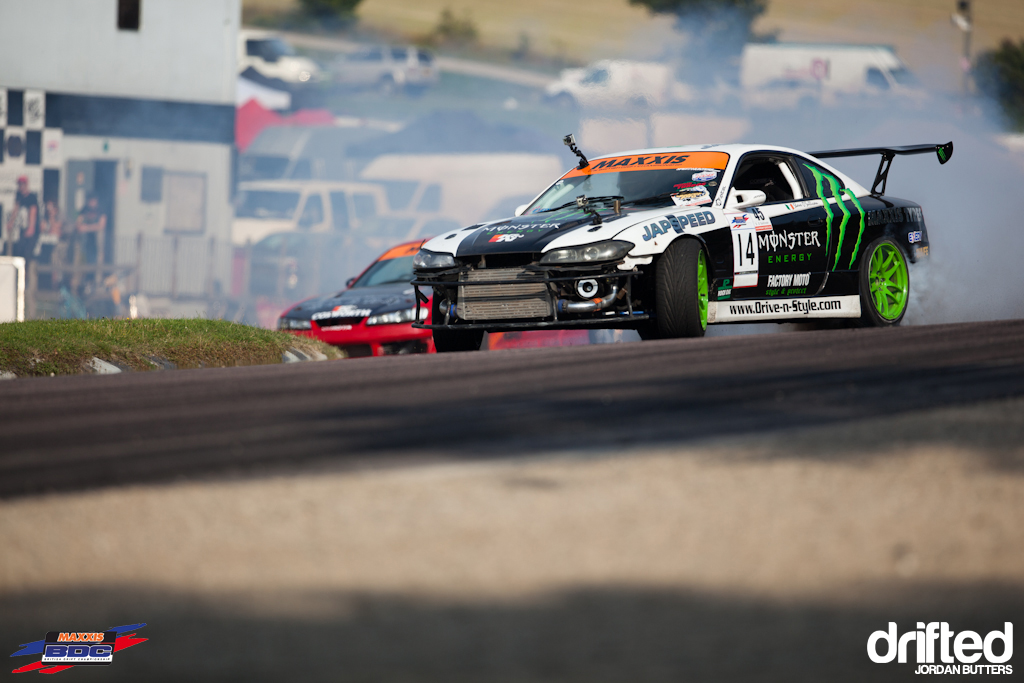 Another surprise early-exit was Mark Luney in the SATS Supra, losing out to an on-form Paul Smith in the Japspeed 1JZ S15.

Smith would then cruise past team-mate Baggsy after he plants the Monster Energy S15 deep into the kitty litter. A little in-house friendly rivalry between the two.

Irish driver Barry Leonard is now well known for his skill during the battle stages. He saw off fellow country-man Shane O’Sullivan in the Monster S15 in the Top 16

Before despatching Wayne Keeber in the gorgeous 1JZ CMR/Driftmonkey Soarer in the Top 8. 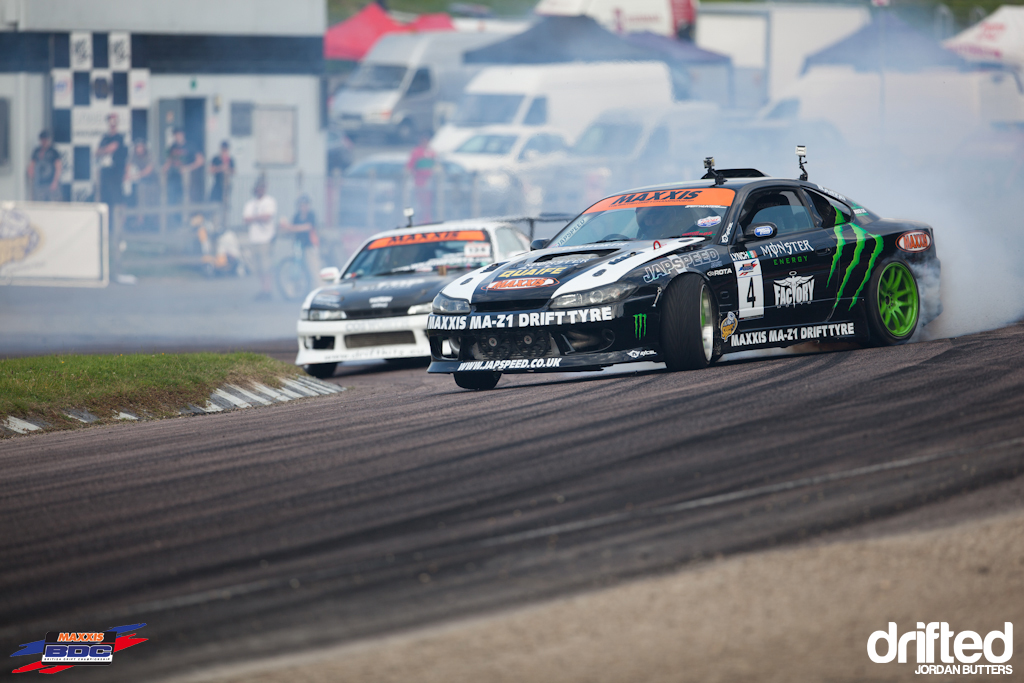 Before finally losing out to another Irish drifter, Shane Lynch, in the Semi Finals.

On the other side of the table Japspeed team-mate Paul Smith secured his place in the Final after Mike Marshall’s event was hampered by transmission problems.

And then there were two; Japspeed’s Shane Lynch vs Japspeed’s Paul Smith. There were no team-orders in place here, both drivers closely matched in the points table and searching for their first win this season. A strong first run from both drivers with Lynch leading and it was all the play for still, with no real difference to separate the two.

But a  major error on initiation on Lynch’s behalf saw Smith pull away and leave his teammate in a cloud of Maxxis tyre smoke.

Paul Smith wins his first podium of 2012 and with the win takes the top spot in the championship going into round five at Silverstone. We’ll see you there!