Arriving in Auckland on Friday for Round 4 of D1NZ, we were treated to an awesome day of drifting under the sun. This round is crucial for the competitors as the smaller track and tight walls can quickly snatch away valuable championship points. Going into this round at Mt Smart stadium some of the big names of D1NZ were leading the table in points – Cole Armstrong, Mad Mike, and Gaz Whiter to name a few. After seeing the big concrete barriers claim some of the pro-am cars earlier in the day however, nobody really knew how the weekend would pan out.

The track was laid out in the carpark of the stadium and consisted of a big entry and sweeper that tightened into a hairpin and follow through section that allowed the drivers to run the wall past the last clipping point. The D1NZ officials even managed to get the entire entry section re-sealed to remove bumps and improve tire life. 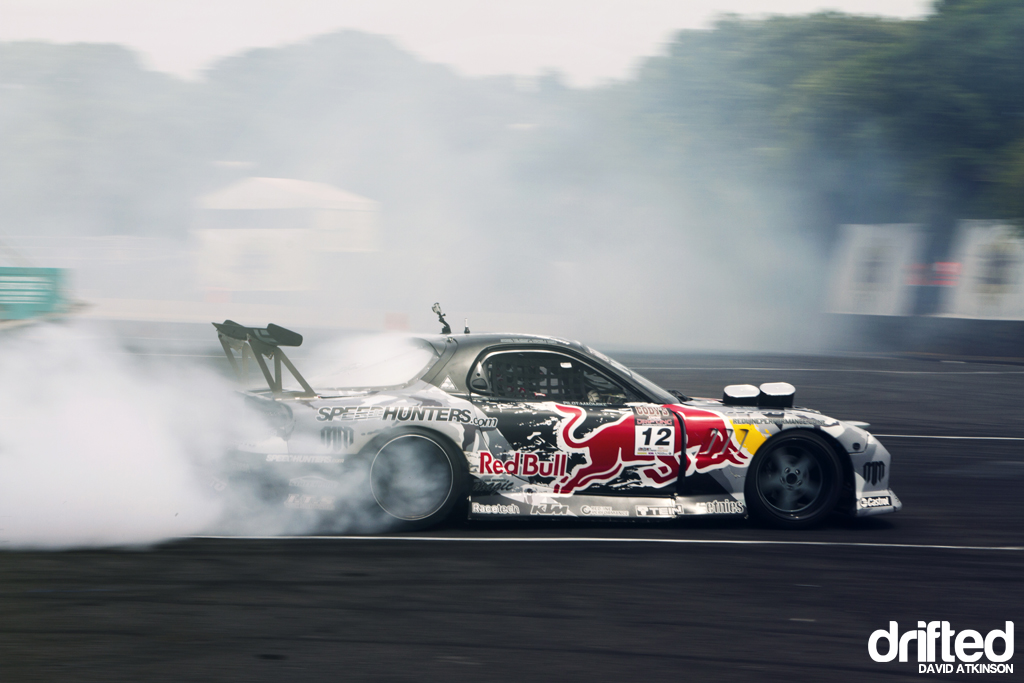 Mad Mike Whiddett’s quad rotor RX7 was pumping out smoke even on the final section of the track.

The bright orange S15 Silvia of Sky Zhao looked great as it hugged the wall around turn three.

Gaz Whiter holds a lot of experience on the track and is always one to watch, laying down consistently good laps over the weekend. 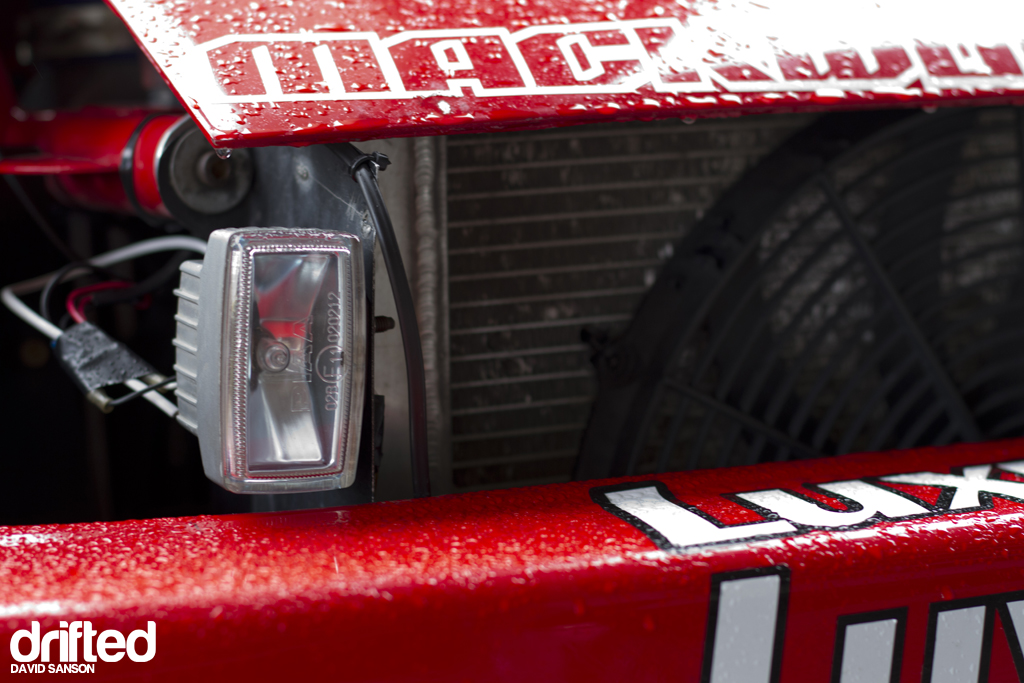 Round 4 is the unique night round, with battles starting late into the night. We noticed new lights had been fitted to many of the cars. 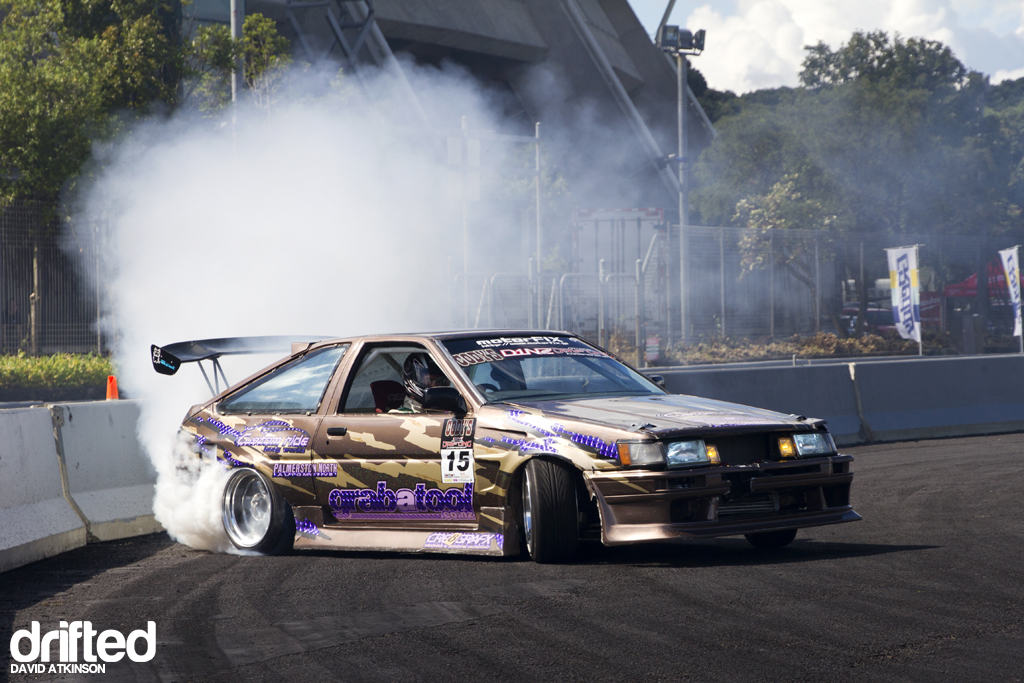 The drivers were getting pretty close to the wall even during the practice sessions, trading paint against the clipping point. Standing here was a great vantage point but did result in being showered in bits of tire and smoke.

With the small size of the track drivers were using large GT style wings to help improve down-force. 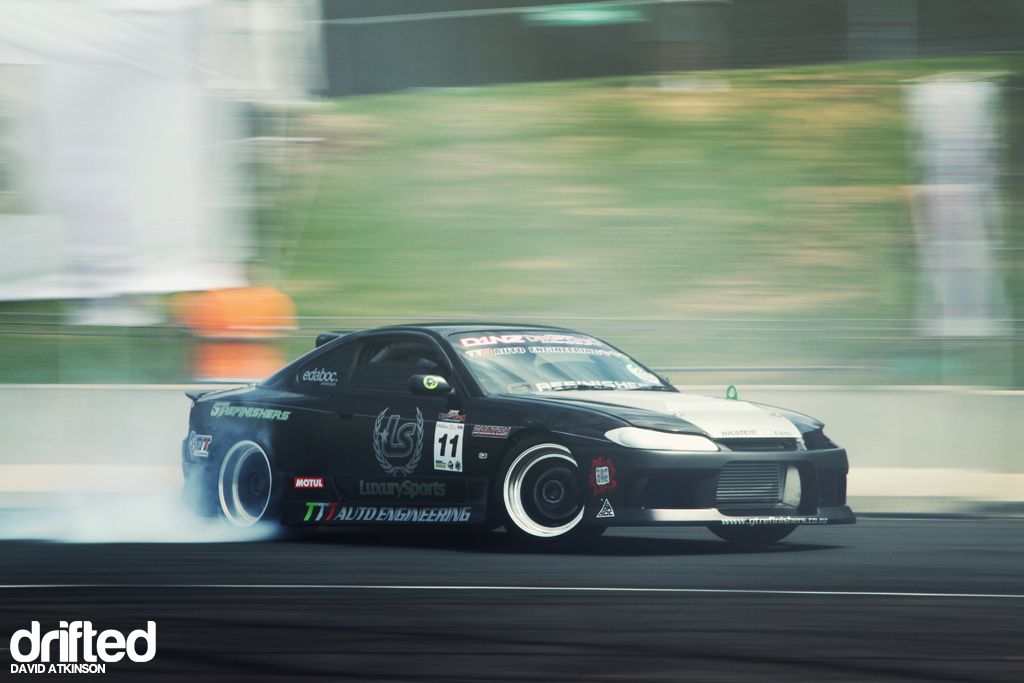 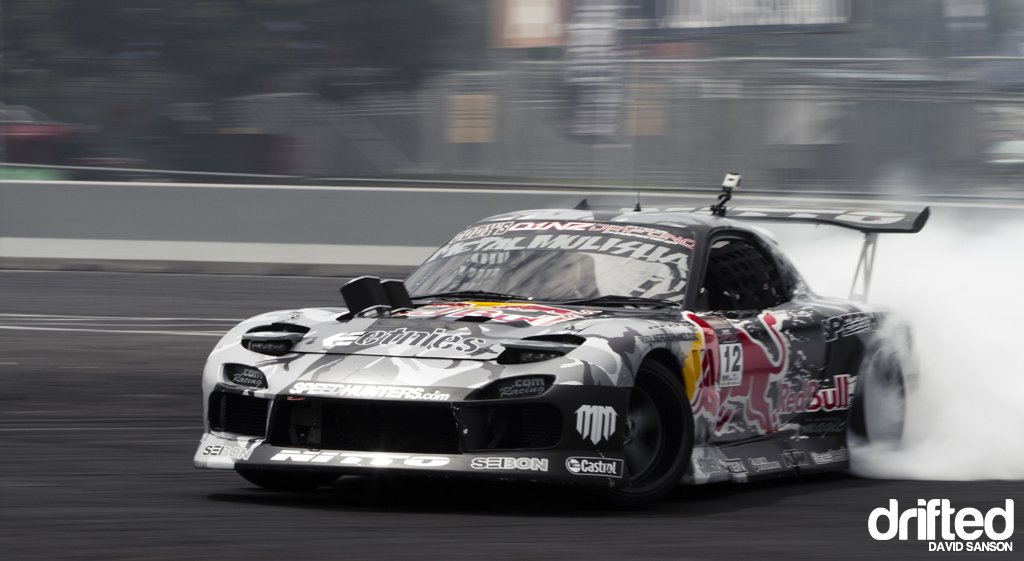 Fanga Dan, Mad Mike and Cole Armstrong were all pushing hard during practice and aiming for the walls. 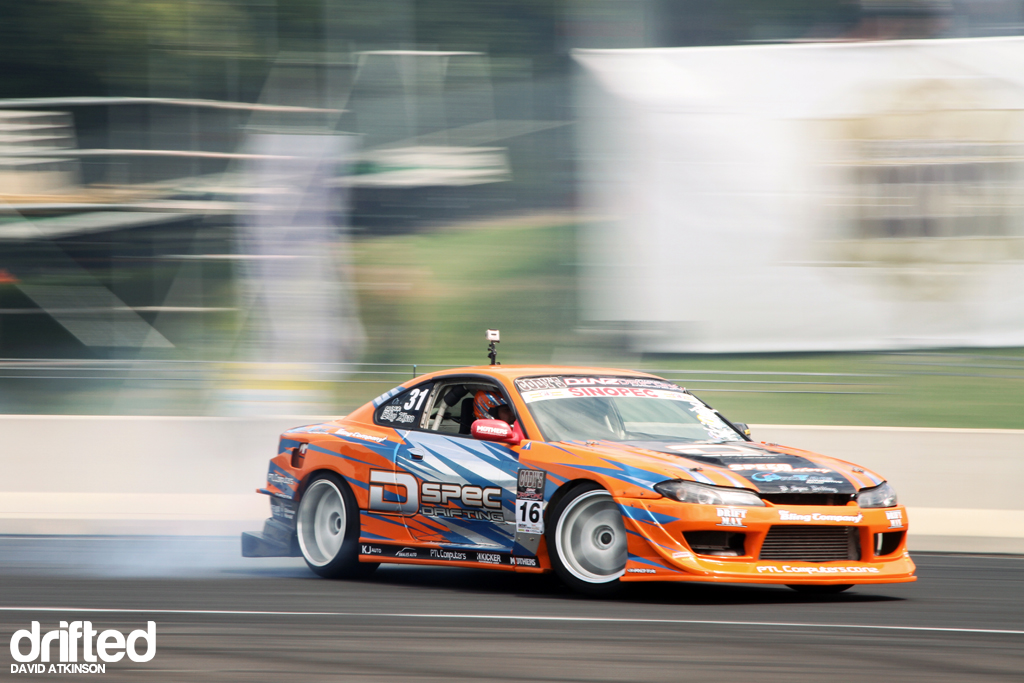 Curt Whittaker in the black R34 Skyline cuts a corner and sends some cones flying above. Later in the day the drivers went out and built a small tire bank to mark the inside corner.

Bradley Lauder in the Alcotane S14 was making the sweeper look easy as he transitioned into the hairpin corner.

The drivers were tapping the wall on the clipping points resulting in bumpers flying everywhere. 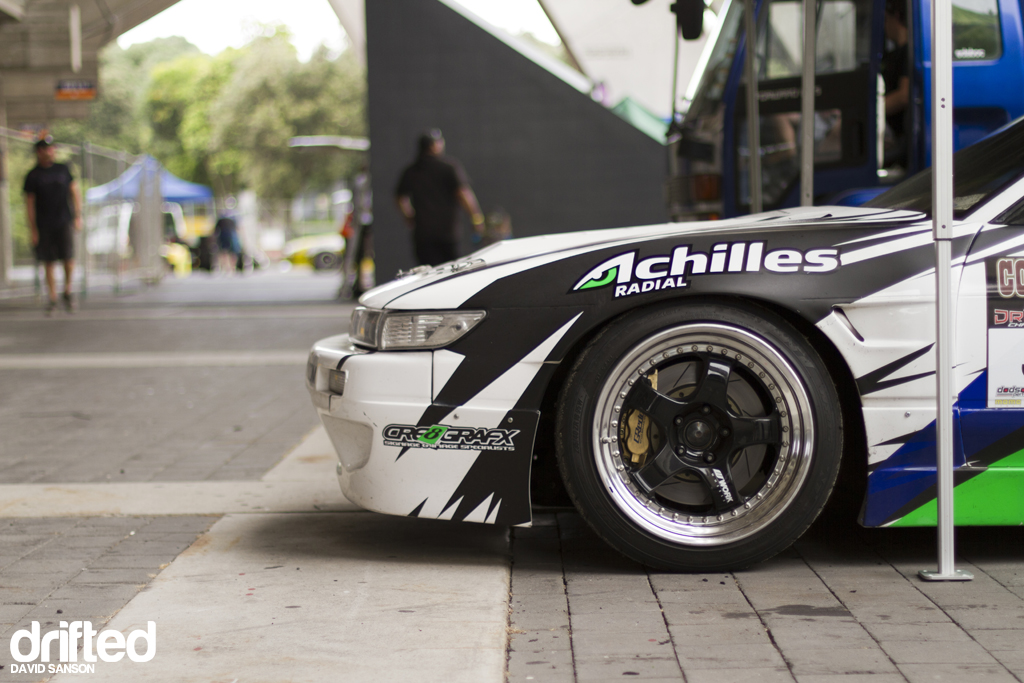 The side of the stadium was being used as the pit area, allowing the teams to get out of the harsh sunlight.

Hugo Maclean’s 13b rotary powered AE86 was making a lot of noise and he was getting some sweet angle too.

The stands were very close to the first corner allowing the crowd to see all of the action. Daynom Templeman sends some smoke their way, above.

Nico Reid was hitting the first sweeper at high speed in his all black S15 Silvia. 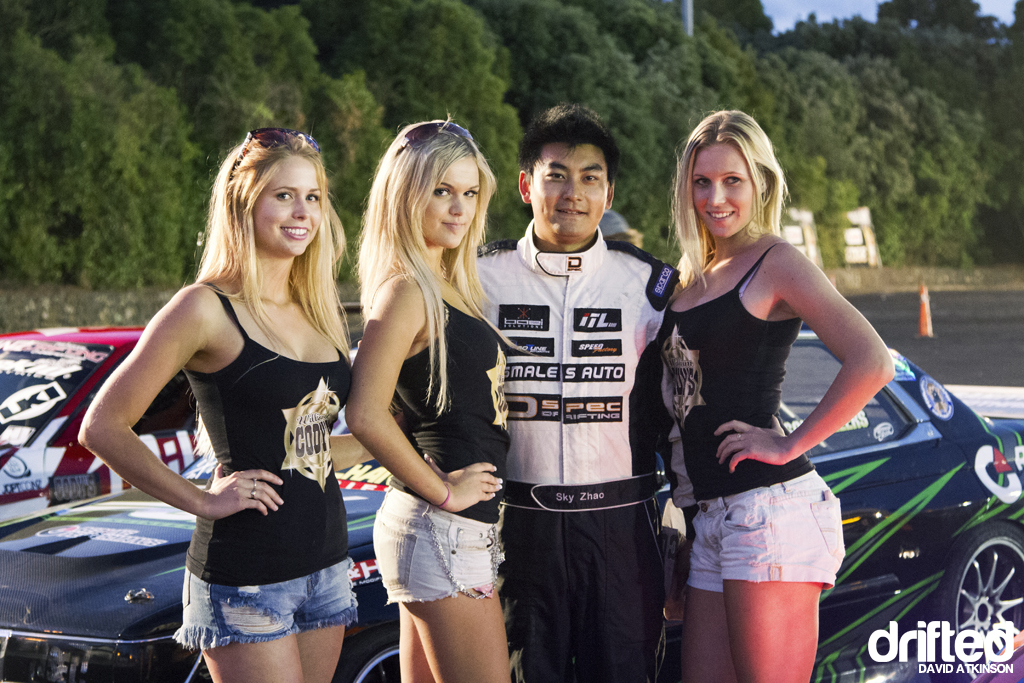 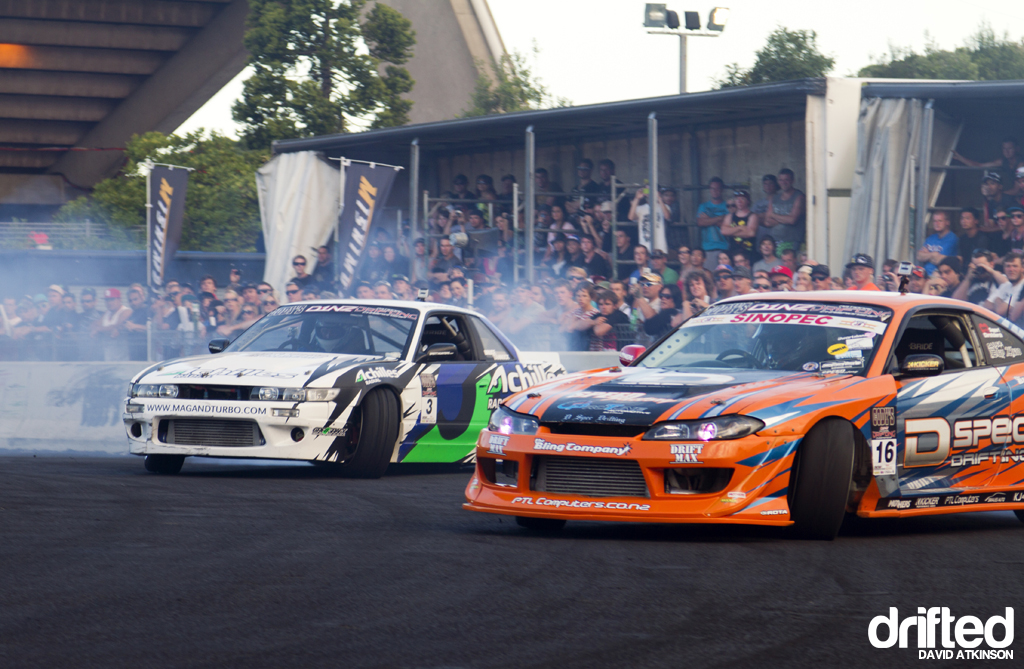 After a quick grid-walk, the top 32 battles began just as the sun was setting at Mt Smart.

Here is one of the few shots we have of Andrew Redward with both bumpers attached, he really was running the wall all day.

Darkness quickly covered the track and the lights were fired up. Darren Benjamin was looking confident in his C35 Laurel.

Seeing the cars drifting toward us in the darkness was definitely a cool experience.

It was surprising to see three time champion Gaz Whiter fall to Bradley Lauder after a small mistake in angle caused him to stop on his last chase run. 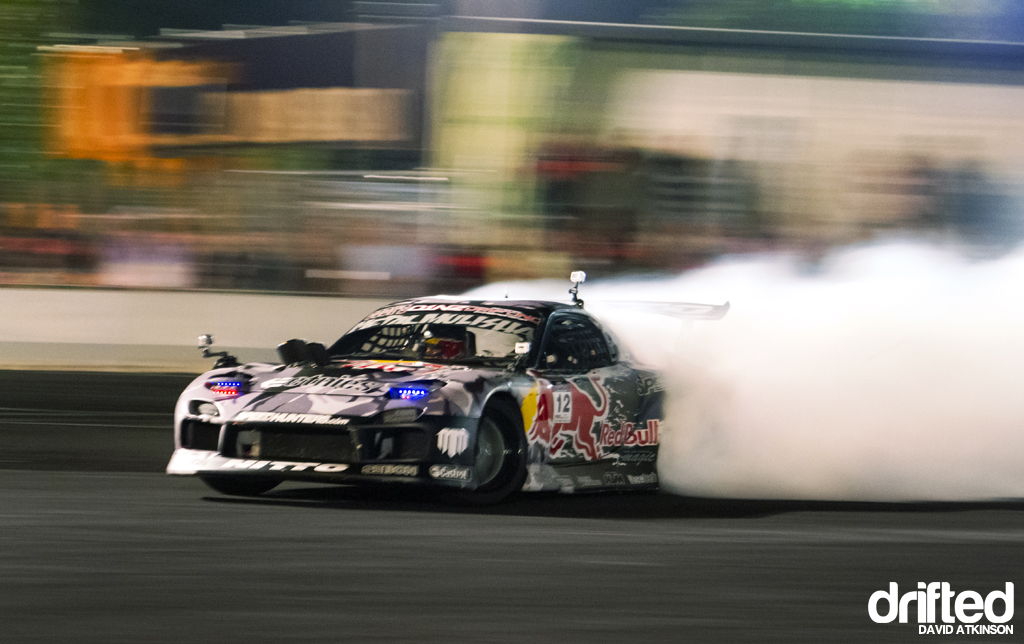 The moment of the night had to be the battle between D1NZ-Pro newcomer Darren Benjamin and veteran Mad Mike. After a few runs that were too close to call, the round went OMT. After another close chase run Mike spun giving Benjamin the win.

Curt Whittaker was looking like one to watch as he beat Andrew Redward’s Nankang S14. 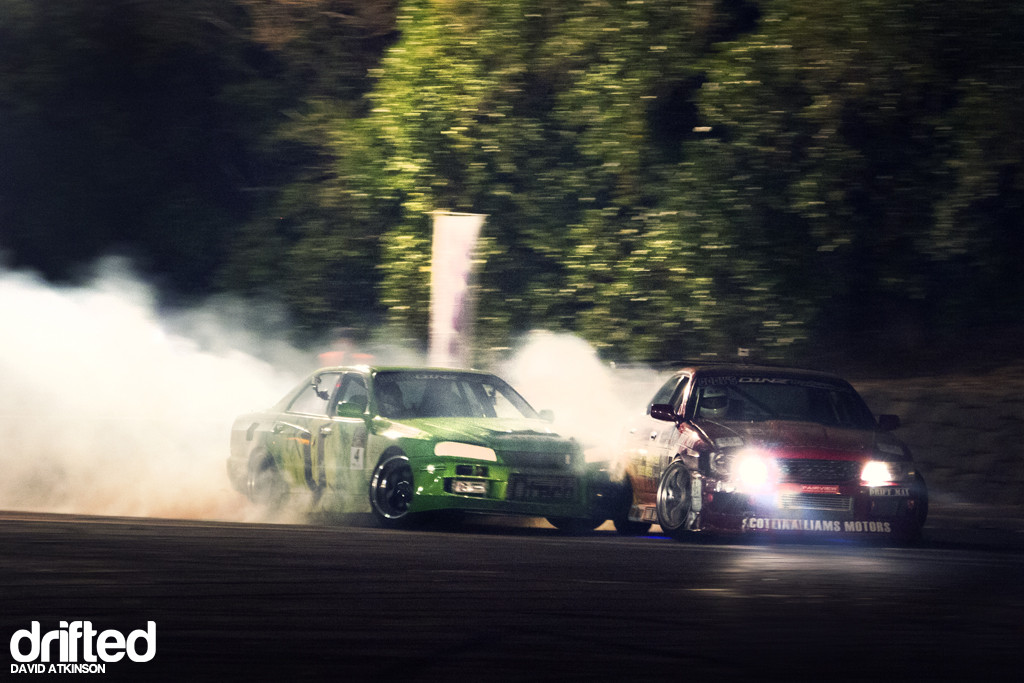 Cole Armstrong in the V R34 Skyline battled Darren Benjamin, putting pressure on the Laurel but making contact and backing out due to mechanical issues. 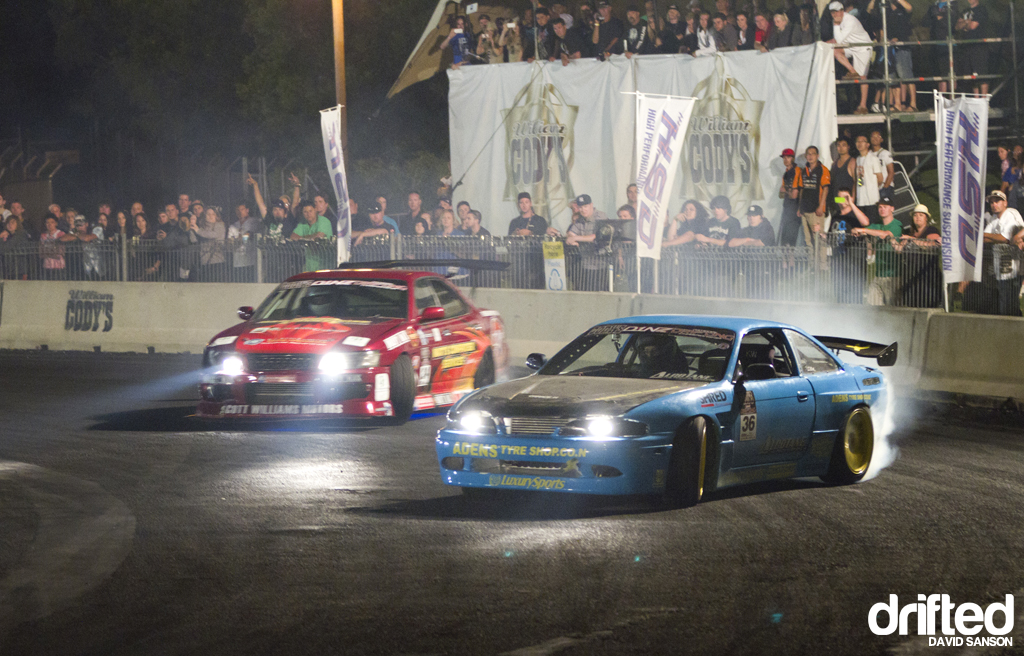 Bradley Lauder in his Alcotane S14 was on his best form of the season, earning him a place in the final battle with Curt Whittaker.

Consistent driving as usual by Curt Whittaker saw him fly through the battles to take top spot on the podium. Curt was pushing the car to the limits of the track, getting great angle and speed all day.

Curt Whittaker claimed 1st, with Bradley Lauder in 2nd and Darren Benjamin in 3rd taking his second podium of the season. It was a well deserved win from Whittaker, and both Lauder and Benjamin will be pleased with their placings too. Overall it was another day of great motorsport and we look forward to the Round 5 street course in Whangarei.