I have to admit, going to Hungary I’ve had split feelings - on one hand we had an opportunity to see how our (EEDC) drivers look going against “Drift AllStars” , probably the best drivers in Europe, a Hungarian drift culture which always had a lot of sexual content within it, and a worrisome night stage on a track which from videos looked slow and narrow… I was not sure what to expect.

But after a 1000 km once we got to the place all doubts  just vanished 🙂 The place was awesome! When you are in the camping area you literally have to travel 20 steps to the track, to the bar or the shower (shower facilities where very important because there was 35+ degrees heat all weekend), or to your own bed in the camper, well actually my sleeping bag stayed next to it on the grass both nights we’ve spend here… And the track - it was not slow at all , latter on drivers had proved that the first corner can be attacked at speeds well over 130km/h , but most important it has “wall” (bank) all around it , and spectators can safely stand , in some places, about 2 meters away from the cars flying by , seems like you could almost reach them… and I did tried - only with GoPro on a stick 😀 I felt like the Rally fan in Portugal in 80s in Group B’s golden years 😀

Well the “stage” was perfect, the lineup, of cars and drivers how gathered, promised – fierce battles right “from the bat” and no holding back, and the fact that, during drivers parade to the center of Mariapocs, the mayor, heads of the local church and even nuns have come to give there blessings and wish good luck “to those how are about to fight”, promised - the atmosphere like nowhere else!

Saturday, last training sessions are over, qualification is over, time for our long awaited Top32, I get up to the judges tower and I see that I can not see 😀 I mean – it was like looking for your car in a full parking lot only under the moonlight (full moon and clear sky)… I was really scared, but that was the first impression, after a few minutes my eyes got used to the dusk and… what a view! 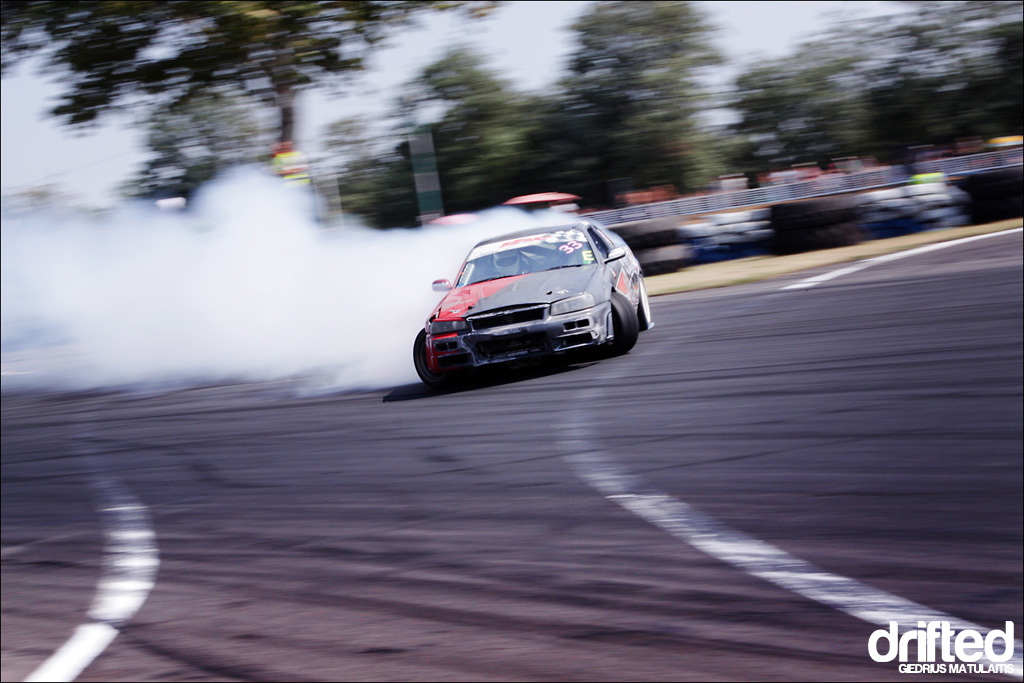 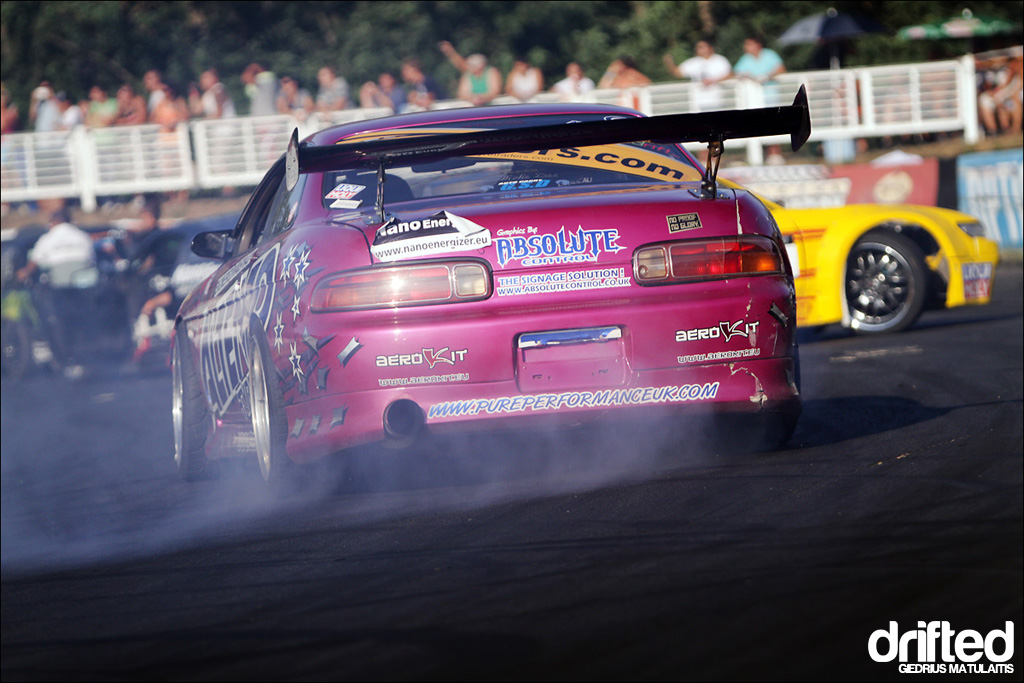 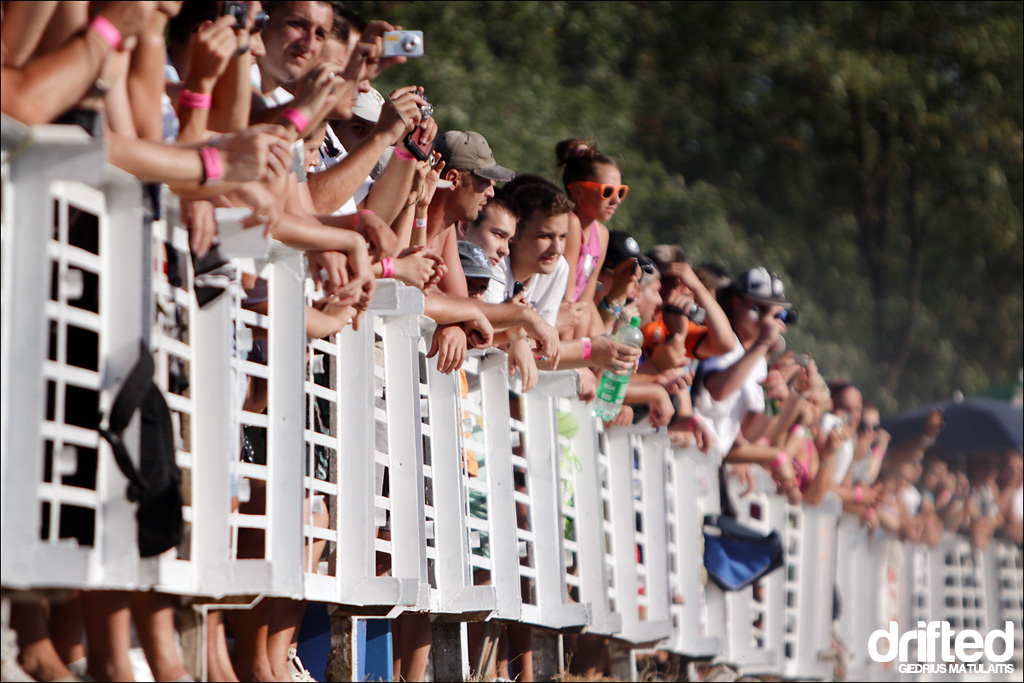 I will not try to cover all tandem battles that went, there where plenty to remember, especially considering that in such lightning the perception of speed and distance is completely deferent than on daylight and it only ads to the fact, that the commitment, skill and sometimes, simply – size of “Cahonez”, shown by the drivers, was just - “mind blowing“,   there where a few that consider some of the best “tsuiso” I’ve ever seen: Nigel Colfer vs Juha Rintanen - after waching a certain amount of runs on the same layout your eyes get used to a speed on which cars travel, with these two I had to readjust my vision to be able to keep up 🙂 first half was too close to call a winner so we sent them to “one more time”, this time Juha on his lead run does the laws of physics denying entry and this way nocks Nigel out of rhythm, so after they switched Nigel had to pull something more but slightly miscalculates on kiss the wall sone… Juha advances…

A few super aggressive tandems by Kristaps Blush (2011 EEDC and FXOpen challenge champion), but being a bit too aggressive is like wielding a double-edged sword, one can cut him self fairly easily … And Dmitry Iljuk vs Juha Rintanen : When Juha was chasing  (the first part of there battle ) it probably was THE Chase run of the year or maybe one of top 3 in my judging experience (7 years)… but on the lied run he did a mistake on initiation which caused Iljuk to gently tap Juhas car… well google the videos of this battle… must be seen 😀 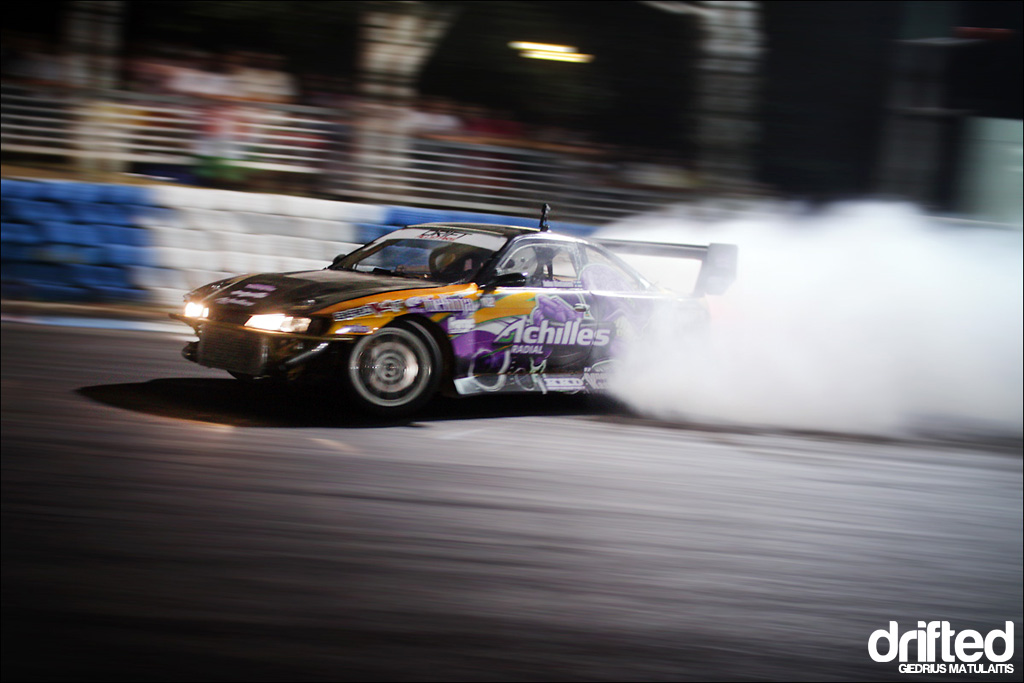 Huge thanks to Szabolcs Berez  for organizing this event, to all three fellow judges Olaf Commijs Netherlands, Arkadiusz Dudko Poland, Haiko Simonian Belarus - this was a hard event to judge but at the same time easy with a team like this! To Faruk M Kugay - for the insight and comments, Niall Gunn - for having helping bring “AllStars” together with “EEDC”, my fellow travelers/friends for tagging along 🙂 and especially – DRIVERS from 14 countries for making this such a special event! Seriously!

Look for the videos from Trackwood festival EEDC/AllStar 2012 🙂 And here’s trip video from our mate NORBEFILMS:

Next stop for EEDC – Poland. Final.