Last weekend the German IDS Series hosted the fifth round of this season at the legendary Nürburgring. The drift race was in the programme of the DTM Touring Car Championship, which was held on the Grand Prix course. This was also the biggest problem, the track we wanted to drive was changed by the DTM organisation at short notice, after dozens of calls and visits at the organisation, we managed it to set up another track, but not as great as our usual one. Due to the change of the track, many driver where a bit upset, because they wanted to practice this track for the European Championship on 30th September-2nd October, after their first runs, they started to accept the challenge! 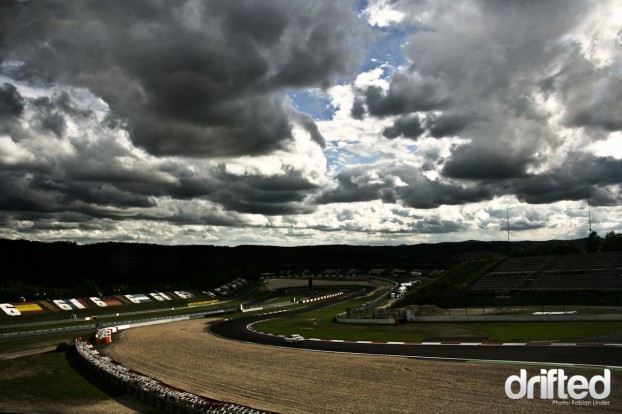 Normally we drive a full lap with the race direction from left to right, but this time we  drove the other way round: “Schumacher-S” downwards and the “Dunlop Kehre” up to the “Ford” corner.

The tricky thing on the new course was connecting the “Schumacher S” and the “Dunlop”, because you really needed to have balls to make high speed (Ueo style) manjis the whole 300m line down to the corner. 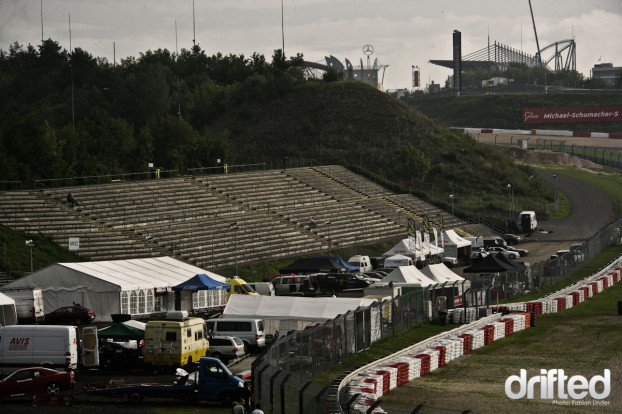 The pitlane with our big party tent, in the background the grand-prix course of the Nürburgring with the rollercoaster. 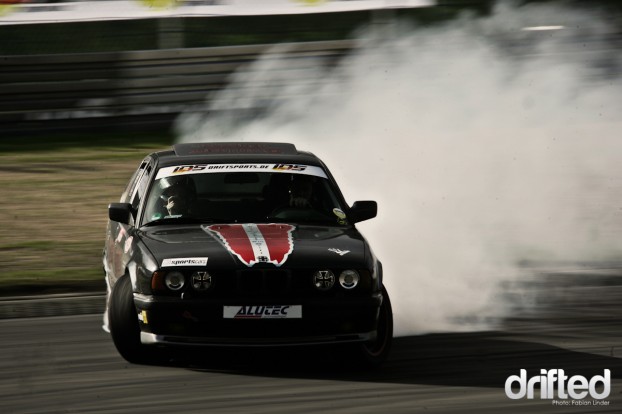 One of the first drivers who felt comforable with the new track layout: Oliver Scheurich aka. “Hesse James”, he rides this M5 as his daily through the streets of Frankfurt. 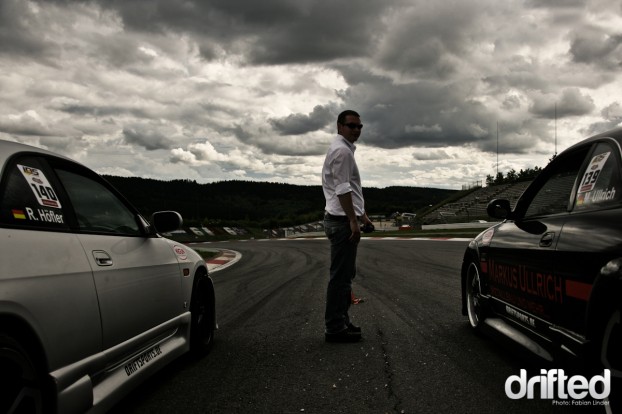 The R33 Squad: Markus Ullrich and Ralf Höfler at the start line, both cars are “streets”. 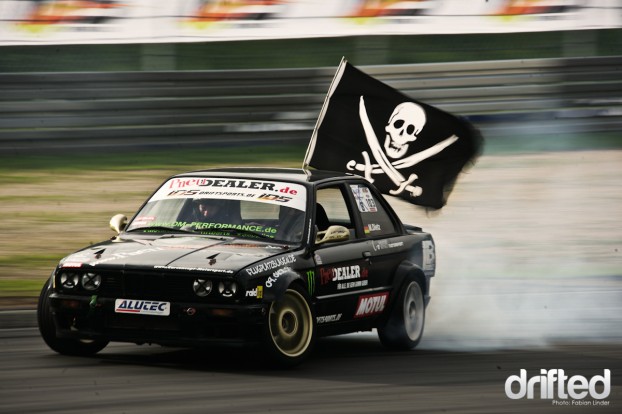 Also a “street” driver: Matthias “The Pirate” Dietz in his E30, the flag brings additinal 5hp when it’s windy. Maybe. 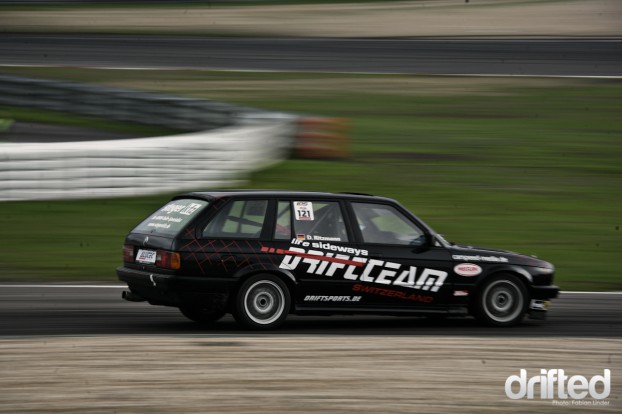 Denise Ritzmann, sister of “pro” driver Patrick Ritzmann had a little accident with her E30 on saturday. She slided along the wall, now the car has some scratches on the side.
After that crash Denise was very sad, her stationwagon is her lil´baby. 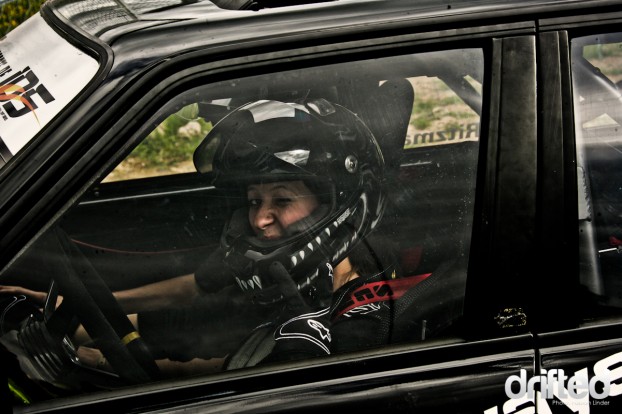 After some minutes among her best friends Denise forgot about the scratches and her smile returned. 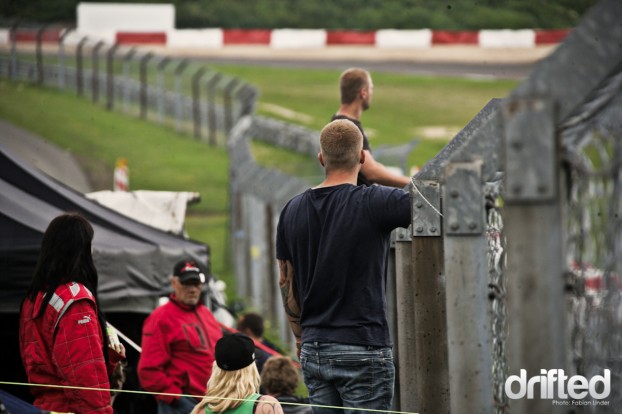 Our Danish guests loved to be as close a possible to the track when some of their drivers compete, so they climbed the fence 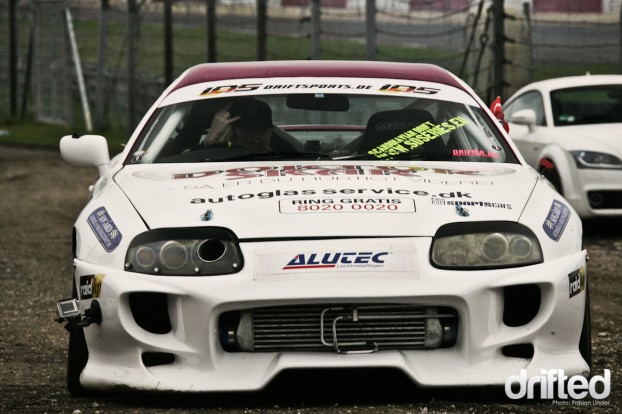 Sara Hagemann and her husband came all the way from Denmark to compete in the Street Class, her single turbo Supra runs perfect. 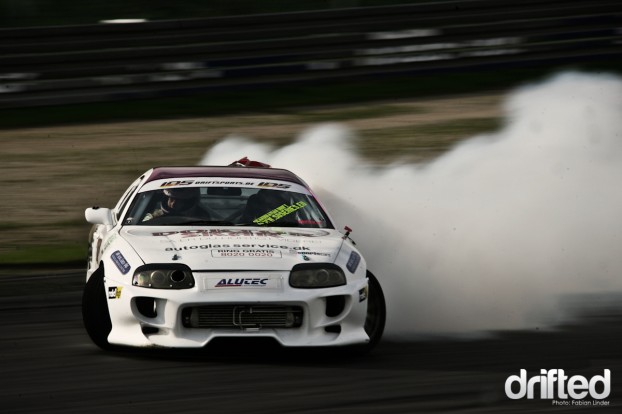 When ever Sara was on the track it smoked massively, the 2JZ delivers 570hp to the rear wheels. 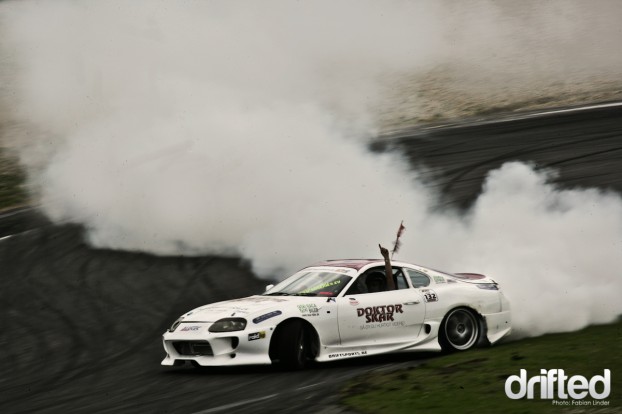 Although she started drifting a year ago, Sara showed this weekend that shes skilled and improved herself continously during the event. 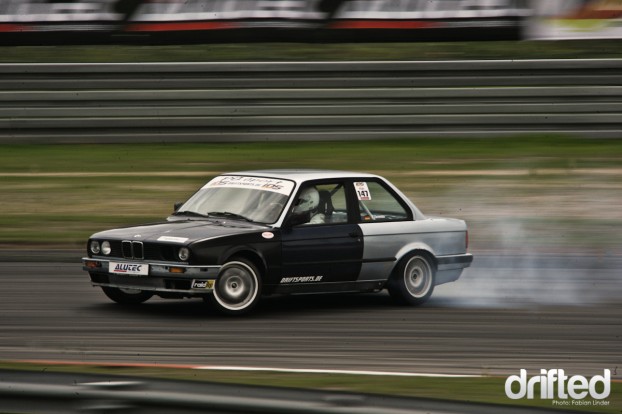 Thomas Zaremba crashed his old E30 in Round 3 at Sosnova (CZ), he finished his new E30 for this round.

It was the car with the least horsepower in the “Street” field, but he did very well and improved his technique alot. 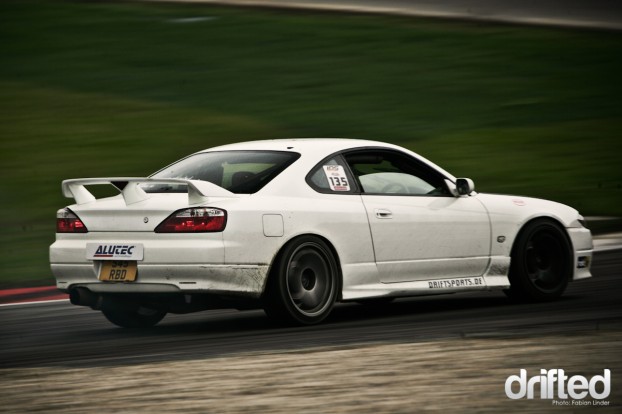 The last time with his S15, Matt was always in the need of more power, in Monza his new ride will debut. 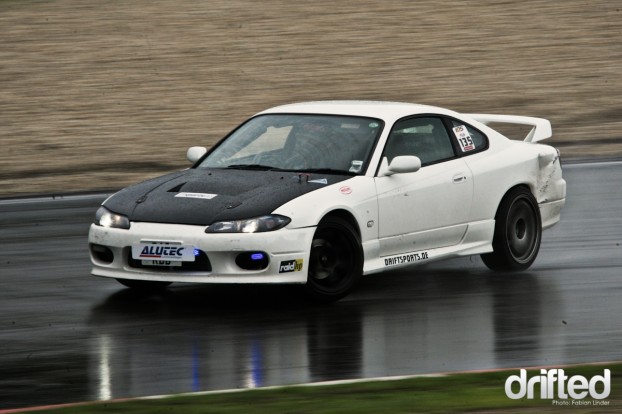 During the Saturday practice it started to rain, that was when Matt mounted his police car flashers on his S15. 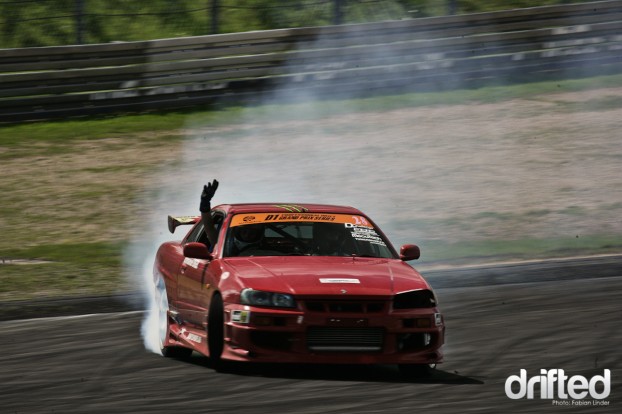 Another Frenchman: Emmanuel Eigel in his R34, he couldn’t drive the Street finals due to engine problems. 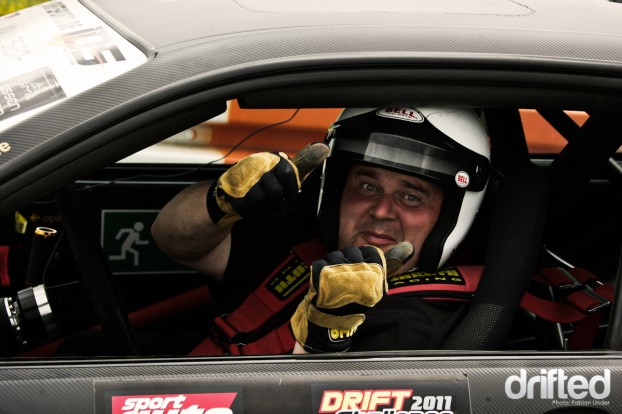 Hans-Jürgen Reiss in his E46 M3 is now second in this season standings. 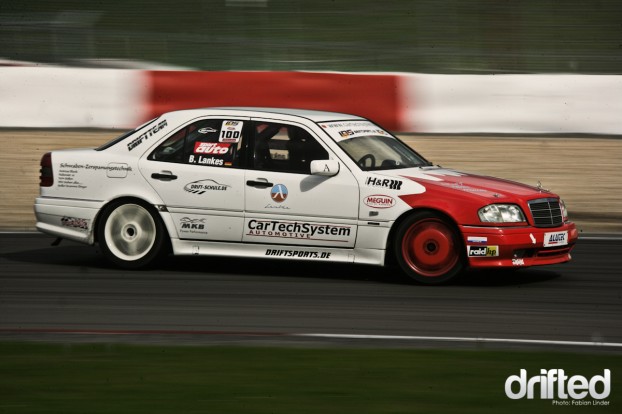 Bianca Lankes in her W202 AMG didn’t feel that comfortable with the track. 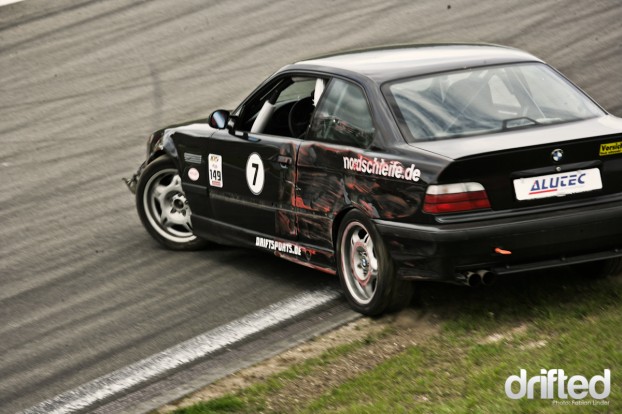 More than just a few scratches…  this street driver slammed in the barrier, no injurys, it was the most serious accident of the weekend. 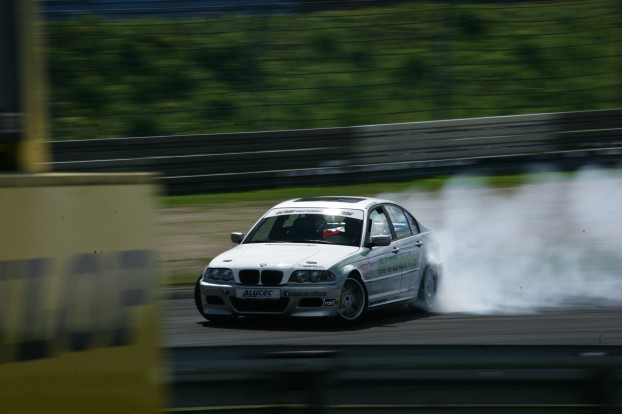 He was the favorite in the Street class: Markus “The Drifthunter” Müller in his E46 330i, but he had problems with the track. 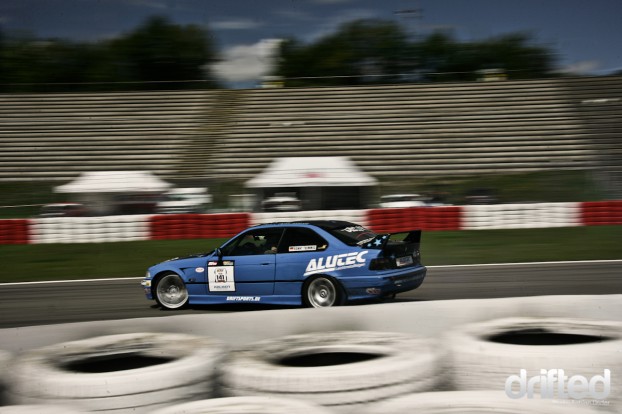 The master of all streets: Ronny Thimmig in his V8 powered E36, he won Street category. 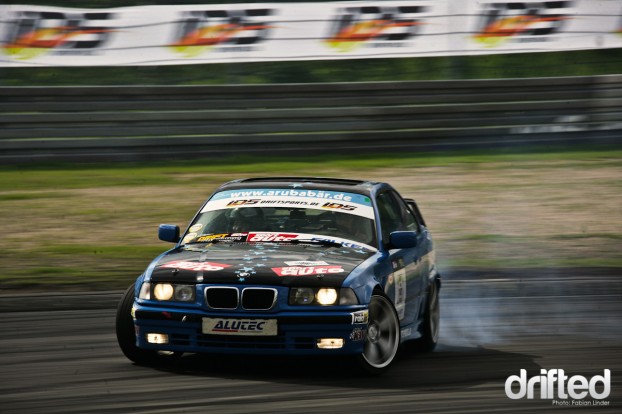 With his skills and his car he could easily get a top ten result in the Pro class, but I think Ronny prefers a win in the Street. 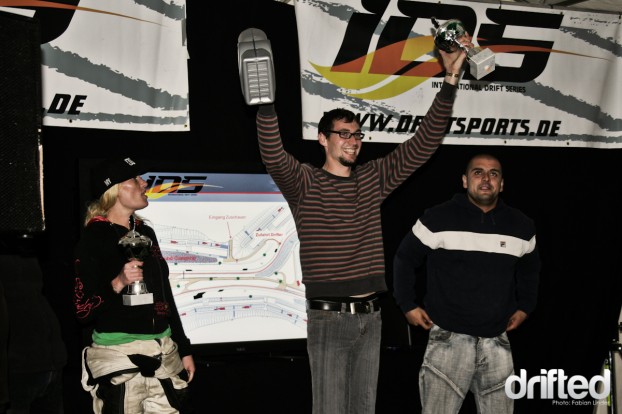 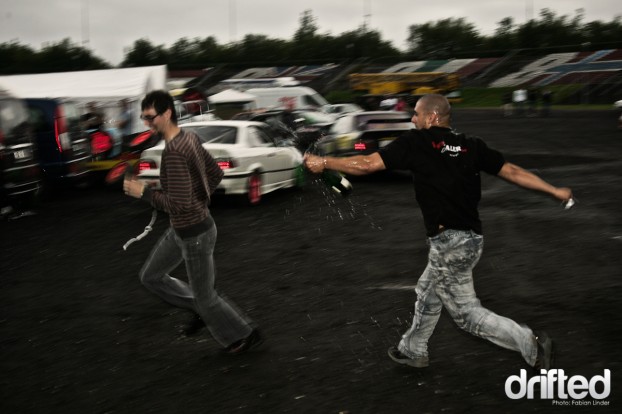