5 Rounds, 150 competitors, 20,000 spectators, 500,000 LiveStream viewers across 150 countries. The 2015 Irish Drift Championship was brought before the world and laid down the law as to why the Irish Drift Champion, British Drift Champion and Drift Allstars Champions call Ireland “home”. It creates a showcase of the pedigree needed to dominate on home soil before moving further afield.

It was fitting for the 2015 season to cullminate in the county Kildare setting of Mondello Park, as the circuit has now become IDC HQ for 2016. It is a testament to the recognition that Irish drifting has earned in recent years and provides a concrete foundation and home base for stepping stones to come.

IDC head honcho Dave Egan has always joked that most of the budget goes towards slipping a brown envelope to Mother Nature. Ireland is known for roaming green fields, Guinness and copious amounts of rain on any given day, but once again Round 5 would see sun screen and ice cream being dished out in equal measure as temperautes soared on and off track.

The paddock atmosphere was palpable from Friday with the prospect of 5 front runners able to claim the 2015 Pro Championship come sunset on Sunday. 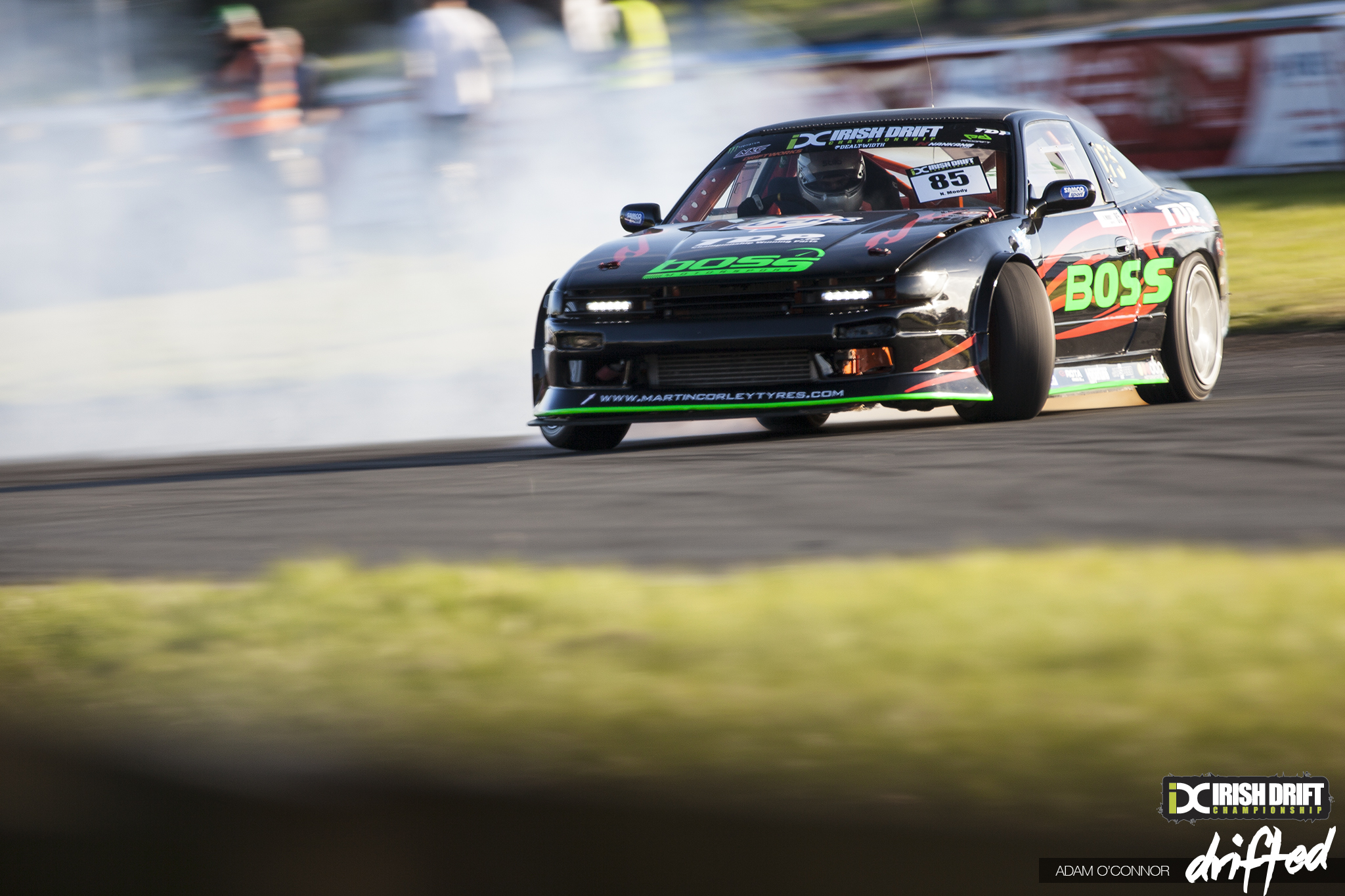 Saturday’s track action was once again reserved for amateur and semi-pro drivers. It is the first time in IDC history that all 3 championships have come down to the wire with silverware unclaimed before the Final Fight. 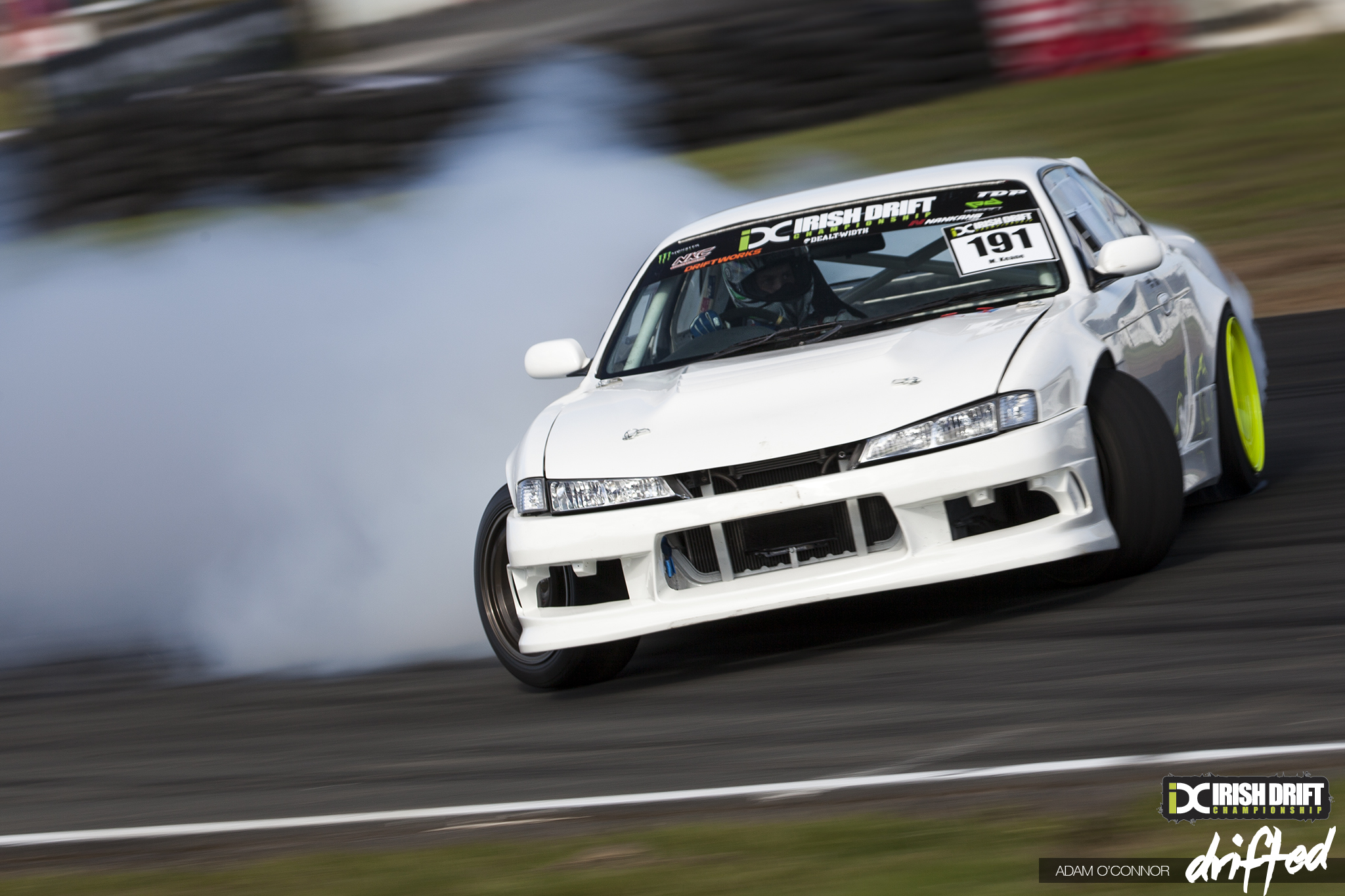 Sequential gearboxes and crate V8s. The quality of amateur and semi-pro cars has risen dramatically within the past 12 months with the line between semi-pro and pro shrinking. 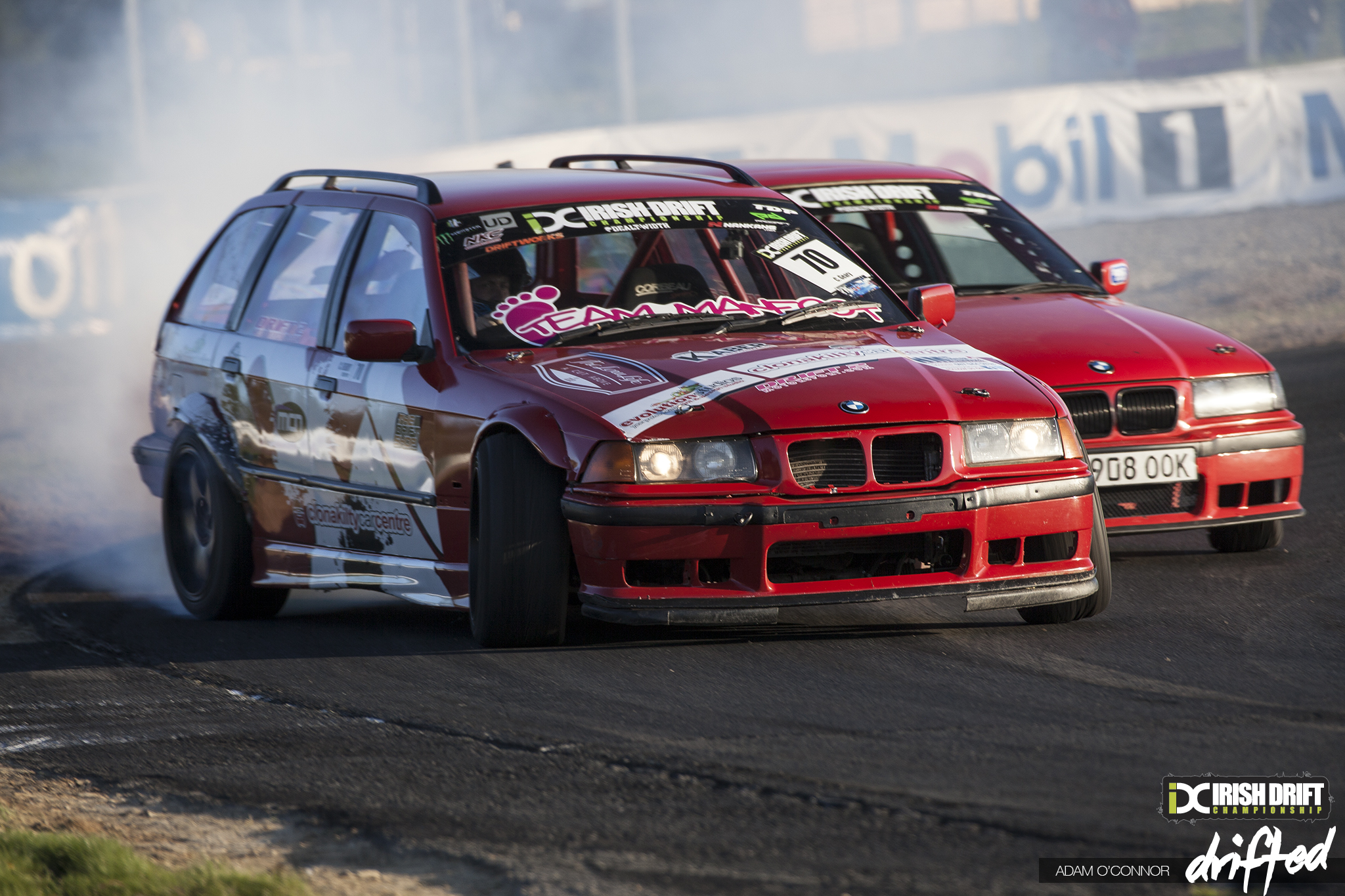 But the battle of the Saturday came down to a pair of battle hardened “standard” 20 year old BMWs. IDC fan favourite Chuck Geary and hero of the weekend William Rose went round for round as each mirrored the judge’s line.

William would eventually progress only to fall foul of Anthony Galvin and his immaculate 2JZ 180sx, handing Galvin the podium and 2015 Semi-Pro Championship to Cork native.

With 5 drivers vying for the championship title, a spanner was thrown in the works. Daigo Saito, one of the best drifters in the world in his own 2JZ powered Chaser shipped across the world for 1 event only. Daigo was out for blood from the offset, having crashed out of competition both times on Irish soil previously. 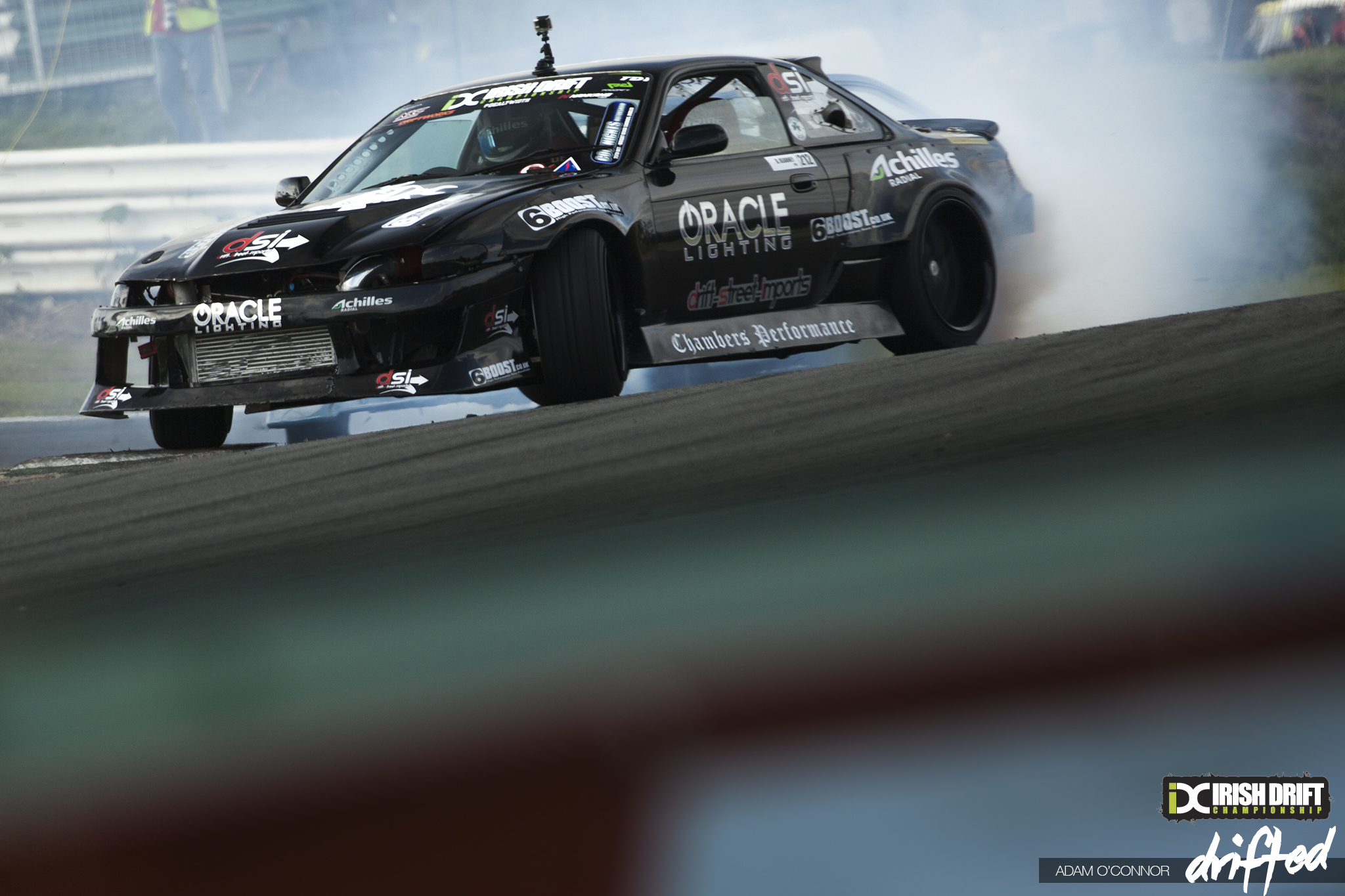 Fresh from Formula D and into controversy, Dean Kearney was set to sit behind the wheel of his Oracle Lighting Dodge Viper SRT10 but due to Canadian customs, the car was set to see the crusher days before the event due to an issue with the chassis number. Fortunately, the Viper lives to drift another day, but only on Canadian soil for the future. Dean would take contol of the immense Drift Street Imports S14.

Driftworks boss Phil Morrison was back in the driving seat of an Orange S14 once again, albeit team mates Chris Smiffys’, as the DW86 required a full engine rebuild after BDC Round 5 the weekend previous.

One of the most anticipated drivers of the weekend was Marc Huxley and his RA28. Unfortunately, running such a unique drift car creates heartbreak in emergencies, as a drive shaft snapped Sunday morning. Unable to source a Mustang drive shaft on short notice on foreign soil, Marc would view the rest of the weekend from the stands.

IDC 2015 would bring the end of Prodrift and Irish Drift Championship legend, Alan Lenihans competitive career. Alan was a driver favourite and would regular meet friends and fans alike around the pits with a beaming smile.

If there is ever a way to end a competitve career, Alan Lenihan knows how to. Any driver paired with Daigo Saito in the Top32 would have the feeling that their weekend has come to a halt, but with a do or die mentality coming from within that NKC helmet, Alan matched Daigo move for move forcing a spin into the gravel from Saito. Queue raptoruos appaulause from all corners of the crowd as Alan continued to drive on in to cloud 9.

2014 Irish Drift Champion Duane McKeever would through no fault of his own, become ruled of championship contention as James Deane and Tomas Kiely’s progression through the bracket meant mathematically, he was unable to accumulate enough points to take the lead.

Coming into the weekend, 16 year old Jack Shanahan had one hand already on the title. But the toll of running two full championship title fights over the course of the year had brought the S14 through hell and back, only to bow out at the last hurdle.

Jack and father John have worked nothing short of magic under minimal time constraints to get Jack on track previously, but the best option this time round was to jump behind the wheel of another car to chase the title. Jack would first pilot the 2JZ S2000 of Marcin Mucha and then into 13 year old Ryan Caldwell’s S13, but unfortunately would exit the competition at the Top 32 to Anthony Galvin. The title race was down to 2.

Back from Drift Allstars duty, Nigel Colfer would steer his way to 3rd place on the podium. The Tri-Ace 180SX has seen tough times over the past 12 months and will certianly spend the next few months freshening up. 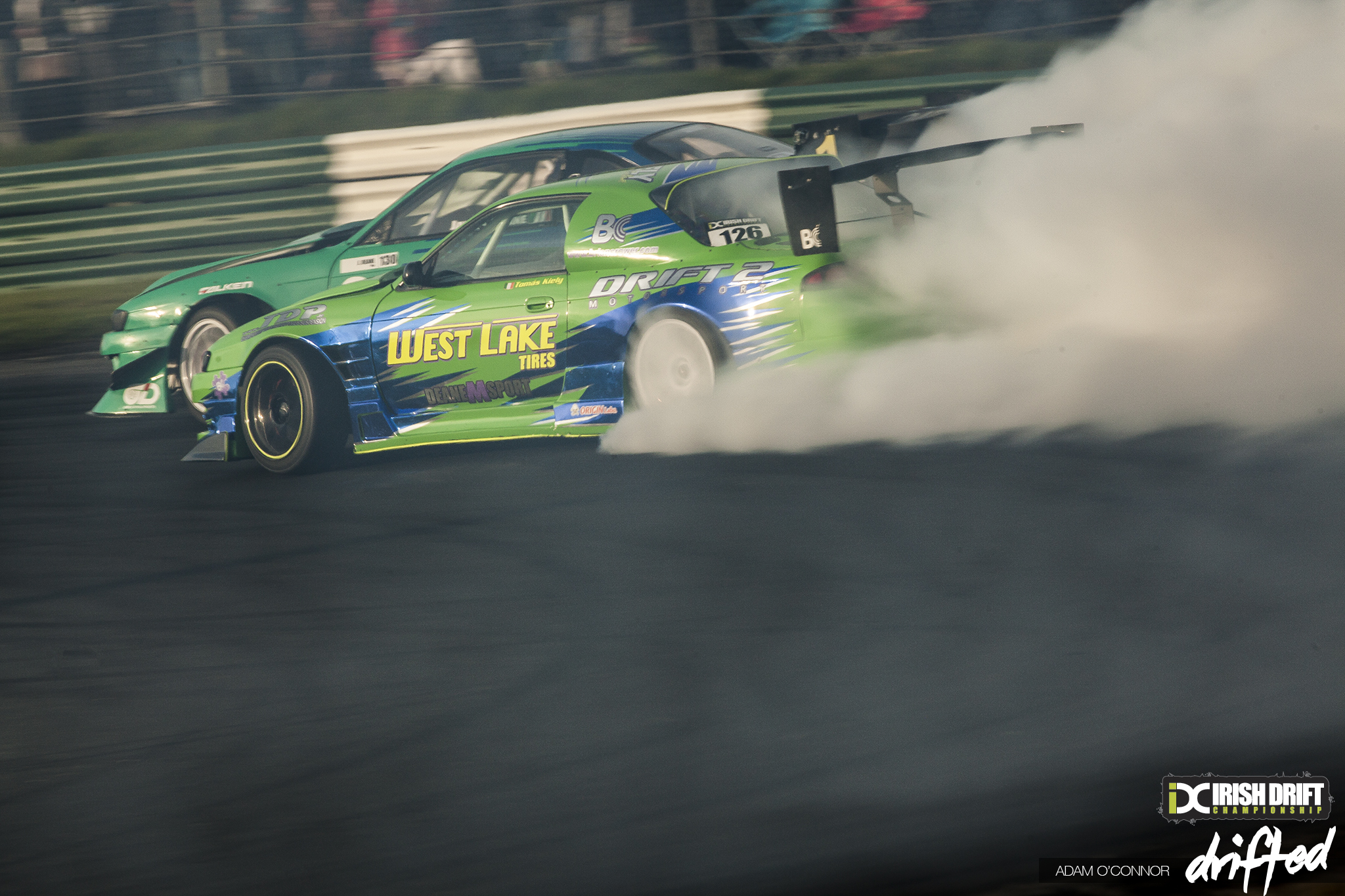 The championship race would come to an end with some of the best battles ever witnessed within Mondello Park. Tomas Kiely would take James Deane to 2 OMT’s with neither the judges, drivers or spectators able to split a marginal advantage to either driver across the 4 battles.

With James in the lead, it was obvious that something was amiss with Tomas’s 2JZ powered S14. Disaster would strike, fire and oil would erupt from the exposed engine bringing an end to what was a valiant effort and campaign from a man still finding his feet within the Irish Drift Championship.

But as the champagne spray lingered in the air, Tomas looked on what could have been, planning and plotting his revenge. The 15 year old was down but simply not out. This is someone carving his way through a championship with 15 short years under his belt. World drifting domination may not be on next year’s portfolio, but I’m sure its earmarked for the future (I’m sure he will have to take down James Deane and Jack Shanahan along the way).

James Deane may have lifted the silverware this time around but the Deane Dominance seems to have two young guns nipping at his heels sooner then he may have planned.

At the curtain call for the 2015 season and as fans rise to applaud IDC head honcho Dave Egan, the smoke has barely cleared the horizon before he had his sights clearly set on 2016. His sleeves are well and truly stuffed with ideas and if the mummerings around the paddock are true, it’s set to be the best season yet.