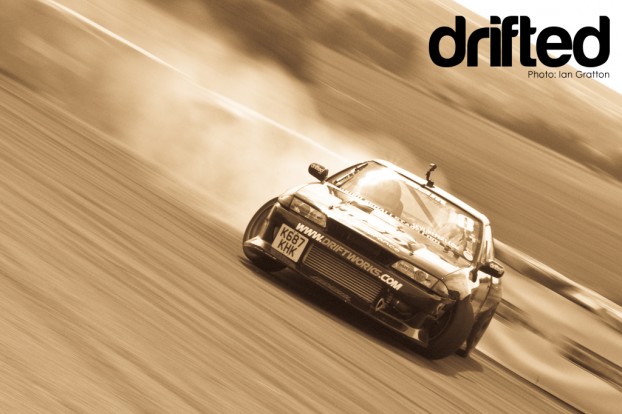 Saturday 26th June saw round 2 of the JDM Allstars championship take place at Donington Park. This round was a real treat for drivers and spectators alike running through a special alpine layout stage whch made use of some of the old circuit that has existed at the venue since it was originally built in the 1930’s. With the stunning weather we appear to have in the UK at the moment it was set to be a great great day.

Living only 15 minutes away from the circuit I arrived nice and early to find myself behind a queue of trailers and transporters. The queue moved along quickly and I parked up and went to sign on and hook up with the rest of the media people and get briefed with regard to safety. Unlike modern traditional circuits the run over the hill and through the trees only has a very shallow guard rails so as you can imagine its fairly obvious there are certain places you really dont want to be stood - safety at these events is absolutely paramount.

The drifted.com team (myself, Will and Jord) headed over to the outside edge of the first corner at the start of the stage for practice and qualifying. This corner was totally blind and immediately swings left as soon as the drivers hit the crest. From our vantage point in the trees we couldn’t see the cars either and our only warning to get ready was savage induction noise and huge bangs from exhausts as the drivers accellerated hard up the hill. 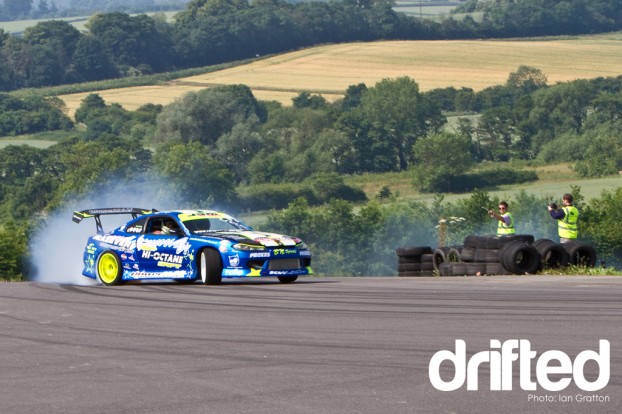 First car over the crest was Alan McCord in his V8 powered S15 Silvia. The noise this thing makes is incredible and with the serious amount of power on tap Alan had no problems smoking out the entire forest section right up to the long 180 degree bend in full view of the crowd.

After a short while here we headed back up into the forest to catch the cars as they make their first transition in the run through the trees down towards the main spectating corner. This was by far one of the most exposed vantage points I’ve ever taken photographs of cars from. 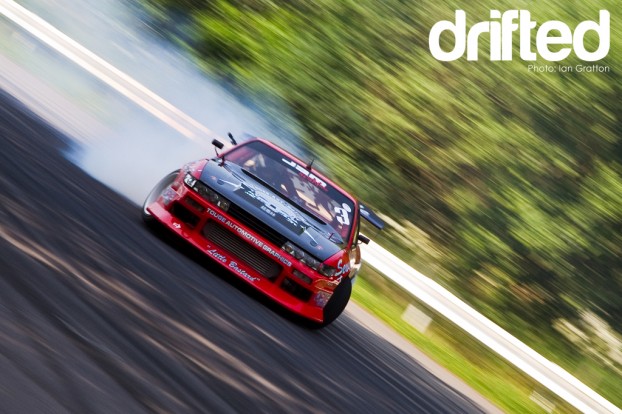 Luke Fink is making quite a name for himself here in the UK and was really going for it this weekend. From the LowBrain Drifters preview video for the event Mr Fink obviously feels right at home on this track. More about Luke later on.

After clutch issues at the last event Phil Morrison and the Driftworks S15 Silvia were back on form. Phil managed to keep us on our toes by leaving tyre rubber on the track just feet away from our vantage point in the trees.

The lure of the Alpine stage was enough to encourage two drivers to make the journey from Poland to compete.

Marciej Bochenek in the R33 Skyline had serious speed and style from the off. 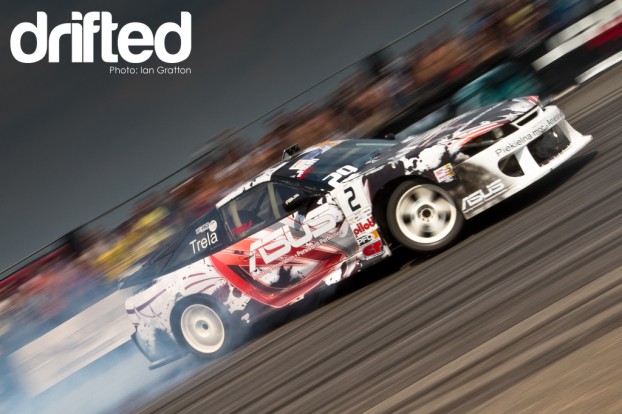 Marciej’s fellow countryman Pawel Trela in a heavily spaceframed S13 was also pleasing the crowd with huge angles and entry speeds initiatiing very early and running the entire length of the wall down into the spectator conrner.

Team Driftworks Dan Chapman was looking good from the very start. After just missing out on the Semi Finals at the Manchester event he was no doubt eager to make his mark at Donington. Watching Dan through qualifying he showed great skill and determination and it was pretty obvious he wanted to bag some silverware at this round of the championship.

Dwaine McKeever in the white RB26 powered S13 was fast and consistent right up to the point where he lost out in top 16 battles to Robin Neeson and his Toyota Chaser. It really is hard to believe that Dwaine is only 14 years old as he conducts himself in a way that would put most adults to shame. I would say he is one to watch out for in the future but he is doing exactly what he needs to right now. I think when the time comes to get his driving licence the examiner is in for a bit of a shock.

Jon Calvert’s stunning red S13 had also looked really strong in the practice runs. The car is obviously incredibly well built and goes like stink - more importantly Jon knows how to get the most from it. Each practice run got progressively wilder and faster and it was looking really likely that Jon would be heading towards another high position in this round.

At this point I’d moved down to the main spectator corner - the entry speeds looked seriously fast from the other end of the track but I wanted to see for myself. I readied myself to get some shots knowing Jon would be the next car through the stage. Jon entered my view finder so quickly I couldn’t possibly track him - he had obviously come into the corner way too hot and this wasn’t going to end well. Moments later there was a huge crash as Jon piled into the concrete barriers side on moving it a fair distance along with the tyre wall behind it. This was not looking at all good. Jon got out of the car a little shaken but he was generally ok. The car was not going to be running again as the damage to the near side was significant moving the front suspension turret amongst other things.   This was no gaffa tape and zip tie repair so that was Jon’s day over.

The bigger cars such as Robin Neeson’s Toyota Chaser seemed extremely well suited to the course but Marciej Bochenek took victory in their quarter final run. Credit to the two Polish drivers for pushing a lot respected drivers out of the final 16.

As the cars were returning back through the course Robin decided he was going to put on a smoke show for the crowd - I don’t imagine for one moment the smoke show he gave is quite what he had planned. Robin did a gentle 180 degree turn on the handbrake to start a nice smokey slow donut and fire suddenly shot out from under the car followed by lots more smoke venting out through the bonnet. Everyone in high vis immediately called FIRE and the excellent JDM safety crew rushed in to sort things out. From where I was standing I’d imagine it was an issue with one of the oil lines that cools the turbo or maybe an oil leak from elsewhere. 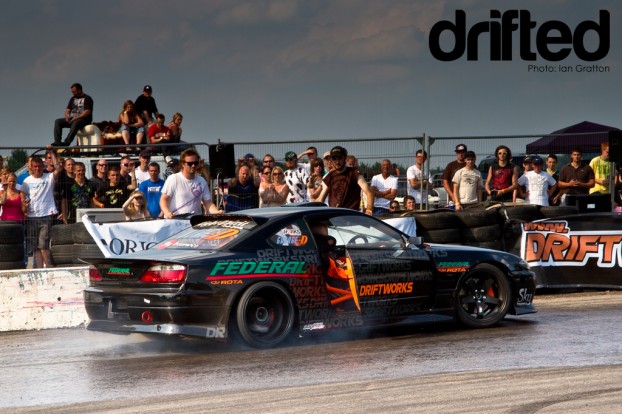 With the spectator corner getting a good soaking from the fire tender the judges decided it was only fair to attempt to dry out the ground.  The last thing the drivers needed right now as a sudden change in grip level – if the entire circuit was wet that would be a different matter.  Even with the blazing sun it wasn’t going to happen quickly so the judges employed the services of Phil Morrison’s 2JZ powered S15 to help speed up the process. 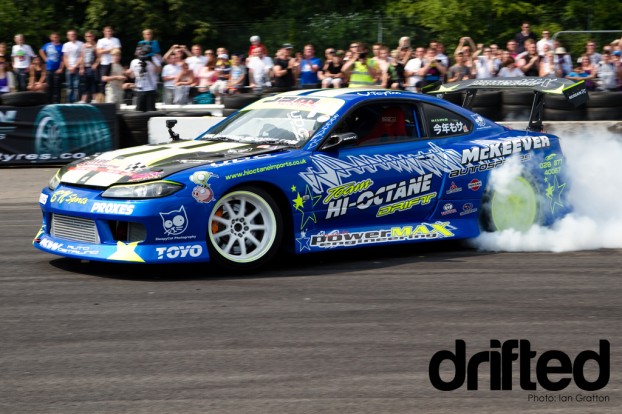 Alan McCord did his bit too. 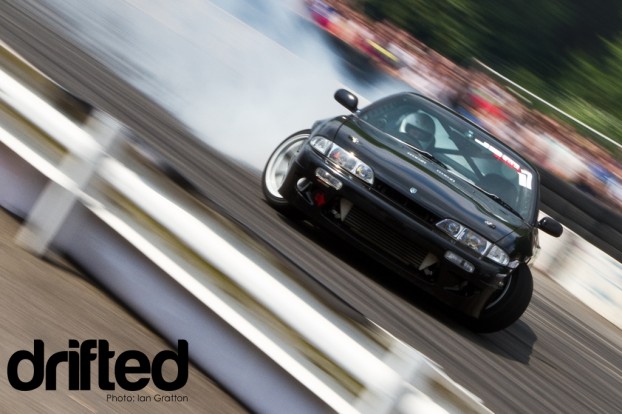 It was also really nice to see Mitto out in his subtle and cleanly styled s14. Matt’s entries into the main spectator corner out of the forest section were early carrying lots of speed.  Having not seen Matt drive for what seems like forever we were most impressed.

Mitto was ready to attempt an over 90 degrees angle entry to win some extra points with the judges. Drawing Phil Morrison in the final 16 wasn’t exactly the easiest route into the final eight. Mitto came in nice and fast and sure enough the angle was huge. Unfortunately the car didn’t quite get back to a more manageable angle and matt crunched into the wall. The car was perfectly drivable afterwards and nothing that cant be fixed. 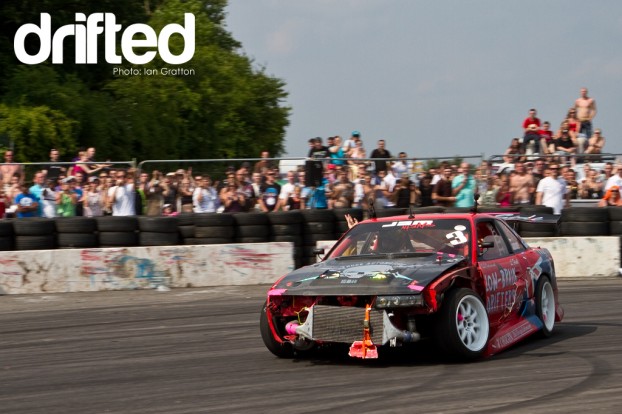 The twin battles from the final 16 through to the deciding final were amazing.  Its a destructive journey through the rounds at a course such as this and going hard all day the Servenside Imports ‘Little Bastard’ had taken a good smack to its face.

Bonbon was abscent from the final 4 having a very close battle with Luke.  He didn’t catch fire or explode so he will be back to do battle in the future.

So that left us with an all Team Driftworks final.  There are no team orders involved here – a battle is a battle and the best driver on the day wins.  It was an amazing thing to behond from up high in the breeze – I wonder what the people coming into land at East Midlands Airport make of it all ?

Another bit of silverware for Phil. 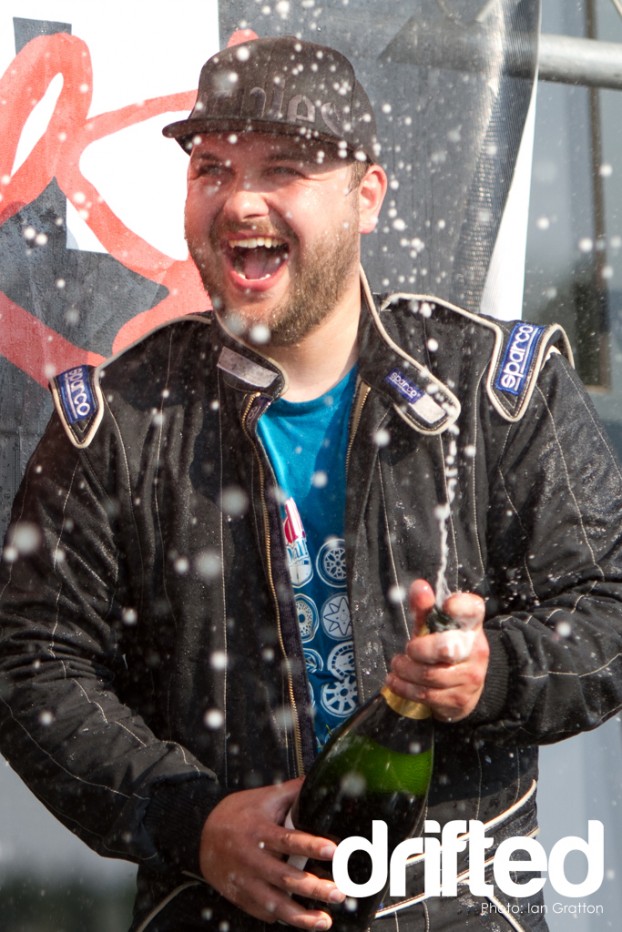 And obviously well done to Dan Chapman for a win at such a unique venue and proving that a car retaining its original engine can do the job well.

After the podium and soakings the event wound down.  It had been a truely amazing day and I hope the alpine section gets another visit from the JDM crew soon.  So far this year I’ve been able to watch both rounds of the JDM Allstars championship and they have been stunning.  Go experience one for yourself!

Also a mention to Donington Park for allowing this event to take place.  The circuit has had a bumpy ride of recent and its nice to see you recognising the sport.