After attending the annual Lousada drift event for the past few years you think I’d be prepared for the mental and physical onslaught that is shooting it. Don’t get me wrong, I love drifting but after 18 hours solid of it, followed by four to five hours sleep I was less than ‘chipper’ when the alarm sounded for day two of the event. Come 9:00am I was back at the track, batteries full, memory cards empty, enthusiasm slightly less than brimming….but at least I had coffee. 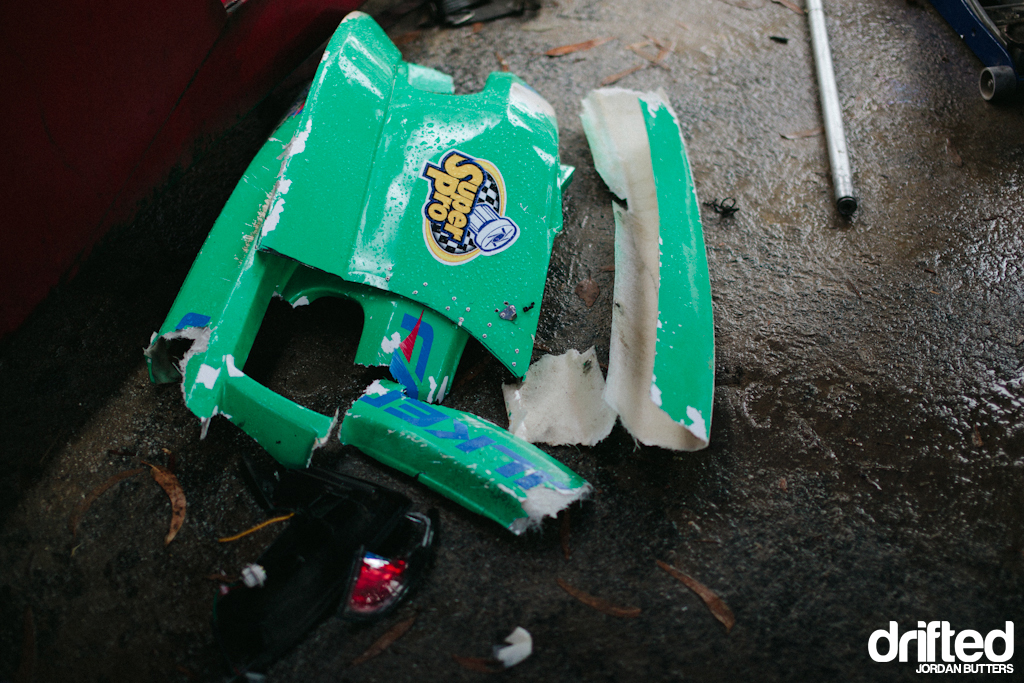 Evidence of the previous day’s abuse was abundant. Pieces of fibreglass body panels and shard of tail-lamps strew the floor in the paddock. 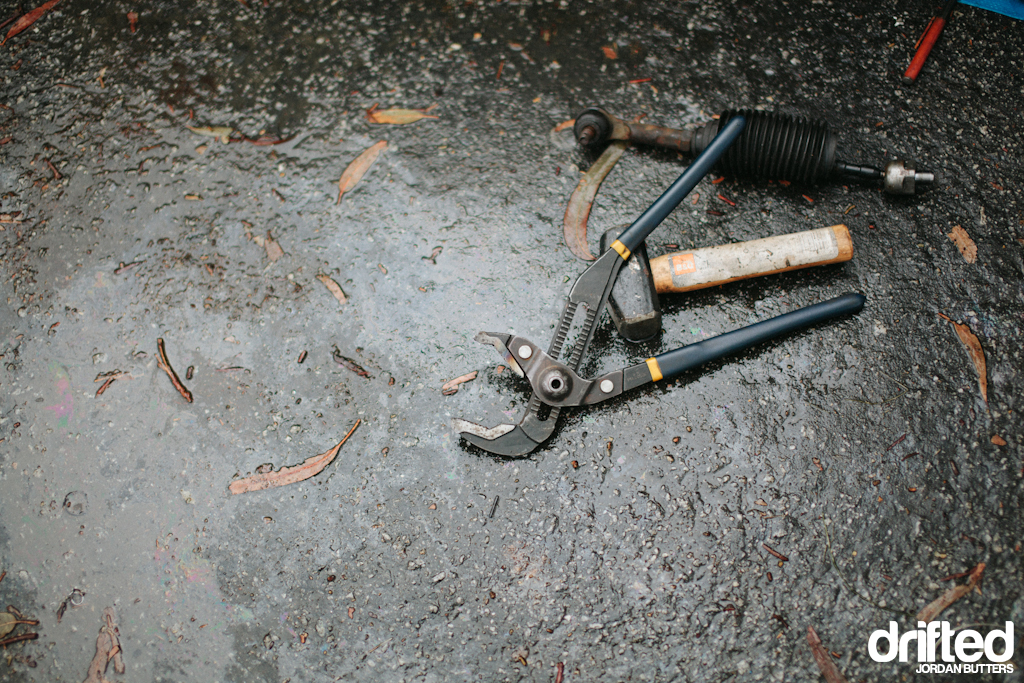 The clang of delicate adjustment tools rang out, accompanied by a selection of swear words in a variety of languages. 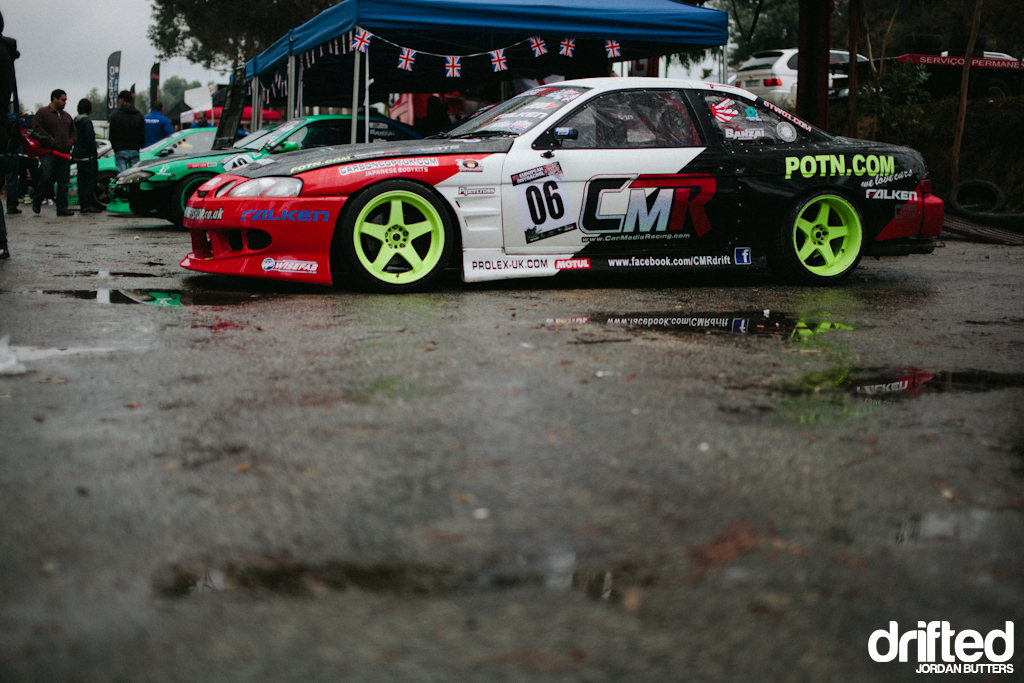 You’ll also notice that we woke to very un-Portuguese weather. Someone up ‘there’ wanted the British drivers to have the upper hand - we’re used to drifting in the rain remember.

Ricky Emery had somehow managed to bash, knock and shape the back end of his car back into resembling a Soarer again. I’d be interested to see the shape of it all under those overfenders as I’m guessing they’re hiding a multitude of wall impacts!

The Falken guys were up at ready to rock nice and early, keen to lay down some runs under wet conditions, just in case it didn’t dry out before competition time. 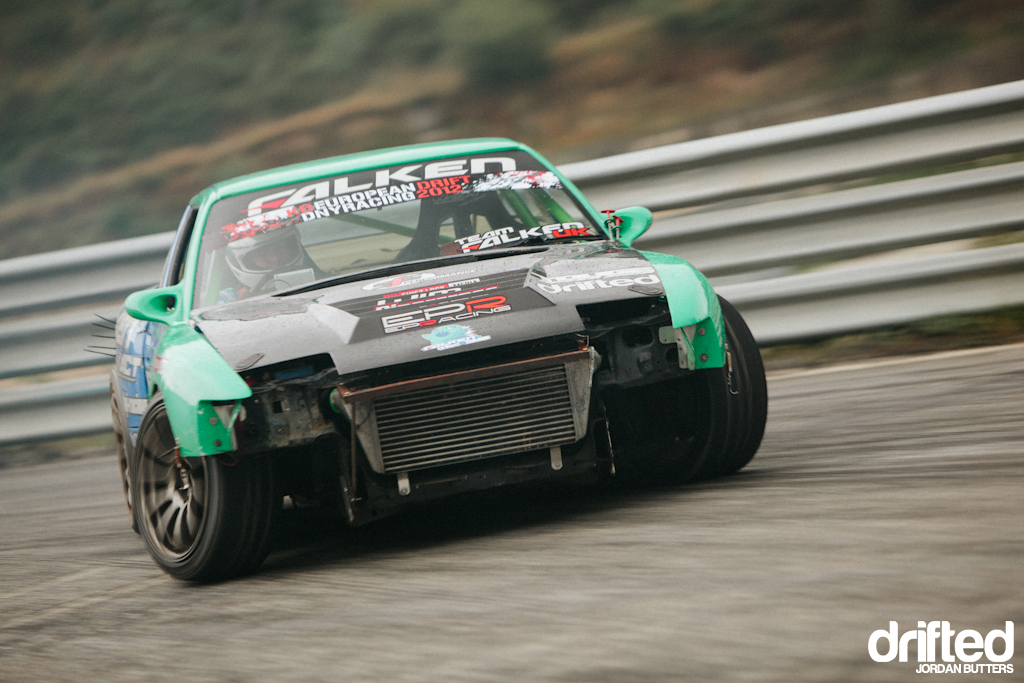 And that’s exactly what they did as soon as open practice began. Alan Green dropped a borrowed near-stock SR20 into his 180sx for the weekend as he awaits delivery of a rather special Mazworx-built race-spec SR20DET. 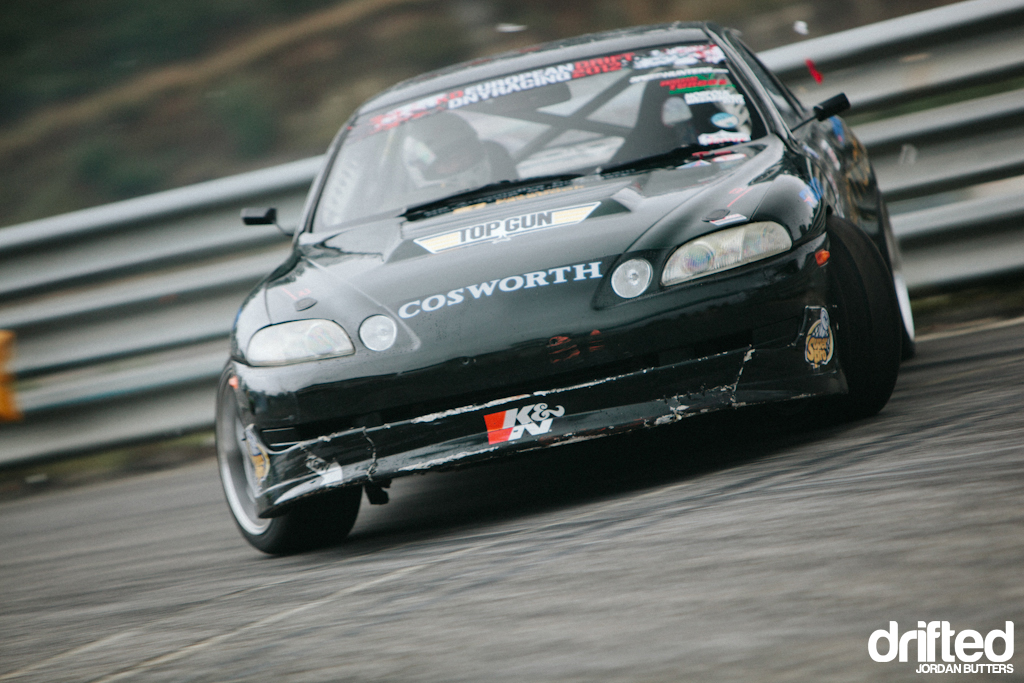 Ricky hit the track too and got straight back to work. Yes, that is fragments of his rear lights that you can see going their separate ways. 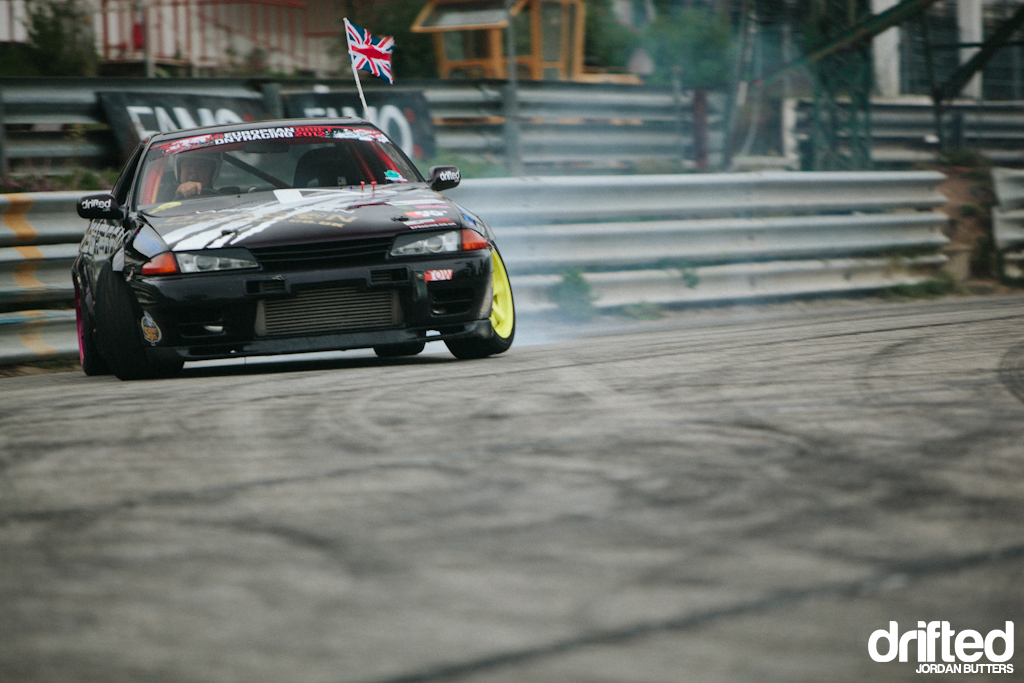 Before long the track started to dry out - the speeds increased and the smoke made a welcome return!

A group of lads actually DROVE all the way to Lousada from the UK in their drift cars, ‘sampling’ the delights of the European roads on the way. Robert Smith, above, wasn’t planning to enter the competition but was talked into it by his mates.

Running the walls at Lousada must be un-nerving knowing that you have to drive the 1,300-odd-miles home in your car too! 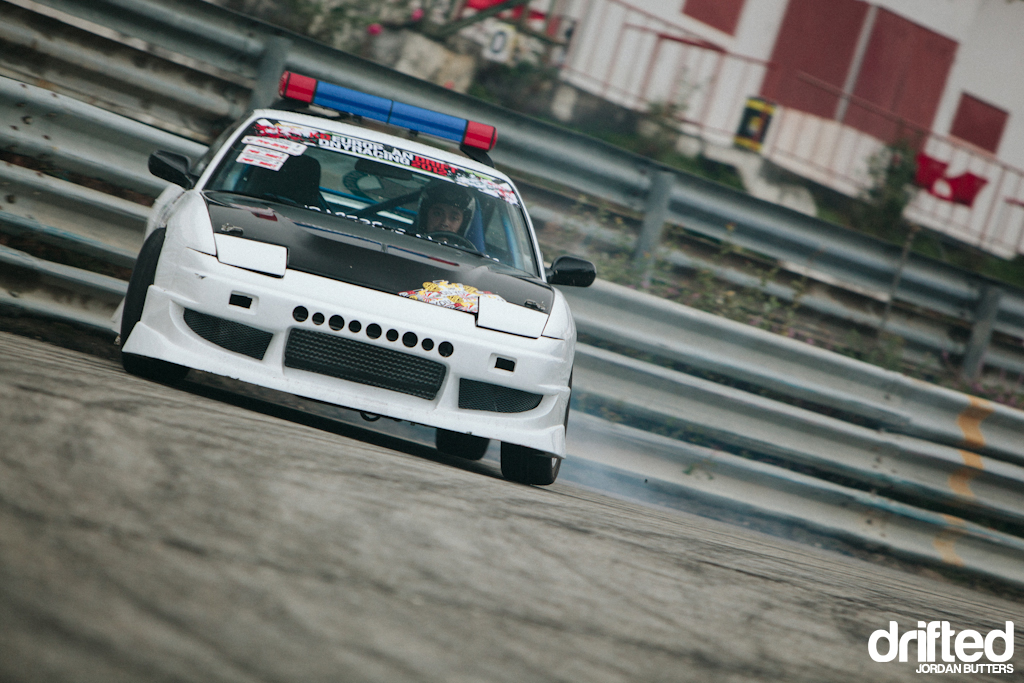 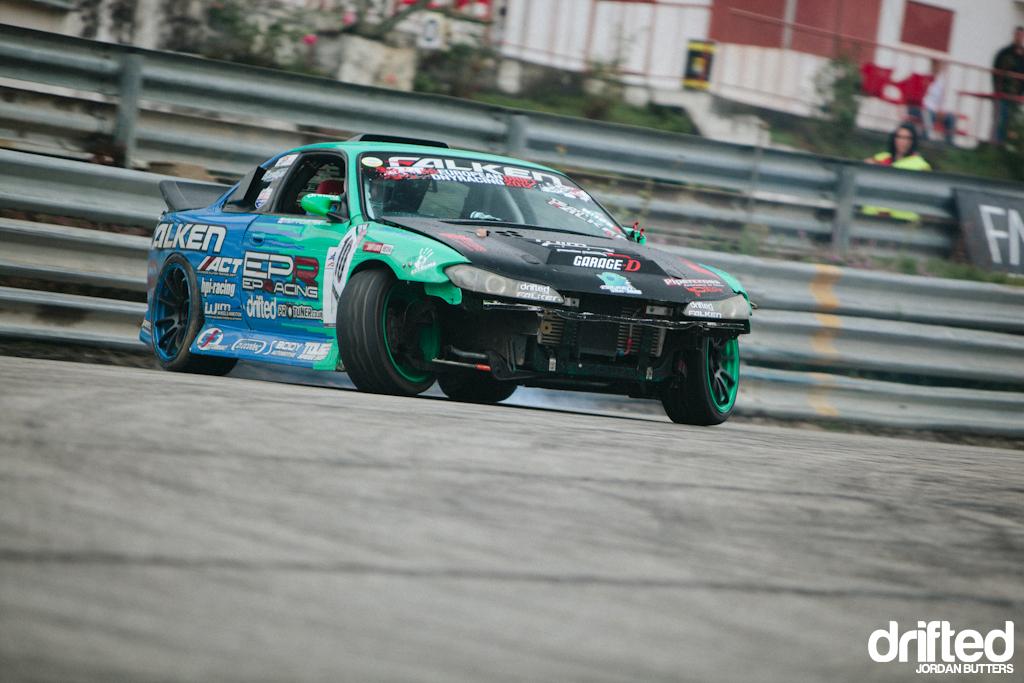 Naturally, everyone was doing their best to abide by the law…

Declan Munnely’s Mk2 Escort picked up some light panel damage from a coming together with Falken’s Matt Carter early in practice. Rubbin’s racing.

Before long the heavens opened and just as the surface was drying out and drivers were adapting, the dynamics of the track changed yet again.

That is, for those that made it out on track - Danni’s Murphy’s S14a lay docile in the pits with an engine fault.

By the time qualification rolled around the ground had dried up again, last minute adjustments were made to tyre pressures.

And the drivers made their way from the paddock (across a public road!) to the track entrance. In Lousada no-one really bats an eye when they see these cars driving on the road, drivers can often be found at the petrol station up the road refueling their competition cars throughout the weekend.

For one weekend only hooning is a way of life in this small Portugese municipality.

The drivers line up in front of one of the cross-over tunnels around the track, the first corner blind, but the eager crowd fully in their sight… 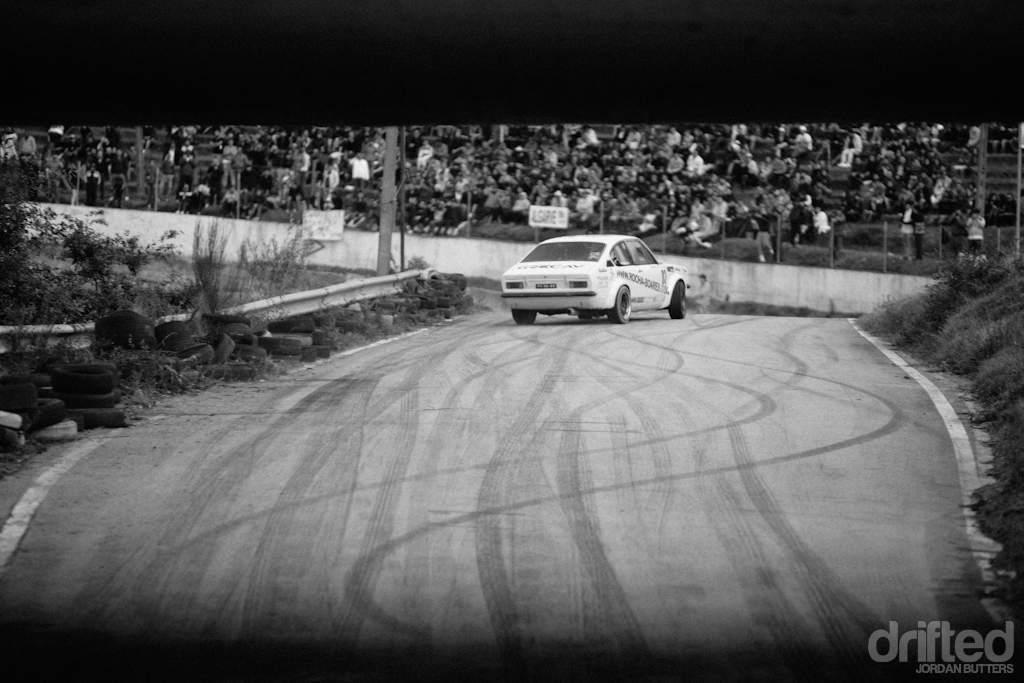 Before firing down the straight, over the crest and into the sweeping down-hill first bend. 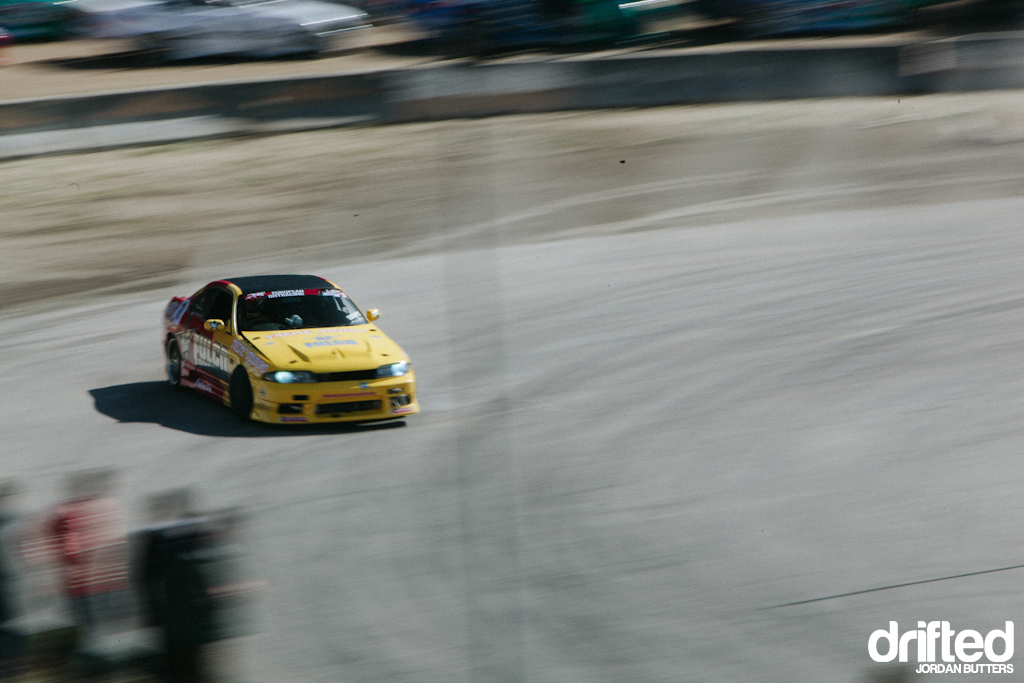 The downhill slope tends to catch the odd driver out. Raphael Fulco’s R33 really is in-fact heading for that wall at the speed it looks like it is here! Luckily he was unscathed, but his car repaired some quick repair work.

Each year Lousada gets more and more popular with photographers, with the numbers seemingly doubling from the year before. This was the first time I’d ever spotted a leprechaun photographing a drift event though. 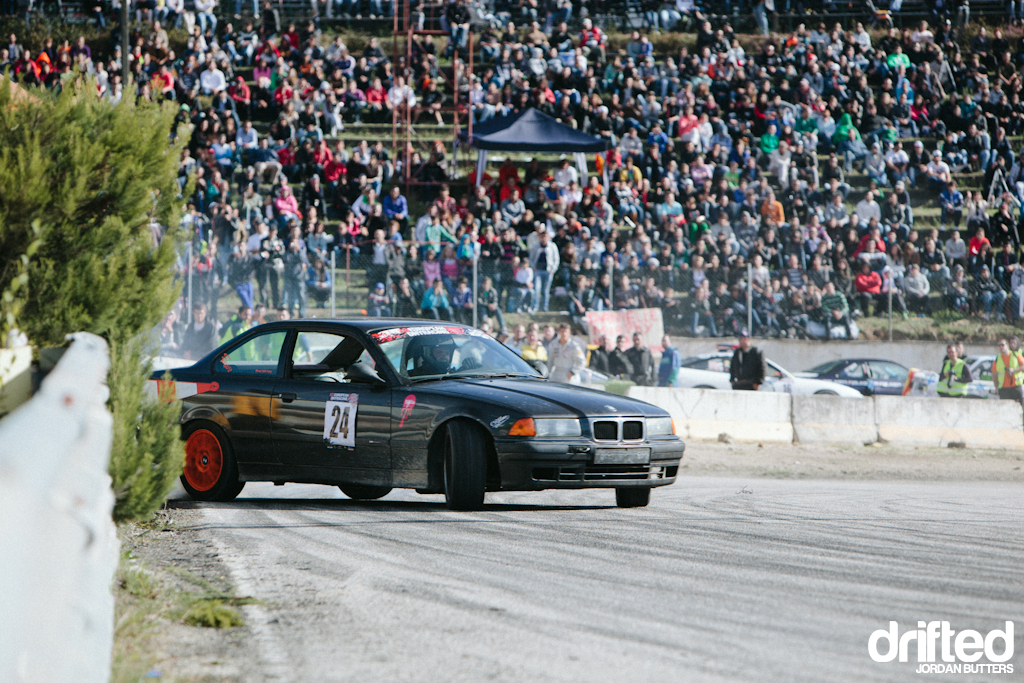 The main event at Lousada always pulls a large and passionate crowd. Being used to the timid and always polite UK crowds it’s a breath of fresh air to actually hear and feel the crowd’s presence at an event. 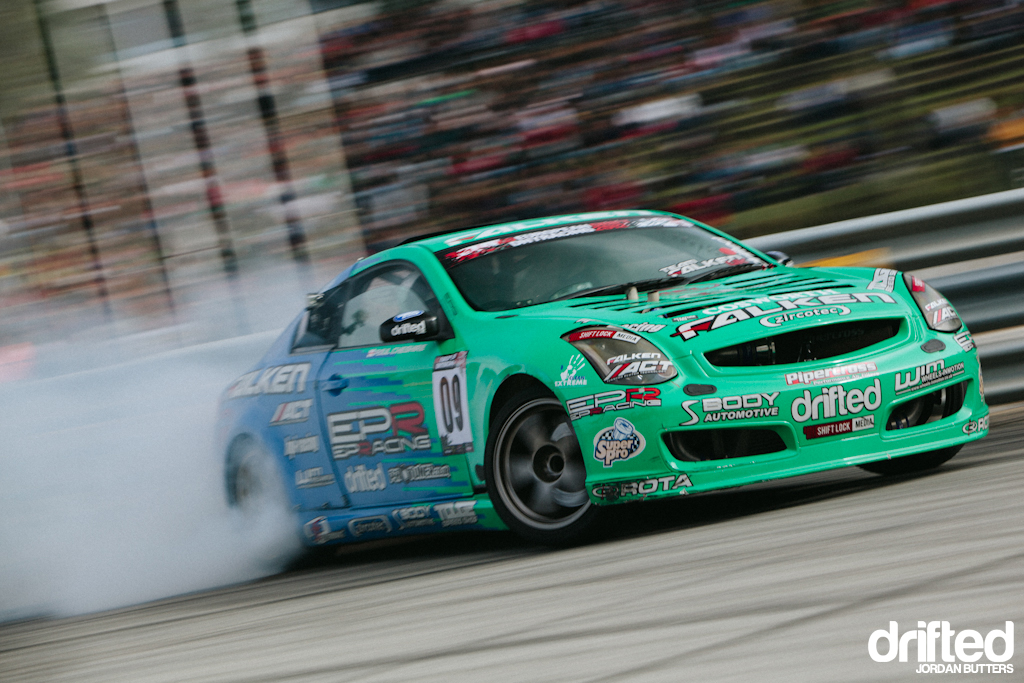 Crowd-favourites get huge cheers, ‘bad’ calls from the judges get jeered and boo’d. 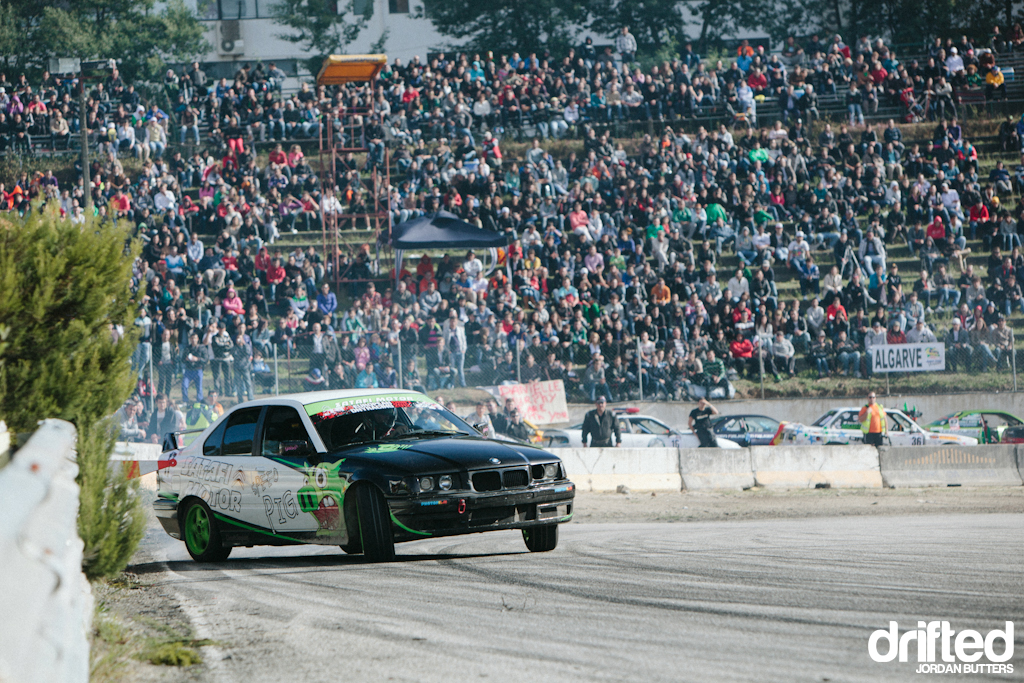 It really adds to the atmosphere and I’d sure it spurs the drivers on to go harder. 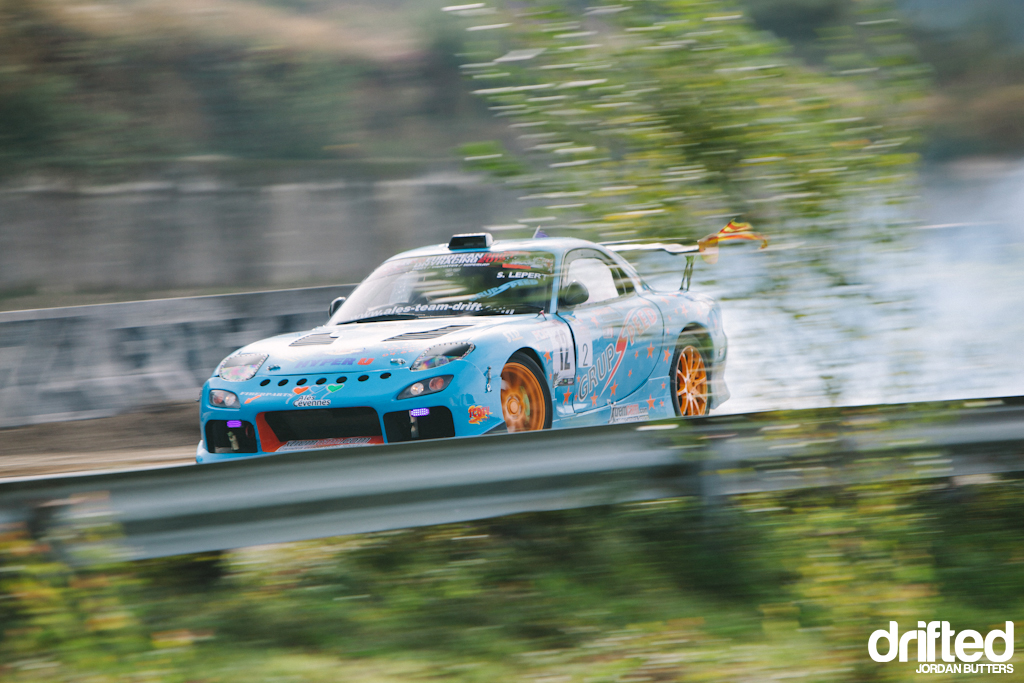 I don’t envy the judge’s job this year, everyone was so on point it must have been tough putting together some kind of running order for the battles. 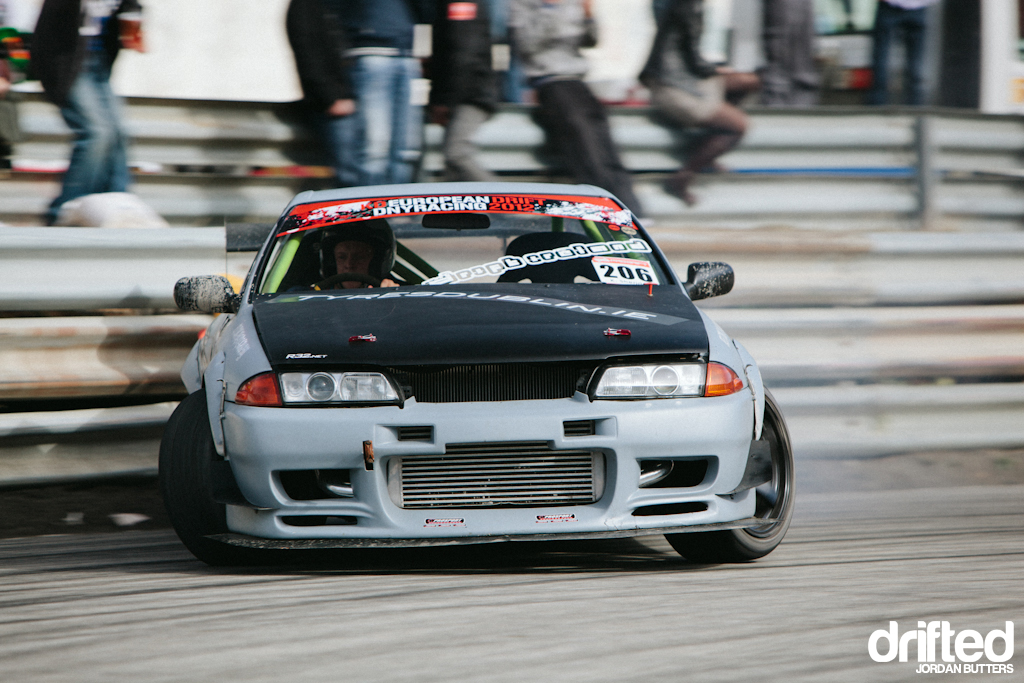 Qualifying quickly separated the wheat from the chaff… 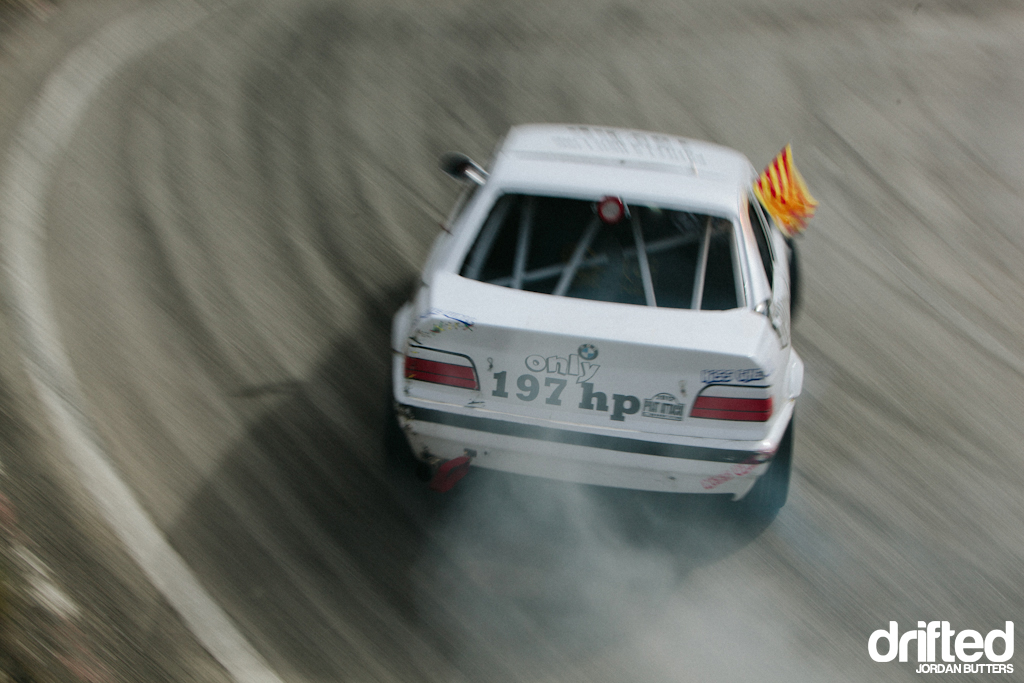 …and the judges and crowd alike were ready for the battles. 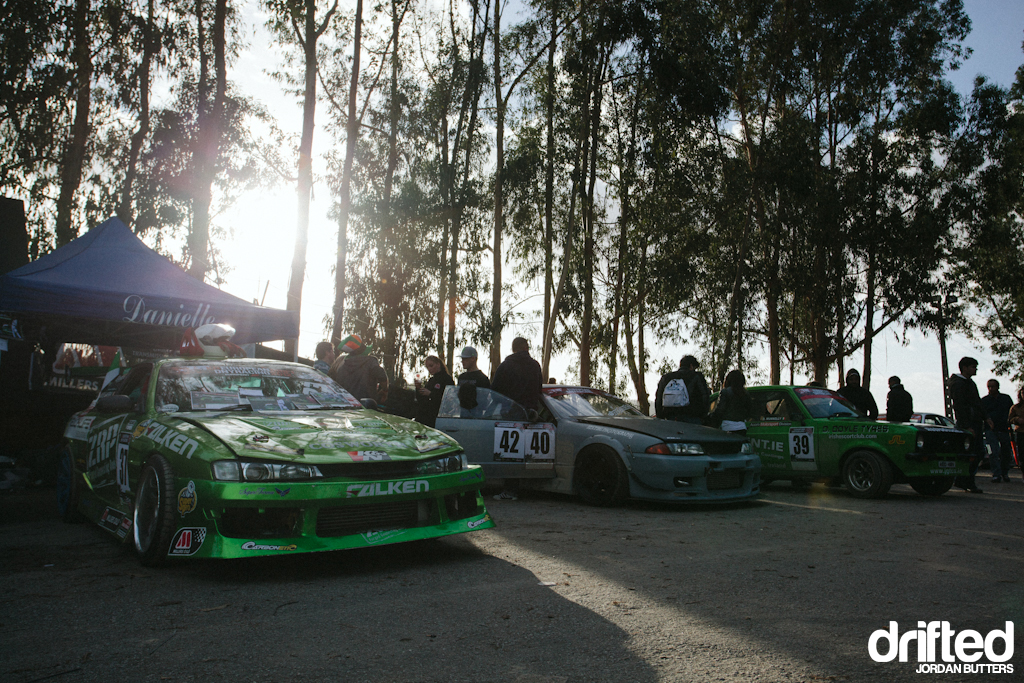 Naturally, another break was called for first. 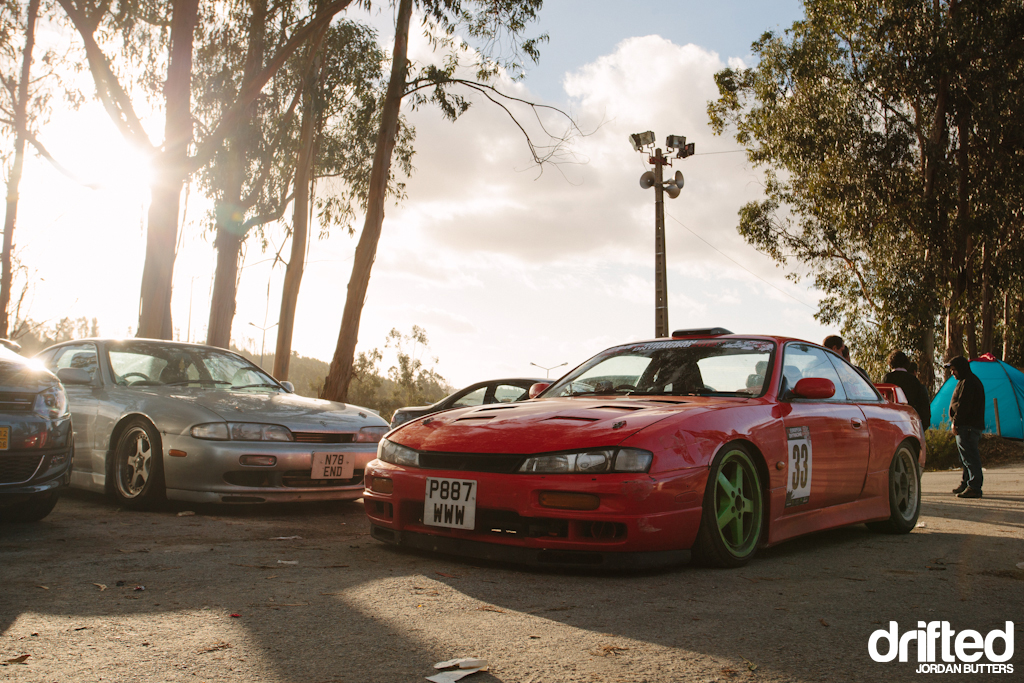 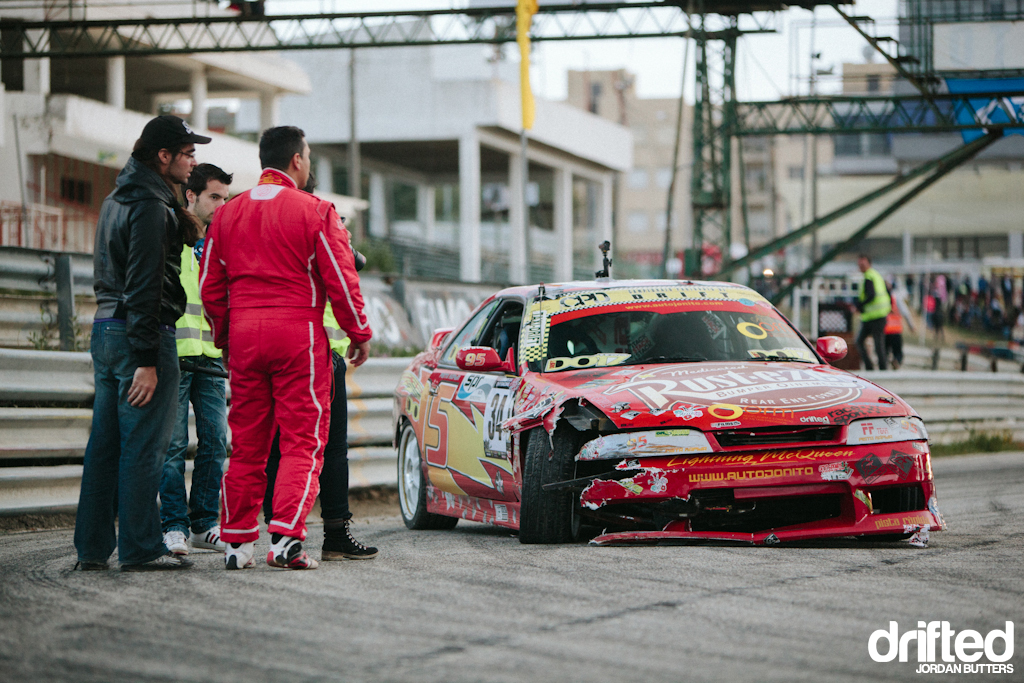 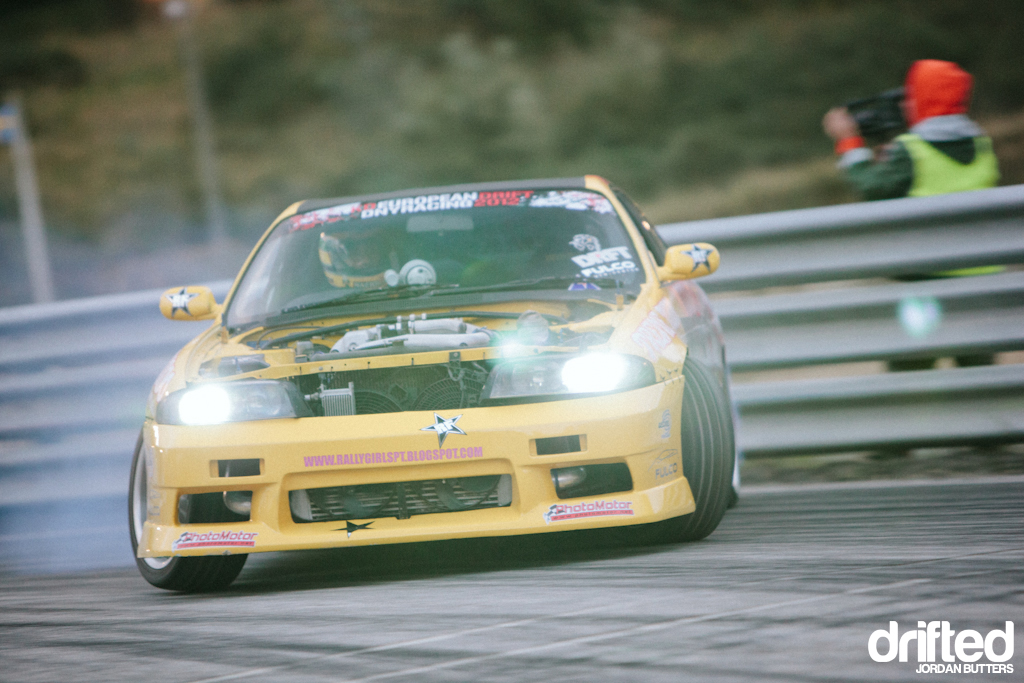 But Raphael Fulco managed to fix his car in time to get back out and take the number one spot in the Am class. 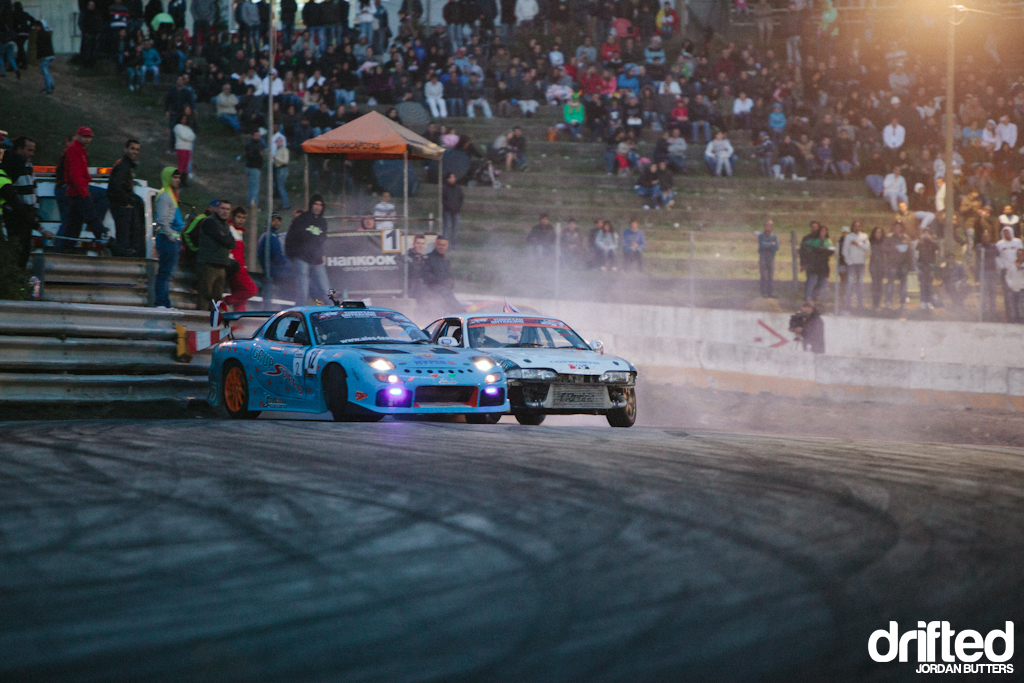 As the light dropped the pro battles started to heat up. 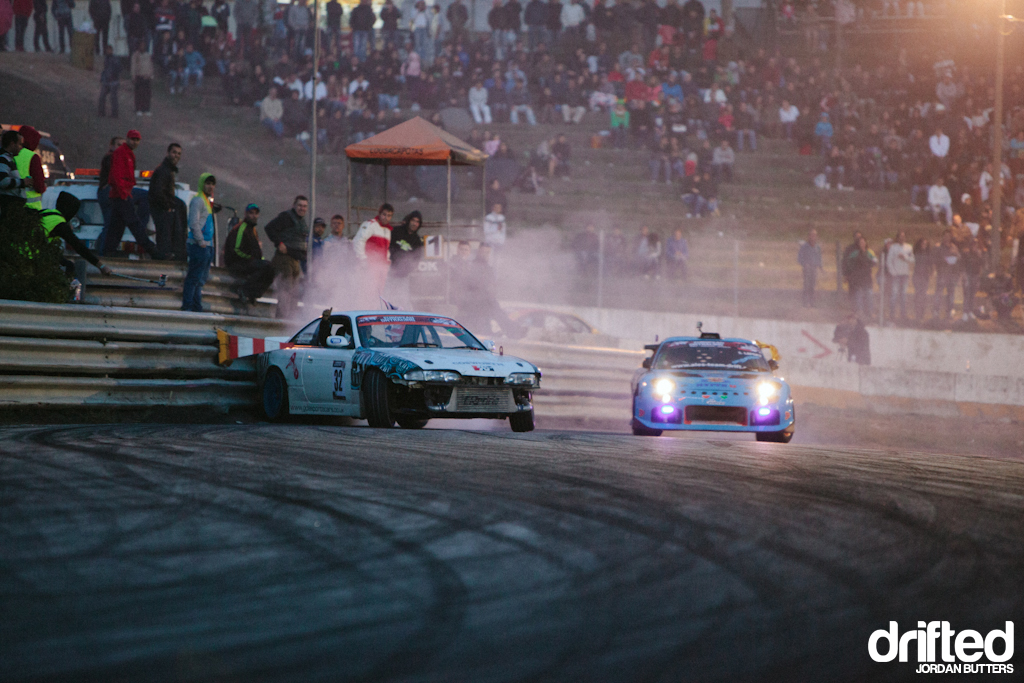 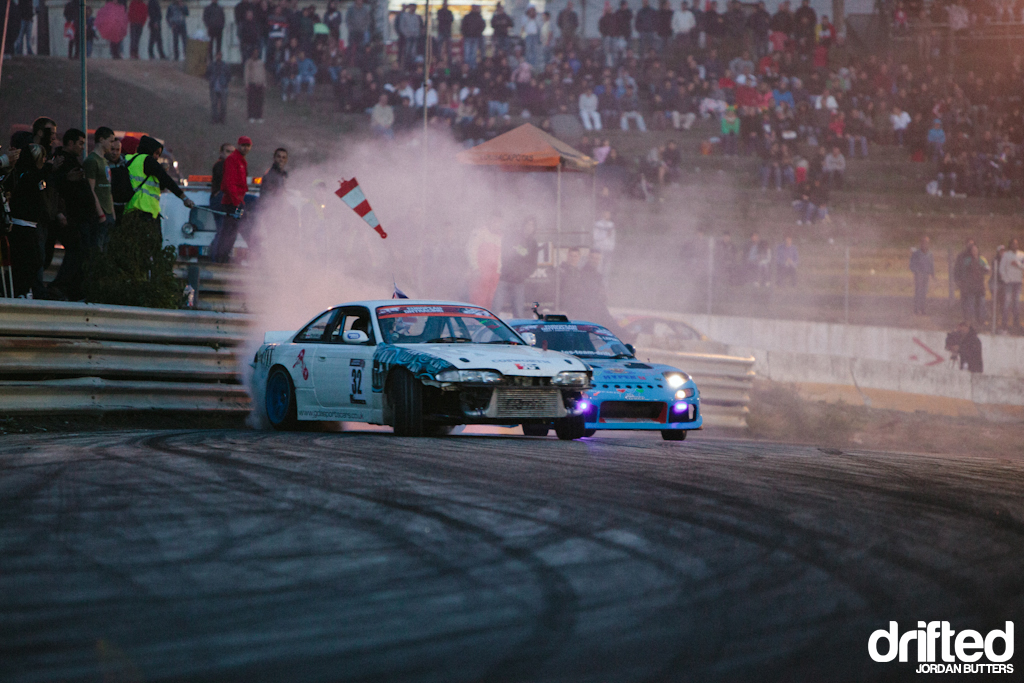 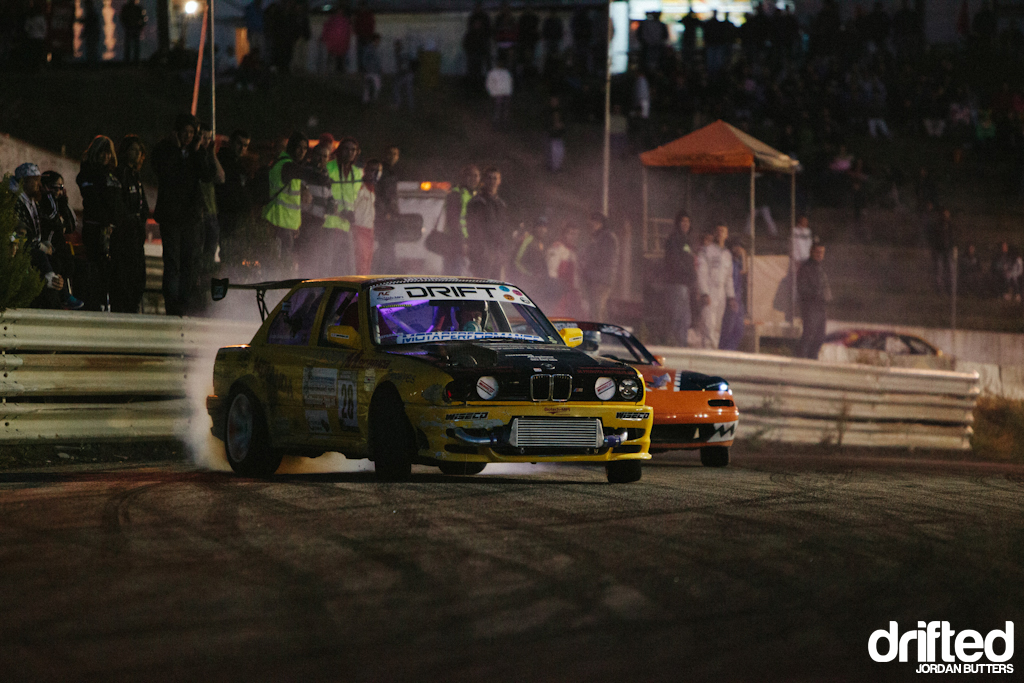 Joao Gonçalves in his yellow E30 lost out to the Mazda 787B-inspired livery of David Sanchez Moreno’s MX-5. 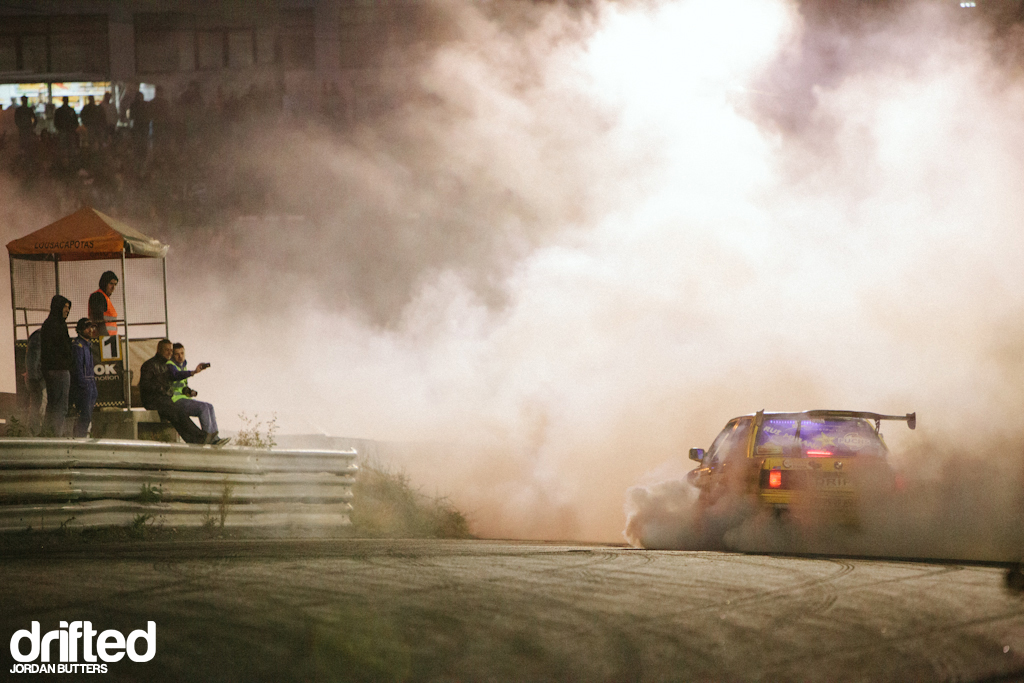 Every defeat was followed by the obligatory huge smokey burnout for the crowd. Going out in style.

Followed by a burnout… 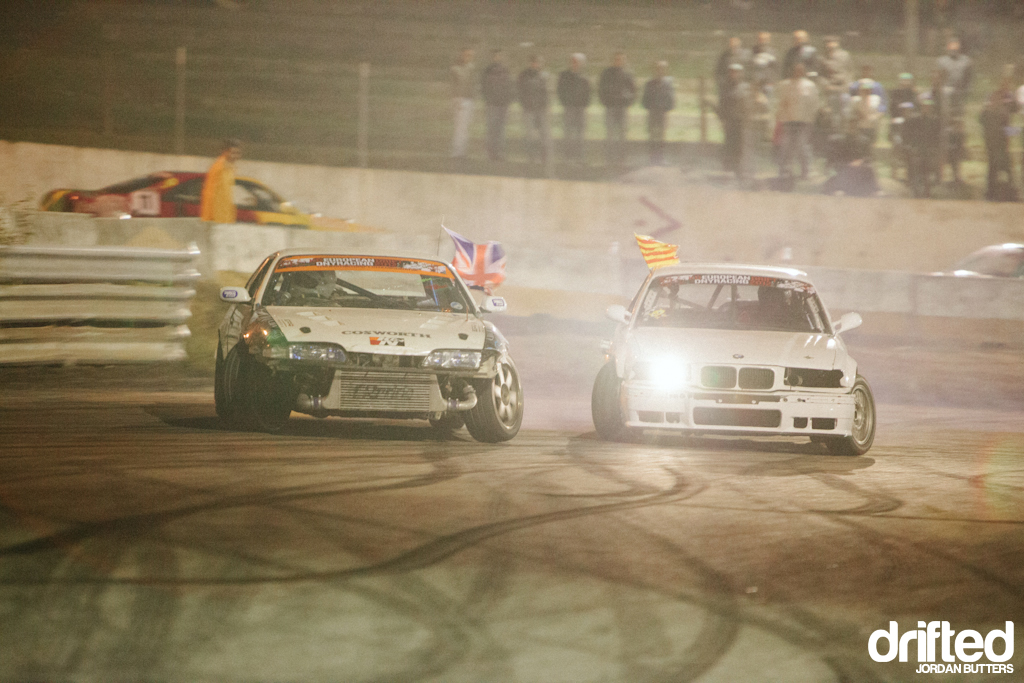 James Fuller in the S14 took out Rafael Paulet Aragones in the white E36. 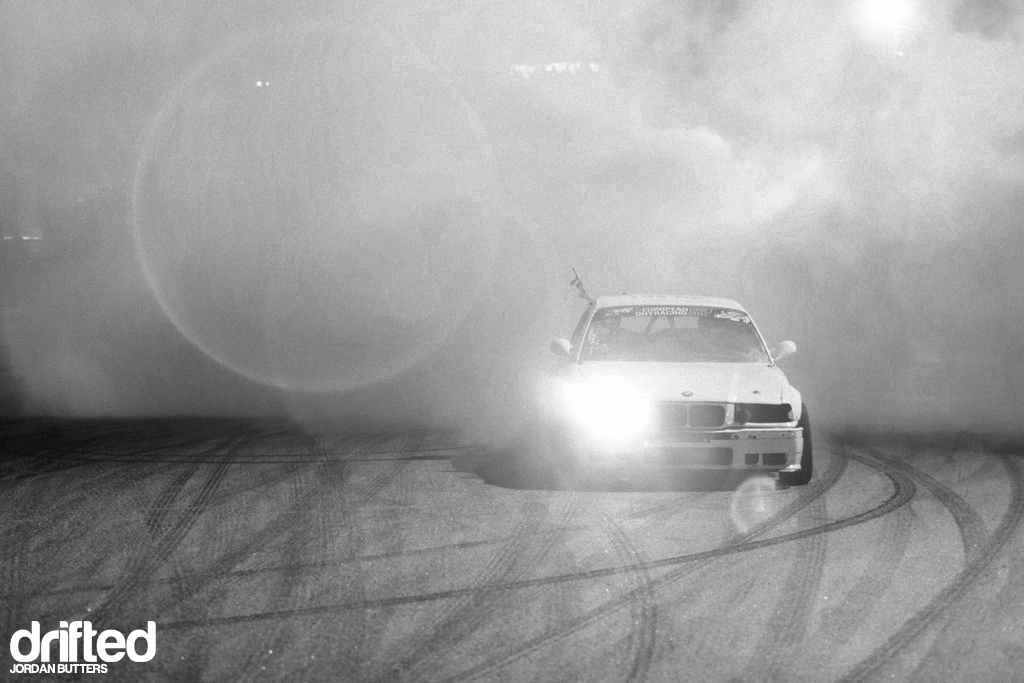 Followed by…you get the point.

Paul Cheshire in his G35 made light work of Danni Murphy in a battle of the sexes. 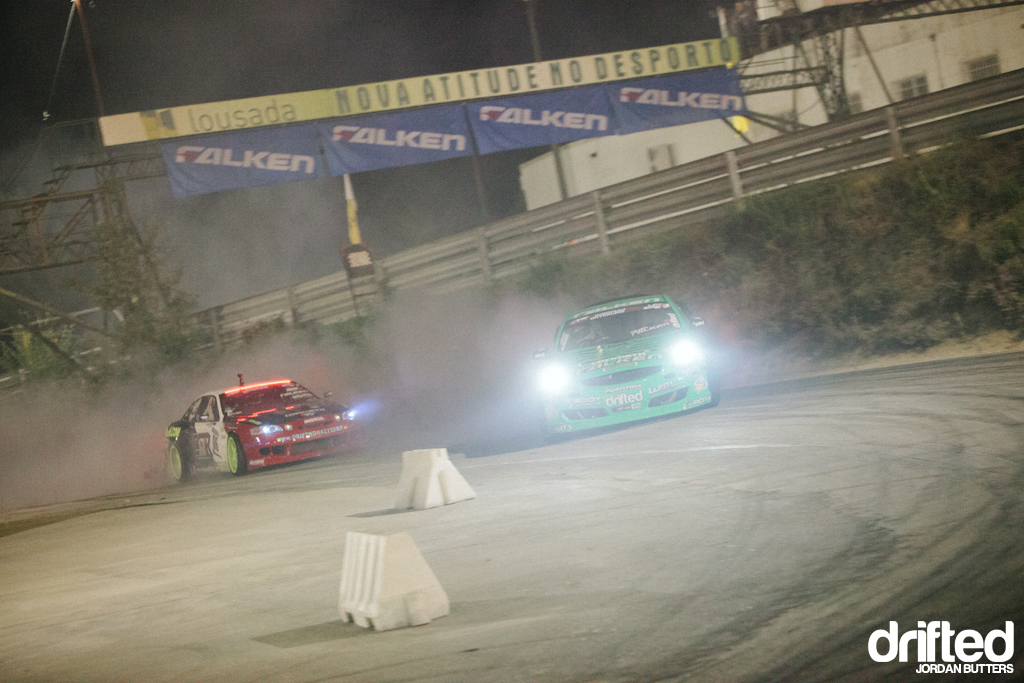 Before losing out to Wayne Keeber’s Soarer. Notice Wayne’s Formula D-inspired front brake light? It’s not mandatory in any series in the UK yet but Wayne fitted it to actively take a step towards showing people that he didn’t brake-check during twinning. 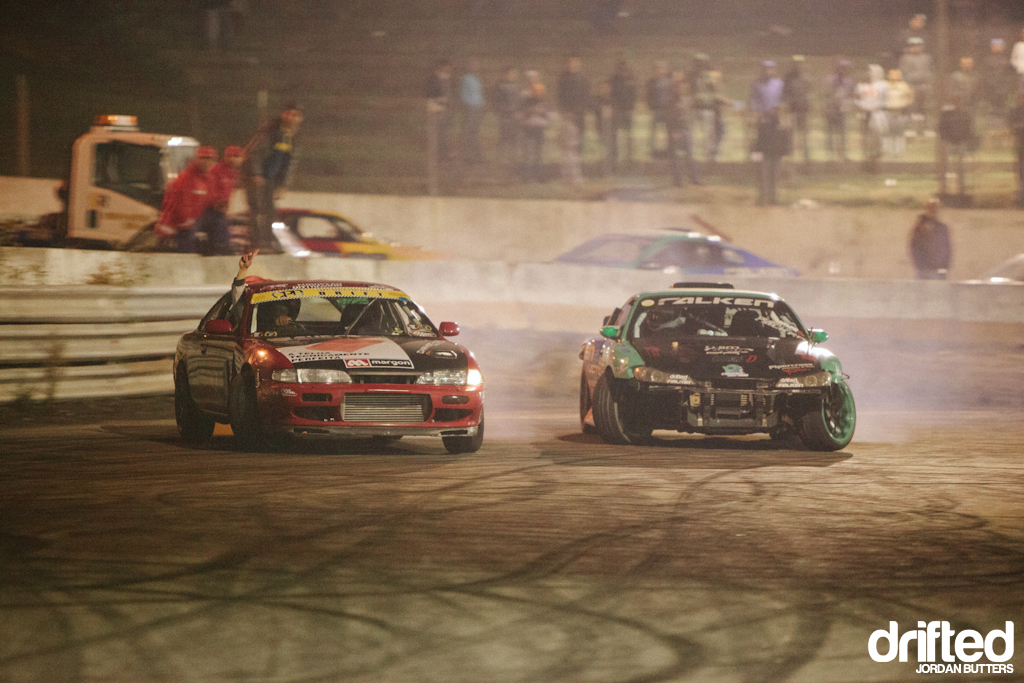 Jose Lopes and Matt Carter had an epic battle in the Semi Finals with some proper door-on-door action. Jose took the win after Matt made contact during a transtition.

And Lluis Lopez and Nelson Rocha battled it out for the other spot in the Finals.

Rocha and Carter did the dance for the bottom podium step and Carter took the spot.

It was a Lopes/Lopez final and as the cars rounded the first bend they were trading paint. 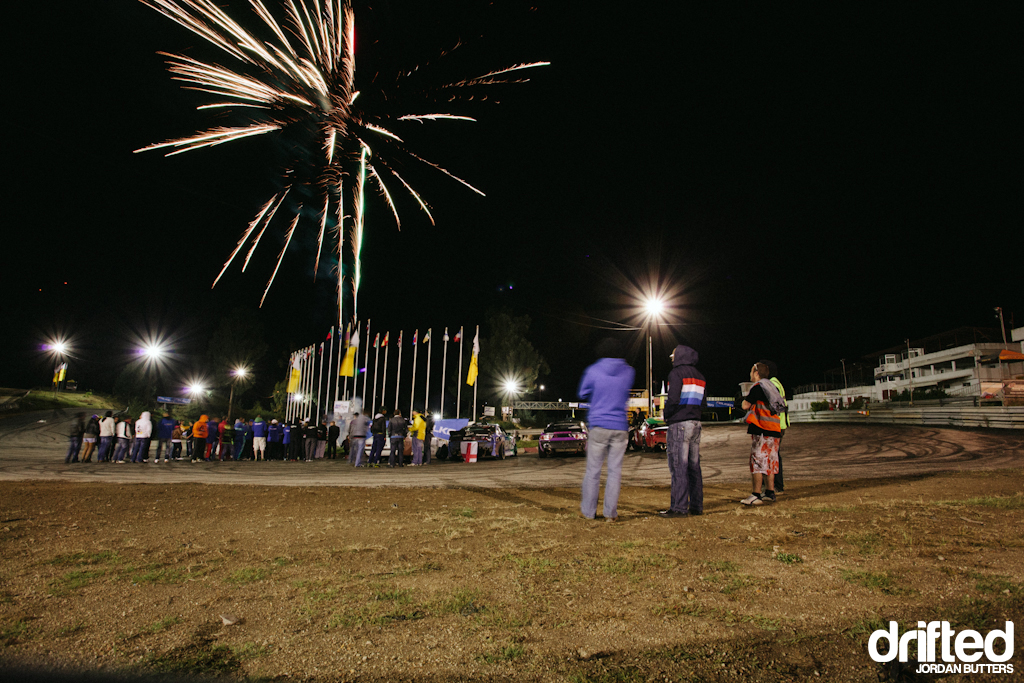 Lousada 2012 is in the bag. It’s been an assault on the senses as ever, with a noticeable shift in driving skill, if a down turn in numbers. Fingers crossed the Portuguese drift scene picks up in the next 12 months so we can return and do it all again.