It’s easy to become jaded when you get accustomed to something. As a photographer who has been covering drifting for the past three years (and as a championship judge and driver for the five or six years before that) I’ve been to a lot of drift events. 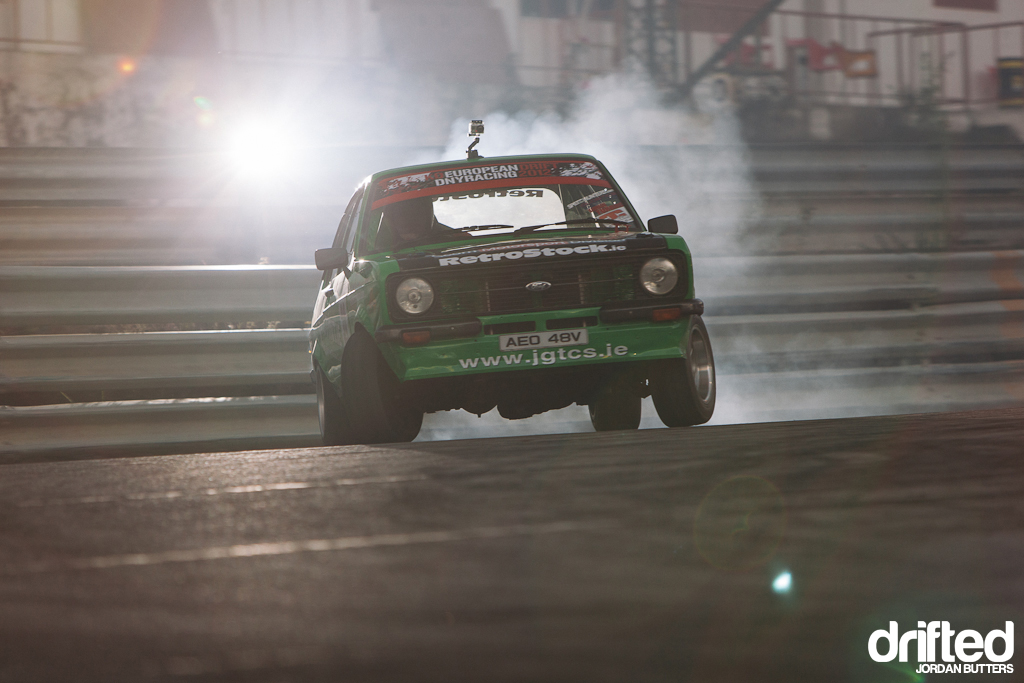 I’ve seen every run from start to finish at each of these events and enjoyed vantage points that your average spectator could only dream of. I’ve stood at the start line as thousands of horsepower has screeched away just centimetres from my ears, onwards towards the first turn and that do or die moment of initiation.

I’ve been peppered with gravel, covered in shards of spent tyre and probably inhaled enough smoke to shorten my time on this planet somewhat. In terms of immersion photographers at drift events get about as close as you can without being a part of the action.

But you still get jaded. You see it all, the closest runs, the biggest crashes, the most nail-biting and tense moments of the year and, ultimately, the more you experience it, the less exciting it becomes. 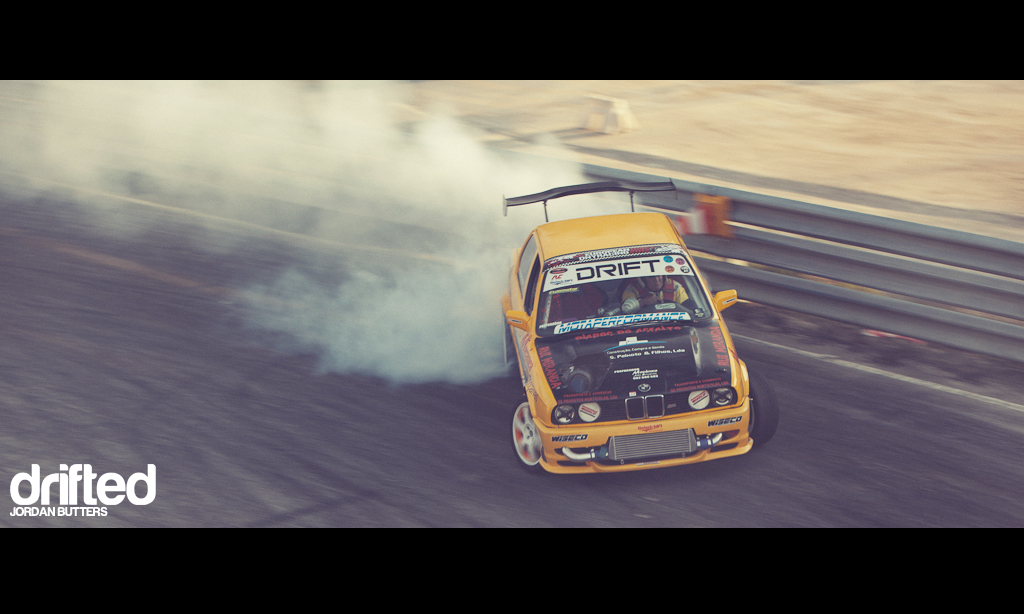 You keep attending events, shoot from new angles, and trying new things to keep it fresh.

But every so often you get a great opportunity handed to you, something that rejuvinates the excitment. 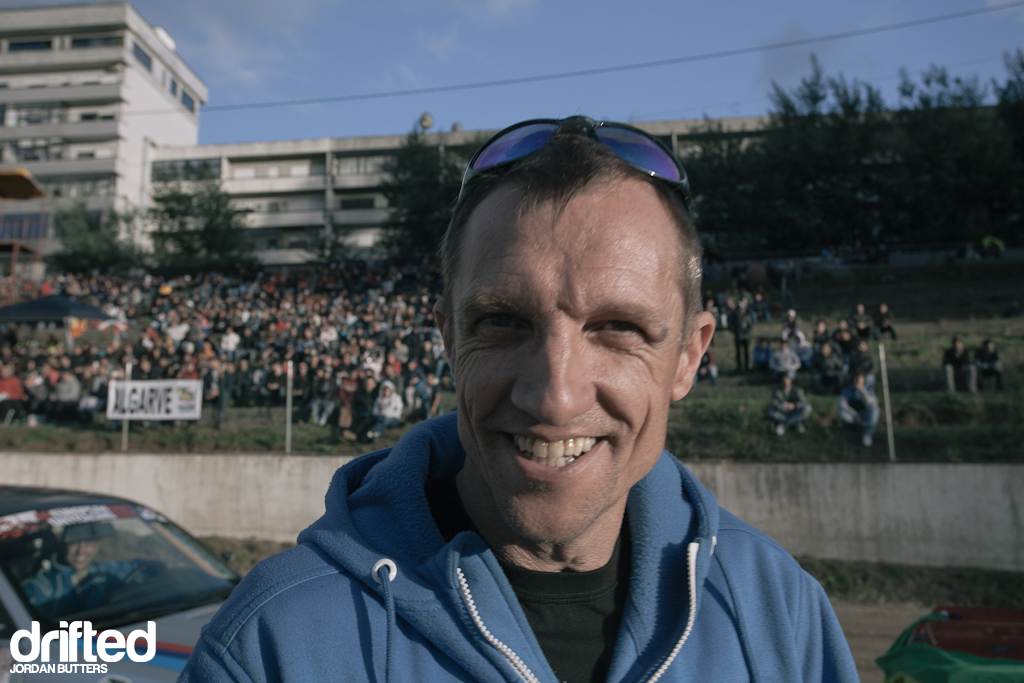 This opportunity came in the form of British Drift Championship front-man and good friend Mark Buckle asking me if I’d fancy making the return journey to Lousada in Portugal of the annual KD European Drift Dnyracing event. 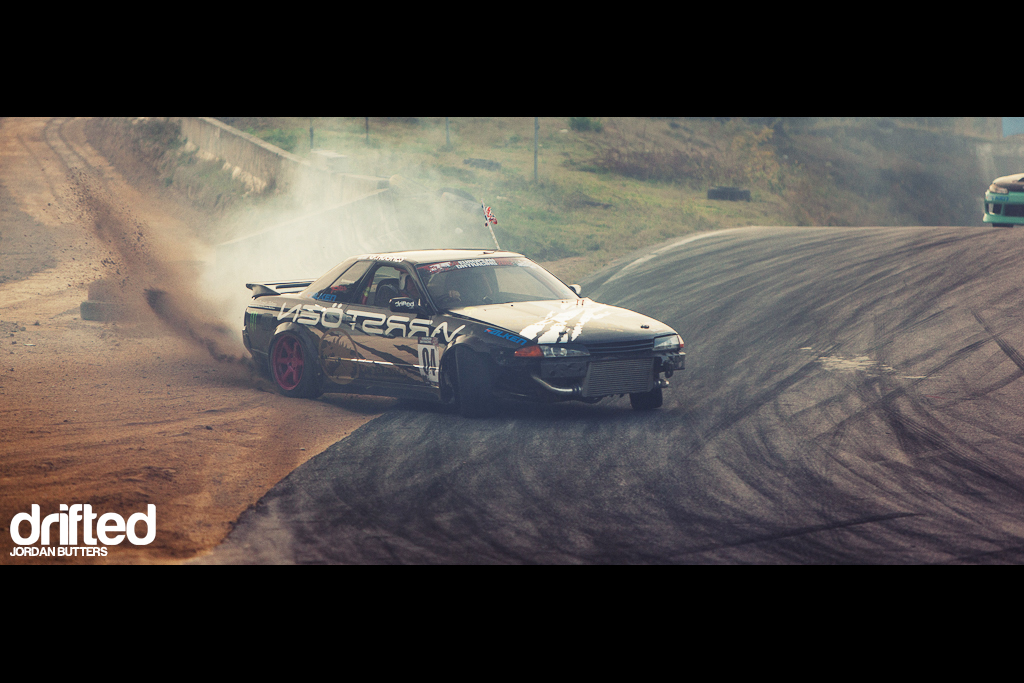 I’d attended the event for the previous two years and it sat, without a doubt, as one of my favourite events in the calendar. I couldn’t say no. 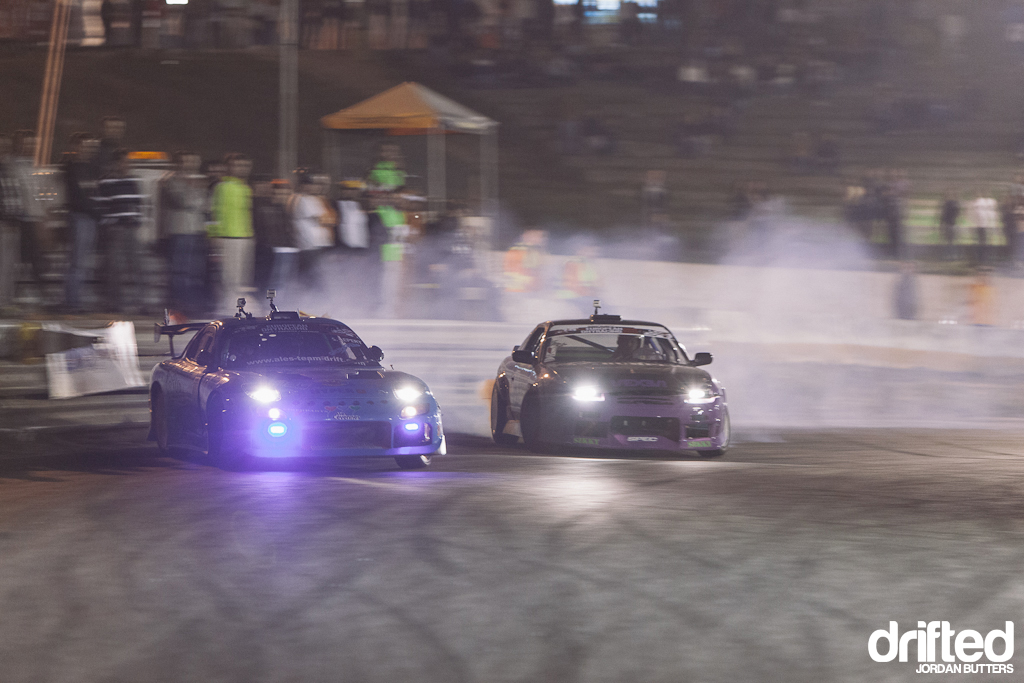 Lousada has an energy to it. But at the same time it’s one of the most unsuspecting venues that you can imagine to hold a drift event.

A small municipality, around 40 minutes drive from Porto in northern Portugal, Lousada has a population of just under 50,000 people. The majority of which spend the year going about their business without a care in the world for what goes on in the niche world of drifting. 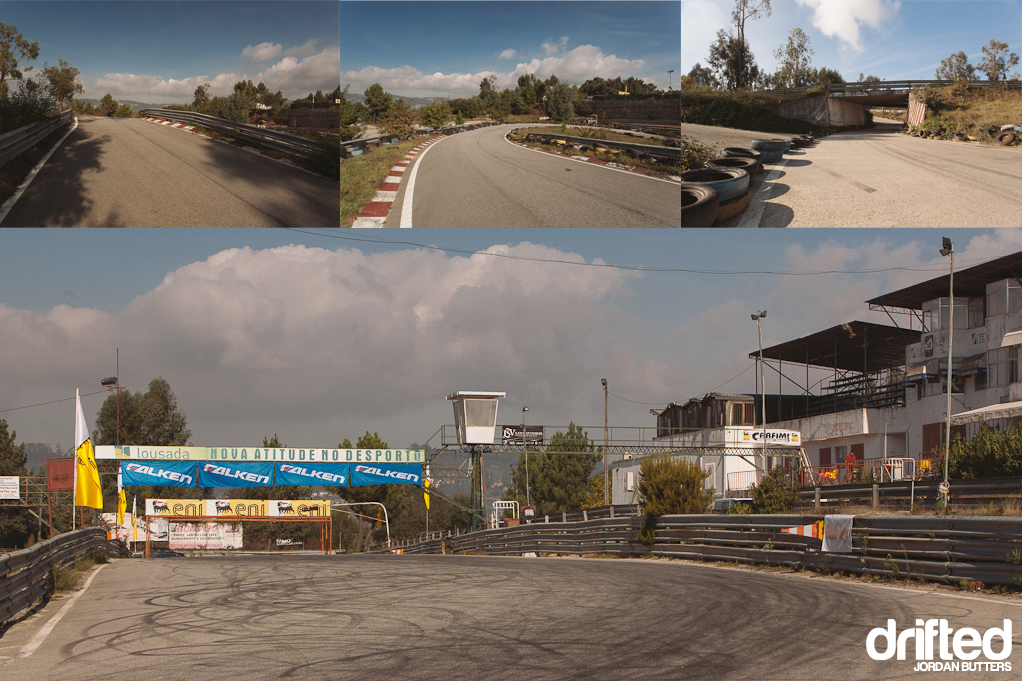 Eurocircuito da Costilha is a tight and technical rallycross track nestled in the southern quarter of Arcas. The track is quaint and looks forgotten about - rusty gantries sit precariously overhead, the surrounding vegetation is overgrown and parts of the track look like nature is trying to claim the space back. Posters in the briefing rooms alude to the circuit’s former glory.

The late former WRC champion Colin McRae has graced it’s surface and more recently the circuit has played host to the Portuguese round of the FIA European Rallycross Championship. 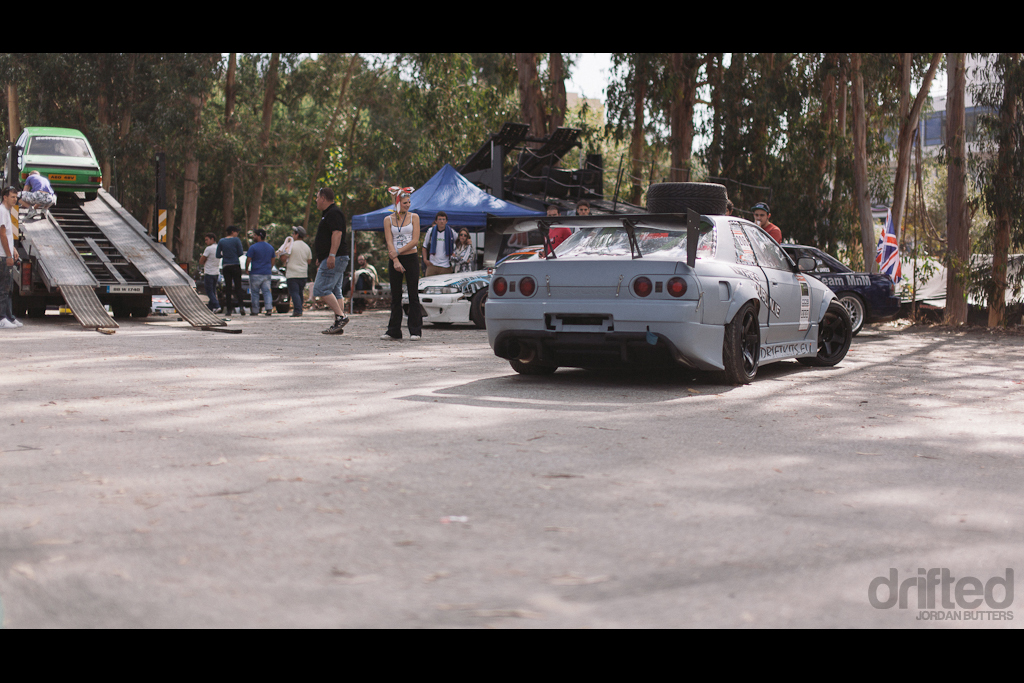 But for one weekend a year Lousada becomes a European drift nirvana. Drivers flock from all over the continent to take part in one of the most fun events of the year.

Being the last event on the calendar for most drivers means that there isn’t neccesarily any pressure to return home with the car in one piece. And with the armco-lined circuit made up of rear-clipping points only many achieve this goal. 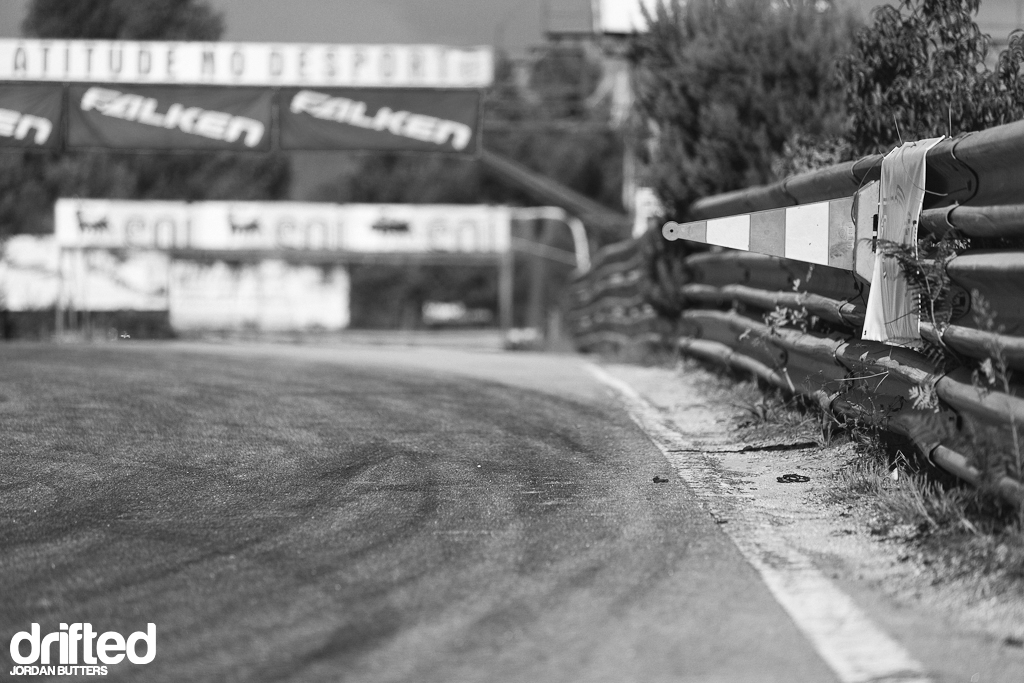 What makes things worse for those getting too close is that the track was designed to run clockwise, whereas the drift circuit runs counter-clockwise; meaning all the armco points the wrong way. When armco and rear quarters meet here the result is much akin to introducing tin and tin opener.

This year’s event saw a slight downturn in attendance from previous years. Times are hard in Portugal and it’s already small drift scene is on the decline as a result. 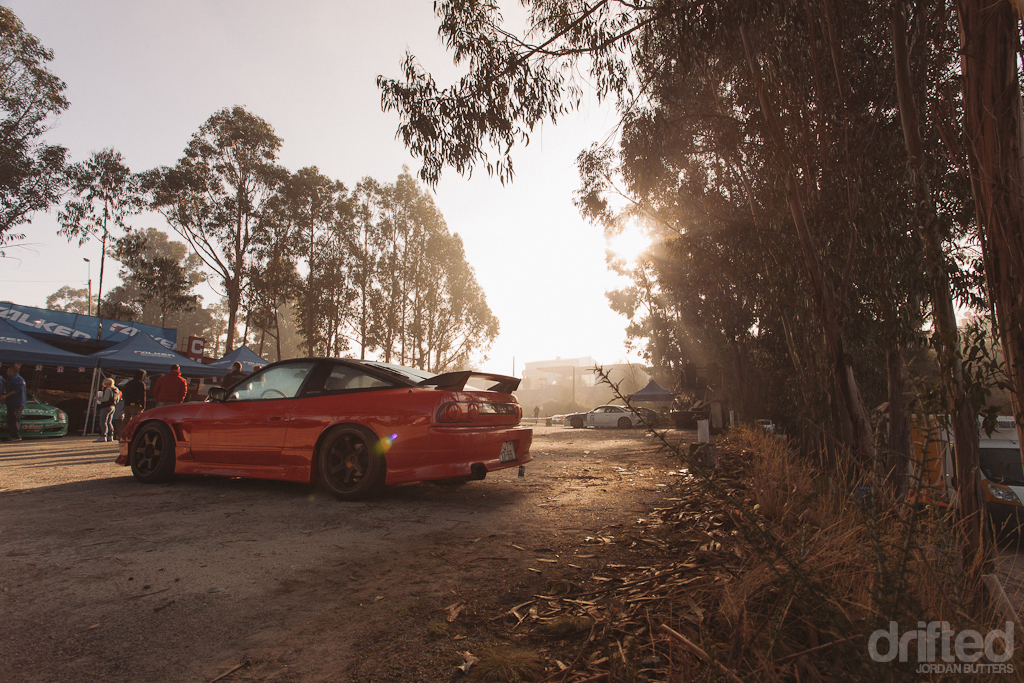 Never the less some familiar faces can be seen in the paddock, such as Johny Light’s well-prepared kouki S13.

And André Silva’s R33 and kouki S14a combo. The Skyline would be piloted, as in previous years, by UK driver and 2011 Lousada runner-up, Danny Eyles of former Japspeed fame.

Portuguese organisation is a laid-back affair at best, so as the alloted briefing time approached… 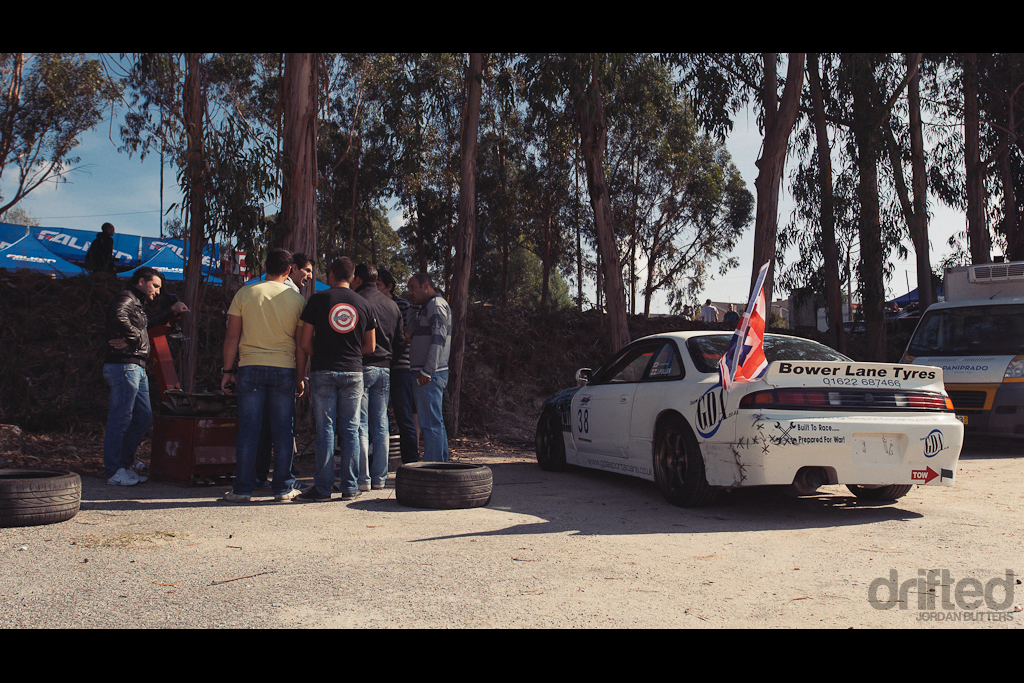 …and went by there was still relatively little in the way of action happening, allowing me to mill around the pits and grab a few shots.

Eventually the proceedings crept into life and the mandatory scrutineer checks got underway.

It’s an interesting place to hang out as you get to meet the drivers and generally have a nose around the cars.

Although the number of cars passing scrutineering without too much bother has increased in the few years I’ve been attending the event, mostly thanks to the watchful eye and helpful advice of the BDC’s Mark Buckle, you do still get to see some real potential horror shows! 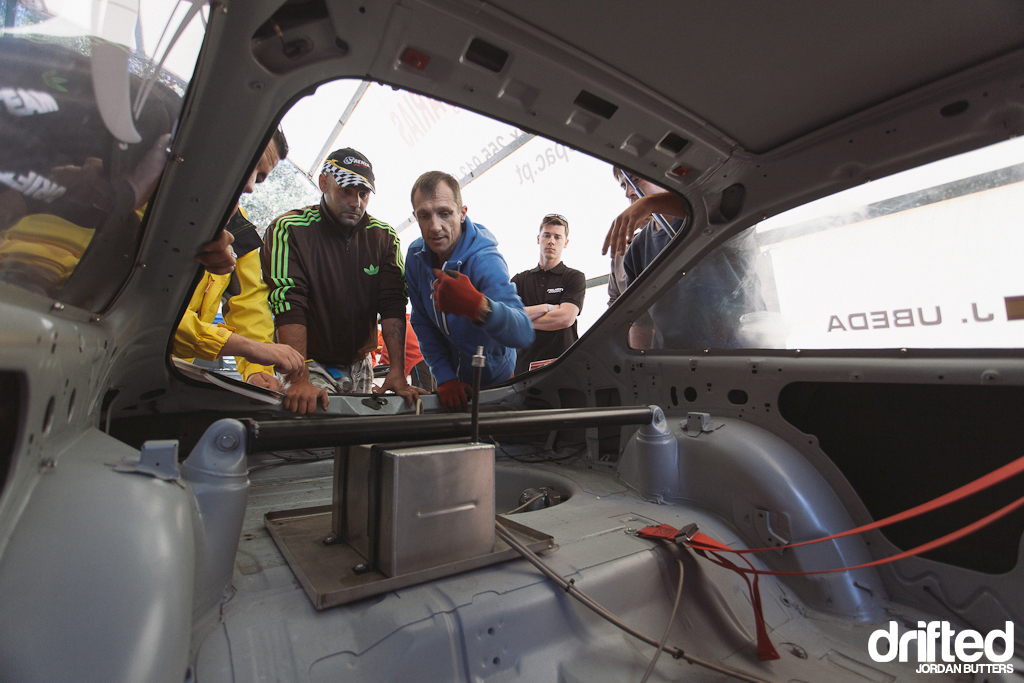 This Escort featured a race fuel cell…with no firewall…or roll cage. Hands up if you fancy twinning up against Lousada’s unforgiving armco with this petrol-bomb on wheels? Madness! 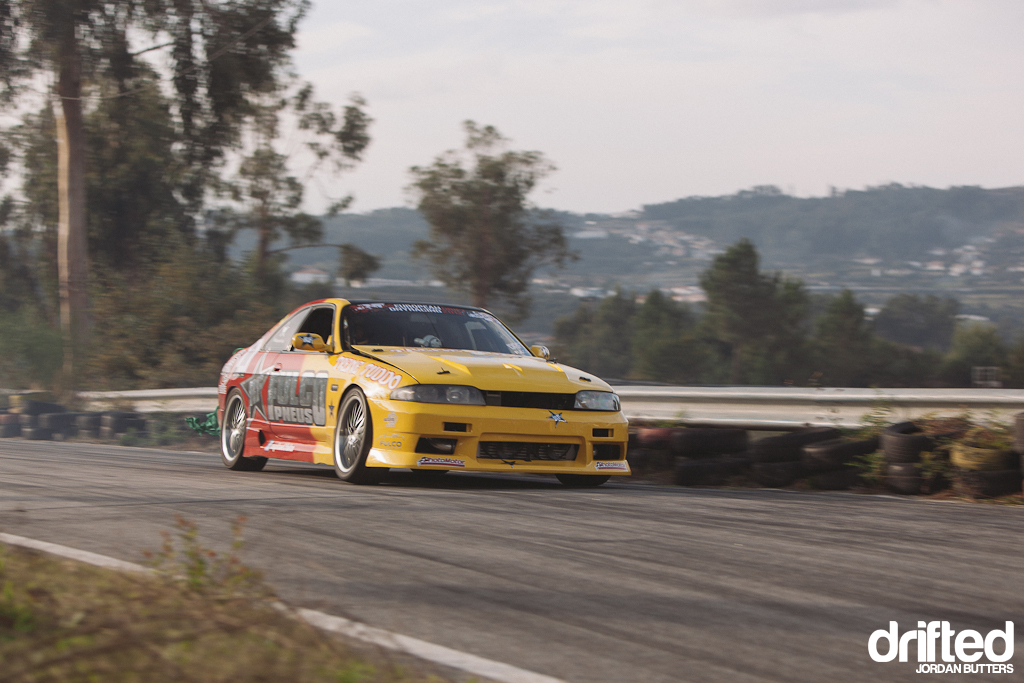 Practice eventually got under way with everyone making the most of the masses of seat time on offer. We’re talking 8-10 hours of open track here.

I always make sure I’m out on track for the first practice of the weekend as you usually witness some pretty spectacular comings together of car and wall. The first thing that struck me this year was that the drivers didn’t really seem to need all that seat time…

…right off the bat everyone was nailing the clipping points, running hard and running close.

The regular Lousada visitors were on point, former two-time Lousada champion Matt Carter was running ridiculously close to the wall and batting clipping cones off the wall left right and centre.

This was the second time that the UK’s Ricky Emery had attended Lousada and he was showing no fear.

By the end of the day his Soarer was considerably narrower than it began from wall running!

Nelson Rocha was balling so hard motherlovers wanted to fine him. He pedaled his Opel Kadett like his life depended on it. It’s cool enough seeing one of these go sideways but double cool seeing it going sideways on the absolute limit.

The Saturday evening of the Lousada weekender plays host to the Iberian challenge - that’s Portugal vs Spain to the uninitiated.

The top 16 kicks off at around 10:30pm. I say kicks off, the length driver introductions kick off. As we approached 11:00pm we were just about underway.

A formidable force from the off was 2011 champion Luis Lopez, running his purple S13 hard from the first run to the last. 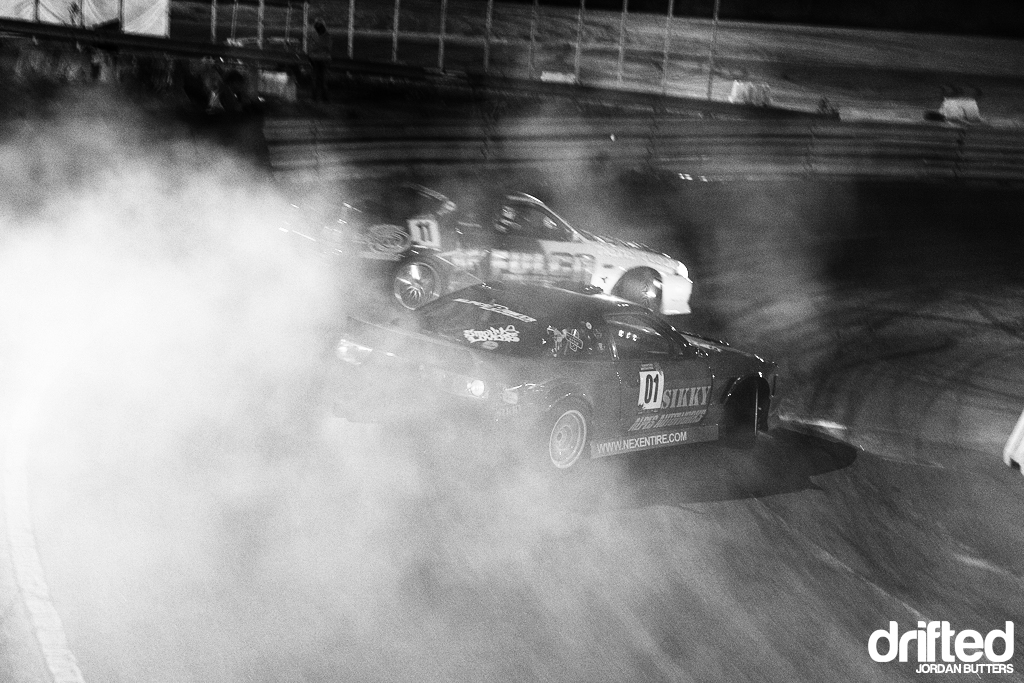 Drifting at night somehow intensifies the excitement by a multiplier of around 153.4.

Flames lick the armco, the headlights of the chase car illuminates the smoke from the lead car.

Sure it makes the photographer’s job ten-times more difficult but that’s half the fun. 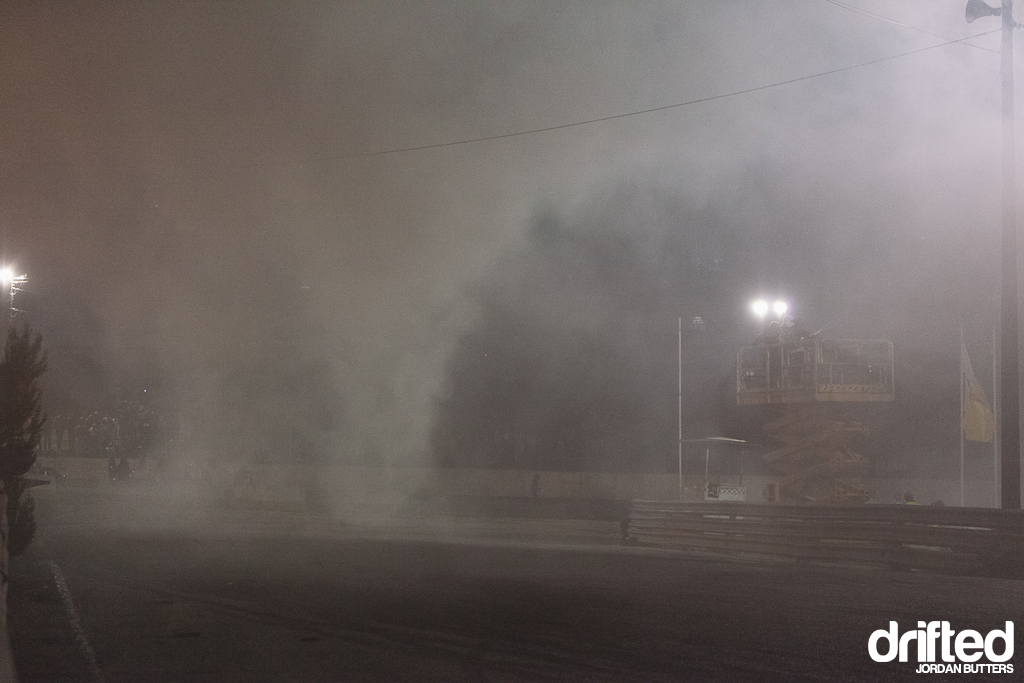 As the night progressed the amount of carnage slowly increased. I was even treated to my first smoke-tornado! Bizarre. 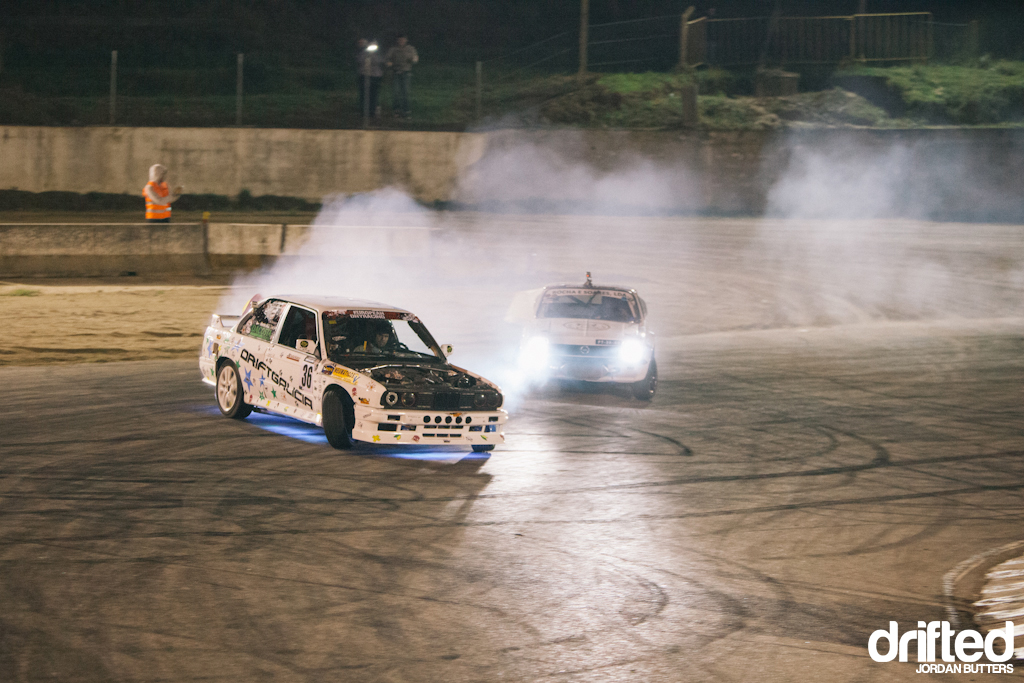 But the drivers never once backed down. These guys are used to driving on rough-and-ready tight and unforgiving tracks. It’s where they learn; a baptism of fire if you will.

Eventually we were down to the final – Luis Lopez vs André Silva. What’s more, André was driving with a broken foot would you believe it!? Both drivers were on point and trading paint and rubber after each transition - it was truly amazing to watch! 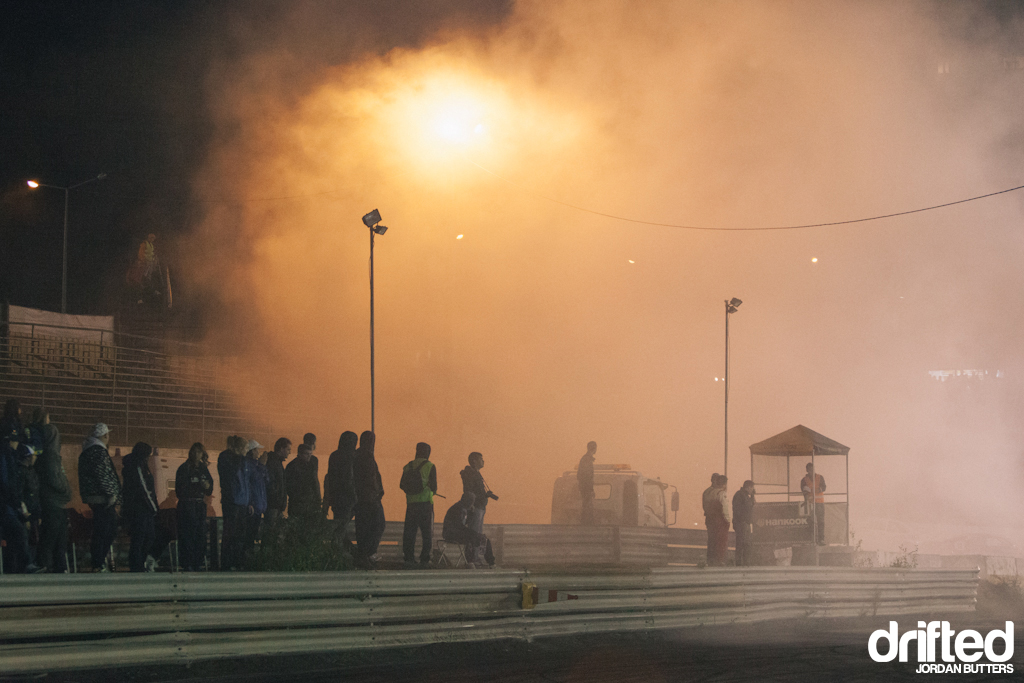 After the smoke settled the judges declared Lopez the winner and the masses of drivers returned to the pits to lick their wounds. 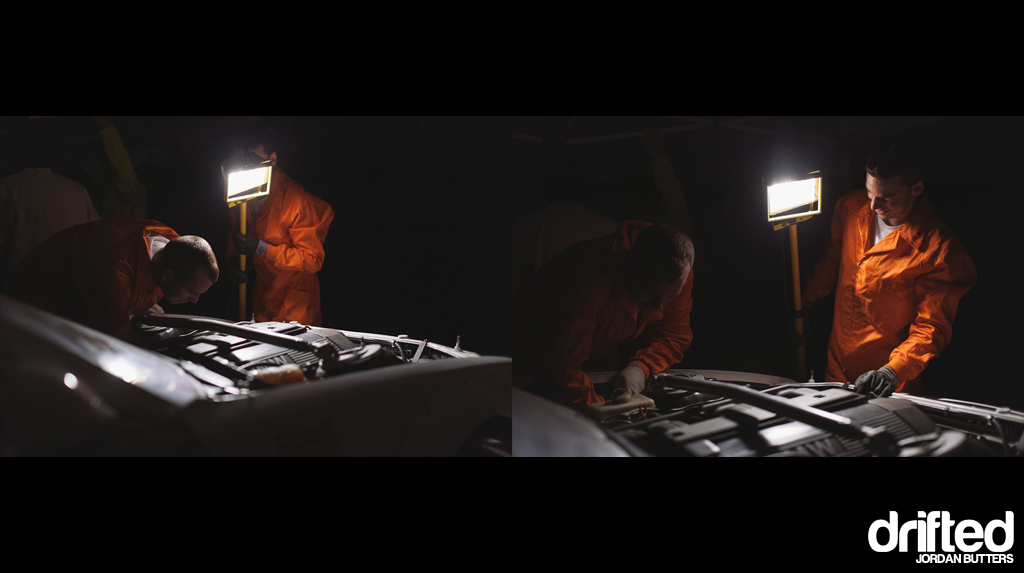 Night one of Lousada was in the bag. It’s 2am and the repairs begin to do it all over again the next day.

Stay tuned for part two, full gallery from day one below…