Let me tell you about a guy, his name is Gaelen Norman. He runs Northwest Nissans.com, has been part of the drifting scene in Washington for a long time, had put in countless hours of his time to help put on these awesome events. I forgot something, he’s also all the way from Canada. For as long as I can remember he has been the backbone behind the yearly “Golden Gardens” car show, held in Seattle, WA. Lately however, the popularity of the event itself had grown so large that cops started to be patroling the car show, parking lots were overflowing, and it was simply getting way to big for the relatively large park it was previously held at.

Insert Evergreen Speedway, home to drifters around the Northwest and the birthing grounds of many now Formula Drift licensed pro drivers. This year (And while golden gardens is still seeing many cars turning up anyway,) Gaelen decided to “attempt” a combination Drift/Car show mashup of an event. I arrived early with my buddy and it was already looking like the quivalint of Formula Drift traffic. Cars were backed up down the street for miles waiting to get in and hopefully find a place to park, with the main lot having quite a few nice cars while the main car show was held closer to the track entrance, put on in part by NWMotiv.com. In short this event was more successfull than anyone ever thought possible, parking was packed, and the grandstands had more people than ever seen at a regular drift event. 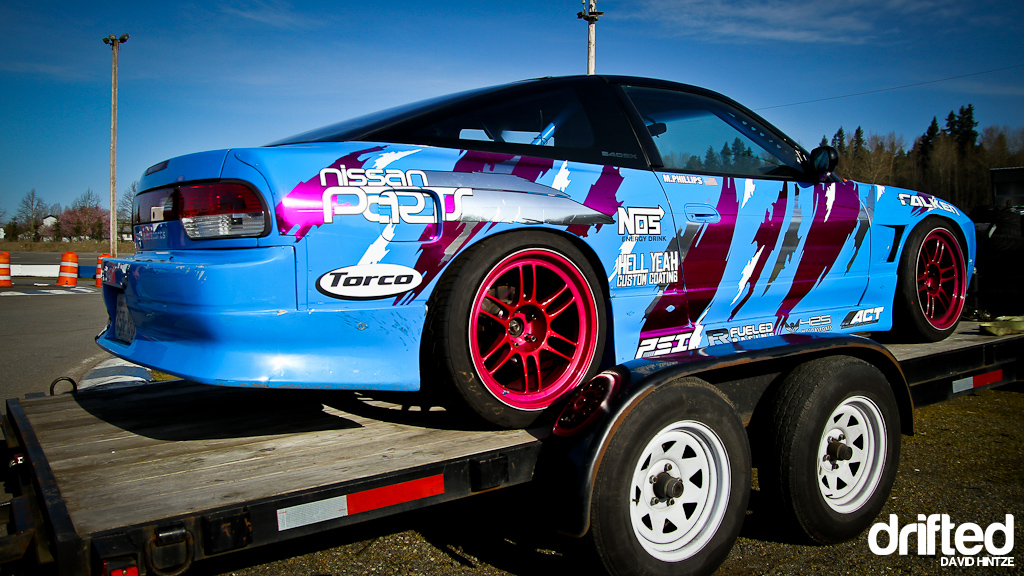 Here’s Mike Philips car, just got finished getting his new vinyl workup done, if any of you have been keeping up with Formula Drift you’d have seen the unfortunate events that led to the amazing piece of work getting a crunched front end.

Drivers Meeting was held fairly early as the grandstands started filling up from all the people arriving or who were previously checking out the car show up front. NOS energy was onsite keeping us all awake, I know the below fella could use some for sure!

This is Gaelen. The drive to and from Canada can be quite tiresome, and from what I can tell looks like he didn’t get much sleep the previous night. No matter, Canadians seem to have an extra energy reserve for when they cross state lines, and that kep him running around all day making sure everything was in order. Like a boss. 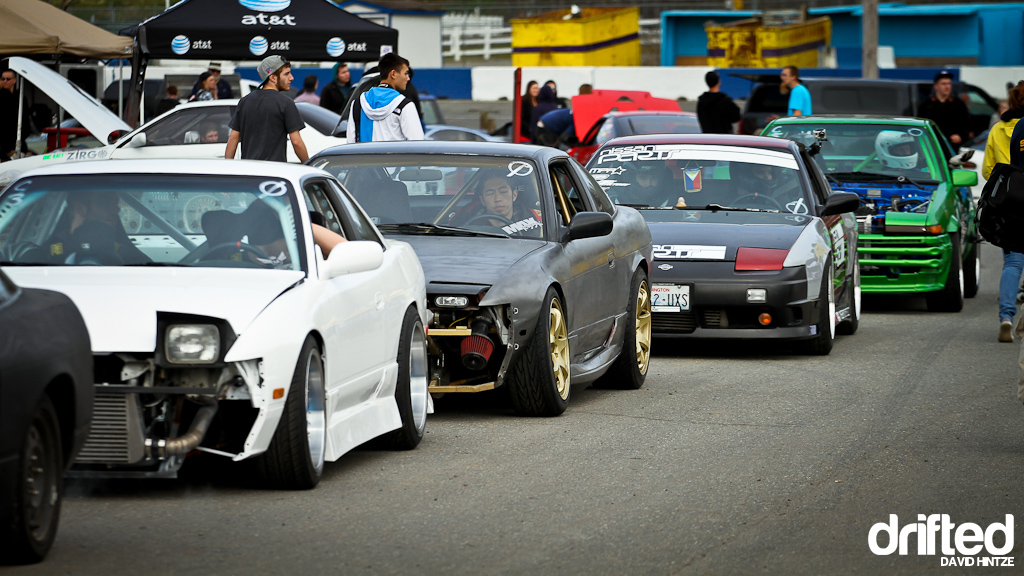 Drivers started lining up at the starting area, A well balanced group of people included Pro, Pro-Am, and Grassroots drivers. 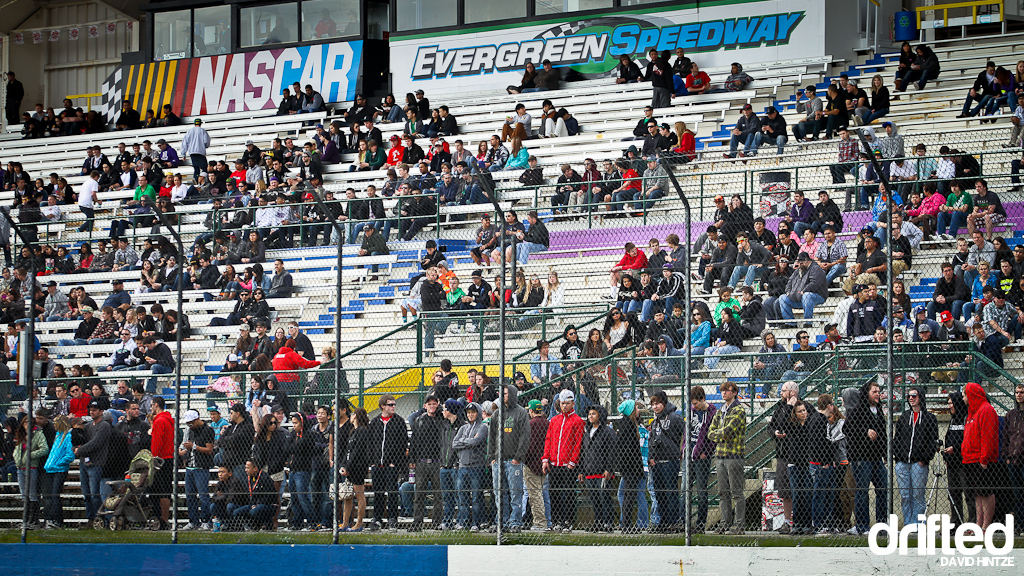 This is what part of the grandstands looked like, and that’s a lot, seriously. I haven’t seen a drift event at Evergreen Speedway (cept for Round 5 of FD) that has had even a fraction of that amount of people.

The day started with an open drift of sorts, as drivers tested out their cars in front of an audience with intermittent 5/8ths runs by our pro and pro-am drivers. 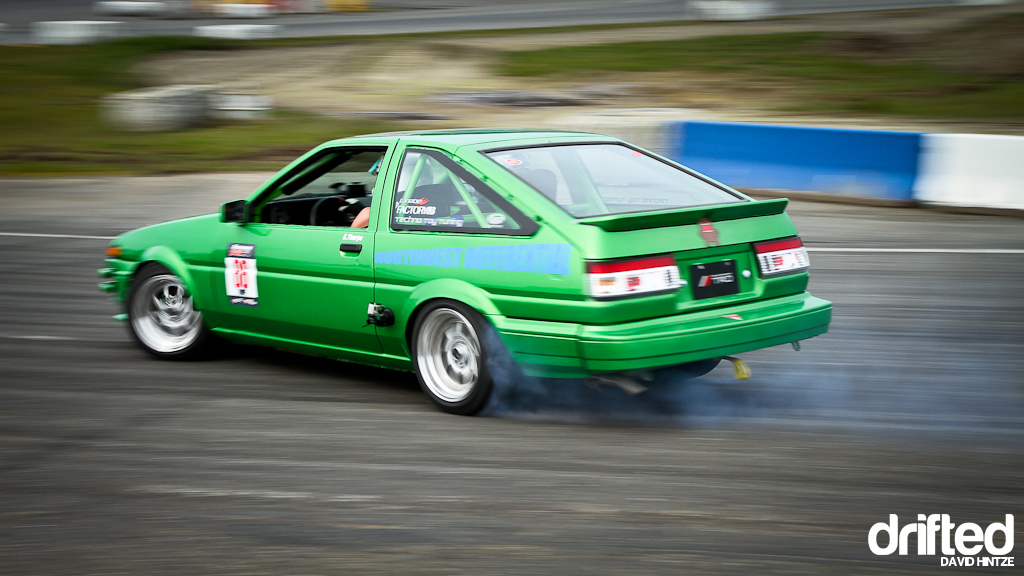 Kelly Thorpe (aka “Muscles”) tackles the 3/8th bank in his 1UZ v8 Corolla.

Kyle Pollard in his 1992 Nissan Silvia K’s on the 5/8th bank. His car is vinyl free in preparation for his brand new design getting put on before Long Beach.

Mike Philips on the 5/9th in his NissanParts Nissan 240s. New vinyl design as well for this years competition. Today was the last day our northwest drivers really got to test out their cars before heading down to Round 1 of Formula Drift. 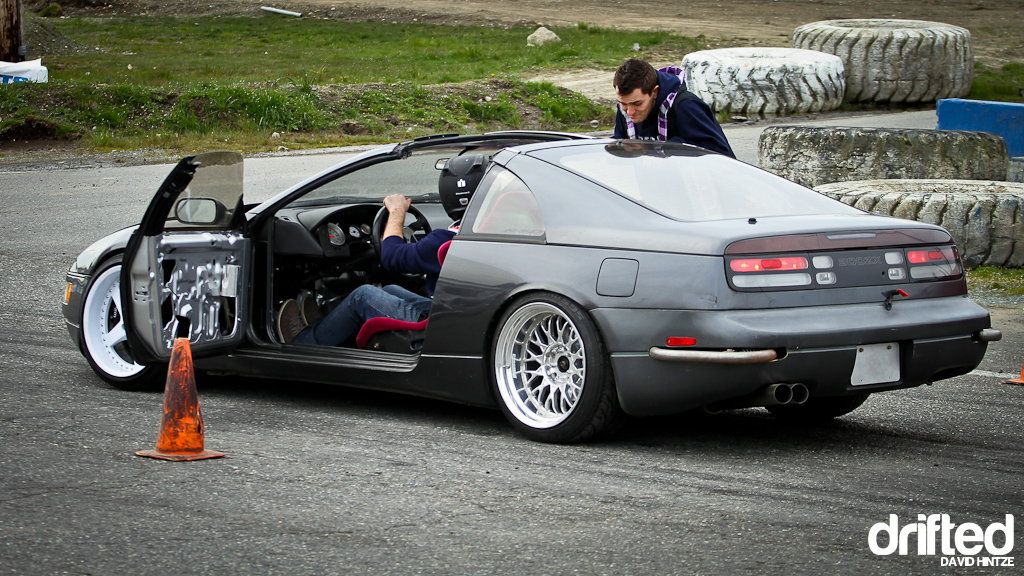 This car was new to the track, Ruslan has been working on this car for some time now and unveiled is his Grassroots Garage Autohero 550+whp SR20DET powered 300zx. This car is super sick and check out those rear wall tapping, shock reinforced bumper bashers! 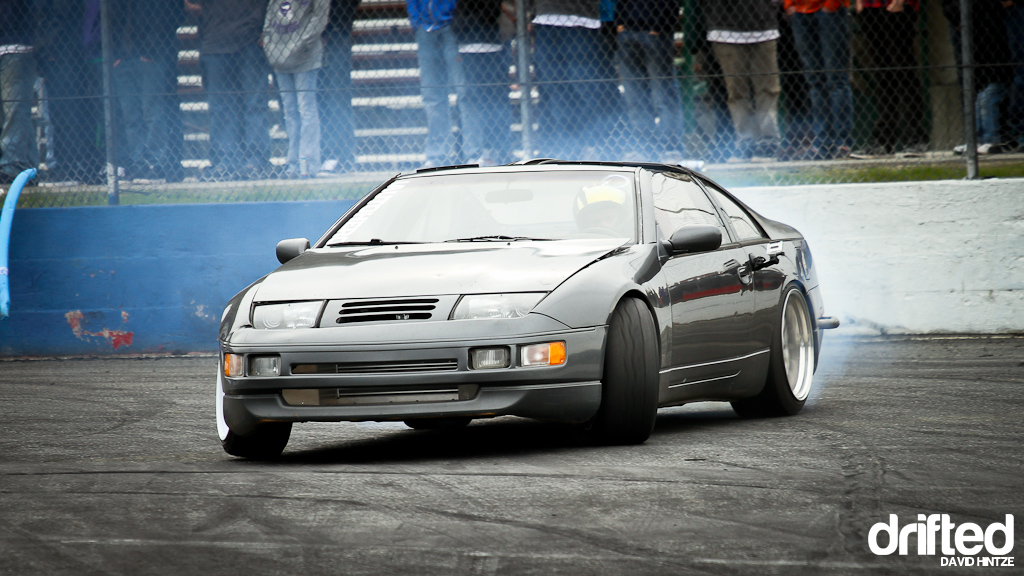 The car is mean, just like the drivers driving style. Love it. 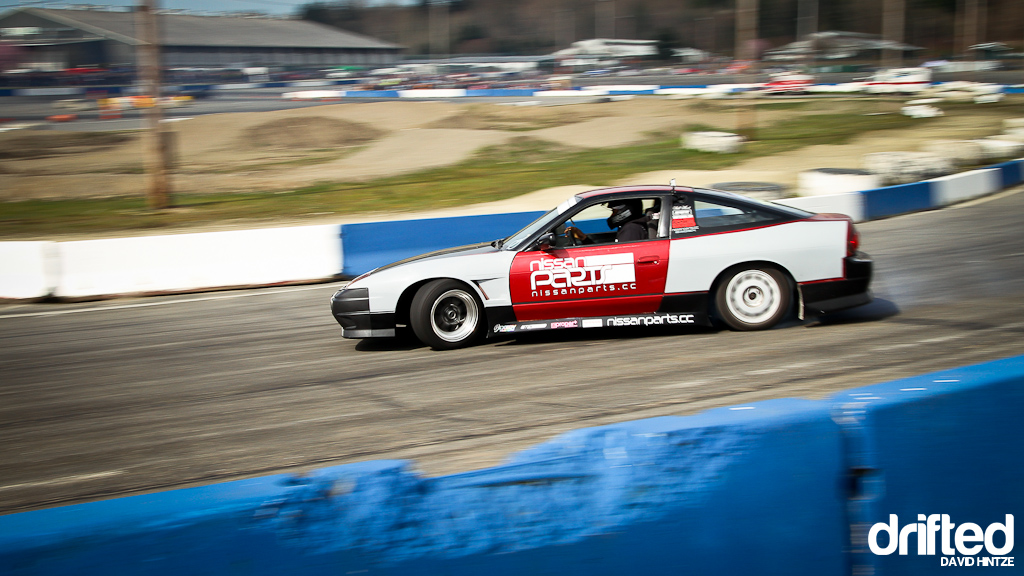 Kelly and Ian throw down a tandem run on the 5/8th bank. 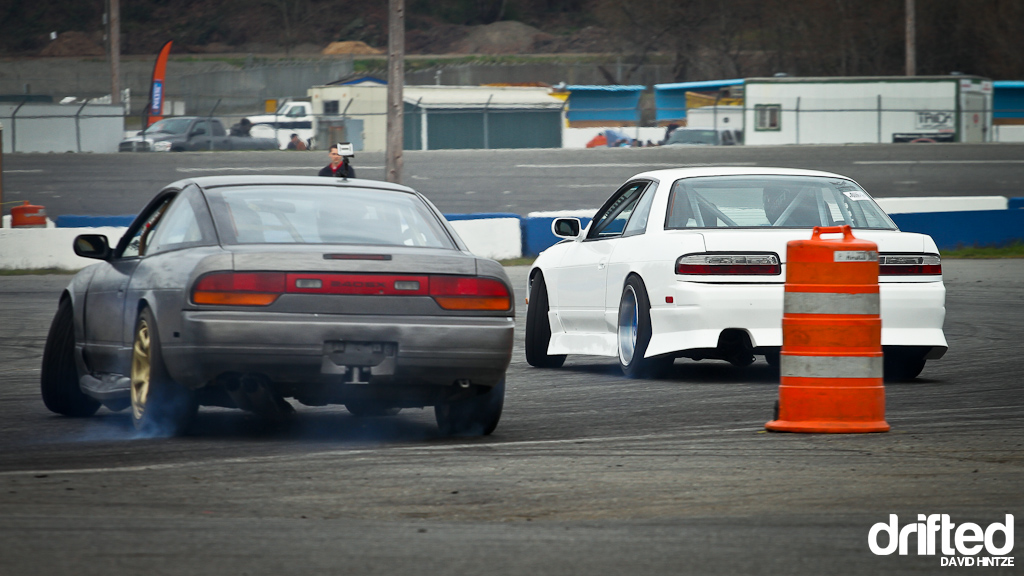 Joseph Lin in the back there was among a couple drivers that were throwing down triple tandem runs all day.

Here he is again coming down the 3/8th bank exit front end free, His car simply looks way better like that I swear. 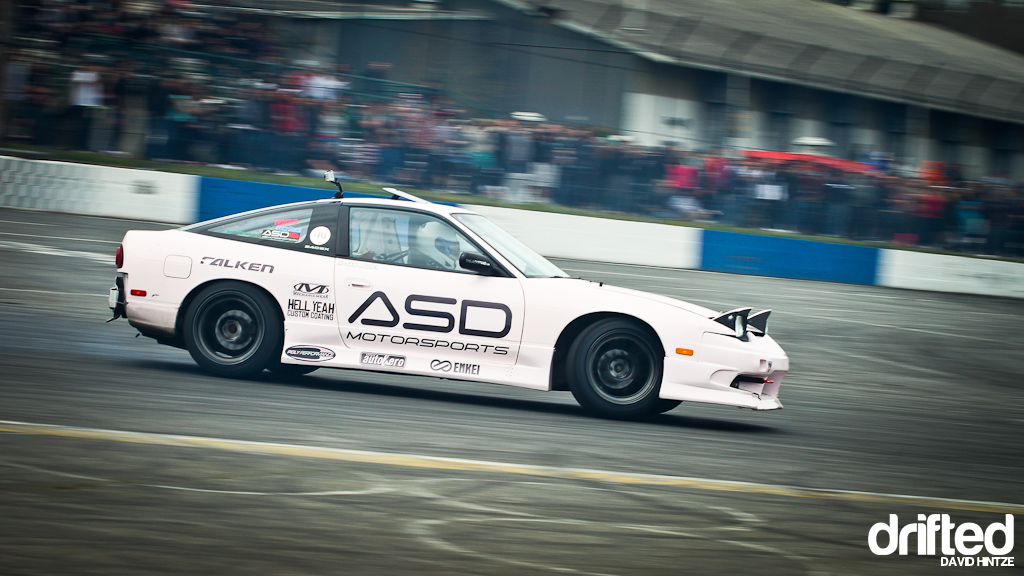 Nikki San Miguel has a bunch of new sponsors this season as she competes. 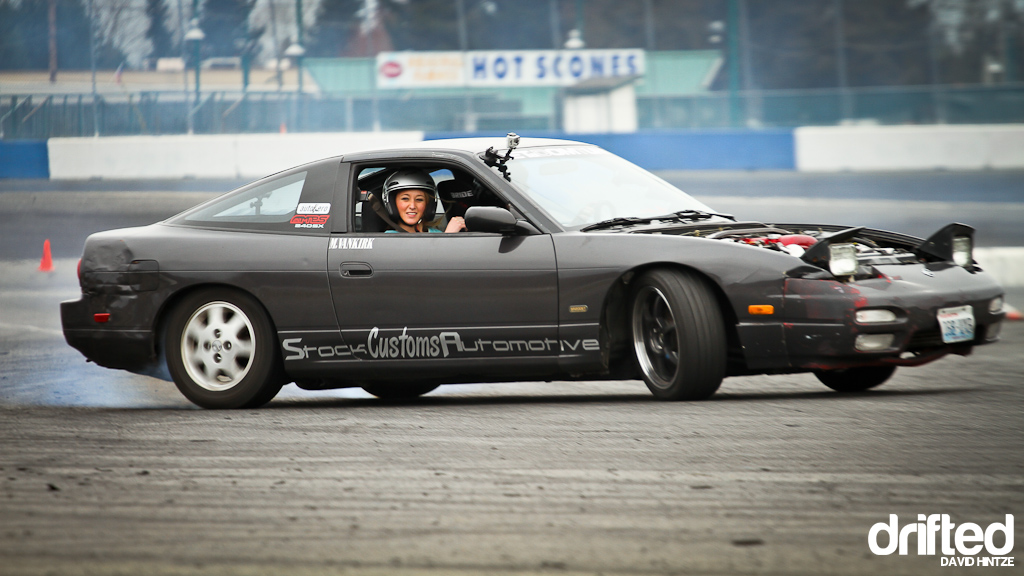 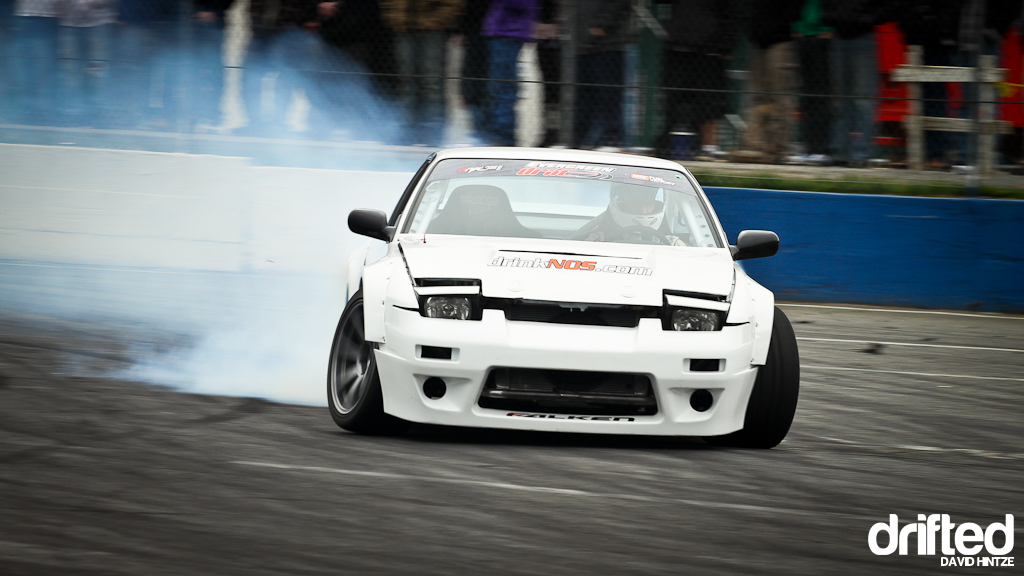 Andrew Coomes in his Rocket Bunny Nissan 240SX, Another of our northwest FD licensed drivers. 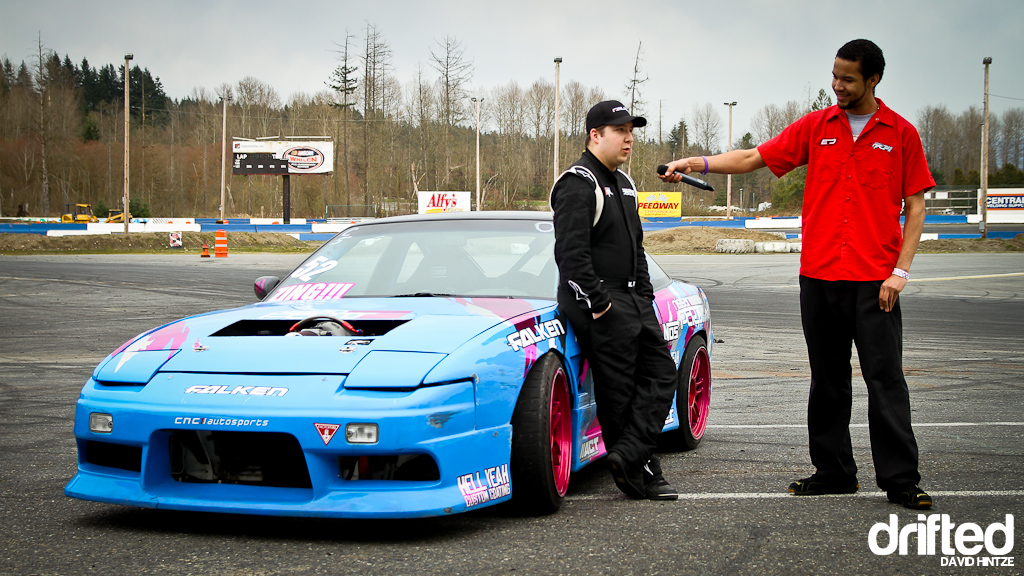 The voice of the northwest (aka AfroDrift) talks with Mike Philip about this upcoming season and Formula Drift. I also managed to snag enough video clips throughout the day to put together this short video: