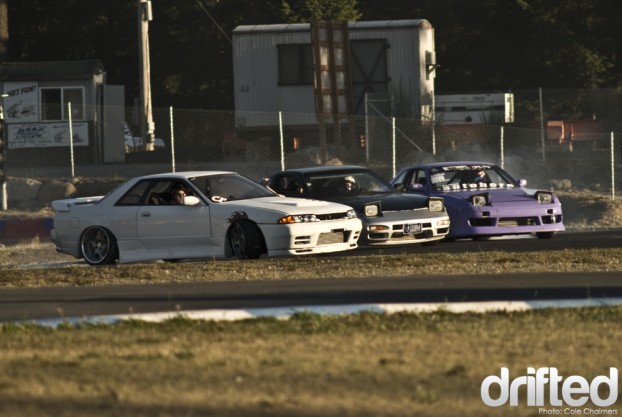 There was definitely a great disturbance in the force this weekend at Pacific Grand Prix Motorsports Park in Kent, Washington. To some Jedi, it may have felt like the voices of hundreds of tires screaming out in pain, as lap after lap drivers were shredding tires, side by side, at the first annual ‘PGP Wars: Triple Team Tandem’ event. So let’s go back a long time ago, into a galaxy far, far away and do a re-cap of Saturday’s action! (Caution! Plenty more cheesy Star Wars wordplay ahead! haha) 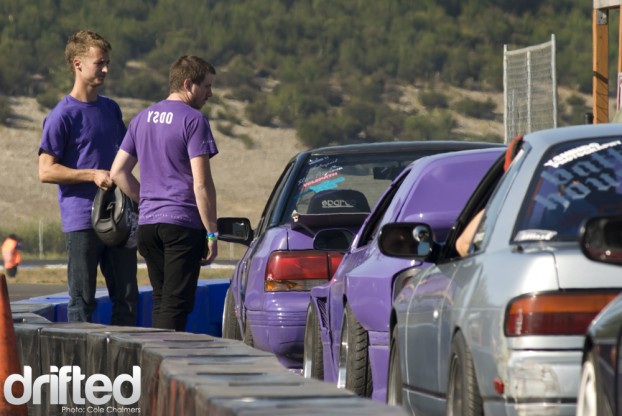 I rolled down across the border with the Drift Union boys and their purple tire eaters. A pretty uneventful drive, other than the axle (brand new by the way) on Logan’s Legacy ending it’s life 20 minutes out of Kelowna. Luckily, Logan is used to axles snapping on him and his rwd converted subaru and had us back on the road within 15 minutes. Something for you to think about if you’re considering turning your Subaru in a drift car, you’ll be spending just as much on axles as you will on tires. Also, the axle Logan put in… was his only spare in case he broke one drifting… we had our fingers crossed the rest of the trip. 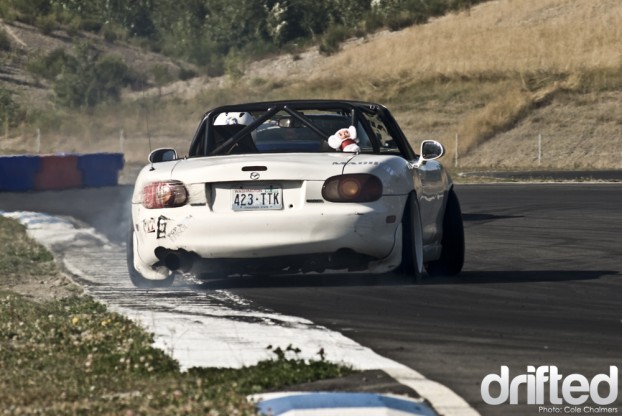 The track at PGP was originally intended for Go-Karts, and is still used by them daily. Thanks to some Jedi mind tricks though, it was opened up to drifting this year and quickly gained a huge reputation as a super fun track, though very tight at 30 feet in width. Made it like running the trenches of the Death Star. The driver’s paid no mind though, taking advantage of every inch of the track, sliding on the rumble strips and often dirt dropping to the delight of the crowd and the cringes of the track owners. 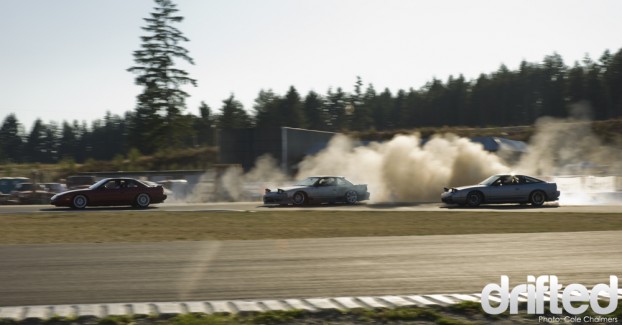 The judging for the Triple Team Tandem was based on the first two corners of the course. A long straight stretch led into the first corner, a tight 180 left that fed into the right handed turn two. A large portion of the straight stretch was designated a “cool down zone” where drivers were to take it easy as to not over-do it into turn one and go flying off course. Apprently R2-D2 didn’t relay that message to the purple duo of Drift Union, designated “The ‘Eh’ Team” for the event. While they started out with average entry speeds into corner one, it wasn’t long before they were pinning it at light speed down the straightaway so they could start their entries further back with some of the longest ebrake holds this side of the galaxy. Logan was nailing dirt drops on his entries with the pin-point accuracy of a Jedi master. 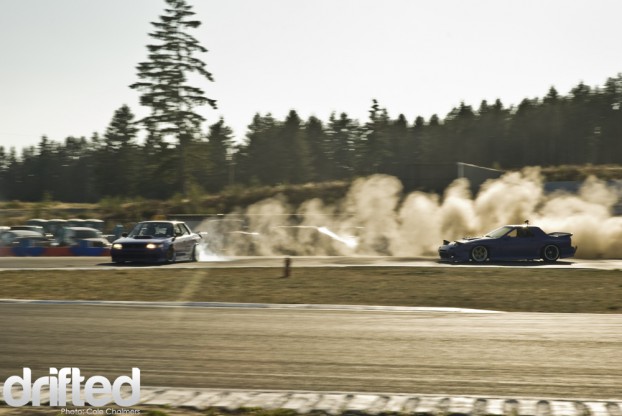 Quickly realizing that they were up against some stiff competition, the locals pulled from the force and stepped up their game. They weren’t about to lose on their home turf without a solid fight.

The ‘Battle House!’ crew (aka “Team Glen and the Double Rainbow”) put in solid runs, keeping close all day.

“Team Edward” also stayed in tight formation throughout the competition. 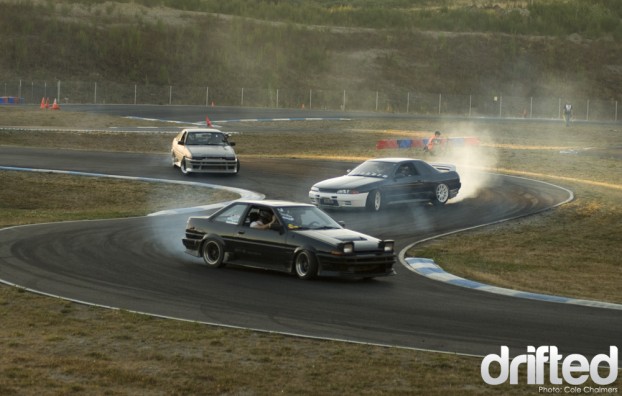 Matt Panic originally intended for Team “Star Bear” to be all ‘rollas, but adopted Lucas Perez’s skyline to make a full wing. 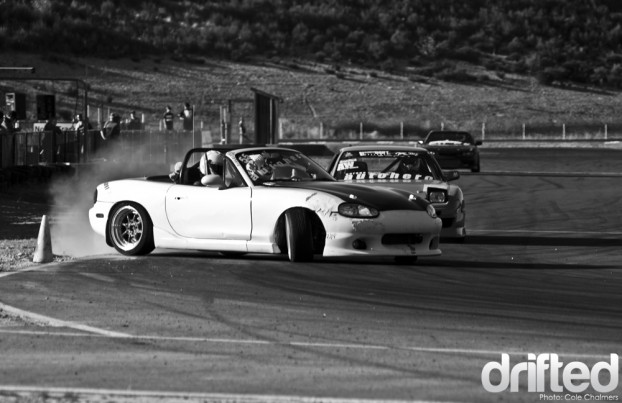 Mike Lukomskiy was definitely one of the front runners catching up to the Canadians. I was super impressed by his driving all day, for a tiny car that’s meant to stick to the road he was throwing it around like it was an s13. All of his runs were super consistant, stylish, and smooth. You don’t normally think of drifting when you see a miata, but I think Mike is out to change that. 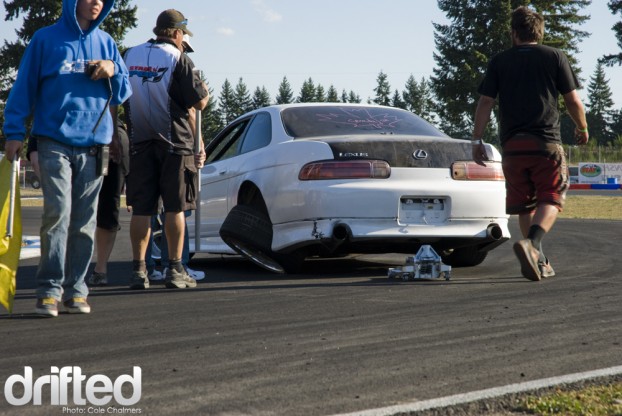 The third driver in “The Eh Team”, Steve Thompson, started out his day well in his Soarer. He used his smuggler’s skill to navigate his millenium falcon of a car through the constricted corners of PGP. I think I spotted some Jawas sneaking around his car at one point though, and eventually their mischief caught up to Steve. 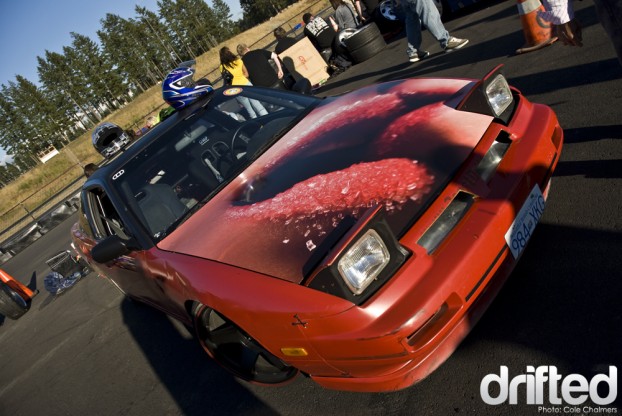 Matt Do was nice enough to lend Steve his sugary-make-out powered s13 for the remainder of the battle though. 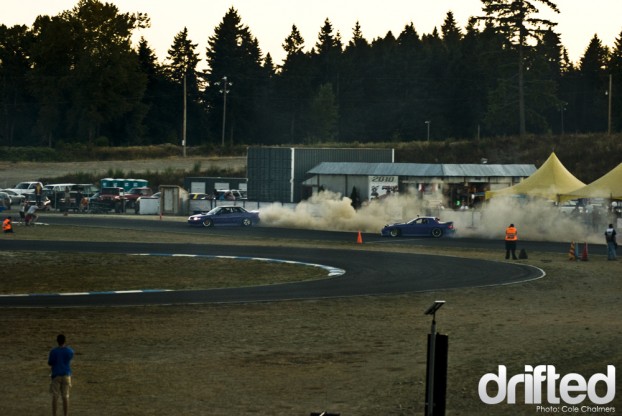 The sun started to go down, but the action on the track was far from over. “The Eh Team” continued with their gangsta entries that everyone was loving, and by the end of the day most of the media was sitting on corner one to get a shot. 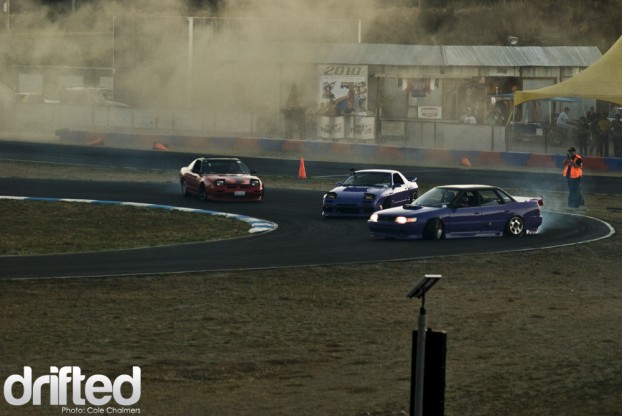 The force was strong with “Team Edward” too though, and even while running only two drivers in the final rounds, it was clear to see they were strong contenders for podium. 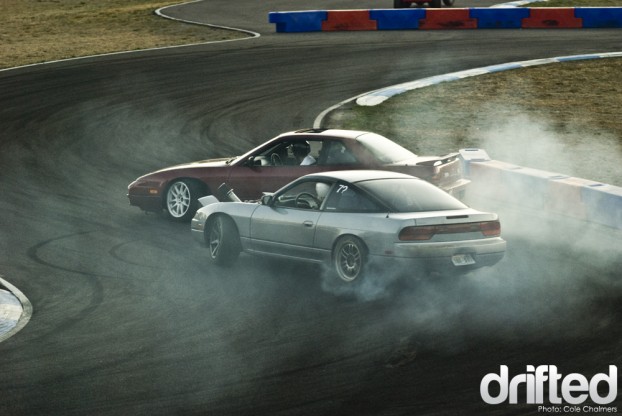 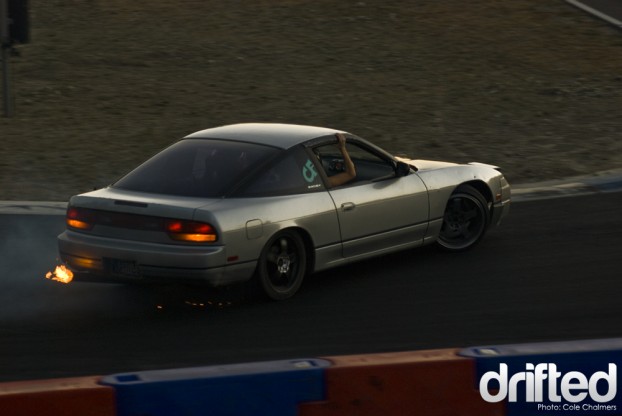 This S13 decided it was time to kick it into lightspeed

Then to put on a final show, all the drivers pulled onto the track for an epic session of smoke, sparks, and fire. There was at least 15 cars on track at the same time and I couldn’t think of a better way to end the night. I went to the inside of the apex corner one and slowly moved closer and closer until I was about 8 feet from track side. I’m surprised I didn’t get called back by a track employee, must be those Jedi mind tricks “I’m not the photographer you are looking for… I am allowed to stand here…” 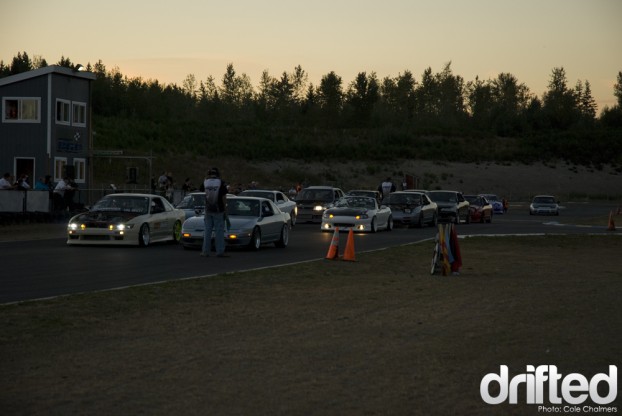 Lining up for awesomeness.

Mike Lukomskiy was shredding hard to the end. 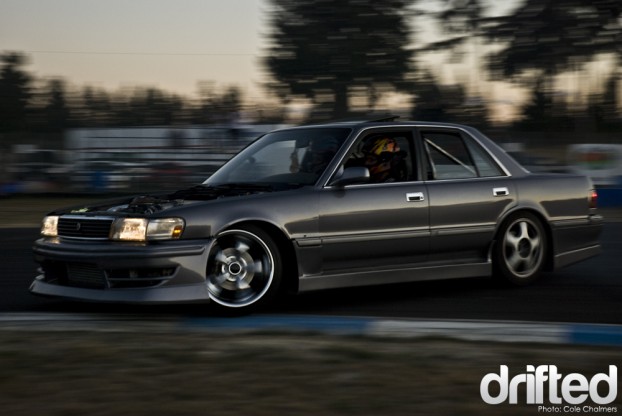 I’m a BIG cressida fan, and this one was super clean. I didn’t catch his name or what team he was on but he definitely killed it on track. 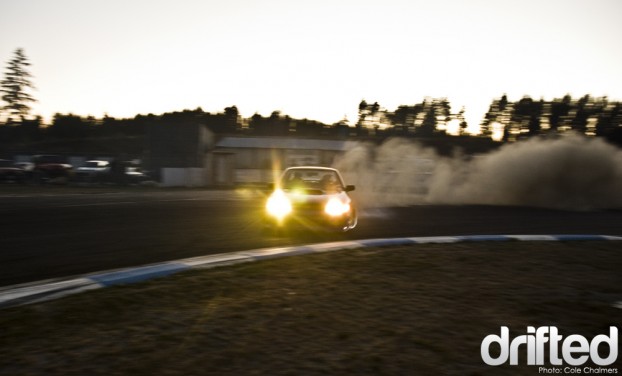 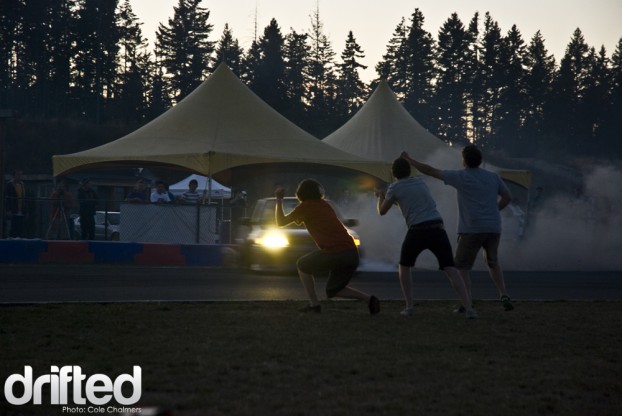 …But the Judges loved it. 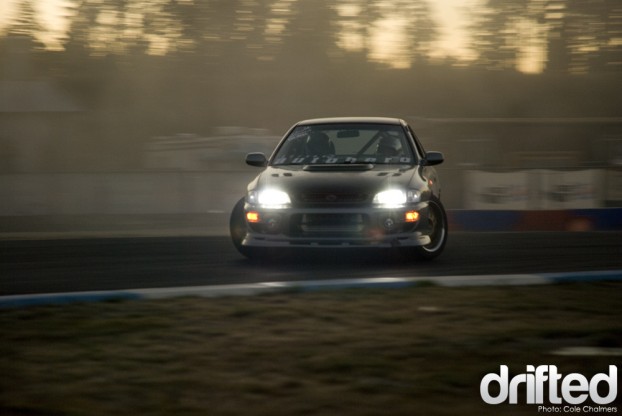 Stephen Trigueiro’s Subaru was having some technical issues early in the day (I heard a faulty power converter in the hyper-drive). I’m glad he got back on the track for the end because that gc8 is dope! 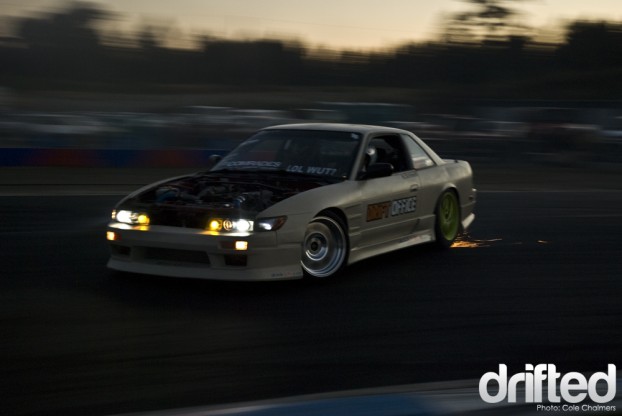 Nick Schnell of Drift Office was also on hand to add to the haze of tire smoke. 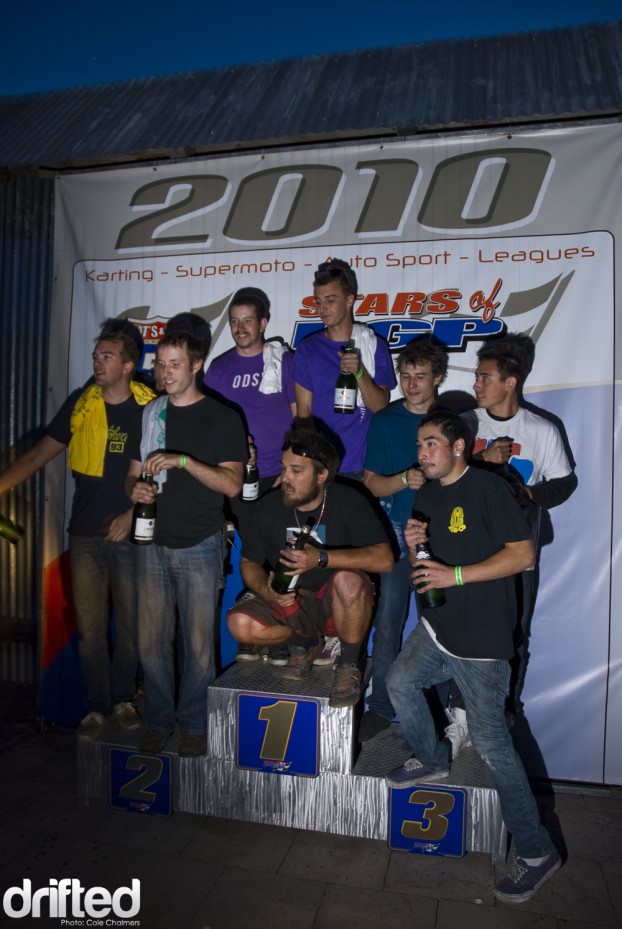 When the smoke finally settled from the epic battle, “The Eh Team” was chosen as the winners. In second place, stood “Team Edward” and in third “Team Instant Party”. On top of the Tandem win, Eh Team also picked up the “Man-tries” award, for their gnarly high speed/early initiations. Can’t wait for Episode II of PGP Wars,  which should be titled “Attack of the Canadians”. Until  next time, CHEERS! 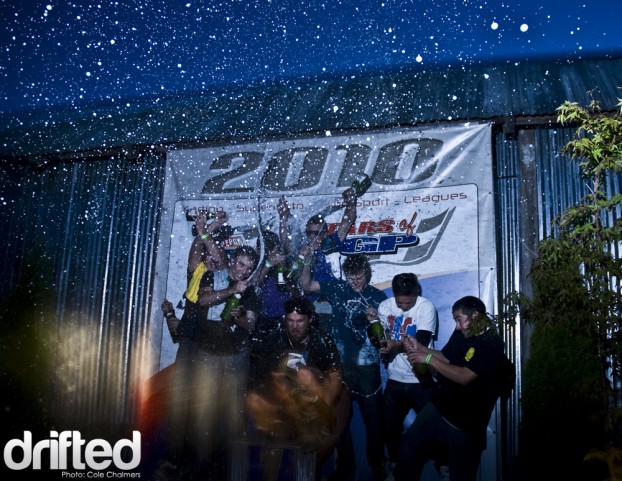 Full gallery of the event can be found here.