EVENT: Heaven on Earth? This is GATEBIL!

Have you ever wanted to experience a weekend of pure mayhem, surrounded by like-minded people that have ventured from all corners of the globe in search of the exact same thing? If so, leave your sanity at the entrance gate, because this is a weekend like no other. This is the magic of Gatebil!

I arrived at Gatebil venturing into the unknown, like just about everyone else reading this article I’ve seen the coverage and videos that have surfaced around the internet in previous years. Last year I made myself a promise, whatever I did this year, I would ensure that it included some Scandinavian madness.

It’s always a lot more interesting for me if I turn up to an event without knowing too much about it. All I knew was that I was about to experience a drift event like no other, it was time to push the competitive aspect that I’ve seen so much this year to one side and kick back and enjoy the ride.

Norway is a fascinating country, with many strict laws in place it felt a whole lot more restrictive than the UK. Whilst enjoying the stunning Scandinavian countryside for what felt like an eternity during a mostly 60km/h journey, it was unbelievable to think that we’d soon be arriving at what is arguably the craziest car festival that the planet has to offer.

I’ve held extremely fond memories of Awesomefest held at Mallory Park since the first and last year it was held in 2011. I’ve always lusted after experiencing an event like this, and sadly due to the closure of Mallory it still seems to be a long way away. Sometimes if you want something then you have to be prepared to travel to it, rather than it travelling to you.

I love competitions more so than most people, I enjoy the intensity, the thrill and the emotion. I also feel that there is a big space in drifting to push those feelings aside and just go balls-out with your friends, it’s even a chance to put rivalries to one side and remember that everyone is here to have a good time. 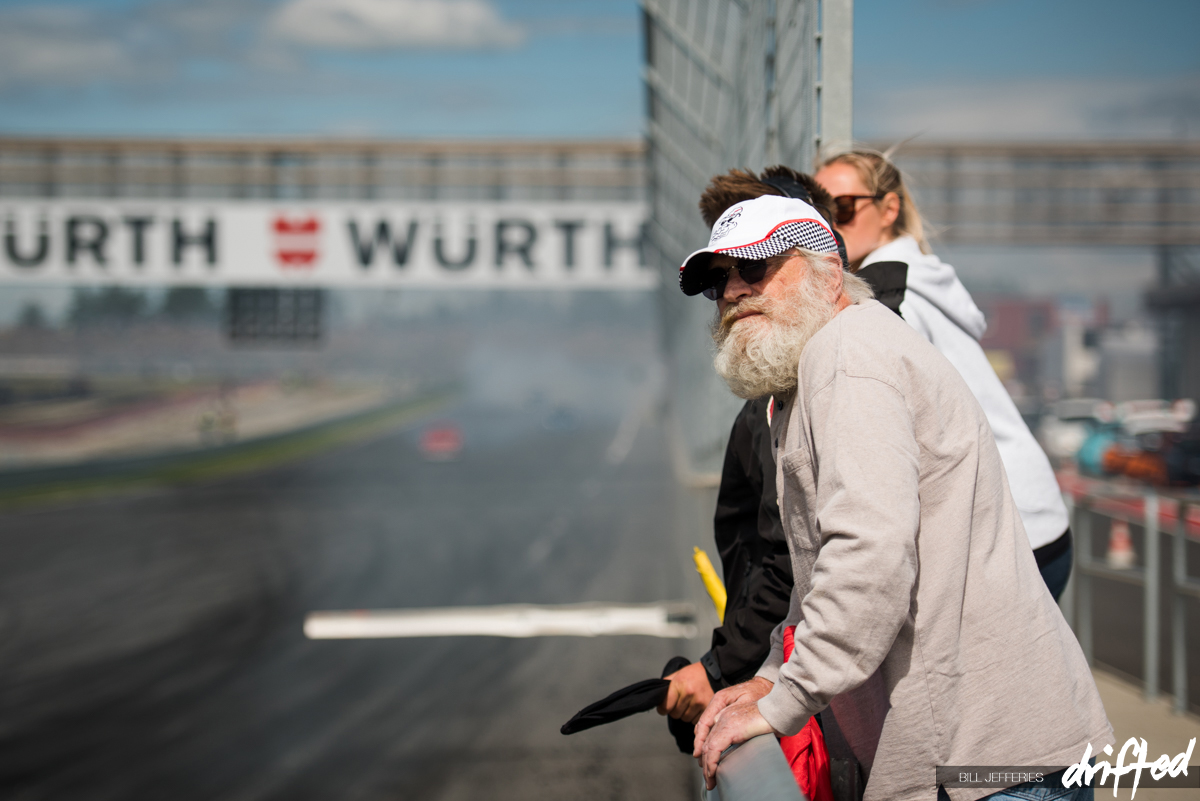 Familiar faces jump out at you more frequently than you’d ever expect, it feels like every time you turn your head that you recognise someone from somewhere. Sometimes you’re not so sure who it is, but one person who no-one can mistake is Bil Baldwin. It was a pleasure to have the chance to see Bil occupying the spot that everyone knows him for, stood against the harshest wall on the track!

I knew that I wanted to get a shot from the exact spot I was standing on, I’m sure most of you recognise if from various places online. Drivers head for the clipping point on the wall using insane initiation speeds before pounding anyone who dares to stand near in unforgiving amounts of debris. 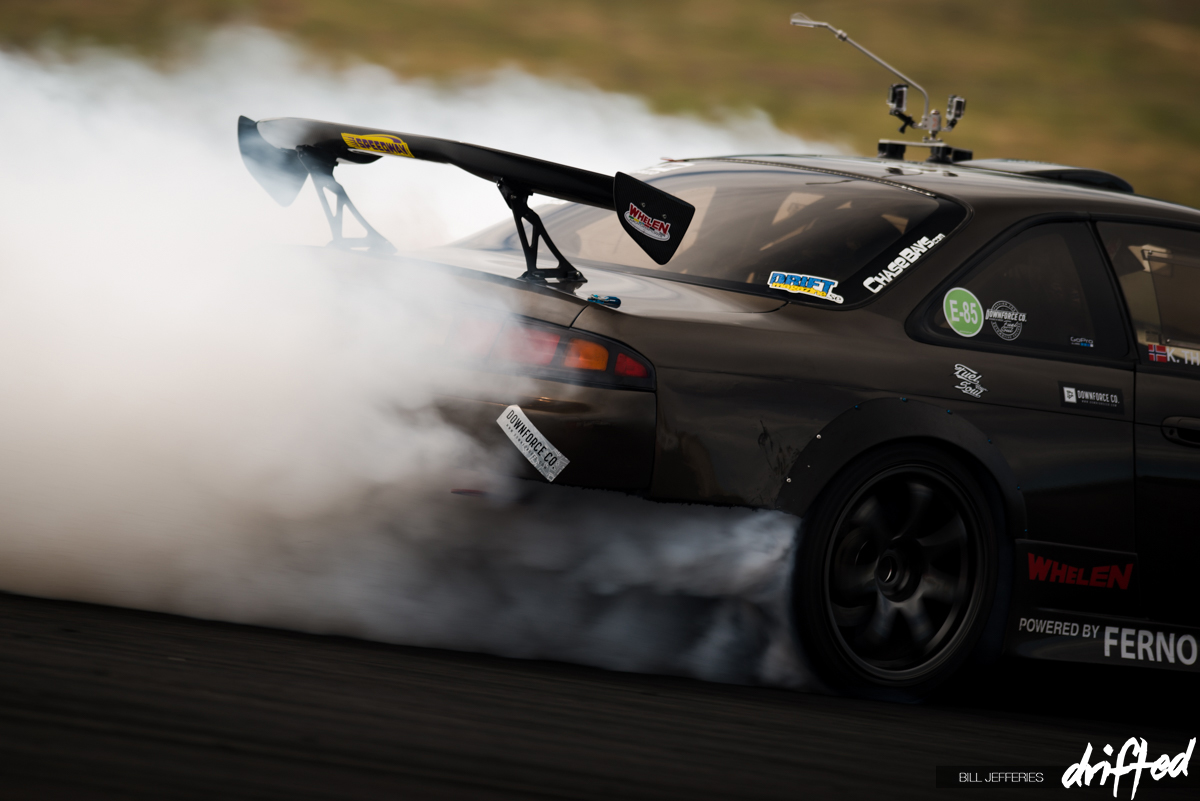 I must have stood here for a good 15 minutes before realising that getting a shot here really is no easy challenge. I’m not one to give up on getting what I want at a track, but with two important events coming up in the following weeks I didn’t fancy the risk of damaging the camera gear, or myself! I had already found myself racking up excuses on why I need to return before the event had even fully kicked off.

One thing that took me by surprise after seeing the timetable was that the amount of variety on show here was huge. I’ll admit that I expected Gatebil to be around 90% drifting, it was substantially less than that, but it was certainly not disappointing in any way. 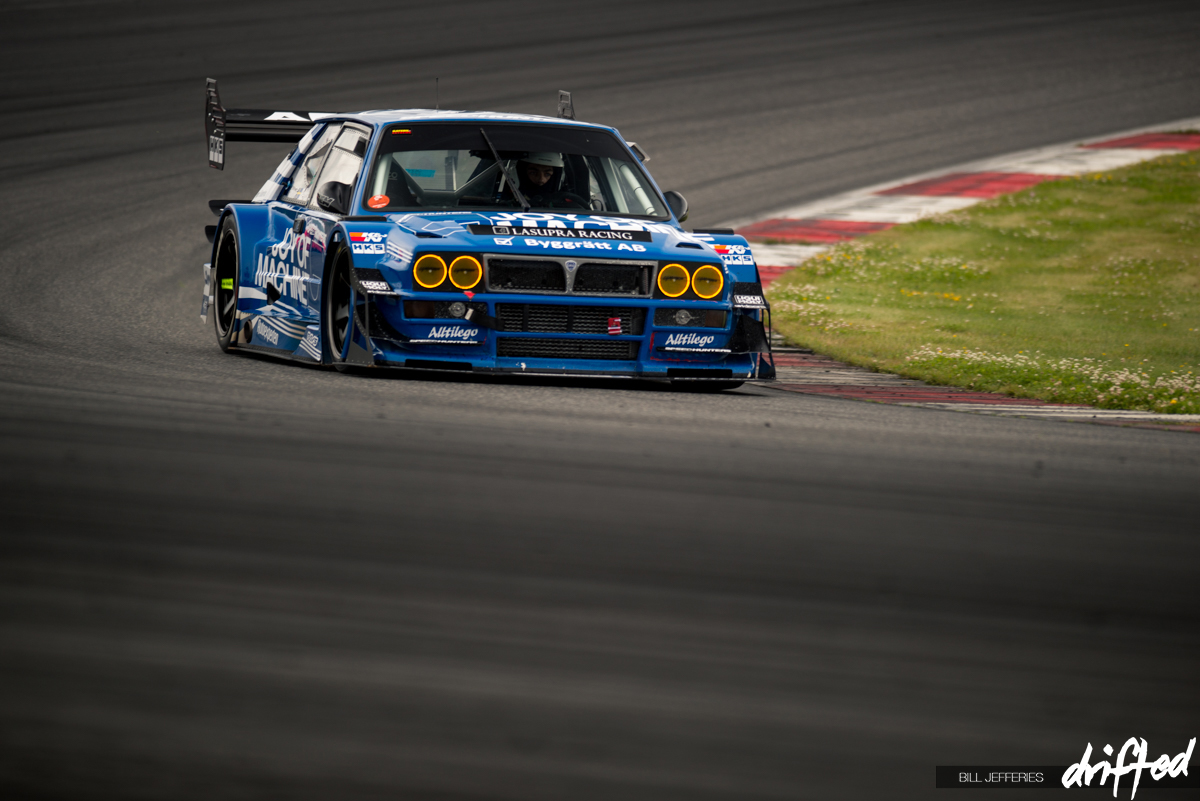 Aside from the drift and the open classes there was also Extreme and Time Attack groups. These would feature just about every car imaginable – I’ve been desperate to shoot the LaSupra since the first time I saw it… 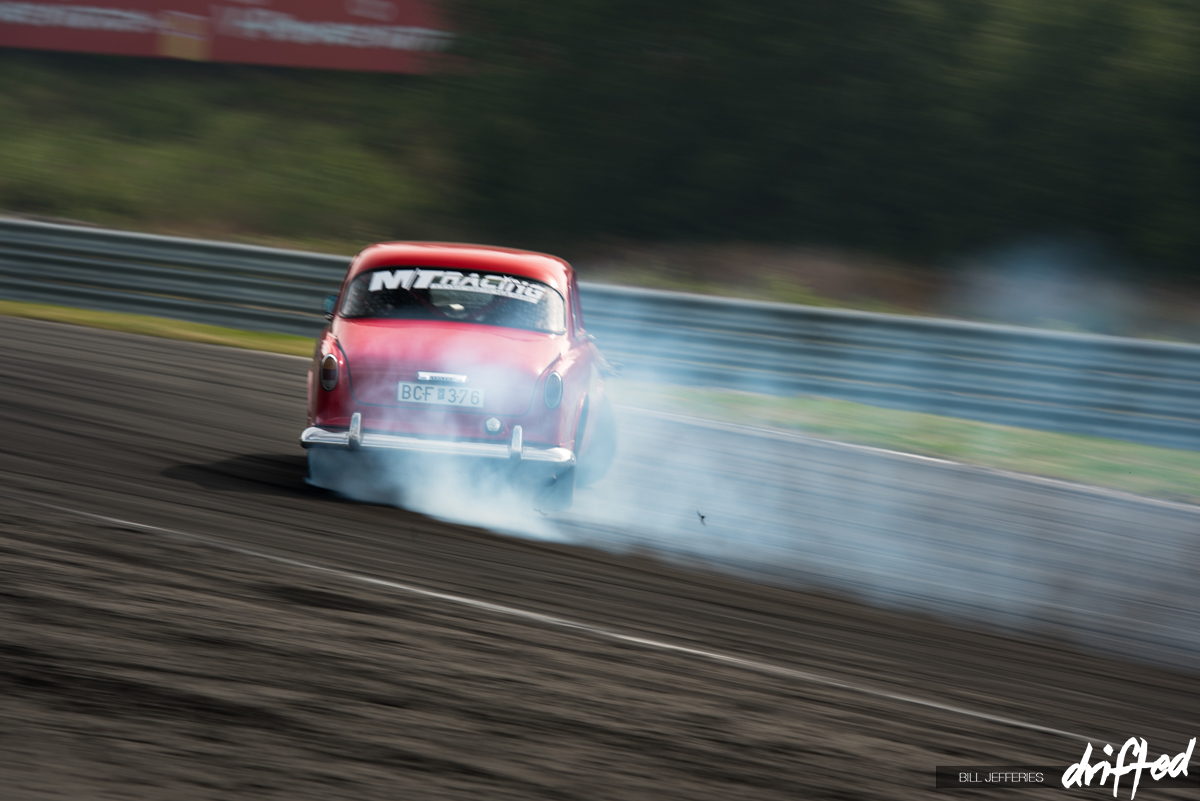 … Through to the Volvo that your great-Grandparents probably drove. That’s just scraping the surface of the insane amounts of variety that was on show out here.

Whenever I travel to a new track, I always try to witness as much of it as I can. Not only did I know that Rudskogen would have some of the most amazing views, but I also wanted to capture the event from as many different locations as I could.

It would mean walking on some of the most brutal surfaces I’ve experienced track-side. There’s no doubt that Rudskogen is a great place for media, but these giant rocks really aren’t too glorious after several hours of lugging heavy equipment around!

As I always find though, the adventure and exploring pays off – before I knew it I was being spoilt with new angles left, right and centre. One thing that the UK lacks at most of its tracks is exciting elements for photographers, such as drastic elevation changes and stunning landscapes. Needless to say, this place certainly has it all – in abundance!

It’s an amazing feeling to be walking for hours, and no matter where you are on the track you can guarantee that it’s only a matter of time before someone passes you with decimated tyres and a huge grin on their faces as they head back to the pits.

After a long day, there’s no better way to downwind than to finally venture away from the track-side rocks and kick back and enjoy the party which was starting to form behind the scenes. This was where Monster Energy’s Luke Woodham was keen to prove that he is seemingly the master of beer pong!

As the beer continued to flow, it was time to experience the ‘other’ side of Gatebil, the part that isn’t quite as published, but the part that is just as much, if not more spoke about behind-the-scenes than the track action which goes on throughout the day. 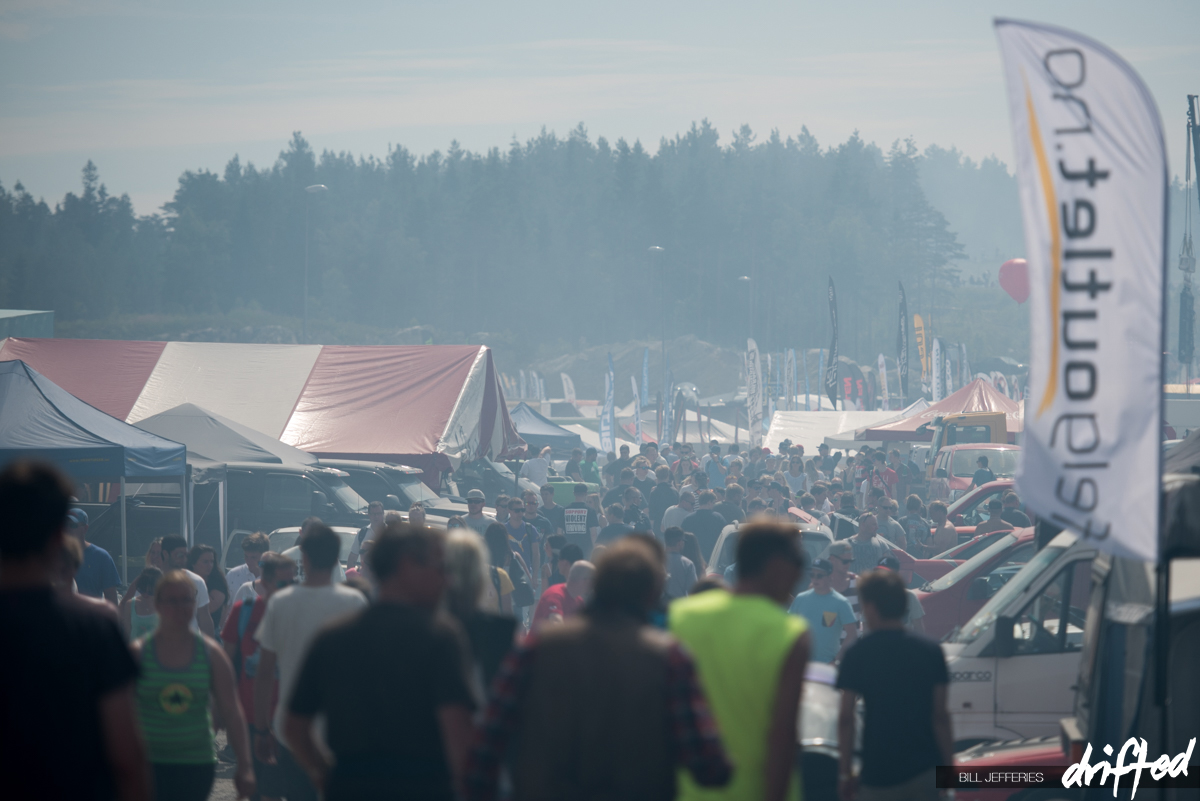 I’d travelled out with a bunch of like-minded friends, sadly I left most of them in search of comfort and convenient storing/charging points for my gear in a hotel. I was told that there was no way I could leave without having witnessing what happens at night-time out here, so what better way to start it off than by heading to the campsite?

I’ve visited many music festivals before, I assumed that this would be no-where near the scale of these, but I was soon to be proven wrong. After another long walk through stunning countryside, I’d join the rest of the crew enjoying their spot at Camp 1 – considering this was just one of the several camps on site, I couldn’t believe the scale of it.

Upon arriving with a camera, it was clear that these guys were keen for me to capture this side of the action! I finally felt like I was experiencing the true spirit of Gatebil. People would head over to you wanting to chat about just about anything, unsurprisingly the usual topic of conversation would be cars (if they weren’t too drunk to understand!) 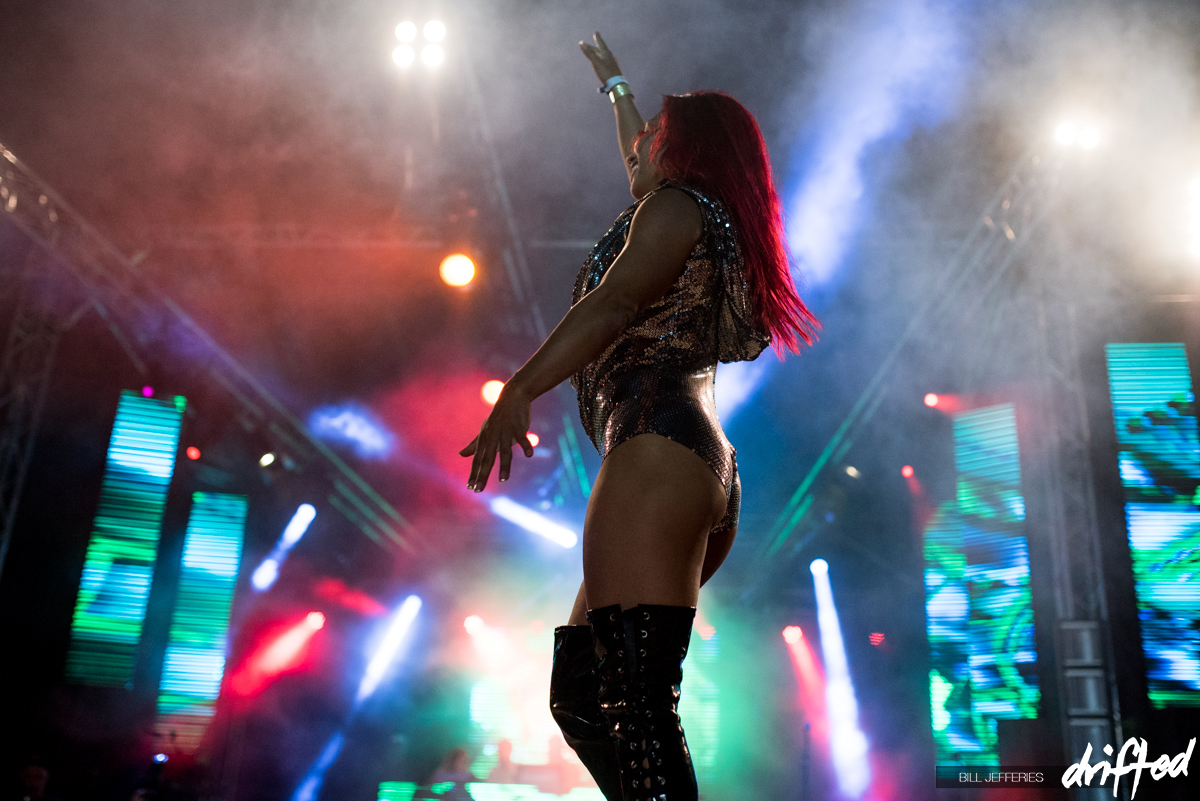 After spending several hours enjoying the party atmosphere, I was informed that it hadn’t even begun. With the campsite clearing it was obvious that everyone had headed to the Aftertrack hosted by Monster Energy. Again, how could I pass up the opportunity to see what was going down?

After another long walk, and climbing over several people who’d probably enjoyed themselves a little too much – I arrived at the stage. Once again I was blown away by the sheer volume of people that had turned out, it was getting to 1am by this point and several thousand people were all crammed together to enjoy the entertainment.

When I say entertainment, I’m not lying either. Monster know how to put on a show, and this one certainly wasn’t going to disappoint! Needless to say, I wasn’t too upset when I realised I’d turned up just in time for the beauty contest.

Once that had finished, the next act would be equally as enjoyable, it’d probably make your wives and girlfriends shake their heads, but we left sanity at the entrance gate, remember?!

Bil Baldwin certainly didn’t look like he was too disappointed with the entertainment either – especially since he looked to be treated to a little more action than most others!

After an absolutely amazing evening, it was time to head back to the hotel. I can only repeat what people told me, and that it’s that you NEED to experience this side of Gatebil. It really doesn’t get better than a day of awesome track action followed by a night of sheer craziness.

For those of you who aren’t aware, this is the only competitive part of Gatebil, (besides seeing who can have the most fun out on track!). It consists of one large sweeping corner with various clipping points laid out – the aim of the game is to be the most impressive tyre-slayer whilst hitting the clipping points to wow both the crowd and the judges.

There certainly wasn’t a shortage of fans who had turned out to voice their opinions either!

As the weekend came to a close, it was time to remember some of the more awesome moments, alongside the cars driving that made it worthwhile travelling for hours to come and experience.

Nothing can prepare you for the madness of Gatebil, nor can it be summarised in a single visit. There were highs.

And lows (sorry!) for the drivers throughout the weekend.

I said to myself that I’d visit one day, and I’m already making sure that it once again sits proudly in my calendar for 2016.

Gatebil really is an event like no other, for such an incredible amount of reasons! 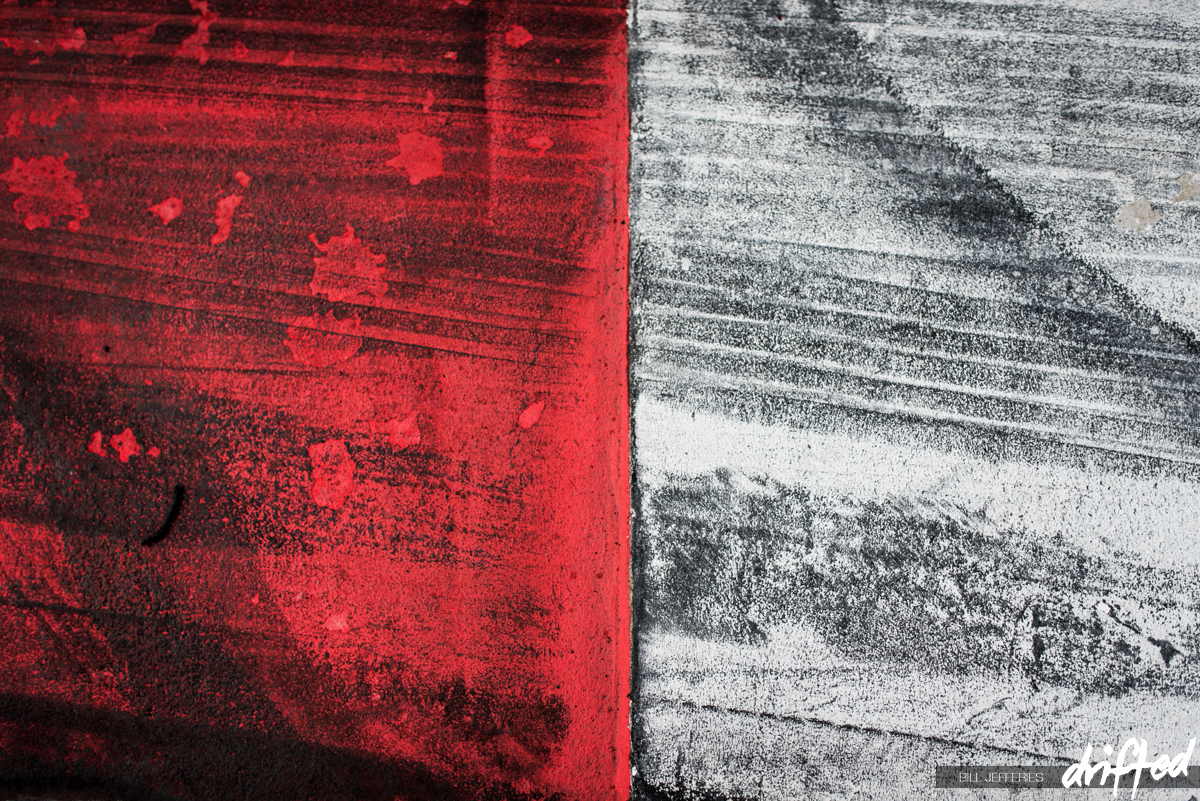 As the tyre slaying comes to a sad end, and the journey home begins. 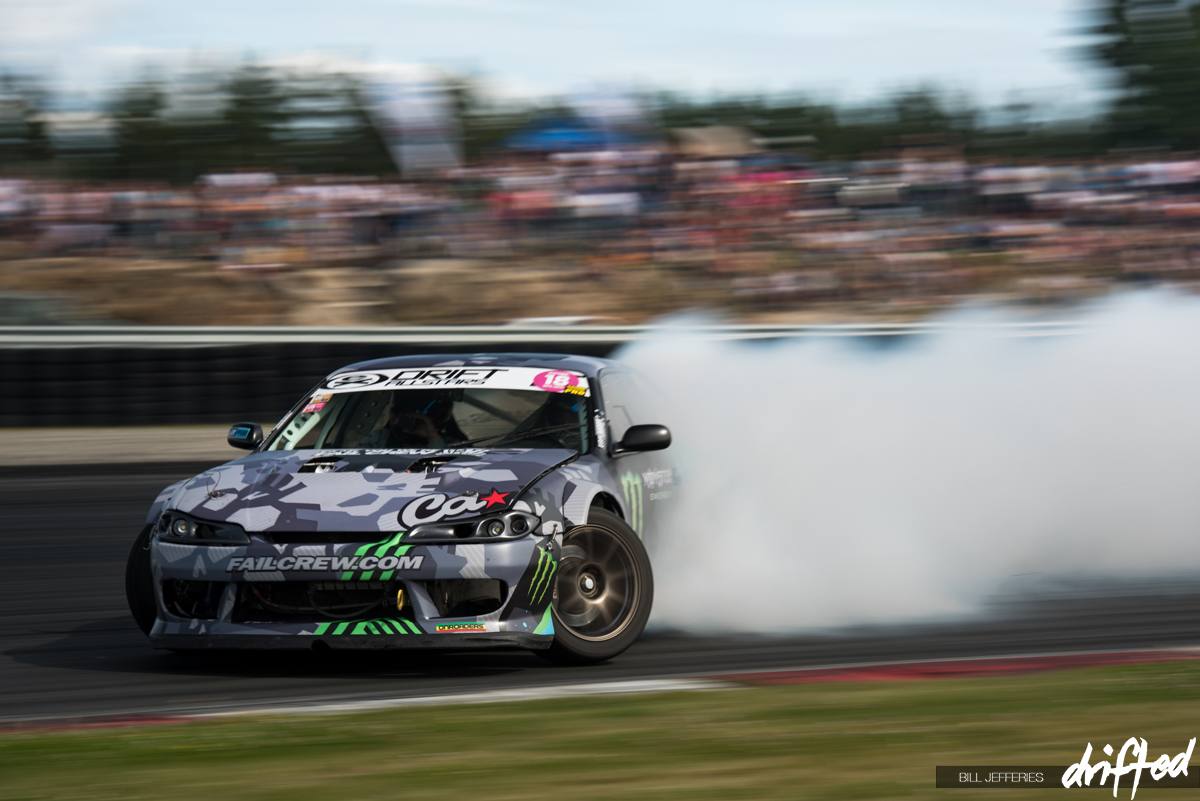 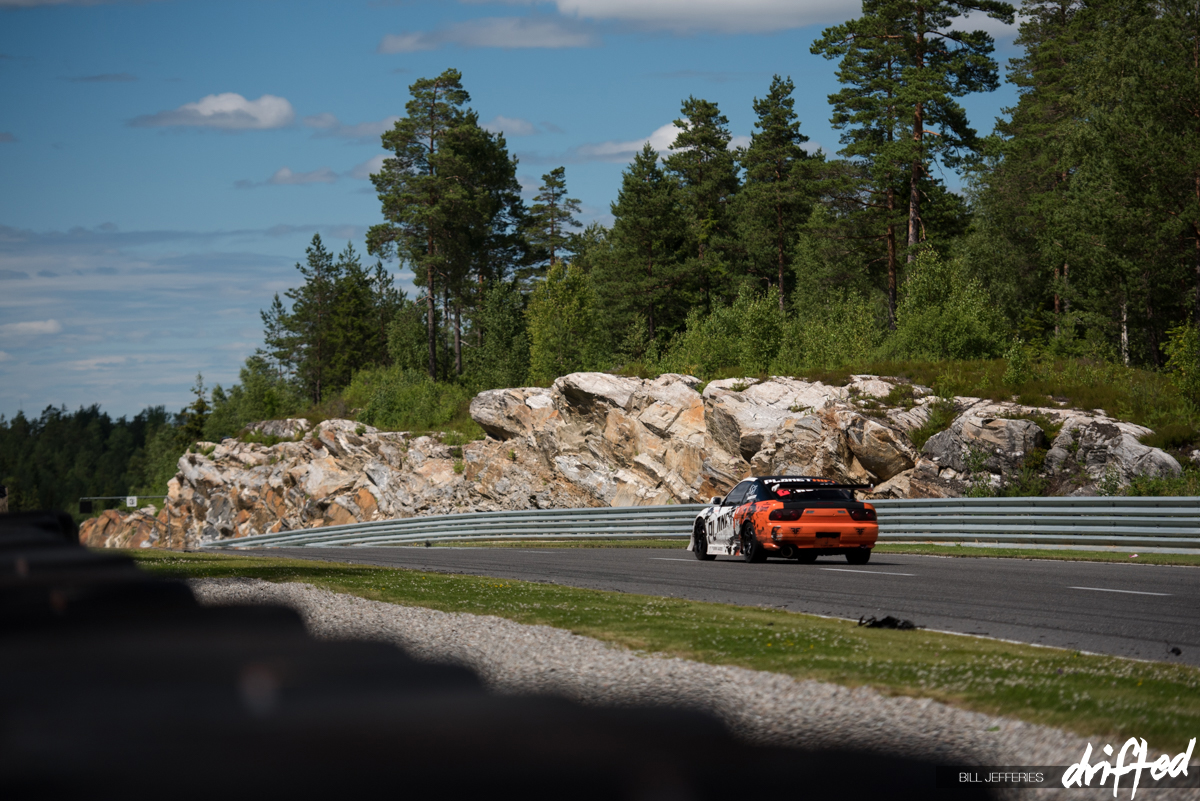 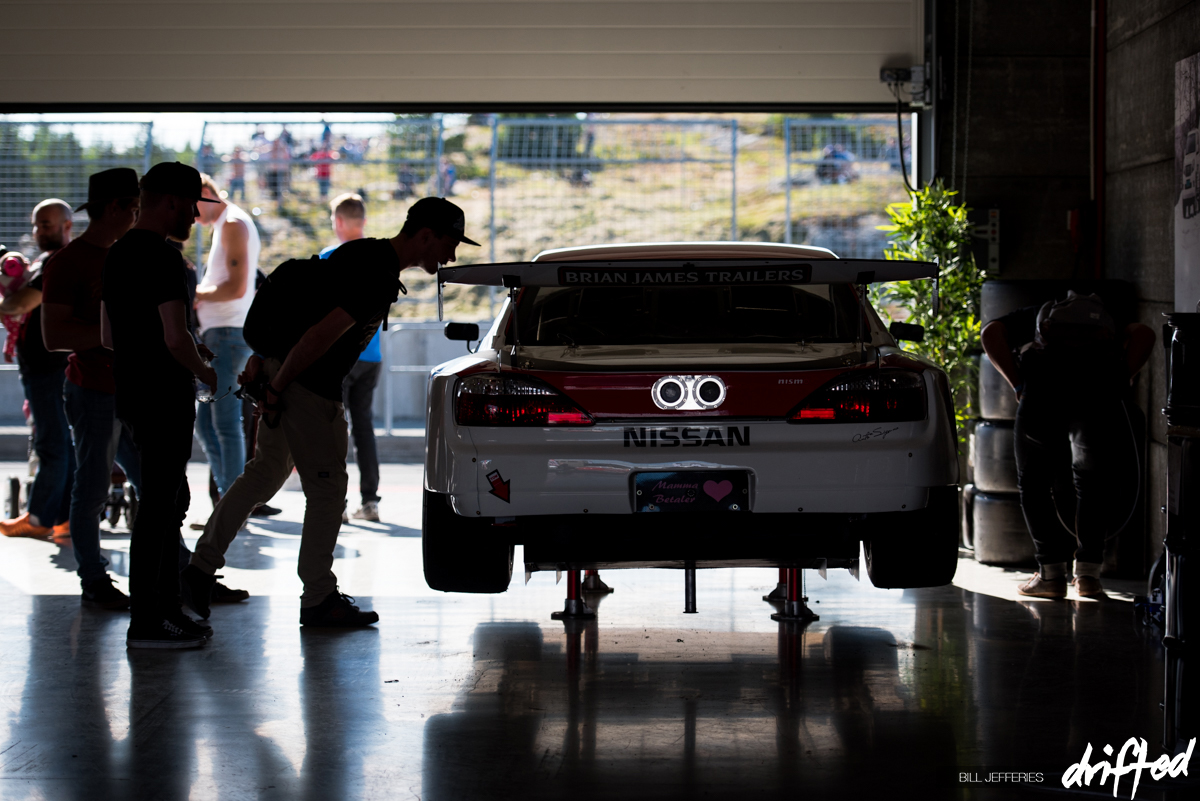 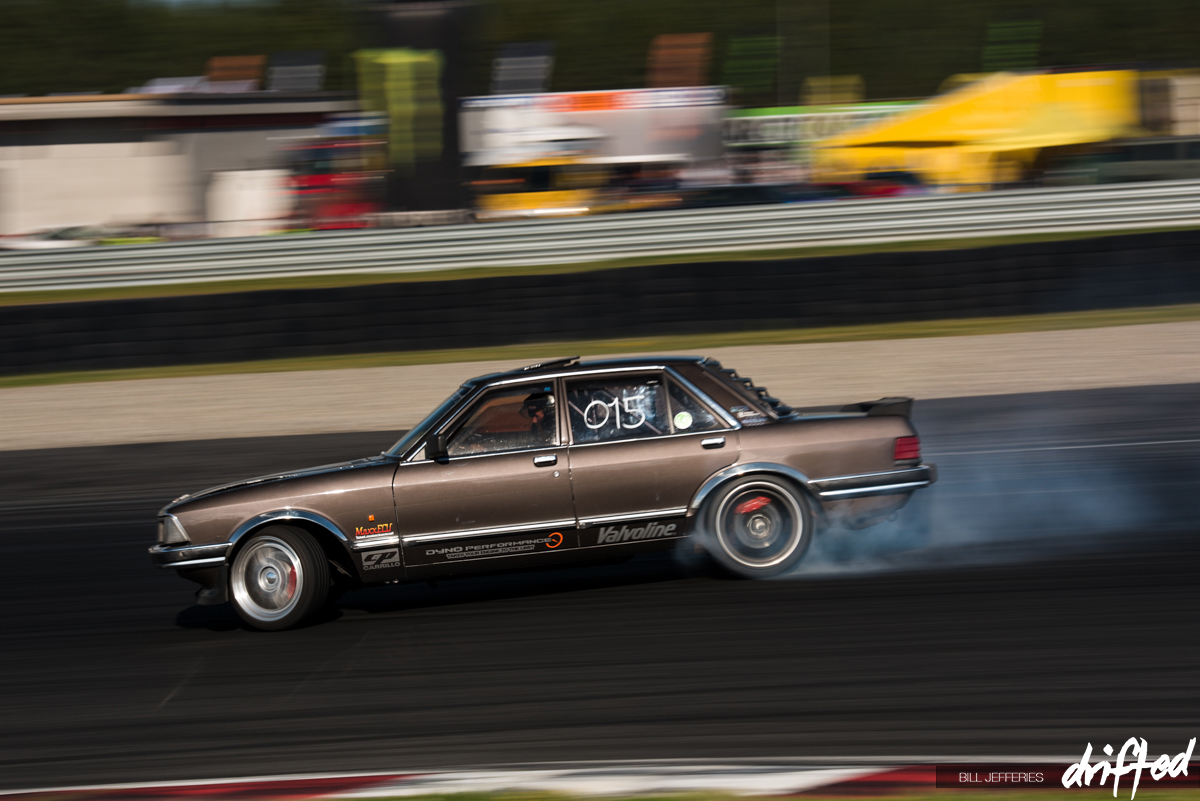 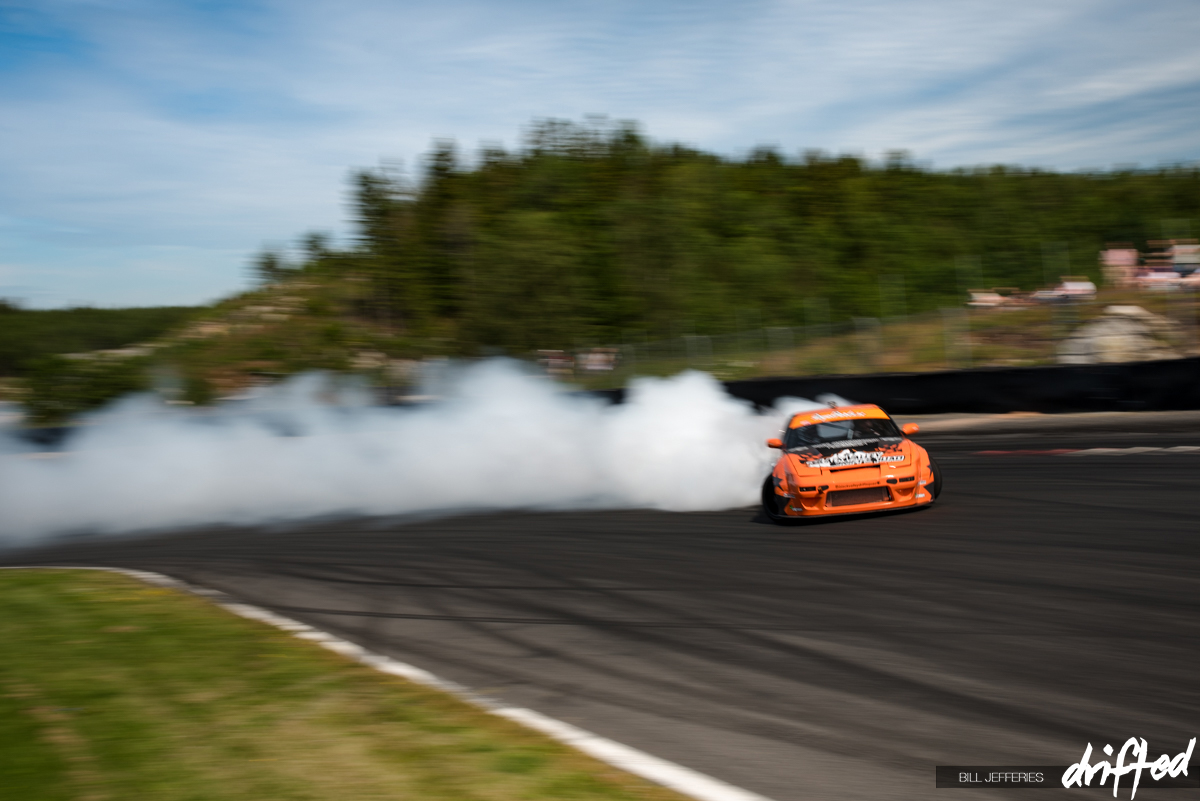 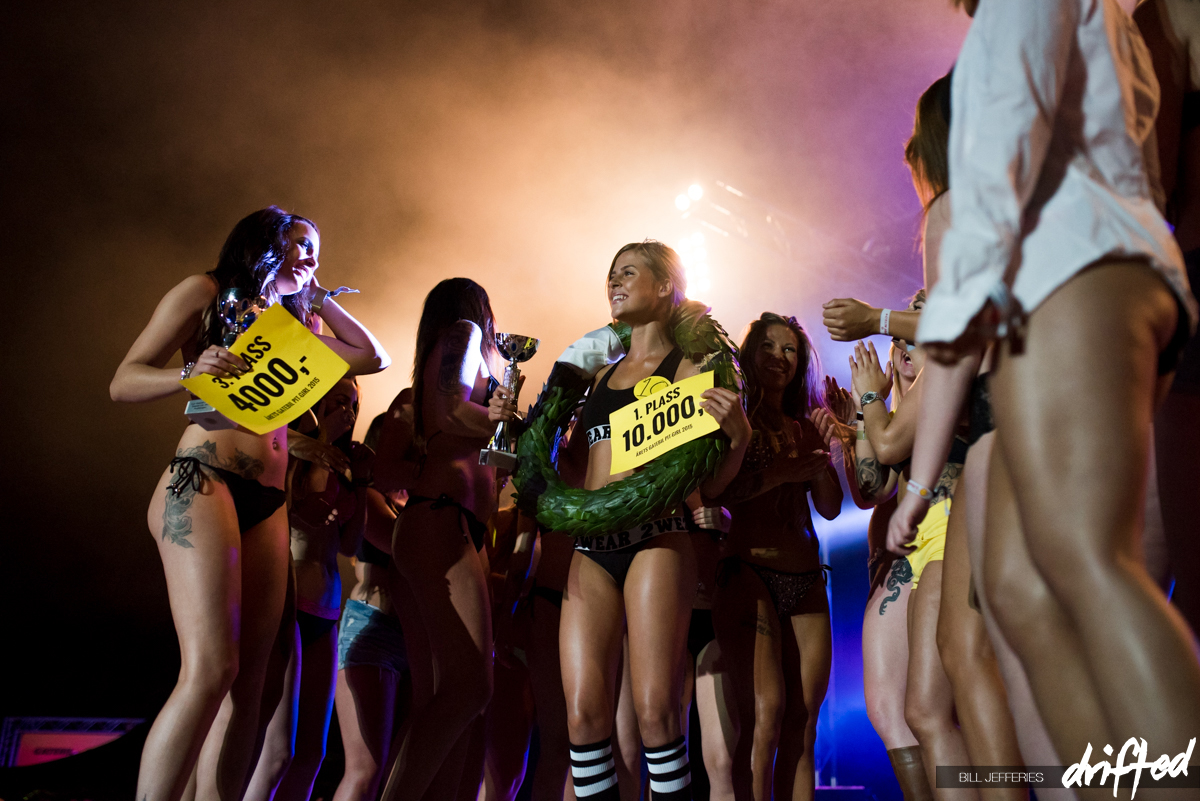 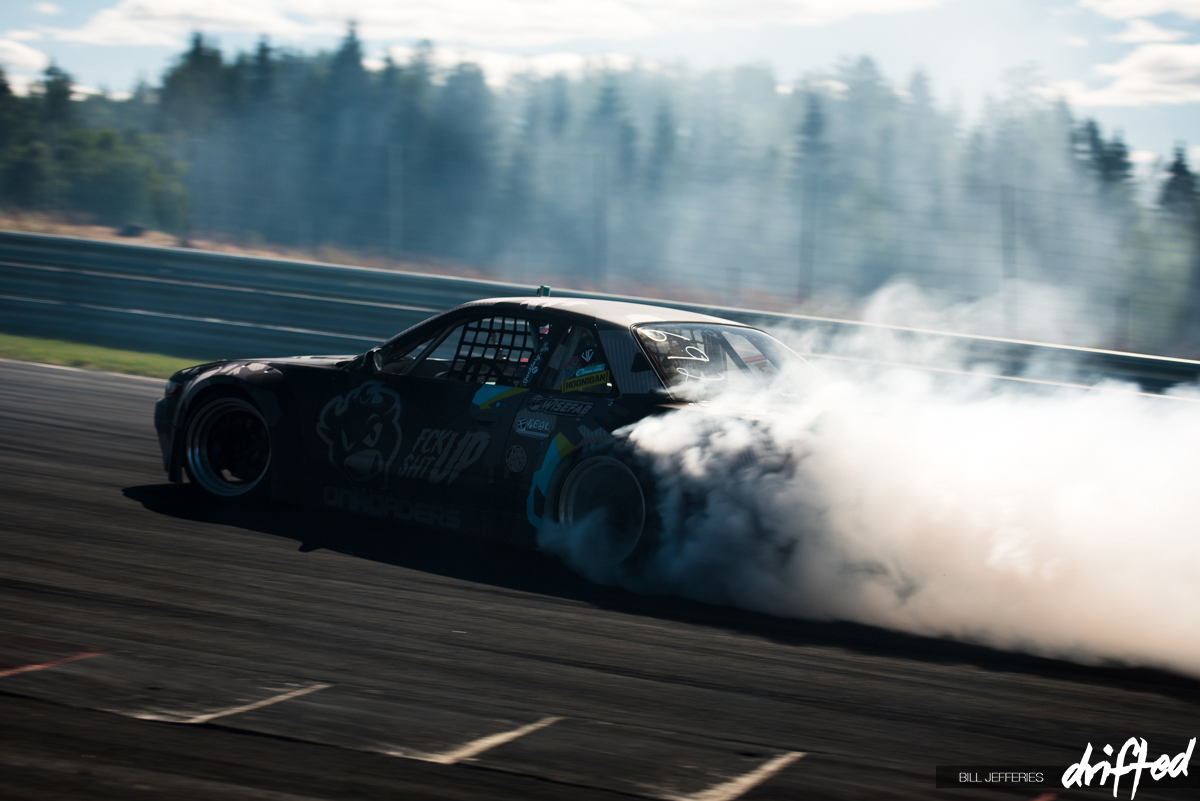