Global Warfare, Round 3 of the Irish Drift Championship, the Pièce De Résistance of the drift season on the Emerald Isle. Throves of International drivers coupled with a one off custom built spectator orientated track within the compounds of Mondello Park. 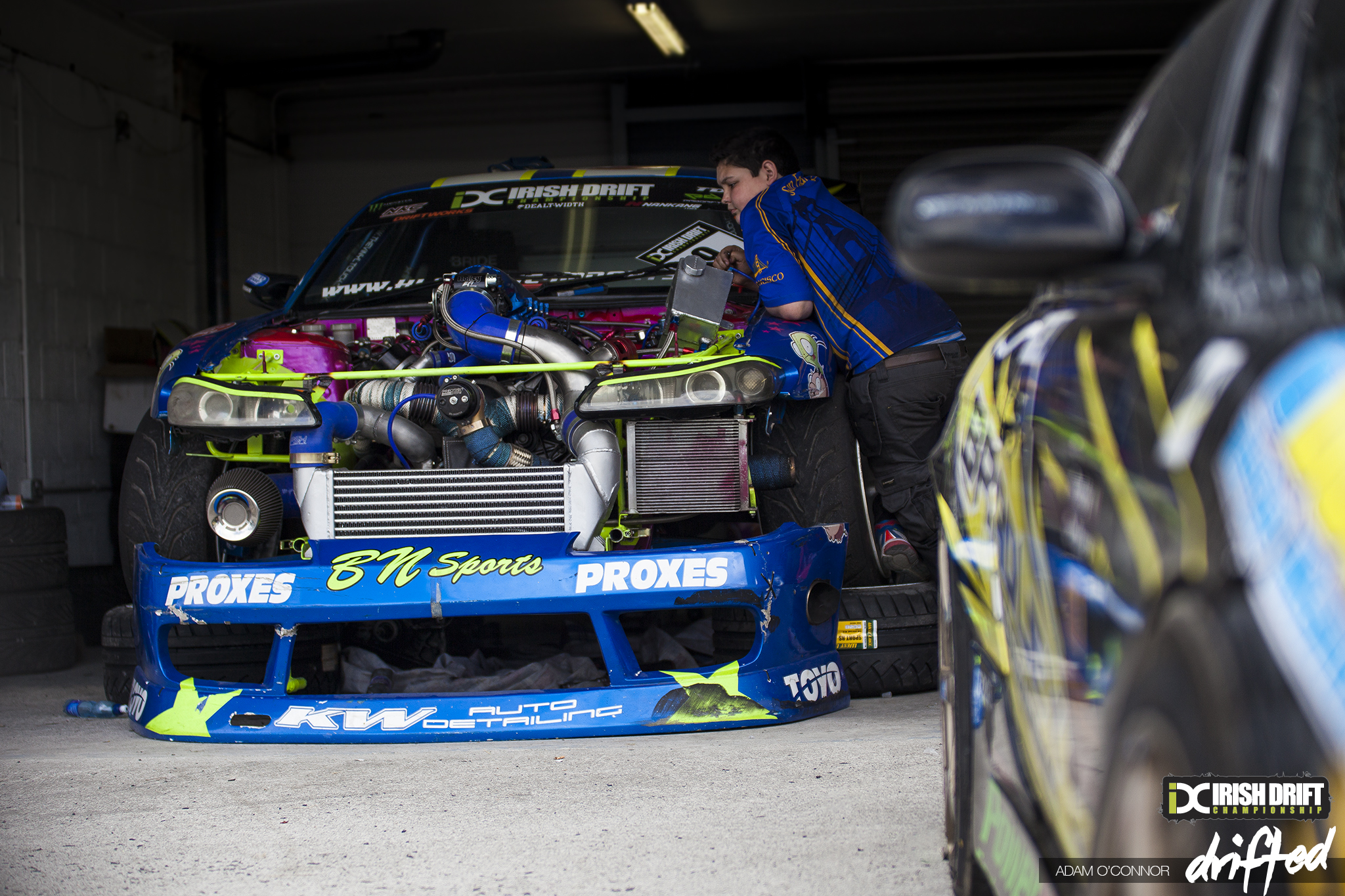 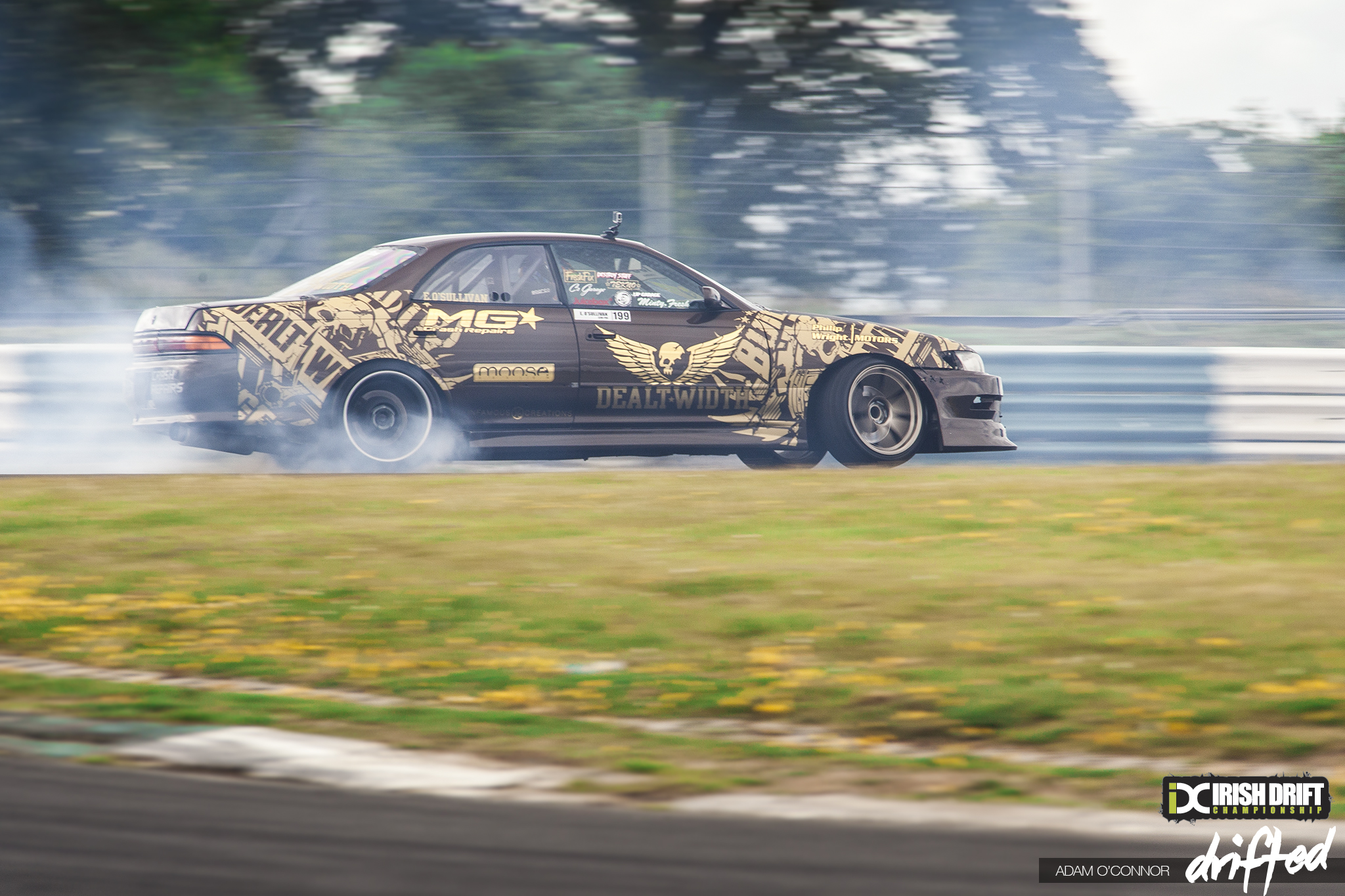 Since its conception, 11 years ago, many podiums have come and gone, many champions have rose and fallen, but the top of the podium has not welcomed the feet of an international competitor, yet. 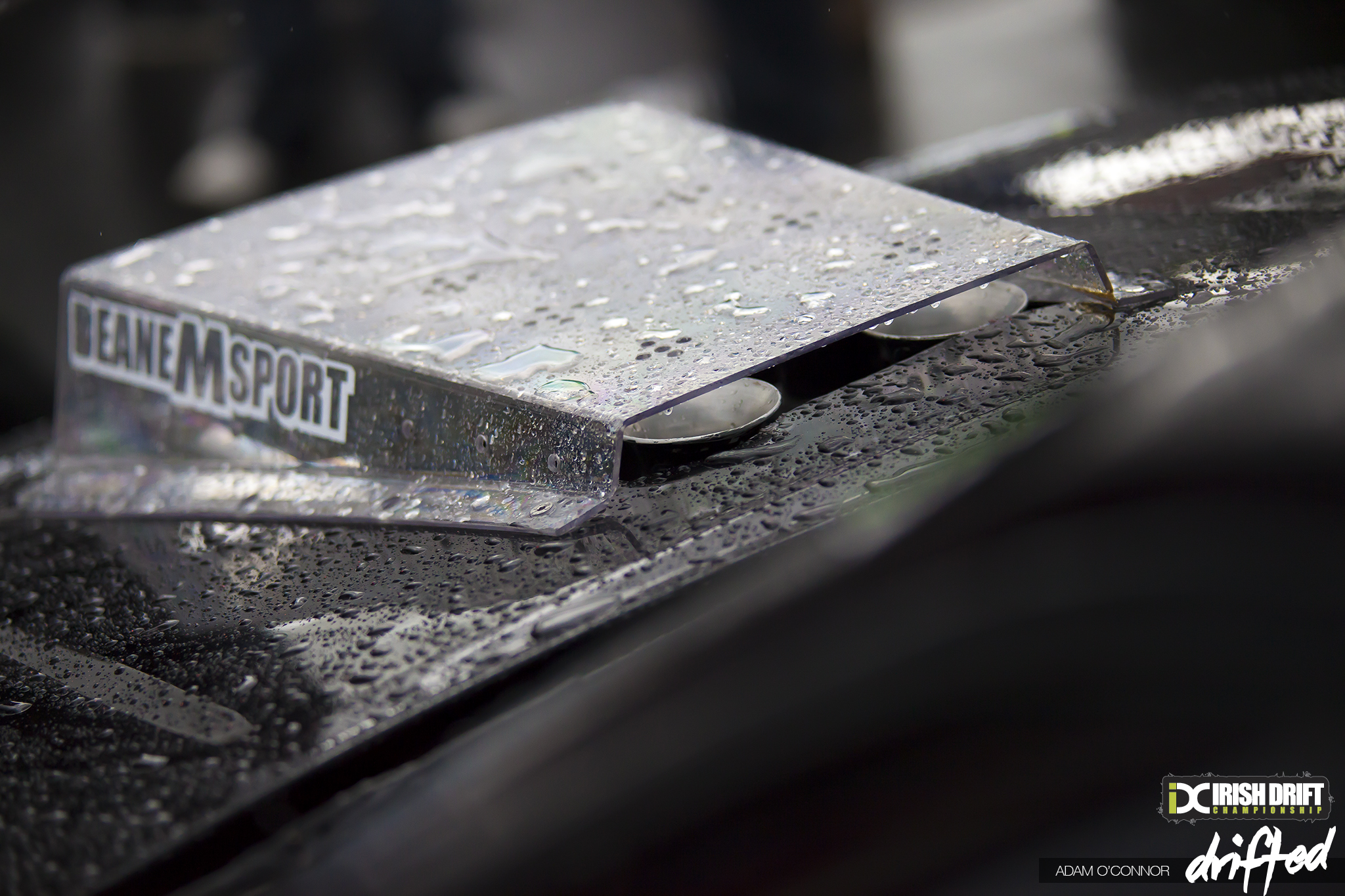 And with the talisman of Irish drifting, James Deane, unable to compete as he was defending his Drift Allstars Championship in Sweden. One man was hell-bent on taking top spot. 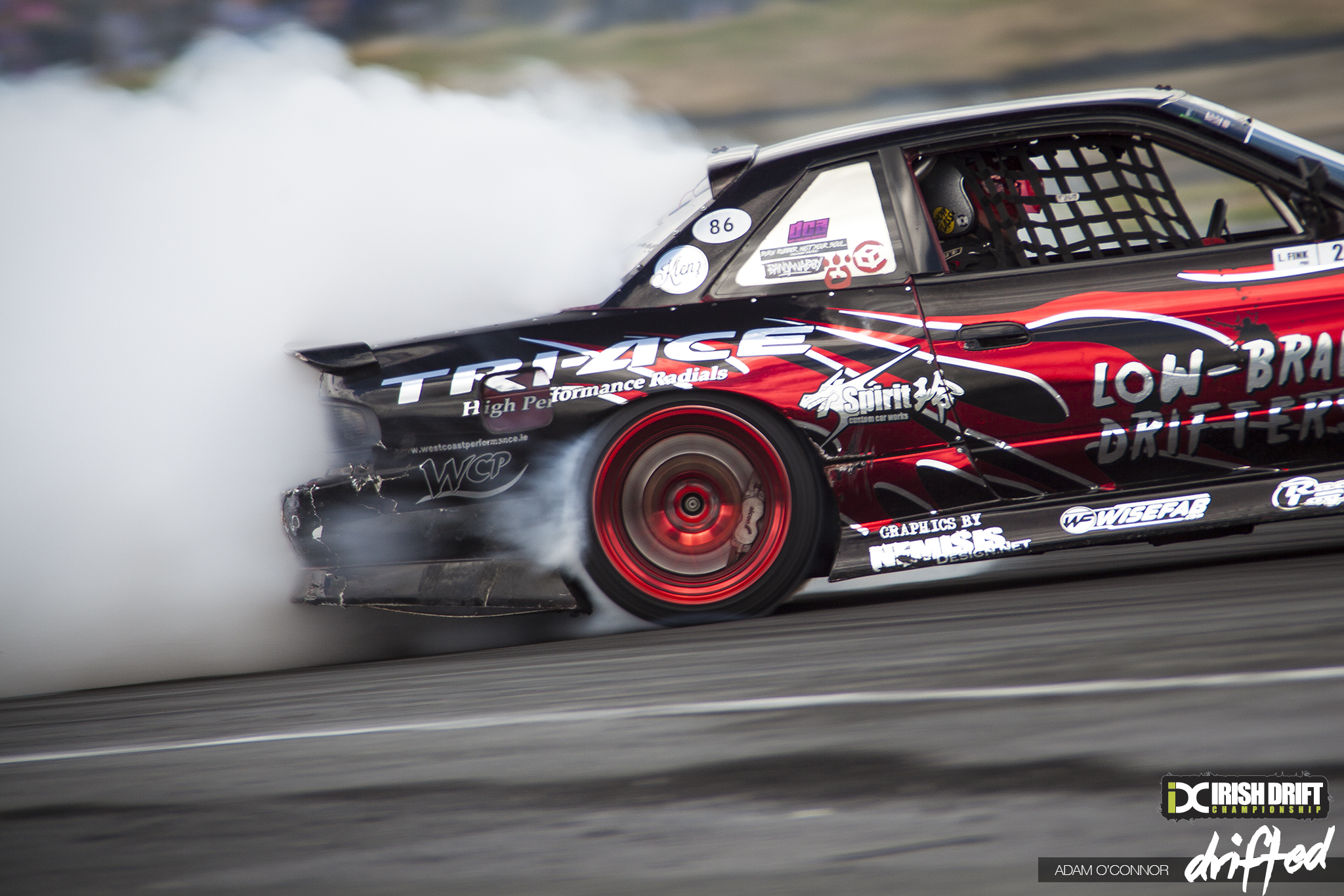 Luke Fink has blazed a trail through Ireland and Europe in the Low Brain Drifters PS13 since arriving on the continent earlier this year. Fink plays the game perfectly on and off the track, talking thrash and backing it up, all in the name of good fun with the other drivers on the grid. 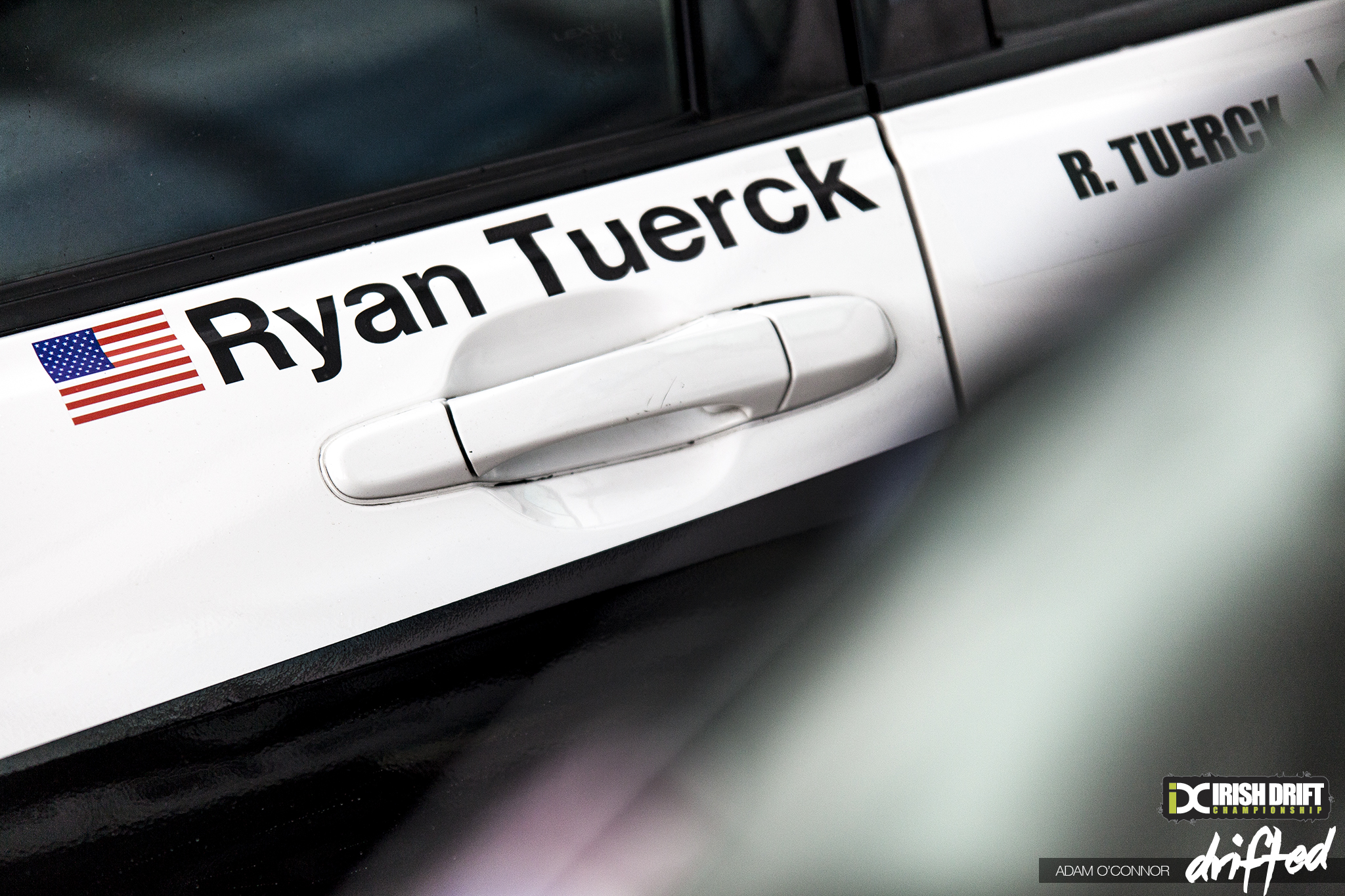 Current Formula D points leader, Ryan Tuerck partnered up with Team Japspeed again for the weekend but would struggle to get to grips in the RHD 2JZ IS200 in time for the Top 32. 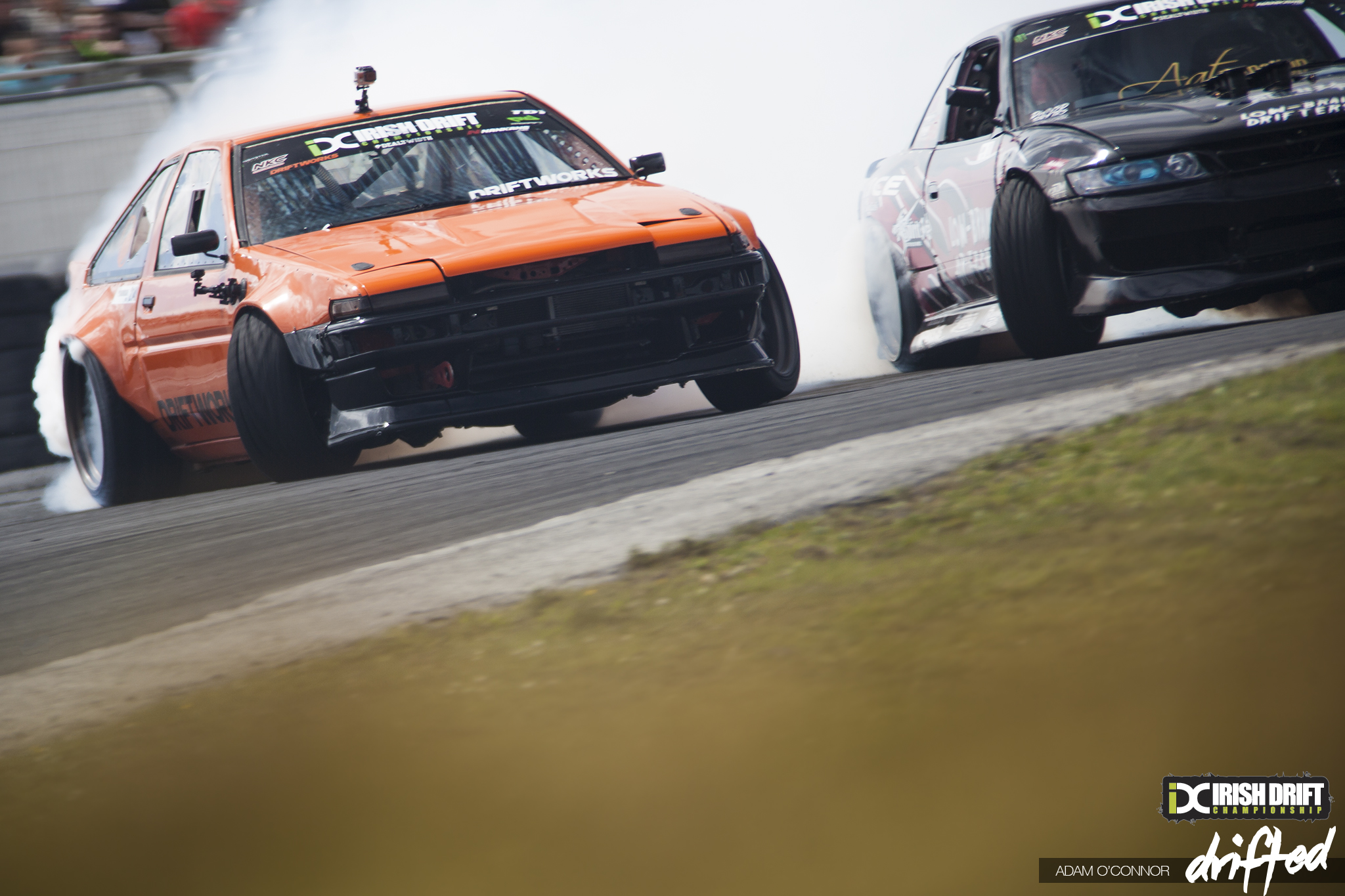 Fan favorite Phil Morrison and the DW86 were back on form after a curb crunching crash at the Birmingham Motor Show, seeing much of the suspension in the ASCAR V8 AE86 being replaced. 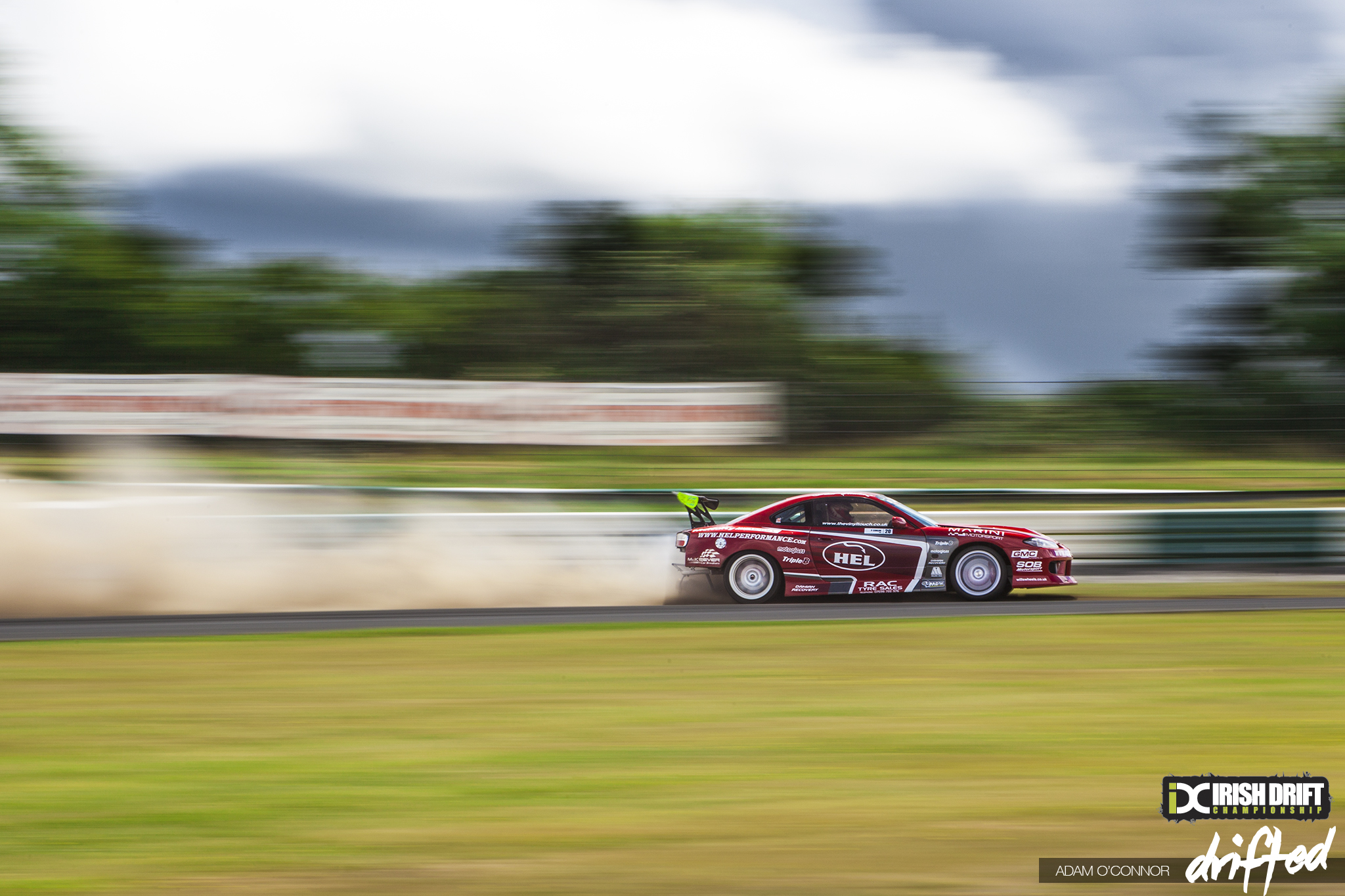 Ever changing weather conditions reeked havoc on the Kildare countryside all weekend. 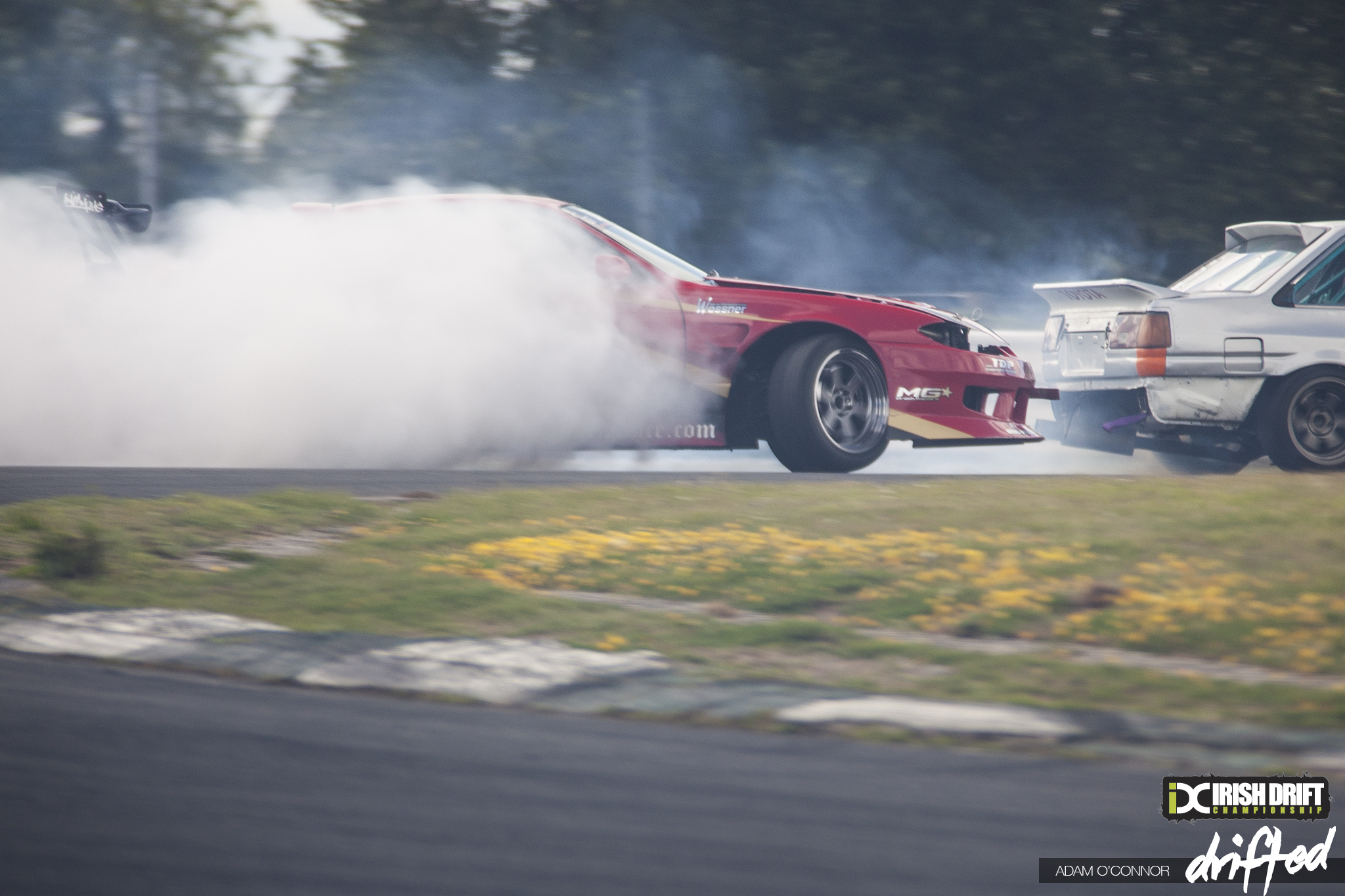 Tire shredding levels of heat in the tarmac would in an instant change to a deluge of flood proportions. 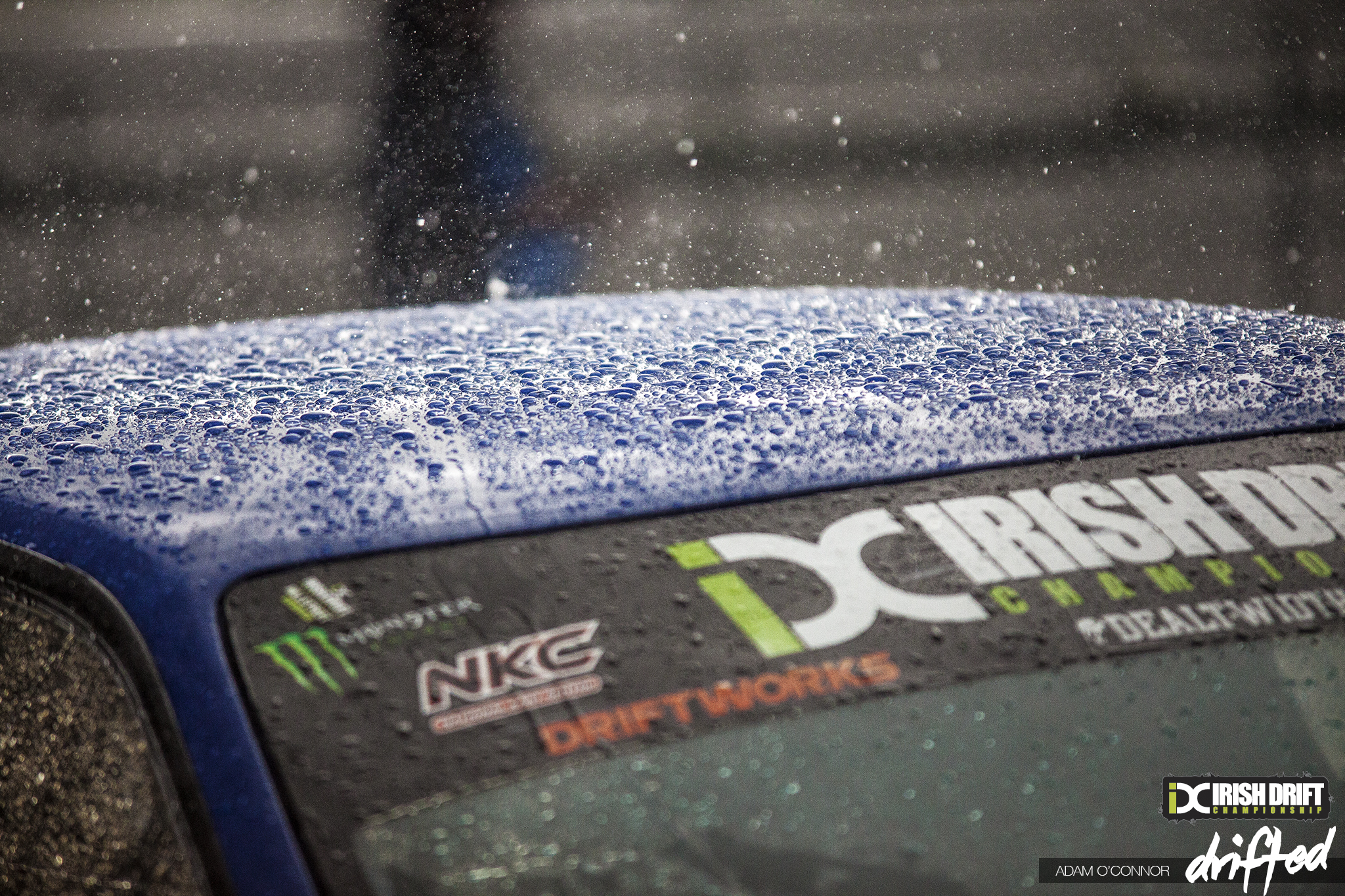 Drivers were scrambling between runs to adjust tire pressure to cope with the patches of traction throughout the course. Spotters played a vital role in assessing where and when the track had hidden grip. 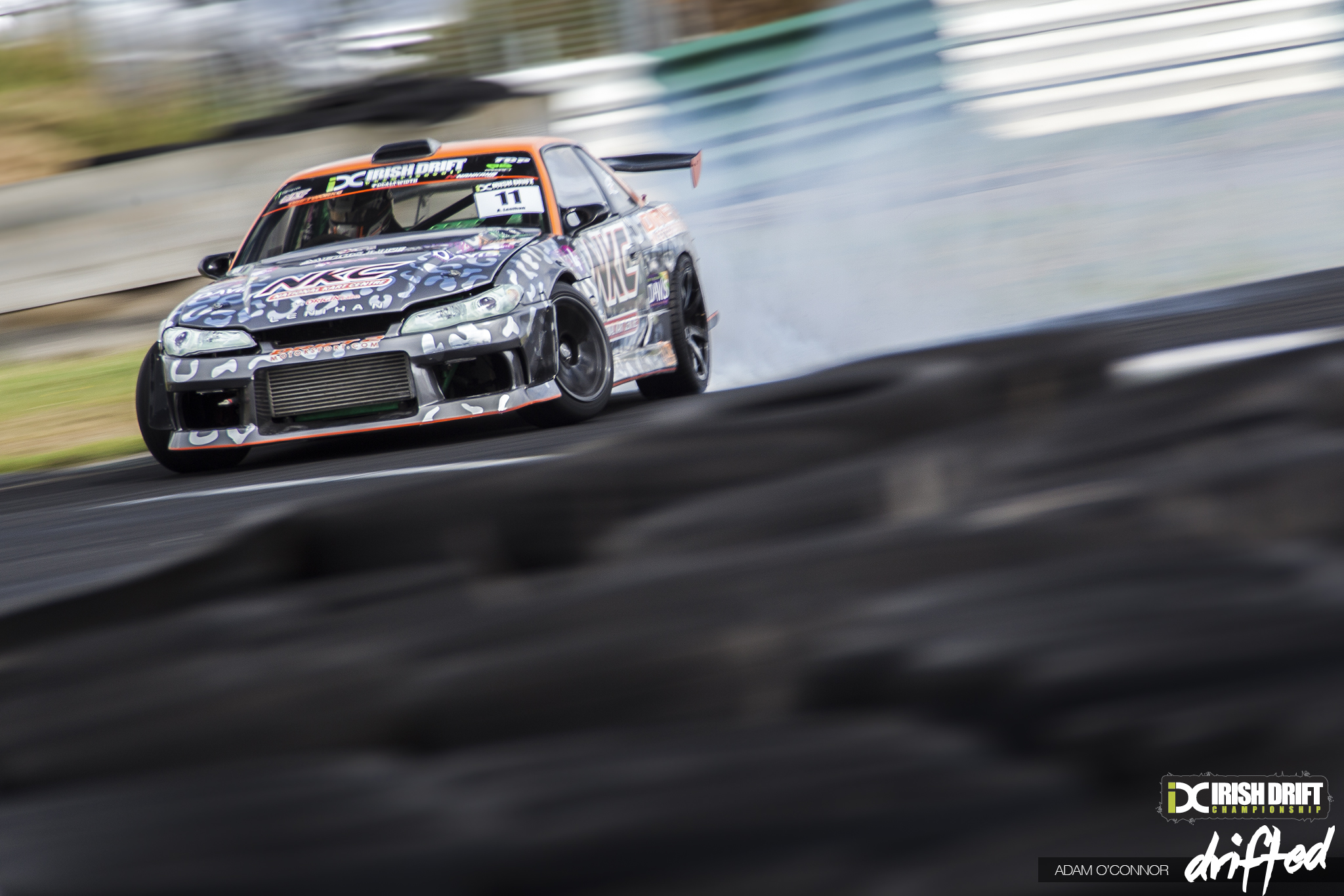 A long, straight run up forced drivers into initiating through clip one. Any driver hesitating to initiate early was brought straight into the talking point of the weekend. 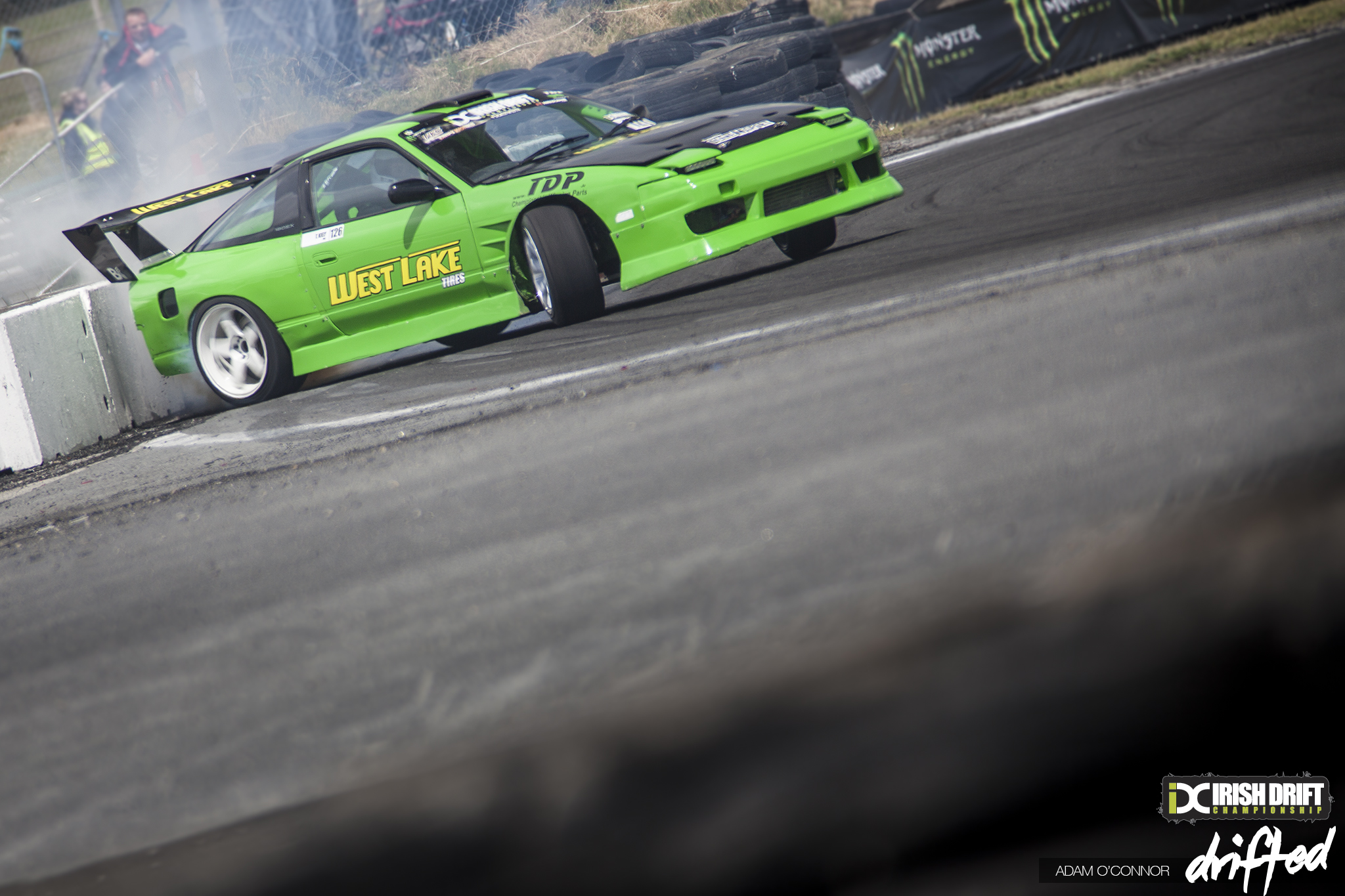 Clip two housed a perpendicular rear clipping point paired with an ominous concrete wall was ready and willing to claim a drivers weekend. Social media was rife on Friday evening, with video of Formula D veteran Robbie Nshida going in after a late initiation, spelling an end to Darren McNamara’s LHD PS13. 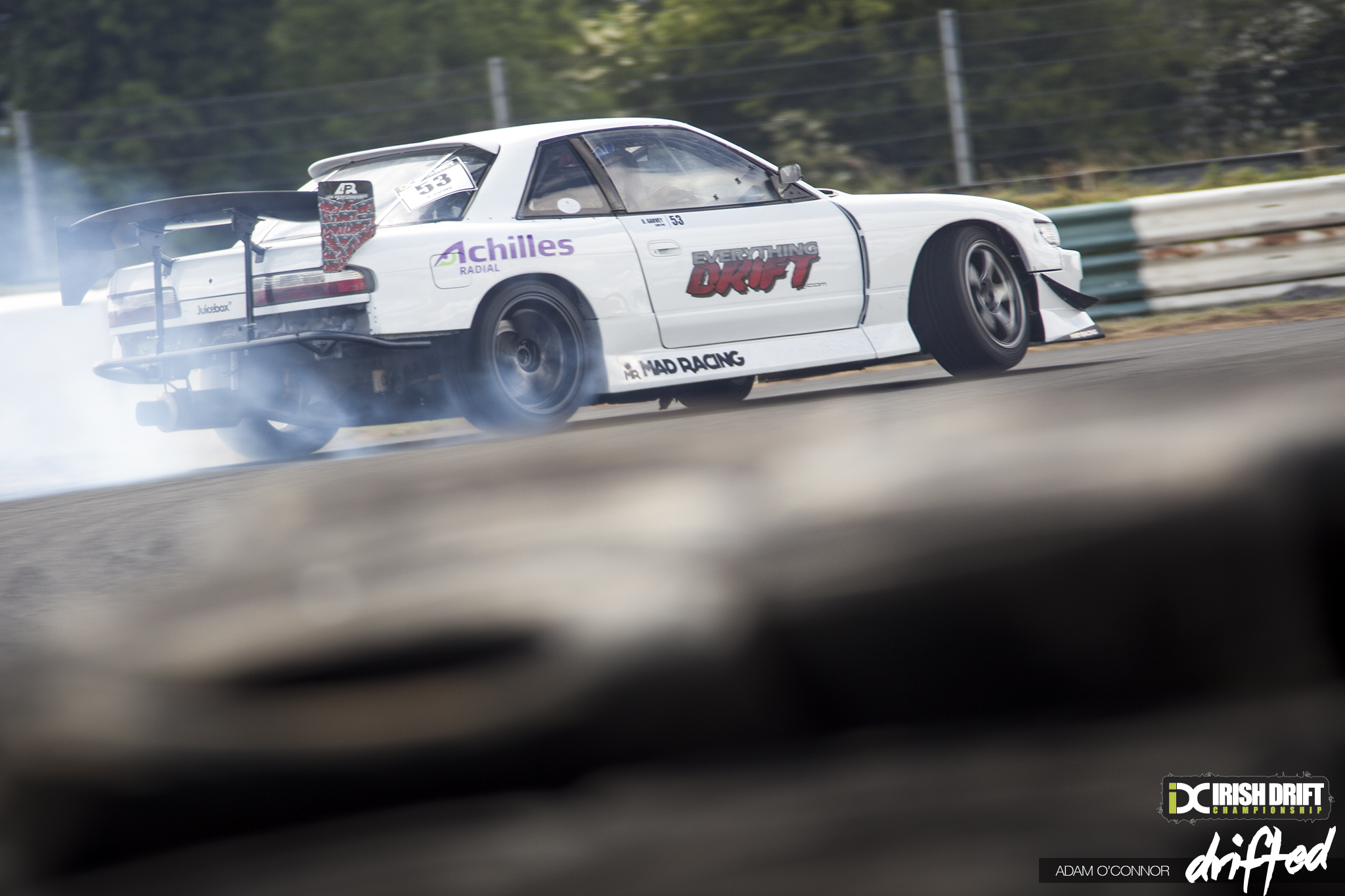 At Round two, Dave Egan made the announcement that Team Achilles would compete in familiar surroundings, with the infamous Daigo Saito and the rest of the team piloting their own machines. Unfortunately delays in shipping meant that the cars would arrive in Ireland three days too late. 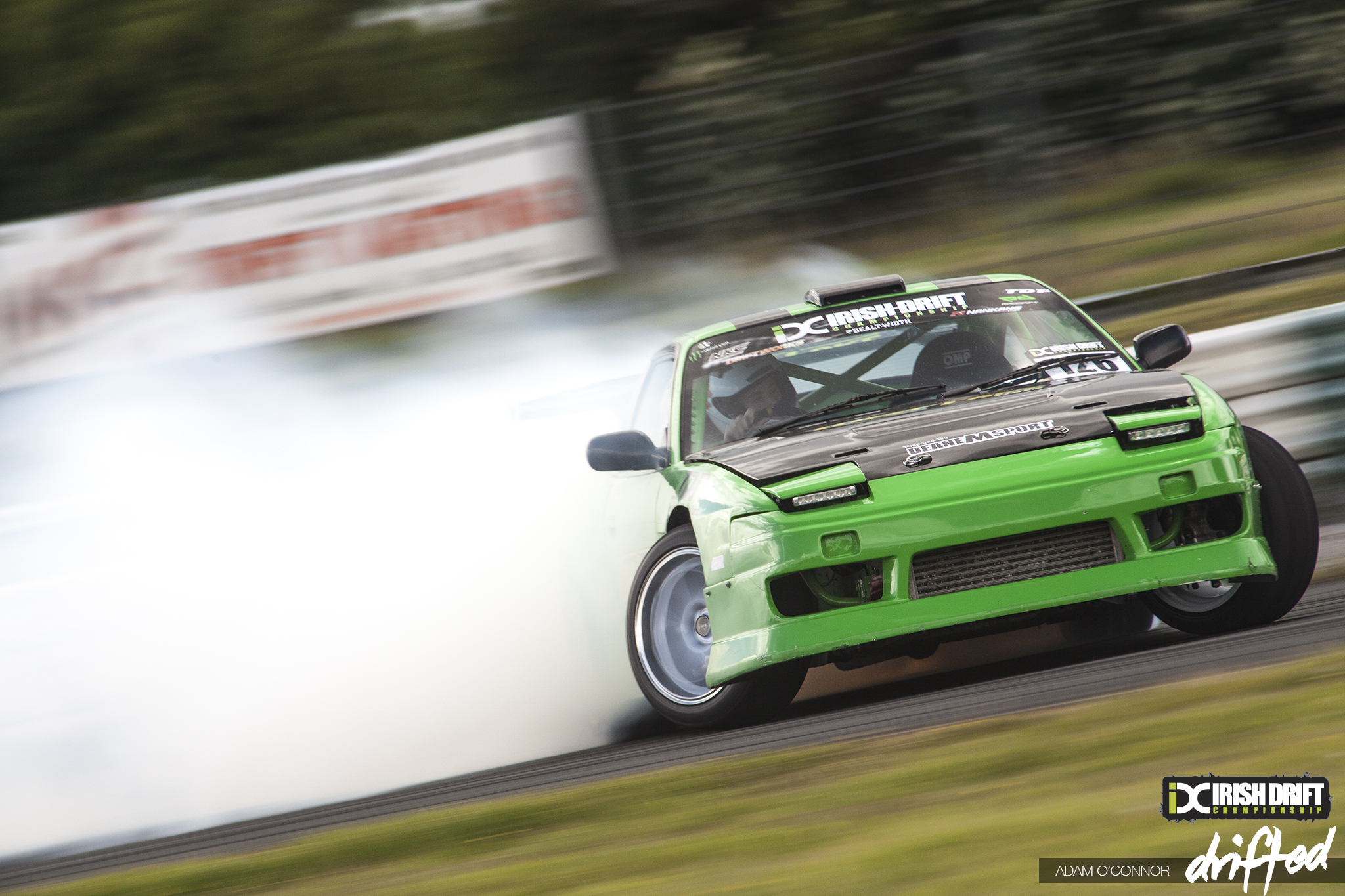 Maths and Geography books during the week, 700hp tire destroying chaos at the weekends. Two future champions of drifting, Tomas Kiely and Jack Shanahan would become upgraded to hero status over the weekend, taking down the biggest names battle by battle. 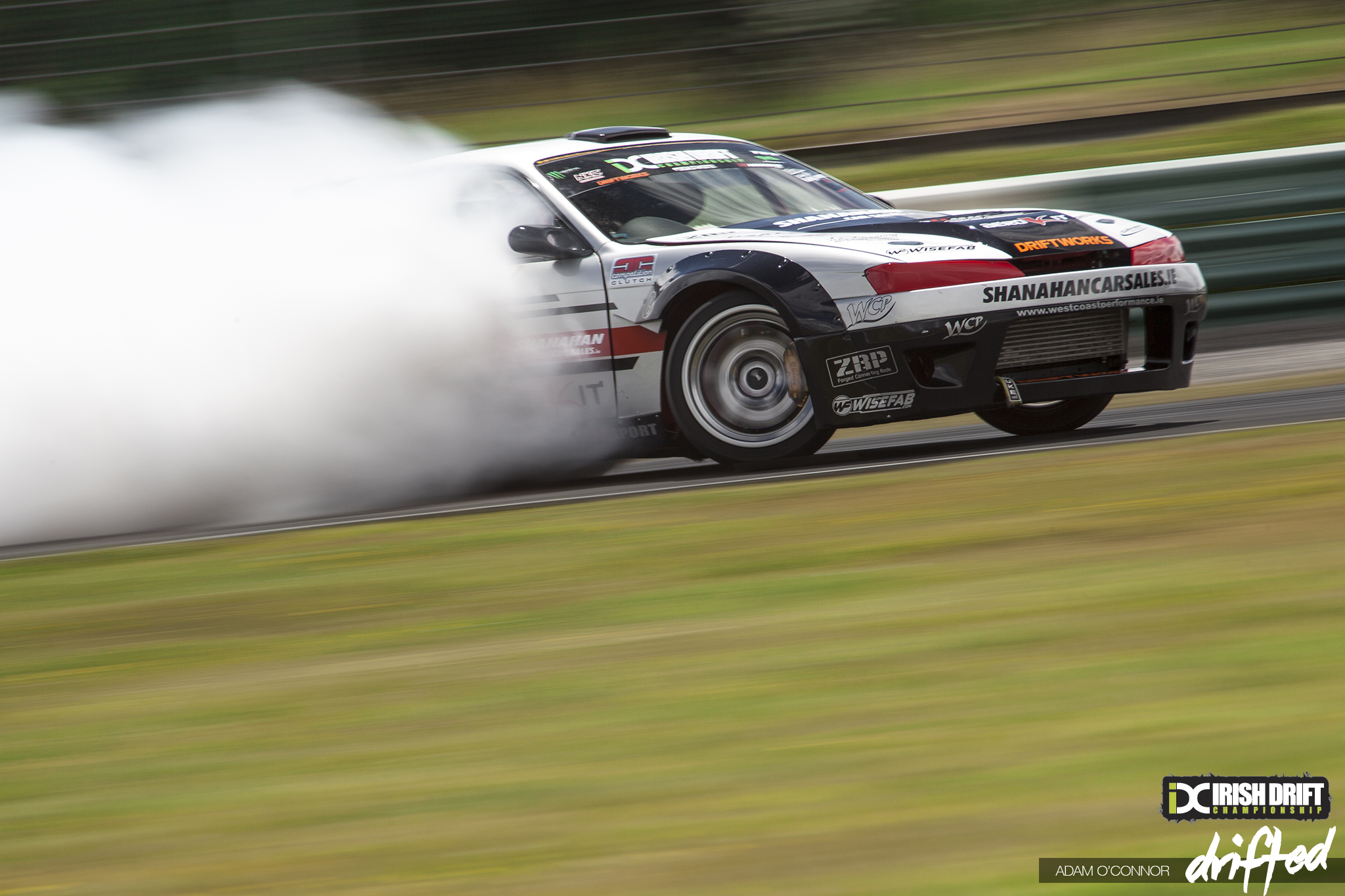 With a combined age of 30, and racing maturity beyond their years, the rise of Jack and Tomas is only beginning. 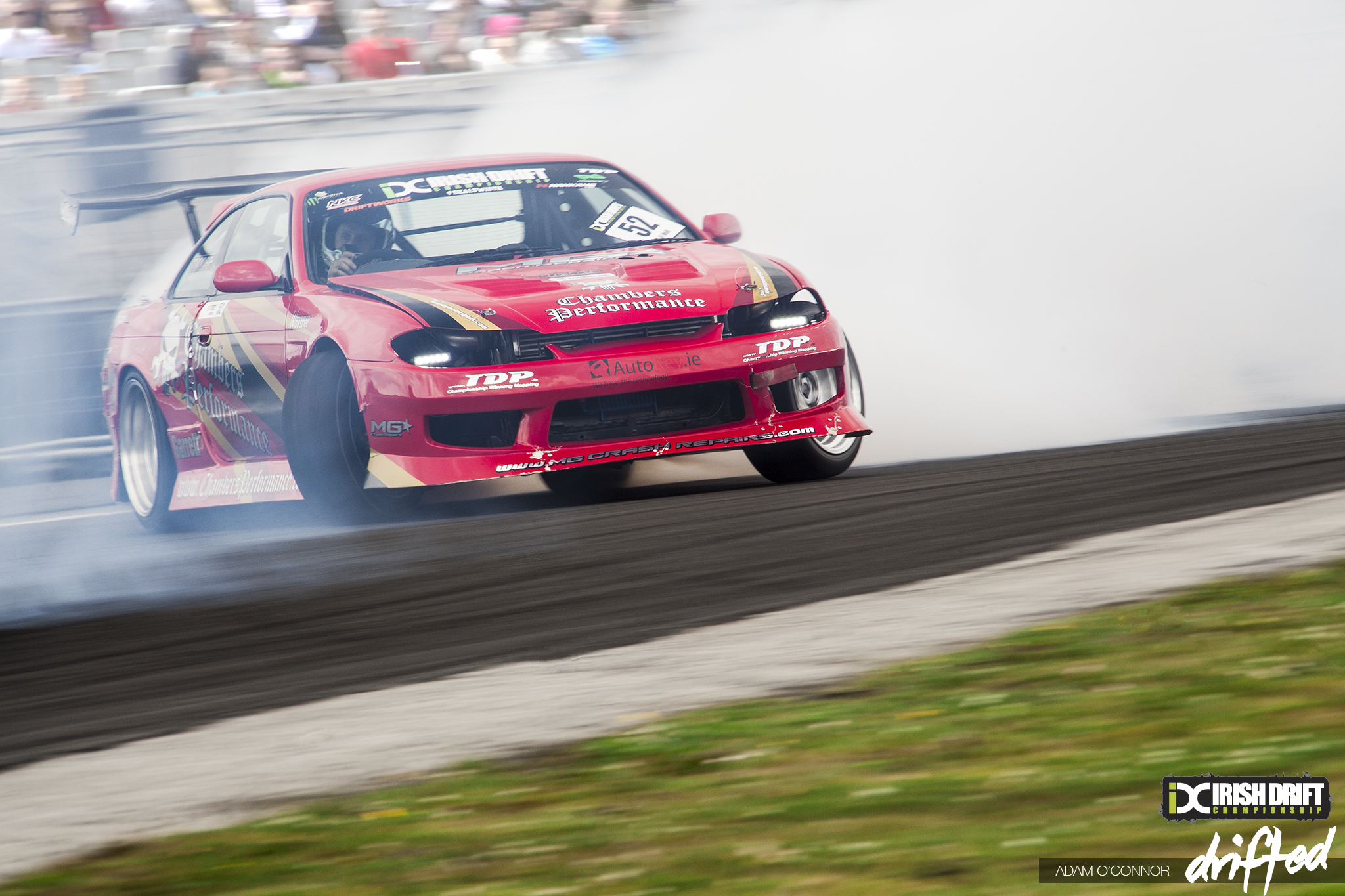 Global Warfare has once again put the spotlight on Irish Drift Championship and its drivers to an audience around the world. 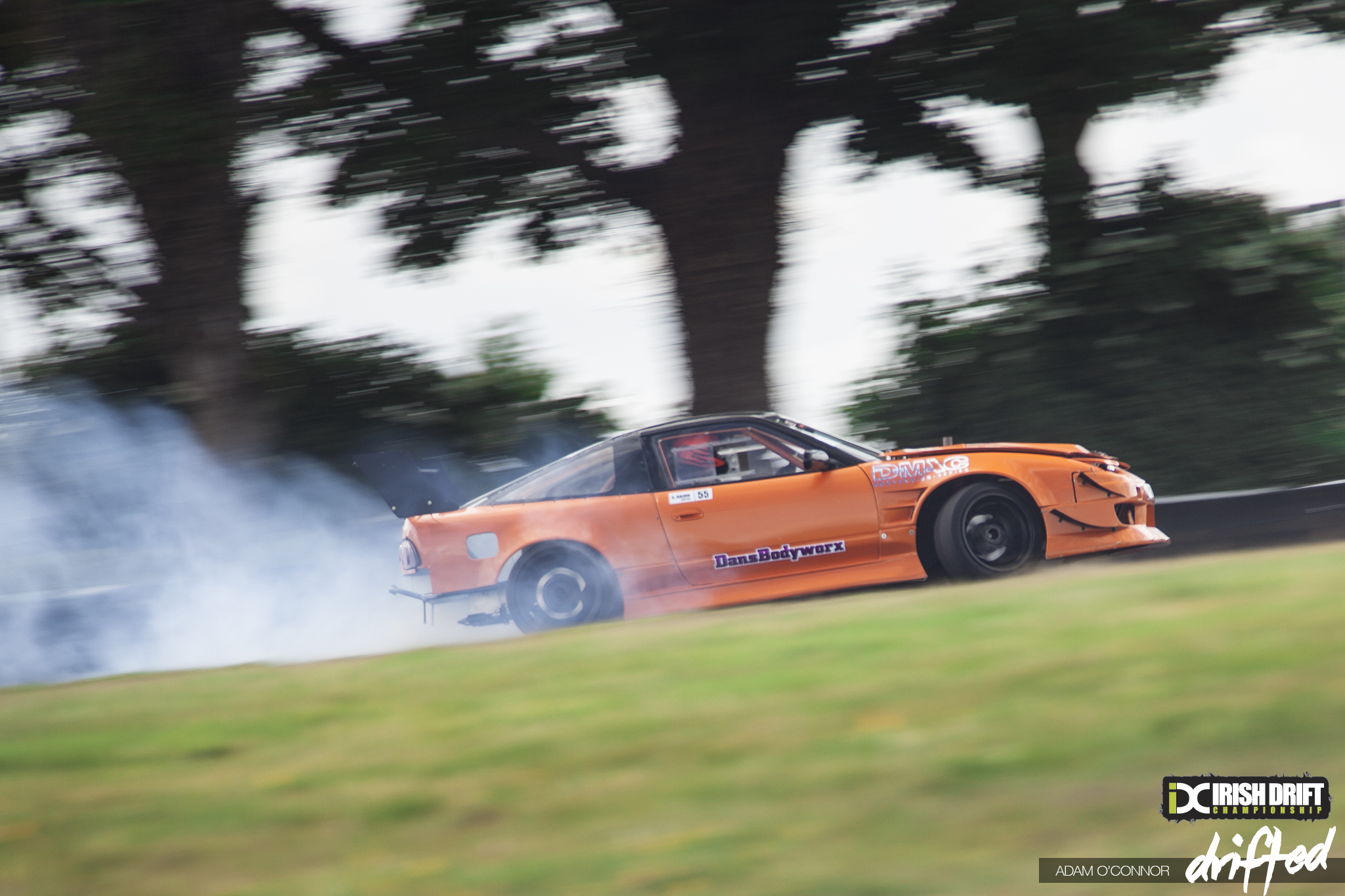 For the second year running, the best of the best came to test their wits to topple the Irish stronghold on the top of the podium but none could conquer. 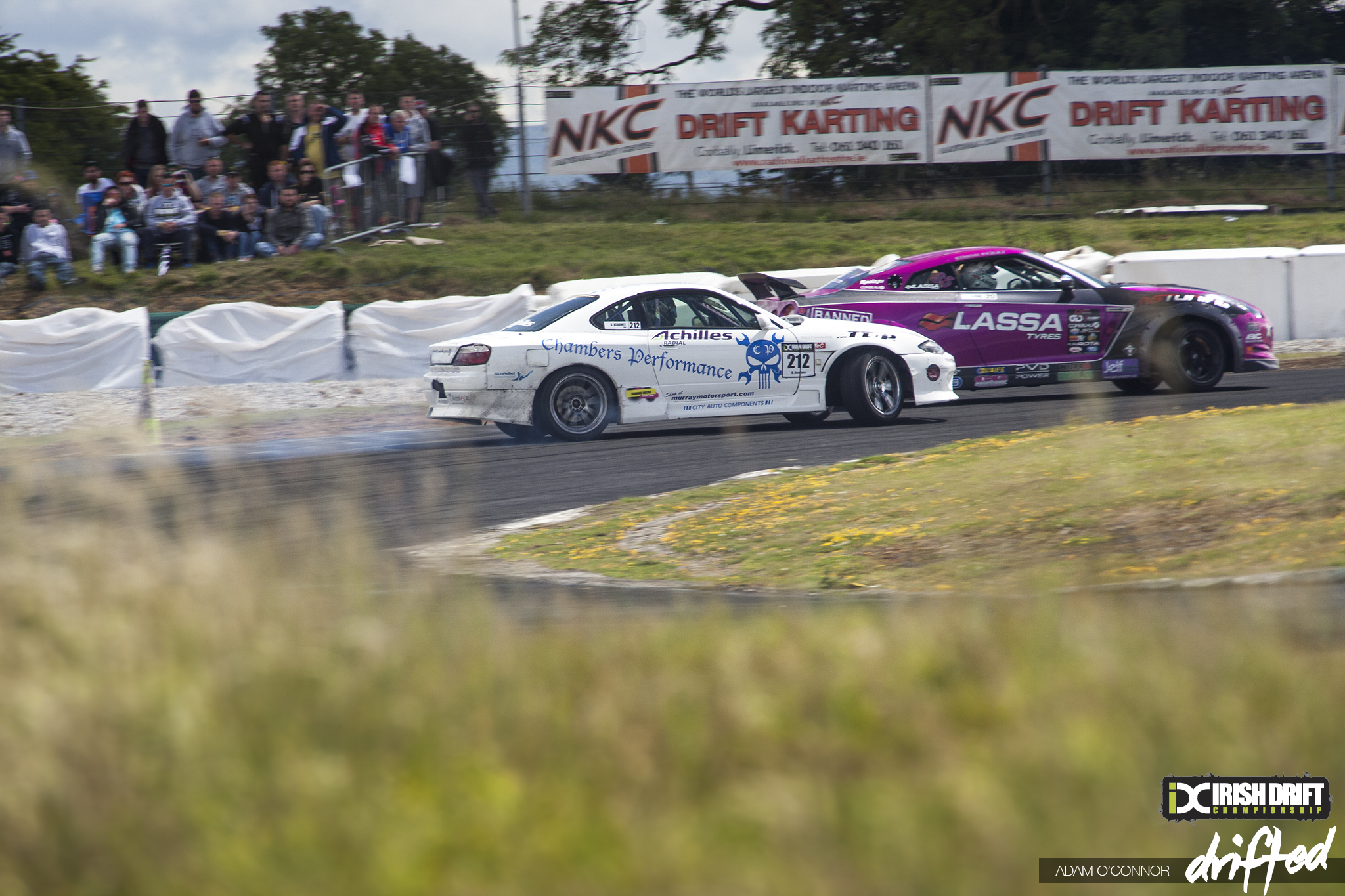 As a spectator and as a fan of Irish drifting for over half my years on this planet, I have seen Global Warfare bring a zest of life into competitive drifting in Ireland. Its a break from the norm that brings the face and cars usually reserved to the videos from social media around the world, to a small racetrack in the Irish countryside for one weekend a year. 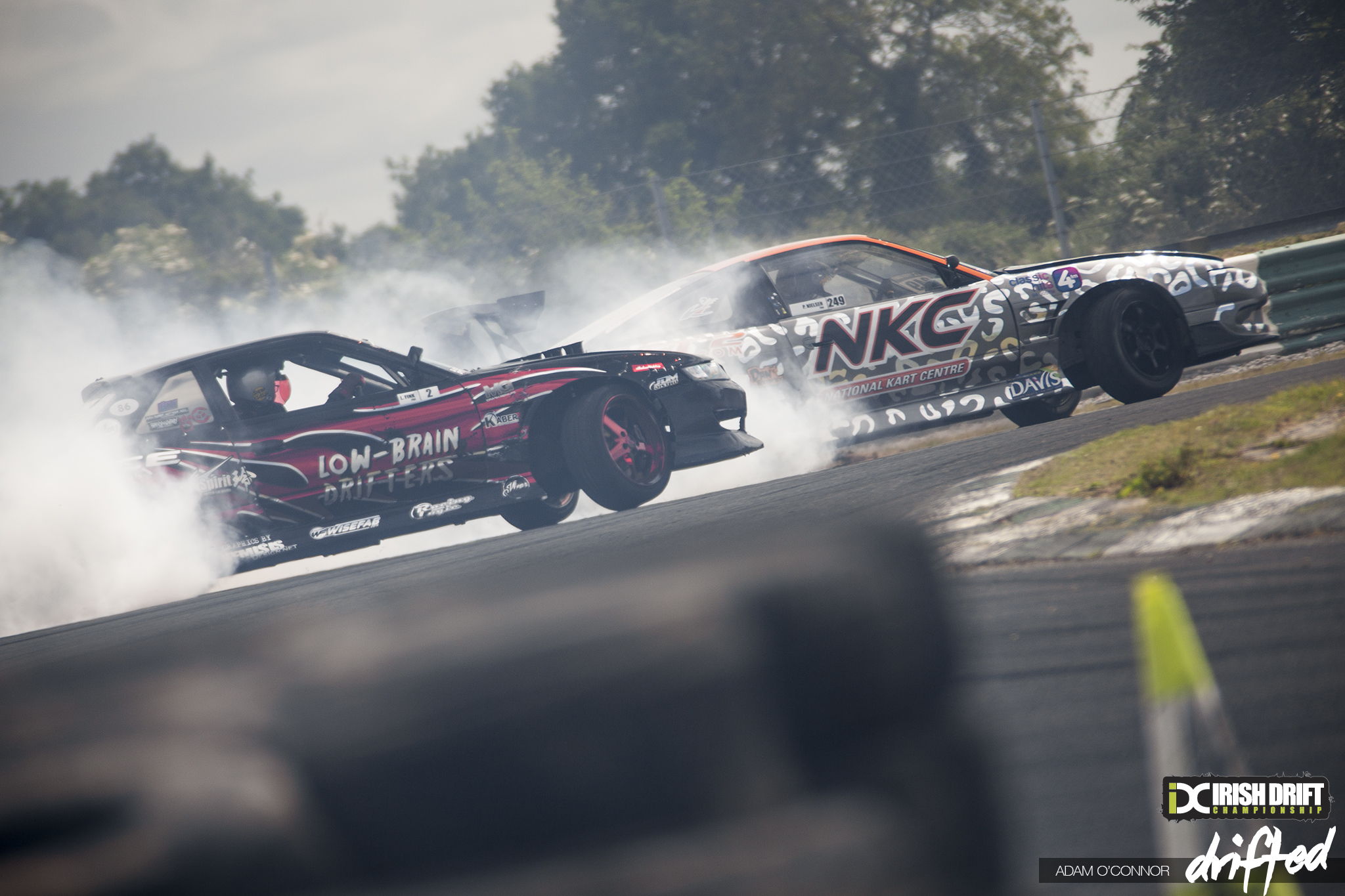 With the half way mark of the season now surpassed, its down to the nitty-gritty section of the Championship with every point being a vital life line. Jack Shanahan is currently perched on top, but with Tomas Kiely hot on his tail and James Deane rounding off the top 3, the season is all to play for with just two rounds remaining.

« GALLERY: In Yo Face! From Formula D Wall, NJ
EVENT: Heaven on Earth? This is GATEBIL! »
WhatsAppFacebookTwitterPin ItMail