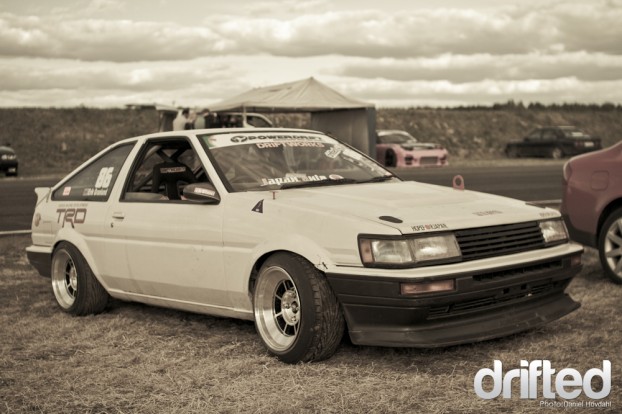 On the first round of Powerdrift a few weeks ago (better late than never, hey) I took a closer look on this very good looking AE86 standing in the paddock. More on this car after the jump! 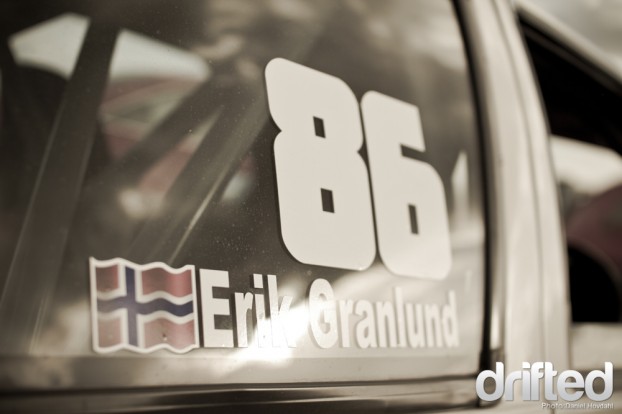 It is one of a couple, if not the only AE86 Hatch, or popularly called a Hachi Roku which is Japanese for 86. That was today’s Japanese lesson.

I digress… The owner, builder and driver of this car is Erik Granlund, who’s been building this car from the ground up over the last couple of years with 1 goal: Keeping it true to the era.

Eventhough it might be freshly built, it isn’t spotless. That is what makes it perfect, it has character and a soul. So many cars these days lack that. This is exactly why Erik loves these cars. He’s taken inspiration from old D1GP films, where Ueo, Hibino and Yoshioka are in their own Hachi’s, driving at insane speeds. These cars must be driven on the limit. Balls to the wall or go home.

Drifting a low powered N/A engine takes dedication. Weight shifting is a must. Speed is key. Clutch kicks are routine. Erik’s reason for keeping it low-powered and N/A is that your driving style has to be aggressive. You have to nail every flick, every clipping point and go all out everytime. It makes you a better driver. That’s a fact!

When running a 160bhp, keeping the weight as low as possible is a necessity. I think spartanis the word for it.

Within this spartan environment, Erik sits relatively comfortable with a set of Driftworks seats and harnesses.

Within the enginebay sits a mock-up 1.6 liter engine thrown together while his main engine is being built, which should put 200bhp when done. The one that sits in it now outputs an estimated 160bhp with double Weber 45 carbs, High comp bottom end and ported bigport 16V top.

« EVENT: DMCC Round 1, Montmagny – Drift Into the Night
DRIFTSTREAM: Formula Drift 2011 Round 4:The Gauntlet: Wall, NJ »