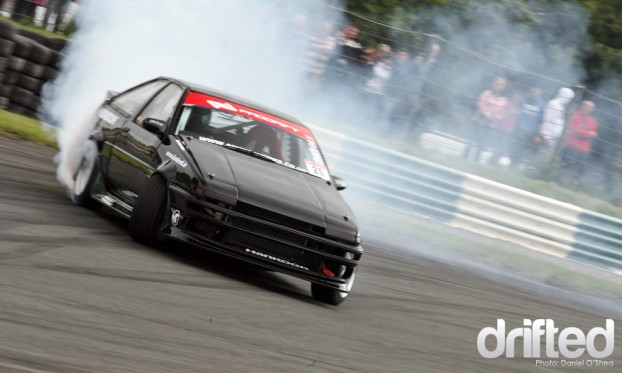 Mondello Park was the venue for the fourth round of the Irish Prodrift Series, the main event was also part of the live action for Mondello Park’s annual Japfest and Eurostyle show. Round 4 saw the return of two former PD champions to the competition, Eric O’Sullivan made his return in his rebuilt AE86 (above).

The car now sports a Trueno front, but still features the same screaming Honda S2000 engine that helped Eric become the 2007 Prodrift Champion. This is also the car that Eric competed in at the Redbull World Drift Championship in Longbeach. 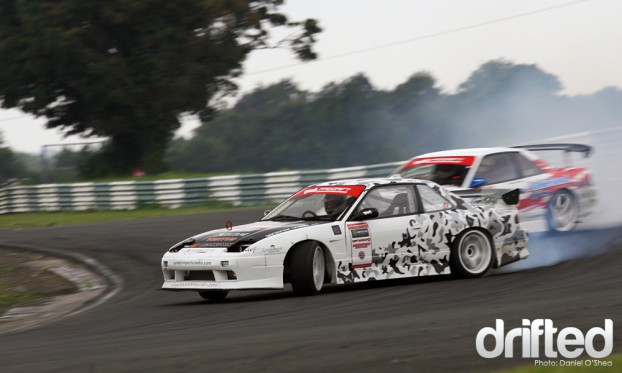 Two time Prodrift Champion Damien Mulvey also made his return after a break from the sport. His familiar Onevia is now powered by a high power SR20, in place of the RB26 that used to lurk under the bonnet.

Heavy rainfall on Saturday made Qualifying difficult, with Pro seeded practise taking place in the wet and qualifying on a fast dying track. This allowed three Pro unseeded drivers to move up to the Top 16 battles, Damien Mulvey, Martin O’Meara and Francis O’Shea. 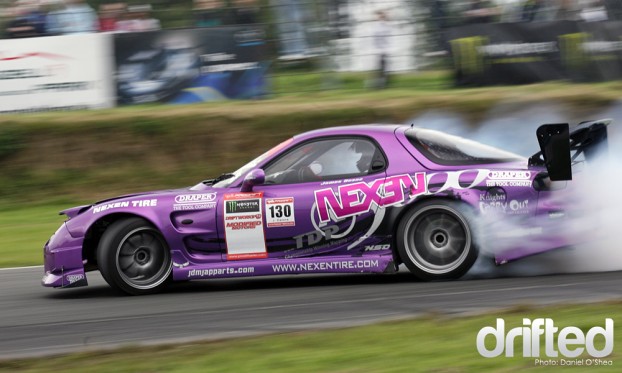 Superlap on Sunday however took place in the dry, and this allowed for a longer run in to the first bend and so much higher speeds. James Deane in his Nexen SR20 powered RX-7 was recorded at 122km/hr drifting through the first bend. This was the highest speed in Superlap but didn’t give James the Superlap win, but second place to Eric O’Sullivan.

To give a better view of track, we go on board with Martin O’Meara for his Superlap run. 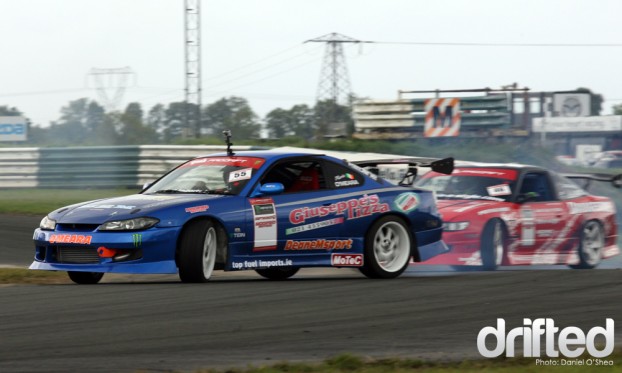 The first battle was between number 1 in Superlap Eric O’Sullivan and Chris Brady in his RB25 powered S14. Chris made a good attempt at following the former champion, but when Eric was following he was able to drift side by side with Chris and this ultimately gave him the win.

The second battle saw the Unseed Pro winner of Round 4 Martin O’Meara take on Mike Fitz. Nothing separated the two drivers, and the judges called a “One more time”, and a slight straighten by Martin on the transition between corner one and two, gave the battle to Mike in his Bridgestone 180SX. 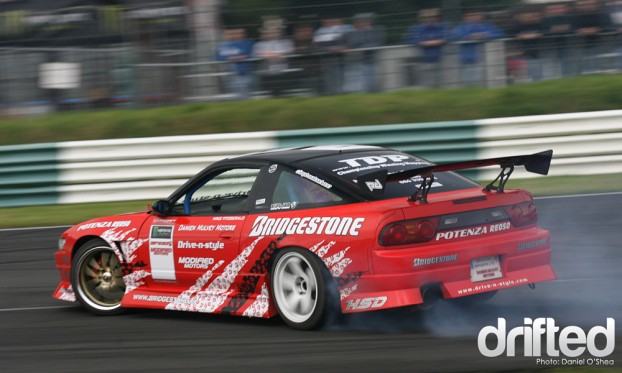 Another exciting top 16 battle was between the returning Damien Mulvey and John Paul McCarthy in his deafening 4 door E36 M3. High speed entries, huge angles and door to door drifting was guaranteed and these two drivers didn’t disappoint the capacity crowd. 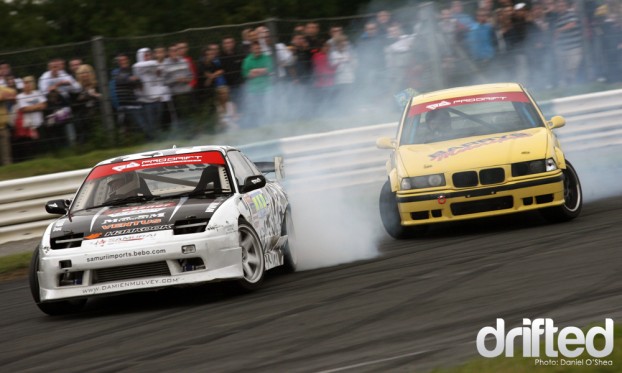 Nothing separated the two drivers after their runs and once again the judges need to see them run one more time, as did all the spectators! In the second run, despite the amount of smoke pouring out of the back arches of Mulvey’s car, John Paul was able to close in on him and this aggressive driving helped him advance to the great 8. 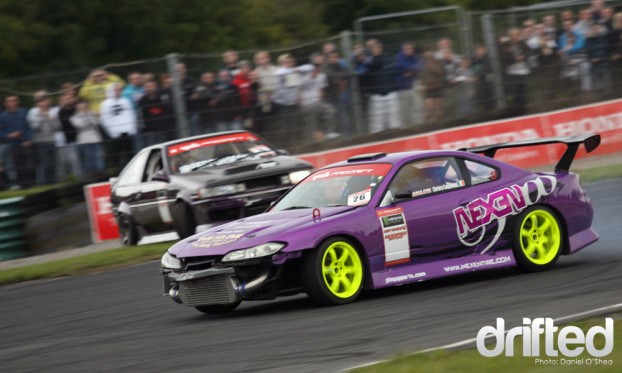 In the battle between Damien Shortt and Christy Carpenter, Damien lead into the first bend, Christy was carrying too much speed while following and couldn’t avoid making contact with the back of Damien’s car. After the incident when lining up for the second run, Damien’s car suffered mechanical failure and he was out of the competition. The mechanical issues were not related to the collision, and as a result Christy progressed to the top 8 where he would face team mate James Deane, who won his top 16 battle against Steven Bolger, see photo below. 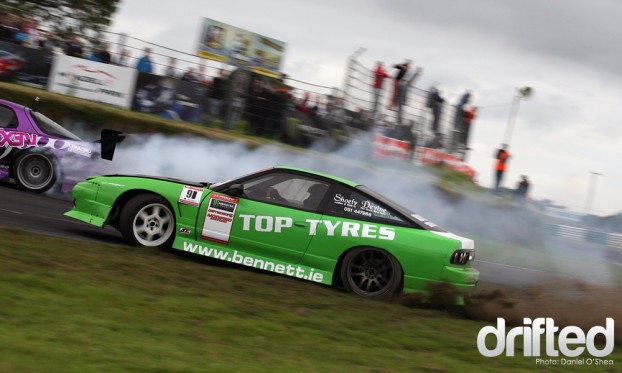 In the Great 8, Alan Sinnott in his Hankook SR86 meet Dan Moorhead who was driving a new car, a 180sx in place of his S14.5 Silvia. Dan’s 180SX was built up to Pro spec in a few weeks just prior to the event, however Alan’s smoke machine was to go through to the top 4. 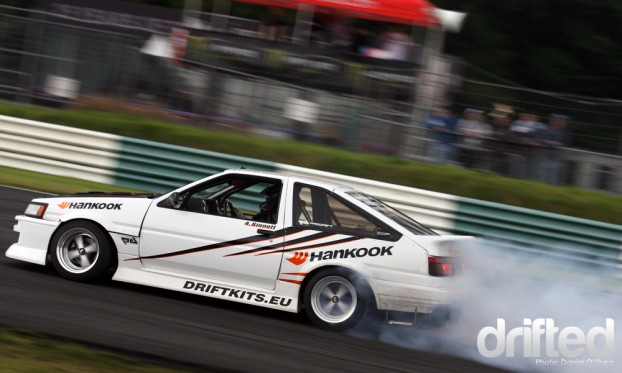 Mike Deane progressed after a tough battle with John Paul McCarthy, and would meet his younger brother James in the semi final following an all Nexen top 8 battle with Christy Carpenter. Eric O’Sullivan faced the Bridgestone 180sx of Mike Fitz, but a spin by Fitz handed the win to Eric. 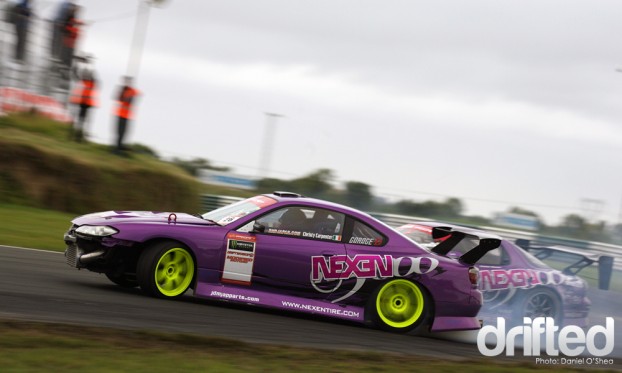 Mike versus James Deane, these two have meet a good few times like this recently either in the semi final or the final, with more wins going James’ way and this time was no different, James yet again made the final and with this stretches his lead in the championship. 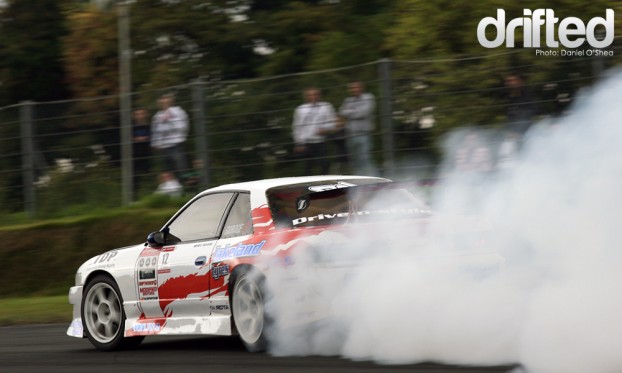 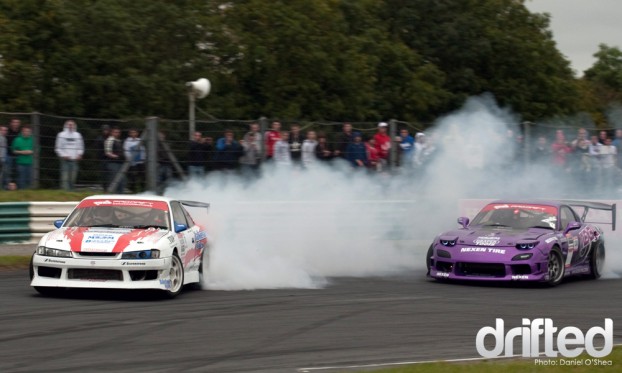 In the second semi final, it was an all Hankook battle with Eric O’Sullivan and Alan Sinnott. Both driving AE86’s with engine swaps, Alan with forced induction in the form of a high power SR20 and Eric with a screaming naturally aspirated F20c. Eric once again showed why he is a professional Drifter, and booked his place in the final along with James Deane. 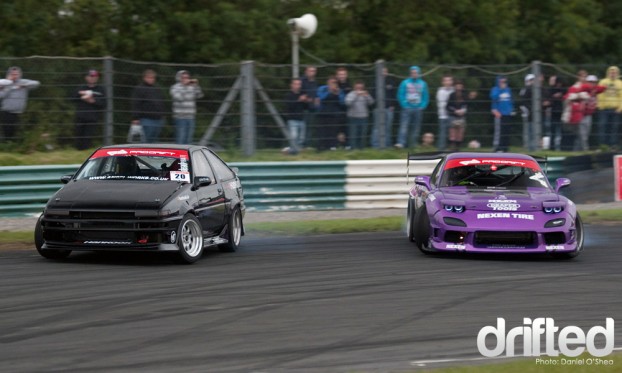 A very close final took place in front of the crowd as the weather looked set to break. Nothing separated them after the first run, the the judges and indeed all of Mondello shouting for One more time. However disaster struck, James Deane’s car was unable to drive, the RB25 gearbox had enough. Eric O’Sullivan on his return to Irish drifting had taken first in superlap and also the overall win.

In the third and fourth playoff Mike Deane took third place with Alan Sinnott rounding off the top 4. The final result for the top 3 drivers on the day matched their Superlap positions.

The final round of the Prodrift Championship takes place on the 25th and 26th of September in Fermoy the venue of round 1 and is sure to be an epic event.

One final clip from the event, from Christy Carpenter’s Nexen 1JZ S15