Well i was right, Rd 3 of the British Drift Championship did turn out to be an action packed day.

Changing weather conditions, mechanical problems, crashes and trips into the gravel seemed to be the order of the day.

The day started well with a buzz in the paddock, everybody was looking happy. Some people were just finishing those last minute jobs, while well-prepared others just giving their cars a final clean. 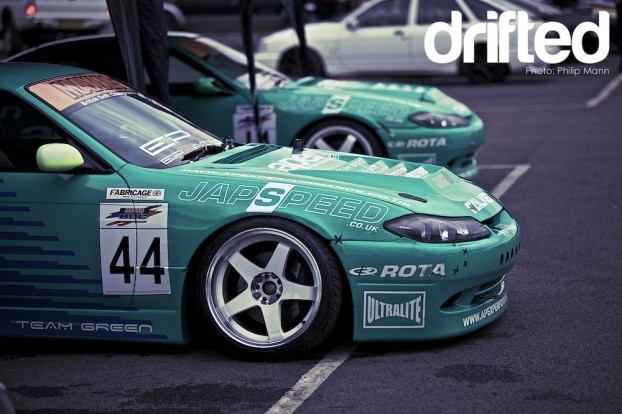 Paul Cheshire’s car looking Clean and ready to go, but would it still look this good by the end of the day?

2 cars that were missing as the drivers briefing took place were the S15 and R32 from Driftworks. The diff on the R32 had caught fire and the boys had to pull over to put it out. The drivers all decided at the drivers briefing to let them run even if they turned up late. The other decision made was to run the circuit without a chicane. It would mean that some of the lower powered cars may struggle to link the 2nd and 3rd corners.

The semi-pro’s were the first out on track.  The drivers were not pushing hard for the first few laps, just trying to find the grip levels and get their angle right coming into the first corner. It was not long before the cars started getting friendly with the gravel. Rich Tovey takes the award for being the first driver to lose bodyparts, losing his rear bumper coming out of the 3rd corner. The Lydden Hill recovery team were in for a long day, Noel Phipps being the first driver to need towing out of the gravel, but he would be the first of many. 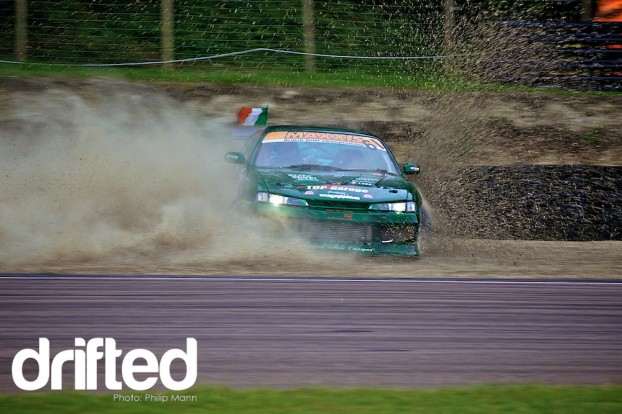 Next up it was the turn of the pro’s.  Right out of the gate some of the drivers were on it. Drivers were pushing themselves and their cars, trying to get the perfect angle and speed out of the second corner to link to the third. As there was no chicane the judges did not want to see drivers doing a full manji across the track to link the 2 corners, an easy task for the big power cars, but full commitment needed by some to link this section.

Declan Munnelly getting it right and powering through the last corner.

It was then right into the second practice for the semi-pro’s. This time the drivers were pushing right from the get go. Martin Griffiths and Jordan Patton were dirt dropping on the exit of the hairpin, trying to use every last inch of the track, and then some. The drivers were starting to get the perfect line between the hairpin and the final corner.

Then disaster struck. A collision between Mike Cooper and Joe Ball at the third corner would put both drivers out. The damage to Mike’s car looks like it could be a write-off. I’m just hoping that he can get something sorted out in time for Round 4. Once the session had restarted the confidence grew, the speeds got quicker and the angles got bigger.

As the clouds come rolling in the pros came out for their second and last practice. Some of the drivers were starting to pull crazy angles into the first corner. They were also getting nice and close up at the hairpin when twinning. I personally enjoyed this session as different drivers practiced with each other. The roar of Shane’s V8 powered S15 being chased by Steve’s screaming Toyota Starlet was amazing.

The rain started to fall towards the end of the practice but that didn’t stop the drivers pushing hard, trying to work out all the kinks before going into Qualification right after lunch.

Well that’s it for the practice sessions, i will leave you with a few more pictures from the morning. 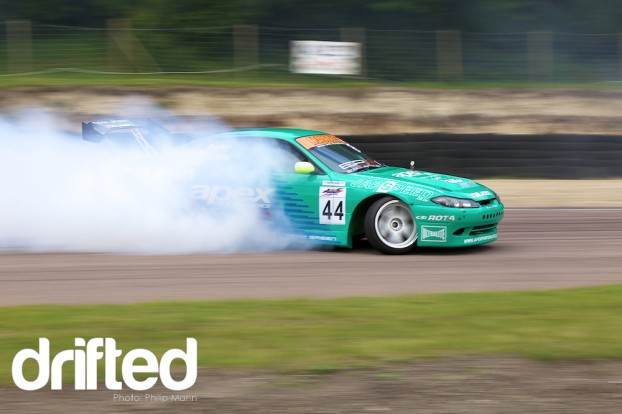 Polo getting it right.

Brad getting it wrong. 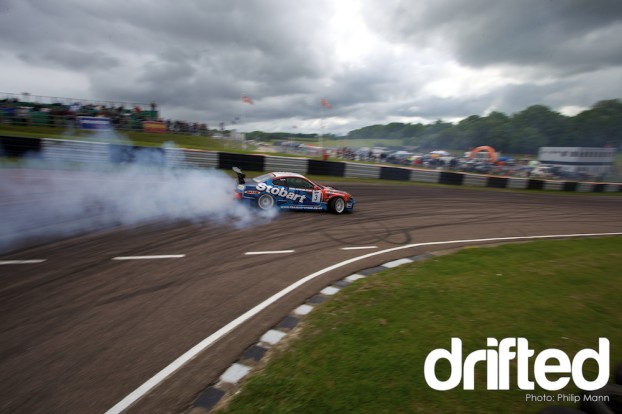 The rain is coming.

Check back shortly for all the action from the afternoons Qualification and Battles.

Please leave your comments below, it’s my first time writing about an event, so let me know. Good and bad feedback welcome.