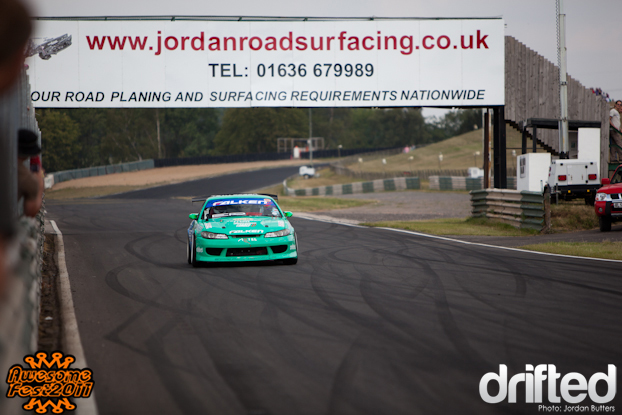 We experienced a rare thing following on from where we left off after Awesomefest. And that was much needed time off. The longest break in our 2011 drifting calendar. Three whole weeks without a competition or demo event!

To be honest, we needed it prepare for the mammoth journey north to Knockhill Circuit near Dunfermline, Scotland. Although it has to be said sending the cars up on the car transporter is an absolute life savers over towing them up on trailers. We can’t wait to get our full race trailer built and painted! 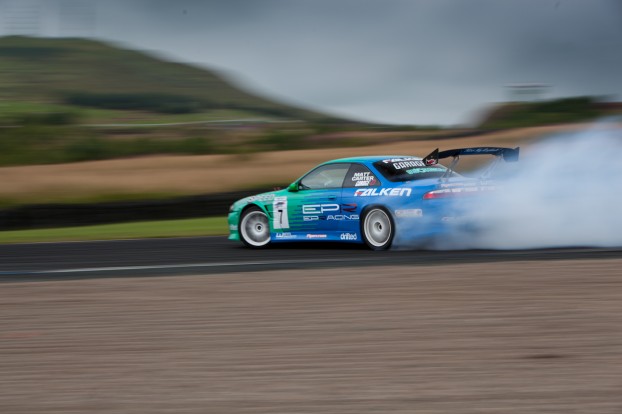 Knockhill could definately be counted as a success for the team. Going into the round Matt was leading Mark Luney and the Cosworth SATS team in the championship standings by a narrow margin so victory was essential.

As it turned out, all three drivers qualified for the Top 16 battles. Polo took the G35 into 16th position in the Pro Class. Alan took 14th place in the Super Pro Class and Matt Carter took 7th in Super Pro. 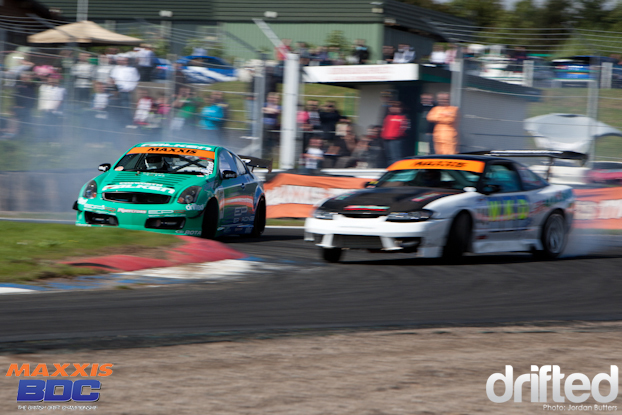 After two close battles a slight mistake from Paul gave Wesley the win.

Nevertheless valuable seat-time in the car for Paul and points on the boards. This is him happy, imagine what he looks like sad!

In the Super Pro Class Alan was attacking the ‘Seat Curves’ at Knockhill with speed and aggression, flirting with the gravel trap on occasion! 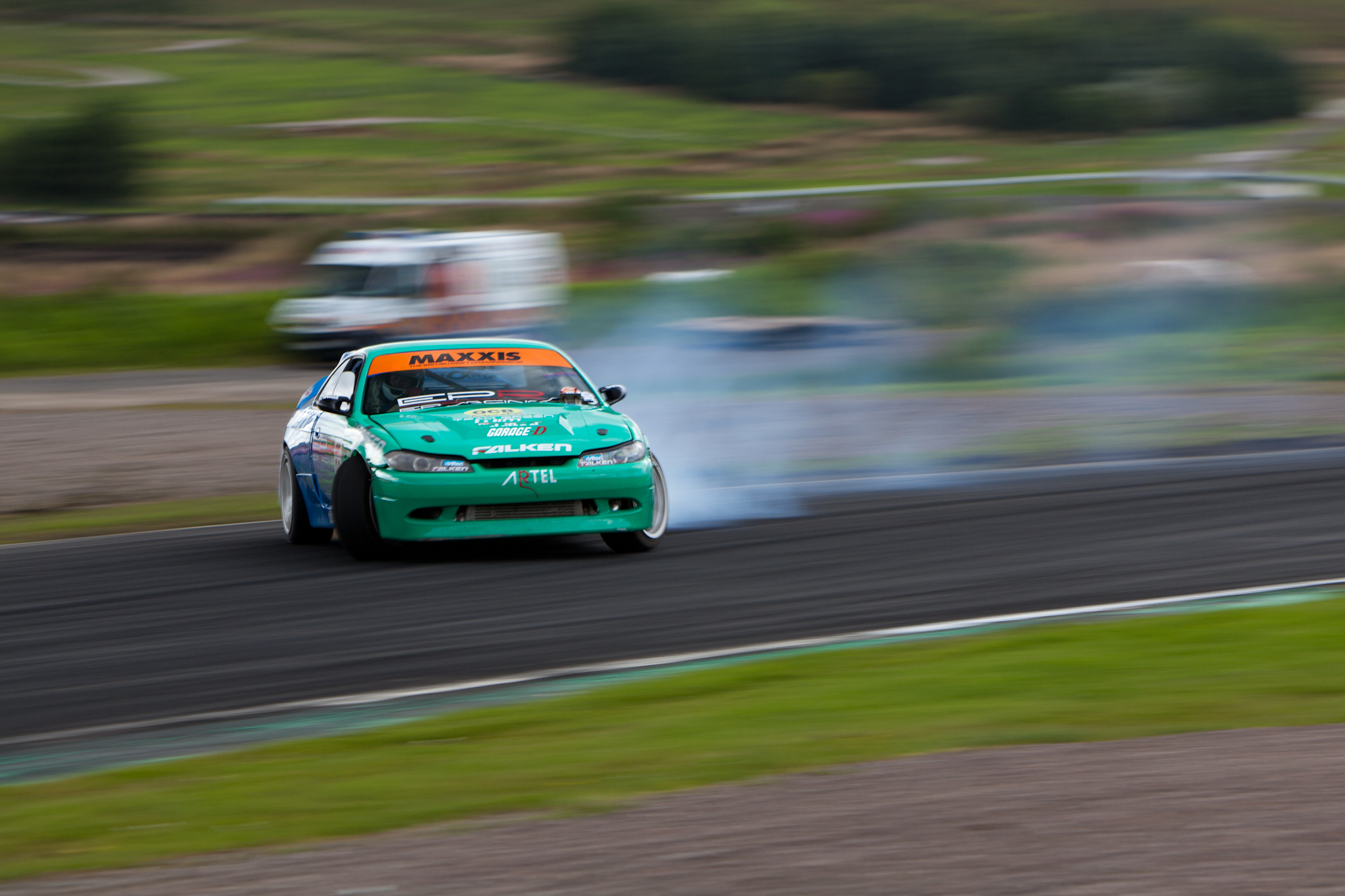 A Top 16 draw against Mark Luney’s powerful SATS Cosworth Supra saw Alan put up a good fight, but not enough for the judges to swing the win in his favour. 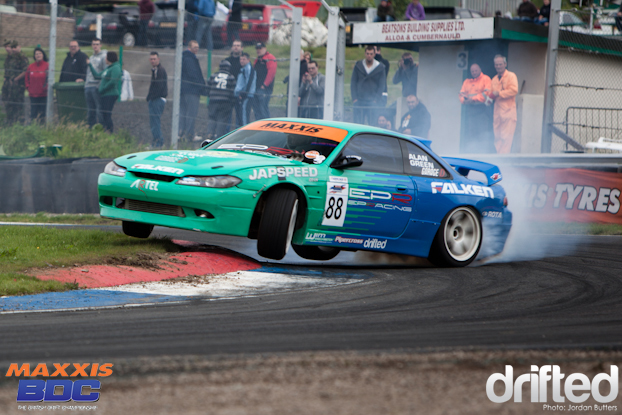 All the mechanical gremlins have been worked out of the engine from Teesside now so Alan is looking forward to the Super Pro only round at Silverstone on 4th September in front of packed grandstands at this year’s TRAX event. 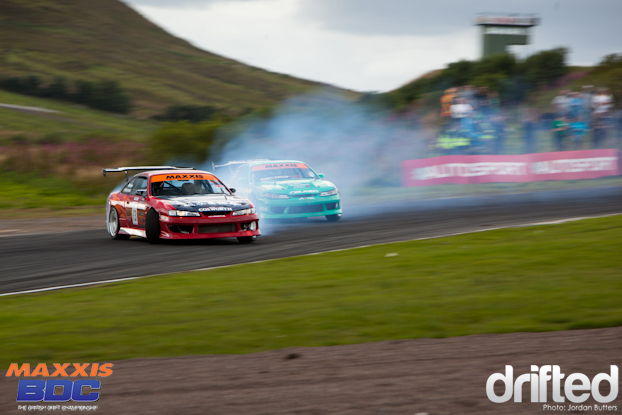 Matt was faced against Steve Moor in the Top 16, his opponent at the last round’s Finals at Teesside. 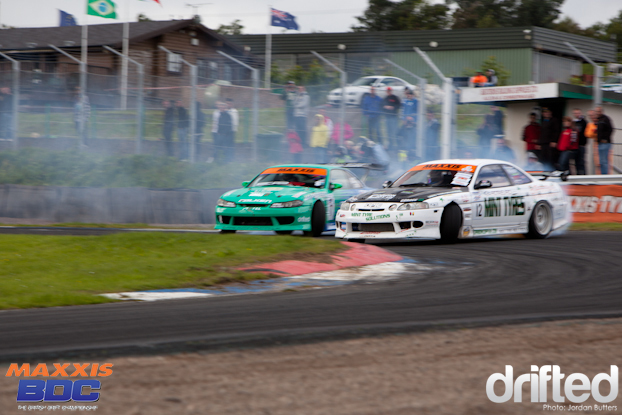 Matt’s speed and angle throughout the course gave him the win over Steve and he made progression into the Final 8 against Wayne Keeber in the Mint Tyres Soarer. 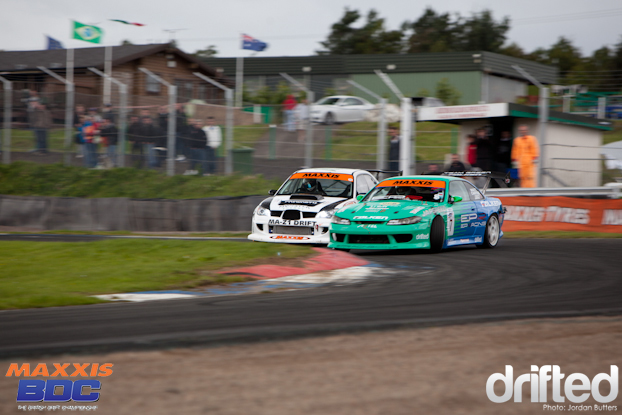 Two straight victories against Wayne saw Matt into the Semi Finals against Team Japspeed’s Stephen Biagioni in the Japspeed Maxxis Subaru Impreza. The crowd were on the edge of their seats as the two battled through two rounds of extremely close drifting. 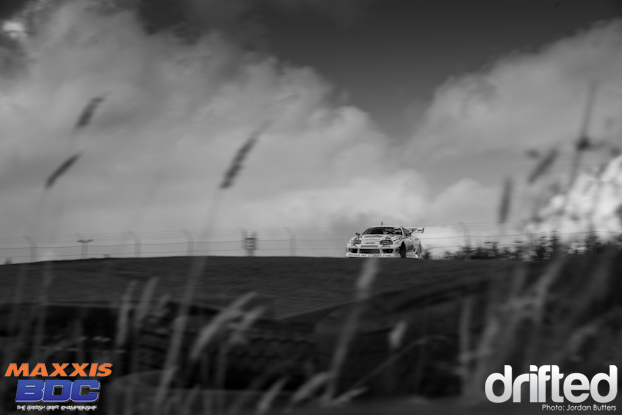 The judges ruled in Matt’s favour and he found himself in his fourth Final from four rounds this year! His opponent was to be championship contender Mark Luney in the 800bhp SATS Supra! As the two drivers lined up the tension rose, this battle would see the victor take the lead in the championship going into the penultimate round! As they set off Mark used his power advantage to pull a gap on the Falken S14.5, causing Matt to straighten slightly after the hill to gain ground.

It was looking like the advantage would be handed to Mark however an error going into the final bend saw the Supra spin round 360 degree’s giving Matt Carter a 10-0 advantage! The second run saw a close battle but Luney making the same error and sending the Supra into a spin gave Matt another 10-0 and the win at Knockhill! 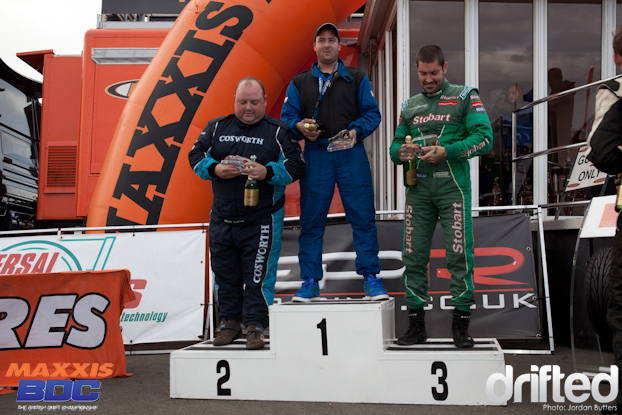 Finally after three consequtive second places Matt was standing on top of the podium and extended his championship lead!

Knockhill was in the bag and just two weeks later we were to be back in England at the home of British motor racing, Silverstone. News was filtering in that Formula Drift stars Darren ‘D-Mac’ Macnamara and Fredric Aasbø were to be joining us along with the return of 2010 BDC champion Driftworks’ Phil Morrison. What an amazing line up! Silverstone rolled around super-quick and although it was to be a Super-Pro round only, we took all three cars along still.

Polo’s G35 was parked up on our sponsor EP Racing’s stand at the event and was a pretty popular attraction all day! 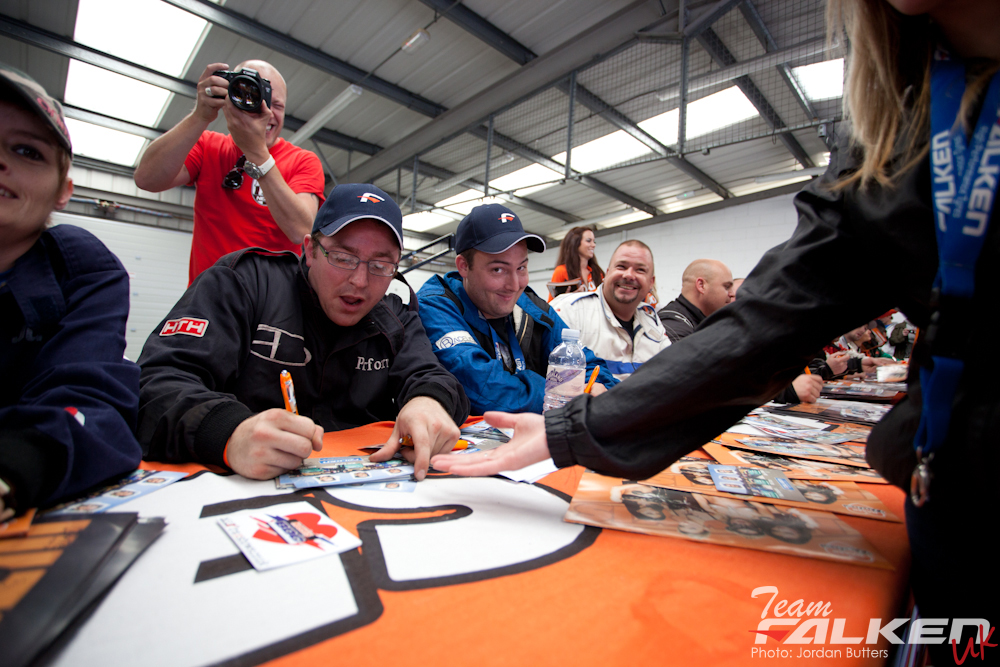 The team took the chance to meet fans and sign autographs. We took time to teach Alan how to write.

After rain all morning and throughout the practice session Matt and Alan went out to qualify in front of the large Silverstone crowd.

Tricky conditions and an incredibly slippery surface meant that most drivers were finding it difficult to stay on track. 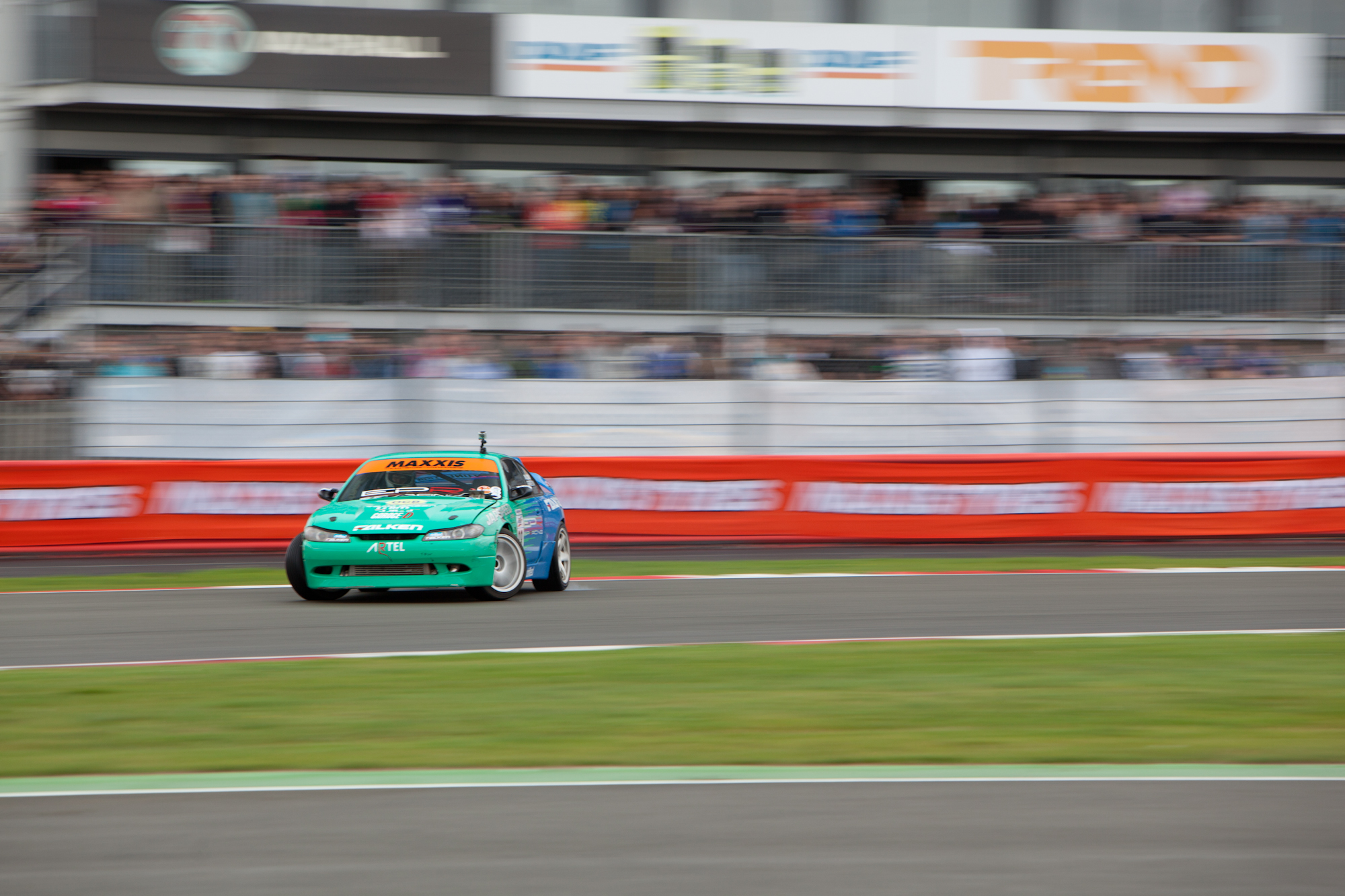 Both drivers managed to put in safe runs, qualifying Matt in 7th position and Alan in 15th position. 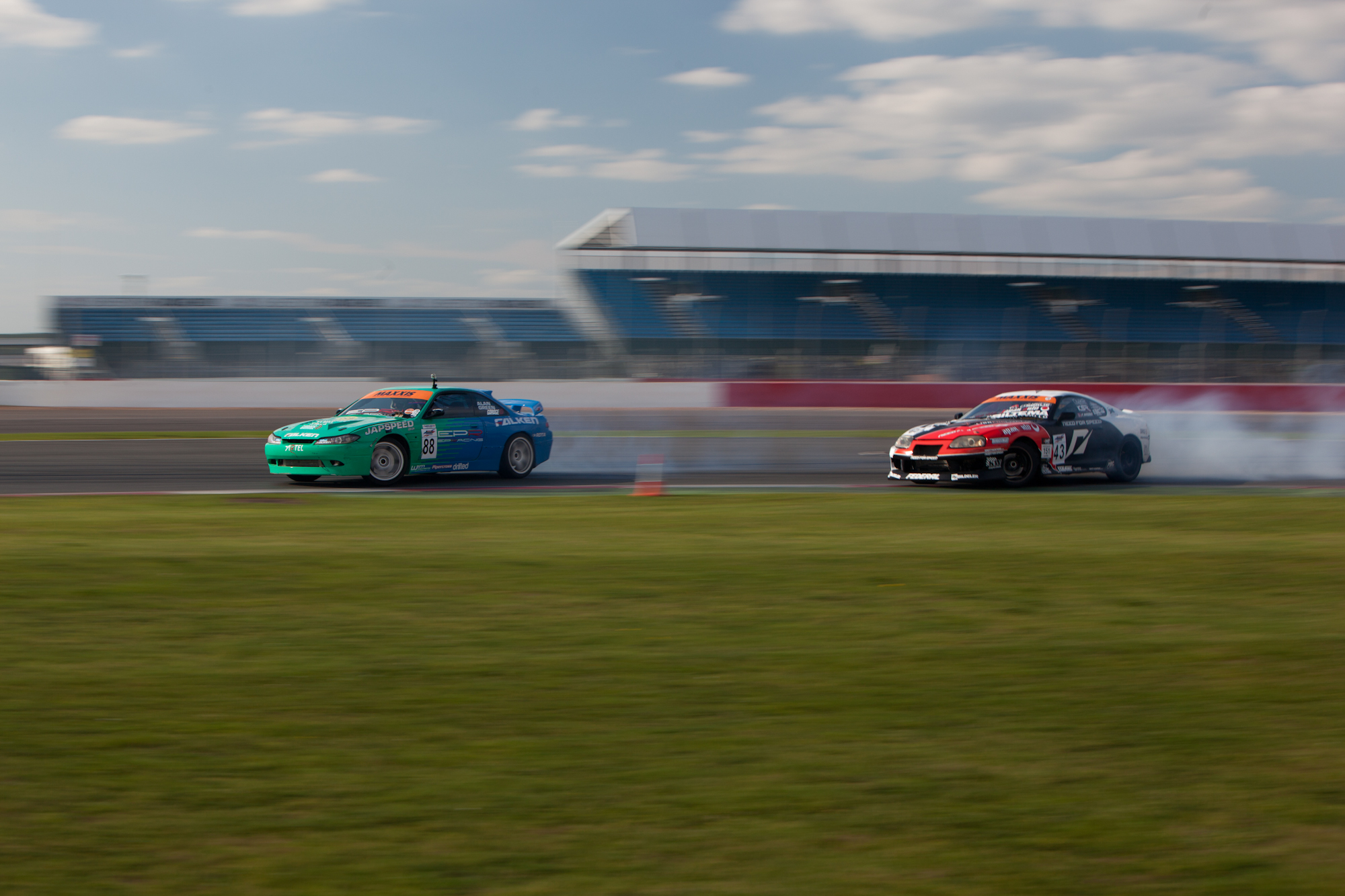 Alan was first up against the formidable force of Formula Drift professional and special guest Fredric Aasbø in the Need for Speed Supra. Alan put up a good fight but could not match Fredric’s speed on the straight, the judges ruled this gap was enough to hand Fredric the win, ending Alan’s chances at Silverstone.

Championship leader Matt Carter went up against Irish Prodrift driver Dan Moorhead in the Top 16. This was the first time the two had met in the battle stages. On the first run Dan could not match Matt’s grip going into the first corner and slid off the track onto the grass, giving Matt a 10-0 advantage going into the second run. On the second run Matt glues himself to Dan’s door for the entire circuit, the crowd love this close drifting! Matt moves on to the Great 8 stages. 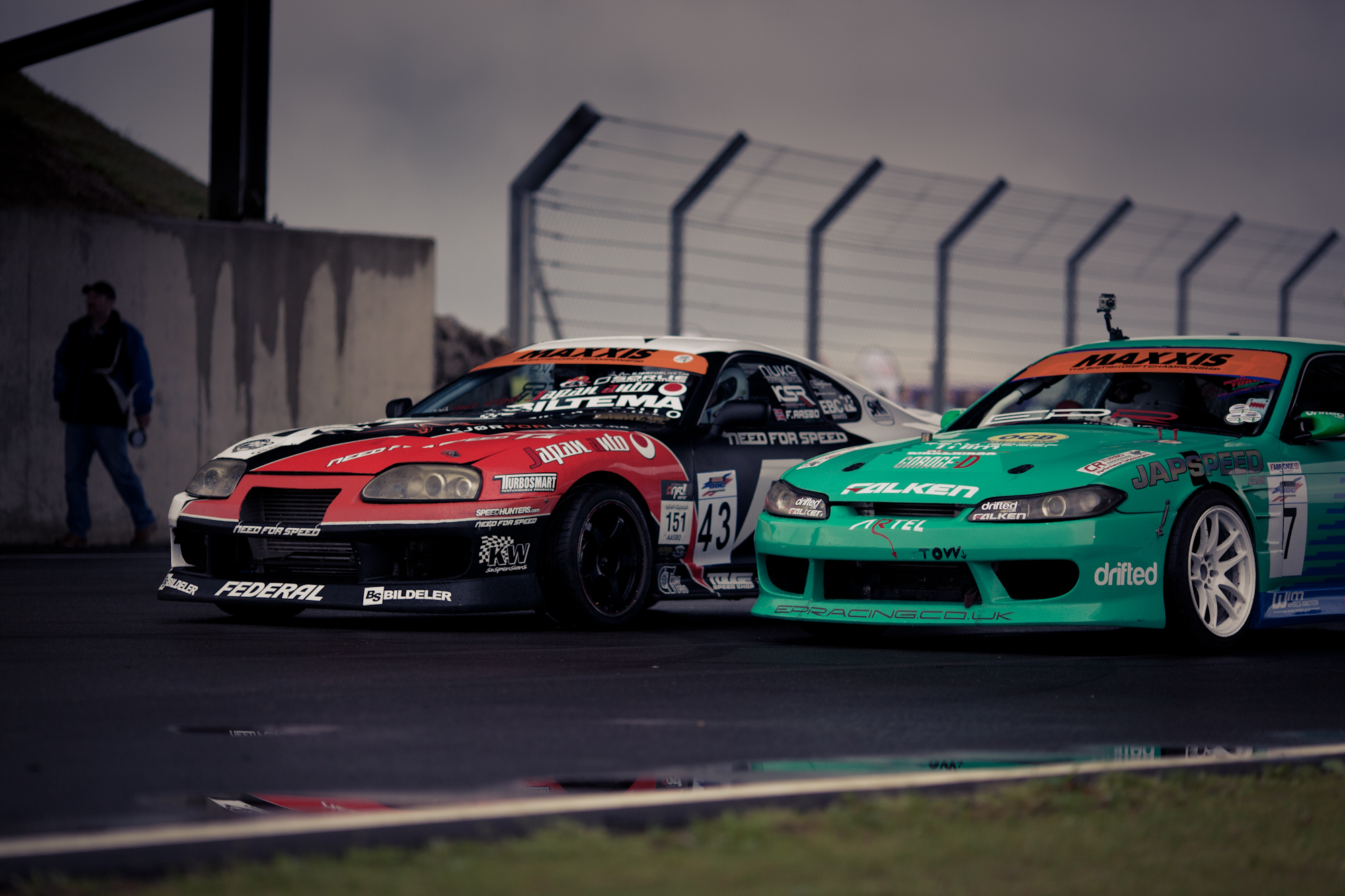 In the Great 8 Matt would also come face to face with Fredric Aasbø. 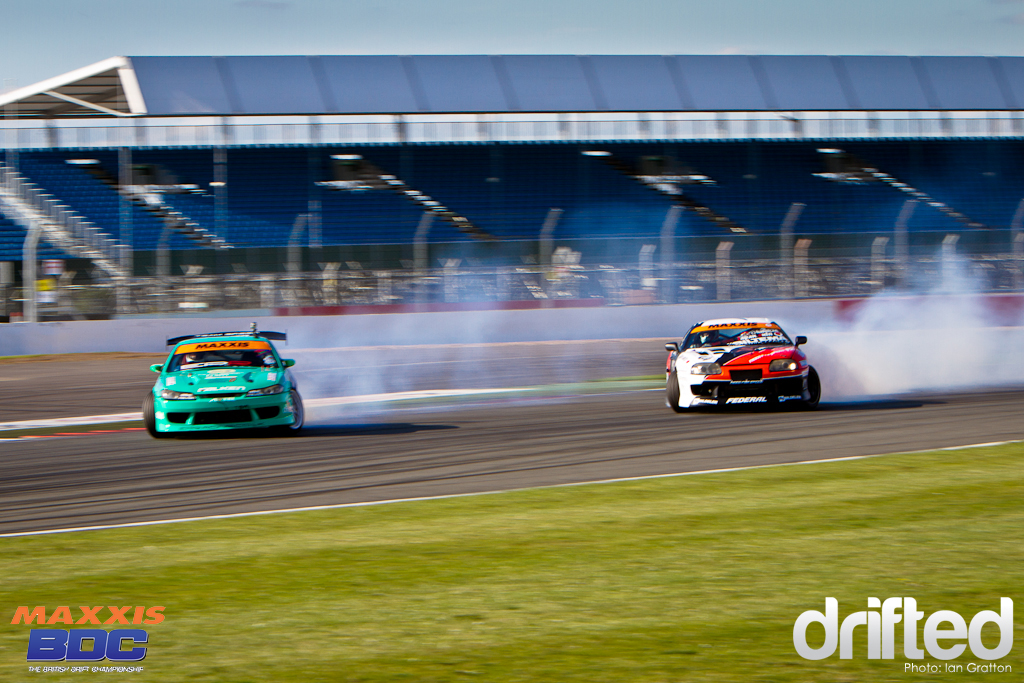 On the first run Fredric leads and manages to pull a gap on throughout the course, the Supra is simply too fast for Matt! On the second battle Matt leads and puts in a flawless run, but the gap from the first run is judged to have settled it and Matt’s event comes to an end. 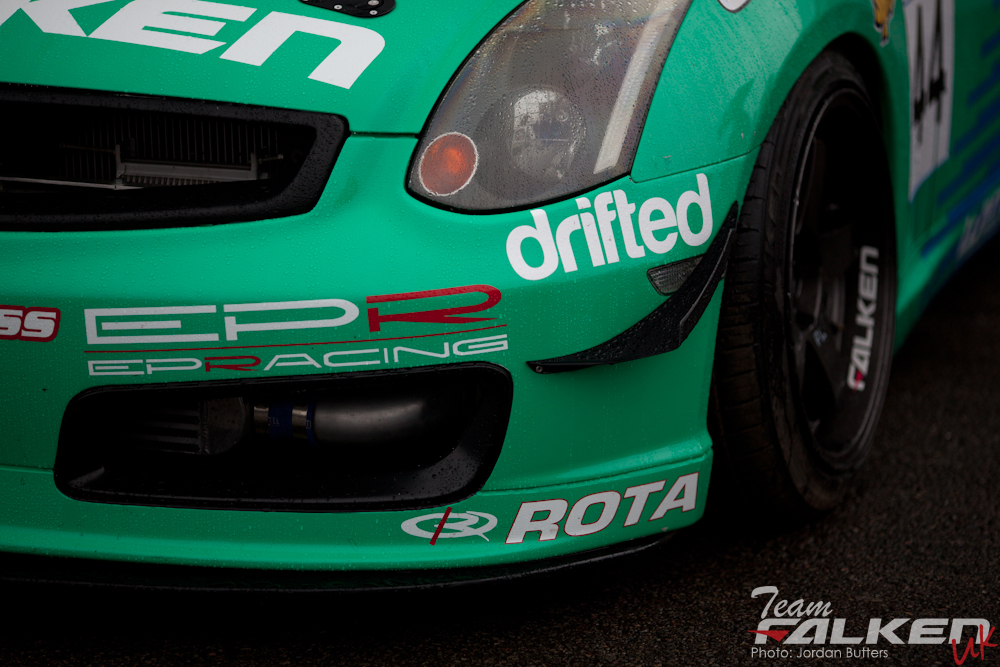 Despite no podiums for the team at Round 5 Matt Carter still leads the Super Pro Class by 14 points, Alan Green still sits in 12th position and in the Pro Class Paul Cheshire sits 16th position. In the Constructors Standings Team Falken UK lead the table by 24 points. With just one remaining round in the 2011 Championship the pressure is on for a good result at Sunderland!

One thing we had set our eyes on in 2011 was making a return to the Prodrift Series in Ireland. Prodrift has proved itself as the feeder series for some of the best drivers in Formula Drift, with D-Mac, Dean Kearney, James Deane and Eric O’Sullivan all starting out competing in the series. 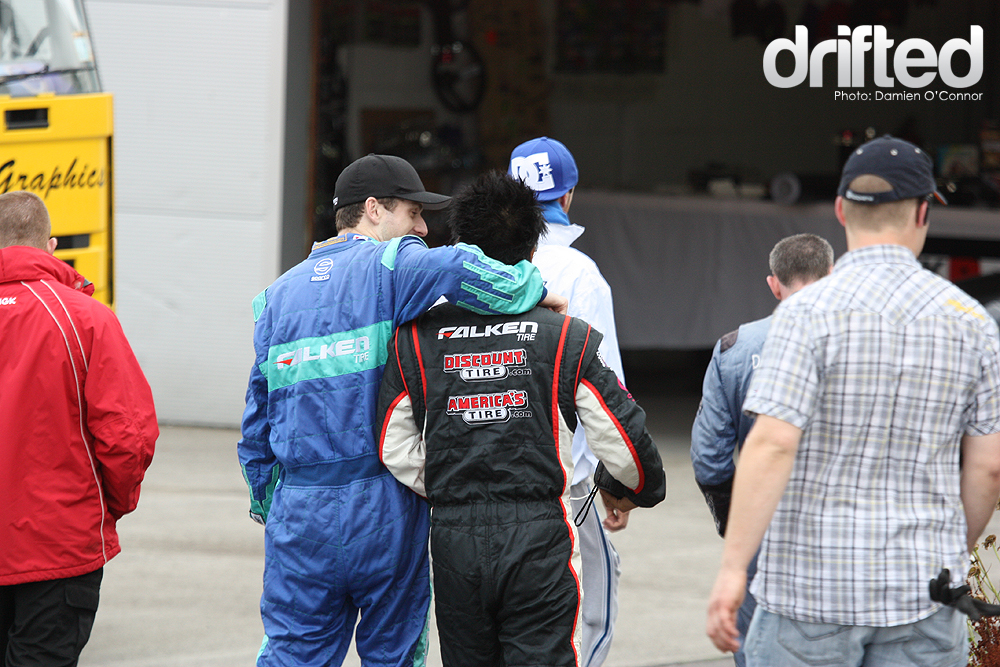 Three of the four were to be returning for the Final round at Mondello so we knew we had to be there too! Team Japspeed drivers Shane and Baggsy were also over for the event along with Driftworks Phil Morrison and one final surprise…. 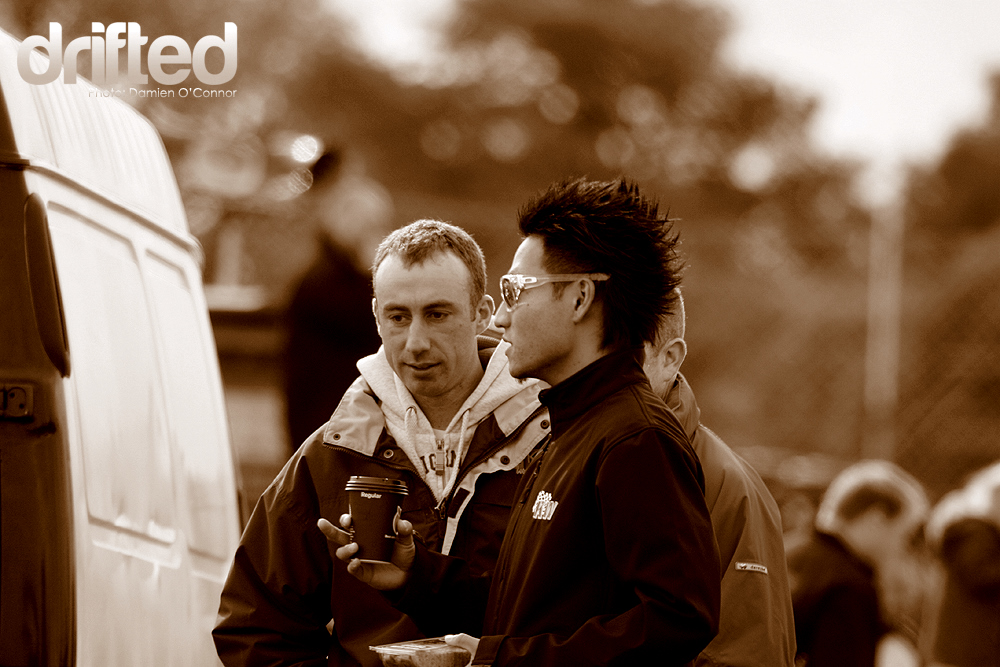 Falken Tire and Formula Drift points leader Daijiro Yoshihara was to join the Falken stables for the event! 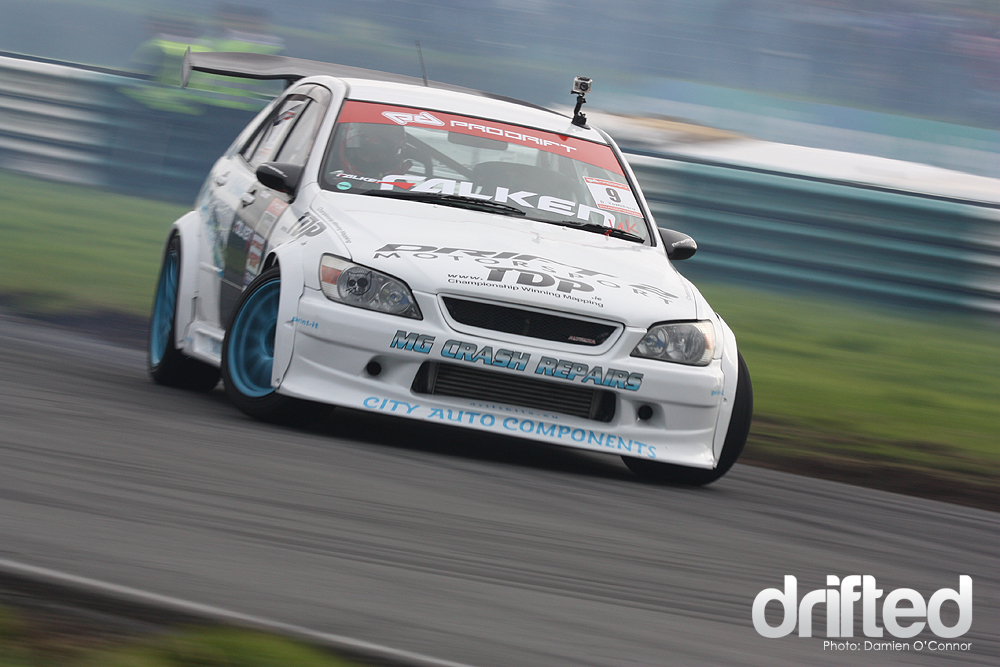 Dai was to be driving an SR20 powered Toyota Altezza at the event in his first time on Irish soil. 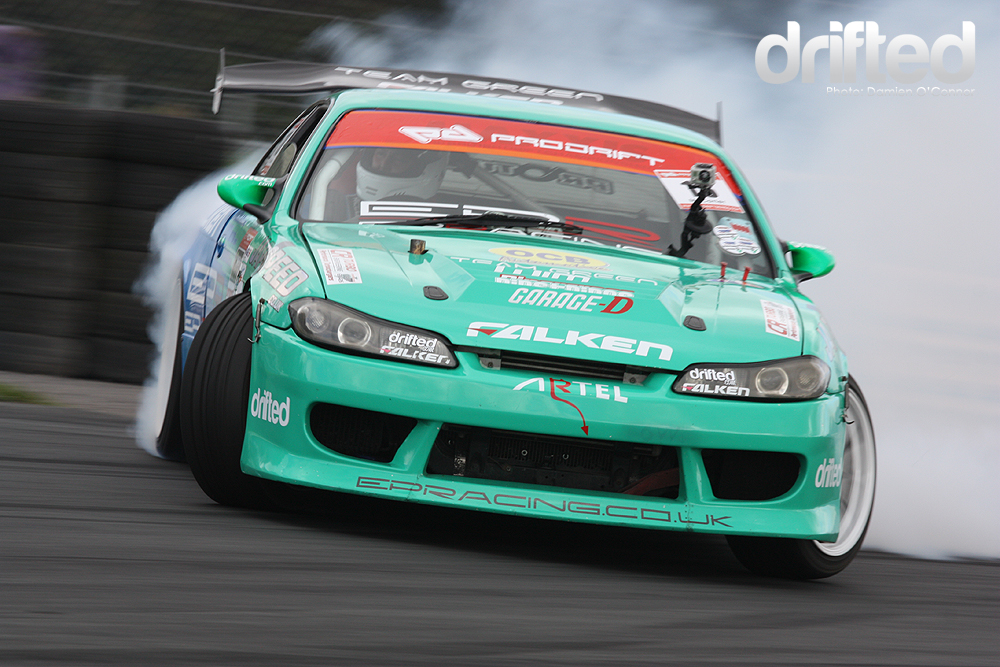 Unfortunately uncharacteristic mistakes from both Matt and Paul saw neither of them qualify. 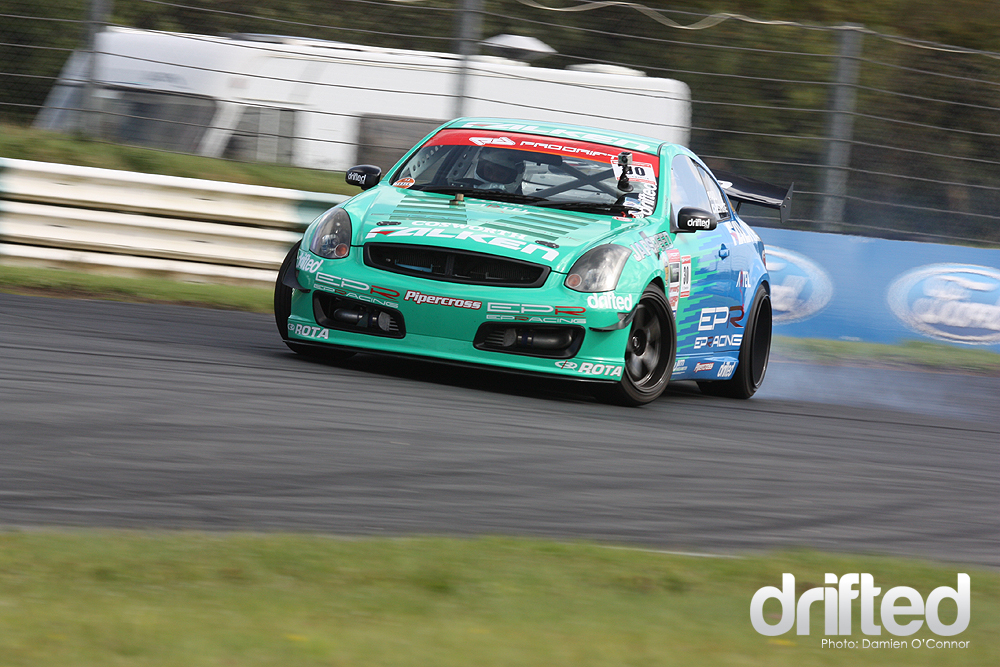 Nontheless an amazing event organised by the Prodrift team and we can’t wait to go back next year! 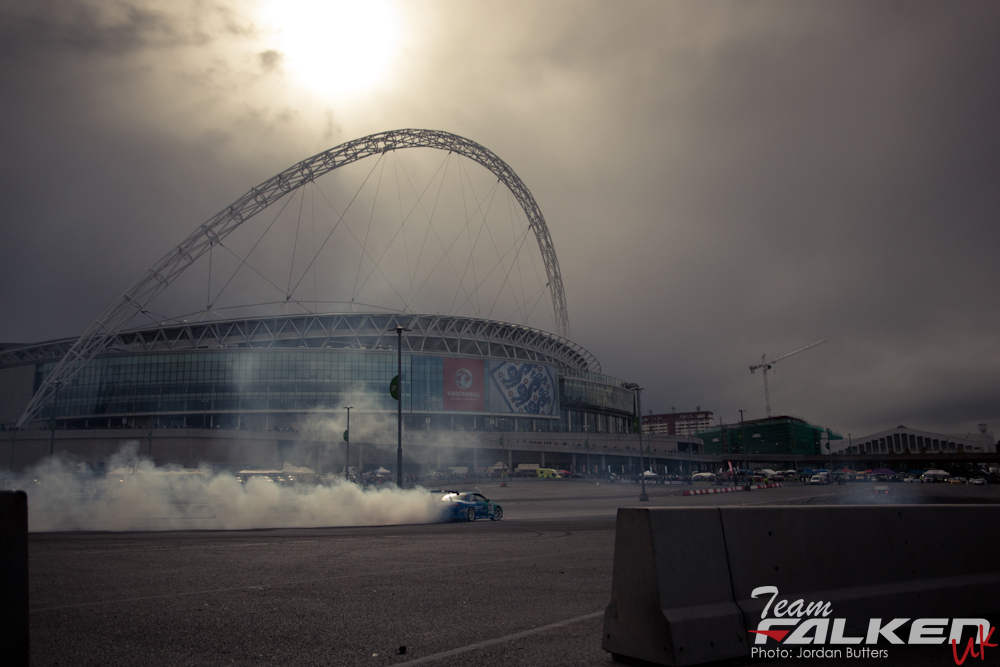 To round off our country hopping month Matt headed back over to England to compete in the Drift Allstars Final round at Wembley. 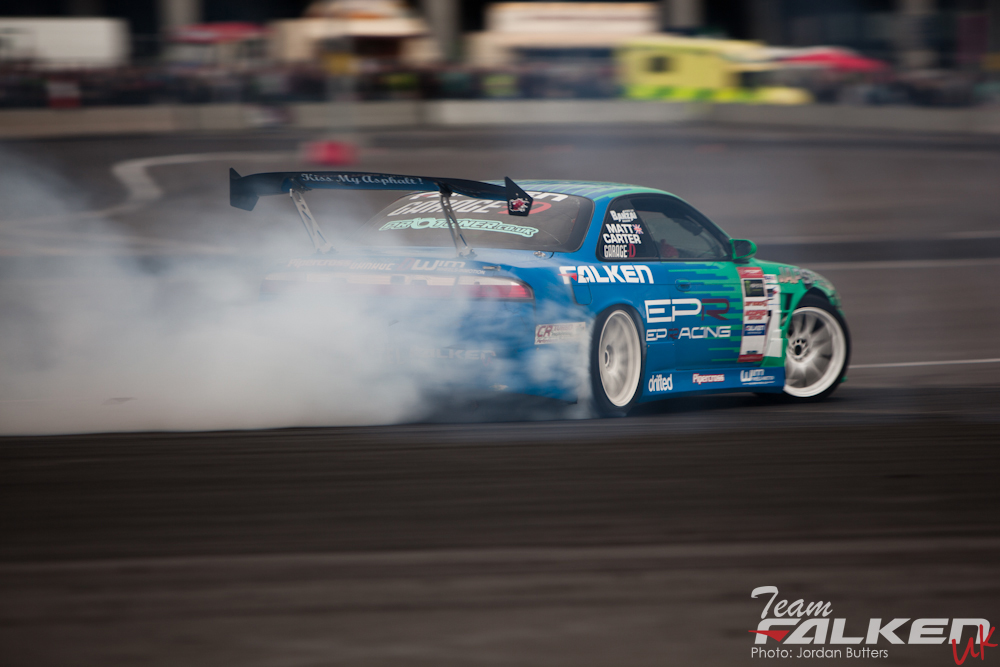 Matt would face Dai Yoshihara, James Deane and the best from Europe again in the heart of London infront of a huge crowd!

Matt’s backfiring did not go down too well with London residents who apparently reported it as gunfire! Measures had to be taken to quieten the car down so an exhaust bung was sourced and fitted.

However it strangled Matt’s 1JZ of power and caused overheating so the decision was made that the Londoners would just have to live with the ‘bang bang’ for one evening!

Matt won a bye into the Top 16 where he faced off against Michael Marshall in the MnM S15.

Michael was on form and took Matt to a One More Time, however on the final run with Matt chasing he clung to Michaels door until the last corner when he spun out! Michael went on to take second place at the event so a worthy adversary! 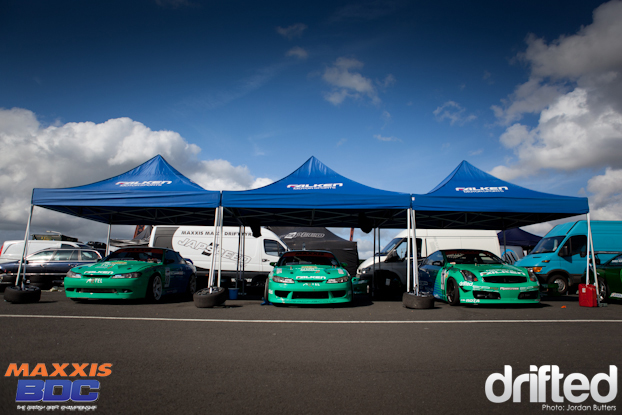 With a few days to go until the British Drift Championship final round the team are busy making preparations. 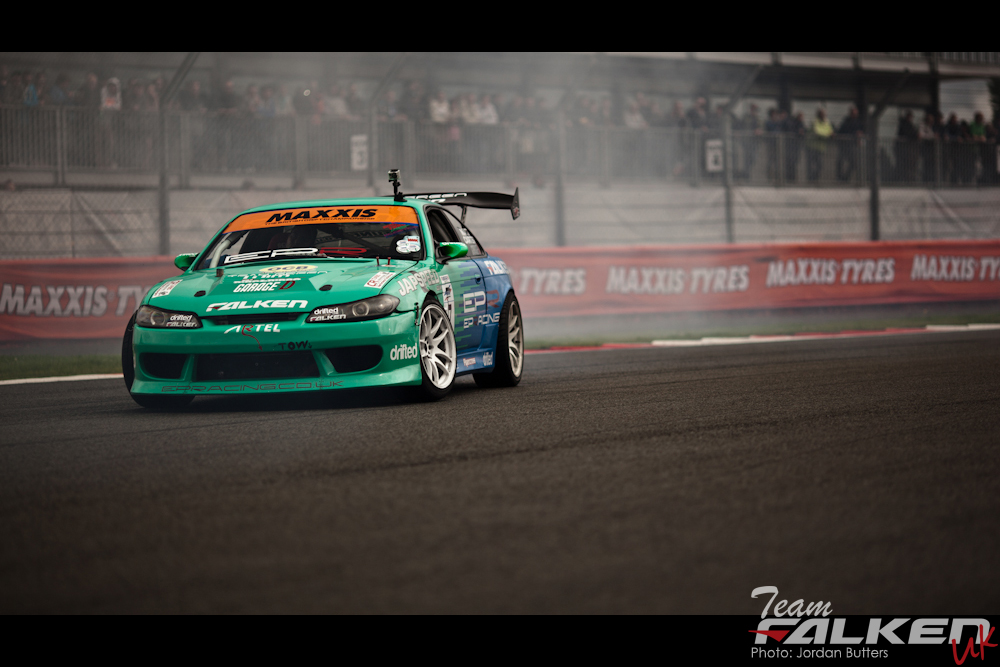 Matt has the opportunity to take the Super Pro Class title, currently leading the championship.

Championship contender Mark Luney sadly suffered an accident at work recently and is undergoing physio to try and make the finals. We wish Mark all the best in a speedy recovery and hope he can join us to battle it out for the title! 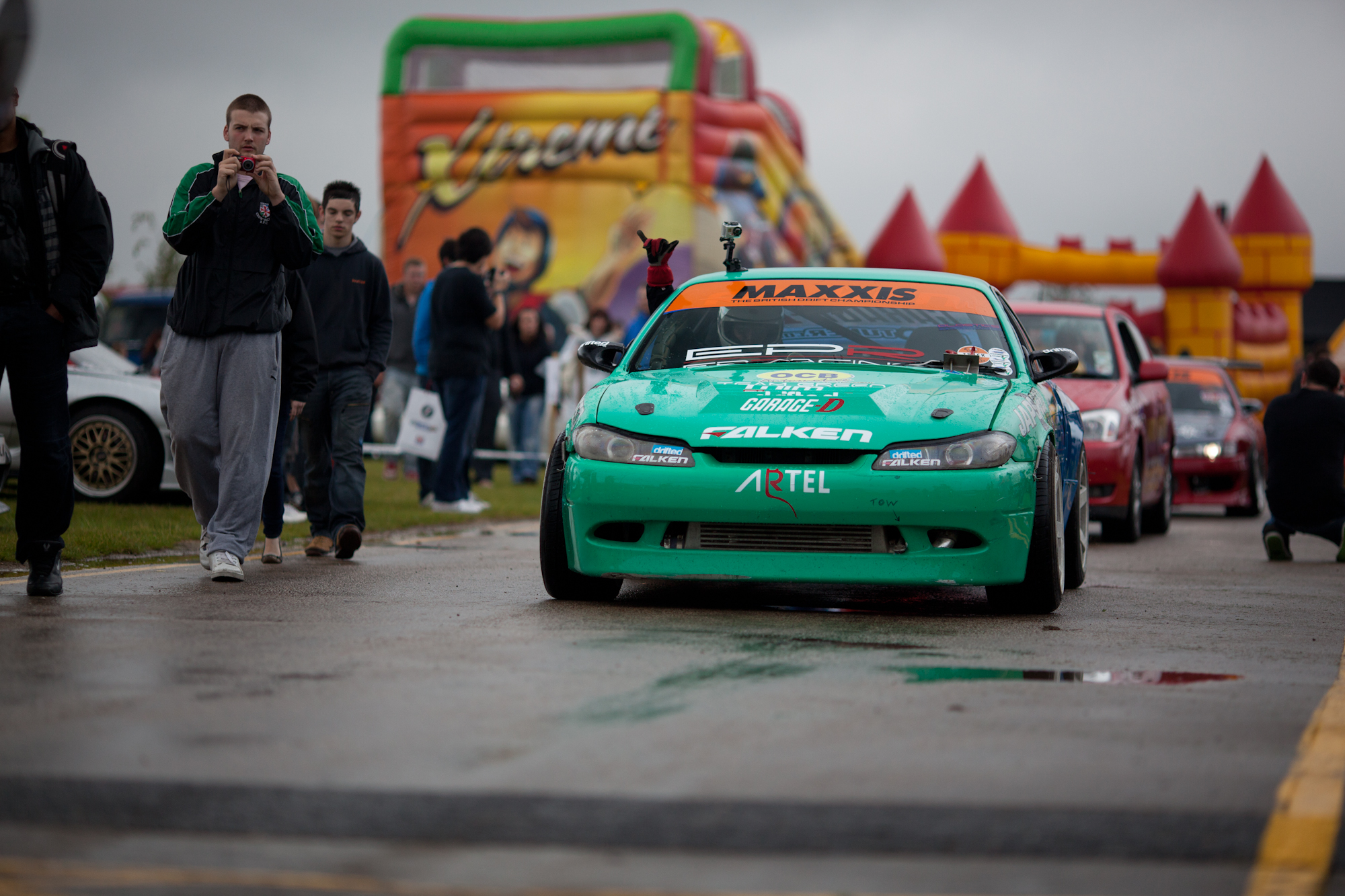 The team currently sit in 1st place in the Constructors Standings too, so a strong drive from all three drivers will hopefully see them take the title! 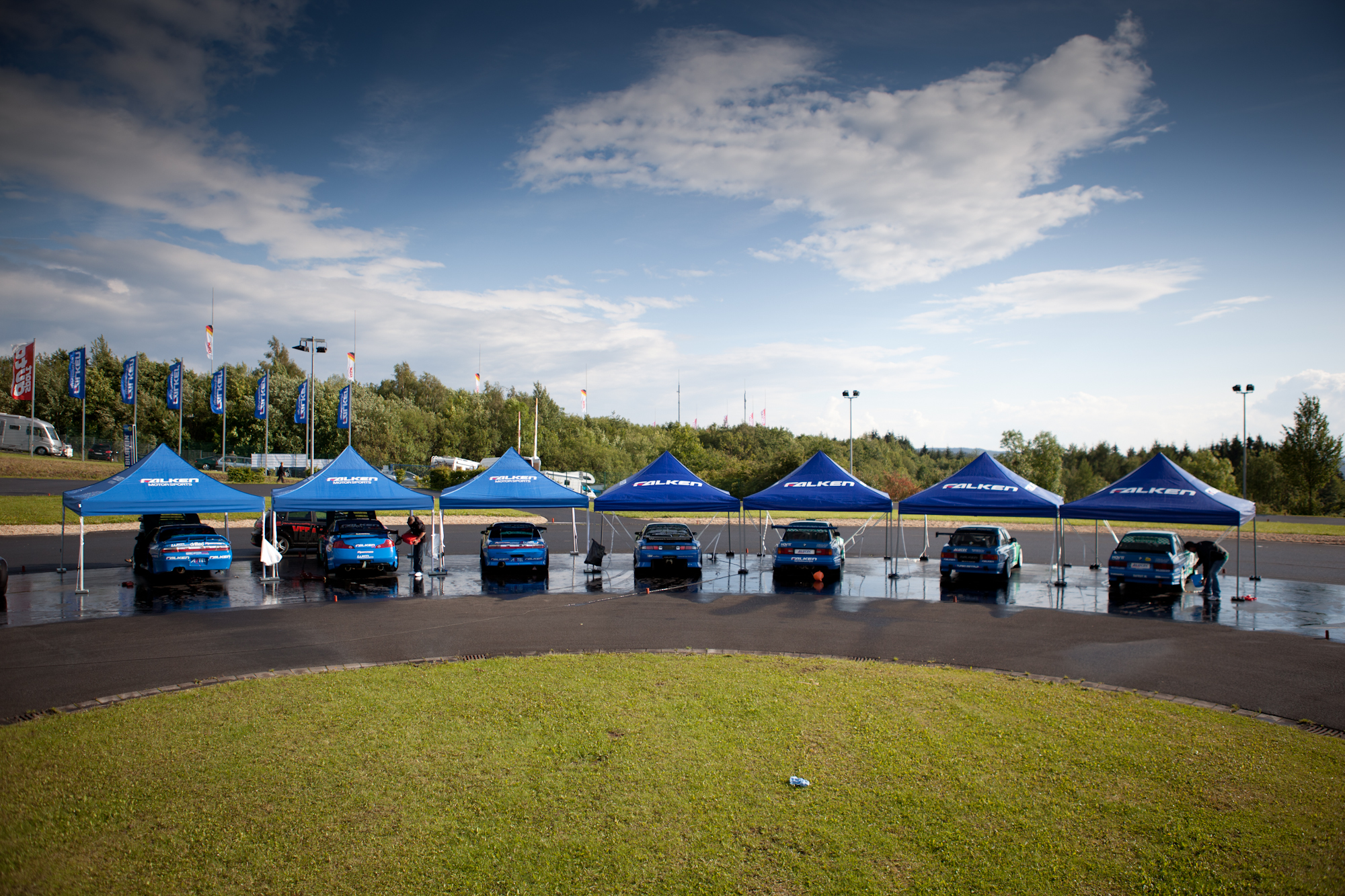 Make sure you get yourselves to Sunderland to see the Final for yourself on Sunday 25th September at the Nissan Plant, Washington, Sunderland.